This Photo Was Extremely Difficult To Construct! (17 pics)

‘Perfect Timing’ often means ‘Perfect Planning’, which is definitely the case with the ‘Ring Of Fire’ 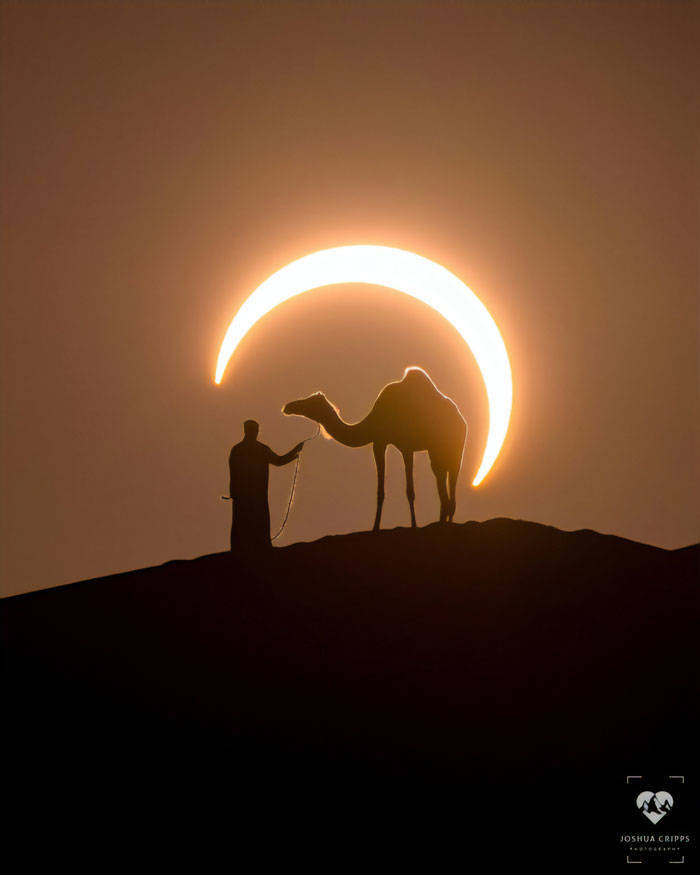 A photograph of the solar eclipse in the Dubai Desert has recently been going viral. The man behind the photograph, Joshua Cripps, was going to a photography conference when he got a tip from a friend about an upcoming solar eclipse, which Cripps just couldn’t miss:

“To be honest, it happened almost by chance,” explained Cripps. “I was already planning a trip on board the Nomad Cruise—a conference at sea for digital nomads—which started in Athens and ended in Dubai in early December 2019.”

Cripps continued: “A friend of mine runs the PhotoPills app that helps photographers plan shots and so he always knows when and where the next eclipses, meteor showers, Milky Way, and all that stuff will be, so he told me, ‘You know, there’s going to be an annular eclipse right near Dubai the day after Christmas.’ It was then I decided to stick around in the United Arab Emirates to photograph the eclipse.” 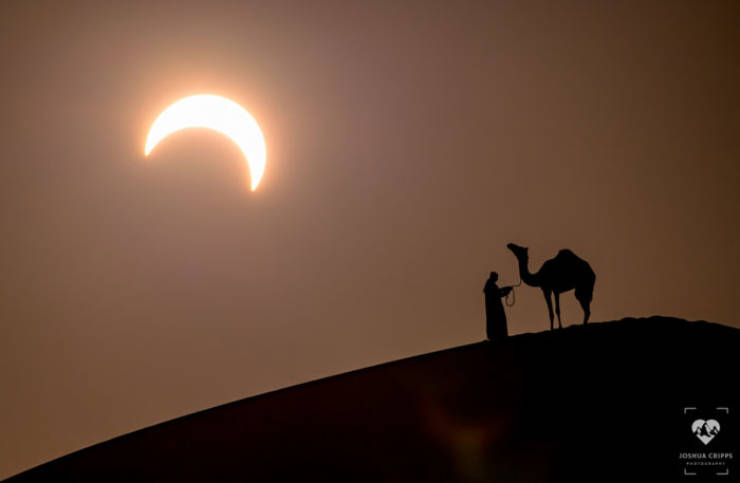 This is when the planning started. And, oh boy, was there a lot of it. Everything from the timing and positioning to the overall composition and organization of the models had to be meticulously planned to a T:

“The distance and elevation were driven by two separate things,” elaborated Cripps. “The 6.15 degree angle was dictated simply by the sun and moon position at the time of eclipse. From where I was standing when the eclipse was at maximum totality, it would be 6.15 degrees into the sky—the information I got from the PhotoPills app.”

“For the shooting distance, that was dictated entirely by my vision of the shot,” he continued. “I knew I wanted the eclipse to encircle the man and the camel. A man and a camel standing next to each other are a little less than 3 meters across. So I needed the sun to appear to be about 3 meters wide in the photo.”

Joshua Cripps, the man behind the photo, explains that it needed crazy amounts of planning 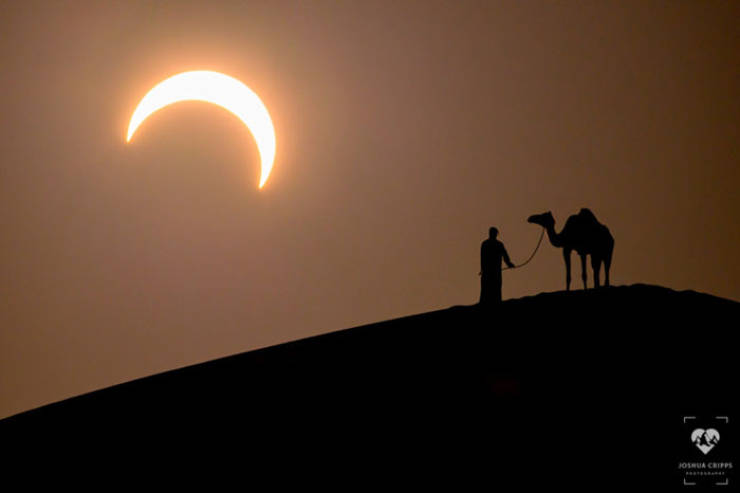 Before you go asking the question of what kind of mathematical wizardry Cripps employed, he explained a basic mental-math method: “There’s a calculation for this called the rule of 100: take the size you want the sun to appear and multiply it by 100, and that gives you the shooting distance. So, to get a 3-meter sun, I needed to stand 300 meters (roughly 1,000 feet) away from the camel.”

Besides that, Cripps had to decide on the subject of the photograph. It had to be something representative of the sands, things like Arabian horses or oryxes. He eventually settled on a farmer with his camel.

Also, it didn’t help that Joshua had a very specific vision for the shot. The composition he sought for was to be a camel and a man standing on a sand dune encircled by the eclipse. The man and camel had to turn out as silhouettes, all the while still reflecting a little bit of flare around the outlines.

The timing, positioning, angles, composition & models had to be carefully planned to a T 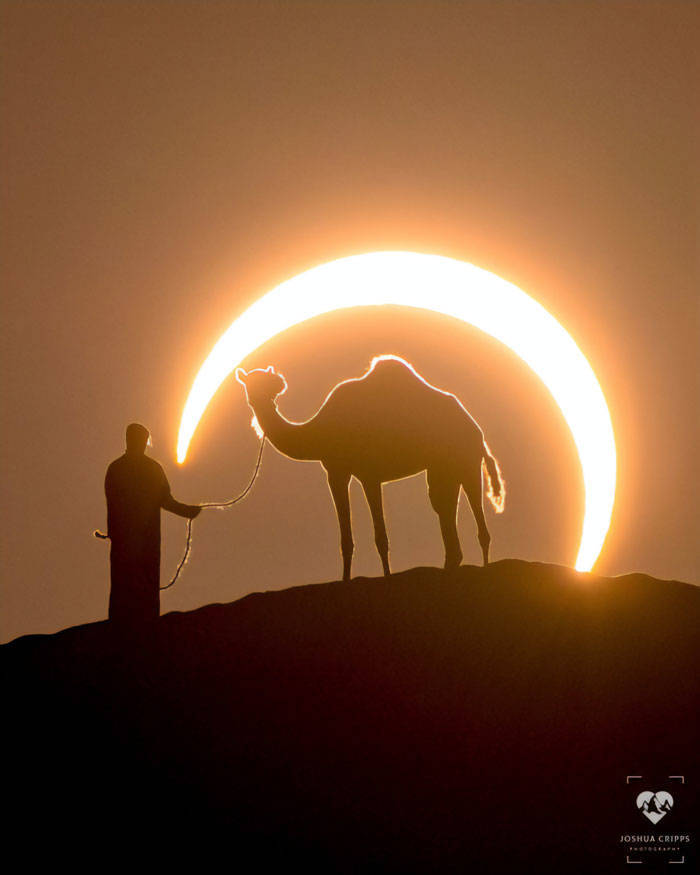 We asked Cripps why this specific location of all places? He said this: “The idea to head out into the desert specifically was driven by the eclipse itself. Even though the path of totality went through several countries, there were several reasons why it was shot in the Dubai Desert.”

“Second, dry weather. Shooting in the desert meant a better chance for clear skies than shooting somewhere tropical like the Philippines.”

“Last, interesting subjects. After doing a bit of research, I came up with a list of things I thought would make for a striking subject—something that is both representative of the region as well as something that would look aesthetic in the photo. That list included mosques, Bedouins, sand dunes, and animals.”

After weeks of planning, Cripps had ~23 minutes to take the perfect shot & made over 130 attempts 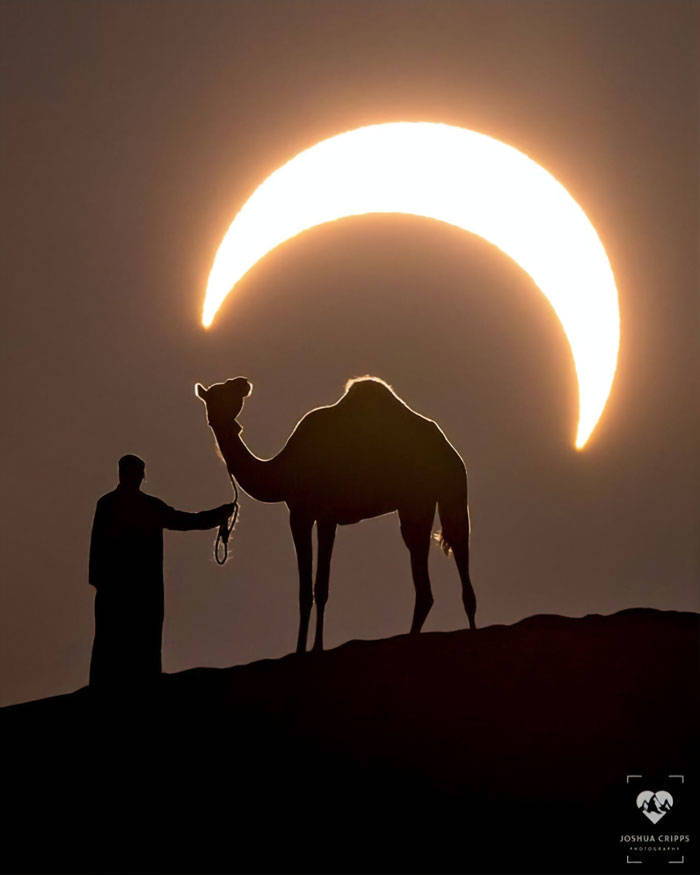 Pulling this off was a challenging feat, for a lack of better words. The most challenging, however, was the planning itself: “The planning part was by far the most challenging—specifically for a photo like this, the trick was measuring the distance and angle between me and the camel. My measurement of the height of the dune where I put the camel had about a 10% uncertainty, and in fact the dune was taller than I calculated.”

He continued: “This meant the moment of totality wasn’t visible behind the camel from my location. Normally, you can easily fix this by backing up a little bit but in this case, it wasn’t possible because of a geometry issue with another dune behind the camel. So, yeah, I’d say the planning is the hardest. Either that or the anticipation of waiting to see if I made the plan correctly or if I screwed everything up.”

Cripps also had to wait several weeks for the eclipse, which he used for planning 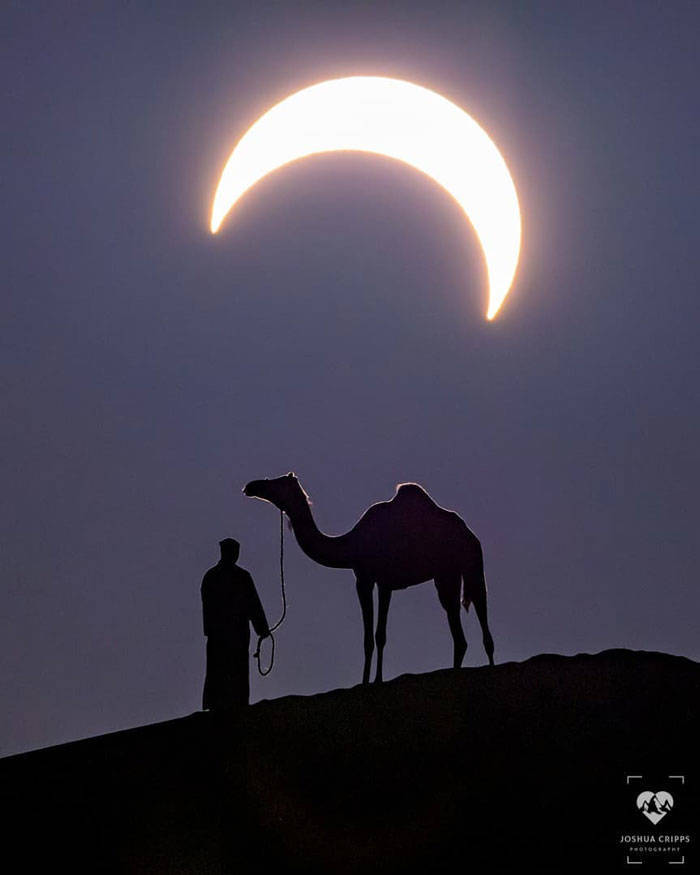 Lastly, there’s the technical aspect. After all, using a phone camera would certainly render different results, especially if the eye of the beholder is also the eye of the photographer. Here are the specs of Cripp’s shot as stated by Nikon USA :

You can imagine the amount of shuffling needed to get the perfect alignment, as seen by the footprints 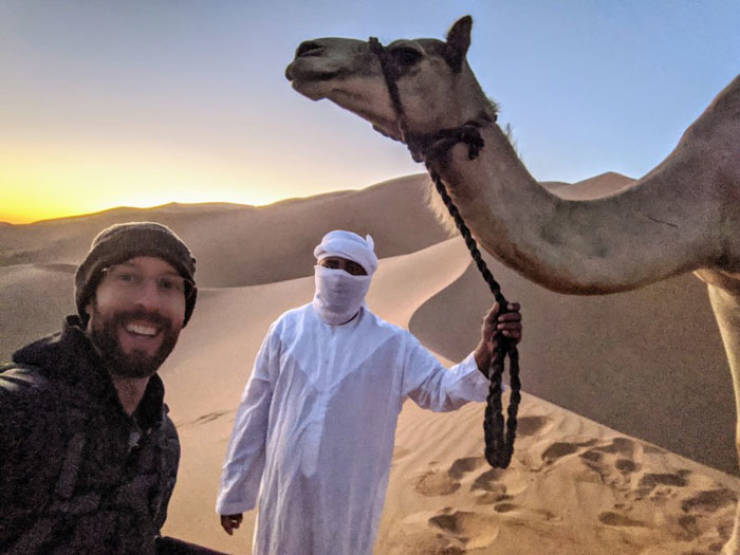 Finally, we asked Cripps if he could share some of his plans for future shots. He had this to say: “I love shooting the full moon, and I try to do that every month using the same process: figure out something cool to put the moon behind and create a plan to pull it off. So I’ll be shooting that all year. There’s another annular solar eclipse in June which I’m thinking about, although the timing isn’t great for me for other reasons. And lastly, there’s a total solar eclipse in South America in December which I’m planning to shoot. But the idea I have for that one, well, that’s my little secret.” Definitely something to look forward to! 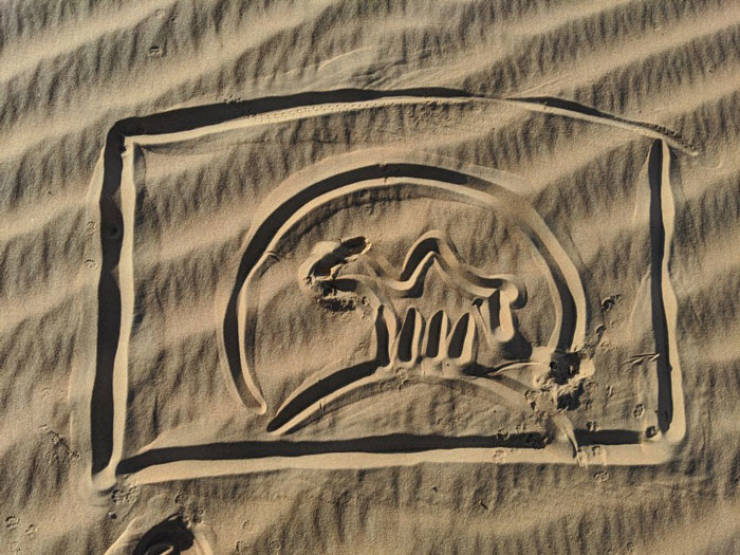 The eclipse wasn’t the only thing he took photos of, so here are some desert shots for you to enjoy… 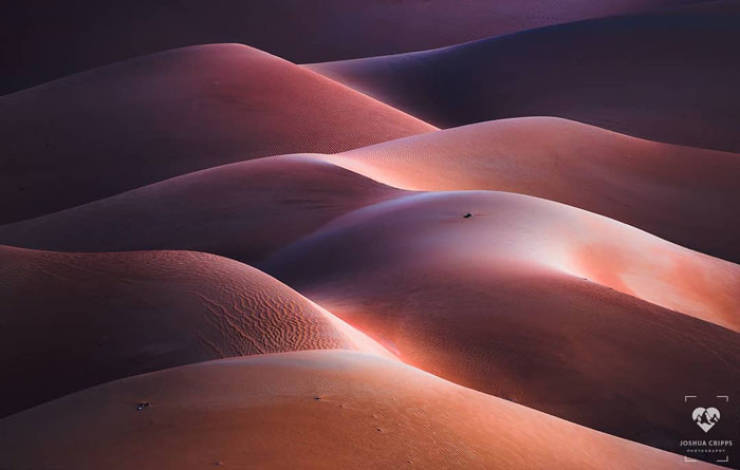 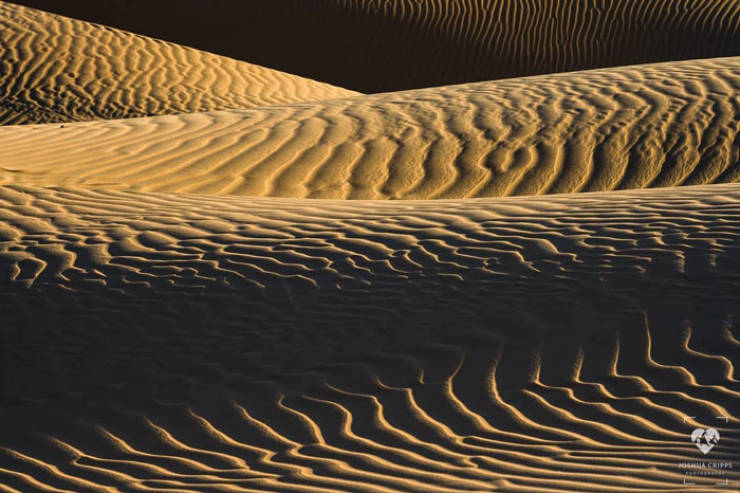 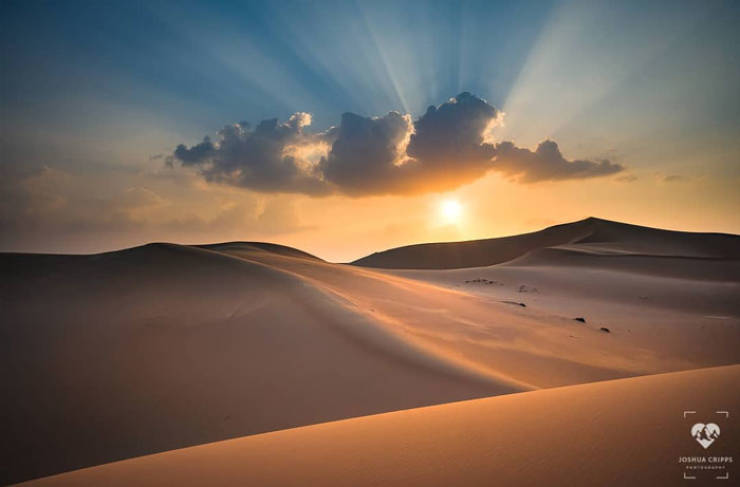 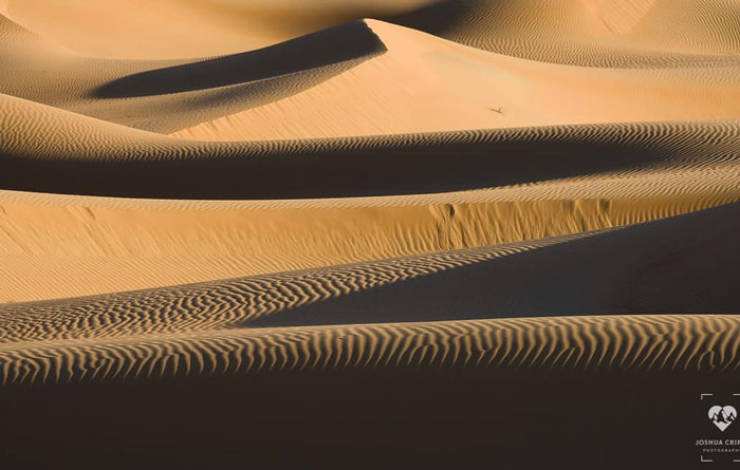 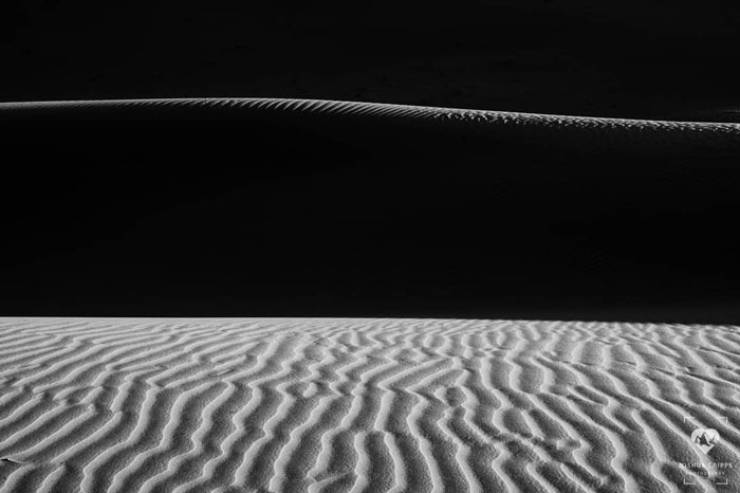 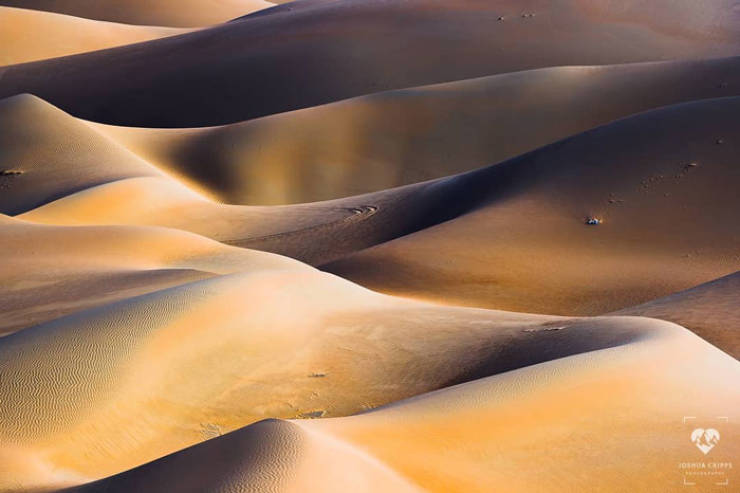 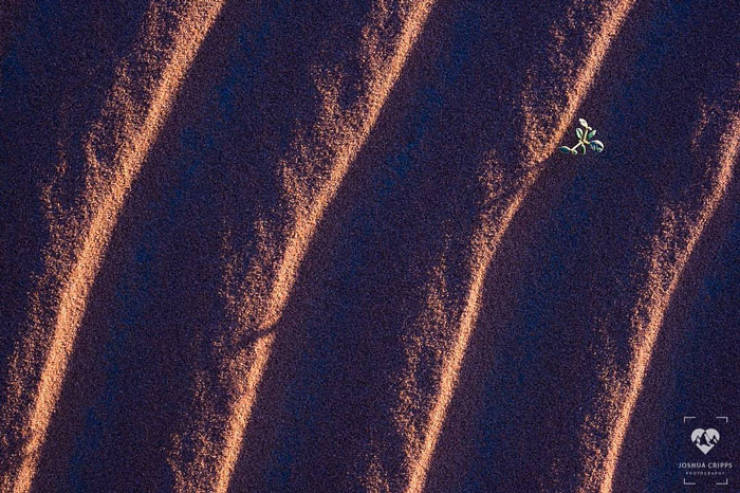 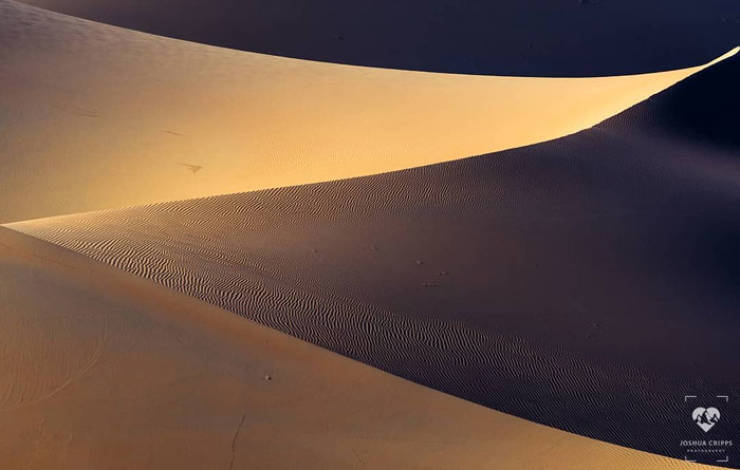 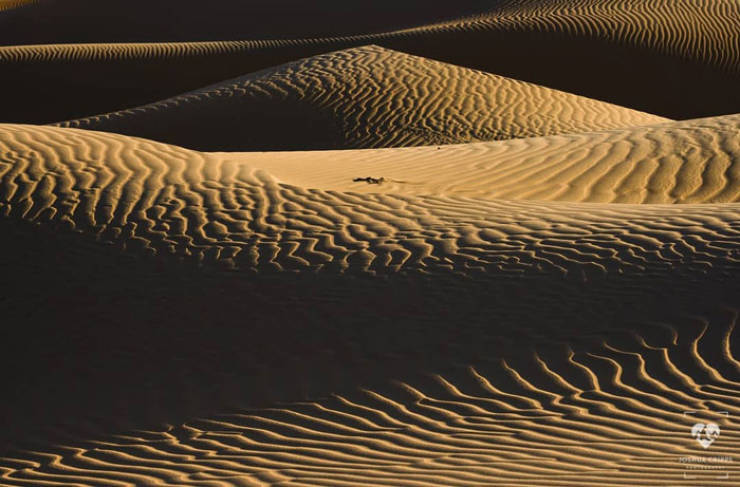