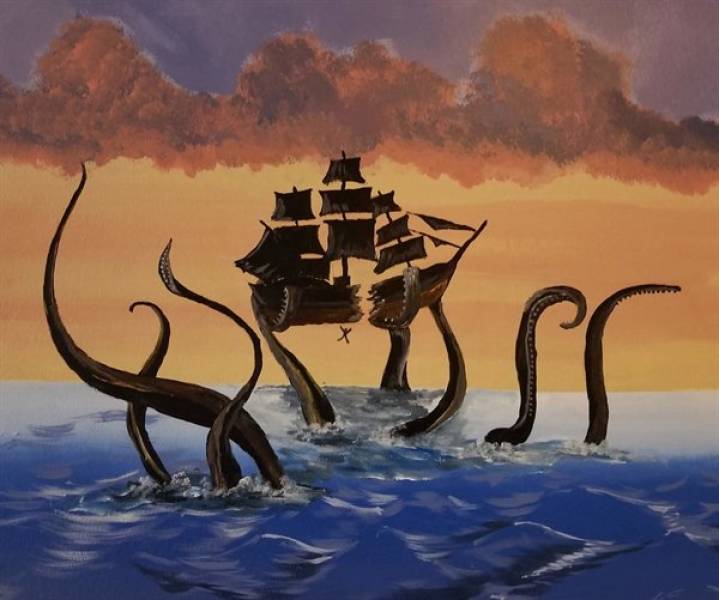 There is no shortage of sea-dwelling monsters when it comes to mythology. The Kraken, however, just might be the most notorious. Originating as a giant fish known as ‘hafgufa’ in Norse mythology, the Kraken eventually came to be known as a giant octopus or squid that terrorized the coasts of Norway and Greenland.

Back in the 1700s, Bishop Erik Pontoppidan claimed to have seen this beast, claiming that whenever any part of its body stuck out of the water, it resembled an island. There were several ways that the Kraken could demolish you…

One way in which the Kraken supposedly killed sailors was by using its massive tentacles to ensnare ships’ masts and drag them down into the deep dark depths of the sea. If that wasn’t terrifying enough, others claimed that the Kraken could start a massive whirlpool by simply submerging itself into the sea. Any ship and sailor within the vicinity of the Kraken would be sucked down like a toilet flush of death. 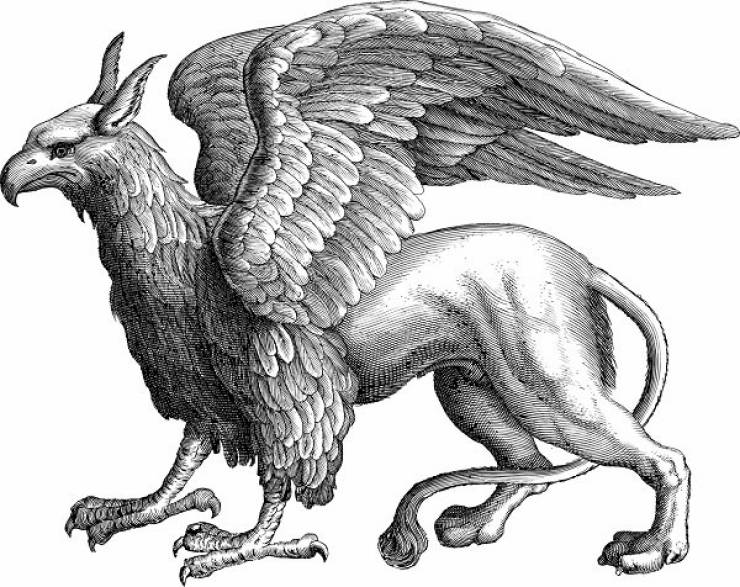 With the body and legs of a lion, the head and wings of a hawk, the Griffin is a combination of two fierce hunters. These beasts most likely have origins in Middle-Eastern mythology. Eventually, the Griffin became very popular in Ancient Greek scripts. The Legend of the Griffin found its way into a 14th-century travel-diary by Sir John Mandeville, who wrote that griffins were “more strong than eight lions” and “a hundred eagles.”

The Griffin was a mythological monster that was both revered and feared by the masses. A griffin was supposedly very regal, intelligent, and monogamous. However, they were also incredibly ferocious. Tales of Griffins spoke of them ripping victims to shreds using their razor-sharp claws. They also supposedly would carry victims high up into the sky before dropping them to their death before diving down to eat away. 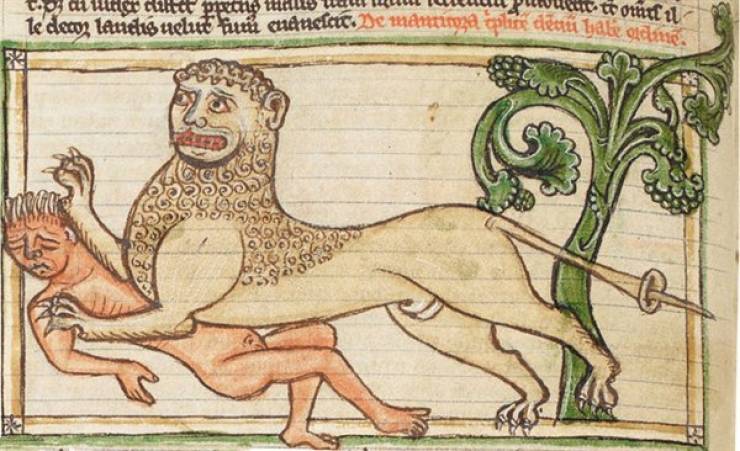 If the Griffin is a regal yet deadly creature, this thing is nothing but pure, butt-ugly evil. The Manticore was a beast that consisted of the head of a blue-eyed human, the body of a lion, and the tail of a stinging scorpion. Tales of these terrifying creatures originated in documents written by ancient Greek authors who wrote about their travels in Ancient India. According to these myths, these beasts had three rows of shark-like teeth, and they released a bellow similar to that of a trumpet.

As if their looks weren’t terrifying enough, it gets worse for us mortals. These beasts had an insatiable craving for human flesh. It was written that the Manticore would chase victims down with their insane speed before taking them down with their stinger, stabbing them until they were lifeless, before eating them entirely, bones and all. Greek writer Ctesias wrote that they were even able to shoot their stingers from a distance “as if from a bow.” 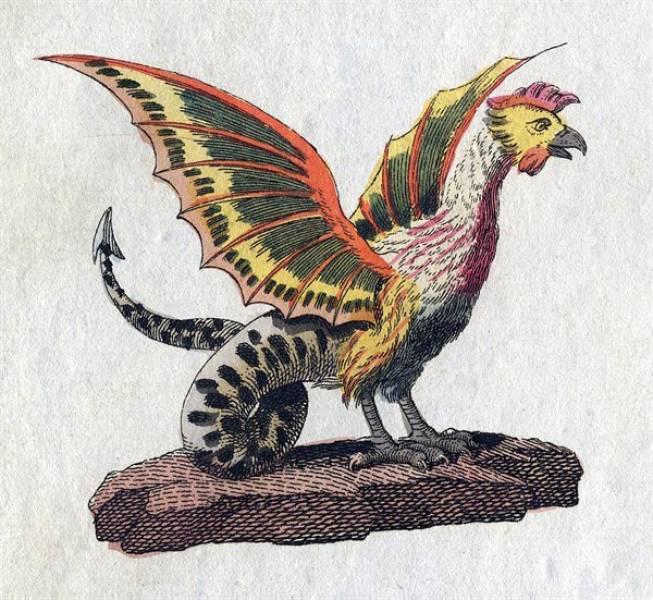 The first known records of the beast known as the basilisk come from first-century Roman writer Pliny the Elder. In his original writings, the basilisk is described as a massive snake with crown-like features on its head. Somewhere along the line, it became a giant snake with the body and head of a rooster and wings of a bat. Other than razor-sharp claws and insane strength, there were several things that the basilisk had that could kill you. 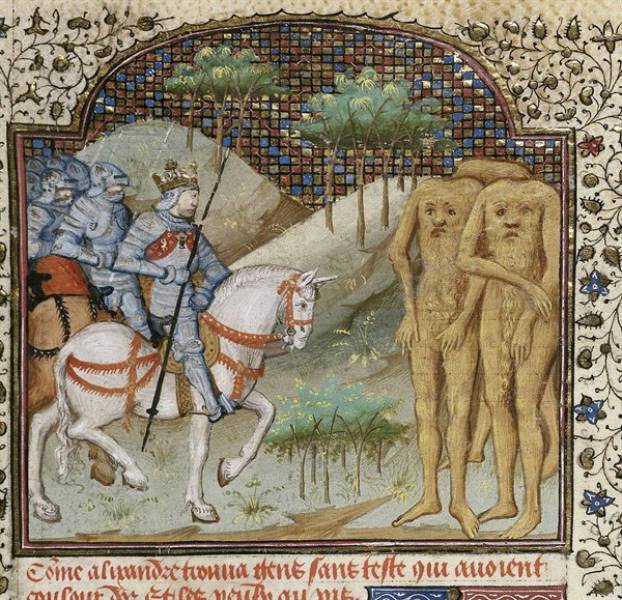 Legends of ‘wild men’ living in the far corners of the earth, such as Africa and Asia, made their way to Europe via travelers from way back in the day. One such creature that was talked about was called a ‘Blemmyae.’ These massive ‘wild men’ were headless, but their faces were on their chests. They were also hairy. The tribe first appeared in Herodotus’s “The Histories,” where they were described as a species of “headless men” from North Africa “who have their eyes in their chests.” 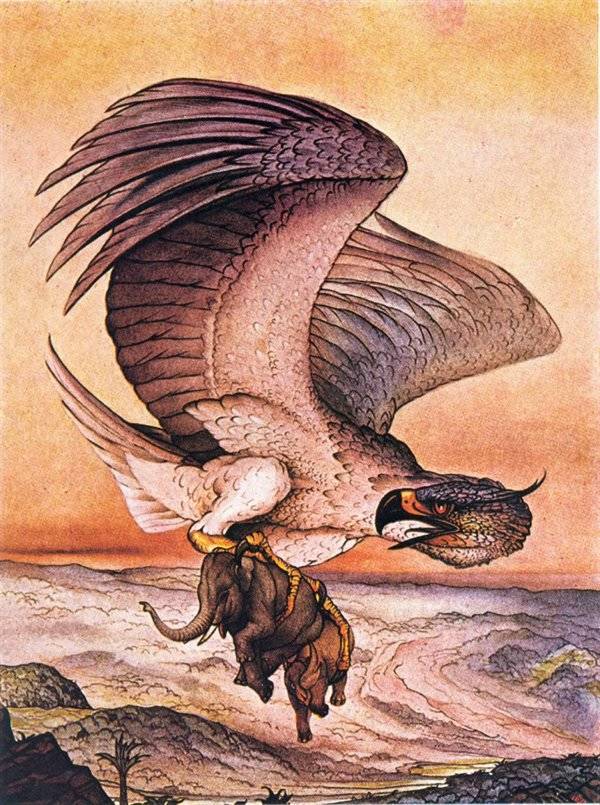 The Roc was a mythical bird that was so large that it was believed to have been able to pluck an elephant up from the earth and into the sky. The legend of the Roc has roots in Arabic tales and mythology. Eventually, these tales made their way out west through travelers such as Marco Polo. These beasts supposedly chose to kill their victims by flying them up into the sky before dropping them to their deaths and then eating “preying upon the carcass.” Ibn Batutta, noted Moroccan wanderer, wrote that he once mistook a Roc for a floating mountain because of how big it was. These birds were said to be so huge that they could blot out the sun with their wingspan.