The winning images from Agora’s #Aerial2020 competition are showcasing some of the most beautiful destinations in the world — all from a bird’s eye point of view. Dutch photographer @by_ewold beat the other 9,018 submissions to win the $1,000 prize with his mesmerizing shot “A magic morning in The Netherlands”.

Magic Morning In The Netherlands 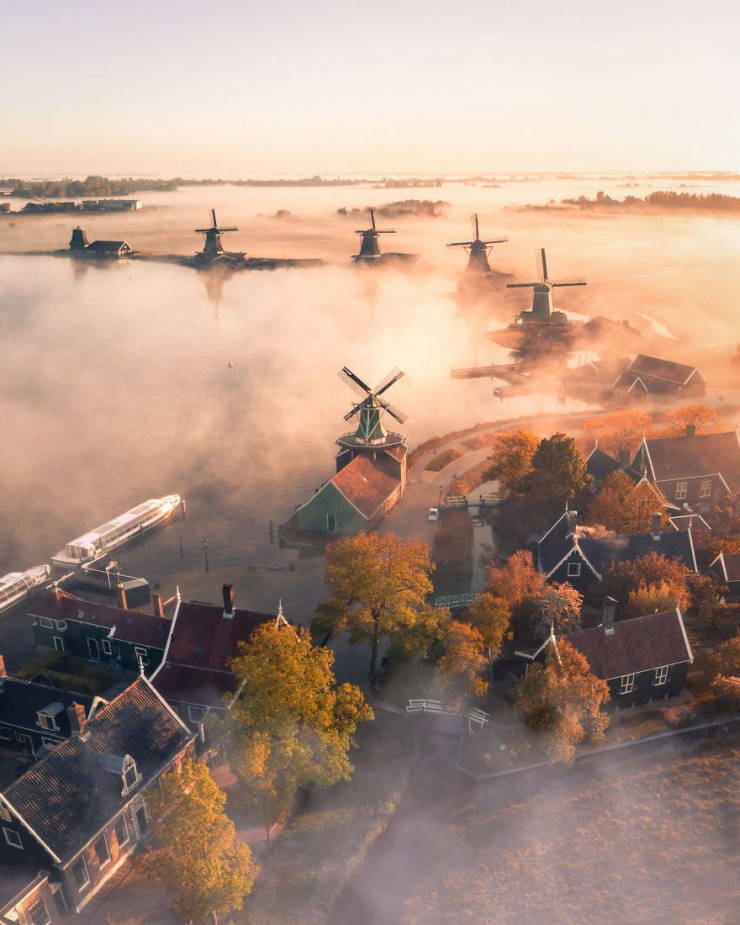 @by_ewold’s magical aerial shot of Zaanse Schans, the village with the most famous windmills in the Netherlands, gathered the highest number of votes from the global community through the different voting rounds in the app, awarding him the #Aerial2020 contest’s $1,000 top prize.

"I was waiting for a long time to capture this typical Dutch scene with low fog. And finally, on the 10th of May, the weather forecast looked perfect: no wind and low night temperatures are the ideal ingredients for low fog. My alarm went off at 4:00 am to drive to the Zaanse Schans; when I got there the fog was everywhere except around the windmills. I decided to check first some other spots, after 1 hour I came back and wow! The wind had turned and blown the fog in the direction of the windmills. I had only 50% battery left on my drone and took off to find a unique angle to capture this place. When I looked on my phone to see the drone view it was like a dream!"

Floating In The Air 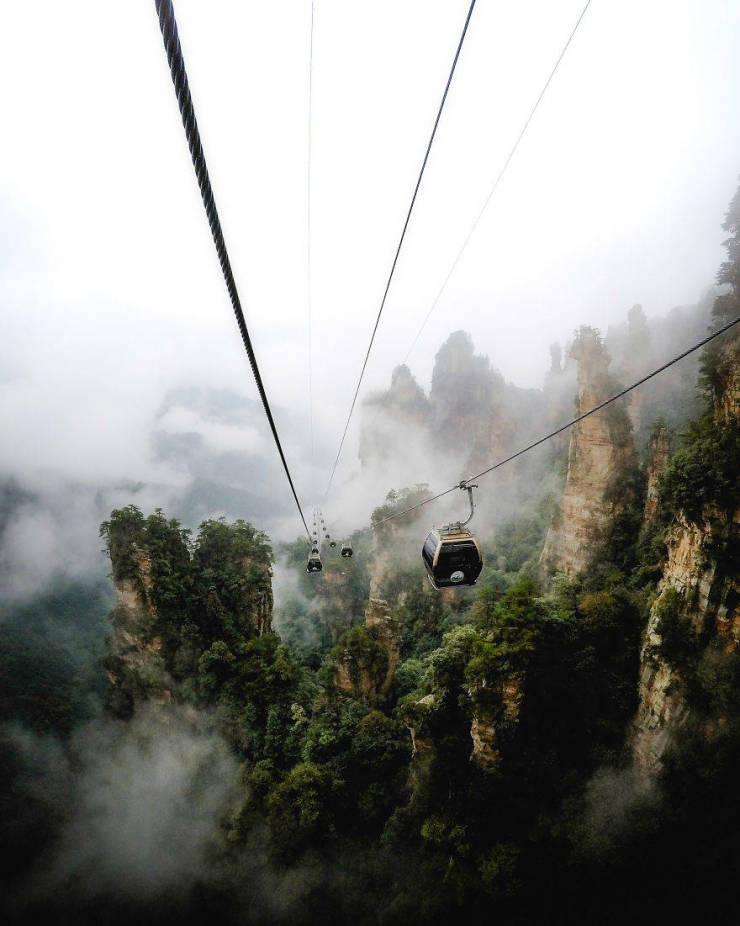 "This is a cable car ride inside Zhangjiajie National Park. Within the park, there are altogether more than 8,000 cliff mountains, towering into the sky. During our ride, it was a misty/cloudy morning which is why this scenery looks even more mysterious. We couldn't believe our eyes when we raise above the clouds and this view appeared. I wanted to capture this the best way possible, putting my GoPro through the small window because shooting through the scratched glass wouldn't turn out good at all. 1 minute later, the view disappeared again. Turned out we got lucky! I absolutely love the result and the feeling it transmits, cause when I look at this photo I get this mysterious feeling and "wow-effect" back immediately." 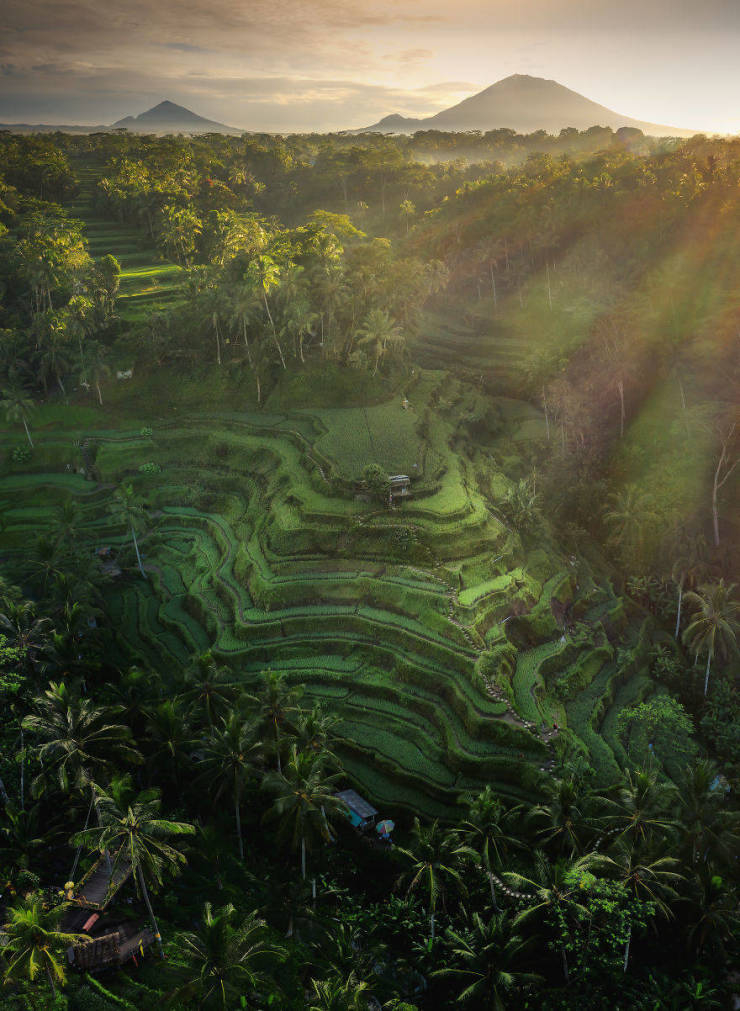 "I had to wake up at 5.30 am to take this shot. The early morning light bathing the rice terraces with the 2 volcanoes in the background made my day." 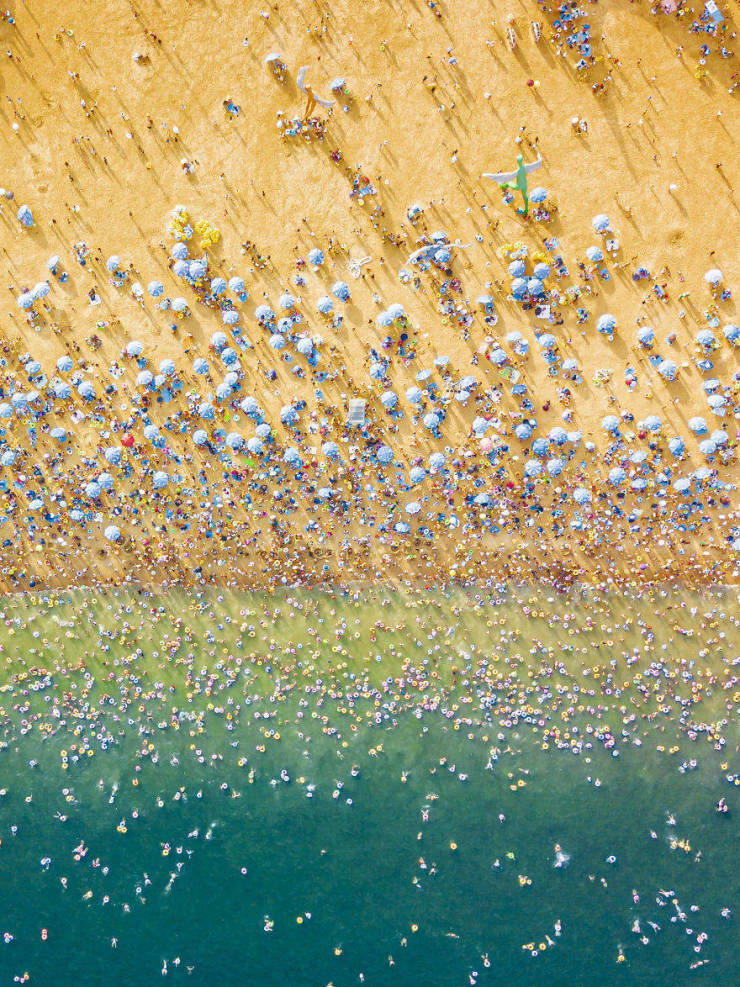 "This is a public beach next to a five stars hotel. The hotel had its own private beach right next to it, which was empty. I was initially interested in capturing that contrast. The crowd density was so high, I had to gain quite a lot of altitude to make it fit in the frame. At that point, those indistinguishable people started to create a pattern that I found even more powerful and fascinating." 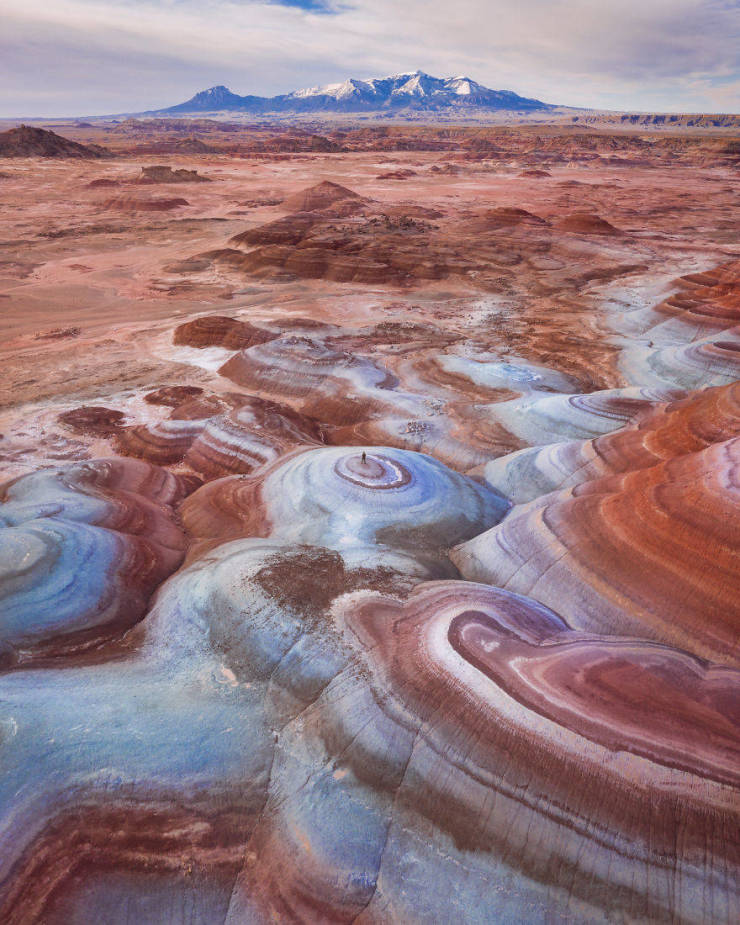 "I wanted to show that our planet has landscapes that look like they are out of this world. We don’t need to go to Mars to find these kinds of landscapes. Like in most of my photos, I want to make people realize we can find beauty on this planet. We need to take care of nature, lots of times you see that when a location gets popular, tourists overcrowd the place and basically ruin it. If you decide to visit these kinds of places just leave nothing but footprints!" 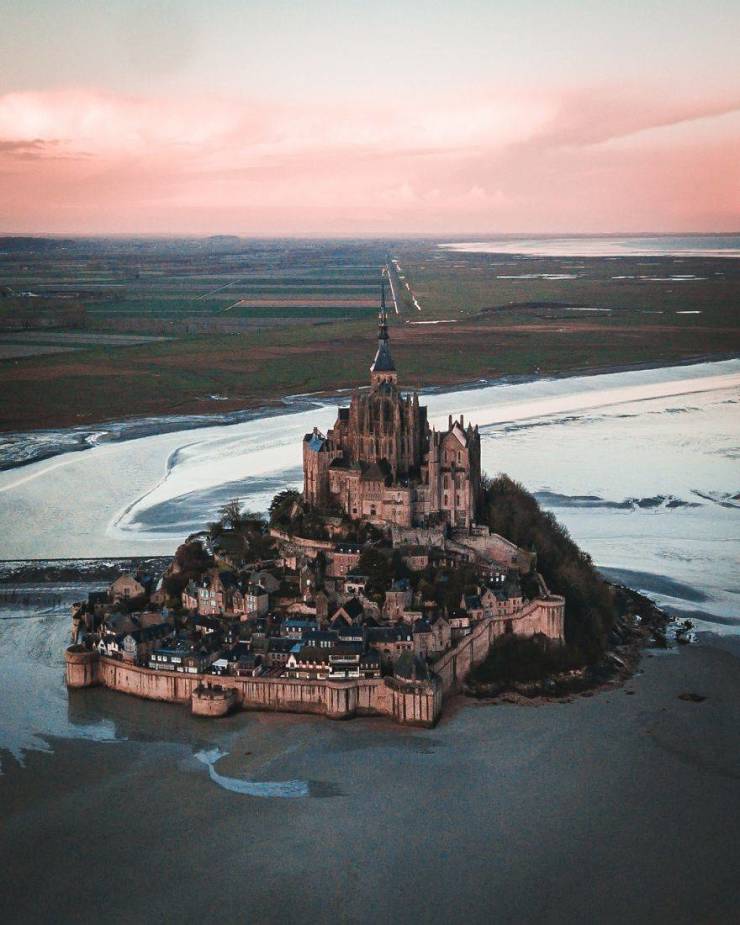 "One of the most beautiful places I've ever seen: it was a cold sunrise, but certainly worth it. On top of the rock, you can see a church overlooking the village of 70 residents. The strongest tides in Europe rule here, with the water going back kilometers." 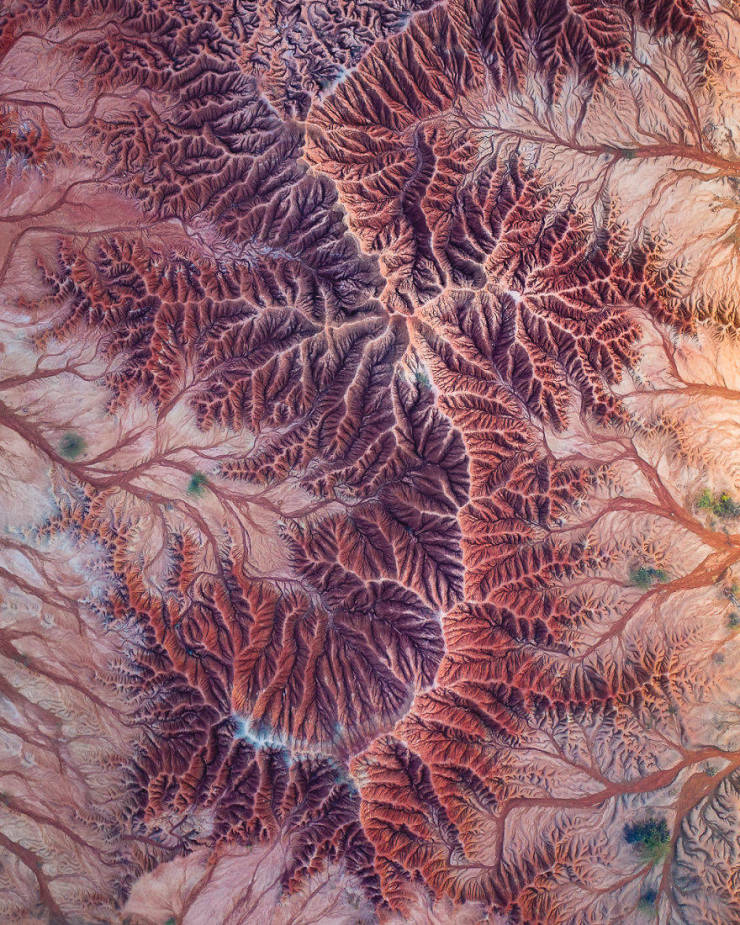 "On this ancient rock formation, you can see how the drought slowly scraped out these patterns and structures. Imagine the time that has been needed to create this. Layer by layer... that's just mind-boggling. You'd expect that this is a huge mountain range, but look at the green trees for scale reference..." 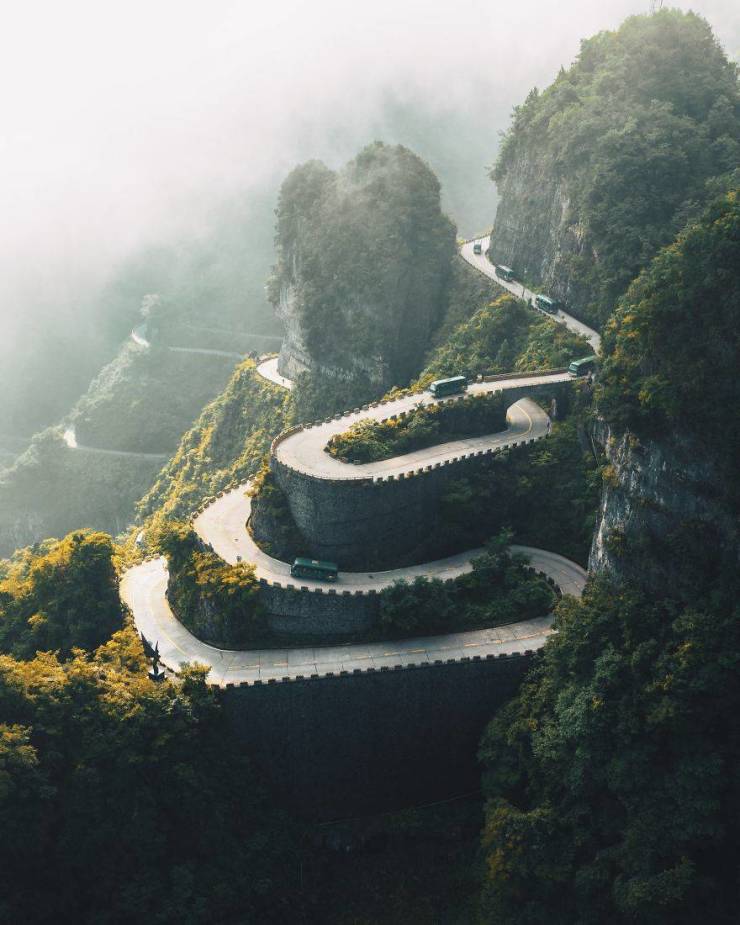 The Rock In The Middle Of Nowhere 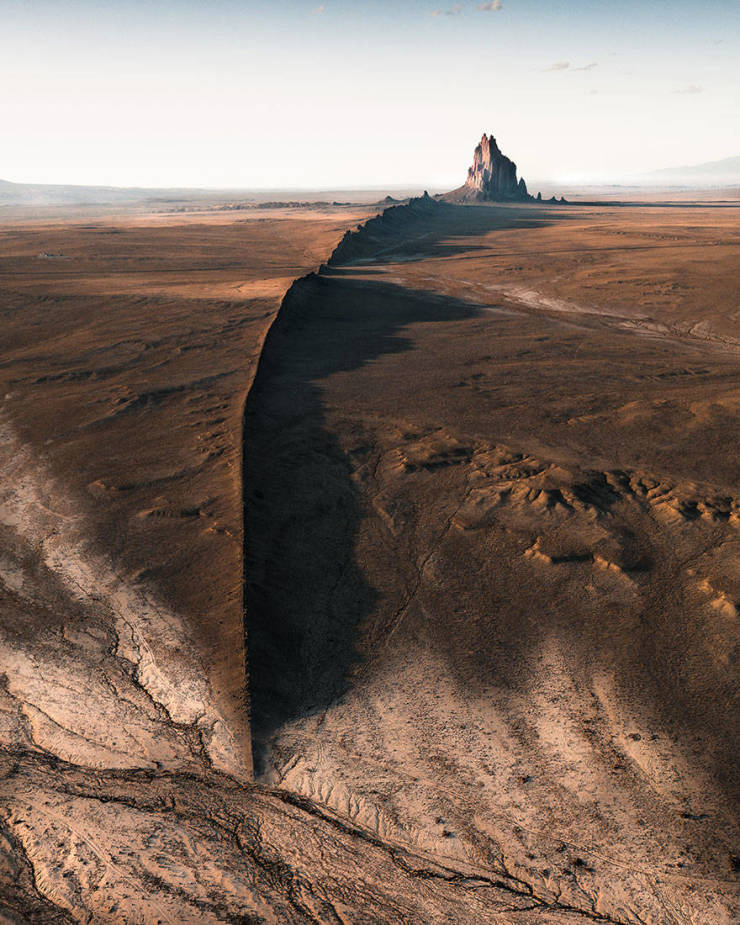 "This has to be one of the highlights of my US trip. Shooting this rock with the drone was pretty epic, I had to fly it directly into the wind for 3km to capture this." 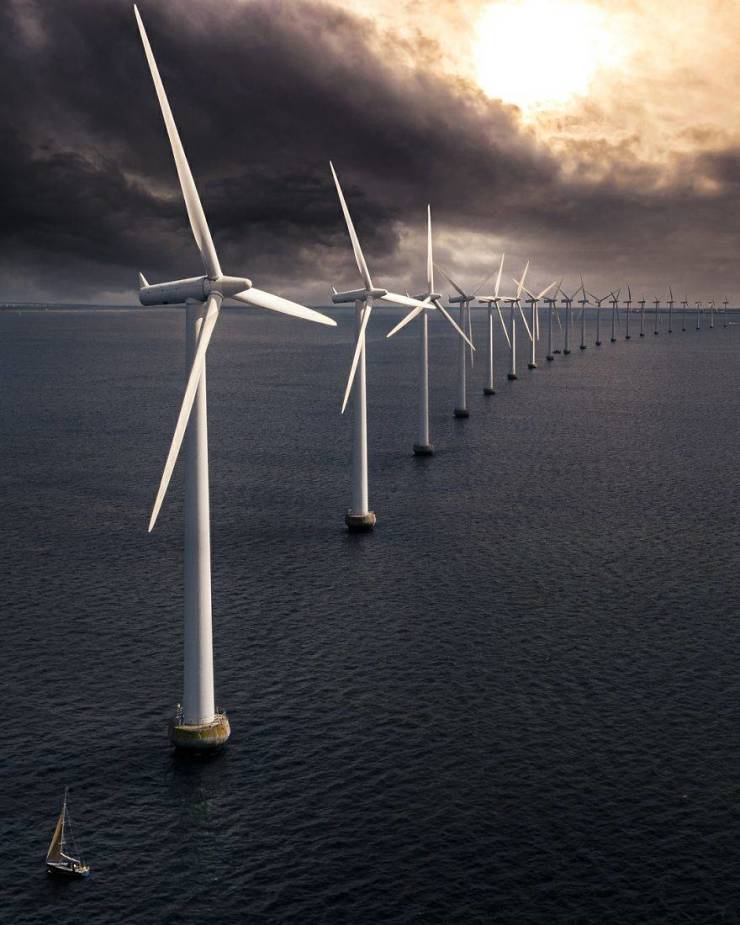 "See the sailboat for scale!"

Fortress Of The Dragon 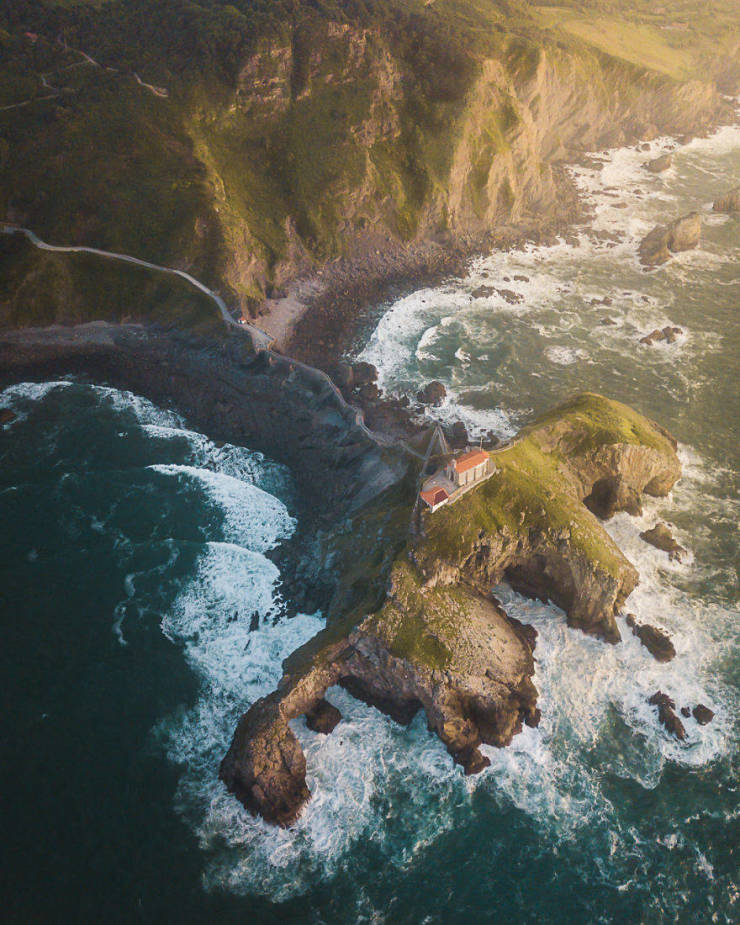 "A tiny island joined to the mainland by a bridge clung to rocks and stacks; one of the best places I’ve ever visited! That day was super windy, I flew my drone about 3 km away to get this shot and I was so worried that I would never see it again! Fortunately, it came back and it was definitely worth it."

Racing The Tide To Safety 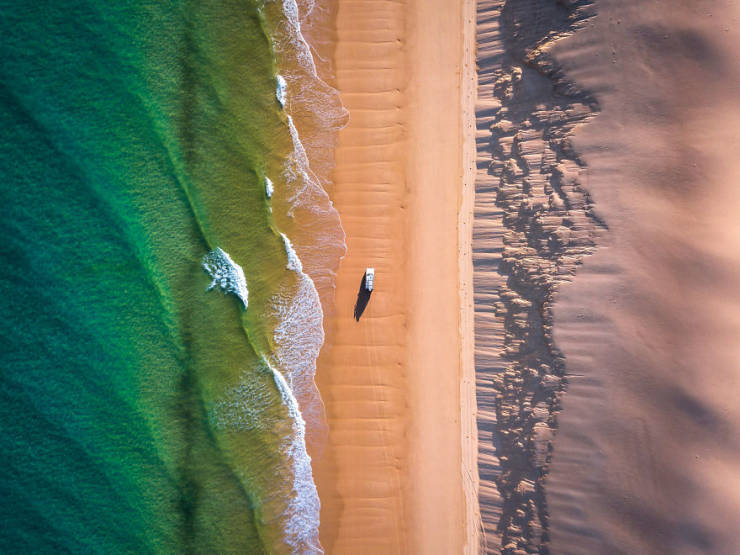 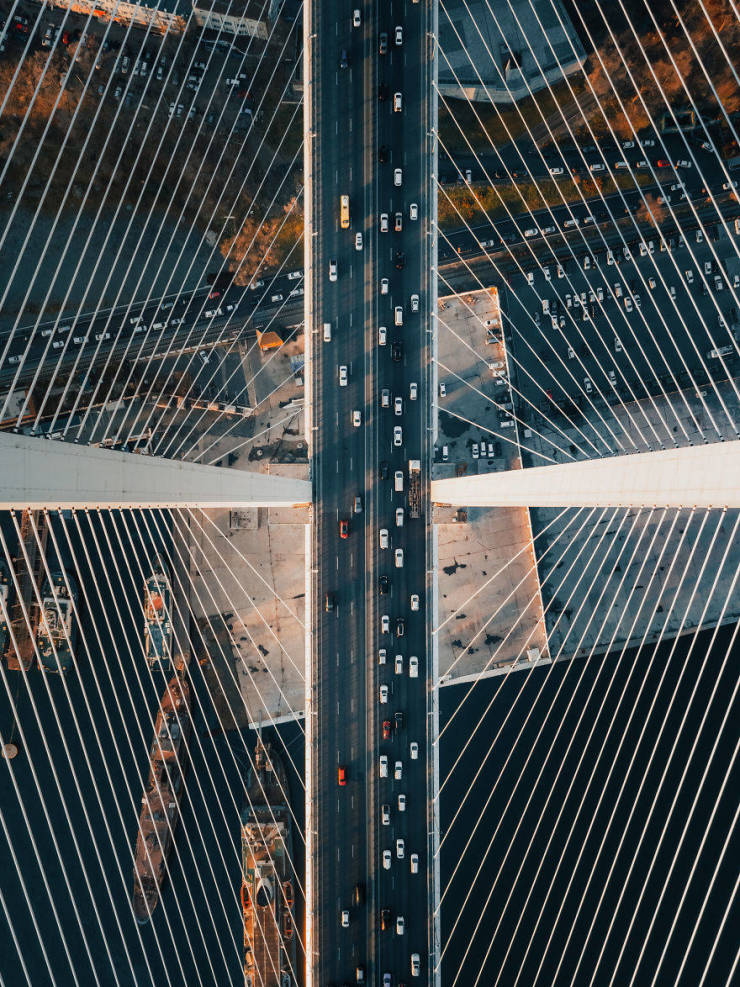 Bangkok Market From Above 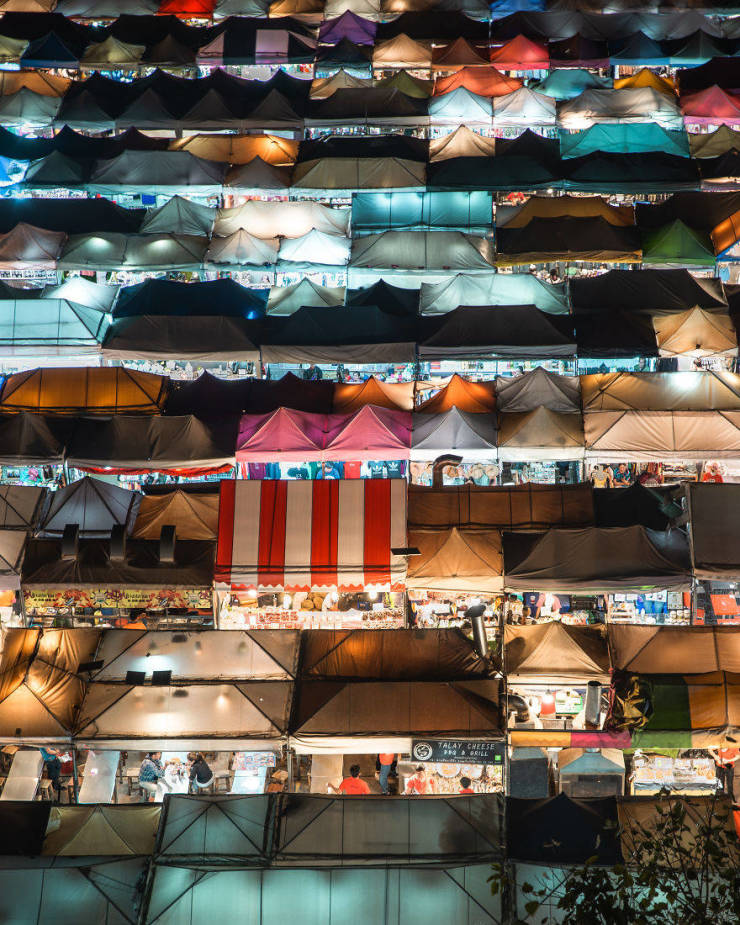 "Nearby this market was a parking garage. We climbed almost to the top and were amazed by its beauty from above. The lesson to learn from this photo: if you're in a place to do some photography, don't just stay at the location itself. Do some research beforehand and look around the area to find unique points of view." 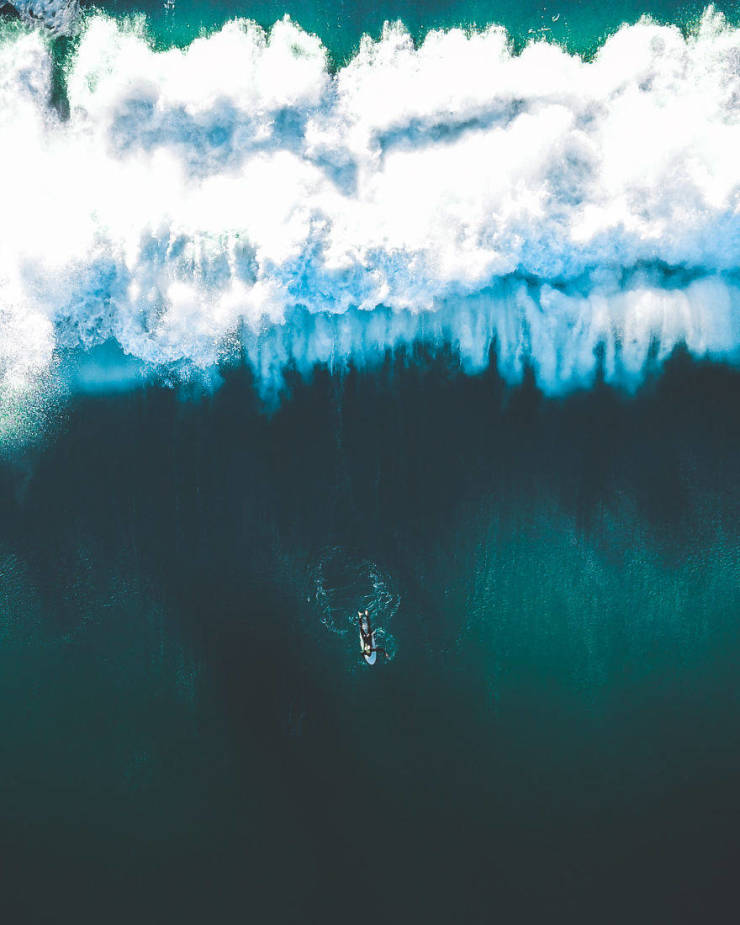 The Mood In The Mountains 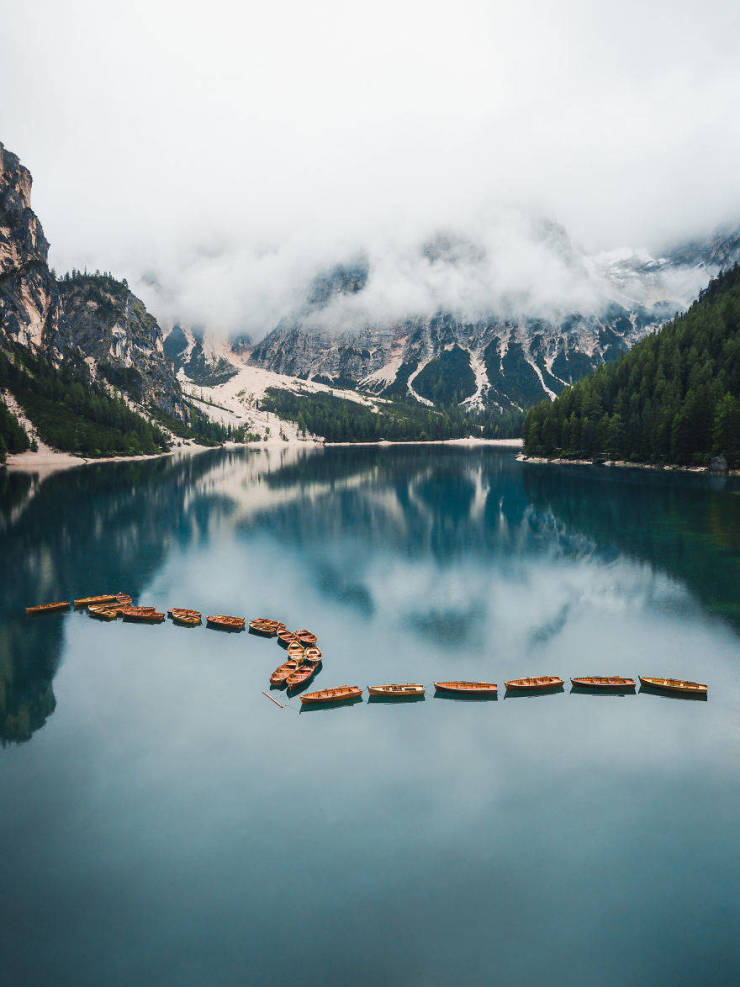 "The Dolomites area is full of picturesque landscapes, and no trip would be complete without a visit to Lago di Braies. I arrived in hope of a sunset but that did not happen; instead, I was greeted with some moody conditions with loads of low clouds. I enjoy shooting in challenging conditions and I was still determined to get some shots of this beautiful place." 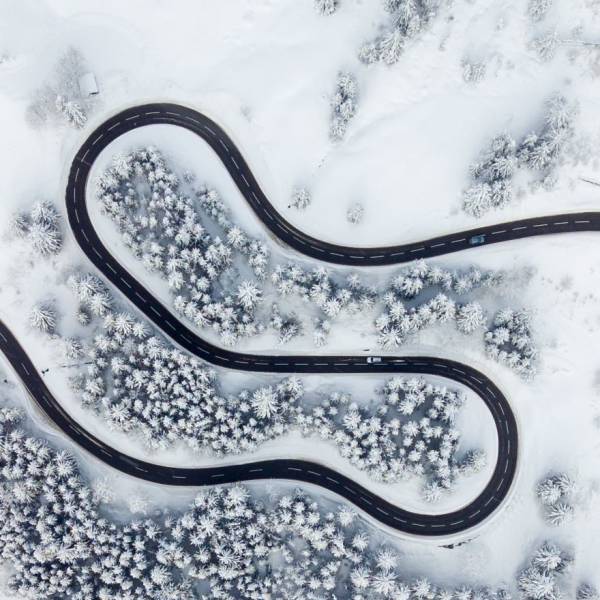 "It was such a cold day. There was fresh snow and I wanted to take my dream shot. A lot of people around the world have never experienced snow so I wanted to show them the beauty of winter through my photo."

Lost In The City 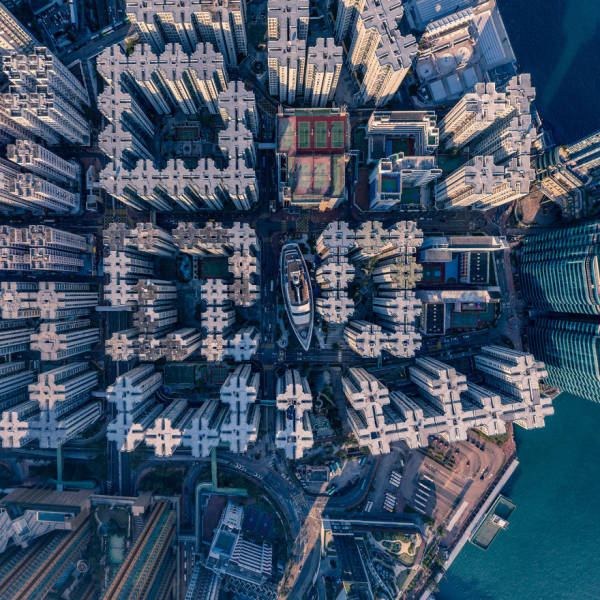 "This is one of the weirdest sceneries I've ever imagined. Yes, it is a shopping center, but from above it looks like a boat in the middle of countless identical residential blocks." 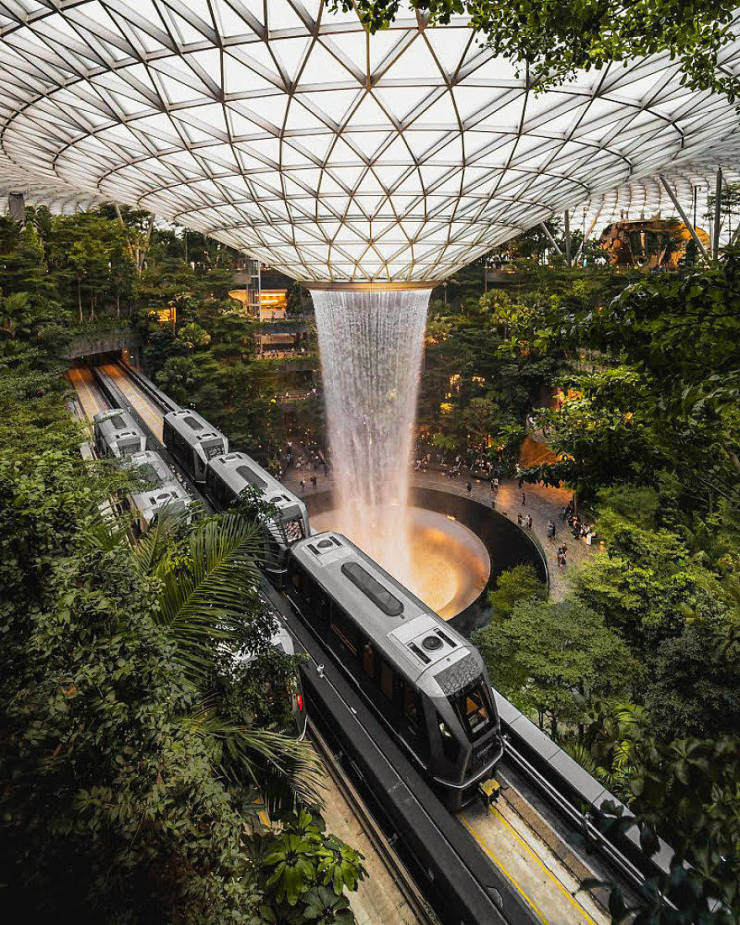 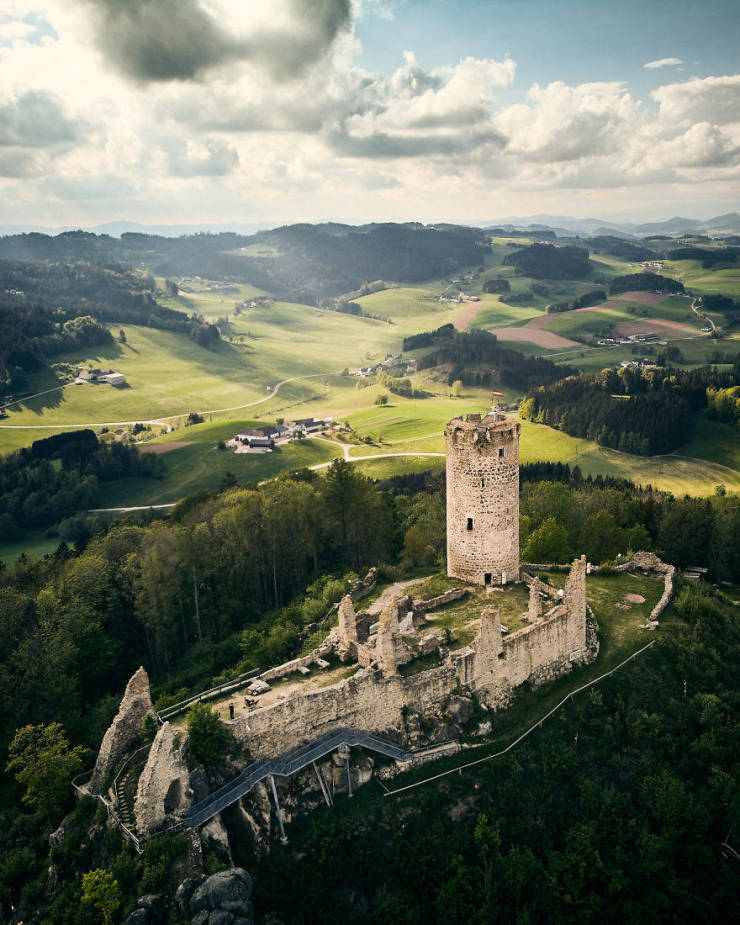 "This region has so much history and a lot of old castles! This castle was built around 1100 a.d, and I find it really impressive that there is still so much left off these old buildings." 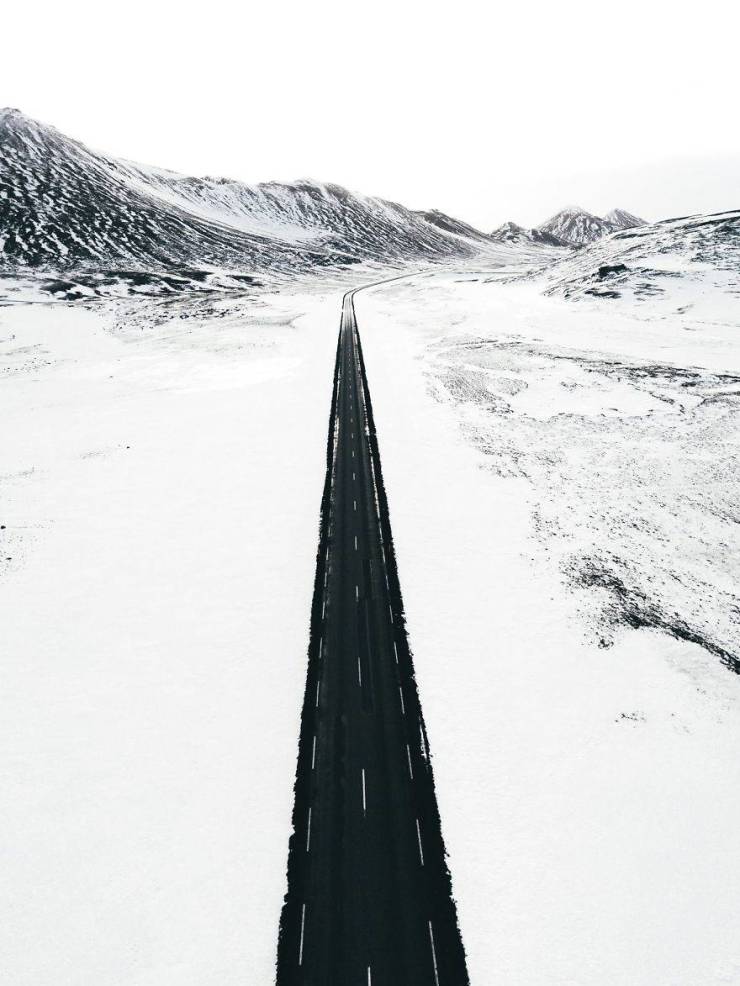 "When you're exploring new terrains for the first time, you're not really sure what's around the corner—particularly the weather. This was a calm before the storm moment when the snow had settled and left miles around blanket white. Driving the sub-arctic, North of Iceland in winter is no mean feat with snow blizzards, whiteouts, and weather fronts that appeared from nowhere – have never seen the weather change so instantly… incredible, but keeps you on your toes." 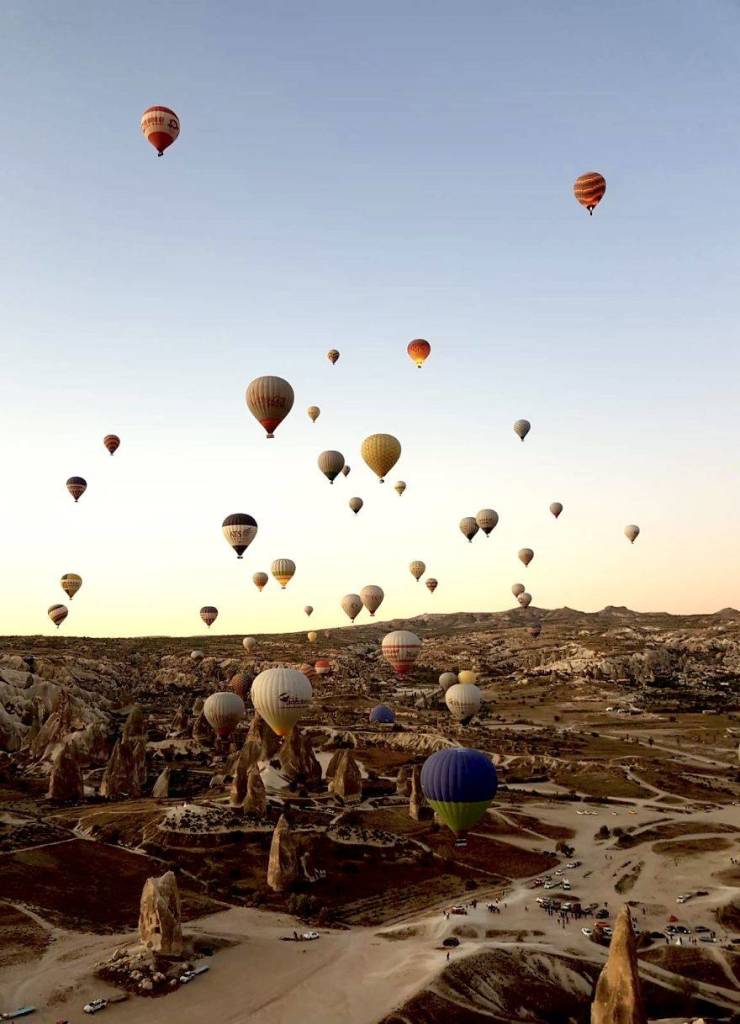 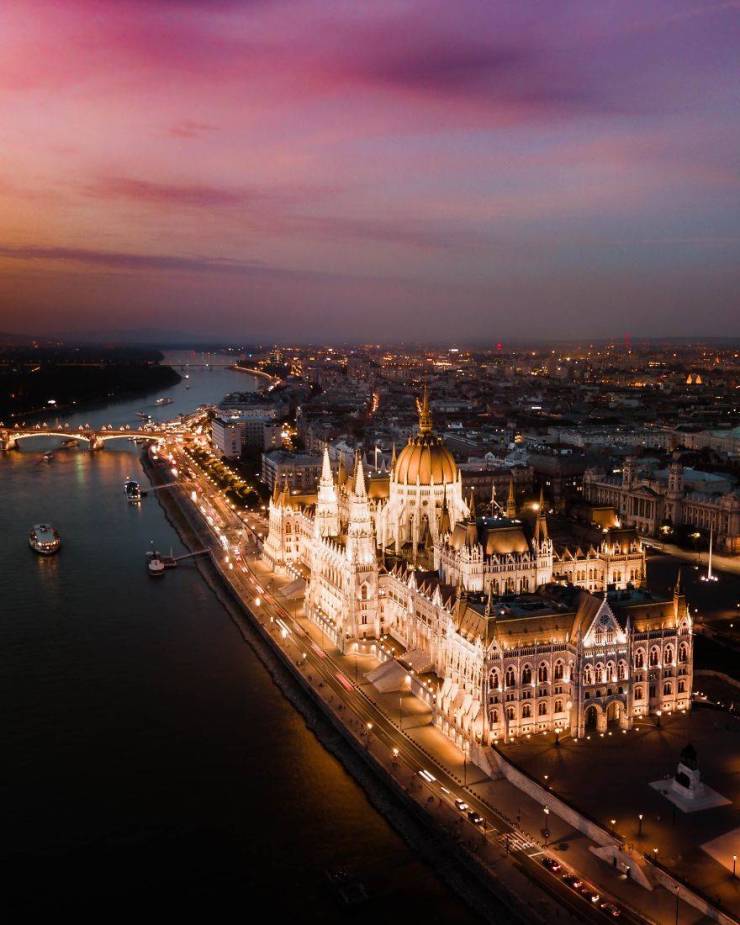 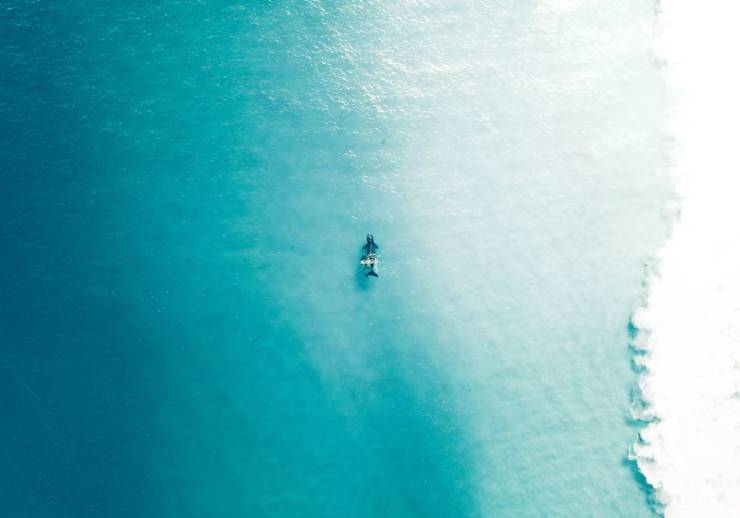 "The east coast of Australia offers excellent opportunities for whale watching. As I was flying my drone, I spotted this whale calf and mother surfacing." 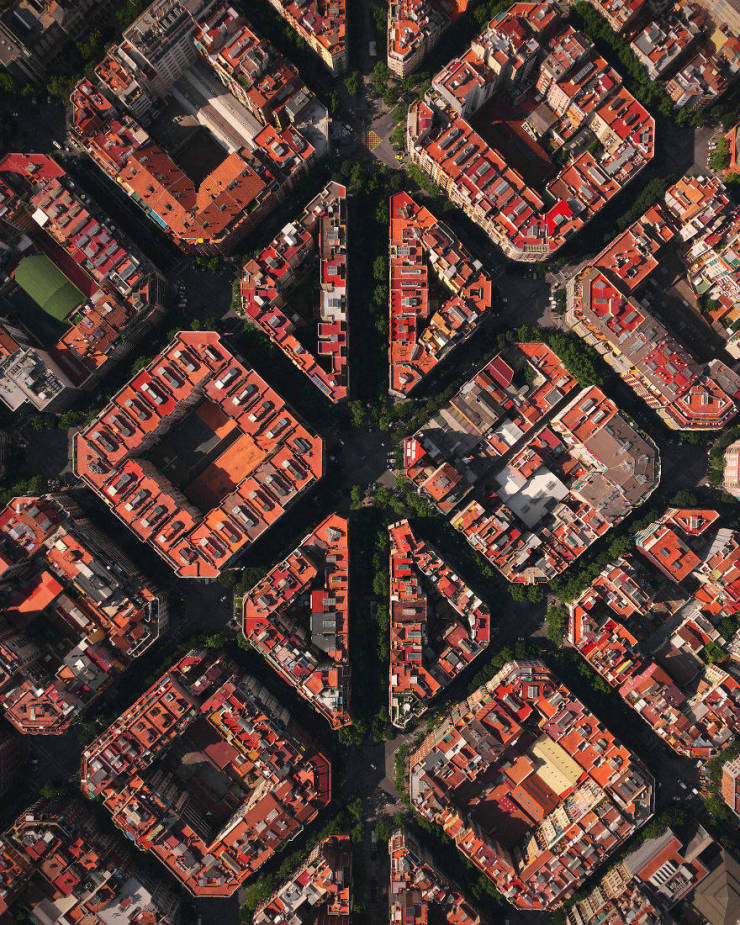 "As a photographer, I love shooting city landscapes. I have always dreamed about seeing the famous architecture of Barcelona and its symmetrical neighborhoods. Over the years I've seen a lot of aerial photos of the city, so I thought I had an idea of what was awaiting me, but when I flew my drone to see it for myself it just caught my breath. Barcelona is truly an amazing place that is unlike anywhere else." 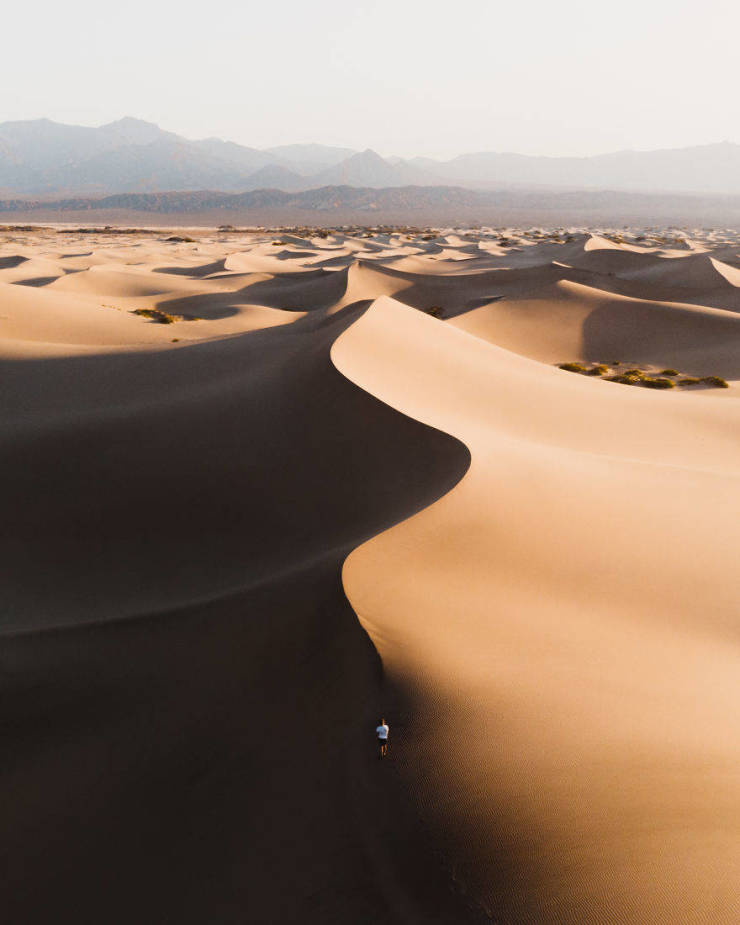 "I wanted to convey the beauty and scale of this unique location. It was important to photograph early as the temperatures here can reach to 134 °F (56.7 °C) during the day!"

One Of The Most Amazing Sunsets In Barcelona 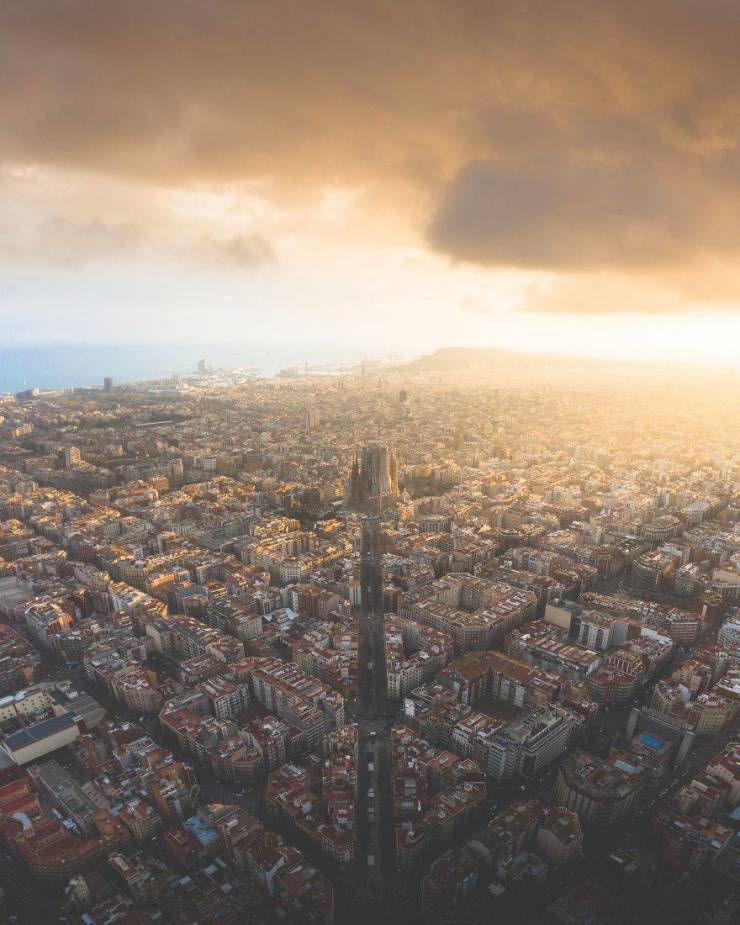 "It took me a whole year to get this shot right. I waited patiently for the sun to set in this exact position, so the lights create a path straight to the Sagrada Familia." 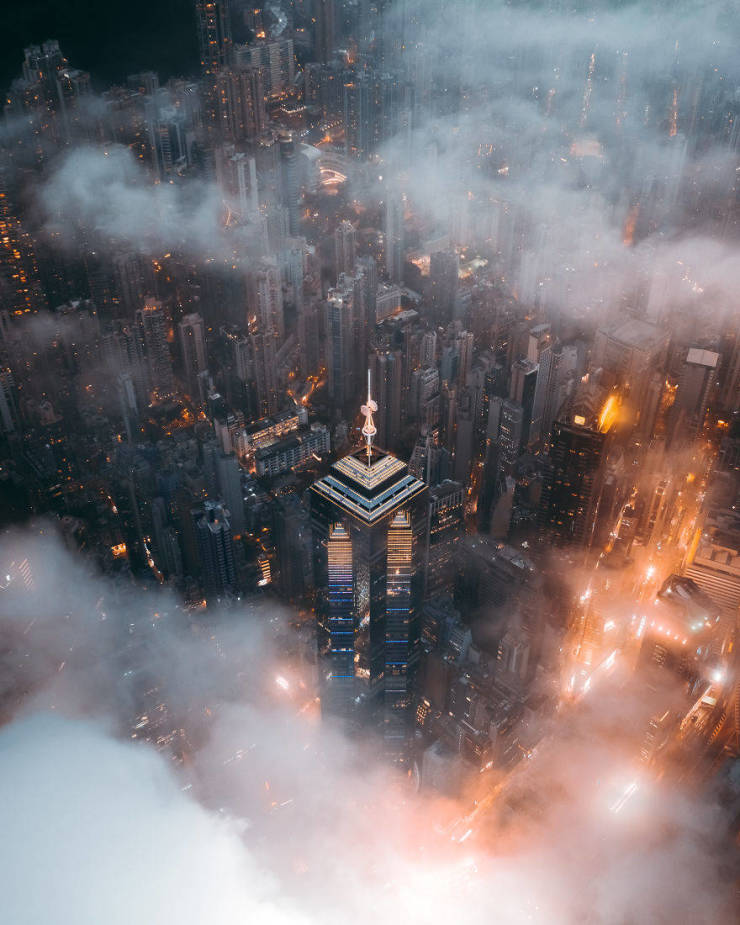 "A city without clouds is like a musical without music. I captured this shot during the sea of clouds season which only happens once a year. One has to wake up super early and keep monitoring the latest weather forecasts for a chance to capture such low clouds floating through the city. Hong Kong is like a magical dream: I want to show the world that this city is not just a cold concrete forest, but a city with a warm, beautiful soul." 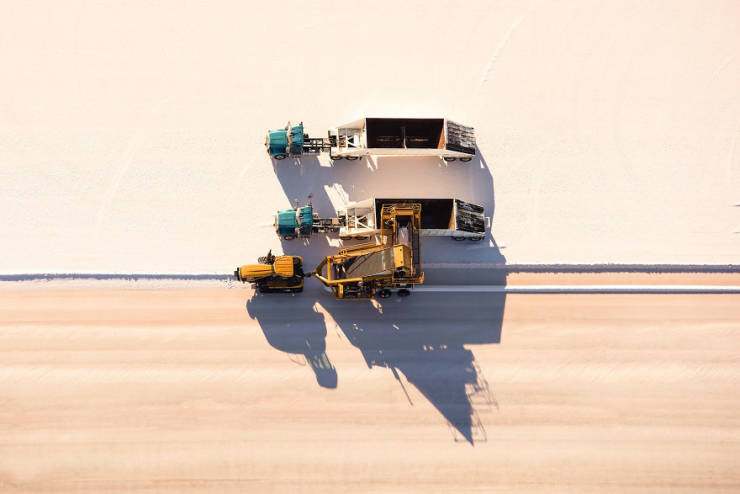 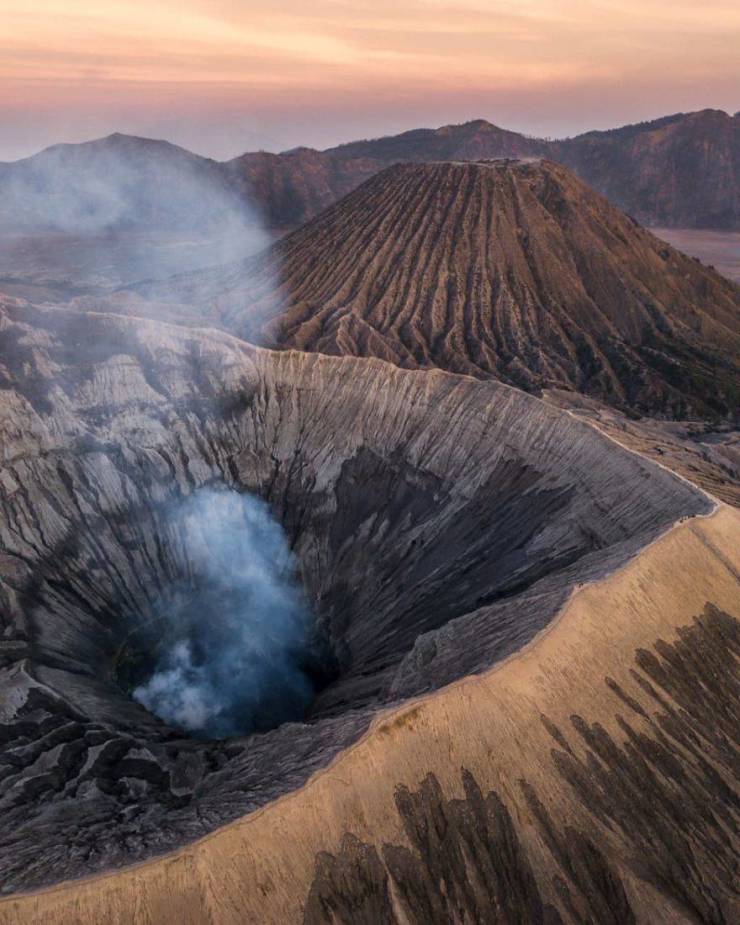 "We hiked on the rim of Java's Mount Bromo before sunrise, in almost pitch darkness, surrounded by rumbling sounds coming from the volcano. As the sun rose, we observed a cloud of smoke coming from a crater and felt suddenly so small in the front of nature. I did this hike with my 3-year-old daughter on my shoulders!"