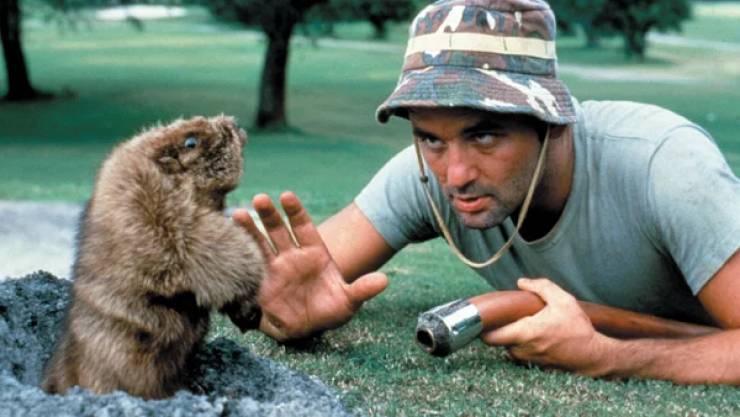 Carl Spackler was originally a silent character in the script, in the manner of Harpo Marx, but after Bill Murray was cast, Harold Ramis encouraged Murray to speak and improvise.

The role of Ty Webb was written with Chevy Chase in mind. 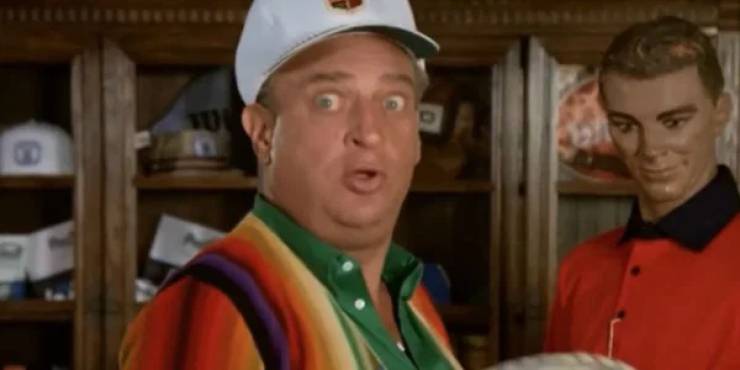 Rodney Dangerfield was so unaccustomed to making films he had to have some of the most basic aspects of production explained to them, and even then he didn’t get it sometimes.

When filming his first scene in the pro shop, Dangerfield didn’t understand that “action” meant to start the scene, and he did nothing. After calling for it several times, director Harold Ramis realized what was happening and explained what to do: “Rodney, when I call ‘action’, that’s your cue to come in and do the scene.” Dangerfield replied, “You mean do my bit?”, and Ramis confirmed. He called “action” for a third time and again, Dangerfield did nothing. Ramis finally said, “Ok Rodney, now do your bit,” and Dangerfield sprung to life and nailed his first take, even improvising the line about a free bowl of soup. From then on, Ramis never called “action” for a Dangerfield scene, he just said, “OK, Rodney, do your bit.” 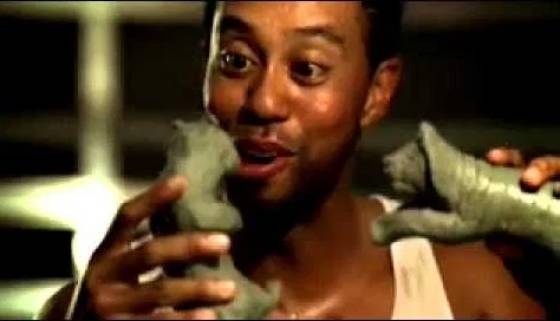 Unsurprisingly, the movie is a huge favorite among golfers and golf fans. Tiger Woods so adores the movie that he played Carl Spackler in an American Express commercial that included references to many of the movie’s most famous scenes. 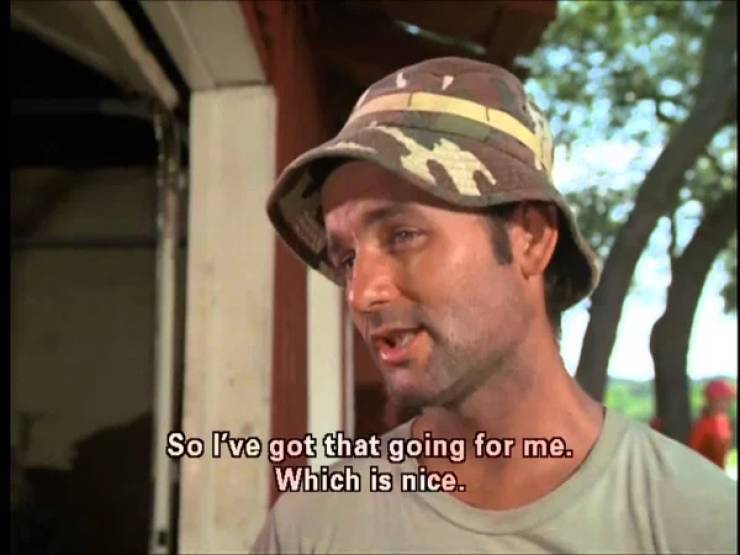 Bill Murray filmed all of his scenes, including the famous scene with Chevy Chase, in six days.

Bill Murray improvised the “Cinderella story” sequence from two lines of stage direction. Director Harold Ramis simply asked Murray to imagine himself announcing his own fantasy sports moment. Murray simply asked for four rows of ‘mums and did the scene. 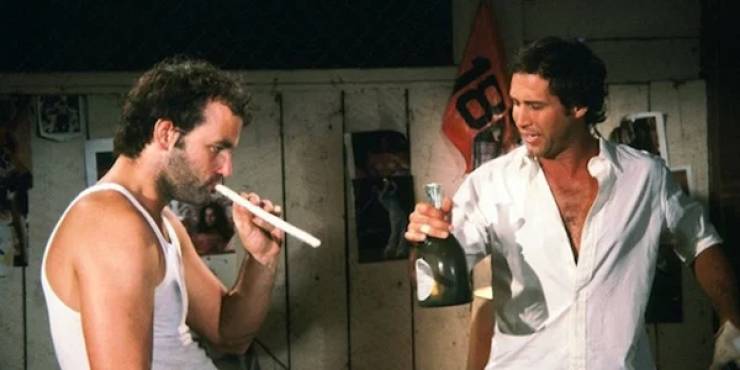 The famous scene that begins when Ty Webb’s golf ball crashes into Carl Spackler’s ramshackle house was not in the original script. It was added by director Harold Ramis after realizing that two of his biggest stars, Chevy Chase and Bill Murray (who did not get along due to a feud dating back to their days on Saturday Night Live (1975)), did not have a scene together. The three met for lunch and wrote the scene together. Although it has nothing to do with the plot, it is widely regarded as the funniest scene in the movie. This is the only time that Chase and Murray have appeared in the same scene together.

Harold Ramis wanted to use Pink Floyd to write music for the film, but couldn’t get them. After an audition, Kenny Loggins came up with the famous theme song for the film, “I’m All Right” and played it for the producers and got the job. 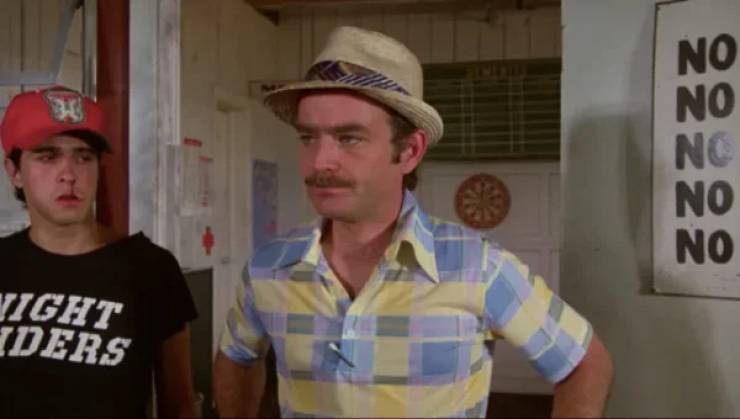 The movie was inspired by writer and co-star Brian Doyle-Murray’s memories working as a caddy at a golf club. His brother Bill Murray and Harold Ramis also worked as caddies when they were teenagers.

After filming wrapped each day, most of the cast and crew spent the nights partying, which eventually took its toll before the end of filming as cast and crew began to show up late for morning calls, holding up filming for several hours at a time. 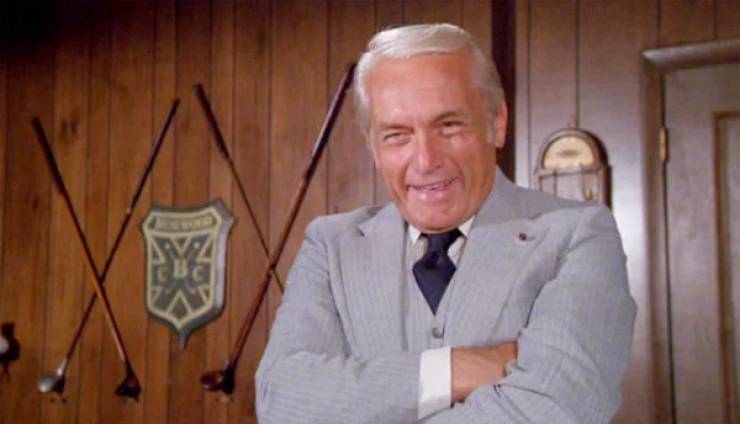 As it was his first directing job and he wanted to make sure the production was successful, Harold Ramis avoided attending the cast and crew’s late-night parties to focus on the next day’s shoot. However, when filming wrapped, Ramis went to the wrap party and partied so heavily and early into the party that he had to be carried back to his hotel room.

The gopher sequences were written and filmed after most of the movie was shot. Originally, Harold Ramis wanted to cast a live animal to play the gopher. When that did not work out, the animatronic gopher and its tunnels were built by John Dykstra. 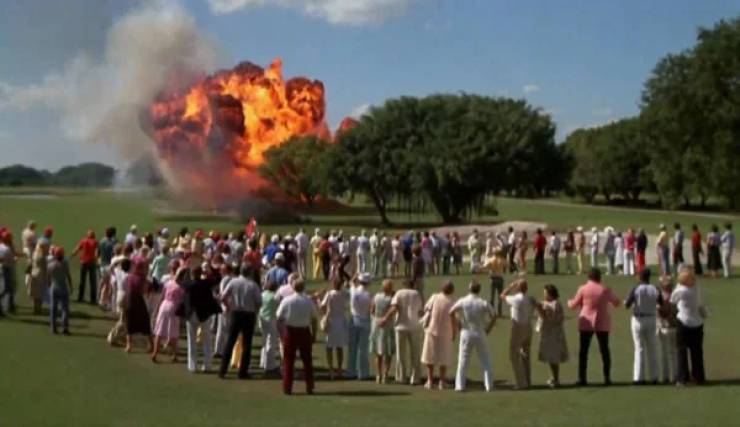 A big hill was built from scratch for the climactic 18th-hole scene, because the country club did not want its course blown up. The pyrotechnic people used too many explosives, which completely destroyed the hill and caused planes flying by to report the explosion, as if a plane had crashed there.

The sound that Chevy Chase makes when sinking putt after putt was a gag based on the sound effect used in The Six Million Dollar Man (1974) whenever Steve Austin performs some astounding feat.

The reason the scenes of Mr. Gopher’s underground world look better than the rest of the film is because they were filmed on a sound-stage with better quality film stock and cameras rather than on-location, like the majority of the film.

The scene involving a Baby Ruth candy bar being thrown into the swimming pool was based on a real-life incident at Brian Doyle-Murray’s high school. 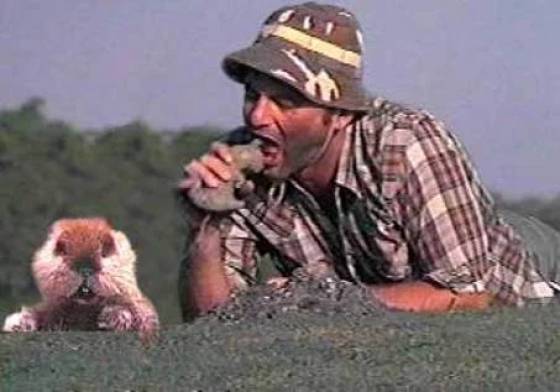 The noises that the Gopher makes are actually vocalized by a dolphin, and the dolphin sound effects used are the same ones that were used for Flipper (1964).

Cindy Morgan (Lacy Underall) has said that the oil massage scene with Chevy Chase was also completely improvised. When Lacy exclaims “You’re crazy!” that was Morgan’s genuine reaction to Chase dousing her with oil. 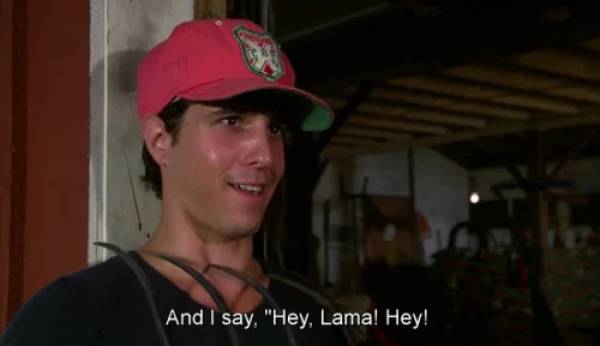 Years later Harold Ramis had the opportunity to spend time with The Dalai Lama. He recalled that the monks were confused about this speech because the “Dalai Lama doesn’t play golf.”

To the end of his life, even though the film became better appreciated over time, Harold Ramis was dissatisfied with his directorial debut. His greatest complaint was that no one in the film, other than Michael O’Keefe, was able to swing his or her golf clubs properly.