"What is this thing? Has a wooden handle, leather strap, the bottom is possibly some kind of antler and is quite heavy. Seems like a walking stick but is only 22cm long. Found in the UK." 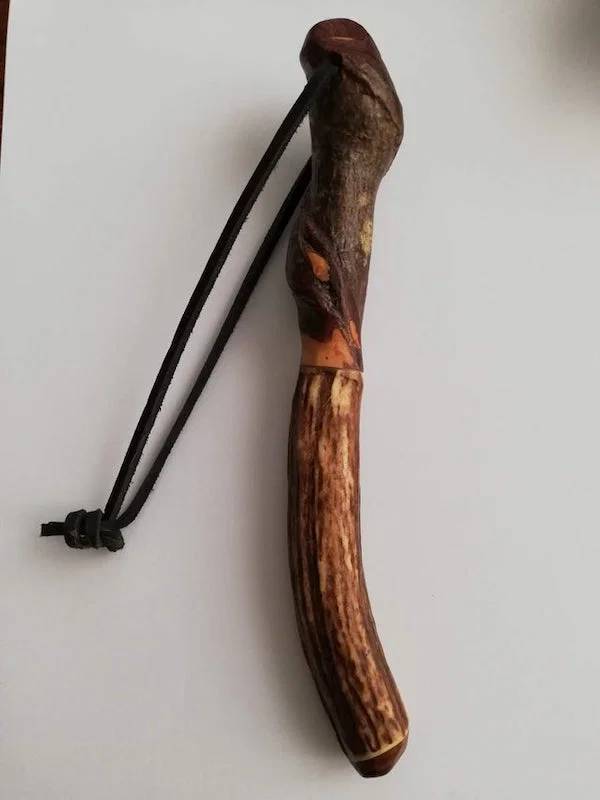 A: "It looks like a priest for killing fish, by hitting them on the head with it." 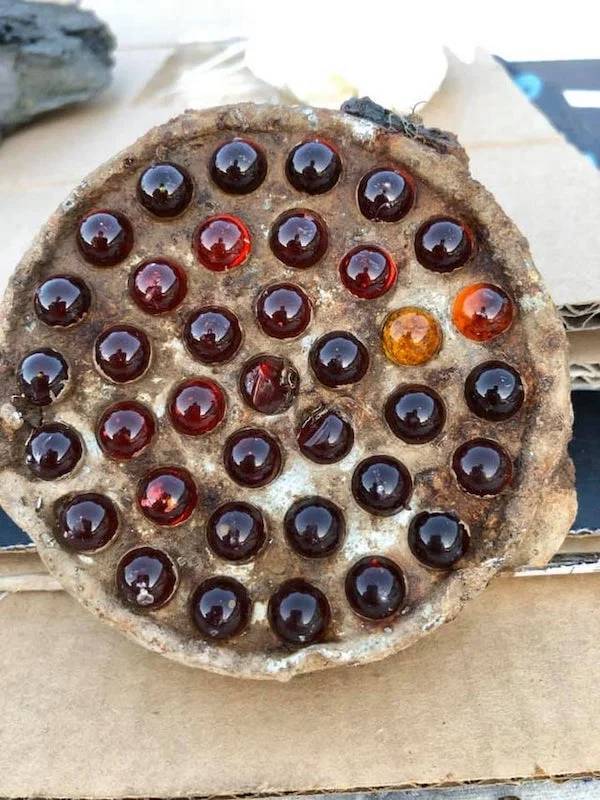 A: "These were how old reflectors were made, like for railroads."

"WHAT is this? It’s heavy metal (brass?) and the dial on it slides." 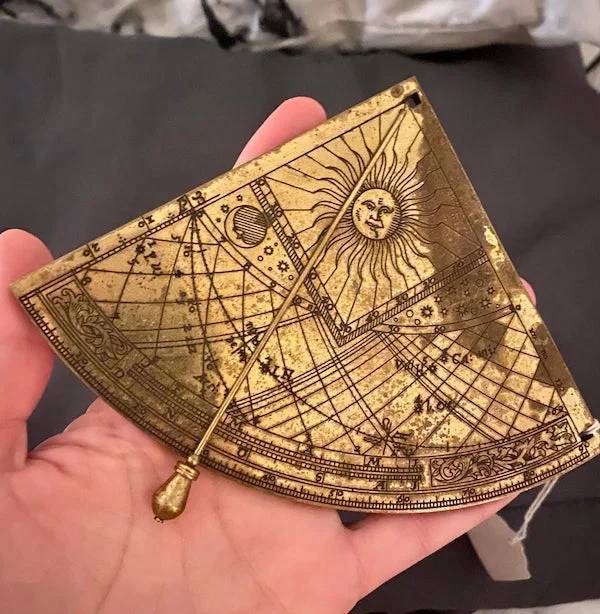 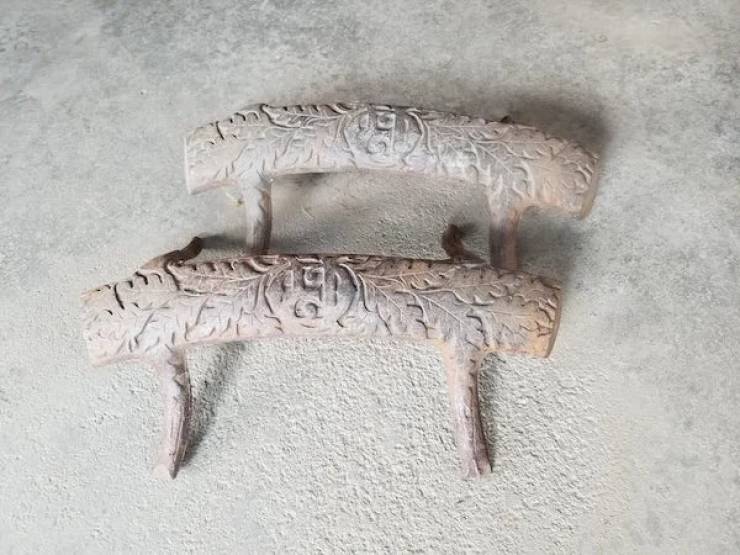 A: "What you have are decorative parts to a Round Oak stove. They are cast iron, missing their nickel-plating."

"Spikes on the the roof of a hospital, what do they do and why are they sharp and pointy?" 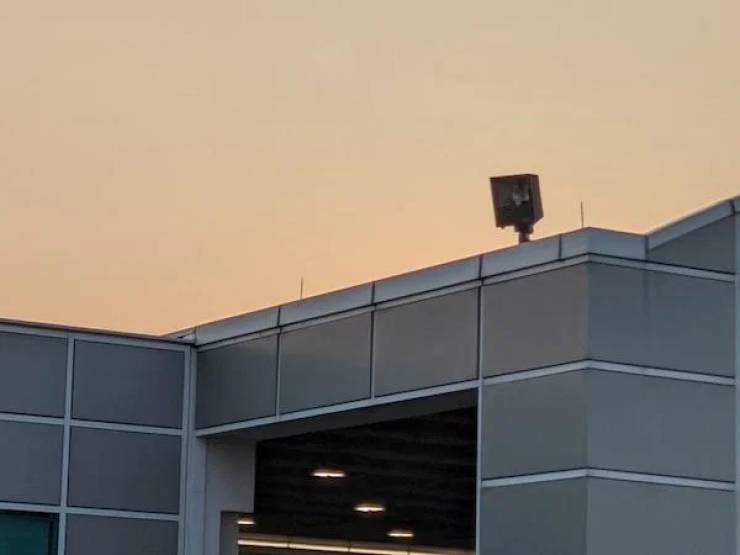 A: "Lightning rods. I have seen these on several buildings which are heavy in electronic equipment, a Hospital full of equipment could take a multi-millions loss if a lightning strike were to hit wrong place."

"WITT and what is it meant to (de)magnetise?" 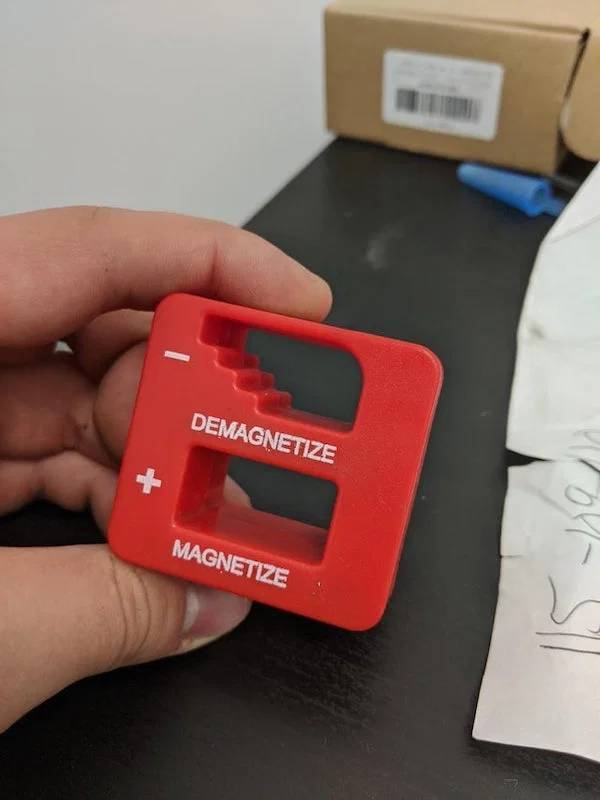 A: "Mainly screwdrivers. But can do any ferrous metal that you’ll like to be magnetised/demagnetised."

"Found in Grandfather’s backyard, what model is this???" 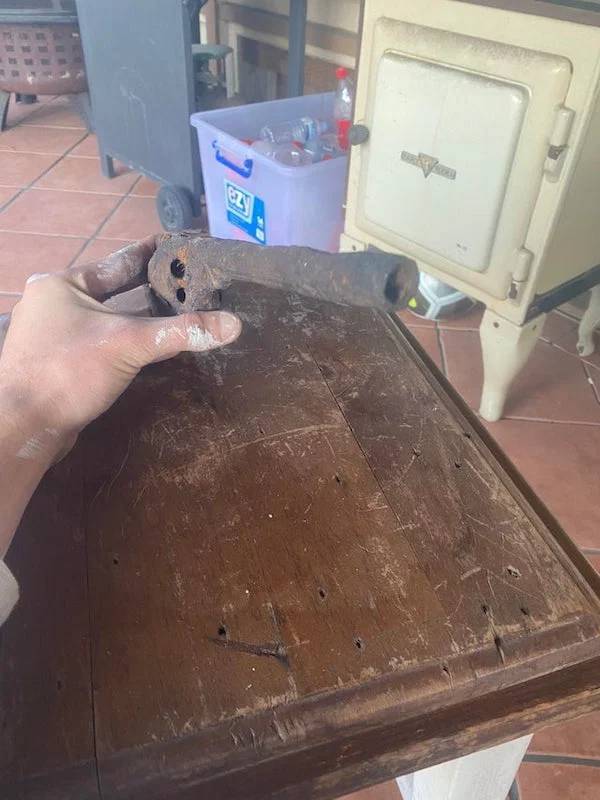 "Tiny dial on top of range hood, easily comes out and rotates" 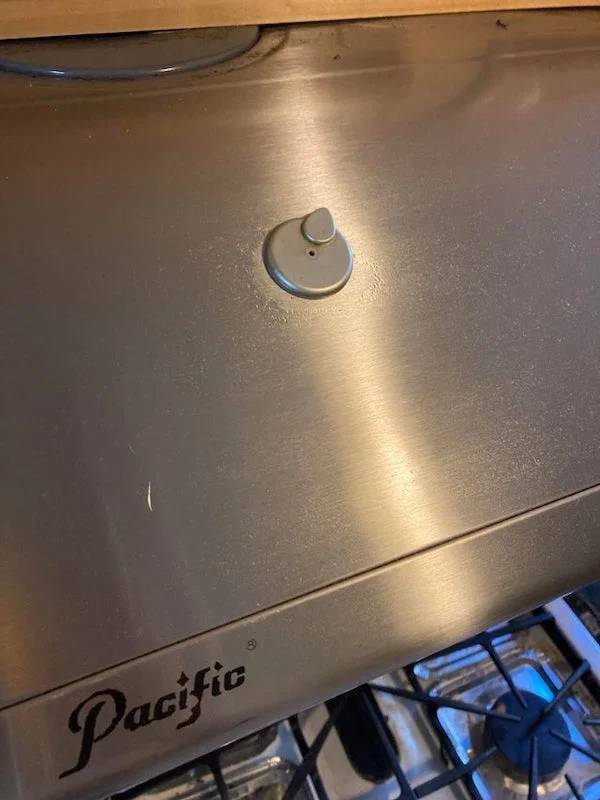 A: "It’s the reservoir for cleaning solution."

"What are these white markers in this field?" 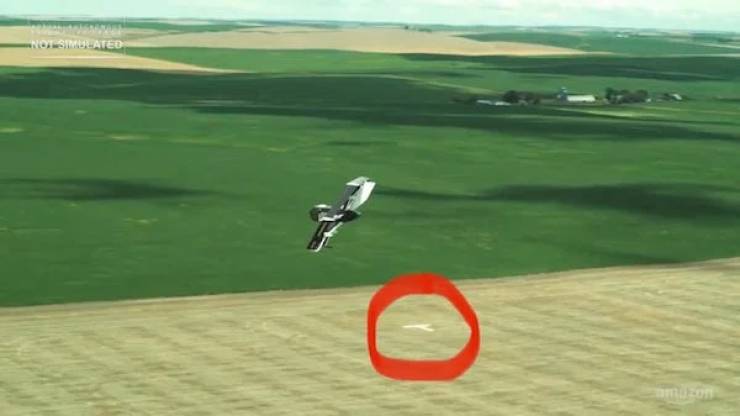 A: "Looks like airfield markings denoting what direction to takeoff in"

"What is this thing we found while renovating? we havent touched it since my dad thinks its an explosive from ww2. about 10″ long." 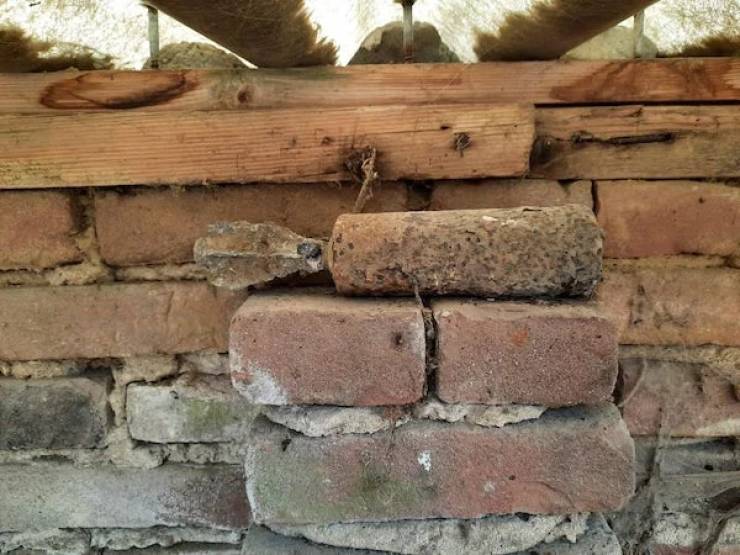 A: "Looks like a WWII British 2″ mortar round. They did not use chemical weapons in WWII so the filler is likely high explosive but could be WP or Illum."

"Thought these were ice tongs but the prongs are bent outward to about a 90 degree angle." 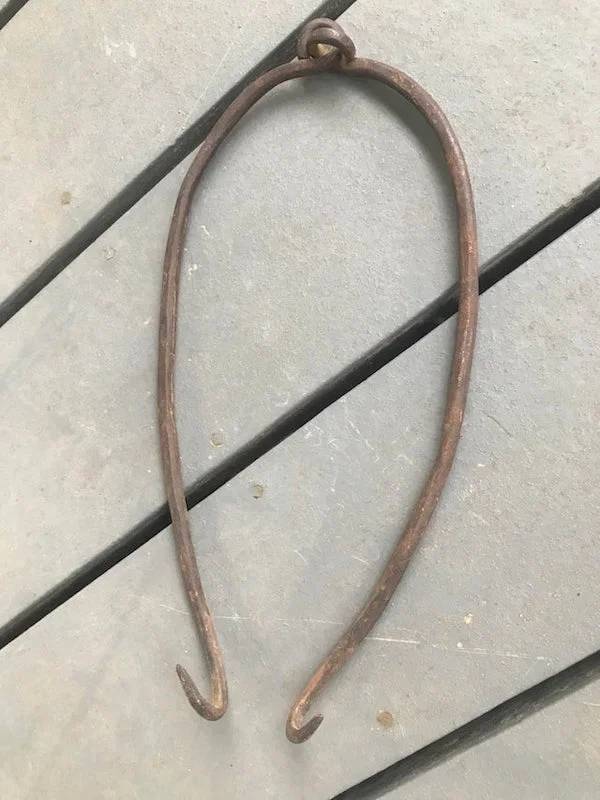 "A friend of mine found this in an old barn, in Connecticut. Beer for scale. Thanks!" 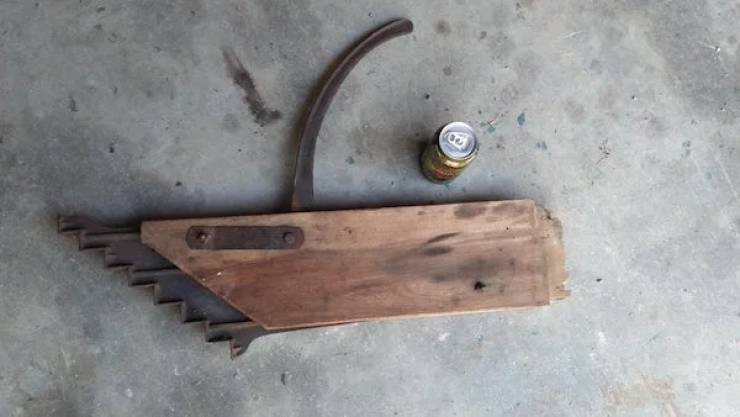 A: "Its an old wagon/buggy jack. Its missing the flat base, you can see where it broke off"

"Found outside on my door in Florida. Any ideas?" 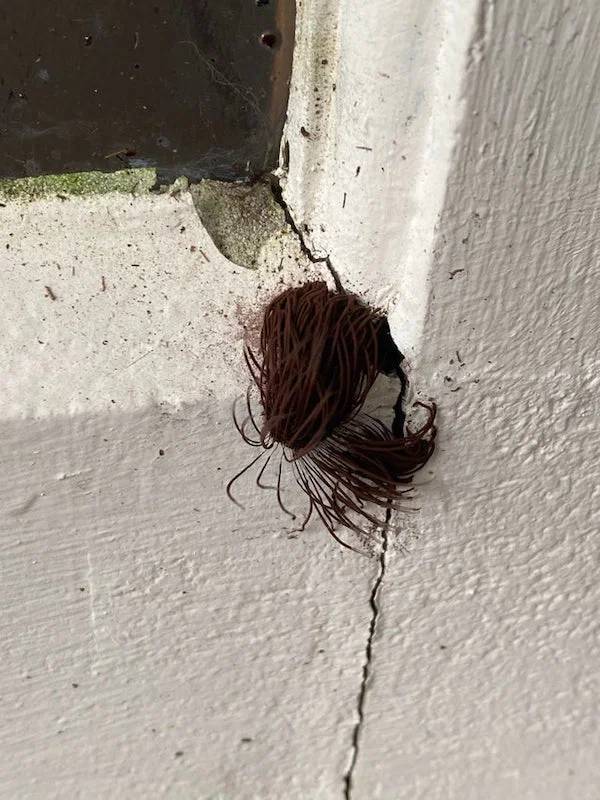 A: "Its called Tree Hair – Stemonitis splendens. It’s a fungus that grows on rotting wood"

"Found in a parking lot. The component attached to the screw moves around easily. About an inch in diameter." 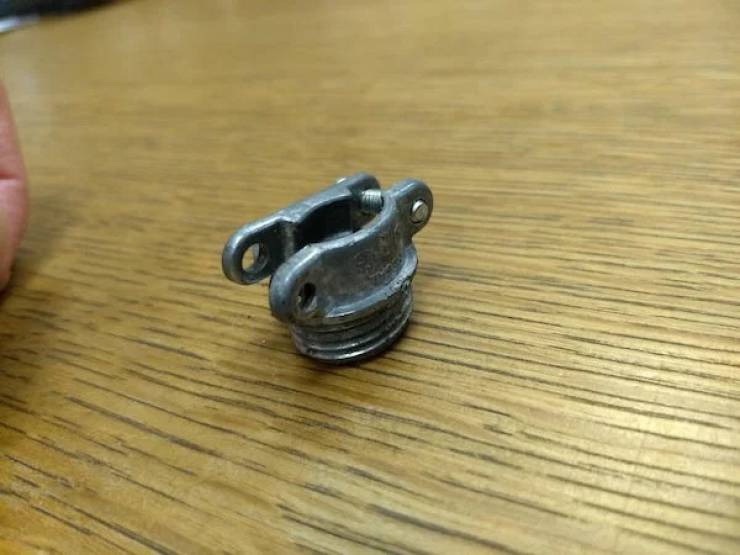 "An etching found on the wall of an old missionary in Southern California. There was a bricked over doorway next to it. What is this thing?" 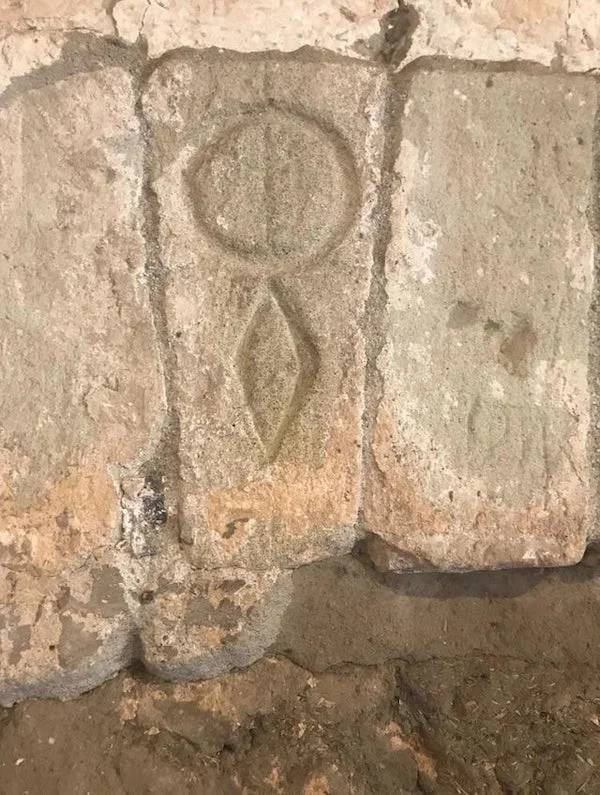 A: "I did a little digging on the rhombus symbology. I believe it’s also called a lozenge. “A lozenge shaped escutcheon is used to depict heraldry for a female (in continental Europe especially an unmarried woman), but is also sometimes used as a shape for mural monuments in churches which commemorate females”" 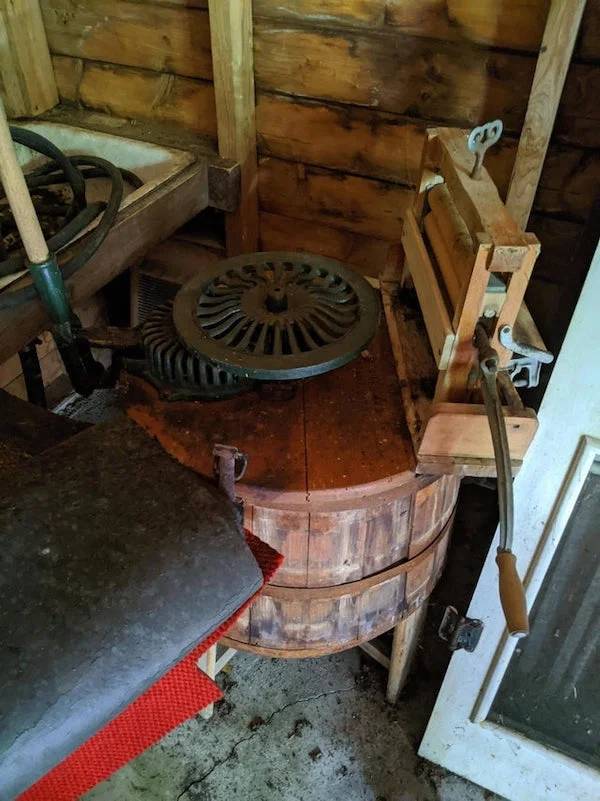 A: "Old manually operated washing machine complete with mangle for squeezing the excess water from the clothes before hanging to dry."

"At an old cabin vacationing and I found this old General Electric AM radio. It’s pretty large like Atleast 3ft tall. I was wondering if anyone knew the model type? I couldn’t find any info online." 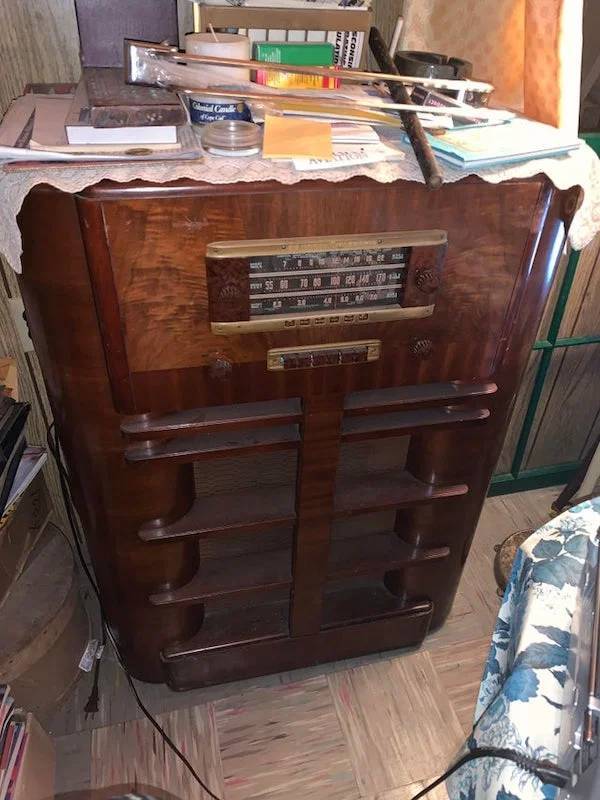 A: "Looks like a General Electronic Tube Console model J-805." 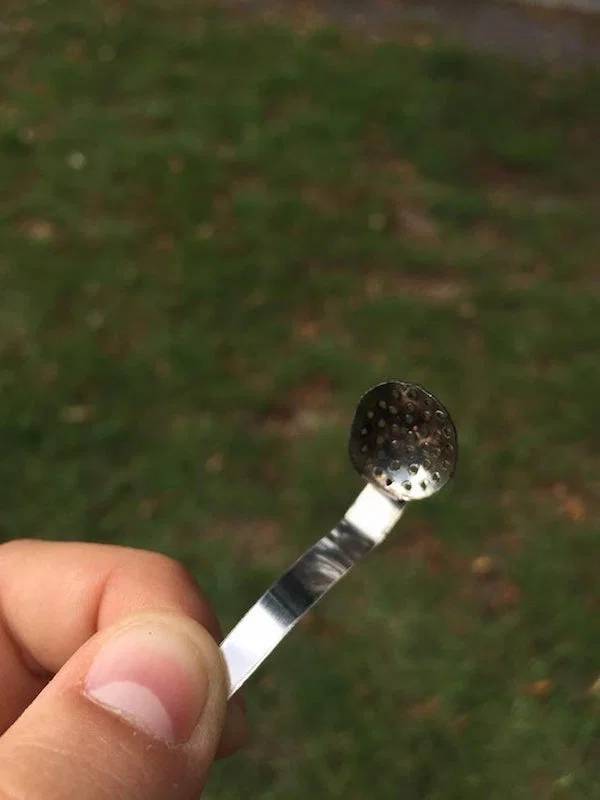 "Found this when going through my parents attic what helmet is this?" 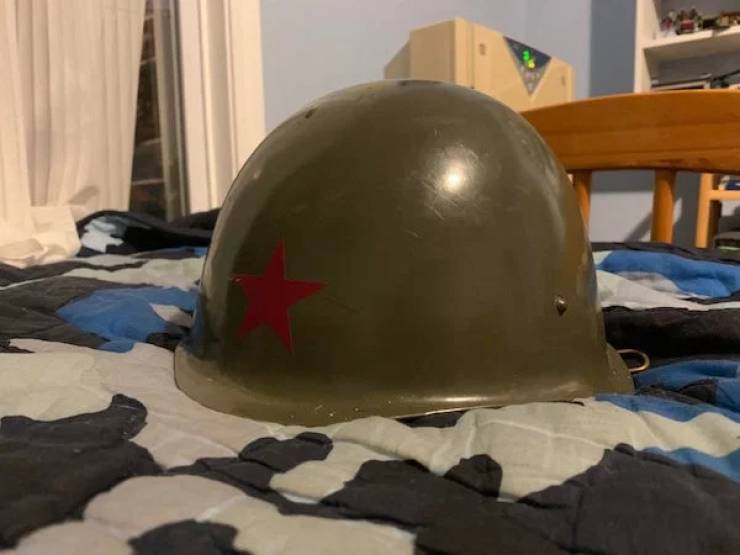 "Anyone know what this could be? My sister got this in an unmarked package forwarded to her address, no instructions or labeling included" 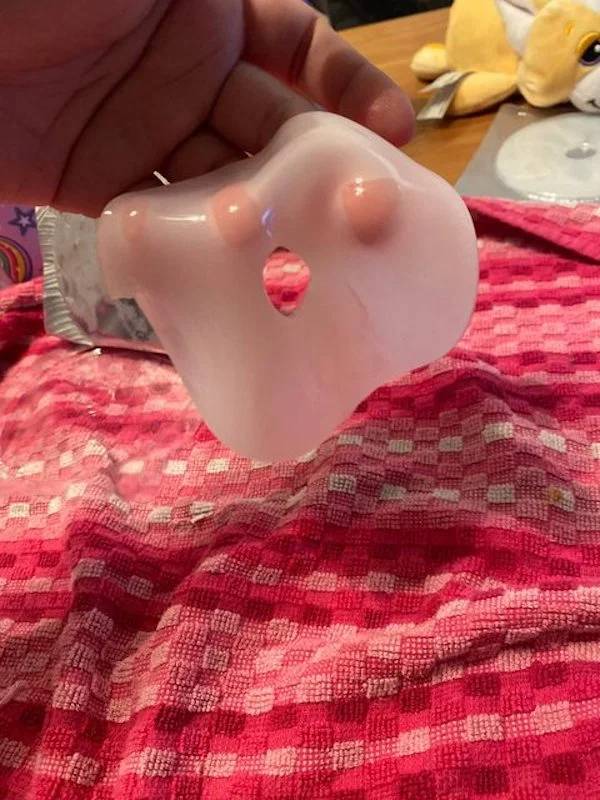