Andrew Garfield as Peter Parker in The Amazing Spider-Man 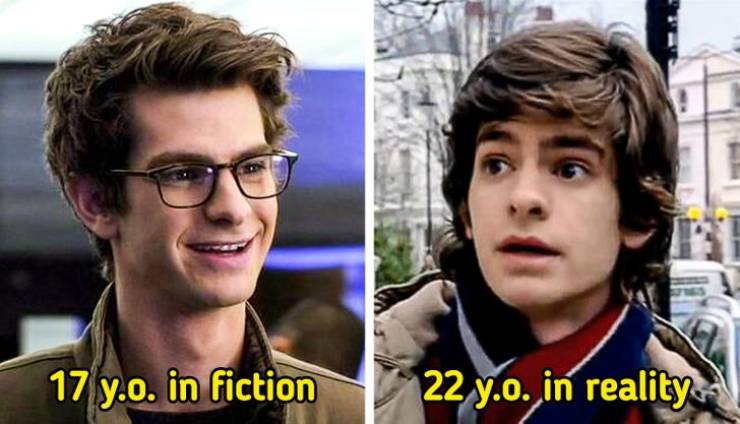 Andrew Garfield played Peter Parker (a 17-year-old) twice. However, in the first film that was shot in 2010, Andrew was 27 years old and had to put himself in the shoes of a young Spider-Man who was 10 years younger than him. In the second image, we can see how the actor looked in his first appearance in the 2005 series Sugar Rush, with a more youthful appearance at 22. 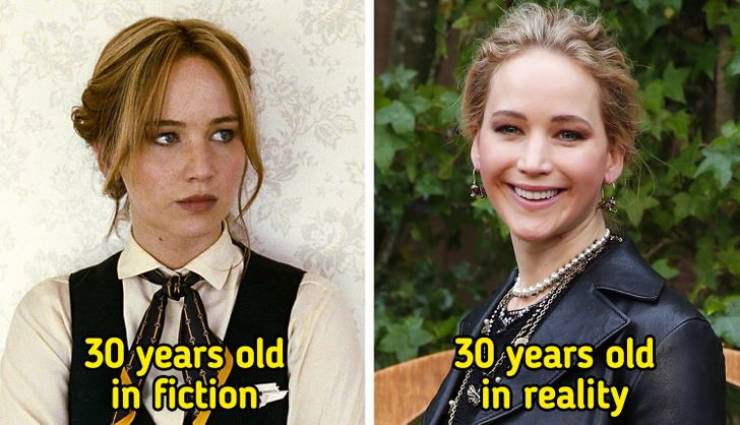 Jennifer, besides being a great actress, can play all kinds of roles, as she demonstrated in the movie Joy, by bringing Joy Mangano to life. At the time of the film, she was 25 years old and put herself in the shoes of a 30-year-old single mother with 2 children in her care, who decided to create an invention to become a millionaire. And Jennifer remains radiant at 30, as we can see in the second image.

Audrey Hepburn as Holly Golightly in Breakfast at Tiffany’s 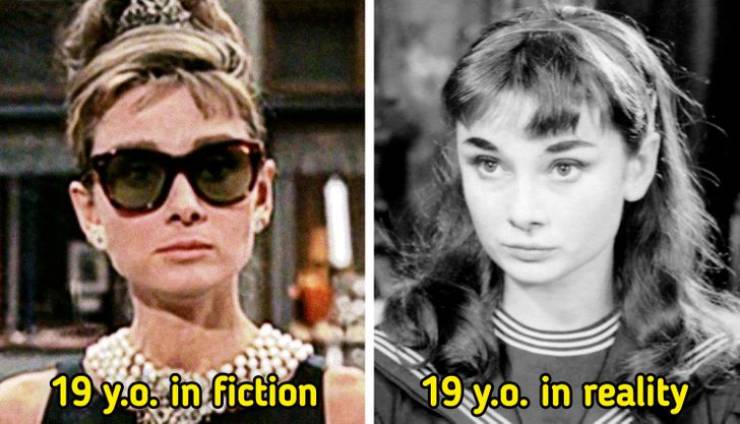 One of the most remembered roles in Audrey’s career was that of young Holly Golightly in Breakfast at Tiffany’s. The novel on which this film is based tells us about the experiences of an intelligent 19-year-old girl. However, in 1960, when the shooting of the film began, Audrey was 31 years old. In the second picture, we can see her looking younger when she was actually 19 years old.

One of the most feared and remembered characters from the magical Harry Potter saga is Professor Snape. In the film Harry Potter and the Chamber of Secrets, the plot takes place in the ’90s, when Severus was teaching at the age of 32. However, Alan Rickman managed to bring this character to life at the age of 55. In the second image, which belongs to the television series Romeo & Juliet, we can see Alan at 32 years old.

Ian Somerhalder as Damon Salvatore in The Vampire Diaries

In this series for teenagers that is full of paranormal events and with a dark atmosphere, we put ourselves in the situation of the young protagonist (who falls in love with 2 vampire brothers). The one with the worst intentions was played by actor Ian Somerhalder, who was 30 years old at the time of the shooting. However, Damon’s character was supposed to be seen as a young man between the ages of 20 and 21. In the second picture we can see how the actor actually looked at 21 in the series Young Americans. 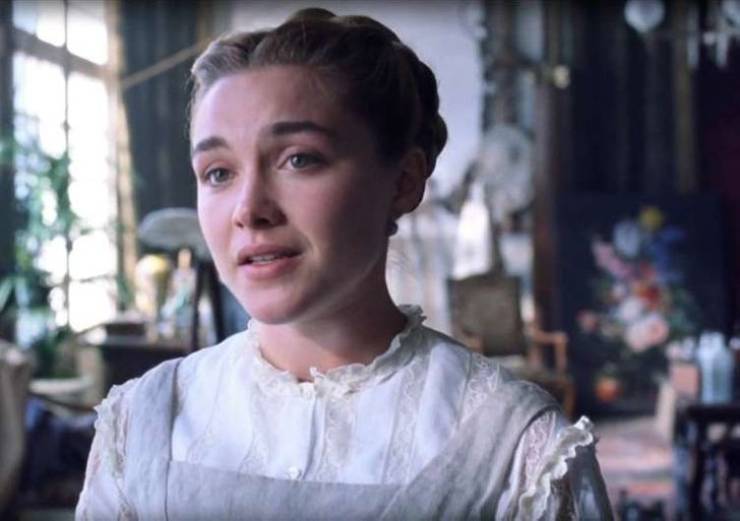 In the film Little Women, actress Florence Pugh brought Amy March, the 12-year-old younger sister with a talent for painting, to life. However, she was 23 years old when the film was shot, and she had to play a character 11 years younger.

Leonardo DiCaprio as Frank Abagnale Jr. in Catch Me If You Can 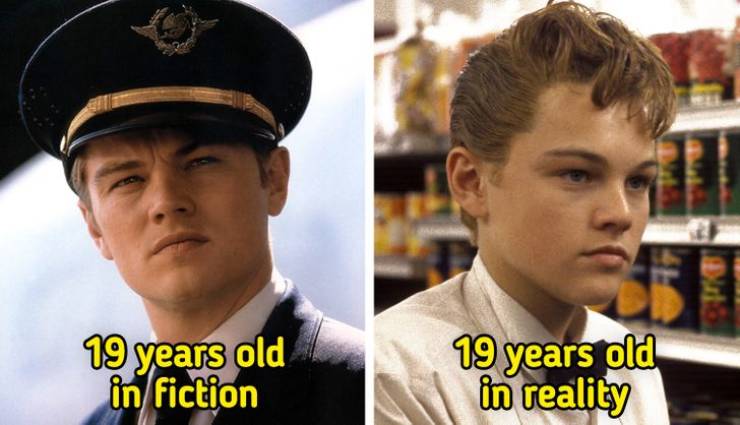 In this popular film, we are shown the ingenuity and cunning of a young man who has just turned 19 and who, after pretending to be a pilot, a doctor, and a lawyer, makes an immense fortune. Leonardo was chosen to give life to this iconic and charismatic personality in 2002 when he was 28 years old. With a physique more typical of a teenager, in the second image, we can see how Leo looked at age 19 when he played Tobias Wolff in This Boy’s Life.

Emilia Clarke as Daenerys Targaryen in Game of Thrones 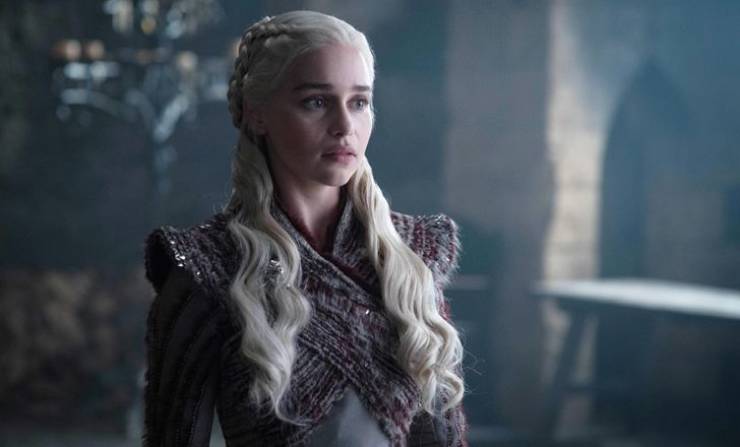 Game of Thrones, the world-renowned series, showed us a whole variety of characters that were hard to forget. Daenerys, besides being the main character, was one of those that evolved the most throughout the production. The actress who gave life to this character was Emilia Clarke, who at the age of 24 played 17-year-old Daenerys. 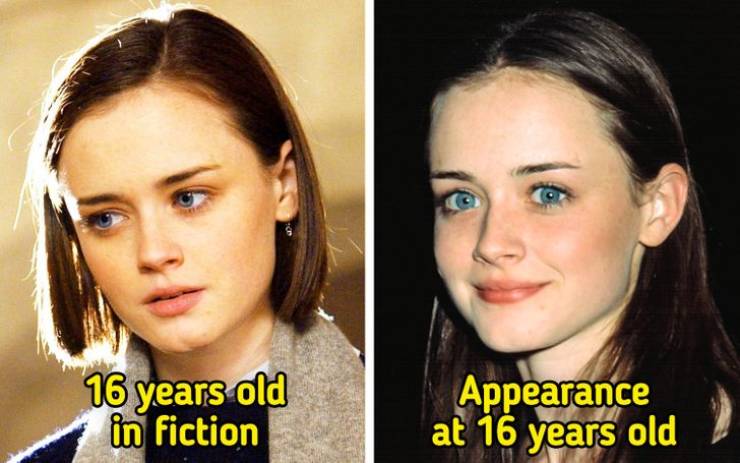 In this TV series, we learned about the busy and intense experiences of a single mother who had her daughter, Rory, as a teenager. The role of the almost 16-year-old intellectual girl was played by Alexis in 2000, when she was 19 years old. In the second image, we can see what Alexis looked like at 16. 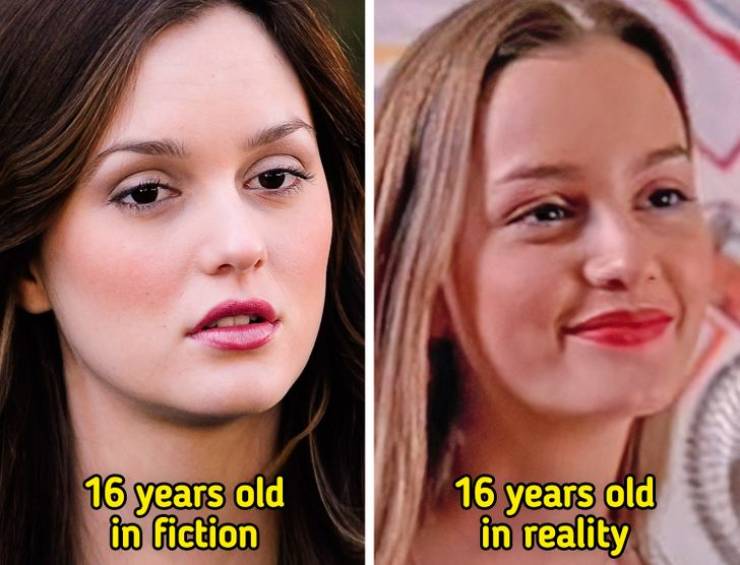 One of the most remembered characters in a TV series was the beautiful and popular Blair Waldorf, who was in high school at age 16. Leighton brought this girl to life when she was 21 years old in 2007. In the second image, from the film Hangman’s Curse, we can see what Meester looked like at age 16.

Jennifer Lawrence as Katniss Everdeen in The Hunger Games 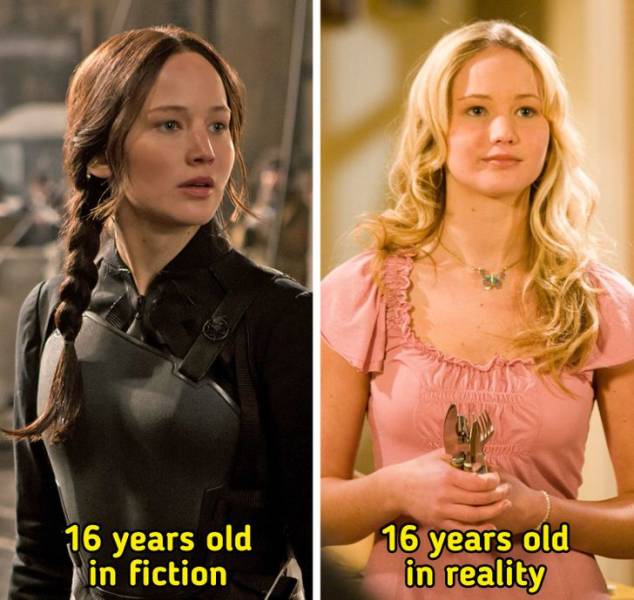 In 2011, it was announced that the main character of the film The Hunger Games would be played by Jennifer. The novel’s author commented that she was the ideal one to transmit the maturity and strength that the character required. Katniss began her adventure at age 16, and at the time of the shooting, Jennifer was 20. However, in the second picture, we can see how she really looked at age 16, when she took part in the series The Bill Engvall Show.