"Friend of ours found two bullet resistant vests with paramedic written across them, being thrown out behind a fire station. I guess the expire or something."

"In the eighties I picked up a number of Philips colour tvs. I had a few, so fixing them was just a question of swapping parts. I then sold them cheaply or gave them away to fellow students."

Franco was getting his MFA at my school, where I did work-study on the garbage/recycling crew. Lots of great and hilarious finds, but that’s the most memorable."

"I’m not a garbage man, but I once scored a whole custom built staircase from a dumpster. It was in perfect condition but apparently built to the wrong spec. It worked great for my barn"

"Not me but my brother. Someone apparently threw out grandpas stuff from the attic after he passed away. This was the last scheduled pickup at the house and everything was already moved out, nobody living there.

Driving an automated (claw to grab and dump) truck, my brother was irritated there were these 2 bowling bags he had to get out to throw in the truck. He realized they seemed a bit heavy, so he opened them to see why. Inside there was real silver silverware/flatware. He ended up selling it for scrap prices to a jeweler and got $3000."

"My father was a garbage man who also did clean-outs for homes and businesses, where they’d rip apart the entire building and throw everything out in their dumpsters. He worked on a ton of really massive houses, some worth 10s of millions of dollars, one was worth 40 million and wasn’t even the permanent residence.

Best things I got as a kid: A pretty much unused trampoline with a net and everything.

A go-kart that my dads friend was able to fix up and we used all the time (I live on a dead end).

And once he cleaned out a deli that was closing down, and we no joke had unlimited Snapples and Sodas of every flavor for almost a year. I’d drink the Snapples while out on the trampoline. I used the hell out of all 3 of those things in my childhood"

"My father was a garbage man when I was born. I don’t remember because I was like 3 months old. But my first dog was in the trash.

My dad stopped. Picked up a box and heard some shuffling on the inside and there were two puppies. My dad kept one and the driver kept the other. They were brother and sister (my dad assumed). He kept the male and named him Jasper. He was literally my best friend growing up.

I had him for 13 years and my dad tells me the job was worth it just for that dog. He called the police and animal control on the residence but doesn’t know what happened after that. All I know is I’m 37 and still love that dog so much. I’m so thankful my dad saved him and his sister."

"I found my wife in a pile of garbage while working on a garbage truck.

I was working being trained as a garbage man and one day a women was throwing out way to much good stuff, boxes of books and I could see she was trying to fill a car and mini van, so I figured she was moving and having to sacrifice good stuff.

I talked to her and offered to come back later and help her move so she didn’t have to throw away so much stuff, and it ended up being a story that her husband left her for her best friend, and they moved in together, and she couldn’t afford the townhouse anymore as she was undergoing cancer treatment.

We got married one year later. I like to say I found her in the trash and fixed her up, but the truth is it is opposite. I was the trash she fixed up" 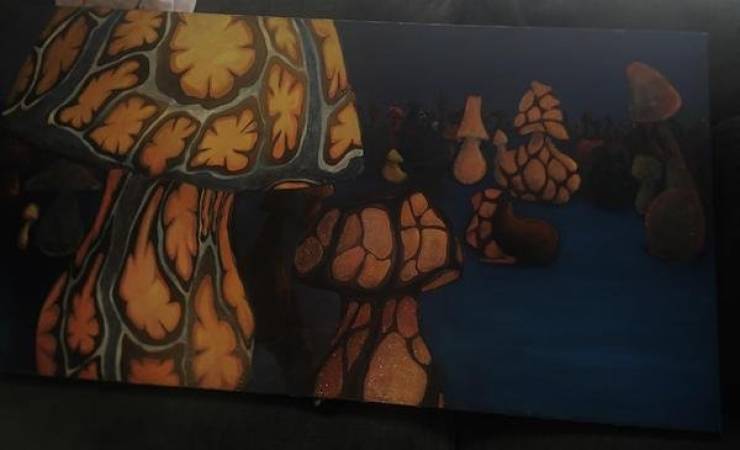 "Before I was born my mother found a huge painting of mushrooms. it’s blue and yellow and certain parts of it glow in the dark, it’s one of the few things I have of her and it’s the most beautiful thing I’ve ever seen and my description gives it no justice :)"

"I worked at a garbage plant building new trash silos and all I got was Weils Diease (Leptospirosis) from the rat piss on the garbage. I was ill for weeks."

"I found a cardboard cutout from the Mr and Mrs Smith movie release when it was in theaters. I put Mr Smith on one side of the truck and Mrs Smith on the other side. Got a few fun honks going down the road with a gorgeous Angelina Jolie on the back of a trash truck"

"I used to collect the recycling rather than the trash and back then we had to sort it at the truck if the person hadn’t separated. One house repeatedly put used condoms in with the plastics. In the end my crew mate knocked and informed the 80 something year old man that they weren’t recyclable."

"I got a 1944 Mills hand grenade that someone had thrown out."

"Living near an $$$ college you wouldnt believe the [email protected]#t kids chuck when they are inna hurry to move out. A few springs ago I found a very nice Banana Republic brown leather bomber jacket with puke or soup on the sleeve. I wiped it down with armor all, vacuumed the crumbs from the pockets and sold it for $125 that night.

My best haul was a nightclub that had a minor fire on their outdoor deck and they decided to gut and remodel the whole place. I pulled from the dumpster 3 preamps, 2 300w stage speakers and a guitar amp. Sold all for > $500 the next weekend."

"Oh man, my time to shine! I’ve been working at a waste transfer station (“garbage dump”) for many years.

-a freezer stuffed with a skinned, rotting, headless deer carcass. We nearly called the cops before we realized it wasn’t human.

-Used needles. The worst being a tie between “porcupine couch” and the lady who literally handed me a paper bag full of syringes she found during a park cleanup.

-large container of old crystallized picric acid. Bomb squad had to deal with that one.

-a high end laptop in perfect condition except for a tiny crack on the lcd panel. Easy DIY repair that took $40 and 5 minutes, thing would’ve cost $1.5K new

-a 1st gen platelet counting machine, complete with weird tubes of bright green liquid and mercury. When I was prepping it for hazmat disposal I had to call the company that bought the company that made it for some info… they never digitized the records but the oldest repair tech still working was super excited because he remembered servicing them 50 years ago.

-coffin. No body, just the coffin. Couldn’t see anything wrong with it either.

-buckets of testicles (from a ranch) that had been sitting out in the summer heat for a week. Smelled so bad my coworker hurled. That’s not the weird part… the weird part is the guys wanted their buckets back. Do you know how bad it has to smell to make a garbage collector puke? And they wanted them back?!

-the $10k duffel bag. Lady came in super upset because earlier she threw out a duffel bag that she didn’t know her boyfriend kept cash in. Over $10,000 in cash. We never found the bag.

-16 full size barrels of old vegetable grease some guy had saved up in his garage. He was planning to make a biodiesel car or something."