Jackie Chan in Enter the Dragon
1

In the Fist Of Fury (1972), Jackie Chan was one of many extras who played Bruce Lee’s enemies. While filming one of the fight scenes, Bruce accidentally hit Chan’s head with a stick. After finishing the episode, he came up to Jackie to apologize. Chan in his turn actually pretended that his head hurt much more than it really did. The thing is Bruce Lee was his idol and Chan liked the attention. Afterward, Bruce started to pick him out of many other actors and even invited him to be a stunt double in Enter the Dragon.

One of the actress’s little-known works was her role as the belly dancer, Maya, in The Young Indiana Jones Chronicles series. This and many other similar roles created the image of a beautiful girl for Catherine in the UK and that’s why she couldn’t attain success. Luckily, Zeta-Jones didn’t get scared of starting all over again in Hollywood. That’s where she was noticed by Steven Spielberg who recommended her for the main female role in Martin Campbell’s movie The Mask of Zorro, which turned out to be a breakthrough in her career. 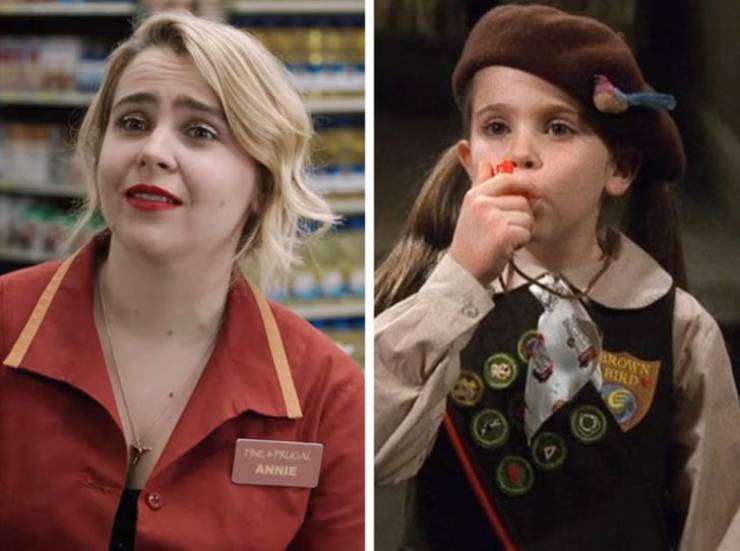 In Season 3, Episode 10 of Friends, Mae Whitman played a scout girl who broke her leg because of something Ross did, after which, Ross sold cookie boxes for her. When the actress grew up she became famous thanks to her main roles in The Perks of Being a Wallflower movie and the Good Girls series. 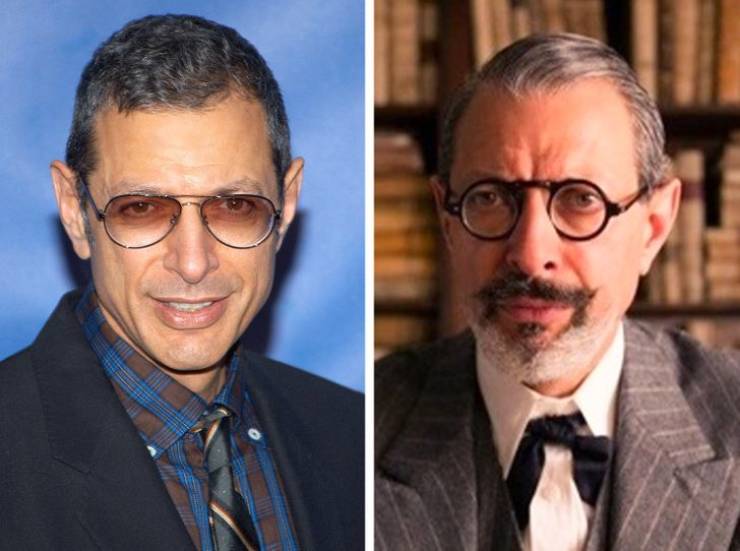 We know actor Jeff Goldblum by his role as doctor Ian Malcolm in the Jurassic Park franchise and as the main character in The Fly horror film. It’s hard to spot him in The Grand Budapest Hotel, where he played the Kovacs’ attorney.

Billy Zane in Back to the Future
5 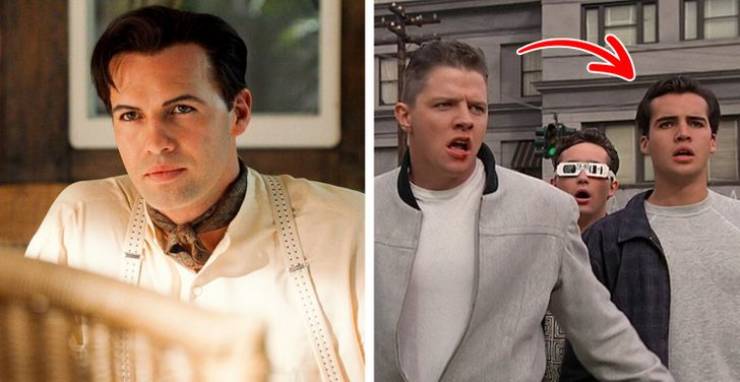 The role we really remember him by is when he played Rose’s fiancé in Titanic, but the first time he appeared on screen was in the first (and then the second) parts of the Back to the Future trilogy. A young Billy Zane played one of Biff Tannen’s (hooligan) friends. 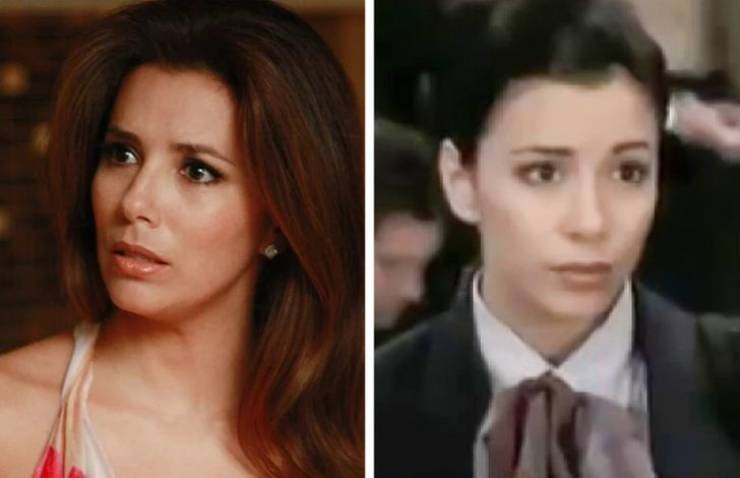 Eva Longoria’s career in cinematography started with her role as a flight attendant on the Beverly Hills, 90210 series. This happened in 2000. 4 years later, the actress hit the jackpot after having played Gabrielle Solis on the Desperate Housewives TV show that became world-famous. 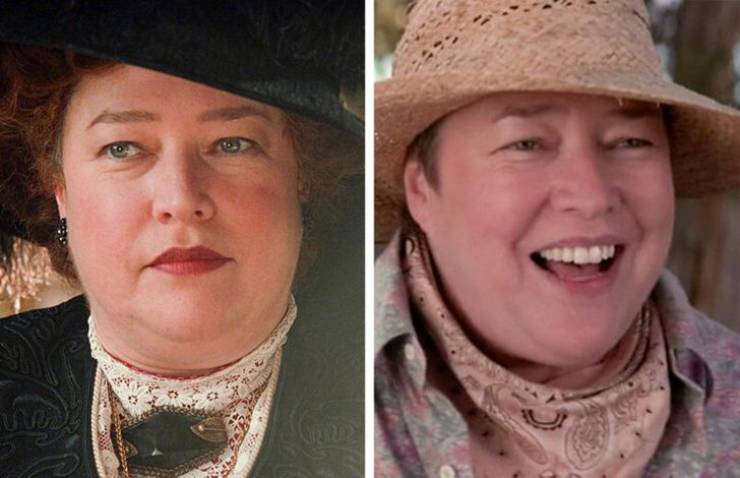 The actress, widely known to us by her role as Molly Brown in Titanic, and by her participation in movies like Dolores Claiborne and Misery, played a supporting character in Rat Race. Her portrayal of a kind-hearted but strange squirrel seller fits into the overall atmosphere of the flick quite well.

Tom Felton in Anna and the King
8 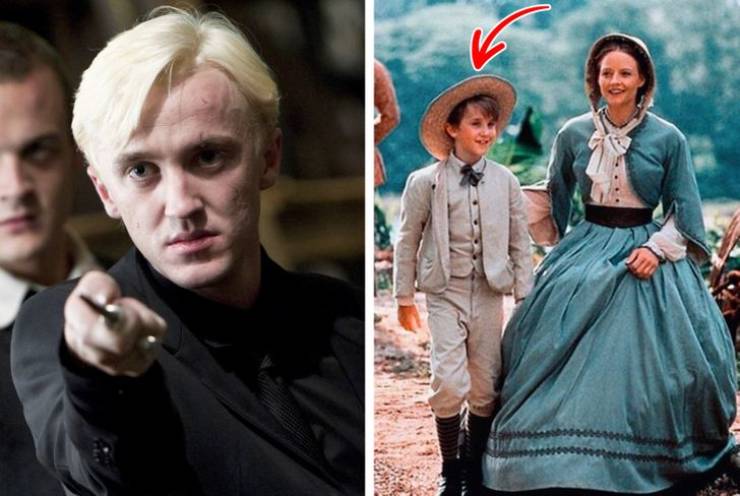 Before he played Draco Malfoy, Tom Felton appeared in the Anna and the King (1999) movie as a child. There, he played the son of the main character, Anna, played by Jodie Foster, who arrived together with her to Siam.

Jack Black and Giovanni Ribisi in The X-Files
9 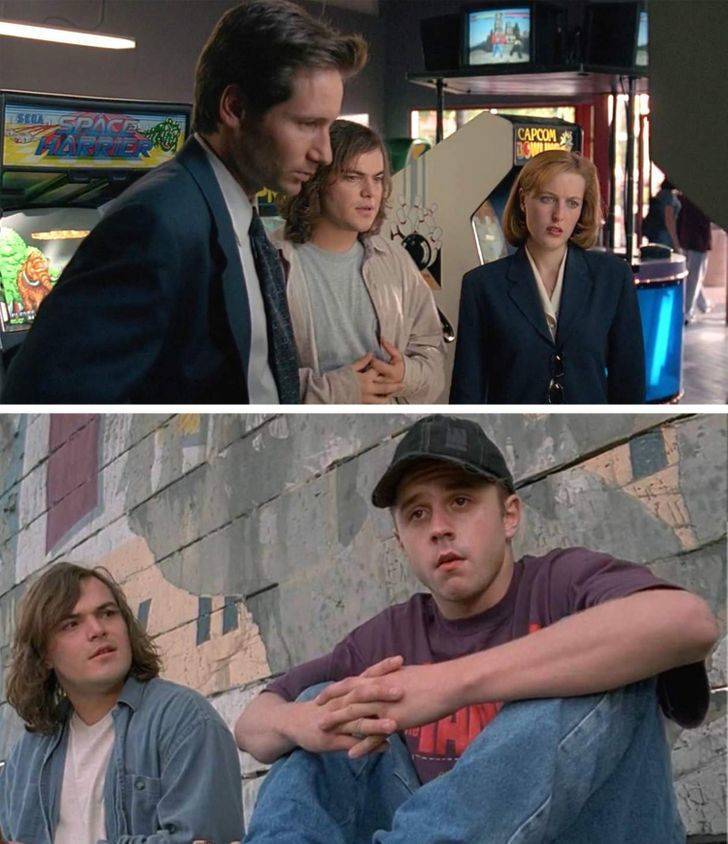 The comedian-actor and musician, Jack Black, who played main roles in The Holiday (2006) and Jumanji: Welcome to the Jungle (2017), appeared in the third season of The X-Files at the beginning of his career. Giovanni Ribisi, known for his role as Phoebe’s brother, in Friends also played in this movie together with Jack. 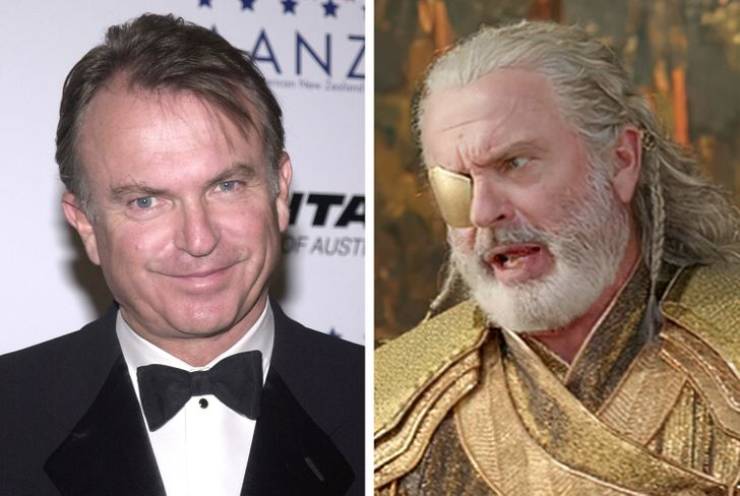 Sam Neill had a small role as the actor portraying the fake Odin in Thor: Ragnarok (2017). It’s hard to recognize the star of Jurassic Park and The Tudors series behind all the makeup and the beard. It’s also pretty funny that in an interview Neill revealed that he got totally confused while watching the movie itself (even the scene he was in). 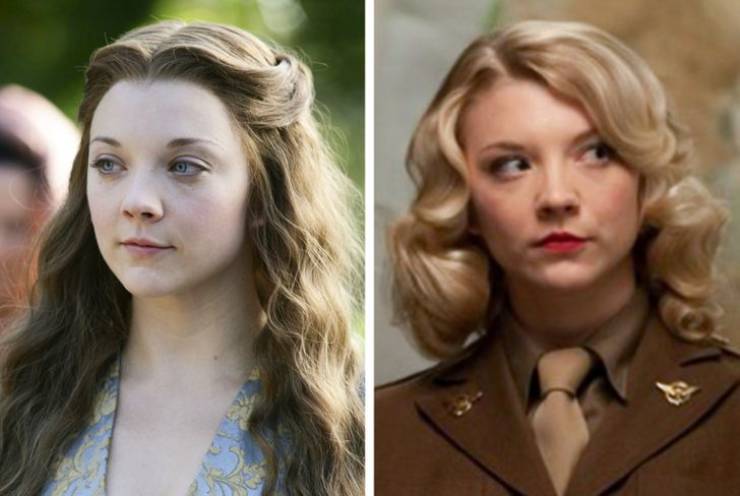 Natalie Dormer gained her fame after playing in the Game of Thrones and The Tudors series. But few people remember that she had the modest role of Pvt. Lorraine in Captain America: The First Avenger.

Christoph Waltz in Inspector Rex and in Ordinary Decent Criminal
12 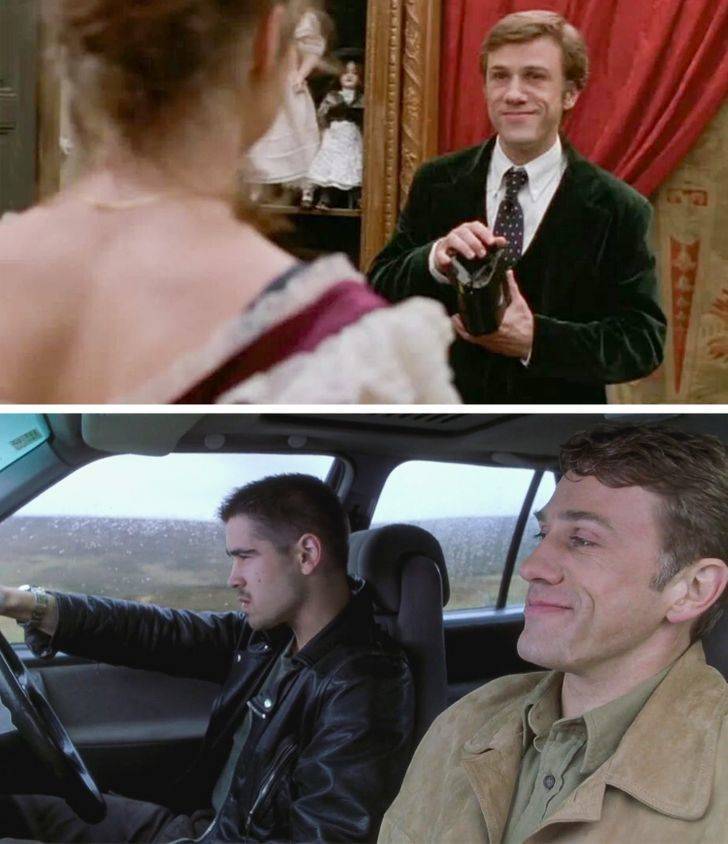 Christoph Waltz had been waiting for his fame for quite a long time. The actor was over 50 when Quentin Tarantino offered him the role in Inglourious Basterds, which brought him an Oscar and a Golden Globe Award. Before this moment, he had a chance to act in many projects including Inspector Rex (1996) and Ordinary Decent Criminal with Kevin Spacey. 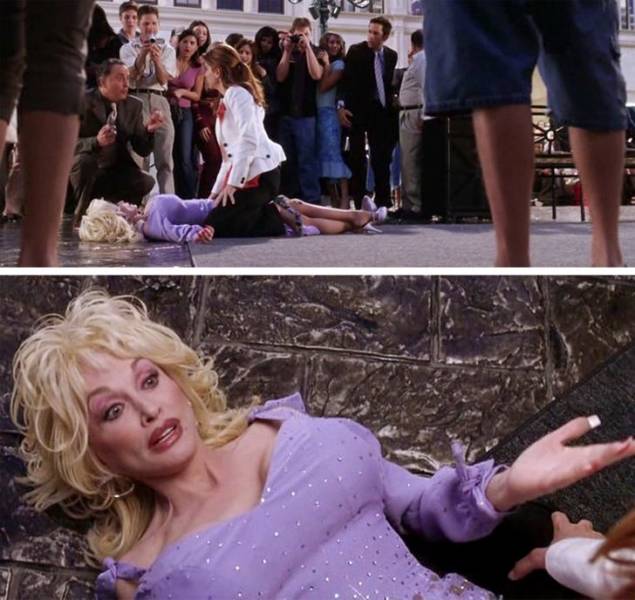 In Miss Congeniality 2: Armed and Fabulous, in the scene where Sandra Bullock’s character is chasing a woman who looks like Dolly Parton, the actress actually played herself. In order to persuade Dolly to take part in the movie, where the FBI agent knocks her to the floor during a chase, Bullock wrote her a personal letter which was abundant with the word “please.”

Eddie Murphy in The Nutty Professor
14 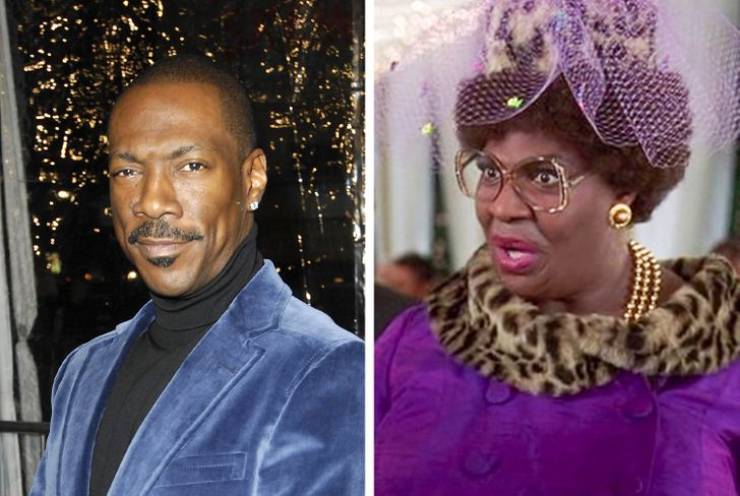 In the comedy, The Nutty Professor, apart from Sherman Klump and Buddy Love, Eddie Murphy also played the whole family of Klumps, including the mother and the granny, and even Lance Perkins. 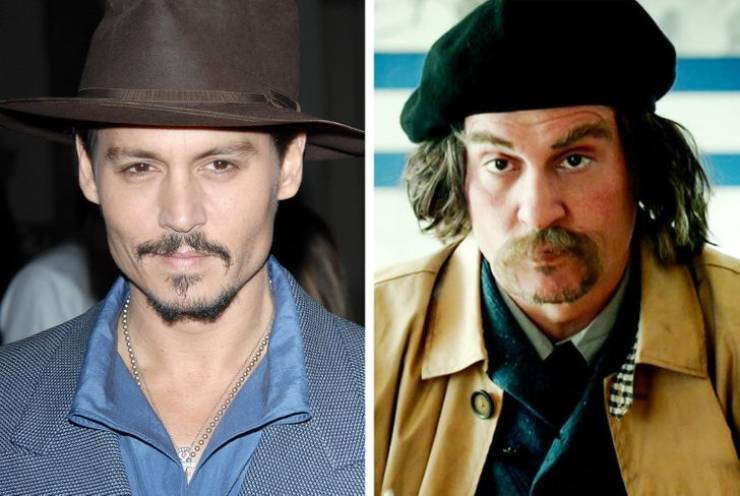 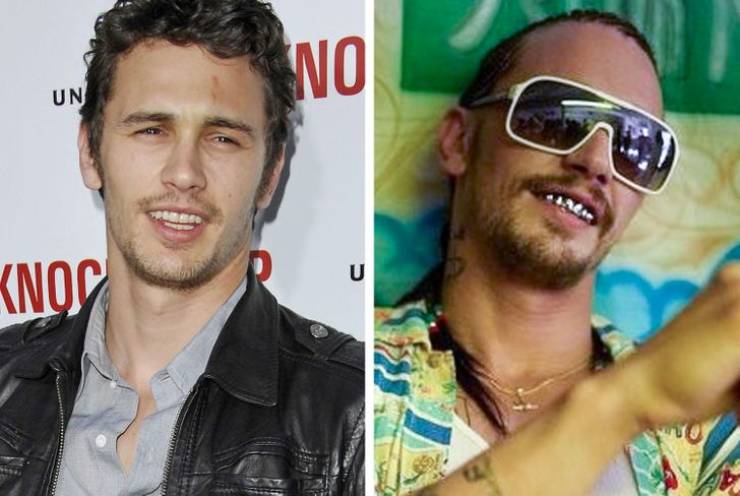