A series of animals with all sorts of bizarre natural deformities ;) 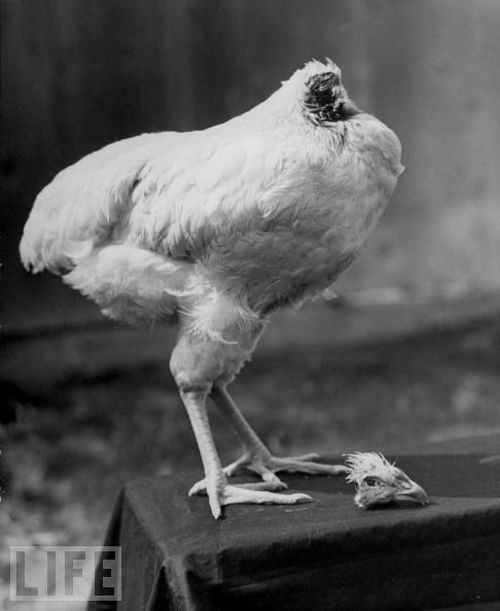 This is not a hoax: Following a non-lethal decapitation, Mike the headless chicken, later nicknamed "Miracle Mike," lived for approximately 18 months. Seen here in 1945, a little over one month after the beheading, Mike's body poses with his head 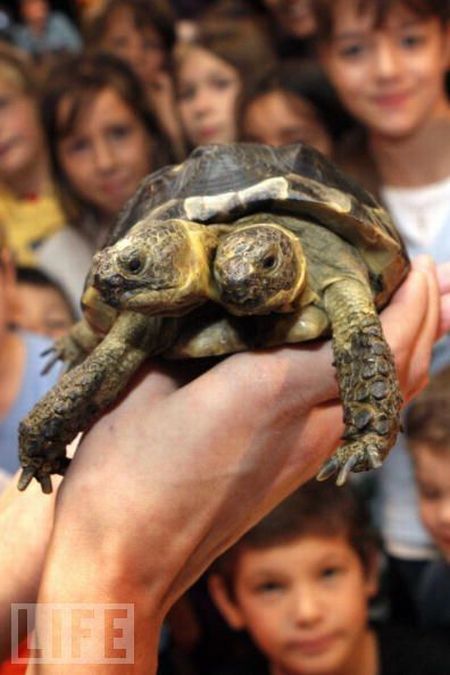 In 2007, visitors to the Geneva Museum of Natural History are fascinated by Janus, a two-headed Greek tortoise, on his 10th birthday. He's named after the two-headed Roman god 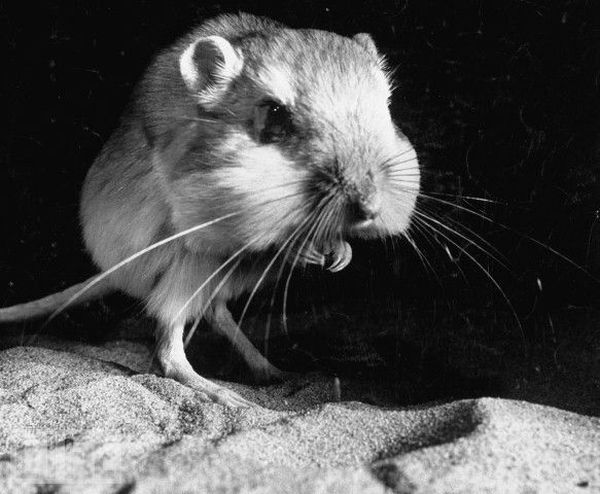 This weird little rodent gets its name from its huge cheek pouches, which extend back to its shoulders; it fills them with food or nesting material to take back to the burrow, emptying the pouches by turning them inside-out with its front paws 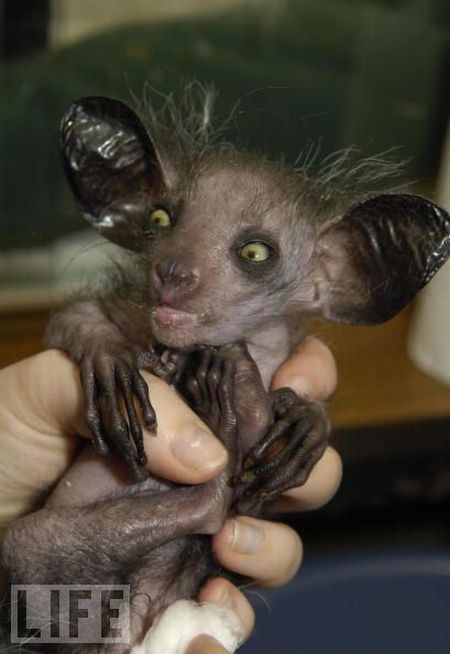 Kintana, a aye-aye from Madagascar, makes his first public appearance at the Bristol zoo in April 2005. This nocturnal primate has rodent-like teeth and a long middle finger, the better to catch and devour grubs 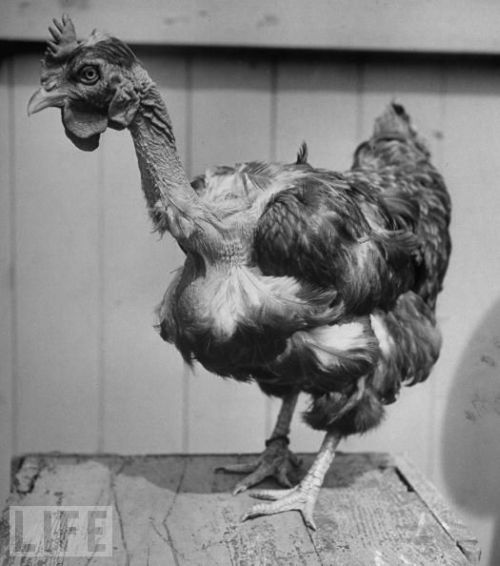 Yep, the name says it all: This breed of fowl, common in Europe, is naturally missing feathers on its neck 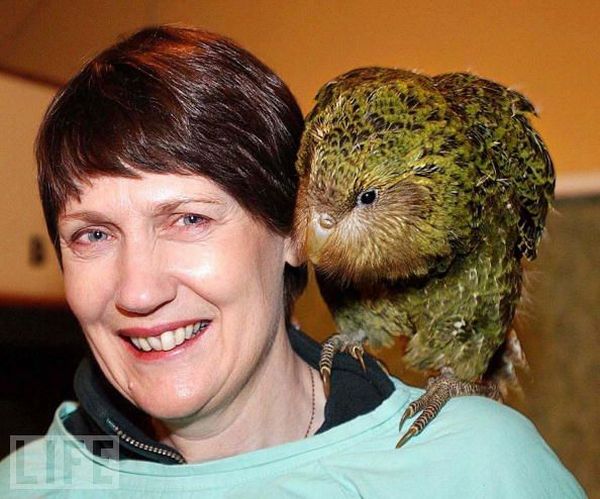 In 2002, New Zealand Prime Minister Helen Clark carries an 11-week-old kakapo chick on her shoulder during a visit to a hatchery in Auckland. Resembling an owl but technically a parrot, the bird is nocturnal, flightless, and distinguished by its yellow-green color 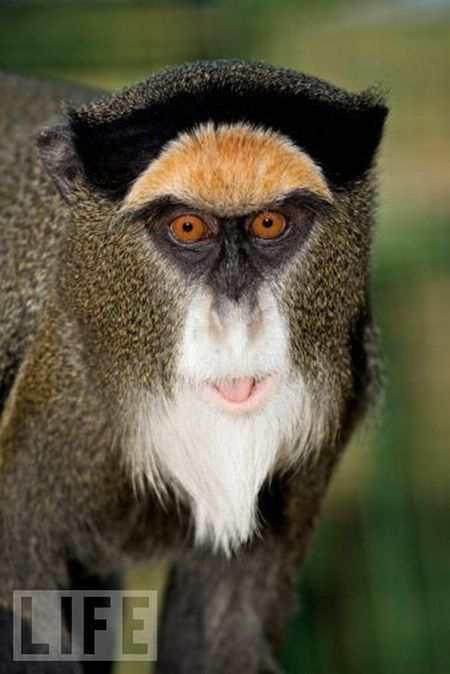 Think this African swamp monkey is colorful? You ain't seen nothing yet: Males of the species have a blue scrotum 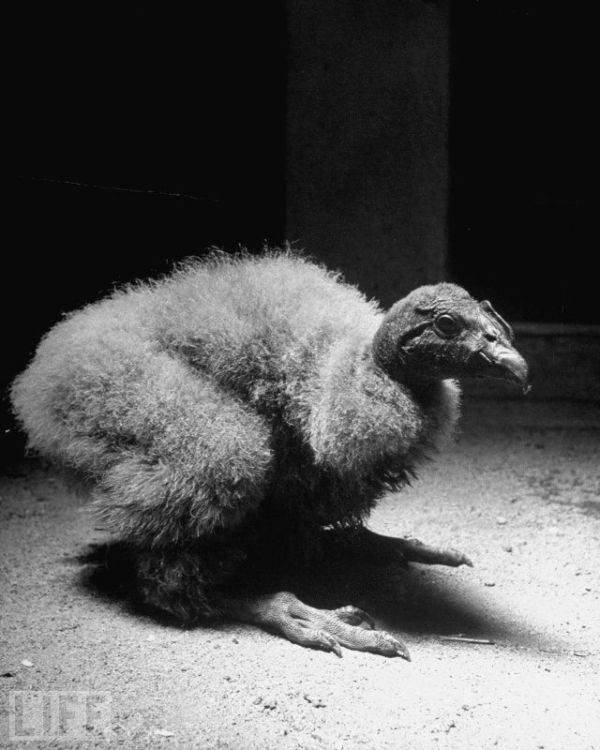 It's the largest flying bird in the Western hemisphere and feeds on carrion, with a particular taste for deer or cattle. Also: Get a load of the feet on this baby! 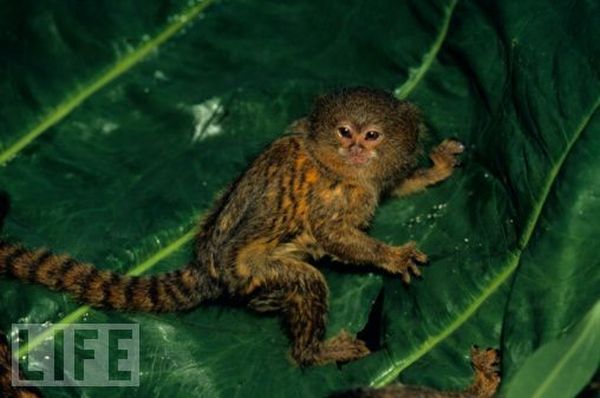 The tiniest monkey in the world ranges from 5.5 to 6.3 inches long. Almost every New York rat we've seen is bigger than that. 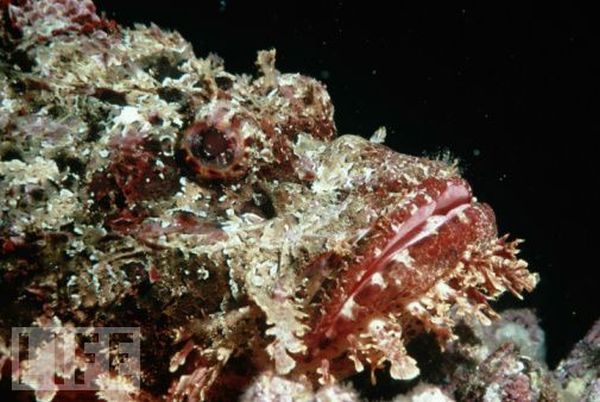 Don't get too close: This species of fish, most often found in tropical waters, has sharp spines coated with venomous mucus. Ouch! And also: ew 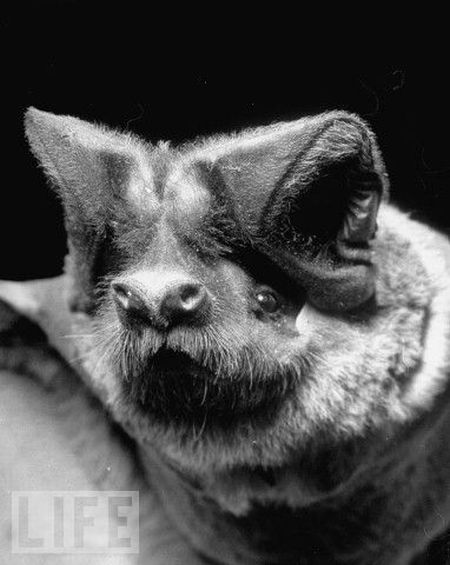 It has a tiny body but a wingspan of over 22 inches. Also, bats in close-up totally freak us out 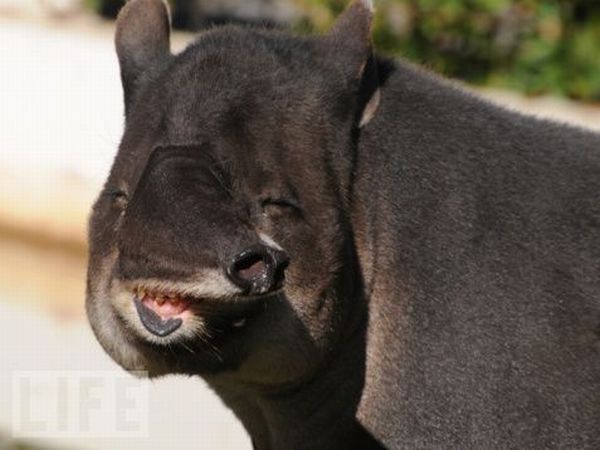 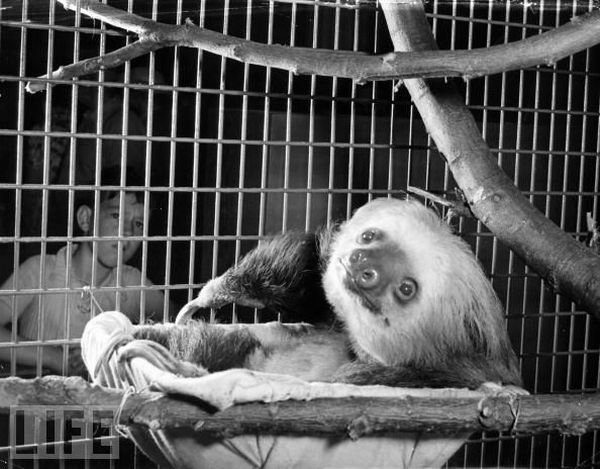 A sloth gives a thousand-yard stare at the Brookfield Zoo in 1938. Weird fact: This species' metabolism is so slow that it can take a month to digest food. Depending on where in the digestion process it is, up to 30 percent of a sloth's body weight can be its own, ahem, waste. 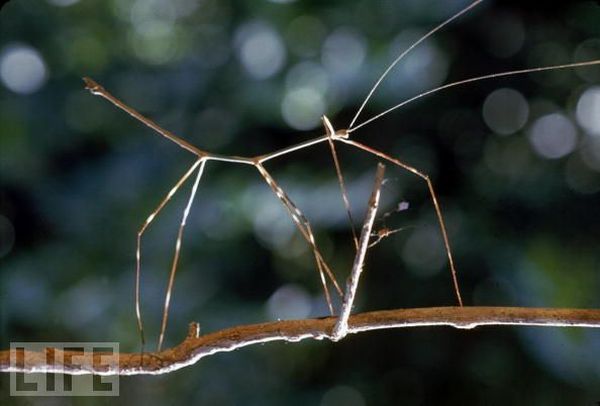 These insects take camouflage to the next level. Other bugs in the Phasmatodea order can look like tree bark or leaves. 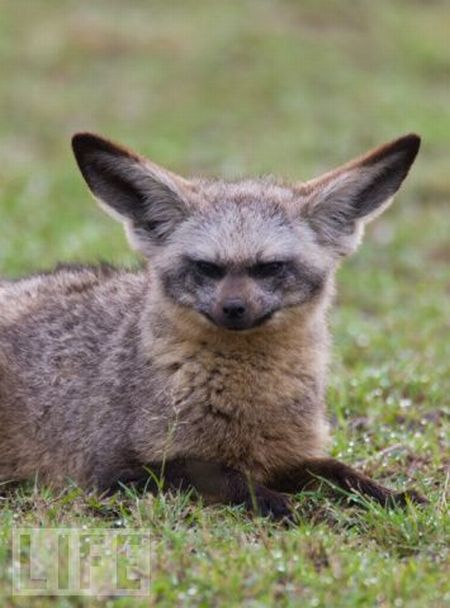 It's got huge ears but tiny teeth, with insects making up about 80 percent of its diet

A Sheep With Five Legs 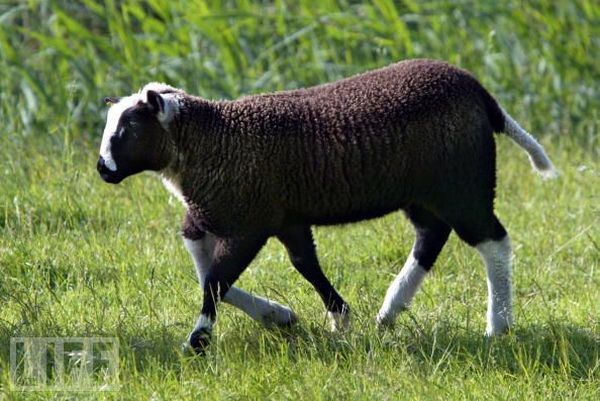 A two-month-old sheep with an extra limb is photographed in 2002 in Lage Zwaluwe, Netherlands. The farmer who owned the sheep said it limped slightly but did not appear to suffer from the fifth leg 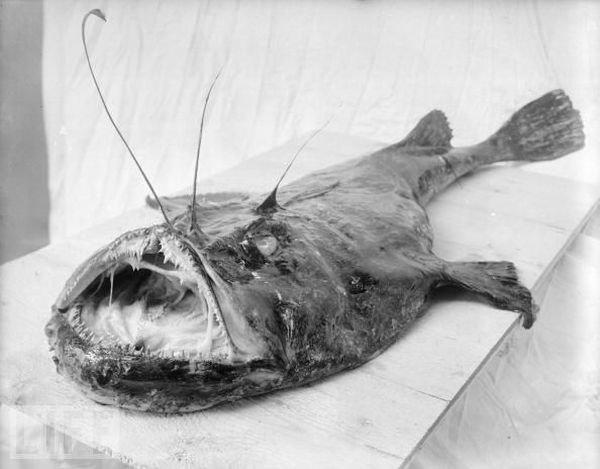 Ugly and gelatinous, the anglerfish has three long filaments sprouting from the top its head to lure in prey, which it swallows whole. Gulp 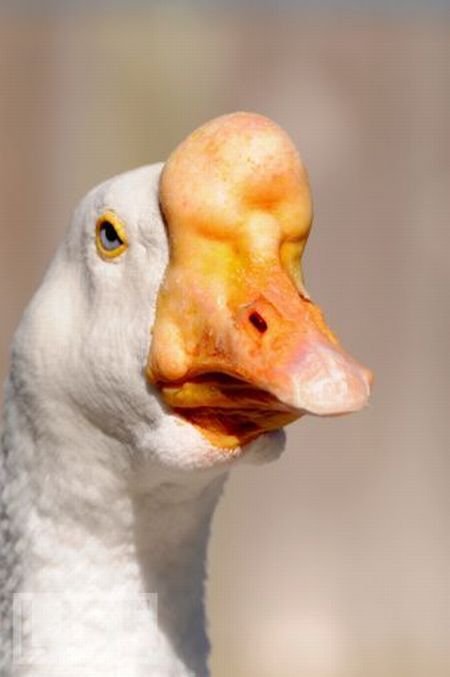 It may look strange, but it's very productive: a female can lay 60 eggs or more during the breeding season 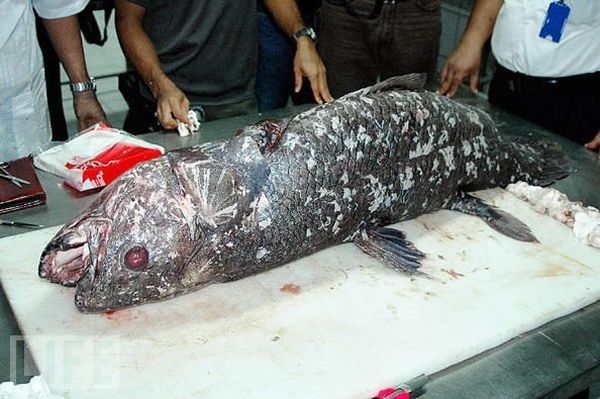 This very rare fish species is thought to have existed since the Cretaceous period. Average weight: 176 pounds 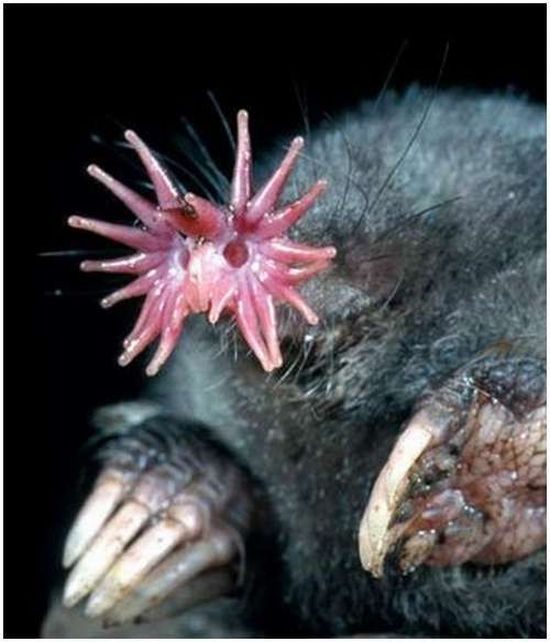 The Star-nosed Mole lives in wet lowland areas and eats small invertebrates, aquatic insects, worms and mollusks. It is a good swimmer and can forage along the bottoms of streams and ponds. Like other moles, this animal digs shallow surface tunnels for foraging; often, these tunnels exit underwater.
The incredibly sensitive nasal tentacles are covered with almost one hundred thousand minute touch receptors known as Eimer's organs. 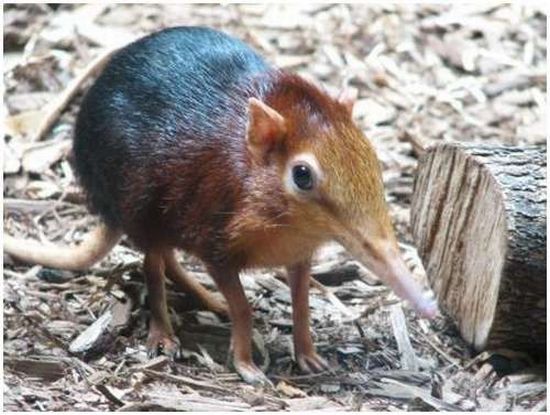 They are widely distributed across the southern part of Africa, and although common nowhere, can be found in almost any type of habitat, from the Namib Desert to boulder-strewn outcrops in South Africa to thick forest. 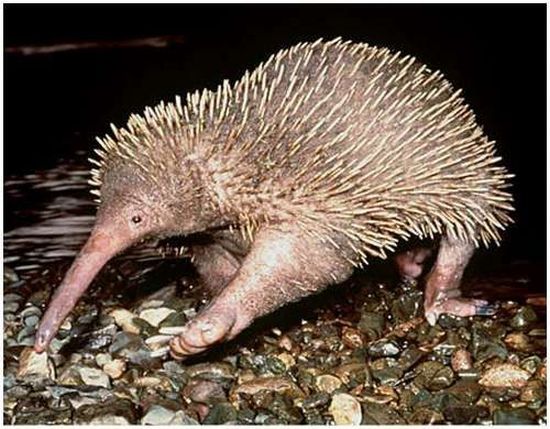 The long-beaked echidnas make up one of the two genera (Genus Zaglossus) of echidnas, spiny monotremes that lives in New Guinea. There are three living species, and two extinct species in this genus. Echidnas are one of the two types of mammals that lay eggs. 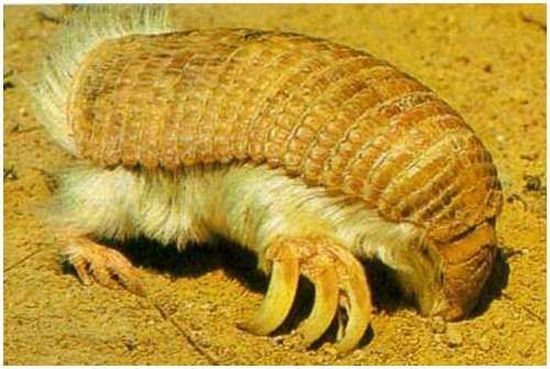 It is found in central Argentina where it inhabits dry grasslands and sandy plains with thorn bushes and cacti. It has the ability to bury itself completely in a matter of seconds if frightened.
The Pink Fairy Armadillo burrows small holes near ant colonies in dry dirt. It feeds mainly on ants and ant larvae near its burrow. 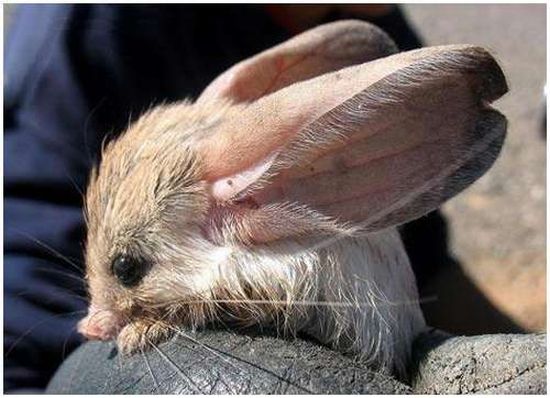 "The Mickey Mouse of the desert" - mouse-like rodent with a long tail, long hind legs for jumping, and exceptionally large ears. The jerboa, found in the deserts of Mongolia and China, is listed as endangered on the IUCN Red List. 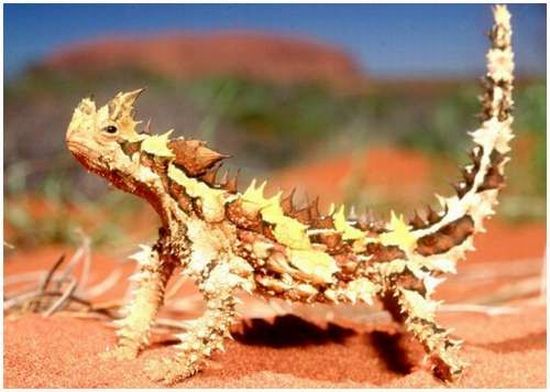 The Thorny Devil (Moloch horridus) is an Australian lizard. It is also known as the Thorny Dragon, Thorny Lizard, or the Moloch and is the sole species of genus Moloch.
An intimidating array of spikes cover the entire upper side of the body, these thorny scales are a defence against predators. Camouflage and deception may also be used to evade predation. It has an unusual gait, involving freezing and rocking, as it slowly moves in search of its preferred diet. 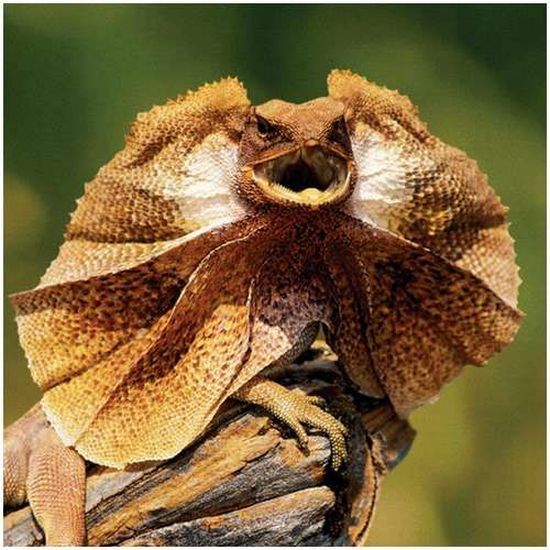 The Frill-necked Lizard, or Frilled Lizard also known as the Frilled Dragon, (Chlamydosaurus kingii) is so called because of the large ruff of skin which usually lies folded back against its head and neck. The neck frill is supported by long spines of cartilage, and when the lizard is frightened, it gapes its mouth showing a bright pink or yellow lining, and the frill flares out, displaying bright orange and red scales. The frill may also aid in thermoregulation. 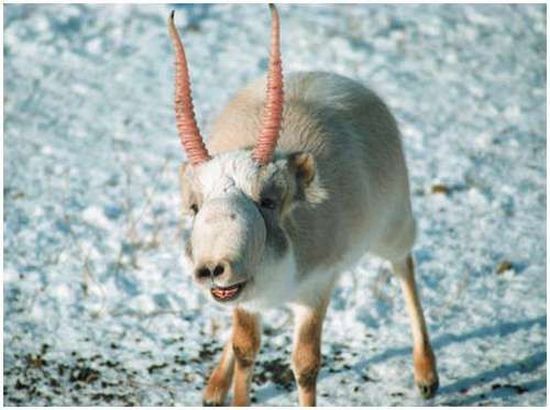 Saiga is classified as critically endangered by the IUCN. There is an estimated total number of 50,000 Saigas today, which live in Kalmykia, three areas of Kazakhstan and in two isolated areas of Mongolia.

Buy cheap software 8 year s ago
X29N2Q I was looking for the report in Yandex and suddenly came across this page. I found a little information on my topic of my report. I would like more, and thanks for that..!
Reply