Here’s a little but very interesting collection of retro ads.

I know that a lot has changed compared to the 50’s and that our society was quite sexist but I didn’t know that it was sexist to that extent.

But despite all the sexism in the ads they are also funny. Don’t get me wrong, I mean, it’s a good thing that we evolve and can laugh at our stupidities made in the past. I am pretty sure, our descendants will laugh at our today’s stupidities in the future.

jooser 10 year s ago
I'm a woman, and I believe that if we still had a few of these morals and beliefs, you wouldn't see the girls that we have today - sluts, party animals and generally rude bitches.

Gina 8 year s ago
Yes, there are many girls like that unfortunately, but there are also a lot that are not like that at all. Don't blame the behavior of these girls you speak of on this- that is their issue, their fault.
Reply
0

Chan 10 year s ago
I am a woman too and I think you're just plain stupid but hey, feel free to do what you like - Have a happy life cooking and cleaning!
Reply
0

TEST 10 year s ago
Iam a man, I think what is shown here is absolutely wrong.
but also what is happening these days is also unacceptable.
Reply
0

K 8 year s ago
Men have been screwing around for thousands of years and now things are evening up the behaviour is unacceptable- HA! Thank god women wised up.
Reply
0

olla 10 year s ago
Ads today are no better, we continue objectifying women (and men). You can say that Axe ads are merely satire or acknowledge that they just as sexist as any of these ads.

Feminism is dead... we're still foisted the same sexist stereotypes. The next post should be a compilation of Target Women by Sarah Haskins.
Reply
-1

mm 10 year s ago
Yeah. Today's ads are sexist, but hey that IS normal. Sex runs the world. Not money like some stupid people say... At least now both women and men are being objectified

SmarterThanYou 9 year s ago
Idiot learn some English first the open your smelly mouth lol
'Sexist' does not mean 'sex' or 'intercourse'. Seriously, you must have an IQ around 20% I think!
Reply
0

Enter your name 9 year s ago
Do you not mean 'then open your smelly mouth'? Someone else needs to cater to their own lack in English before addressing others I think.
Reply
0 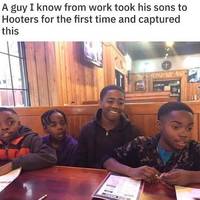 Jonas 10 year s ago
bring those days back
Reply
0

Smokey 10 year s ago
I am a man, and I think the add that says &#34Blow in her face and she'll follow you anywhere" is the greatest thing since sliced bread.

gigantes 10 year s ago
mm,
Sex runs the world. Not money like some stupid people say...
wrong on both counts.

debt runs the world, which is what virtually everyone, everywhere is increasingly discovering. although those in the US and europe certainly have a head start!
Reply
0

Holly 10 year s ago
Jooser, I'm a woman and I completely agree with you!
Yes, it shouldn't be completely how it was, we need the vote, we need the right to be independent, but if we were brought up with the same teachings that women were back then, then there wouldn't be so many unwanted children, so many STD's, and so many whores.
Reply
-1

Wawawiwa 10 year s ago
I'm a guy and I find it hard to believe those were actually used. You mean it is not photoshop?

Sorry sweetie but men are just as responsible as women. Maybe men should stop being whores and there would be unwanted pregnancy and STDS.

So funny how women tend to be the biggest perpetuators of sexism.
Reply
-1

Julie 10 year s ago
I think theres nothing wrong with women staying at home, its great we women are beteer at housework and raising kids while men are mire smart and strong
Reply
0

Carla 10 year s ago
Quote: Holly
Jooser, I'm a woman and I completely agree with you!
Yes, it shouldn't be completely how it was, we need the vote, we need the right to be independent, but if we were brought up with the same teachings that women were back then, then there wouldn't be so many unwanted children, so many STD's, and so many whores.

Wow Holly, I think you might actually be more oppressive than these ads! You've a very warped concept on life if you think that having the same upbringing as the women of the 1950s will solve problems such as "whores", "unwanted children" and "STDs".

Firstly, there have been whores since the dawning of time. They just weren't as open about it or swanning around in the public like the Jodie Marsh's of today.

Secondly - unwanted children. Have you ever heard of the Magdalene Asylums of the 1700s?! Don't carry on that unwanted pregnancies have only occurred since women got the right to vote and be treated equally. Pregnancy out of wedlock has been happening for years and I refuse to believe that because women stopped cleaning and cooking for a living, they suddenly went "Hooray! Now I can go out and have unprotected sex!"

And your final point - STDs. Well Holly, I hate to inform you but you can't blame that one on the "whores" of post 1950s feminism. STIs (they have been relabelled infections instead of diseases, funny how things become more correct with time eh?), have been around far longer than our parents or our parents' parents. But with medical advancements of the last century we can now diagnose and treat more of them.

So really Holly, if you want to put a stop to the problems you say stem from a liberal upbringing, I think you're going to have to do more than buy a woman a hoover.
Reply
1

Damiana 9 year s ago
I applaud you, Carla.
Reply
0

Buy cheap software 9 year s ago
wREqbx I am amazed with the abundance of interesting articles on your site! The author - good luck and wish you the new interesting posts..!
Reply
-1

Enter your name 9 year s ago
I think holly was trying to say is if sex wasn't plastered everywhere and women were brought up in a 50's like culture, then there would be more women of value. In a sence I agree, I think if our culture wasn't oversexed like it is then you would get better mannered people. Men and women are more whorish now adays and kids see that. Adults have become selfish and don't care that children see this and kids attempt to explore it. Kids are getting pregnant as young as 12. That is not okay. Kids want to grow up and be like adults, so they have sex like adults. There needs to be limits as to how far commercials go, and movies as well for that matter. I kinda wish for the 50's culture to come back and take hold of all this chaos, without the sexism and racism.
Reply
0

Saerain 9 year s ago
Teen pregnancy rates have only been dropping. In the US, they've dropped 40% in just the last two decades.

We still lead the developed world in teen pregnancy rates thanks to the Bible Belt, but don't think for a minute that rates have been rising just because you're hearing about the problem more. We're just finally paying attention to it as a problem.

Hell, it's only in the last 100 years that we raised ages of consent around the country over 13.

Screw the past. It sucked tremendously.

And I don't understand why you're so quick to attribute having ‘sex plastered everywhere’ with problems like teen pregnancy. The US is the most conservative about sexual imagery of all the developed world. No other major country views sex as so dirty and taboo as ours, and yet our Bible Belt tops the charts for teen pregnancy. Meanwhile, in highly sex-exposed societies like Japan, the sex industry capital of Asia, birth rates are so low that the population is shrinking. I recommend rethinking your conclusions.
Reply
-1

Daniela 9 year s ago
It is very interesting to see how some people can read, but cannot understand the meaning of what is written. Carla is one of them, obviosly did her Wikipedia homework on the Magdalene Assylum and the STD's name upgrade, but she failed miserable understanding what Holly wants to say in her statement. Yes, we will never see the end of STDs, and there will always be hores, and single or abandoned mothers, anwanted children, and people that won't pay their bills...but it would be a better world if we had stronger moral values (or ethics for those who don't like the word moral). There is nothing wrong in being a house wife if she chooses to be one, adored by her husband and children...what is wrong is trying to "be happy" at our childrens expense, doing the "popular" thing instead of the right thing, to the point of becoming disposable because we are so available, that we lost our value as women, and human beings......
Reply
0

emily 9 year s ago
People that have STI's now and unwanted pregnancies were taught and bought up by people born and raised in the 50's/60's/70's.... so dont go preaching to us!!
I'm 17 and I don't want children until I'm past 25 with a career a house and a loyal husband! If I get an STI on the way does that make me a whore or a dissapointment to others?! No, it's just another person who made a mistake, how many of you havent made a single mistake?!
Back Off!
Reply
0

yasch 8 year s ago
equity must be sought not the morals.on the other hand sexism define women into a nerrow framework which is absolutely wrong.that was the point .
Reply
0

Hellen Borgsheguish 8 year s ago
I think there right women deserve all this
P.S. I Like Apples
Reply
1

tom.sane.94 7 year s ago
1) Many of these are obviously fake
2) Many of these aren't sexist. "Most men ask 'is she pretty' not 'is she clever'" is not sexist, but more of a fact
3) These really aren't any more audacious than the ads of today
Reply