Boy Who Spent His Life in a Bubble (24 pics)

Very sad and tragic story of a boy who had to live in a sterile bubble all his life (even though it was short) until he died.

The boy on the photo, David Vetter, was the second son of the couple David Joseph Vetter Jr. and Carol Ann Vetter who had already daughter Katherine. Their first son was born with a defective thymus, a gland which is important in the functioning of the immune system, due to a genetic condition, SCID. Several weeks after he died. Doctors said that every other son of David Joseph and Carol Ann Vetter had 50% to be born with the same condition. They proposed them to place their next child in a sterile isolator until they could perform an operation of a bone marrow transplant. Katherine was supposed to be a donor. David’s parents most of all desired to have a boy to carry their family name. 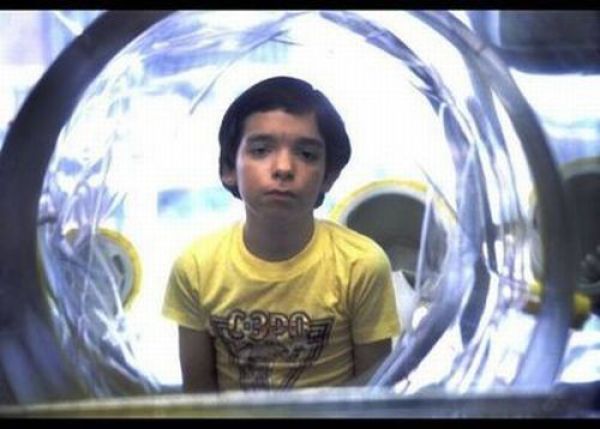 But the bad news came after the birth of David. The doctors discovered that his sister Katherine wasn’t a match for a bone marrow transplant and thus couldn’t be a donor. 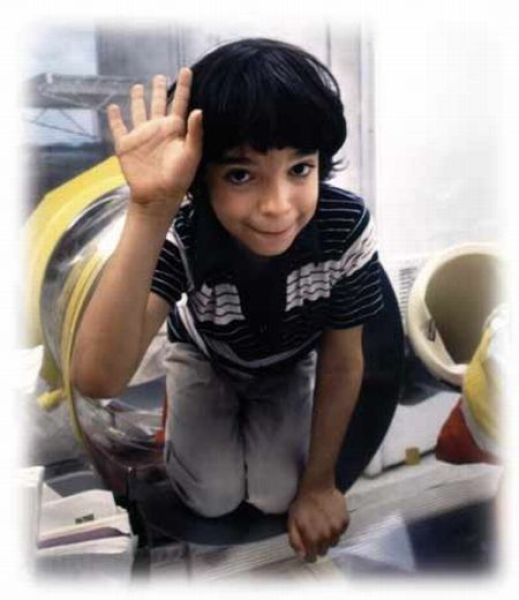 After the birth, in 1971, only 10 seconds later, David was directly put into his germ-free cocoon prepared for him to spend his life there.

Before anything could get into his bubble, it was disinfected: food, water, air, clothes, diapers.

The only contact with David was possible through special plastic gloves attached to the walls.

The motors that kept the bubble always inflated were very loud and it was kinda an obstacle for David to talk to other people, to hear and listen. When David was three years old, a playroom was added to his bubble but he refused to go there. So the psychologist Mary Murphy convinced him to go there by asking to take a look at her goldfish she held. 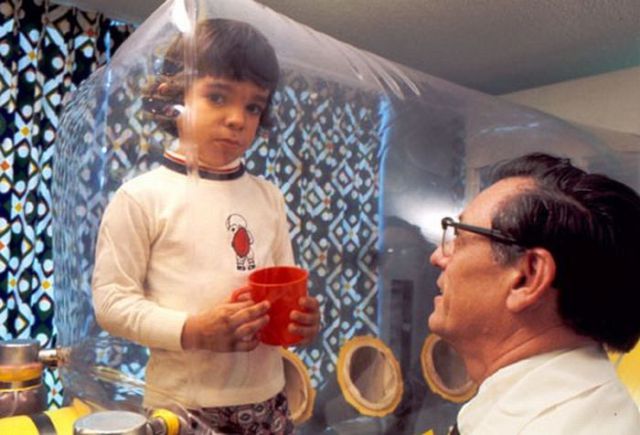 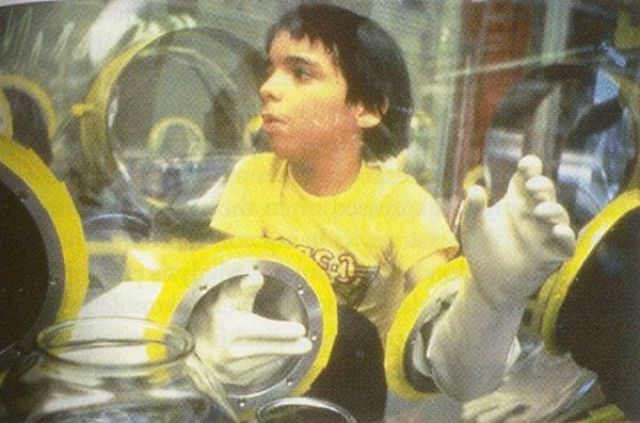 His parents tried to make his life as normal as possible: he studied and watched a TV that was installed in his bubble. But David desired to be the part of the world he couldn’t be and this situation began to be unbearable for him. He even once said: "Whatever I do depends on what somebody else decides I do. Why school? Why did you make me learn to read? What good will it do? I won't ever be able to do anything anyway. So why? You tell me why."

In 1974 when David was 3, he could spend several weeks in the house of his parents where his bubble was transported. He was close with his sister Katherine who used to sleep in the same room when he was in the house. But sometimes they could even fight  with each other using those special plastic gloves. Once, David punched her hard and went to another side of the bubble where Katherine couldn’t reach him. But she always had her way, she threatened him to unplug the bubble and even did it few times. But even if the primary bubble deflated, he had a separate area he could go into while he asked her to plug the bubble back in. 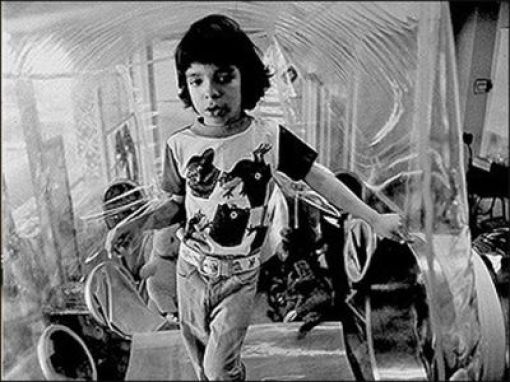 David had friends and classmates who came visit him. One of his friends even arranged the showing of Return of the Jedi at a local movie theatre where David was transported in the transparent bubble that was used to transport him from hospital to his house.

When David was four years old, he started poking holes in his cocoon. He used a butterfly syringe that was left in his bubble by accident. That’s when his doctor told him about the danger he runs by doing it because of his condition. This day David for the first time discovered his special condition.

At only five, David completely recognized his difference and was afraid what the future held for him.

Although the press created an image of a healthy young boy trapped in a bubble, David was psychologically unstable, primarily due to the lack of human contact, and the seeming hopelessness of his condition. Normally presenting a painstakingly polite facade, he was increasingly angry and depressed about his condition and would act out, expressing rage in a variety of ways, including once spreading his own excrement around the bubble. David was also extremely anxious about germs, including repeated nightmares about the "King of Germs". 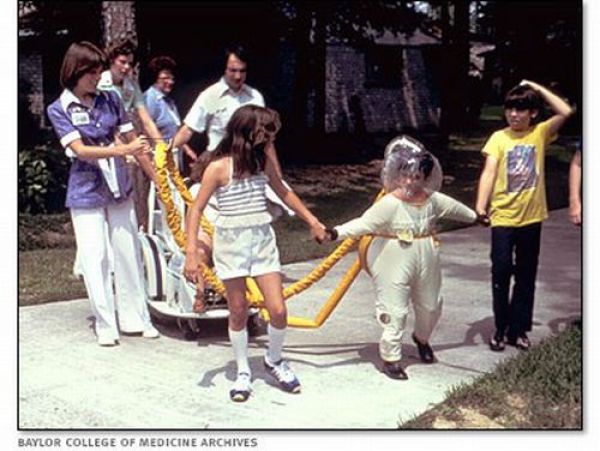 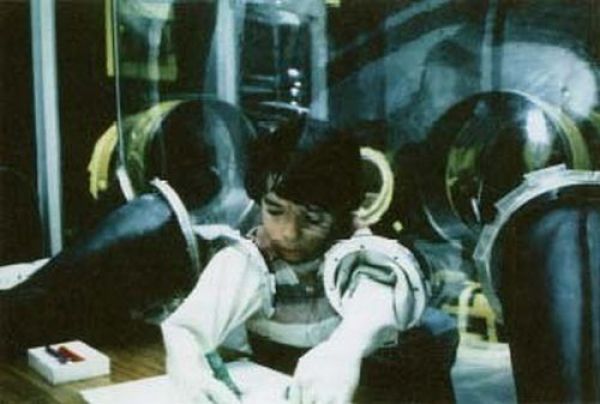 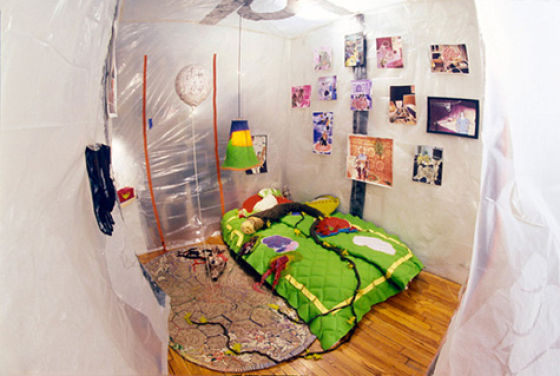 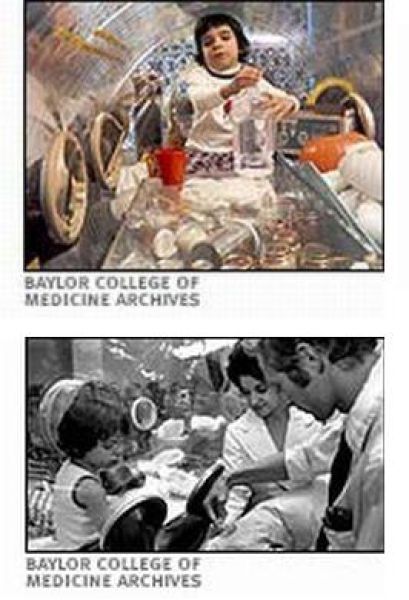 In 1977, researchers from NASA used their experience with the fabrication of space suits to develop a special US$50,000 suit that would allow Vetter to get out of his cocoon and walk in the outside world. The cumbersome suit was connected to his bubble via an eight-foot (2.5 m) long cloth tube so that he could venture outside without risk of contamination.

On the day David, then around age 6, was to receive his gift, many scientists and the press attended to watch the "Bubble Boy" emerge from his bubble. To everyone's disappointment, David refused to wear the suit for the press. A few hours later, after the press had left, he crawled down the tube, but upon pushing his head into the suit he let out a scream and exclaimed, "That's the kind of place where germs live!" He had never taken more than six steps in any direction.

Later he became more comfortable with the suit, but only used it seven times before outgrowing it, never using the replacement suit provided for him by NASA. Both suits were sewn by GE seamstress Alyene Baker. A few years later, when Vetter watched the John Travolta movie based on his life, he laughed when the boy based on him could wear his similar NASA suit right into the bubble without sterilizing it first. David's suit is now on display at the Smithsonian Institution. 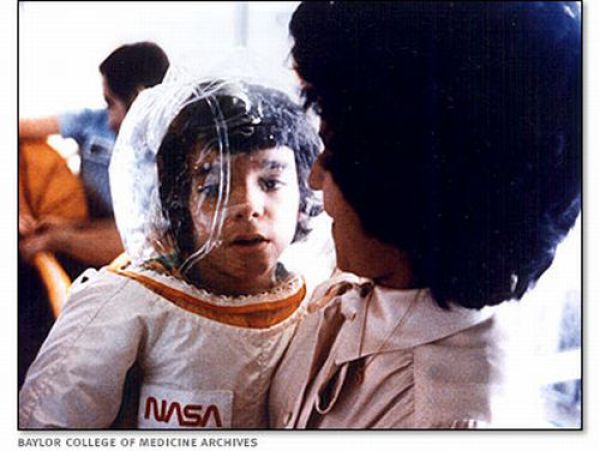 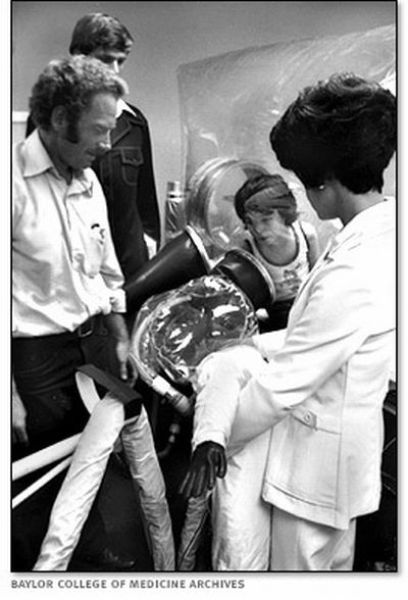 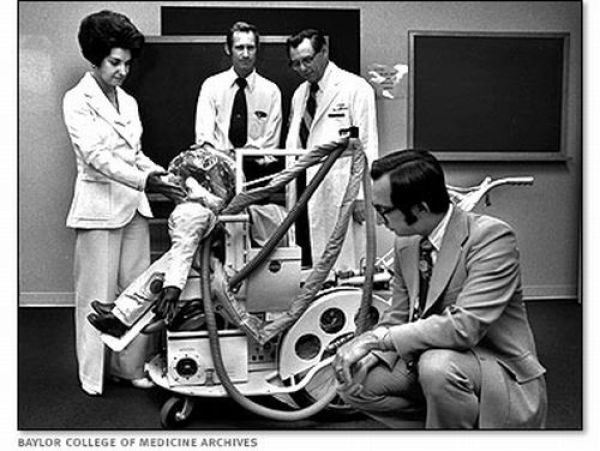 After many years, David's situation became unbearable. The small expectations for finding a cure were still the same as a preteen as when he was a baby. Doctors feared that as a teenager he would become even more unpredictable and uncontrollable. The U.S. government spoke about cutting the research funding as it showed no results and there was a growing debate over the ethics of that experiment, with public opinion becoming less supportive of the project. A total of more than $1.3 million was spent on David's care. 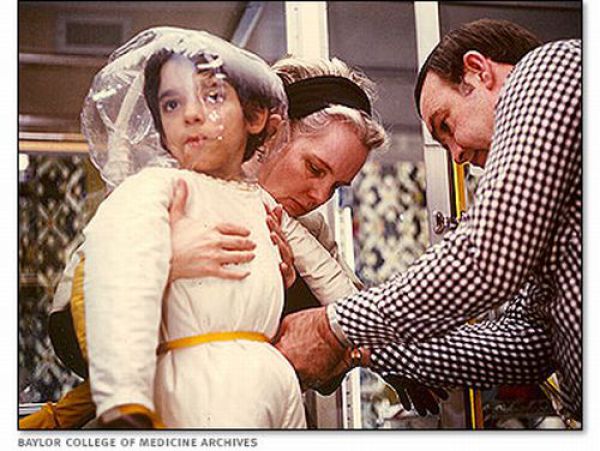 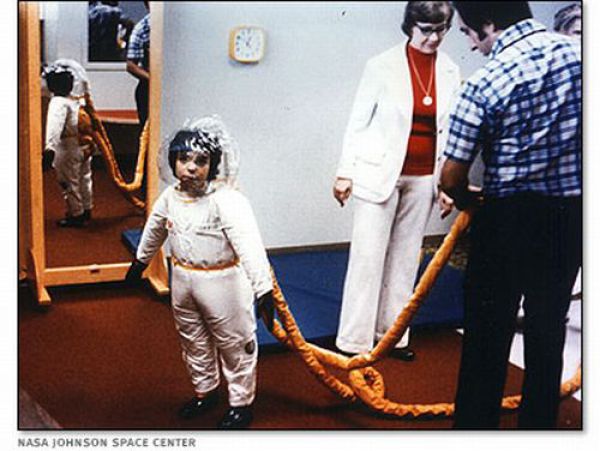 The 1984 transplant operation went well, and for a few months hope was high that David would be able to leave the bubble. However, a few months after the operation, David became sick for the first time in his life; he started having diarrhea, fever and severe vomiting from intestinal bleeding. These symptoms were so severe that David had to be taken out of the bubble for treatment. In response to a direct question from his father on whether he wished to be taken out of the bubble, David replied, "Daddy, I will agree to anything to feel better." Out of the bubble, he continued to get worse and sank into a coma; his mother was able to touch his skin for the first and last time before he died. He died 15 days later on February 22, 1984 of Burkitt's lymphoma at the age of 12. 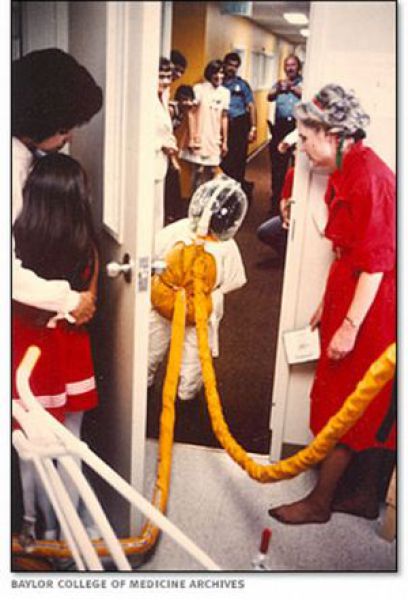 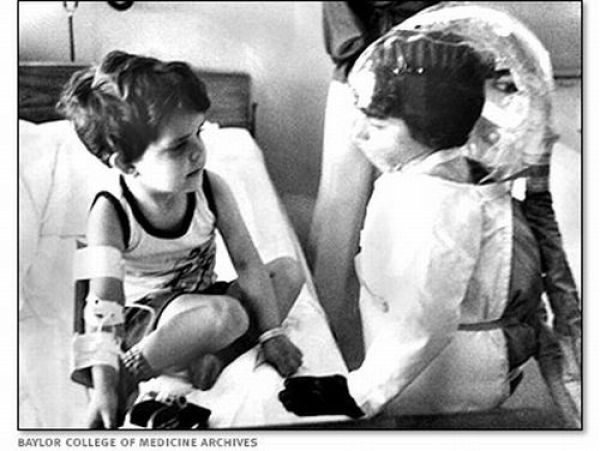 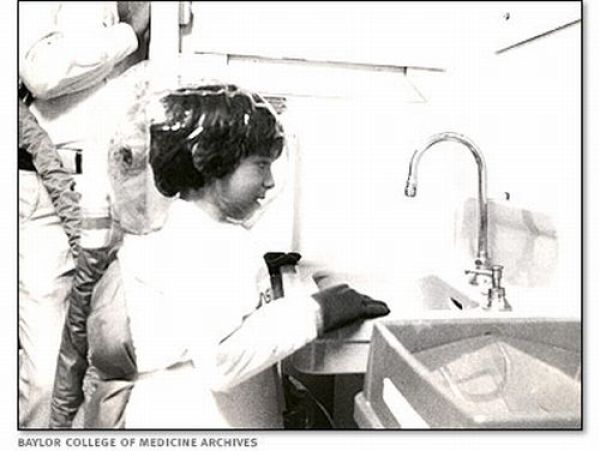 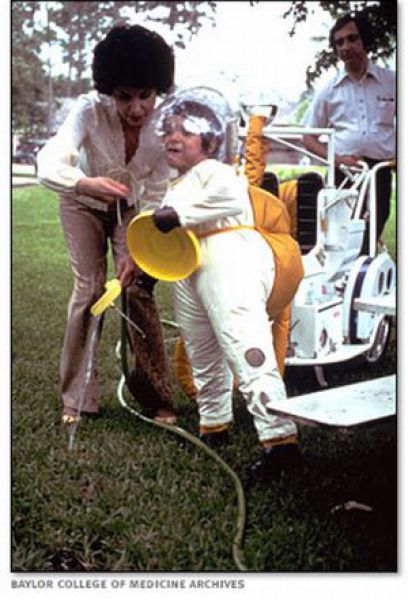 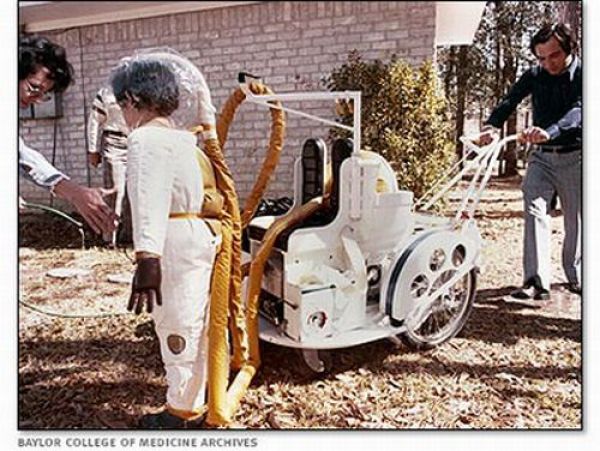 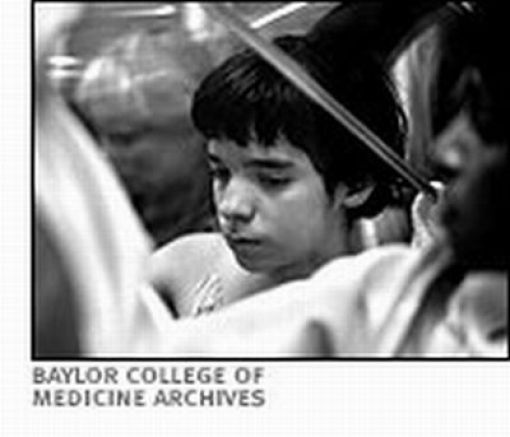 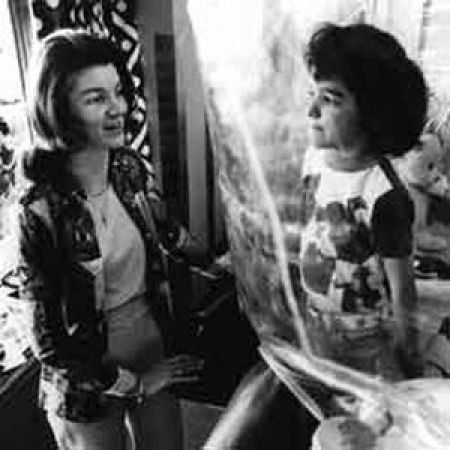 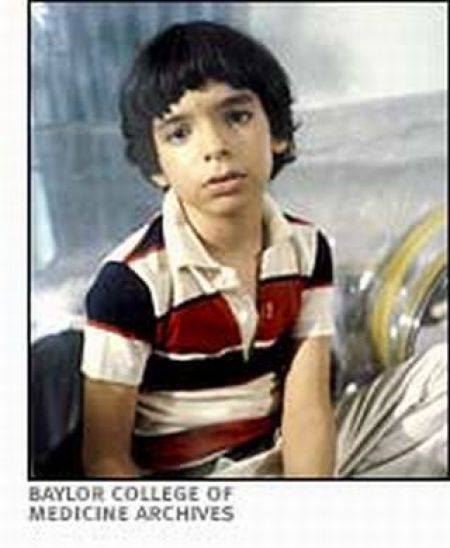 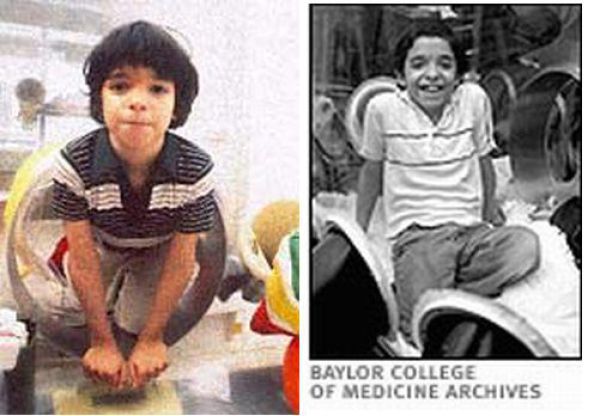 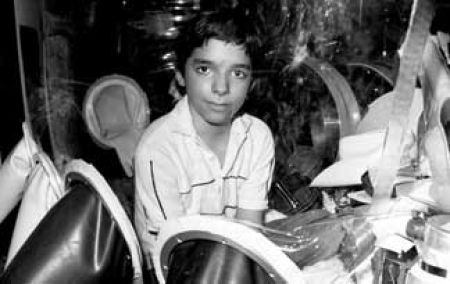 Peanut 12 year s ago
Why do parents bring children into the world when there is such a huge risk of them suffering and then dying at a young age? How can they be so selfish? Cystic fibrosis is one of the worst genetic diseases. One seventeen yr old stated it was like trying to breathe through a straw. His parents knew they both carried the gene, and yet they still went ahead and had a kid, knowing their child will die by suffocation, or his lungs will hemorrhage and he will bleed to death. It was disgusting. In one generation, the world could be rid of some of the most horrible diseases, if people with defective genes would just quit breeding.
Reply
-1

nebula 12 year s ago
Couldn't agree more peanut but unfortunately the world we live in is over run by religious fanatic that preventing important medical research to be done and frown upon abortions or pregnancy terminations...
Reply
0

Downstrike 8 year s ago
Come on people, give the family and doctors a break! No one in 1971 realized what this boy's life was going to be like. It had never been done before.

Meanwhile, religion has nothing to do with parents' desire to preserve the lives of their children, or doctors' fulfilment of their Hippocratic Oath to preserve life. Antitheistic fanatics who are parents or doctors are just as apt to react that way, as religious fanatics. You're human too, you know.
Reply
0

poor little boy,
his situation was so grim,
very depressing,he is in a better place now

dsfaggh 12 year s ago
Oh that sucks so much... poor kiddo.

hh 12 year s ago
Weed out the useless ones, this child should've died soon as he was born. There is no reason for people like this to live.
Reply
0

Because 10 year s ago
I knew David, I lived down the street from him. We would always visit him on Halloween, he would pass out candy. I wished I would have come over more often to play. RIP David
Reply