How to Talk to Customer Service Reps (7 pics)

Believe it or not there is a right and a wrong way to talk to a customer service rep with your complaint. At least there is if you listen to this post. The wrong ways are very funny. Surprisingly the right ways make some sense. 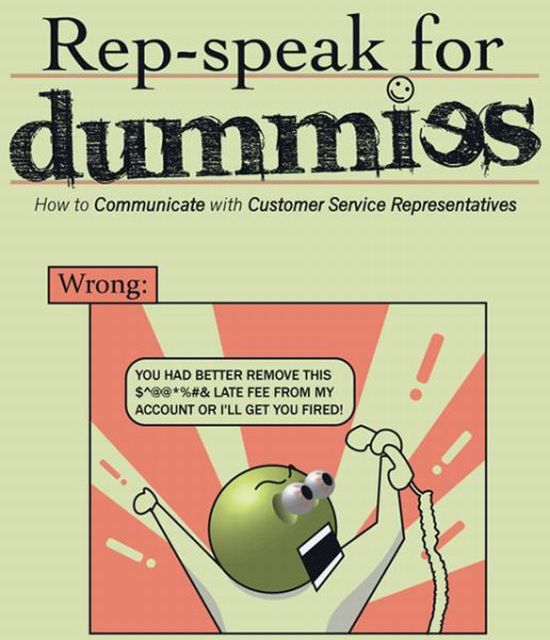 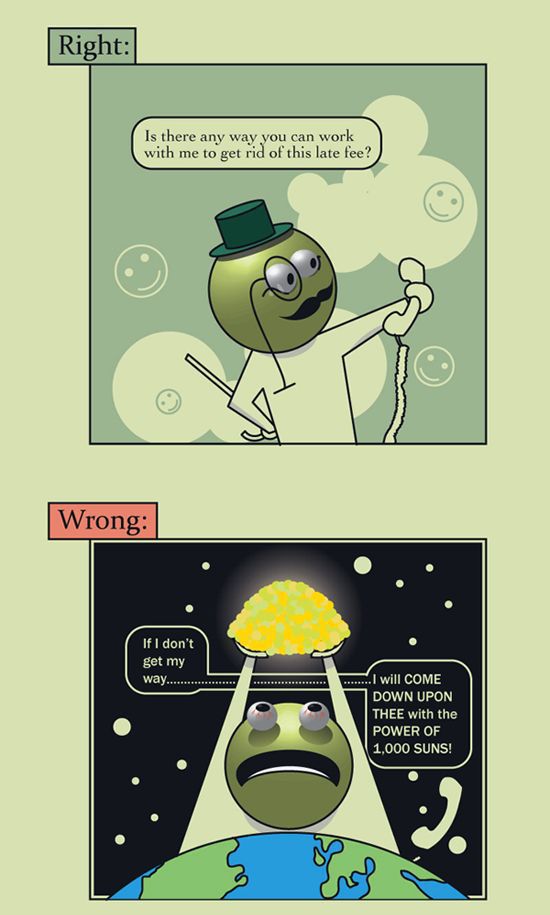 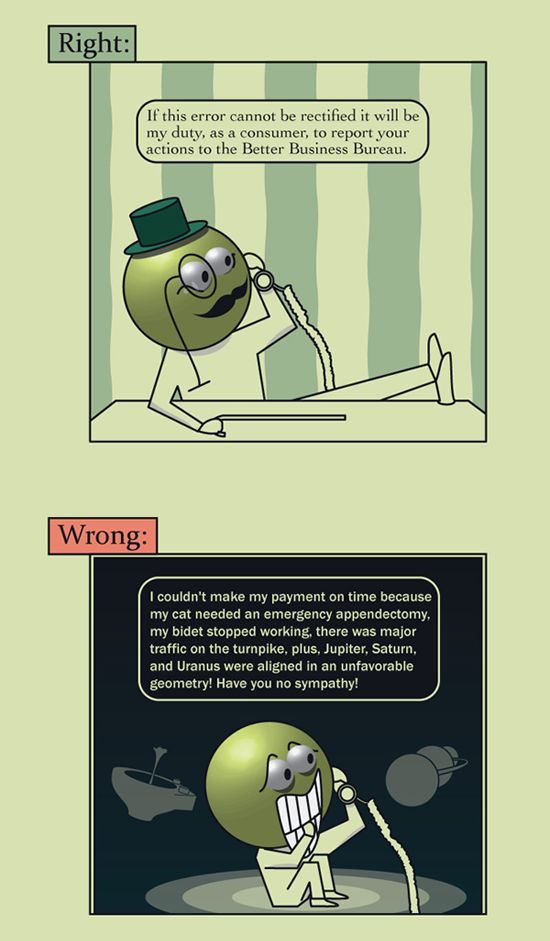 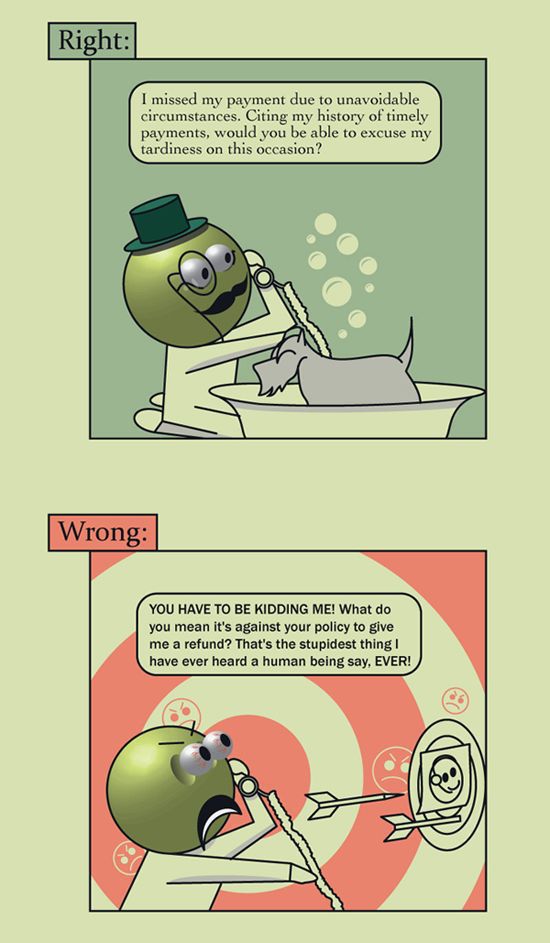 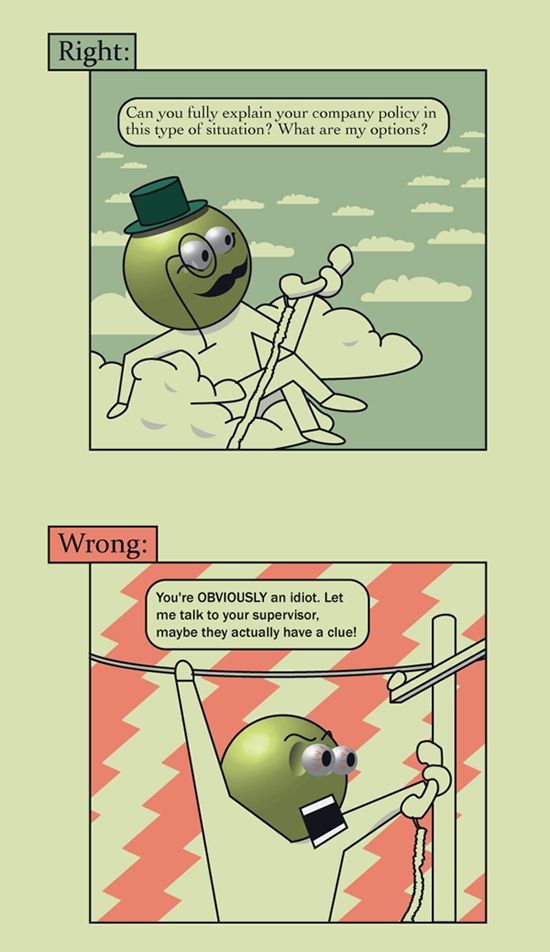 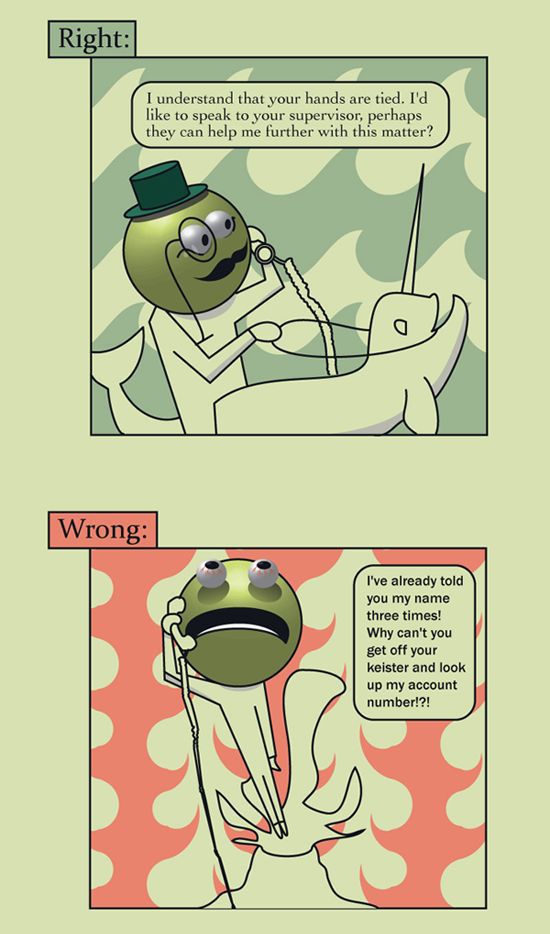 janD 9 year s ago
from my personal experience i can say that it makes no difference for your case, how you talk with this guys

sorry for my english
Reply
0

Wizard 9 year s ago
It works to be friendly and if you do have an excellent record of timely payments they will forgive one late payment. They've done it for me. For everything else, nothing will work, maybe being a customer for many yrs and threatening to switch to the competition will get you added extras or a freebie but that's it.
Reply
0

Norm 9 year s ago
Not to mention some of these people take a LOT of abuse on the phone for things they didn't do. Being polite may just make the difference.
Reply
0

Smokey 9 year s ago
I Prefer to be the guy in the 1st pics, you get the same results, and people need a lil shit talked to em if they are gona try to bend you over.
Reply
0

Q 9 year s ago
The only thing that works is treating service agents businesslike but respectful. The guy on the other end has to take crap from stupid customers all day, they are used to it, it's part of the job as people, in the long run, just tend to be lazy and mindnumbingly stupid. Most people yell at them because they feel their companies mistreated them (which usually isn't true). But these people do not actually belong to the company if they're just employed by a call centre agency, and even if they do, none of your dribbling will ever heard by a manager or anyone else who can actually change things. They did not do you the harm the company may have done you, and in a lot of cases they simply can't help you. They don't deserve the crap they get, and although it's a big part of the job to deal with it, the likelihood one will go the extra mile or give you some unofficial information or will continue accepting your moronic calls is if you treat people who are there to HELP YOU WITH YOUR STUPID FORGOTTEN PASSWORD the way you want to be treated.
/rant.

This ridiculous behaviour is also hardly seen with non-European/non-American people. Kinda makes you think about how society is dumbing down, doesn't it.
Reply
0

Peanut 9 year s ago
These people are just doing their jobs. They have to abide by the rules set out by the company. You have to abide by your agreement. You have a due date. That is when your payment needs to be posted, not when you feel like it. Keep in mind, when you are consistently late, it gets reported to the credit bureau. Every month. Most companies will cut you a bit of slack if you have been on time in the past and try and work with you.

Being nasty gets you nowhere. Ignorance and abuse is not cool.
Reply
0

c 9 year s ago
stupid customers??? Customer is king, the customer doesn't need to be educated... unless you want no customers.

human respect yes, but as a rep you are the contact point of sometimes ridiculous policies.

Or get a real job, your call.
Reply
0