Aliens, They Are Everywhere (20 pics)

Even centuries ago, people already "saw" UFOs and started documented it in the paintings, frescoes, illustrations etc. 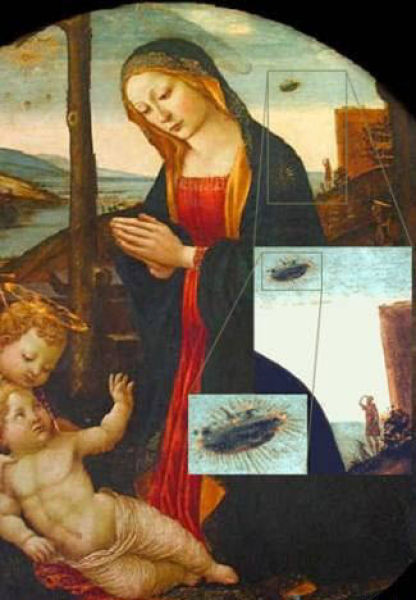 This image is by Flemish artist Aert De Gelder and is entitled "The Baptism of Christ" It was painted in 1710 and hangs in the Fitzwilliam Museum , Cambridge. A disk shaped object is shining beams of light down on John the Baptist and Jesus. 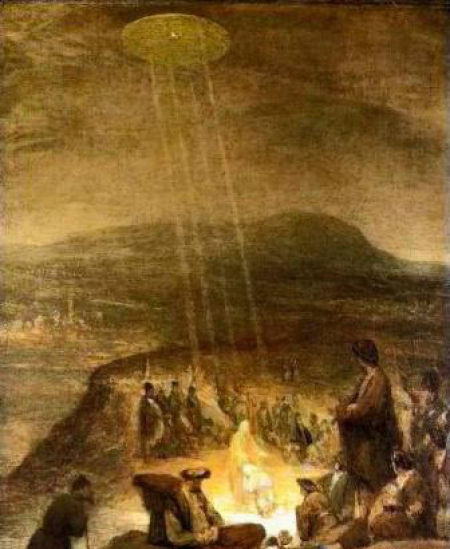 This is a 17th century fresco and is located in the Svetishoveli Cathedral in Mtskheta, Georgia. Notice the two saucer shaped objects either side of Christ.. In the two blow ups, you can see they contain faces. 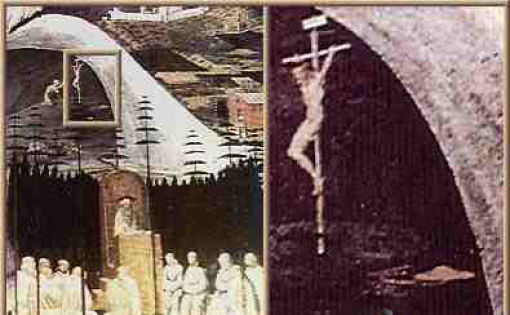 Tapestry, was created in 1330 and is situated at the French basillica Notre-Dame in Beaune, Burgandy. 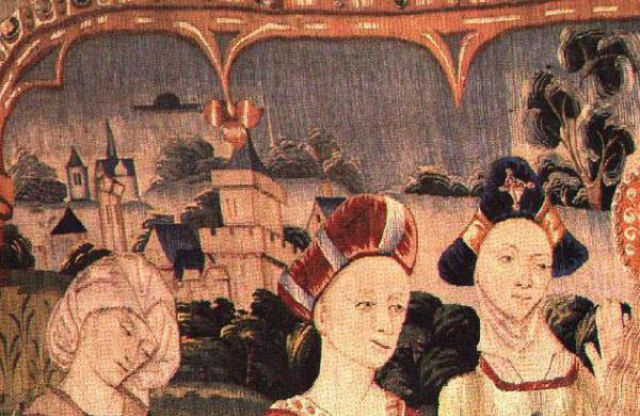 Tapestry. As a previous one depicts the life of Mary and was also created in 14th century.
It it entitled "The Magnificat" and is located at the French basillica Notre-Dame in Beaune, Burgandy as well. 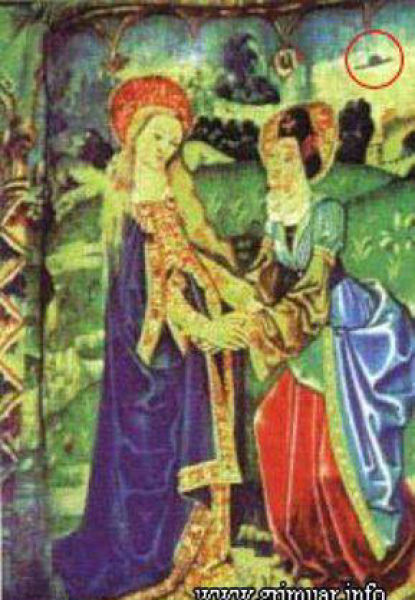 This is a tapestry called Summer’s triumph and was created in Burges in 1538. It now is hanging at the Bayerisches National Museum. 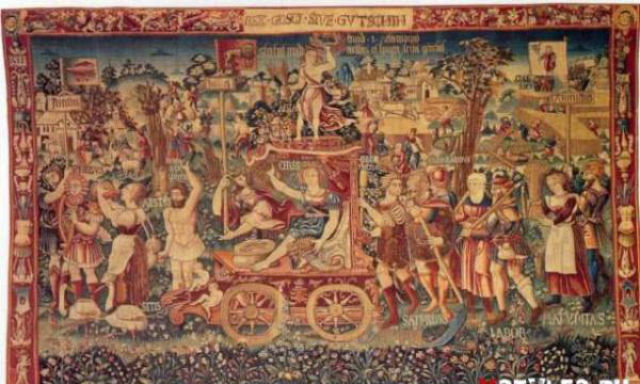 The painting is entitled "The Miracle of the Snow" and was painted by Masolino Da Panicale (1383-1440) and hangs at the church of Santa Maria Maggiore, Florence, Italy. 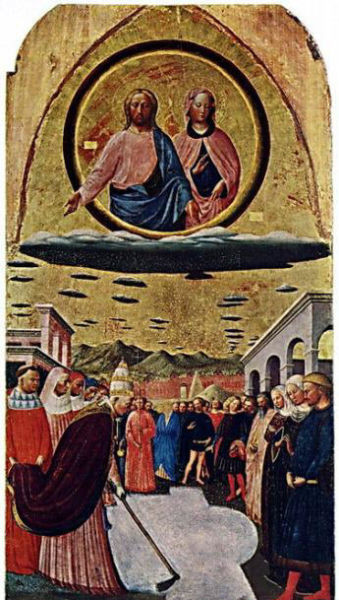 The image on the left comes from the 10th Century Tibetan translation of the Sanskrit text "Prajnaparamita Sutra", held at a Japanese museum. 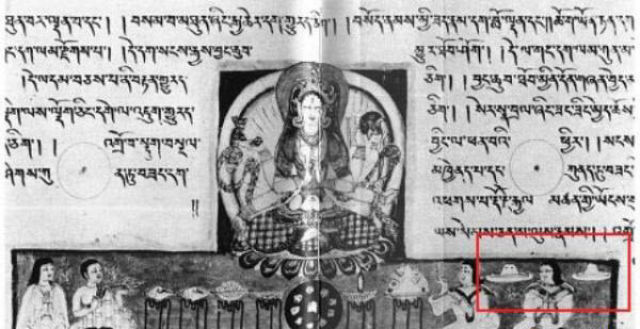 This painting is by Carlo Crivelli (1430-1495) and is called "The Annunciation with Saint Emidius" (1486) and hangs in the National Gallery, London. 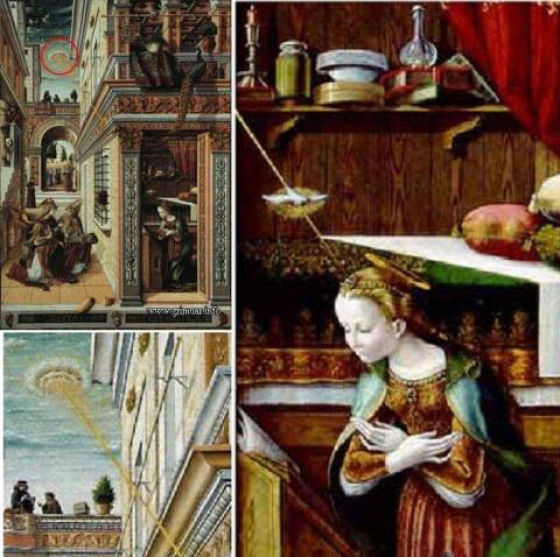 A fresco entitled "The Crucifixion" and was painted in 1350. Two objects with figures inside can be seen in the top left and top right of the fresco. Two enlargements of these objects are shown below the fresco. The fresco is located above the altar at the Visoki Decani Monestary in Kosovo, Yugoslavia. 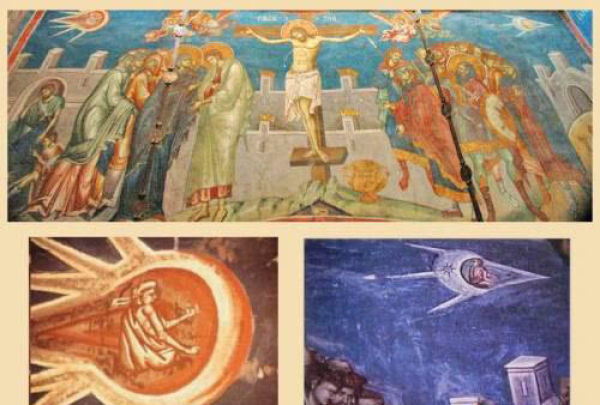 The painting by Bonaventura Salimbeni entitled "Glorification of the Eucharist", painted in 1600. Notice the Sputnik satellite device. It hangs in the church of San Lorenzo in San Pietro. 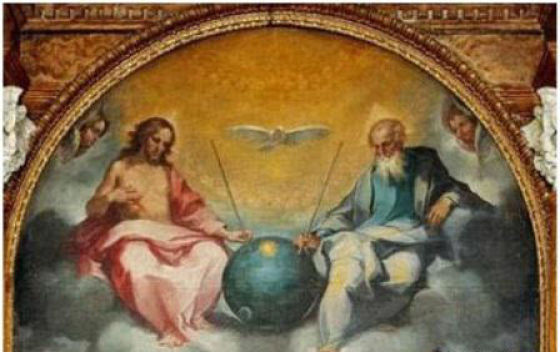 This is a painting on a wood drawer from furniture kept at the Earls D’Oltremond, Belgium.
Date and artist unknown. 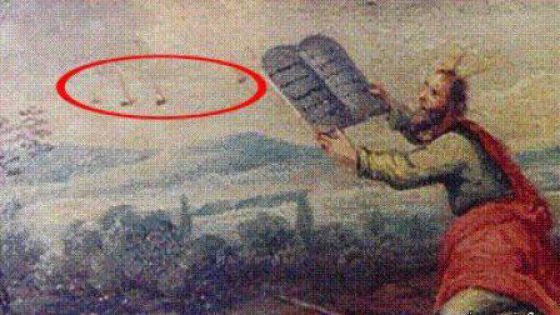 This is a French jeton minted in 1680, a coin-like educational tool that was commonly used to help people count money, or sometimes used as a money substitute for playing games. It appears to commemorate a UFO sighting of a wheel like object. 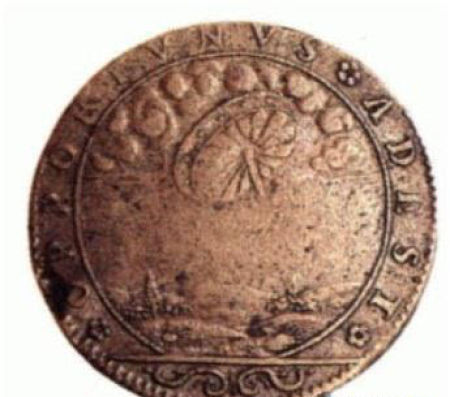 This image is from Kimberley, Australia (approximately 5,000 years ago). It is in Australian Aborigine cave painting. 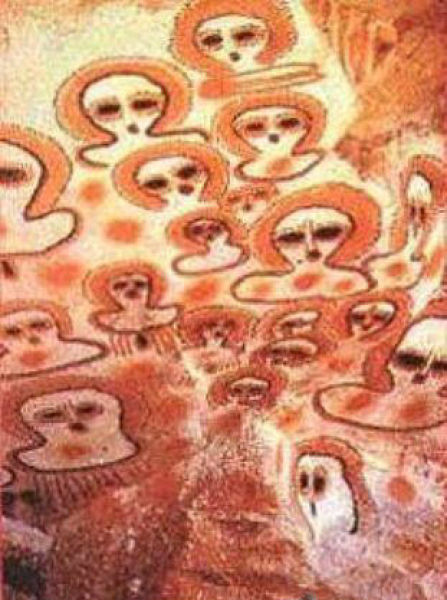 The image is c.6000 BC from Tassili, Sahara Desert, North Africa. Also notice the disk in the sky. 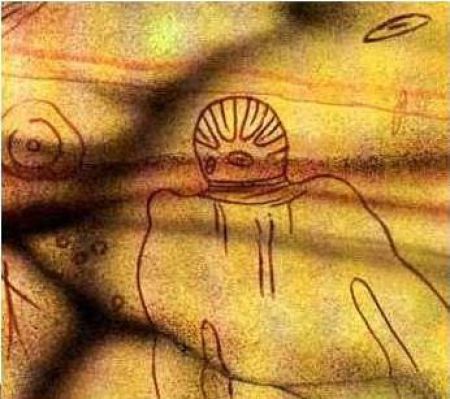 This cave painting is c.10,000 BC and is from Val Camonica, Italy. It appears to depict two beings in protective suits holding strange implements. 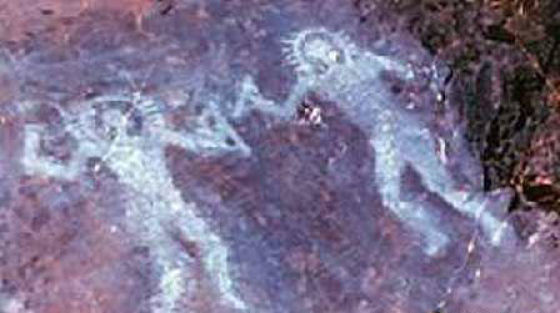 Dogu statuette made during the late Jomon period (14,000 BC to 400 BC) of prehistoric Japan.
The Dogu acted as effigies of people, that manifested some kind of sympathetic magic. For example, it may have been believed that illnesses could be transferred into the Dogu, then destroyed, clearing the illness, or any other misfortune.
Really looks like an alien. 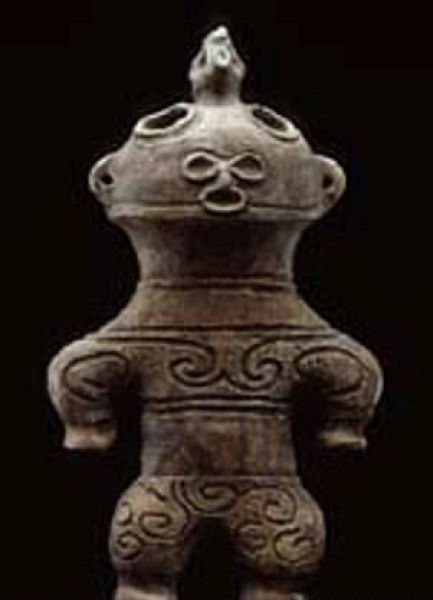 This picture is from a book entitled Prodigiorum Ac Ostentorum Chronicon by Conrad Lycosthenes (1518-1561). Basel: Henricpteri, 1557. It depicts a UFO sighting in Arabia in 1479. The book is held at the Australian Museum Research Library. The photo on the left depict a figure found in Equador. Notice it appear to be wearing a space suit. You can see a comparison photo with an Apollo astronaut. 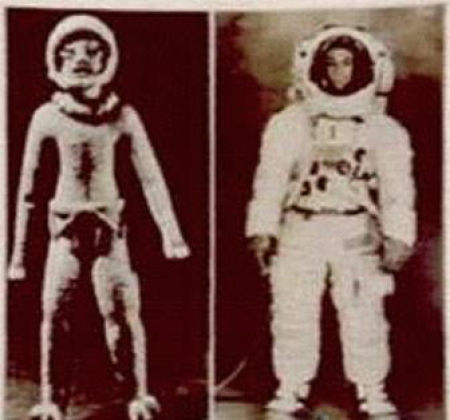 not only that, NASA even is capable of time travel (see 20)
Reply
0

Brumle 10 year s ago
"Notice it appear to be wearing a space suit. You can see a comparison photo with an Apollo astronaut."

LOL, who the fu*k is writing this shit. LOL
Reply
0

migii 10 year s ago
this is also UFO pcs in japan.
http://www.ten-f.com/bakin-to-ufo.htm
Reply
0

AKULA 10 year s ago
I do not think that this is funny!! It very bad joke!!!!!! because you heart thilings of many people.
Reply
0

Ludak 9 year s ago
Who said it's funny?
Reply
0

:-) 9 year s ago
10 trillion billion stars = life
some one had to say hello to us:)
come on people!! open your minds to inner trues, your own energy will tell you everything you need to know!!
After all! all the info is in our Genetics ;)