Everyone or almost everyone has heard of the mythical blood draining horror the Chupacabra. If you haven’t it’s a creature known to sneak into a area in the middle of the night and suck the blood from animals. When I say suck the blood, I mean totally, leaving its victims bloodless. 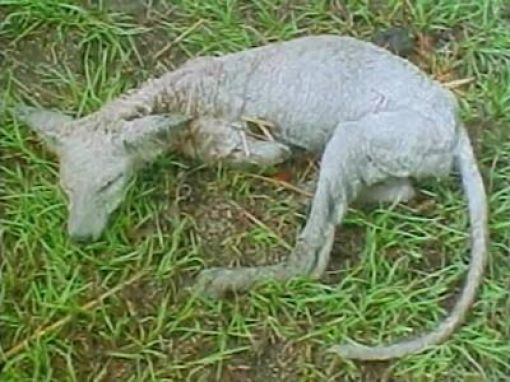 The true existence of this creature also known as the goatsucker was noticed in livestock attacks in Puerto Rico where the bodies of dead farm animals with puncture wounds lay dead. These poor creatures were sucked dry of all their blood. Similar reports began to show animals in other Latin countries and even the U.S. were being sucked dry. The next reports were of seeing these hair raising creatures. They have been described as dog-like, rodent-like, and even reptile-like. These creatures supposedly had long snouts, large fangs, leathery or scaly green gray skin and a horrible odor. It didn’t take locals long to add the two together and come up with the goat sucking creature known as the Chupacabra.

Scientists began to collect the dead carcasses and investigate them. They soon realized that these hideous creatures were in reality coyotes with extreme cases of mange. Mange is a skin condition caused by mites burrowing their way underneath the skin.

But the real fiend is not the hairless, fanged animal purported to attack and drink the blood of livestock; it's a tiny, eight-legged creature that turns a healthy, wild animal into a chupacabras, says University of Michigan biologist Barry O’Connor. After these poor animals have their skin burrowed into the skin becomes inflamed, the skin thickens which cuts off the blood supply to the hair. The hair falls out and in some cases a 2nd infection evolves which gives the animals a foul odor. Add it all together and you have chupacabras.

Although the mites do not cause animal behavior/s to change, these poor inflicted animals are so weak that they choose to attack weaker easier animals.

Learn Something: What does Chupacabra mean?

This word comes from two smaller Spanish words fused together: chupar "to suck" and cabra "goat"

Sven 10 year s ago
Somebody missed the day in English class when plural words and verb conjugation were reviewed. You have the linguistic prowess of a bag of grass trimmings.
Reply
0

Jooser 10 year s ago
I don't know what kind of English you're speaking #1 & #2, but this is pretty good English, albeit missing a few commas here and there...
Reply
0

Peanut 10 year s ago
The poor coyotes. They must be in misery.
Reply
0

IzismileNeedsAnEditor 10 year s ago
For the love of god, please stop calling it a "Factoid".

What is a humanoid? So what is a factoid?
Reply
0

craig 10 year s ago
That is a kangaroo.

And Chupacabra was made up to scare the many rural peoples in Mexico, to distract them, and keep them from voting in the corrupt elections.
Reply
X
>
1/1
<