This cartoon deals with the subject of climate change philosophically. Regardless if you believe in or not it is a subject of great controversy. Take a look at how this cartoonist provides a rather unique view of the subject. 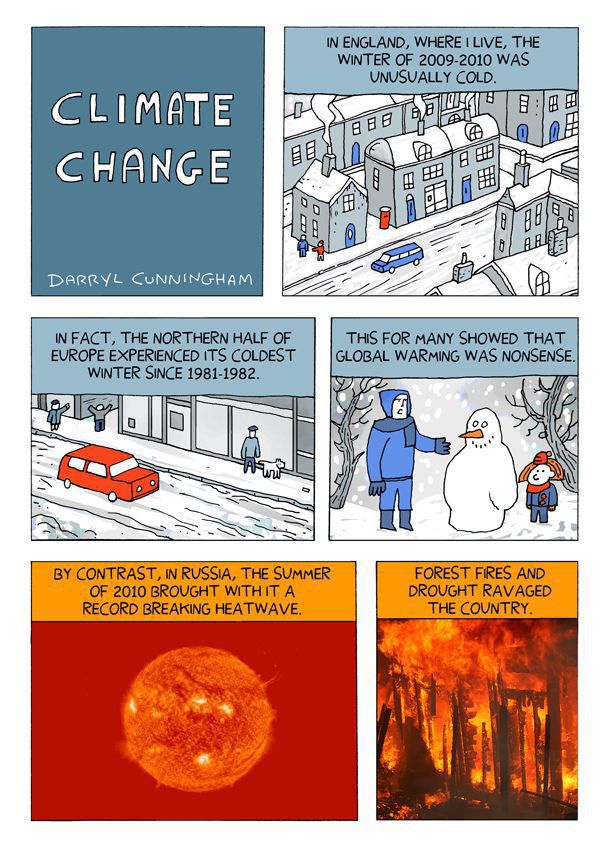 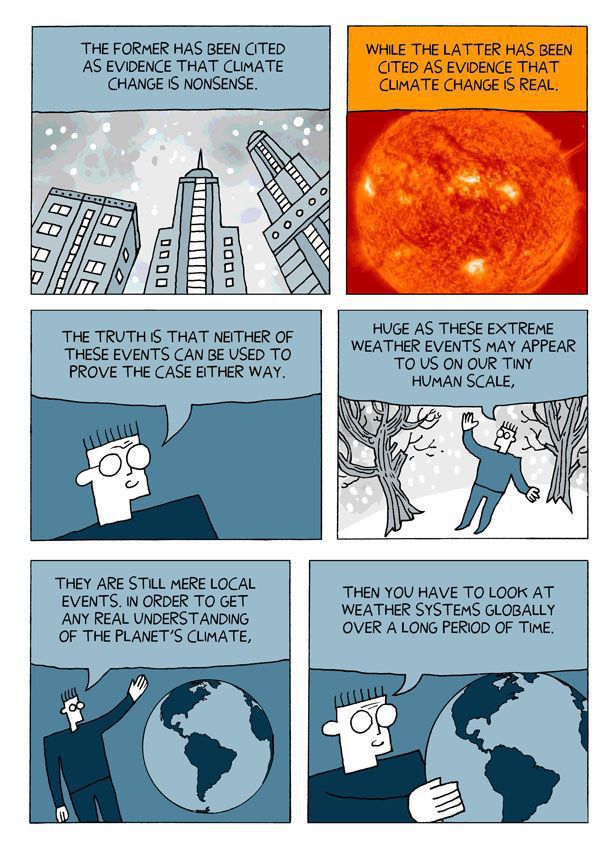 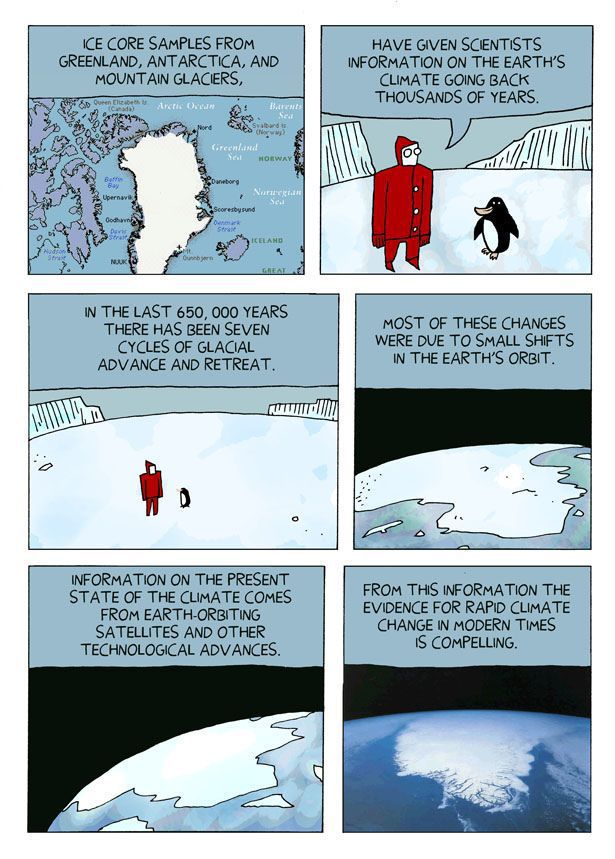 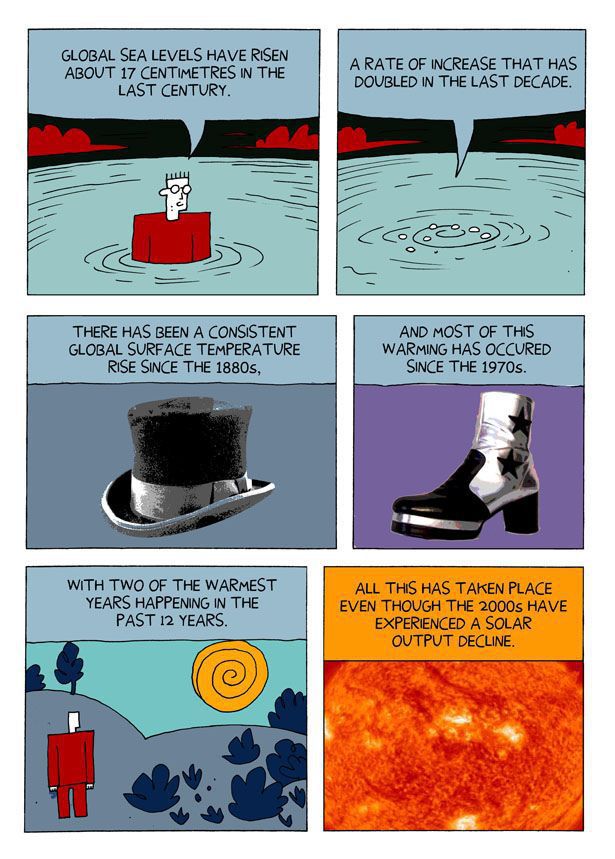 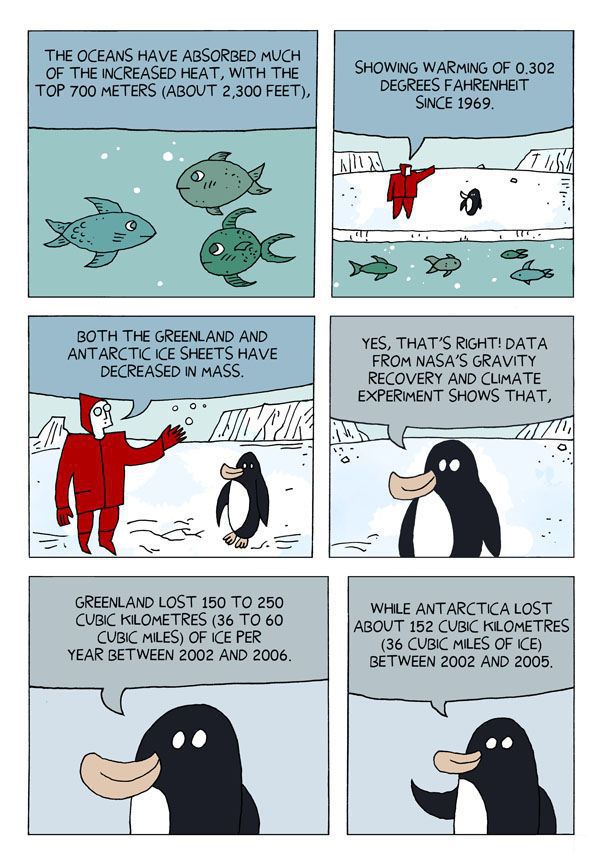 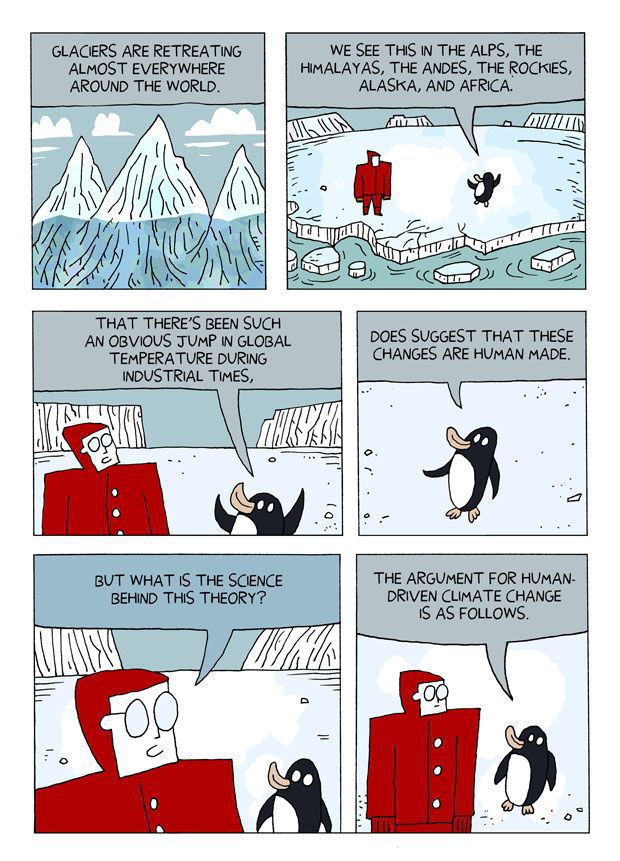 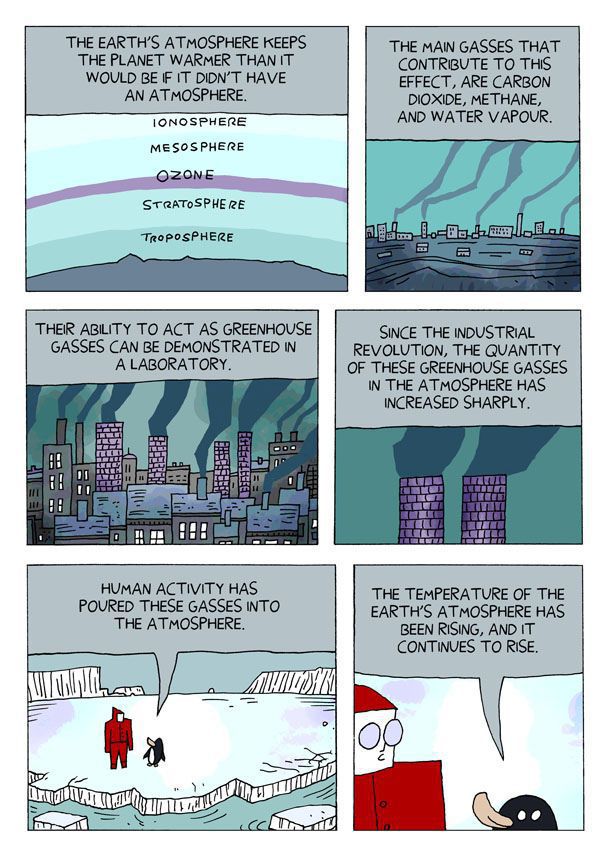 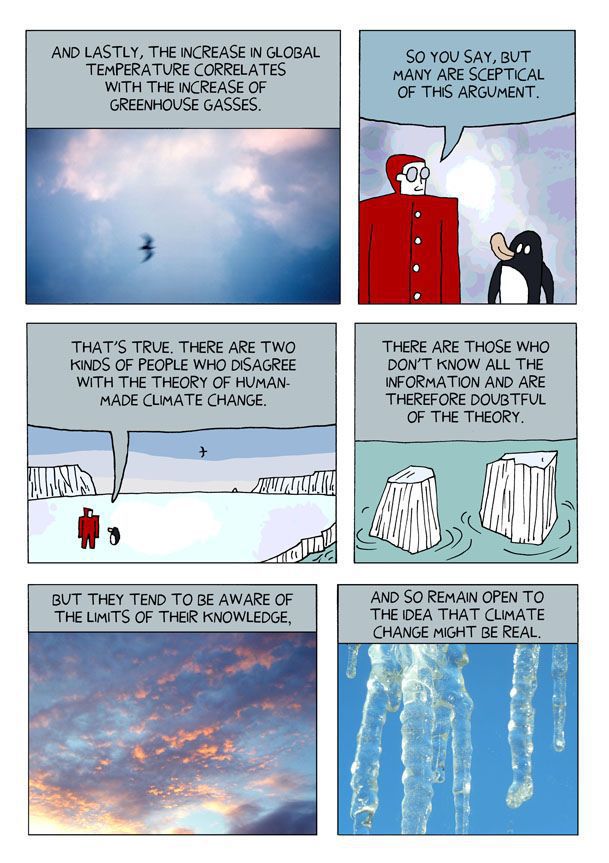 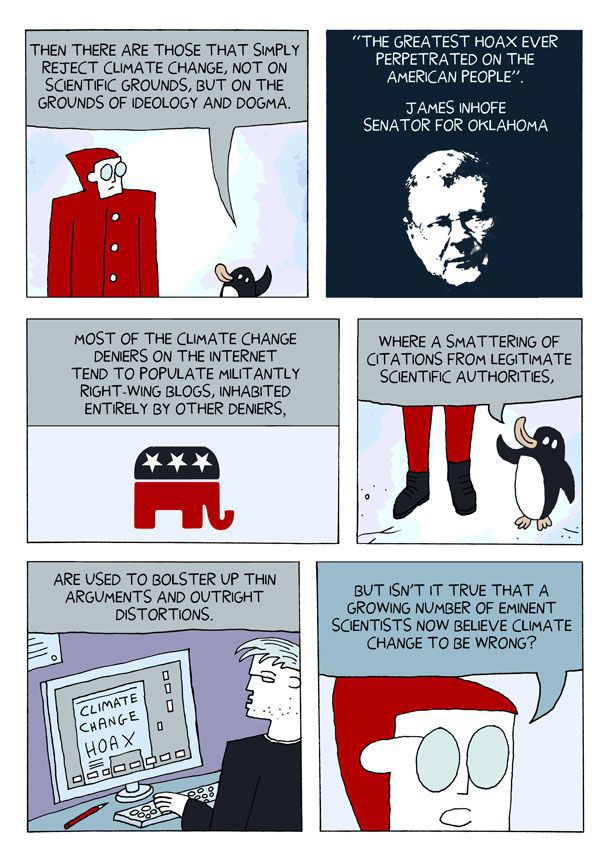 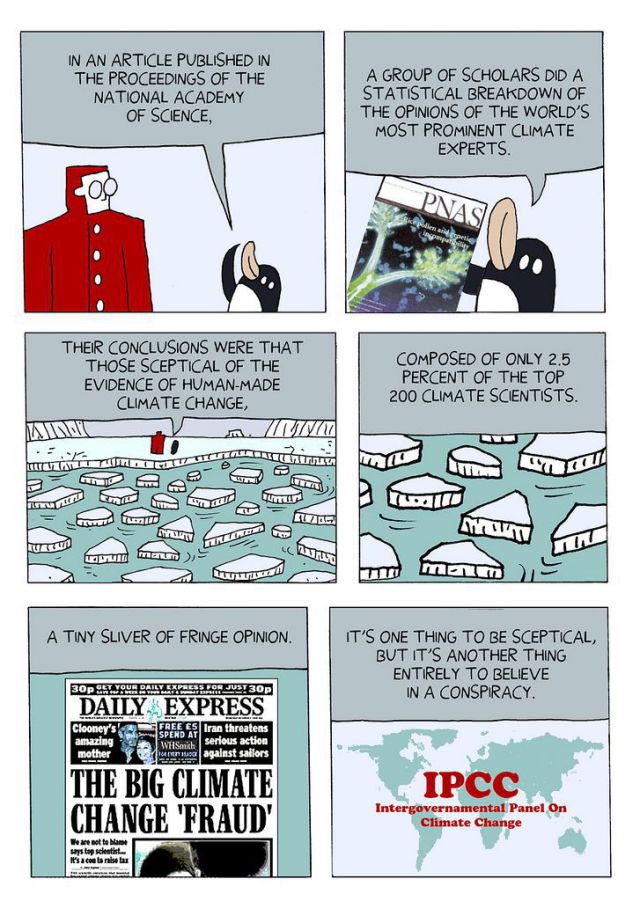 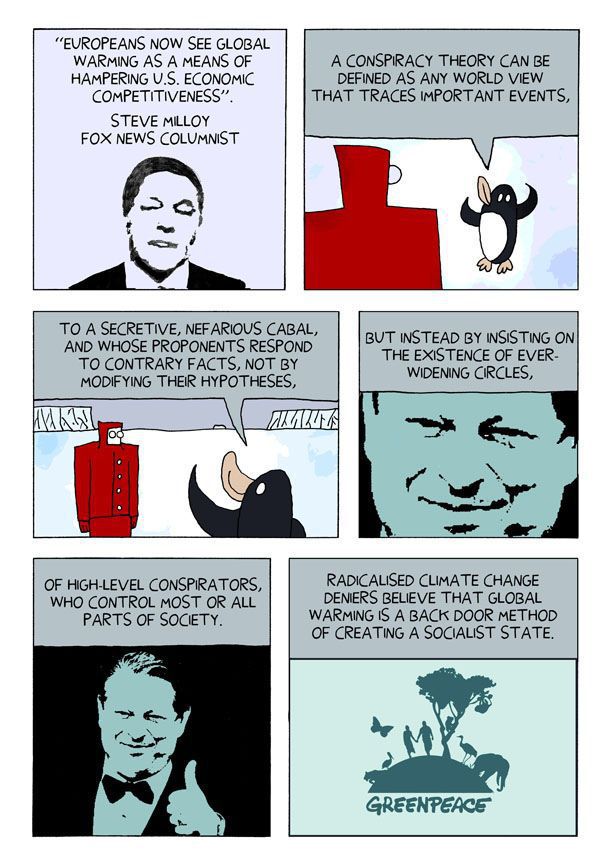 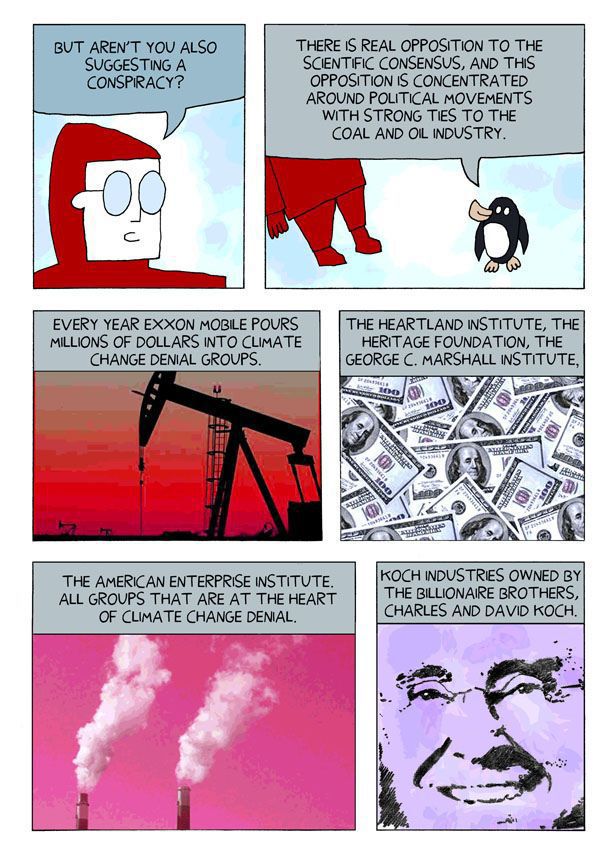 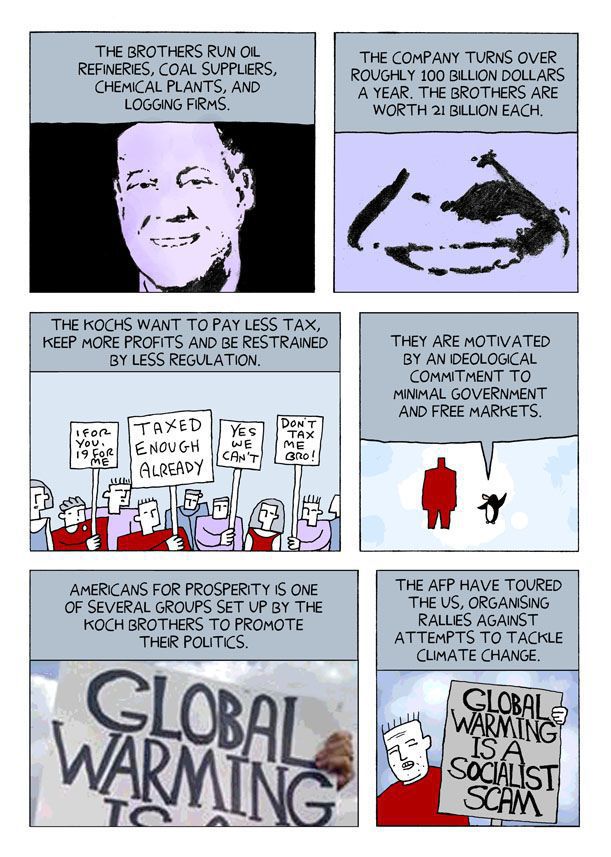 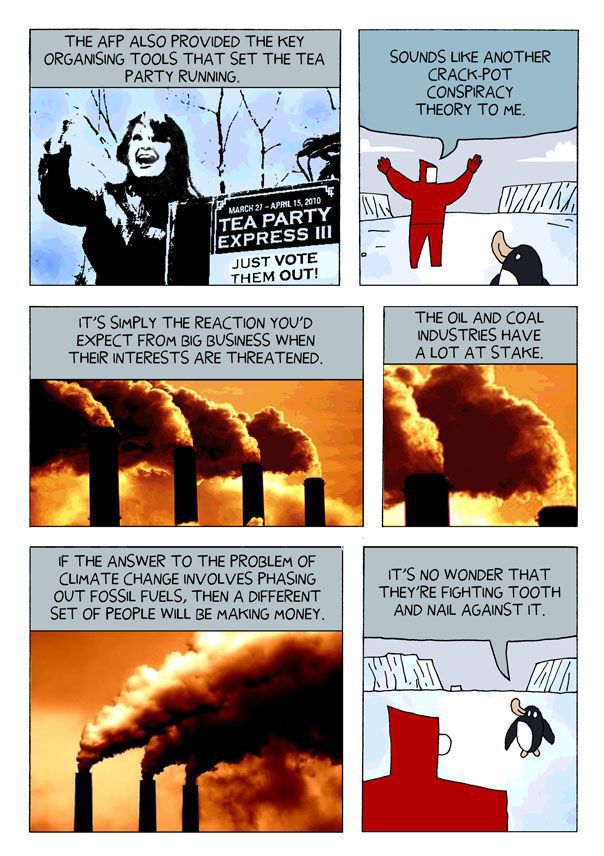 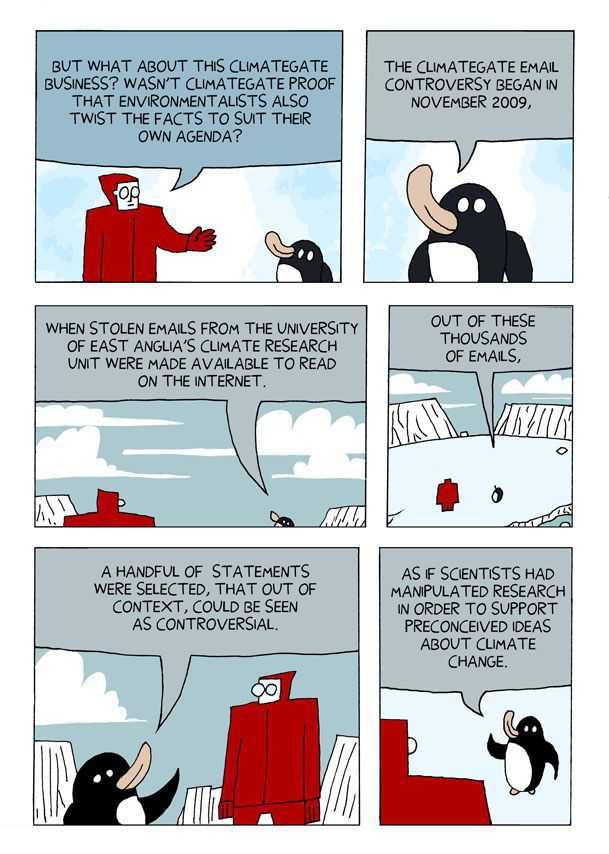 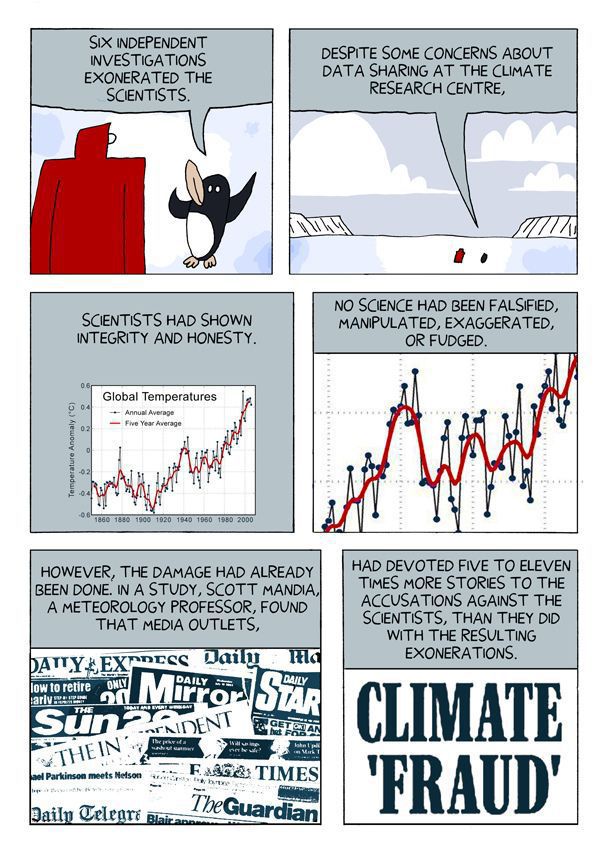 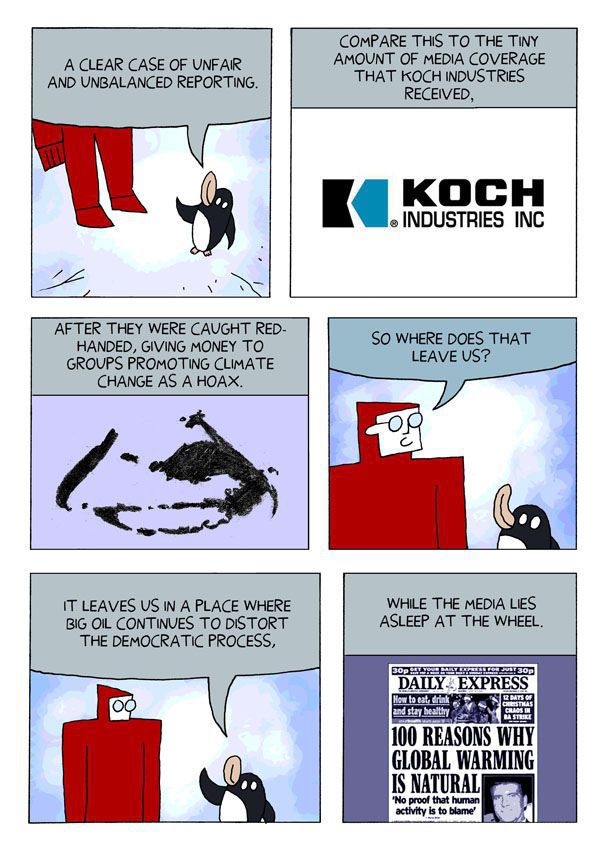 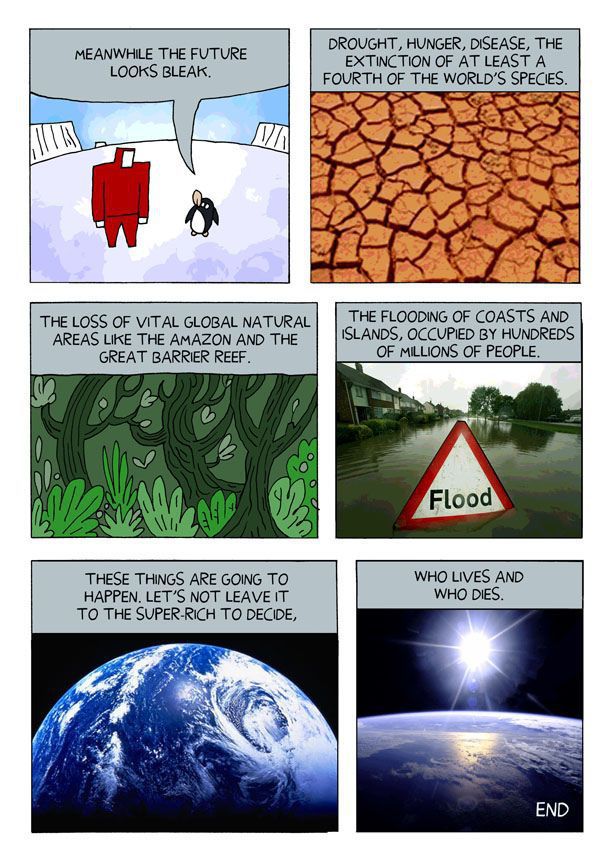 V. Flint 10 year s ago
I was waiting for some sort of edutainment aspect to arise, even after five solid minutes of reading high school science textbook worded into comic form. Highly disappointing; this is the same global warming rhetoric that we have known for a couple of decades already in unentertaining comic strip format.
Reply
0

a 10 year s ago
Too frigging long
Reply
0

BoRg 10 year s ago
So what the author of this has to offer? Let us stop maining and oil extraction?
Stop factories that provide food and etc? Yes the world is going new places since the industrializacion stared. So what? We just need to find ways ot work on this problem not stop manifacturing and etc.
Reply
0

bertha_2_2 10 year s ago
i is very focused on large corporation's. Global warming is everyone's responsibility. EVEN IF you don't believe in it, what exactly is the harm of taking on greener and more cost efficient ways of living? (ie: Solar panels) --- meanwhile everyone should Google: Plastic soups. It's where all rubbish is ending up in the sea. Gross as!
Reply
0

M 10 year s ago
technological progress sacrificed in an X% the environment. there is nothing wrong with that or would mankind rather wash their clothes/animal fur/animal skins in the river and live in caves and mud houses ? In my opinion, this is the compromise humans had to make in order to evolve, so far. You can't run before you learn to walk first...
Reply
0

NotGoodStuff 10 year s ago
4TLDNR: unless you formed your own opinion based on primary evidence (not some website), you don't have a horse in this race and should keep the uninformed spew to your side of the screen.


The comic'd information points toward the necessity to reduce GHG emissions to continue our current quality of life while avoiding significant environmental consequences in the form of: temperature, acidity, and increasing level of oceanic waters, amplified weather extremes, and continued land-surface temperature increase through radiative forcing. These are influences of increasing atmospheric GHG, quantified and confirmed in coupled thermo-chemical-physical experimental evidence and predictive models. It is fact back by an enormous volume of evidence.

To accomplish a GHG reduction, a shift in infrastructure from carbon-intense processes to low-carbon options are the way forward, without compromising current living standards or impeding the developing world. This is achievable if driven by the populous (i.e. you and me), and not commercial interest (i.e. Koch industries and the RNC) who have disparate long-term interests (although, neither perspective is "wrong"). This is also fact.

In other words - there is very little merit in those who take a polar opposition while referring to this as "bull [that can be countered by] info for other side of debate" due to a very low level comprehension of interrelated economic, national/international, and scientific components of the environmental change issue. Rather, these individuals depend on dismissive statements and reference to their own "expertise" on the issue (which typically means they read some websites and parrot some mutant-hybrid of concepts contained therein).

For the good of everyone; if you have an opinion, but are unsure of the quality of evidence supporting it, keep an open mind, otherwise you are no better than anti-emancipation evangelists who preached intolerance without evidence or consideration of reality.
Reply
0

yeah bite my shiny asian ass, those oil companies are souless machines, they don't give a C about the fauna o flora
Reply
0

Alkhoren 10 year s ago
I'm higly disapointed about this post as a whole, the position should have been stated earlier. Their is one, at least, one BIG mistake. #8 #9 says there is two kind of people that refuses climate change : False. to sum up : the kind that are convinced because they're just dumb enough (doesn't know all the data), and zealots, conspirationnist (make their idea on the ground of ideaologie).

In fact what it says, is that both are wrong, and they're right. Noooooo really ? I thought they were actually stating facts to come up with interesting doubt about everything, which is what science usually do. Scepticism is the friend of the scientist, while the author is clearly zealot like, saying the others are wrong, come on, what's the point of this ? this is just childish argument : Your wrong : no i'm right and so on ...
Now, the comic in itself is ugly, and just serves to make it easier to read. just like al gore's an inconvenient truth in the part with the simson look-alike character.
Theire is another HUGE mistake: #12 they can't be opposition to a scientific consensus because such things doesn't exist. particularily in this matter, where more than 31,000 phd's owner scientist signed a petition saying that the GHG will cause huge problems in the futur http://www.oism.org/pproject/

You know what :You can't say: yes, human are mostly the cause of global warming, because theyre isn't enough evidence, you can't say there isn't a global warming because instruments show that there is, and machines can't lie by themselves. the importance of GHG over the climate haven't been clearly stated, that's a fact.

Sorry for this long ass comment that probably no one will read, but i think it's very important to stop polluting the earth with plastics, oil and nuclear products, and the protection of the life of the fauna and the flora is much more important that the GHG. Now the sun seems to be begining a slow intensity period so the global warming will most likely help at this time so perhaps we should produce even more GHG ?
I won't tell my sources which are too damn long for this comment that is supposed to be readable but trust me or not, i don't care mypoint is revelled
Reply
0

fido 10 year s ago
I read the whole thing and it's basically pro-global warming, pro-establishment garbage. The author tries to act unbiased by acting neutral, but in the end, it's more global warming fantasy crap.
Reply
0

Stupidme 9 year s ago
Number 4, Last panel... Its wrong... There is actually a current increase in the solar activity
Reply
0

black_tiger 9 year s ago
so wats new? that wat rich did an will do.
rich sold your life, your health, your freedom, your planet for an extra cash!
Reply
X
>
1/1
<