We thought with Valentine’s day just around the corner we would keep your mind off of hearts, candy, and fluffy little poems of love. Instead we will fill your mind with what happens to those that don’t behave the way society thinks that they should. These are some of the most heinous torture devices and methods used to gain information, or destroy a victim. 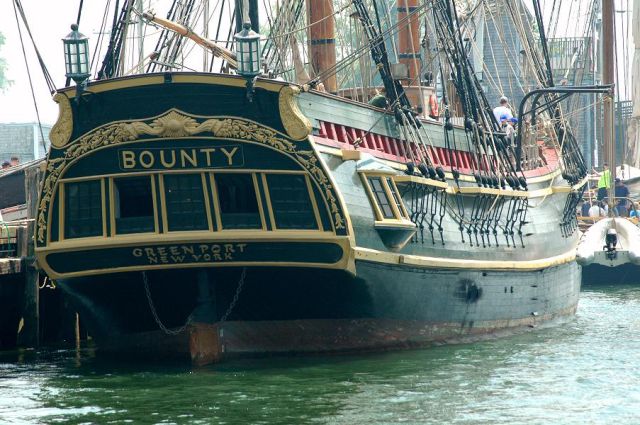 We can’t leave pirates out of the top ten. These wicked sea man tied their intended victim to a rope and then threw him out in the waters. As the boat slices through the water the victim is dragged along behind and usually hits and bangs against the boat losing skin and eventually drowning. 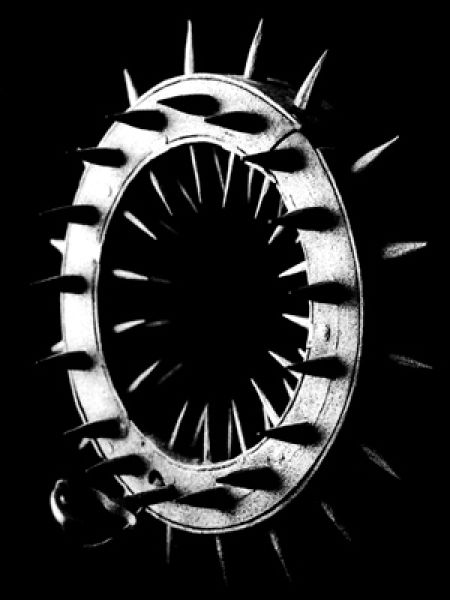 This little dandy goes around the neck and weighs 11-20 pounds. All that is needed is to hang this around the neck of the intended and wait for the victim to become infected, insane, or just die off. The lazy torturer’s favorite toy, no extra work needed. 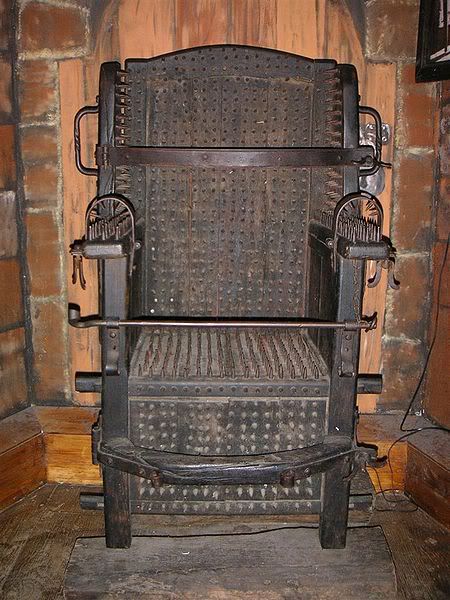 There are a wide variety of these types of chairs, but they all have a fw things in common. They all have spikes that cover the back, arm rests, seat, leg rests, and foot rests. The normal number of spikes on a chair such as this is close to 1,500.

The victim was strapped in and tied while two bars pushed the arms against the arm rests pushing the spikes into the flesh even further. There were also holes in the chairs bottom so that a fire of sorts could be built and the victim’s bottom was burned. 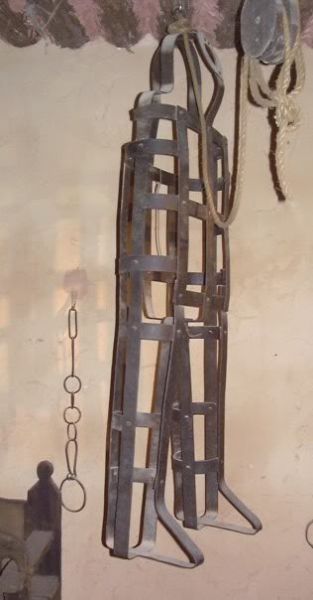 Although it really doesn’t resemble a coffin this painful torture device was wrapped around a person and then bolted shut. It was extremely useful for overweight victims. Sometimes the coffin was left in a plaza for all to see where animals could eat at the flesh of the victim or others could throw rocks at them for whatever crime it was that they might have done. 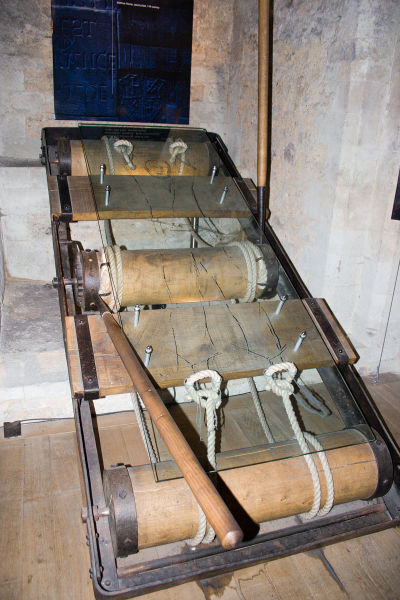 Often spoken of in books and movies this is a popular torture device that leaves the victim totally destroyed. The victim was placed on the slightly elevated rack with a roller at one or both ends and the legs were fastoned to a fixed bar.  The ankles were fastened to one roller and the wrists to another.

The handle and ratchet are gradually turned stepwise to increase tension to the chains creating an excruciating pain. Eventually the victims joins were dislocated and separated. 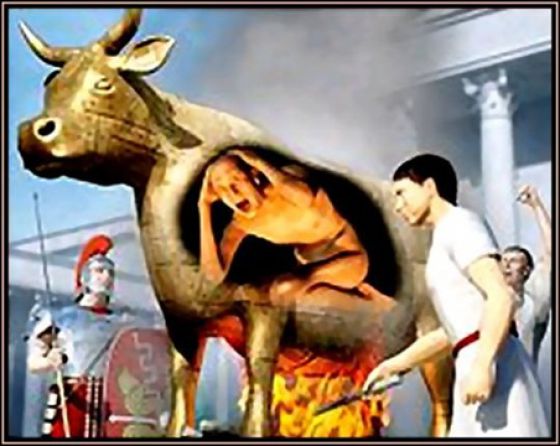 In Athens, Perillos created a device that was made of brass in the shape of a bull. It had a door in the side where the criminal was placed and then closed in. They then built a fire underneath that roasted to death. The weirdest part was once the occupant began to scream in pain tubes manipulated the screaming into sounds of a raging bull. 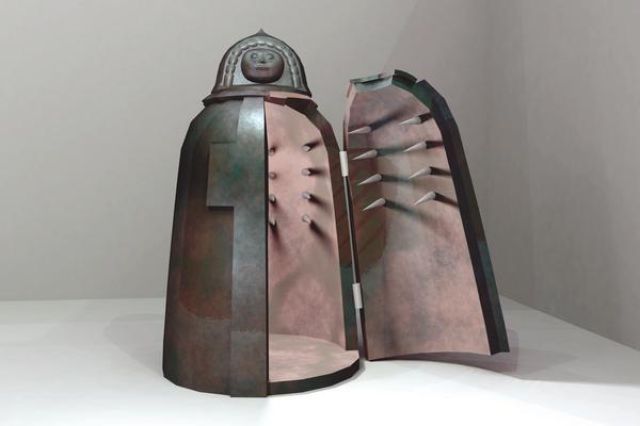 Although the name doesn’t seem to hostile, the actual device is severe. In German it is known as the Eiserne Jungfrau and is a cabinent created of iron with a hinged front. It can encompass a human being. It has closeable opening in the front so that the torturer can interrogate the victim and either kill or torture them by piercing the body with sharp objects such as knives, spikes, or nails.

It is also known as the Judas Chair. It is a torture device that is a pyramid shaped seat. The victim is placed on top of it and the point is inserted into the anus, vagina, or scrotum. Then the victim is slowly lowered upon the pyramid impaling them slowly. 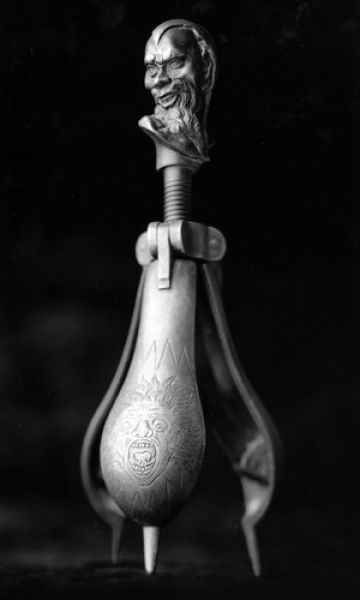 At first look this little item doesn’t seem to bad does it, but when you find out how it was used the hair on the back of your neck will stand up and your heart might fill with terror.

This item was inserted into the victims mouth, rectum, or vagina. Then slowly the head was turned and the leaves at the bottom spread out those tiny half inch spikes digging into the soft flesh tearing up throats, ripping guts, and spreading genitals wide.  The face is made to look like Satan silently laughing or screaming. 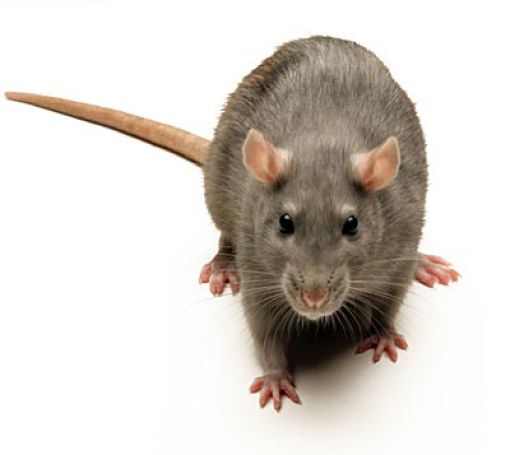 This also called the Rats Dungeon or Dungeon of the Rats and was one of the featured tortures in the Tower of London. This torture is also supposedly a traditional form of Chinese punishment.

In most cases the rats are angered enough that they attack the victim. One such way is to fill a bowl with rats and place it open side down on the naked body of the intended. Then a hot coal was placed on the bowl, the rats then attempt to escape by gnawing into the victim.

xenomorph 10 year s ago
fabulous. kind of makes you wonder who the bad guys really are since these were all invented and used by the religious types. have you ever met an atheist who said 'don't believe like me or I'll hurt you!'?
Reply
0

sono 10 year s ago
the things people do to eachother.there's no other species on this planet that acts like us.we kill for pleasure.for sport and justify it with all kind of shit
Reply
0

LS 10 year s ago
Ironically, human being invented these things exclusively for their own species; they would never used them on the animals.
Reply
0

xoxoxoBruce 10 year s ago
No, in keel hauling they tied two ropes, and dragged him under the boat (the keel) from one side to the other. The barnacles on the hull would flay him.
Reply
0