Uncanny Factoid: Recycling one Pawstep at a time! (3 pics)

A four-year-old rottweiler, named Isabella, thinks littering isn't really... well, cool. To prove her point, she apparently picks up plastic soda bottles on her walks with her owner, Jan Larion, around Livonia. 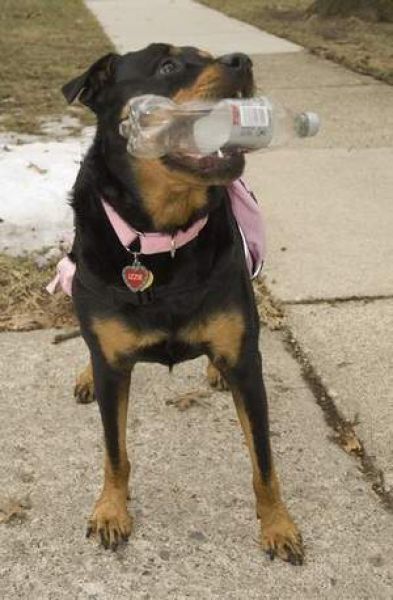 Her owner claims that she's a dog with a job, who likes to have purpose.

For about three years, Isabella has been picking up bottles on her walks with her owner. Now, at age four, she can hold three bottles in her jaws. Isabella's owner bought her a little backpack so she can carry them all. For one walk, her record was seven!

When she was a little puppy, the canine started getting interested in plastic bottles because Jan Larion's husband Timothy, put treats in the water bottles at home. 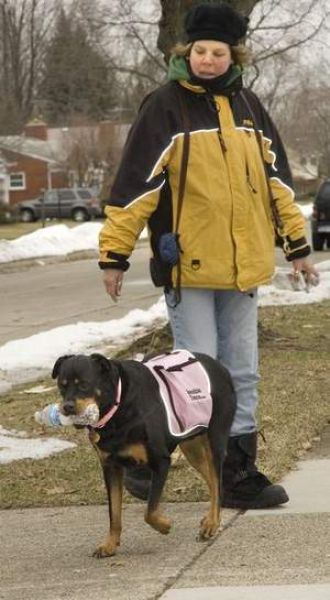 After the whole treat-experience, she started to pick the bottles up on walks while getting praised by her owner.

This canine even has a savings account now, which is getting $1 deposited into it, for each soda bottle she finds and picks up. At this point of time, she has maybe around $40 bucks now. Jan Larion claims that she'll donate that money to charity, which will most likely be to the Humane Society.

Isabella's owner wants her to be certified as a therapy dog for hospital visitors, so people can understand what a great breed the rottweiler is. "She's so sweet and gentle with kids," Jan Larion said. To make people less afraid of this canine, she bought her a pair of pink sunglasses!

This female pooch loves all of the attention that she gets from the passers-by on the street, and is also eager to show them what she's collected.

Isabella is "incredibly smart," her owner claims. If you say, 'Find the bottle,' she'll look all over. 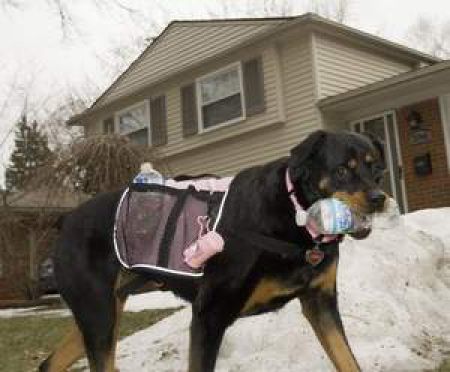 Usually, this doggie finds bottles on her own when they are walking, but sometimes her owner has to point a few bottles on the way if Isabella doesn't notice them. After doing so, Jan Larion places these bottles into the recycling bin.

Isabella apparently knows what bottles she can and can't pick up at home. The little pooch doesn't like paper on the floor either, apparently, because she picks that up, too.

Although, recyclable bottles are what she prefers to pick up most. Isabella is keeping Livonia a clean places one pawstep at a time.

Learn Something Fun: The longest lived dog, according to the Guinness Book of World Records, was an Australian Cattle Dog, named Bluey, who lived to be 29.

GOODSTUFF4U 9 year s ago
Isabella's owner wants her to be certified as a therapy dog for hospital visitors, so people can understand what a great breed the rottweiler is. "She's so sweet and gentle with kids," Jan Larion said. To make people less afraid of this canine, she bought her a pair of pink sunglasses!

qwed 9 year s ago
Any dog can become agressive if not trained right. But any dog can be your best friend with proper taining. I know rotties have a bed rep, But I think they're one of the best breeds out there.
Reply
X
>
1/1
<