These are great examples of innovative and creative outdoor advertising campaigns that arrange an unusual performance for their audience. Boring billboards are no longer interesting to the public. 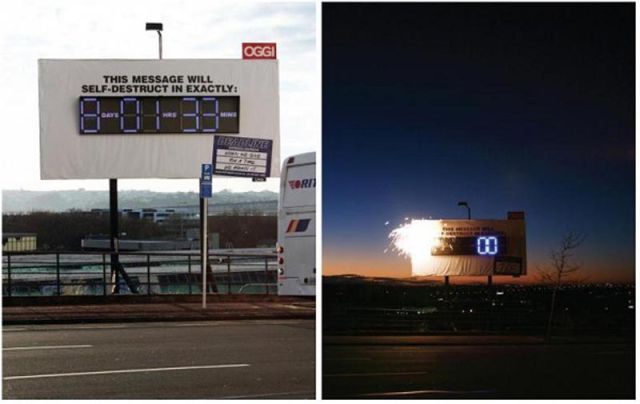 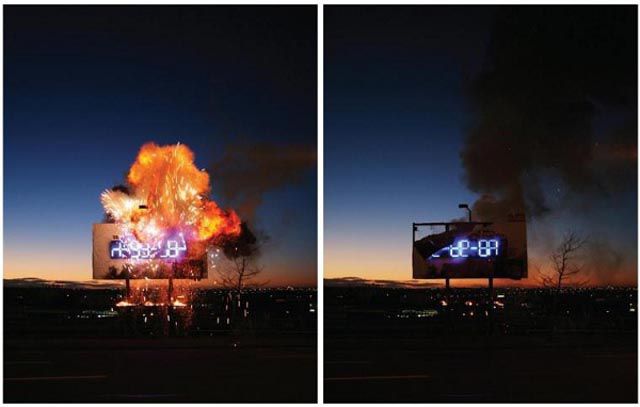 An unusual billboard was erected in New Zealand in summer 2007. It promised to self-destruct after the billboard’s digital clock counted down the last seconds on July 22. People could watch the whole process either on the street near the billboard or on the website. This exploding advertising was used to reinforce the brand promise of Deadline Couriers “When we give you a time we mean it”.

Pascall Candies “When Will the Fruit Burst” 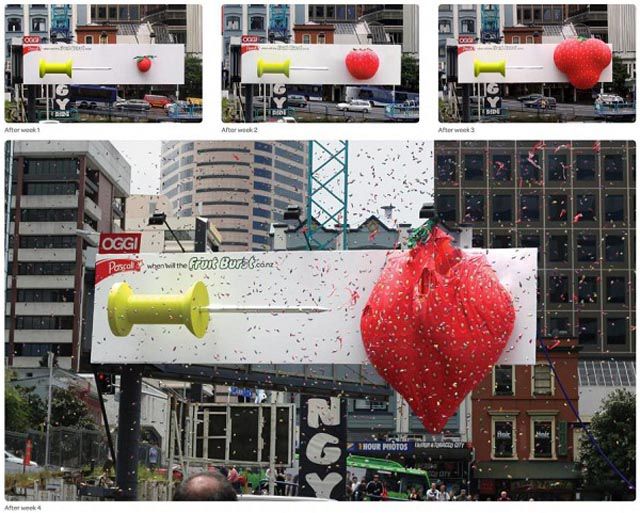 Cadbury Pascall fruit chews built public interest by erecting a billboard with a giant strawberry balloon full of wrapped sweets and a huge pin. The balloon was slowly filled with air moving closer to the pin. The public was invited to win $5,000 by guessing when the balloon would burst. It happened on November 15, 2008. 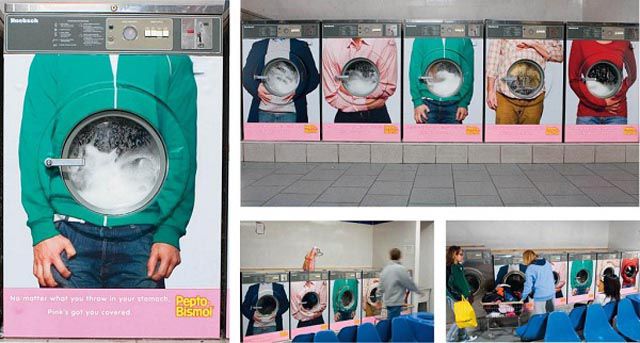 This campaign used washing machines at laundromats to demonstrate the midsection of people who suffer from upset stomach. The washing machine window formed people’s tummy. 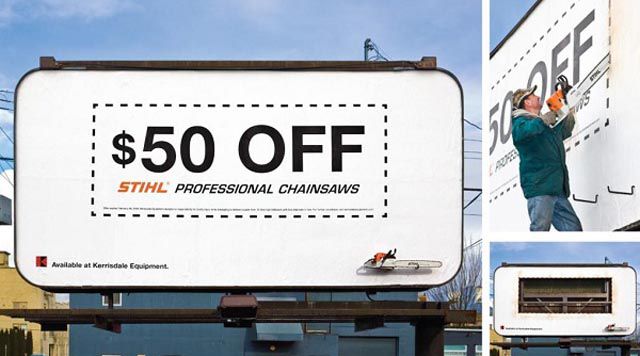 Stihl professional chainsaws were promoted in a very creative way. A coupon and a real chainsaw were put on a billboard. After a couple of weeks, a man showed up. He used the chainsaw to cut out the coupon and left with it. The billboard stayed up with a hole in it. 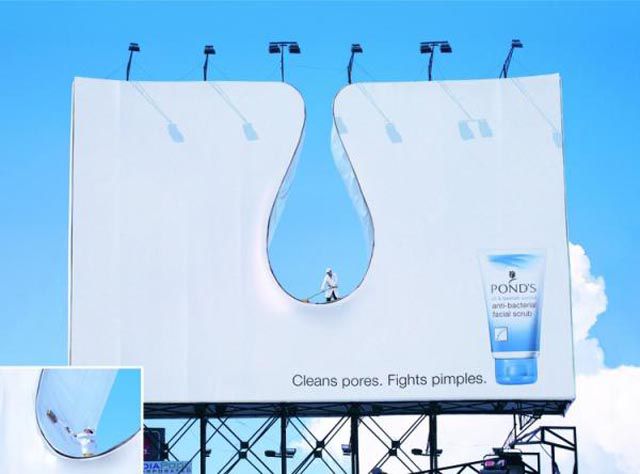 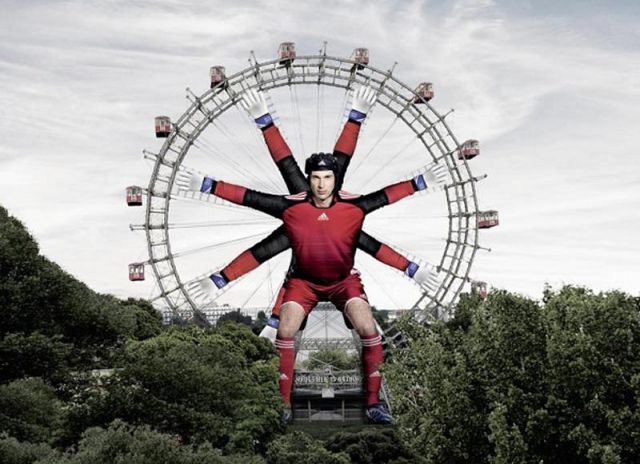 Adidas used creative tactics for UEFA Euro 2008. The company created a likeness of Czech goalkeeper Petr Cech with 8 arms onto the Giant Ferris Wheel in Vienna.

A huge egg disclosed with the first sun rays to announce breakfast at McDonald’s. 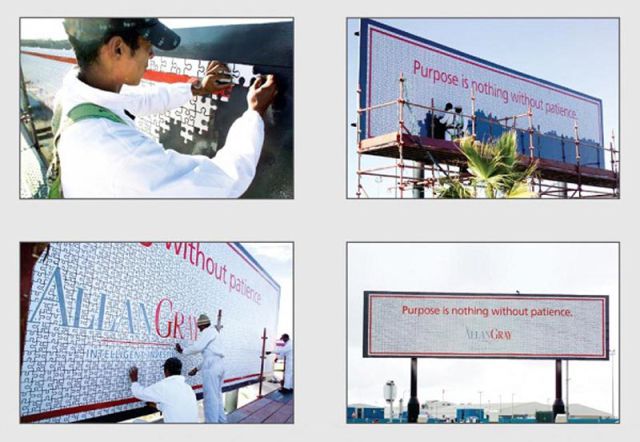 This 6000 puzzle pieces billboard was created by Allan Gray Investments to prove that “Purpose is nothing without patience”. The billboard was placed next to a busy road. Each day a little bit more of its headline was revealed. It took 4 weeks to reveal the sender.

Nedbank “Power to the People” 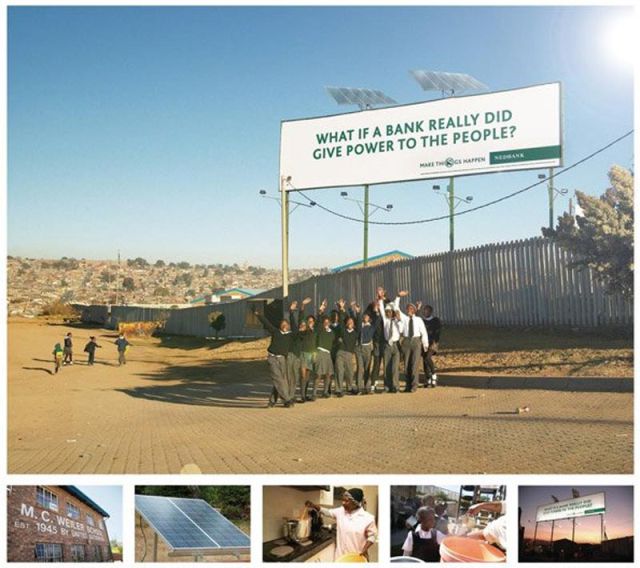 South African bank, Nedbank, created a solar powered billboard which supplied power to the school. The 10 solar panels provided energy for the school’s kitchen and canteen. 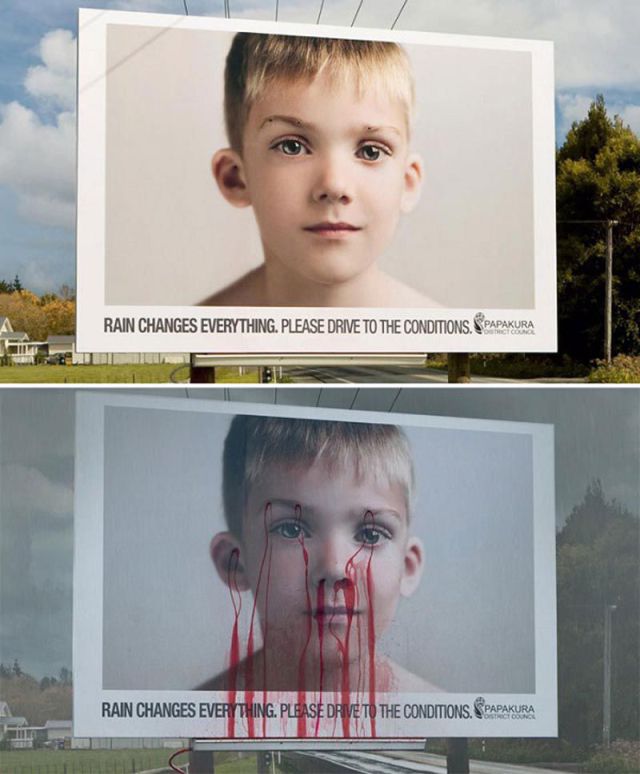 This billboard was erected on New Zealand’s busy road with the highest mortality rate during the rainy season. It featured a young boy who started to bleed when it was raining. The billboard said, “Rain changes everything. Please drive to the Conditions.” 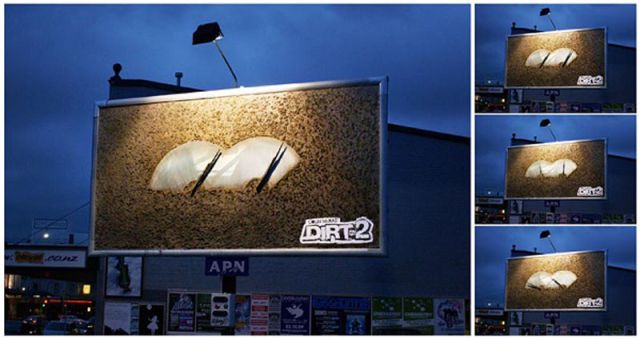 The racing video game, Colin McRae Dirt 2, was promoted on a billboard that featured a mud encrusted windscreen with fully functional window wipers. 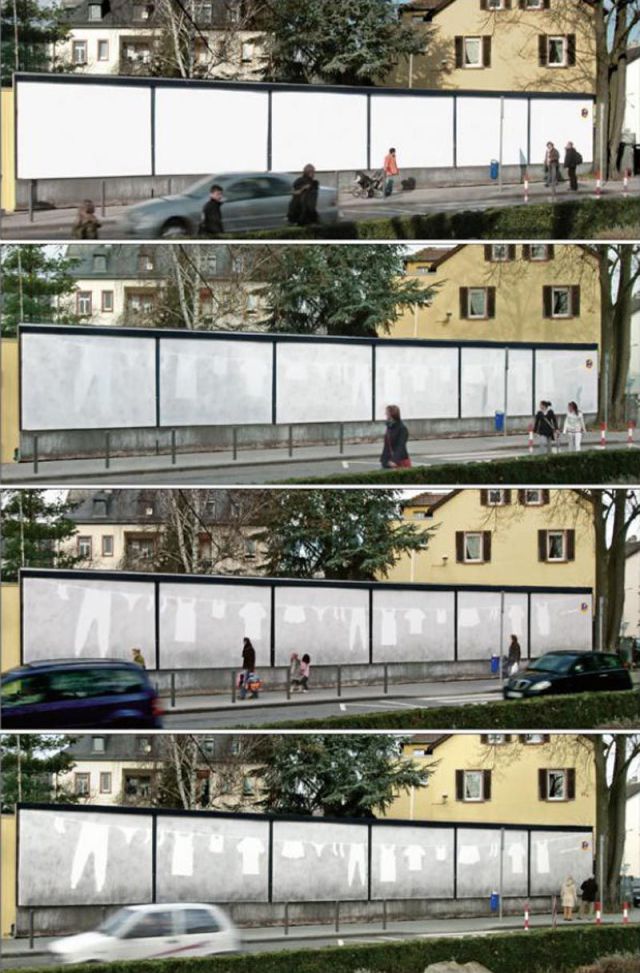 To demonstrate the long-lasting whiteness of Tide detergent, billboards covered in cotton with self cleaning effect were placed on a really busy road. After a few weeks, they became more and more polluted and clean clothes were revealed.

McDonald’s set up this billboard in Chicago. It functioned as a sundial letting the sun creep through the menu. 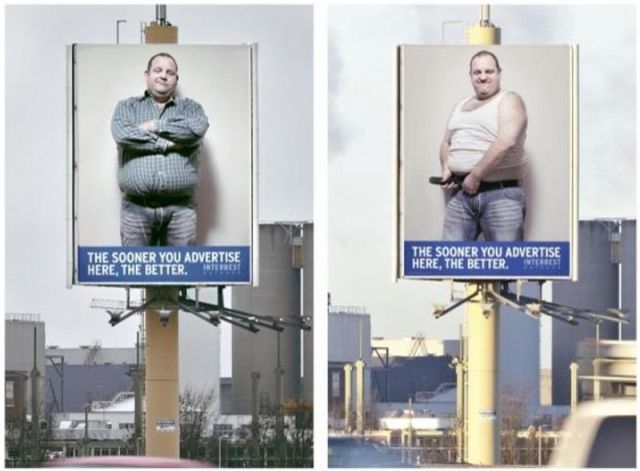 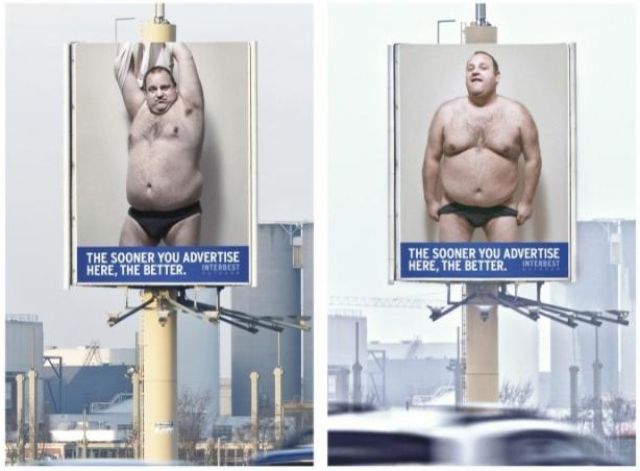 “The sooner you advertise here, the better.” Interbest used an overweight male stripper to build awareness of their billboard visibility. The start of a series – the guy keeps stripping until an advertiser buys the space to save everyone. 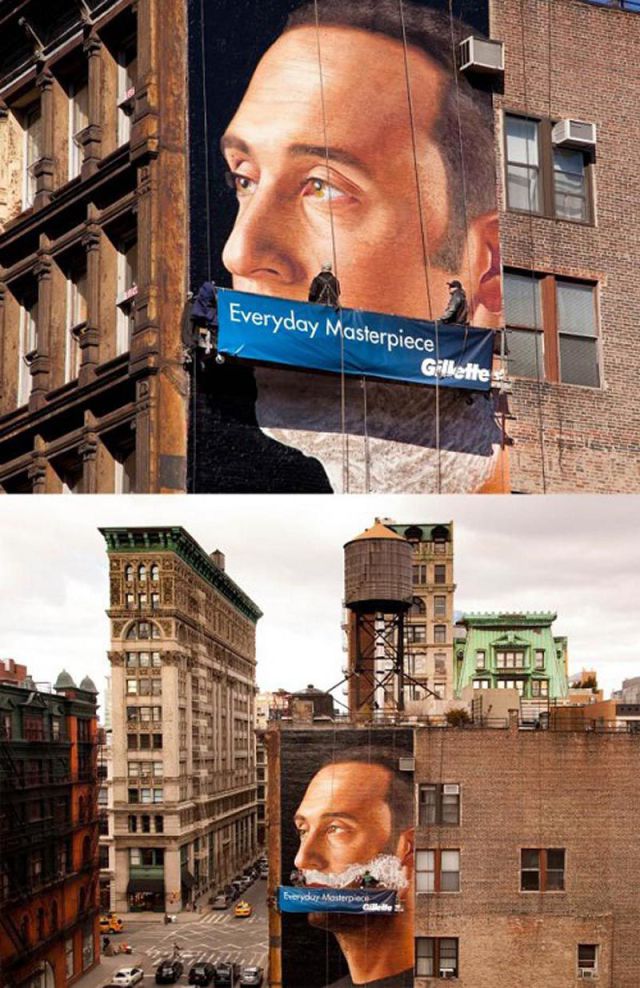 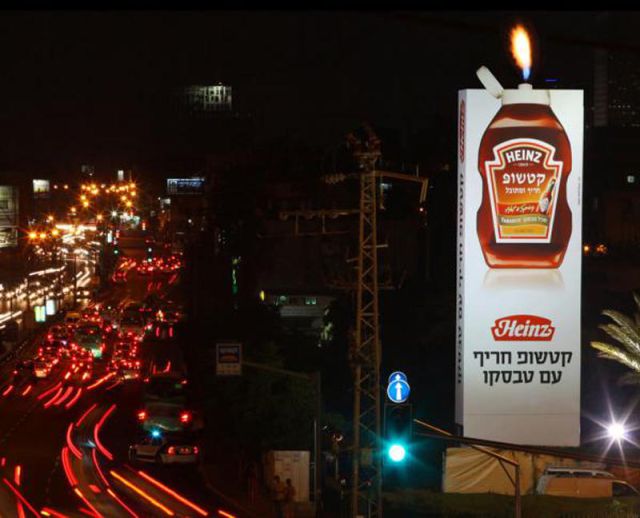 This advertising initiative promoted Heinz new Hot & Spicy Ketchup with Tabasco. The company created a live fire billboard. The fire was coming out of the ketchup bottle. 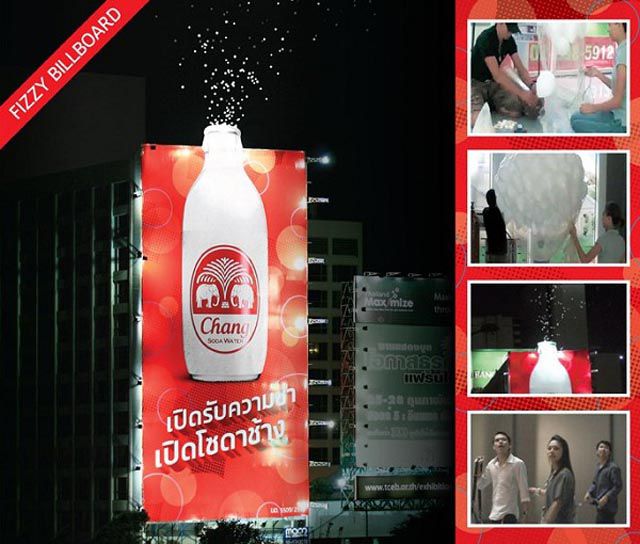 A giant billboard was made for Chang Soda in Bangkok. This cool advertisement released thousands of balloons just when people were getting ready to go out to restaurants, bars and clubs on Friday and Saturday nights.

This billboard campaign was created to excite people that their days can be greater with metservice.com as their planning tool. For ‘rain’ simulated and real rain water spun rainbow-wheels. For ‘wind’ the wind spun bright-colored pinwheels. 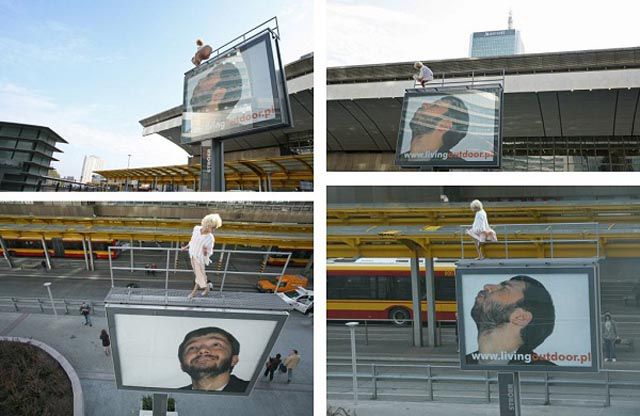 This live billboard performance was launched in Poland. “Marilyn Monroe” walked on the top of a billboard with scrolling face of a man who blowed to rise her dress into the air.