People spend a big amount of time away from home. So advertising agencies have nothing left to do but master the most of the street “media”, including city benches. 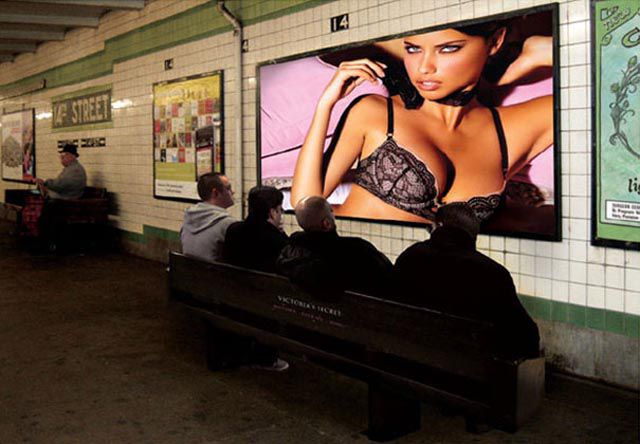 Victoria’s Secret placed its bench in the subway. This bench is very close to the poster with supermodel Adriana Lima in bra from the new VS collection. 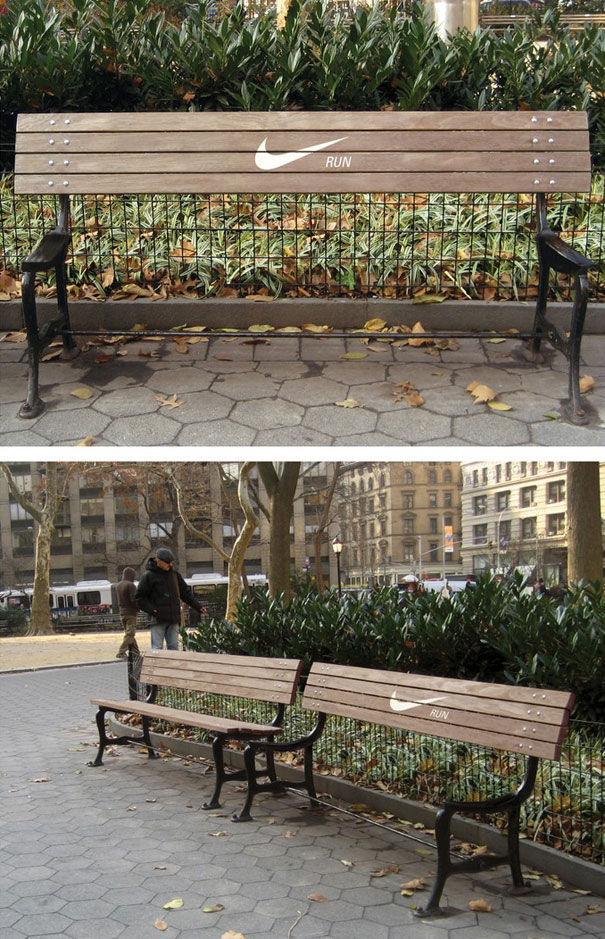 Nike prevented people from sitting on benches. The company has removed the planks where you could sit and left only the backrests. 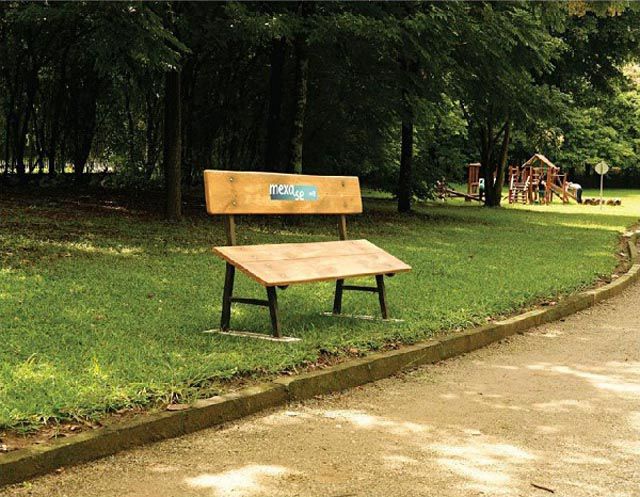 Companhia Athletica placed slanted benches in parks. Every time someone tries to sit down, they slide off. 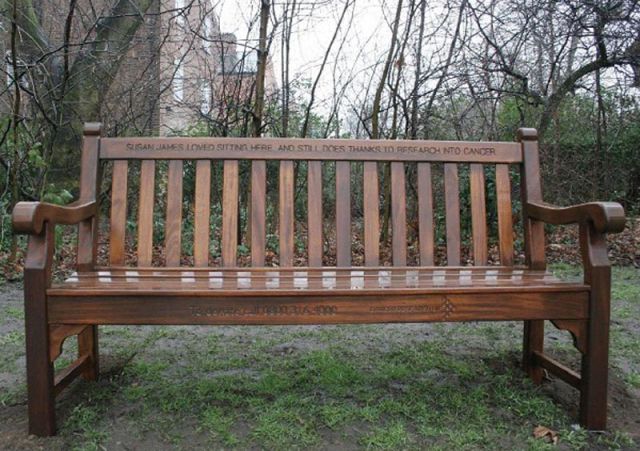 Cancer Research UK used engraved memorial park benches to commemorable people who survided the disease. “Susan James liked to sit here. And she still loves it thanks to cancer research”, one can read on each of the 8 benches. 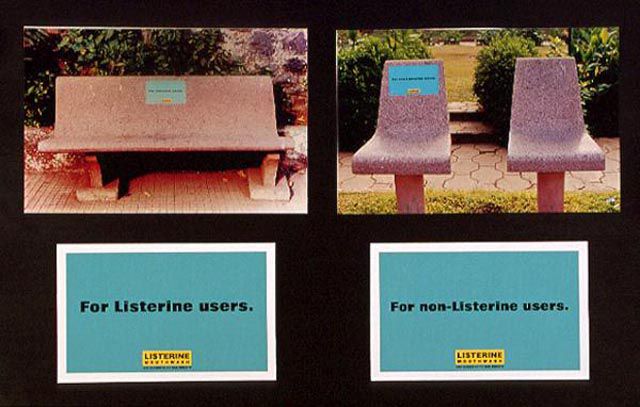 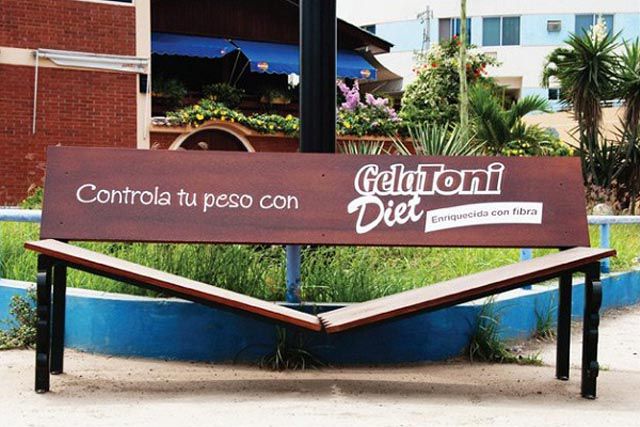 This broken bench was installed to advertise GelaToni Diet dietary gelatin. It simulates that an overweight person sat on it. A sticker saying “Control your body weight with GelaToni Diet” is pasted on the backrest’s front. 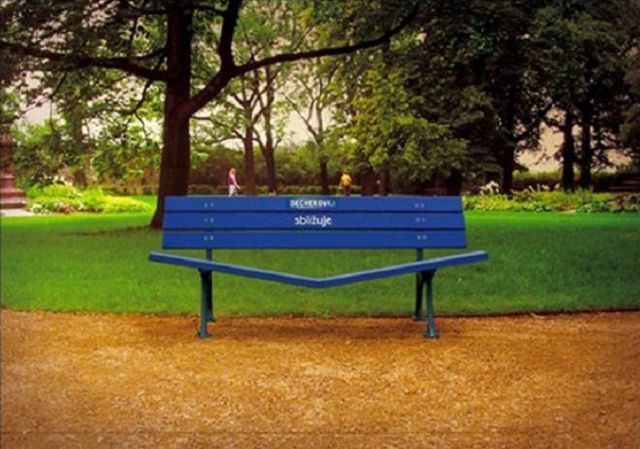 Becherovka is traditional Czech liquor that captured long-term commucation stategy in a slogan “Get closer”. 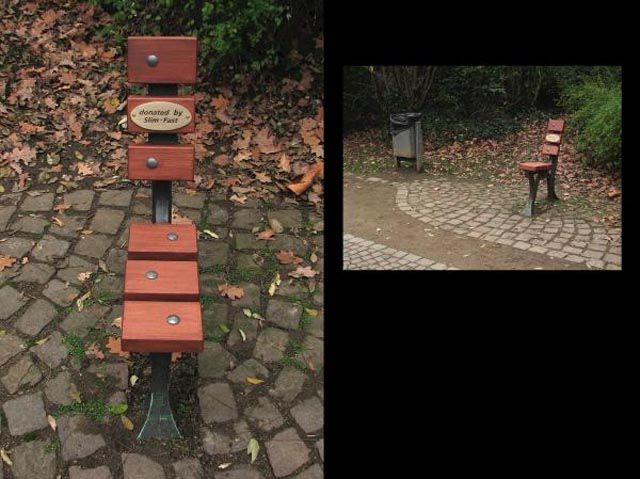 This small bench is an ad created by McCann Erickson for Slim Fast, a diet drink. The bench implies that people who are not able to sit on it have to lose weight. 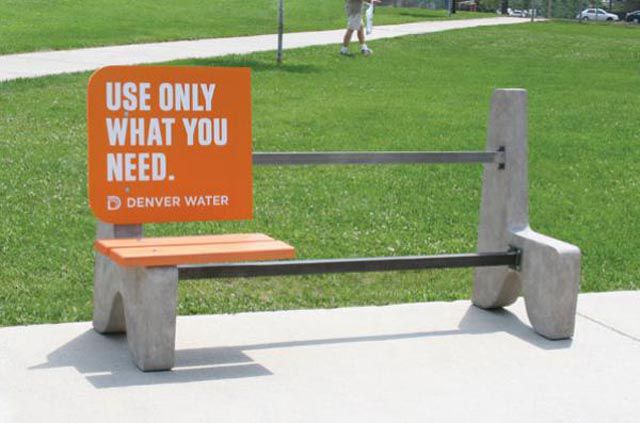 This bench features the Denver Water’s slogan “Use only what you need” placed on corners of the park benches leaving the rest of them blank. The goal of this campaign is to reduce water consumption. 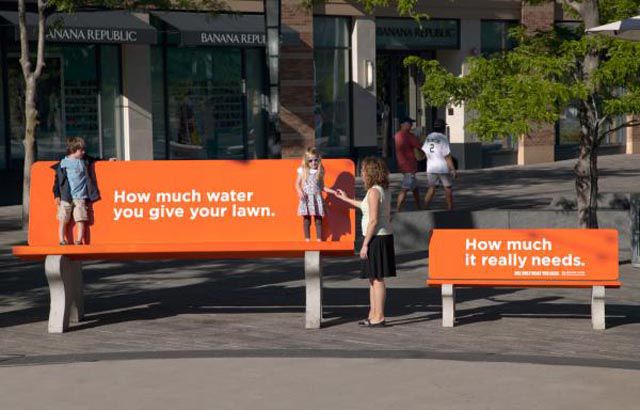 The Denver Water also used the two benches of various sizes to demonstrate the difference between how much we consumpt the water and how much we really need. 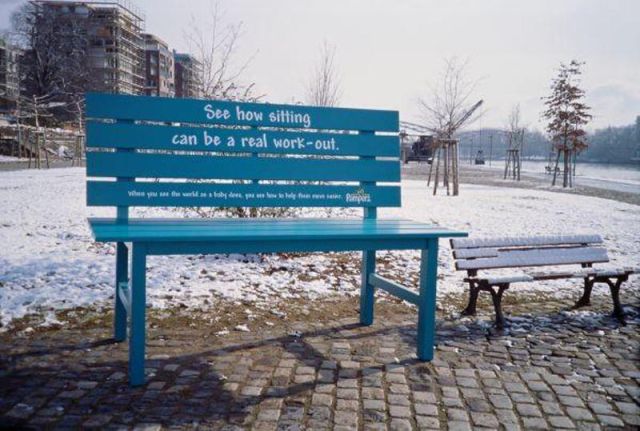 “See how sitting can be a real work-out”, this bench says. 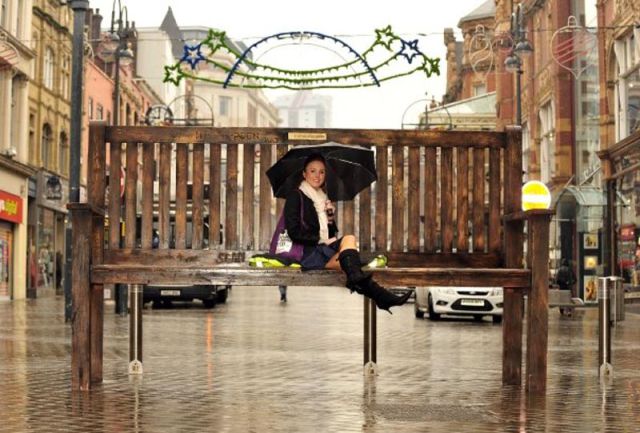 This giant bench used as part of Panasonic advertisement is made from wood and then artworked. The bench had graffiti applied with names and tags and was then distressed to look weathered. 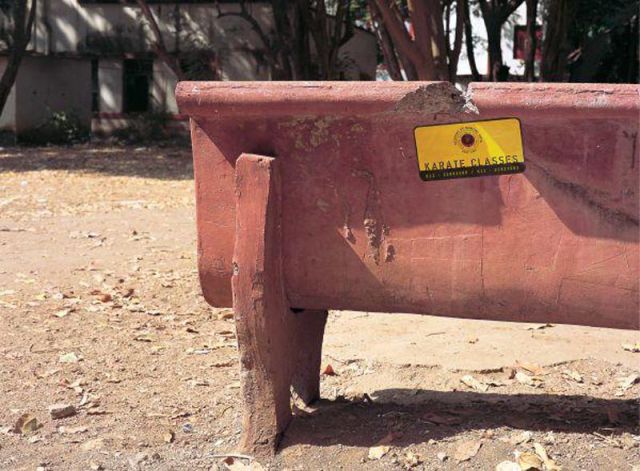 This bench, made of stone, had a crack in it. Martial Arts Academy placed a sticker under the crack, indicating that someone had hit the bench with the palm of his hand. 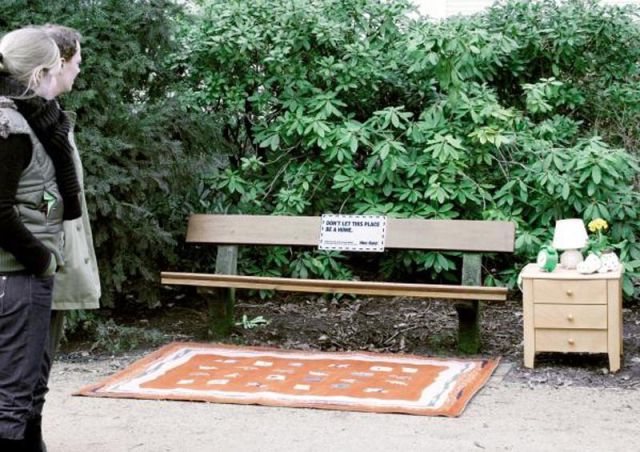 Homeless people usually sleep on benches in parks and this way Hinz & Kunzt Street Newspaper wants to make people aware these are far from ideal circumstances to live. The sign on the bench says, “Don’t let this place be a home”. 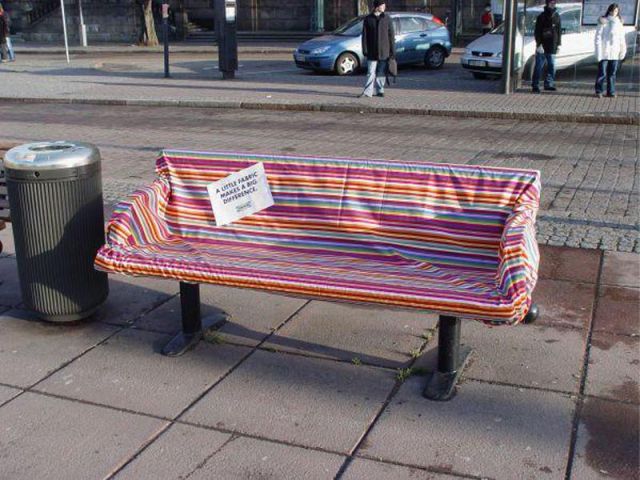 For the campaign called “A Little Fabric Makes A Big Difference”, Ikea covered everyday items such as benches with fabric. One result was this “cozy” sitting place. 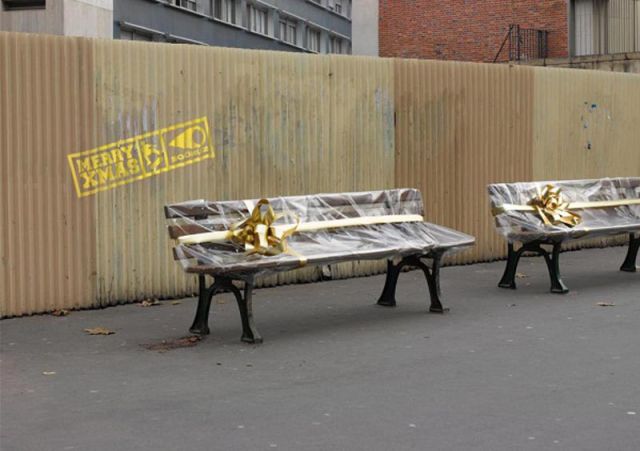 What do you give a skater for Christmas? Sooruz in France have it worked out in this print advertising campaign. It wraped up a bench and tied it with a ribbon adding the words, “Merry Xmas”. 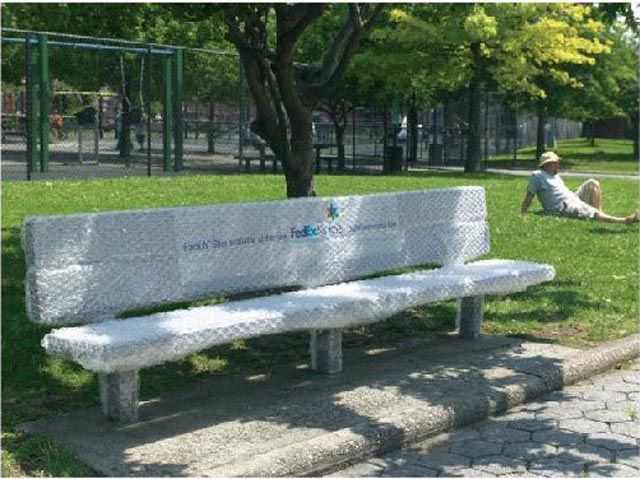 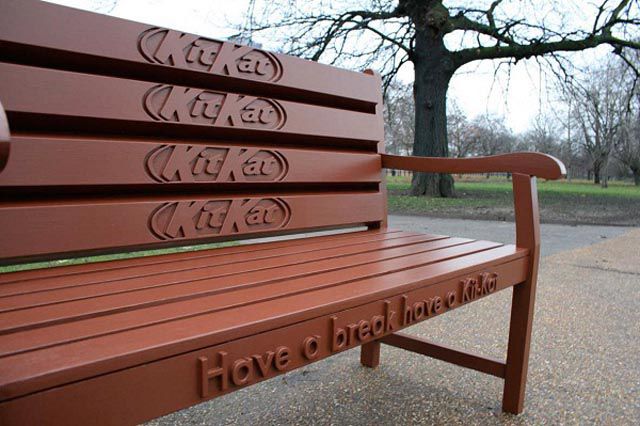 Kit Kat advertises with the slogan, “Have a break, have a Kit Kat”. A bench is a great way to promote their four-finger chocolate-covered biscuit bar. 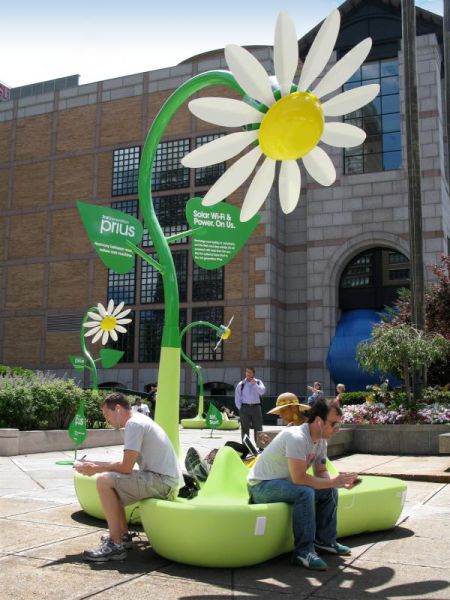 Toyota has planted this 18-foot tall “solar flower” to promote its new Prius car. The solar panels attached to the petals provide electricity to allow people charge their devices. Besides, it provides free WiFi. 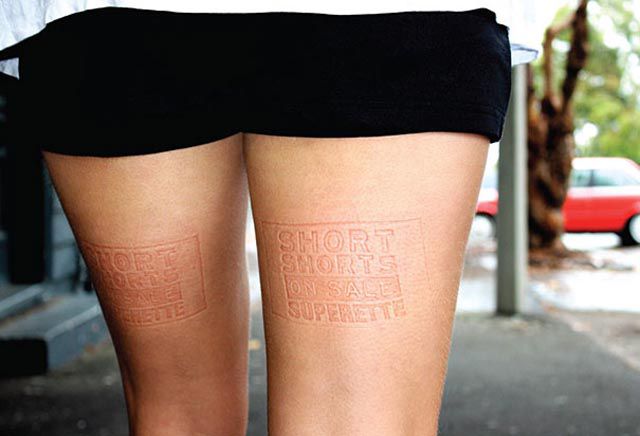 DDB New Zealand came up with this creative campaign for Superette. The thigh-vertising bench contains an indented plate with the words “Short shorts on sale Superette.” Girls who sit on such a bench get imprints on the backs of their legs drawing people’s attention. 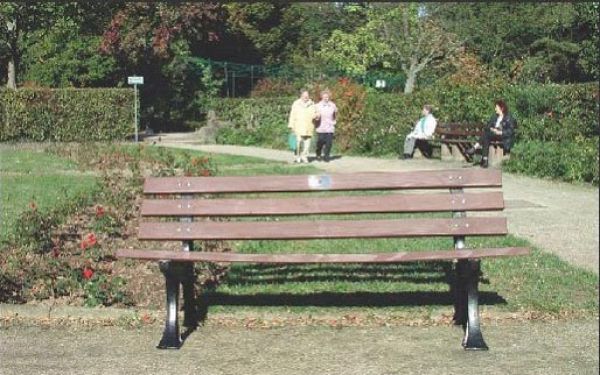 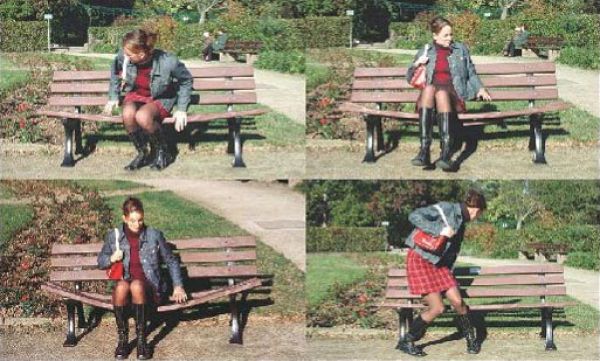 This bench bends downwards when someone is sitting on. The sign on the bench says, “Time for special K, 99% Fat Free”.

Sambone 9 year s ago
That last one is fucking mean.
Reply
0