Geoglyphs are huge designs produced on the ground. They look beautiful and incredible from a bird’s eye view. 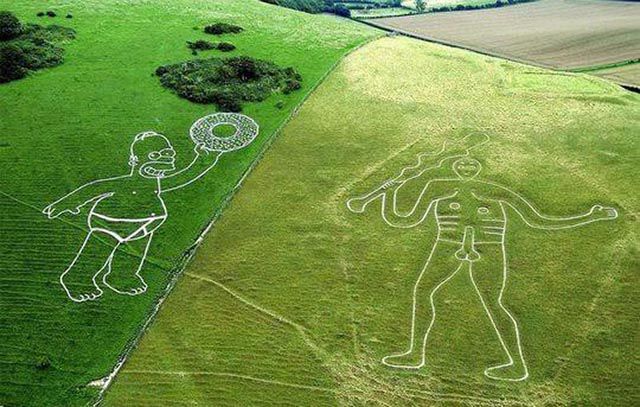 This huge naked man was found on a hillside in the north of Dorchester, England. No one knows who created him. He was first mentioned in the 17th century.Several years ago a figure of Homer Simpson was carved into the side of a steep hill as promotion for The Simpsons Movie. 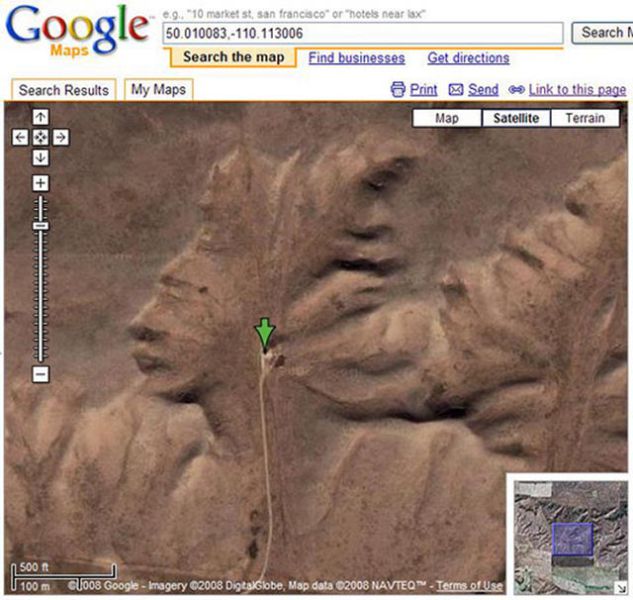 Even though it looks like a man-made creation, the Badlands Guardian was created through erosion of soil by the action of water and wind. It is located in Alberta, Canada. His “earphones” were made by men. They are a road and an oil well. 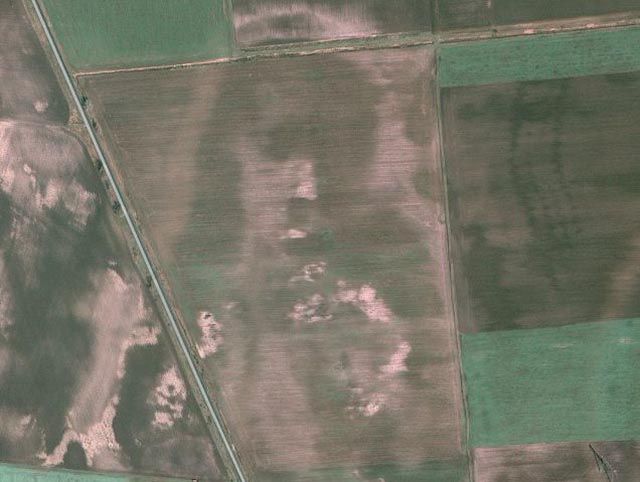 This seems to be the face of Jesus Christ seen through Google Earth in the fields of Hungary. 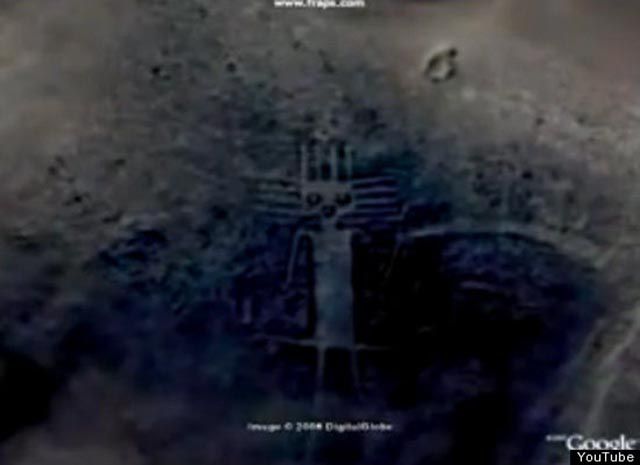 The Atacama Desert in northern Chile is home to this pictorial geoglyph. Being 86 meters long, it is the largest human-like ancient geoglyph in the world most likely dating c. 900 AD. 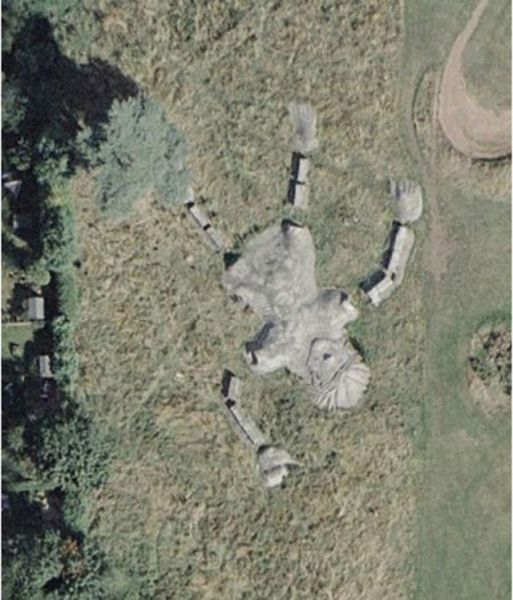 The huge concrete sculpture of Gulliver was built for the Craigmillar Festival Society in Edinburgh in 1976. 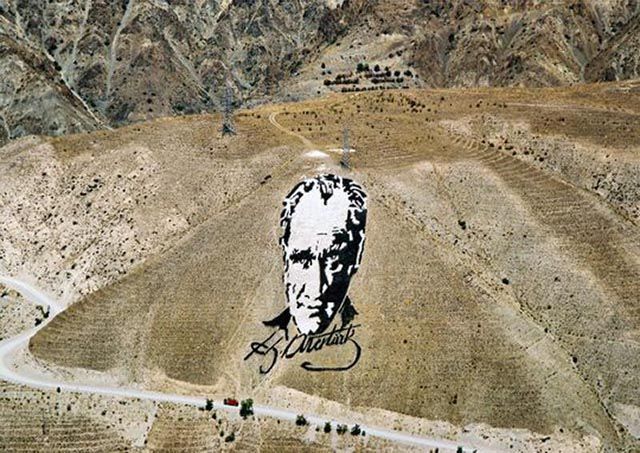 The portrait of Mustafa Kemal Ataturk, the first President of the Turkish republic, is the world’s biggest portrait. It was made by 3,000 soldiers on an area of 7,500 square meters. 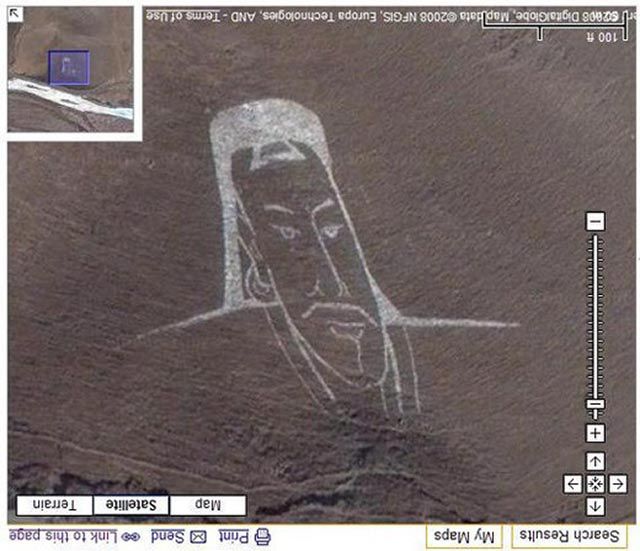 The 455-foot portrait of Genghis Khan, founder of the Mongol Empire, is located in the south of Ulaanbaatar, Mongolia. 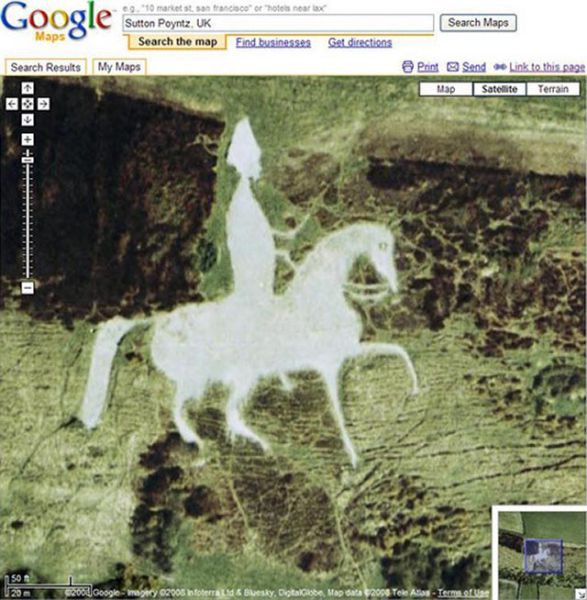 This hill figure is sculpted in 1808 into the Osmington hill in the UK. The 60-meter tall pink rabbit is found in the mountain Colletto Fava in Piemonte, Italy. It was created by Gelitin, a group of artists from Vienna. 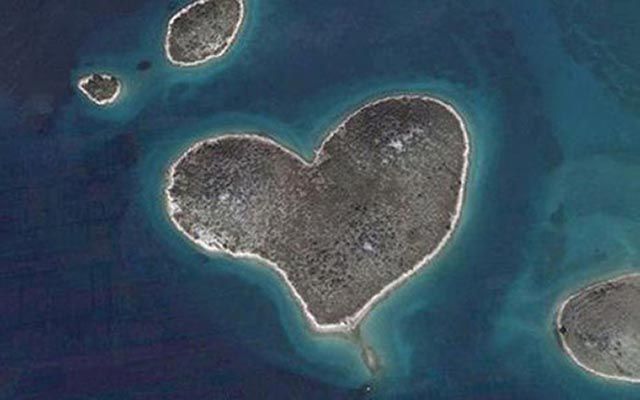 This heart-shaped island located in the Adriatic has become a holiday hit for couples because of its unusual shape. 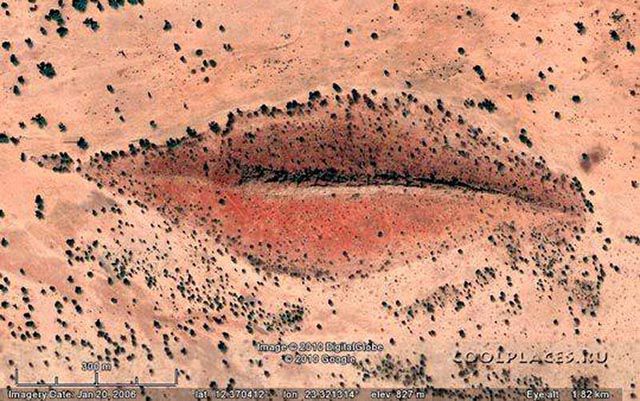 This 0.5-mile long hill is located in Gharb, Darfur, in Sudan. It looks special from a bird’s eye view only.

An Island in Time 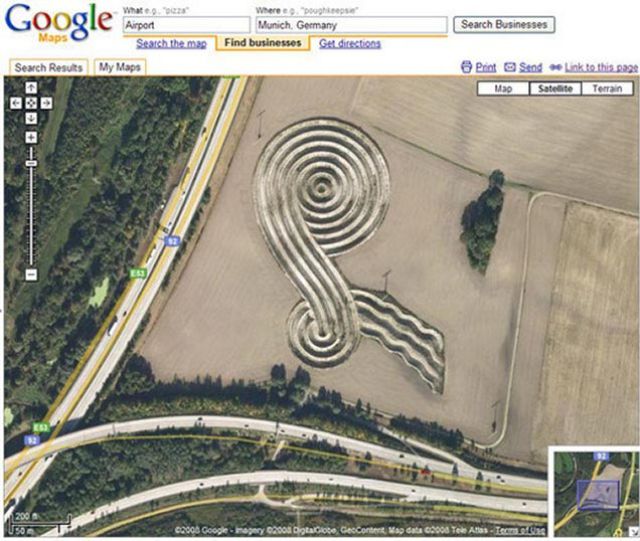 Celtic sign “An Island in Time” was created by Wilhelm Holderied near Munich airport in 1995. 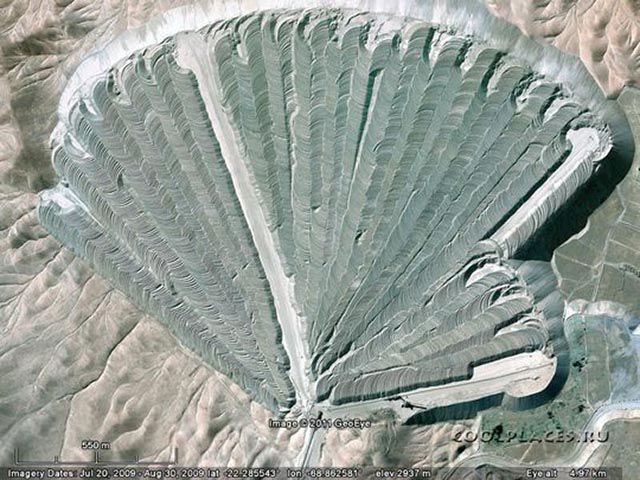 Copper reserves and resources that belong to the National Copper Corporation of Chile, the largest copper producing company in the world, look like a shell from above. 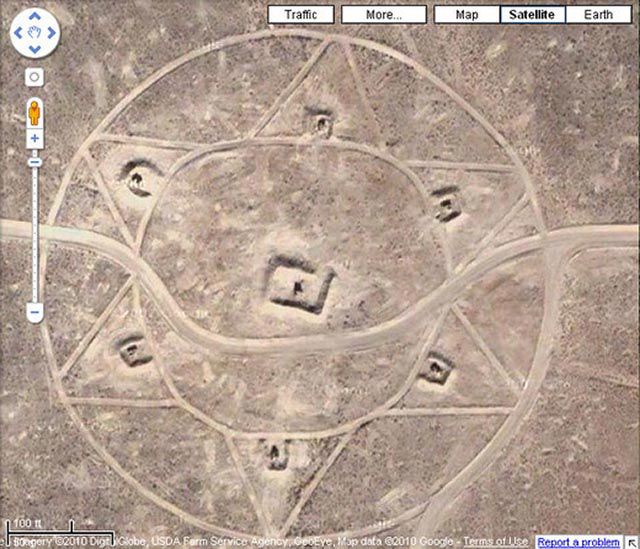 Nevada is the best place for creating bizarre geoglyphs. 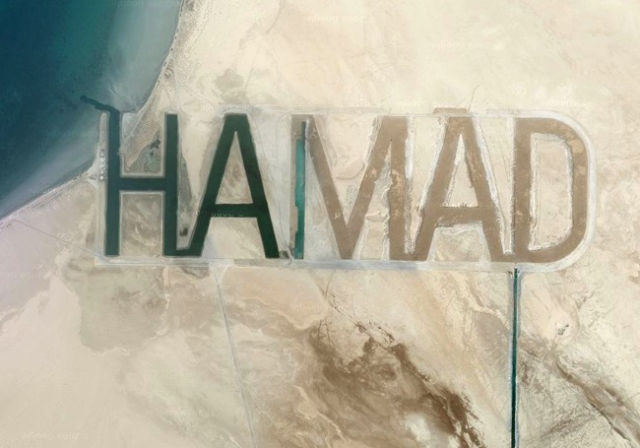 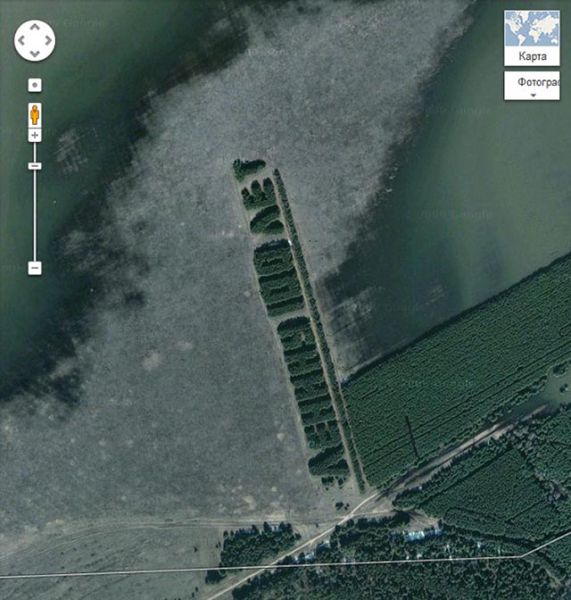 Russia has a lot of giant images of the Soviet era leaders. You can see green trees inscripting “Lenin’s 100 years” in the Kurgan region near the village of Arkhangelskoe. 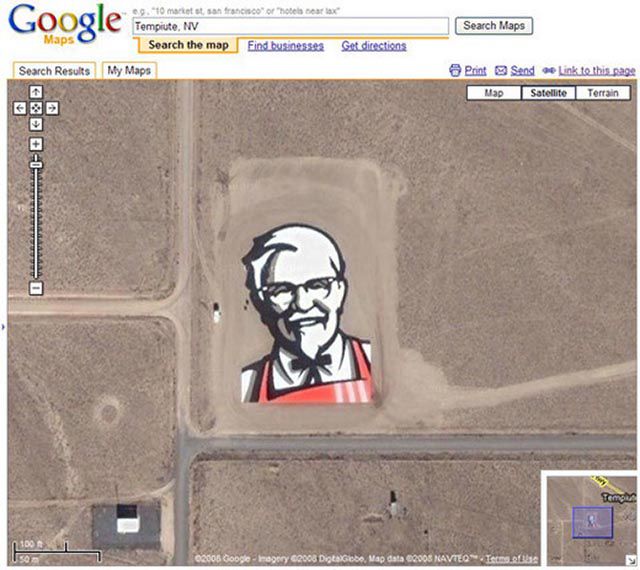 As part of publicity for the new logo, KFC commissioned a giant, 87,000-square foot version of it that can be seen from space. 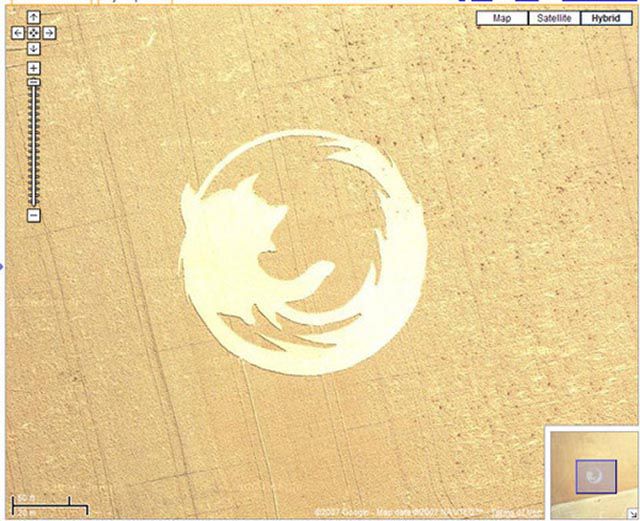 This is a huge accurate Firefox logo made in a crop field. 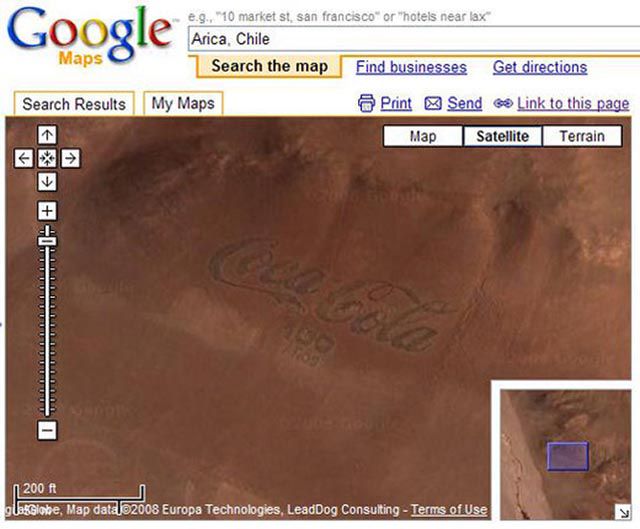 A huge Coca Cola logo, 50 meter tall and 120 meter wide, exists in northern Chile. The logo is made out of 70,000 Coke bottles in the desert to celebrate Coca Cola’s 100th anniversary. 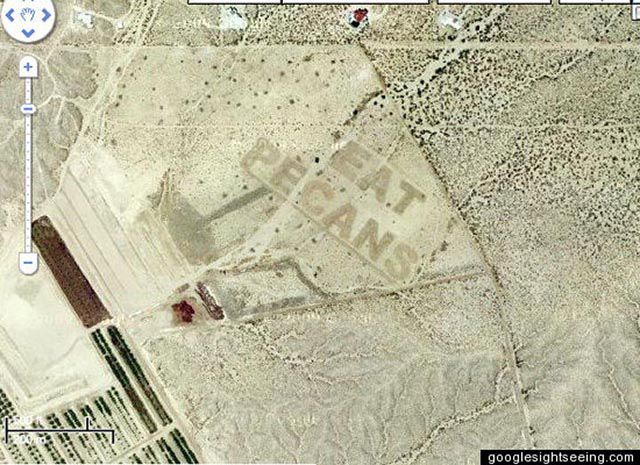 Simple, yet very impressive call to “Eat Pecans” is located in the State of New Mexico.

Enter your name 11 year s ago
this sit is crap. why when someone is really looking for something dowe have to go through crap like this...
Reply
0

treehugger73 8 year s ago
#1 Nobody carved a Homer Simpson next to the Cerne Abbas Giant. This would never have been allowed (and rightly so). It's just some photoshop.
Reply
Powered by