Facebook has been a blessing and nuisance to many, but for certain people it has caused nothing but trouble. See the wildest, stupidest and craziest stories of 2011 from the huge social website. 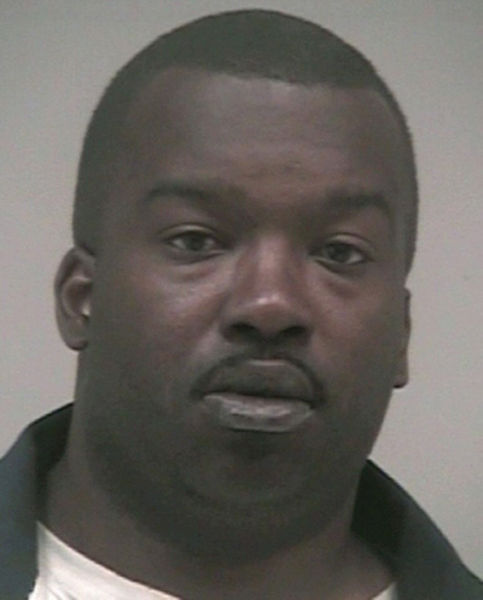 In November, a burglar signed into Facebook from a computer inside a home he broke into before sprinting from the scene. Unfortunately, he forgot to logout before he left. 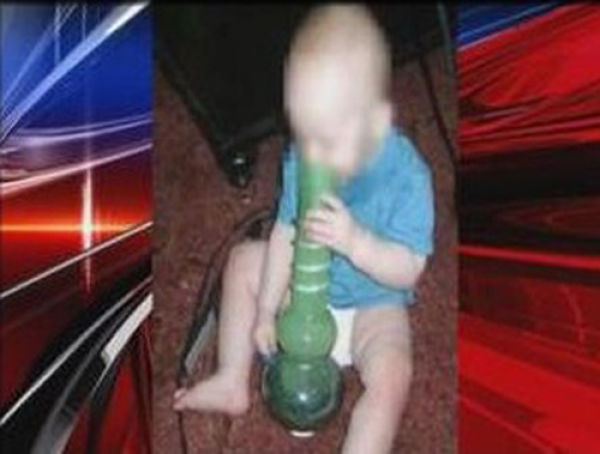 In February, a mom was arrested for posting pictures of her baby and a bong on Facebook. 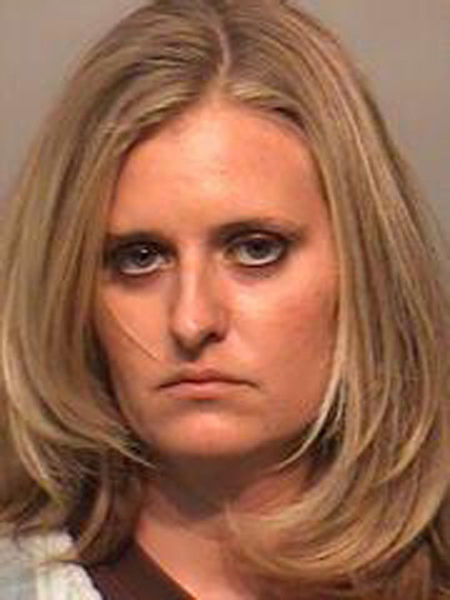 Nikki Rasmussen was arrested for lighting her friend's house on fire because her friend defriended her on Facebook.

A police report says that when an officer asked Nikki Rasmussen about Jen Harris, Rasmussen said “… the two are no longer friends due to a dispute over Facebook. According to Nikki, Jen is angry with her because she ended their friendship on Facebook.” 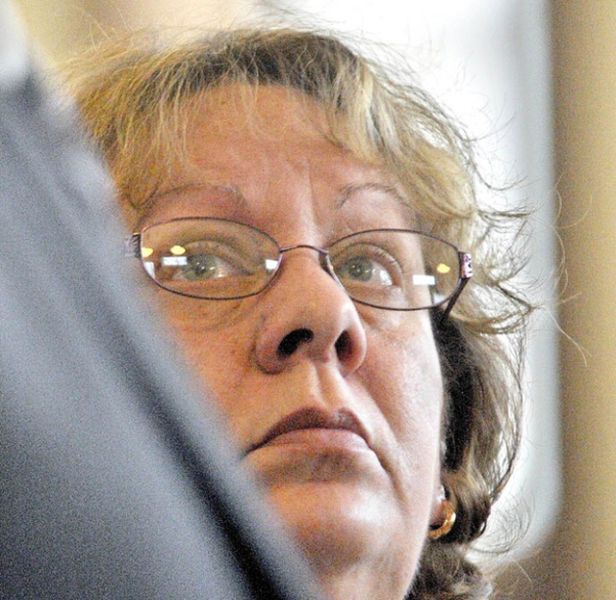 For about a year and a half, 54-year-old Bettysue Higgins embezzled $166,000 from her job at a law firm. She used most of this money to pay for virtual coins on YoVille and Mafia Wars.

In December, she was arraigned in court and faces up to 6 years in prison. 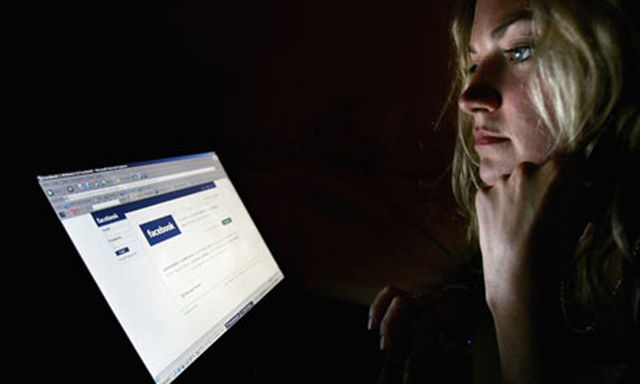 In October, a study came out that found 1 in 5 women would choose Facebook over sex.

Cosmo asked 2,000 of their readers “what would you rather live without for one full week: sex or Facebook?”, and 20% responded that they'd take rather have Facebook than sex. 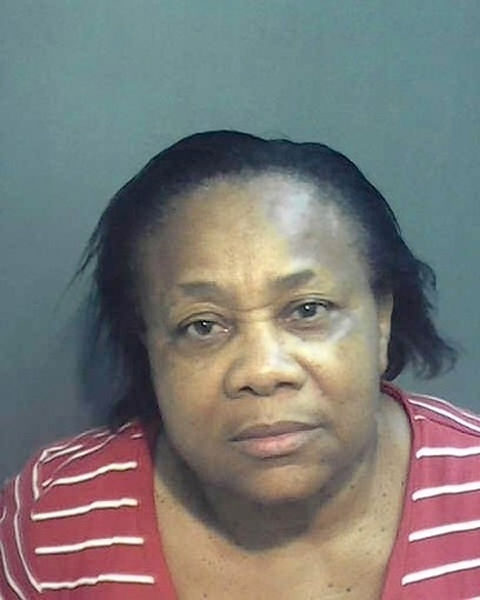 62-year-old Althea Ricketts was charged with aggravated child abuse after she beat her son for having a Facebook page. 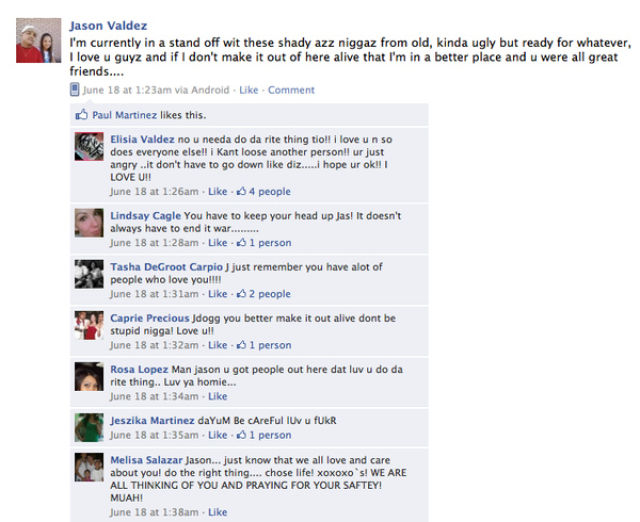 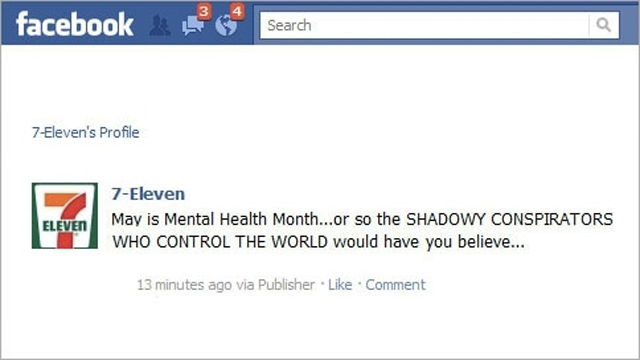 In May, 7-Eleven was in trouble for mocking Mental Health month with this Facebook status. 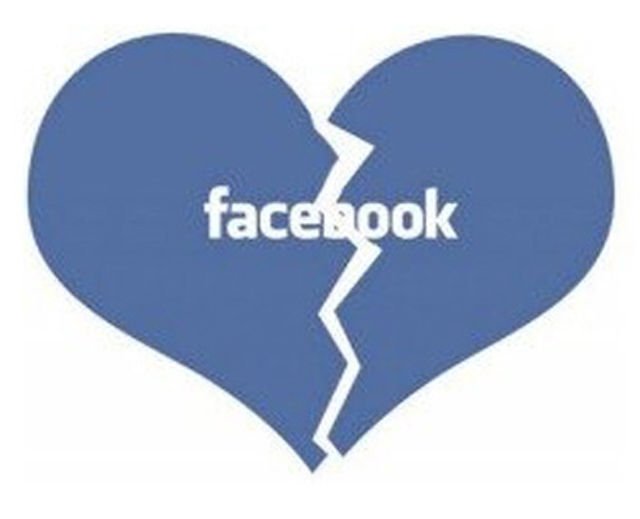 According to the American Academy of Matrimonial Lawyers, Facebook use is now cited in one in five of every U.S. divorce cases.

In December, a cab driver got revenge on a passenger who didn't pay and left his phone by updating his Facebook status. 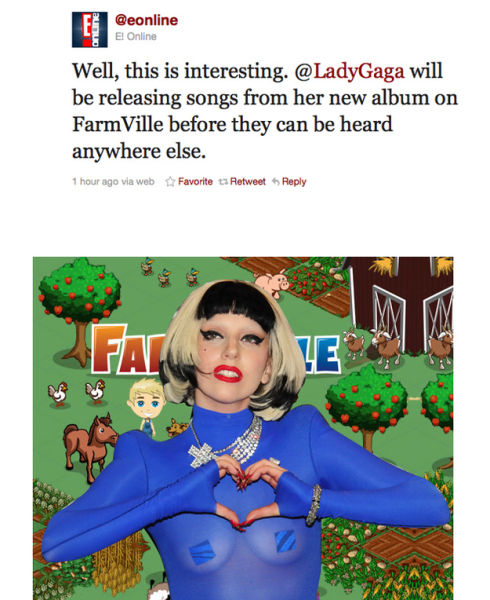 In May, Lady Gaga used Farmville to premiere new music. 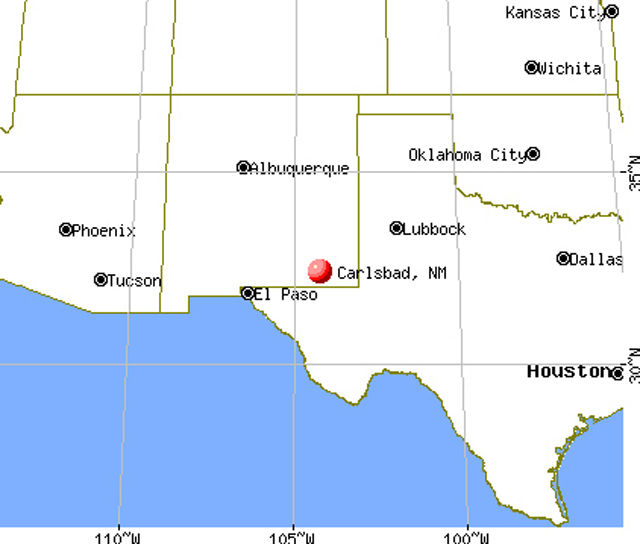 Benito Apolinar reportedly told his wife that "he had so many comments on his status" and was unhappy that she did not respond to the post.

"That's amazing everyone 'likes' my status but you, you're my wife. You should be the first one to 'like' my status," he allegedly told his wife.

He then assaulted her. 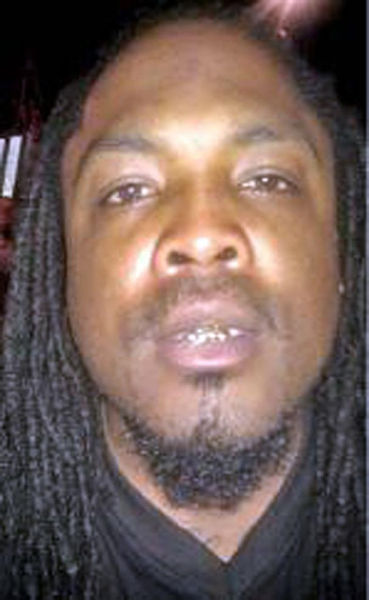 In August, a woman successfully hired a hitman on Facebook after posting a message that offered $1,000 to anyone who would kill her ex-boyfriend. 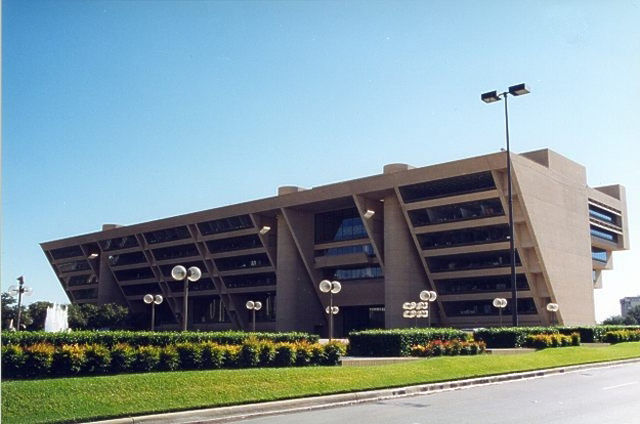 In July, two dozen Dallas City Hall workers received counseling after a probe showed they spent too much time on Facebook. 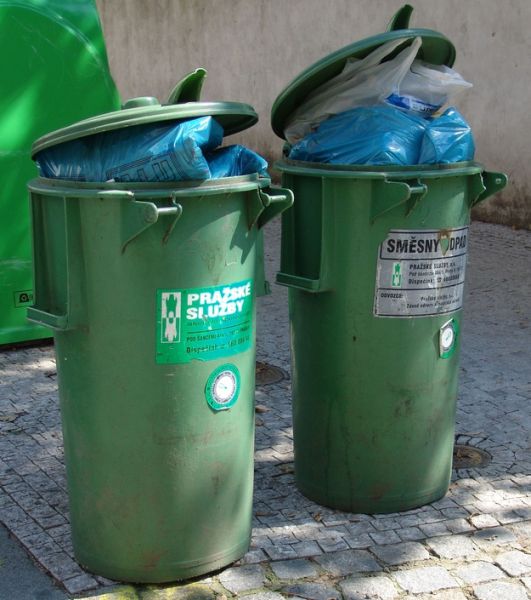 In July, a 19-year-old Watertown, New York man was arrested after posting a two-minute video on Facebook that showed him ramming his car into trash cans set out along a quiet street.

In June, Sarah Palin posted a note on Facebook saying WTF stood for "Winning The Future." 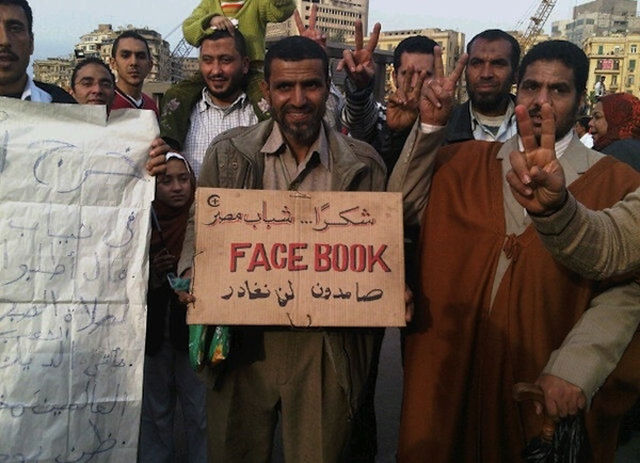 In February, an Egyptian man named his daughter Facebook. 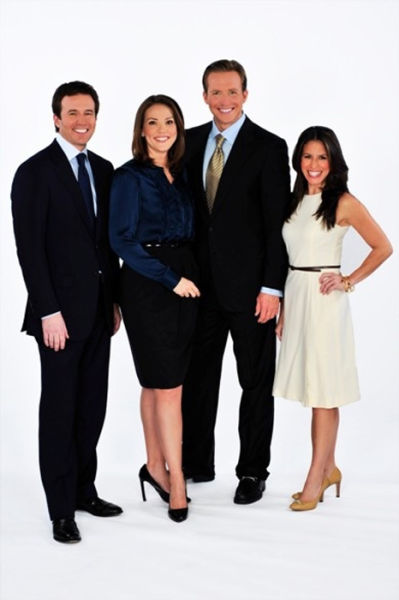 In June, France banned radio and television news anchors from saying the words “Facebook” and “Twitter” on air. 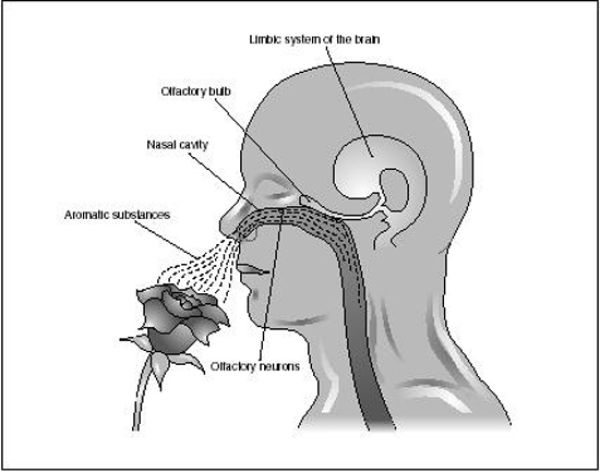 In May, a study came out that said young people would rather lose their sense of smell instead of their social networks.

​A McCann survey of 6,000 people aged 16 to 30 found that 53 percent of respondents would rather forfeit the ability to smell than lose access to social networking websites.

In April, after the Royal Wedding, the Pippa Middleton's Ass Appreciation Society was started. It now has over 240,000 fans. 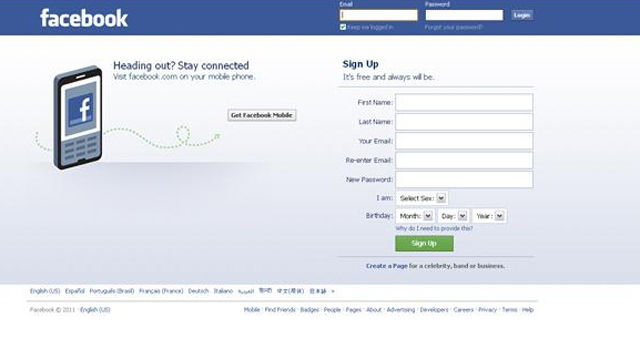 The FBI charged a man with robbing five Detroit-area banks after investigators matched him to photos on Facebook. The robber was wearing the same clothes in his profile pictures as he was when he was robbing the banks.

In October, a woman found out everyone knew she was arrested for having sex on a bus via Facebook. 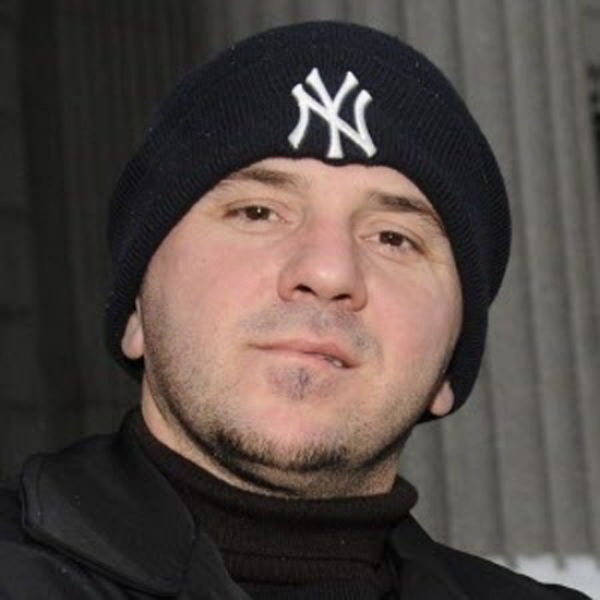 In February, a Staten Island man tried to sue Facebook for $500,000 for inexplicably knocking him off of Facebook without warning.

"I lived in a communist country where people had no rights. This looks the same to me," the Montenegro native said. "I'm not doing this for money. I'm doing this for justice," he said. 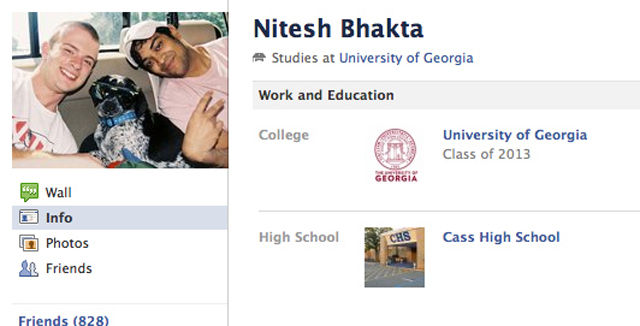 University of Georgia sophomore Nitesh Bhakta used Facebook to help foil an armed robbery in progress at his family's home. The 20-year-old was in his room on his laptop when he heard his grandmother scream.

"As soon as I opened my door, I saw three hooded guys like all masked in black at the front door," Bhakta said. "I shut my door, locked it, grabbed my laptop, went into the attic and hid."

"I don't think [Facebook] is really meant as a lifesaving tool, but it's the only way I could think of contacting someone immediately to call for help," he said.

So, as the intruders rifled through the home, Bhakta updated his Facebook status: "HELP, ROBBERS, NO PHONE." In all caps, naturally.

"A lot of people thought it was a joke," he said. 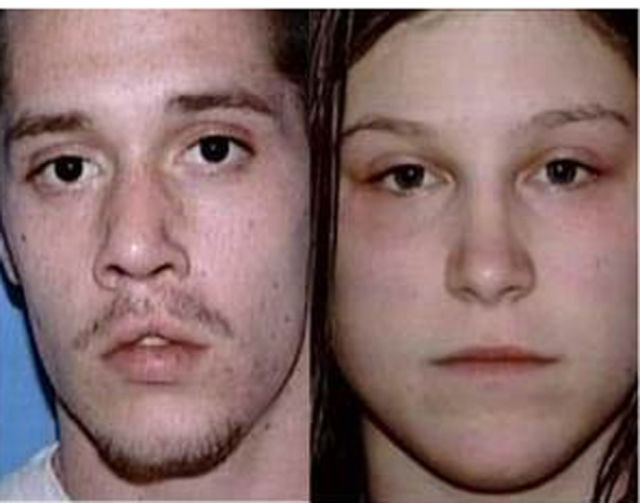 Crystal Yamnitzky and her boyfriend Robert Driscoll stole a $12,000 ring. Shortly after, Yamnitzky posted pictures of it on Facebook with the caption, “Look what Robby gave me. I love him so much.”

They were both arrested shortly after. 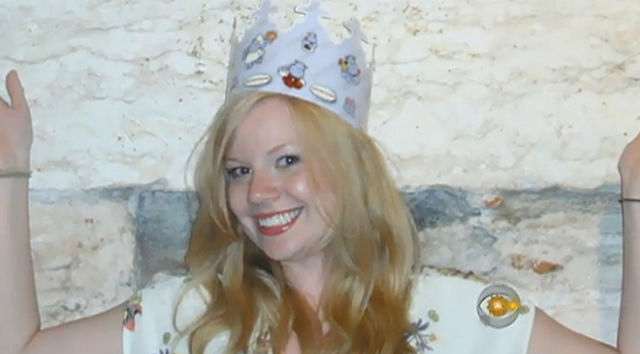 24-year-old Ashley Payne, a public high school English teacher in Georgia, was fired for having pictures of herself drinking wine on a European vacation posted on her Facebook page. 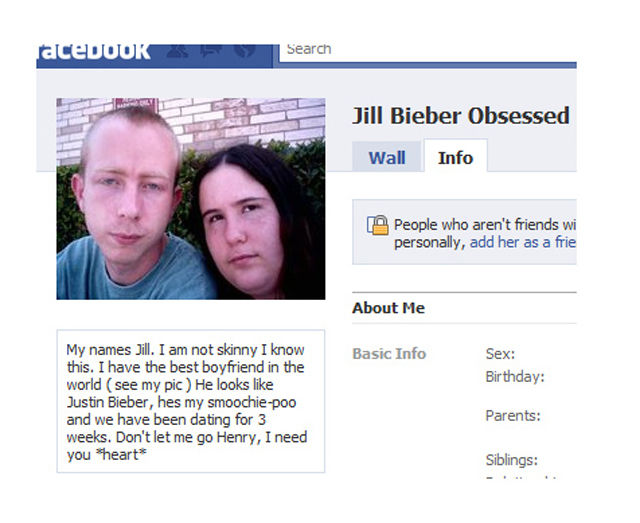 izzimyfizzi 9 year s ago
#29 why? Why would she be fired? I can't understand that one little bit.
Who's business is it what anyone does in their own time. It's not drinking alcohol is illegal.
Reply
0

Rivas 9 year s ago
#21 Just like any other commercial brand, free advertising is illegal (company could have give money to the journalist). Btw, i'm french but have no idea who the people on the picture are.
Reply
0

Antypaladyn 9 year s ago
I heard it was not about free advertising. I heard it is a LAW that forbids to mention these words in the media.

orendadude 9 year s ago
#20-then probably shipped the bitch to america.
Reply
0

Peanut 9 year s ago
Facebook & Mark Zuckerberg both give me the creeps. Why people love it so much is beyond me.
Reply
0

Molon Labe 9 year s ago
Palin always gets the best of Obama. He dropped that "Winning The Future" crap like a hot potato after she started making fun of the acronym.
Reply
0