All these photos of celebrities weren’t a planned photoshoot. 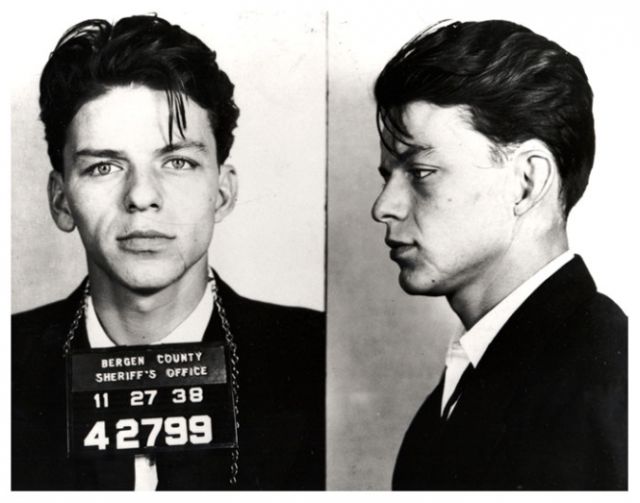 Frank Sinatra was arrested by the Bergen County, New Jersey sheriff in 1938 and charged with carrying on with a married woman. 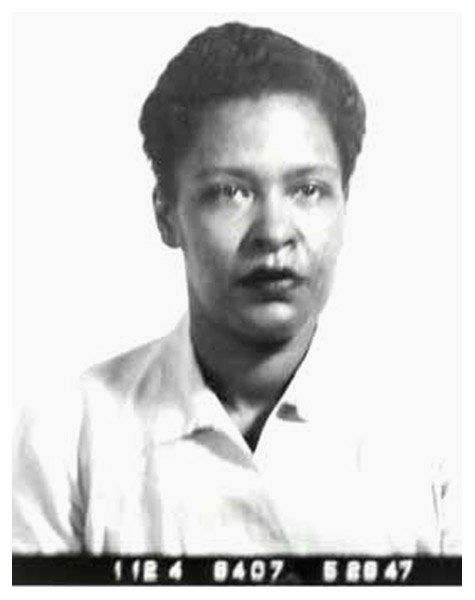 Billie Holiday was photographed by Bureau of Prisons officials in May 1947. 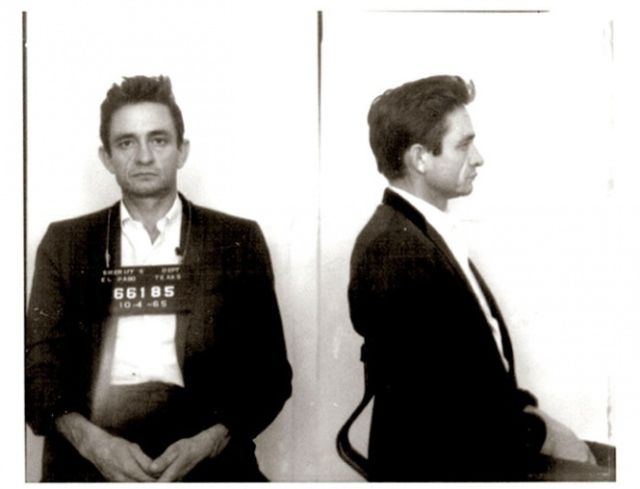 Johnny Cash was arrested in October 1965 when U.S. Customs agents found hundreds of pep pills and tranquilizers in his luggage. 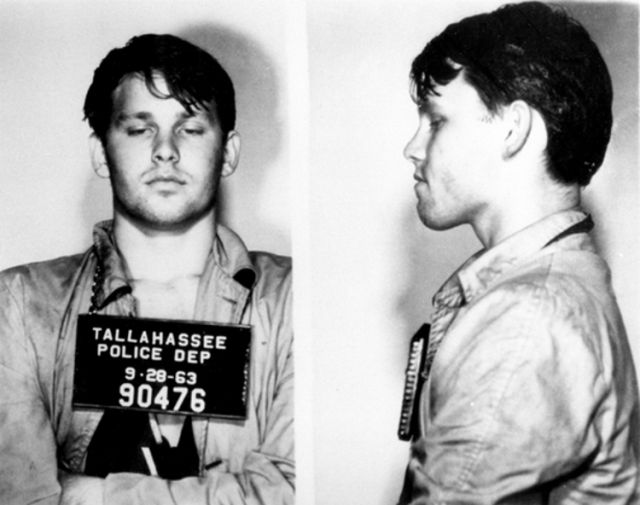 While attending Florida State University, Morrison was arrested for a prank, following a home football game. 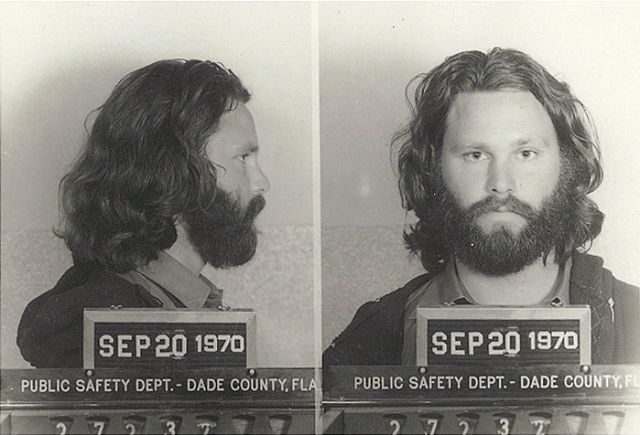 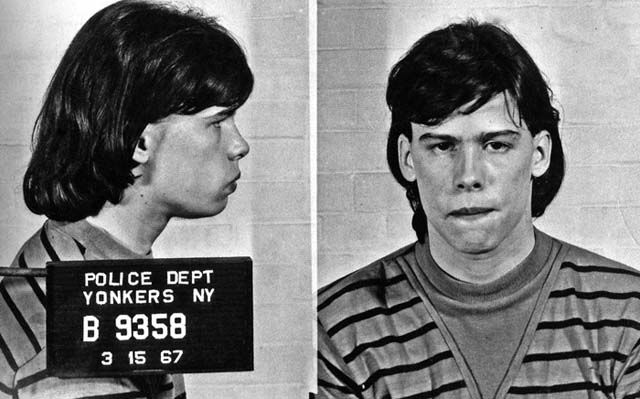 Steven Tyler, frontman of rock group Aerosmith was arrested in May 1967 (he was 18/19 years old) in Yonkers, New York for possession of Marijuana. 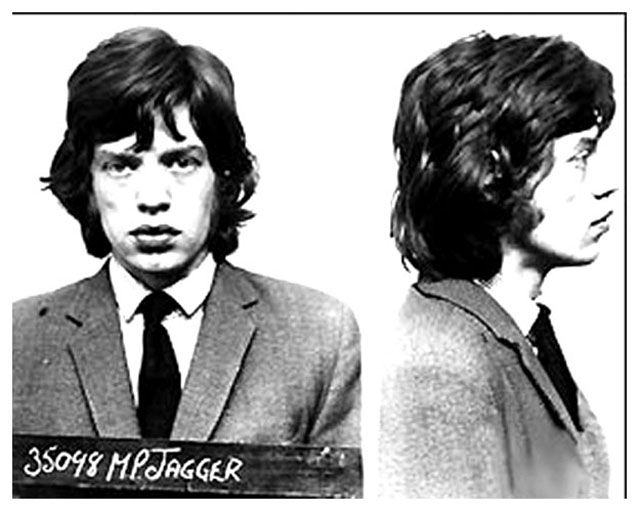 Mick posed for this mug shot in 1967 after being arrested in England on a narcotics charge. 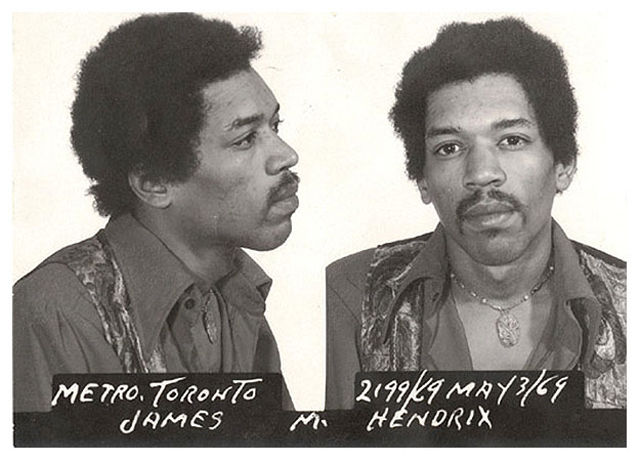 Jimi was arrested at Toronto International Airport airport in May 1969 after customs inspectors found heroin and hashish in his luggage. 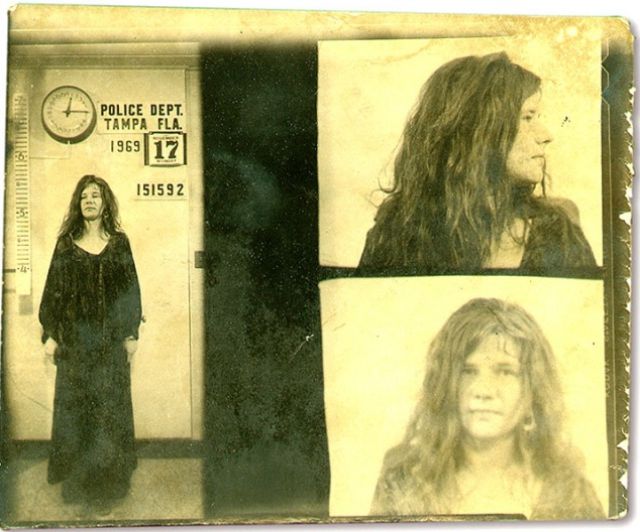 On November 15, 1969, Janis was arrested after her performance in Tampa, Florida, on charges of disorderly conduct after she insulted a police officer. 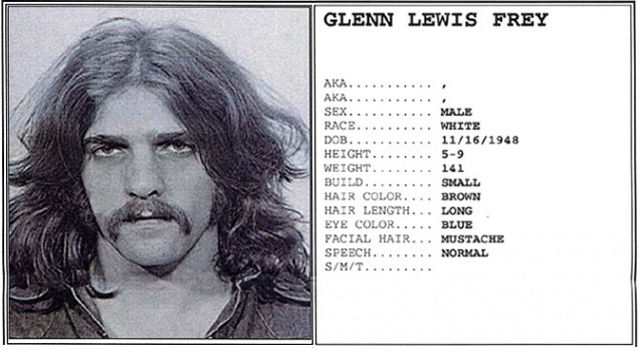 Eagles guitarist Glenn Frey was arrested by Columbus, Ohio cops in May 1973 on drug possession and public intoxication charges. 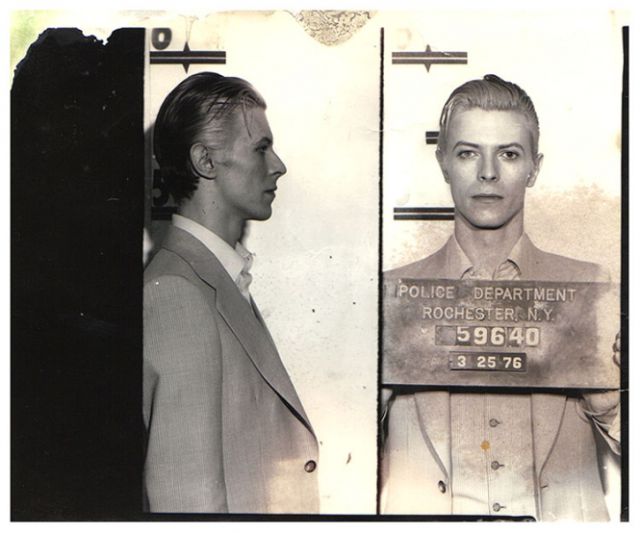 David was arrested in upstate New York in March 1976 on a felony pot possession charge. 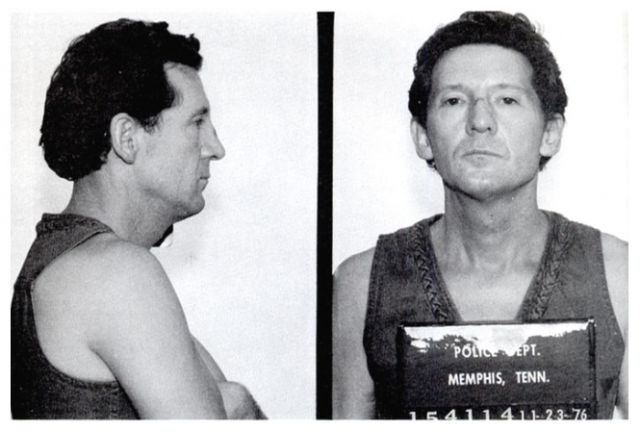 Legendary musician Jerry Lee Lewis was arrested by Memphis police in November 1976 and charged with public drunkenness and gun possession. 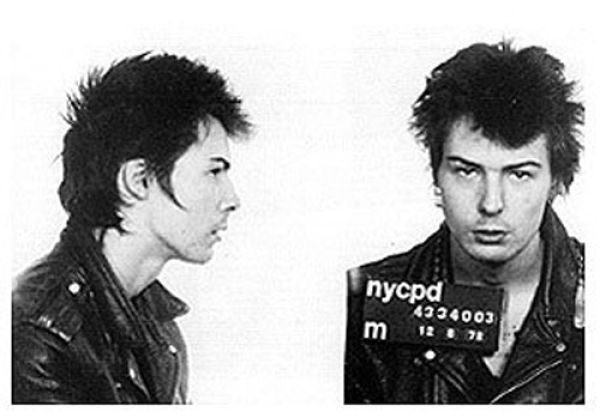 Sid Vicious, bassist for the Sex Pistols, was arrested by New York police for the October 1978 murder of girlfriend Nancy Spungen. 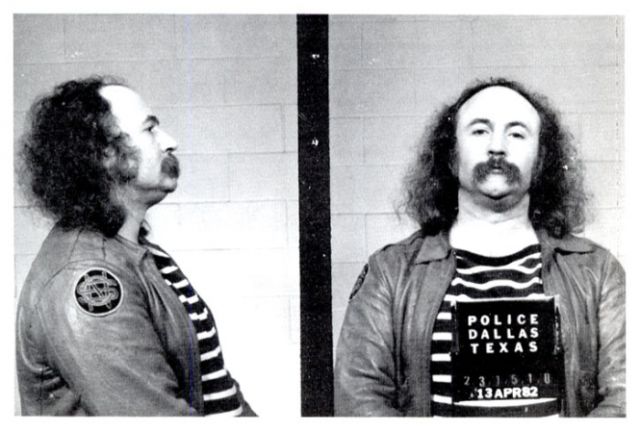 David Crosby, founding member of The Byrds and Crosby, Stills & Nash was arrested by Dallas police in April 1982 and charged with drug and gun possession. 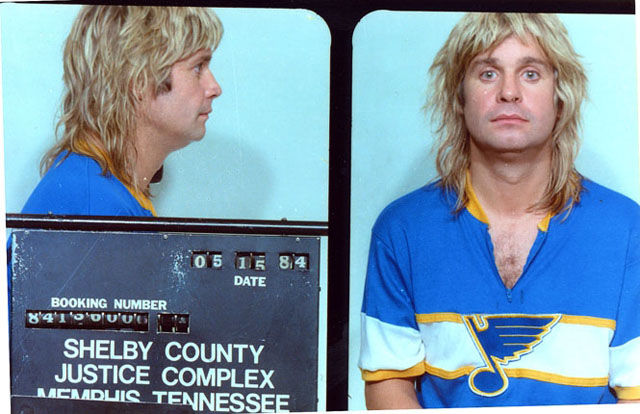 John Osbourne (aka Ozzy Osbourne) was arrested by Memphis cops in May 1984 and charged with public intoxication. 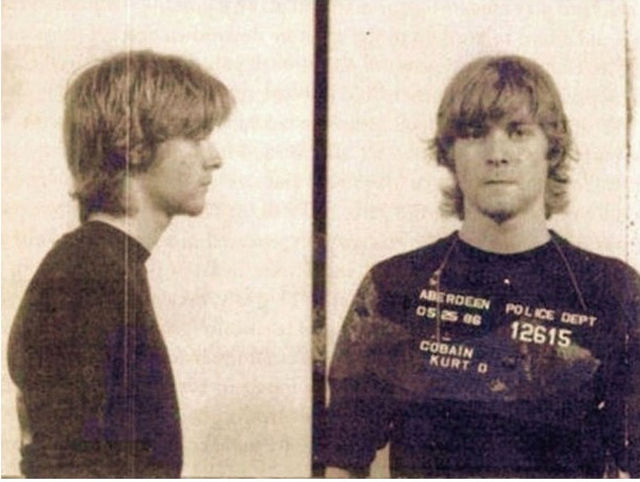 Kurt Cobain was arrested by Aberdeen, Washington police in May 1986 and charged with trespassing while intoxicated. 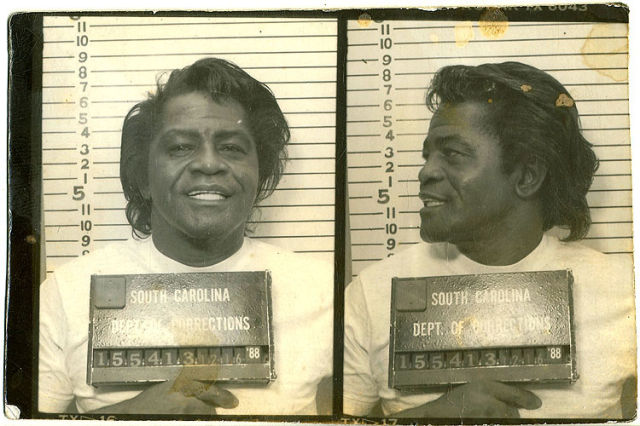 James Brown posed for this South Carolina Department of Corrections mug shot in December 1988 after a jury found him guilty of aggravated assault, weapons possession, and failure to stop for police. 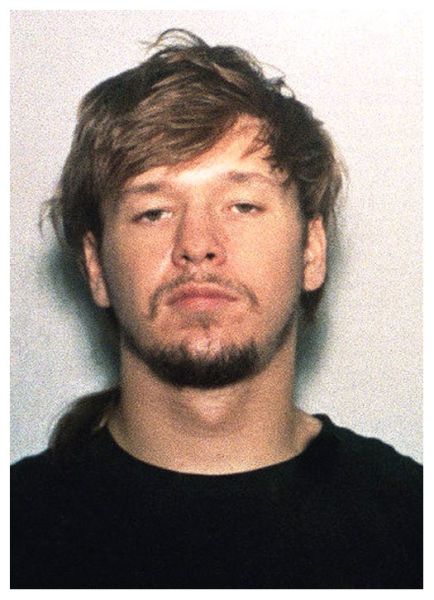 New Kids on the Block member Donnie Wahlberg posed for the above mug shot in March 1991 after Kentucky cops charged him with arson. 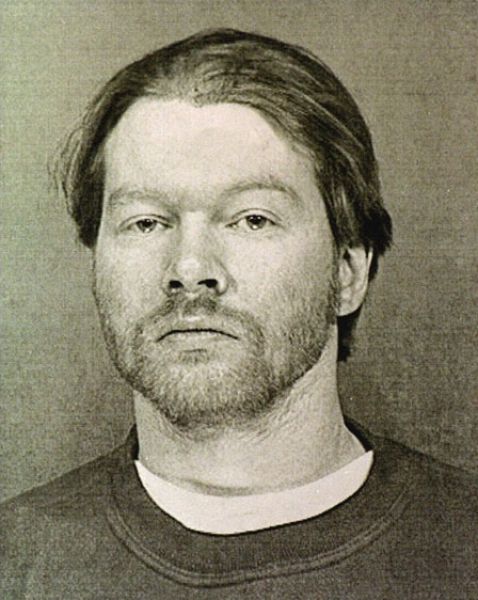 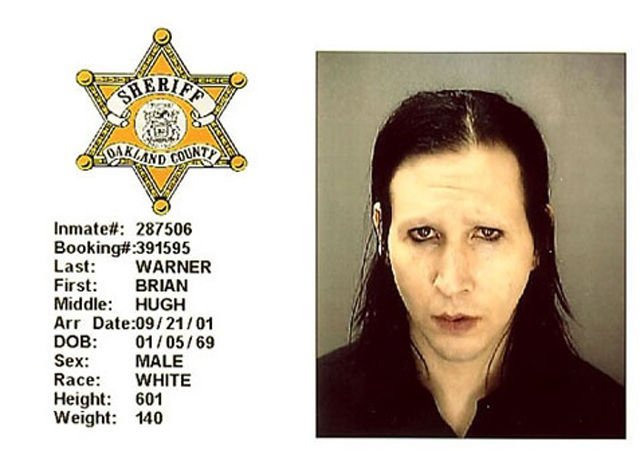 Brian Hugh Warner (aka Marilyn Manson) was charged with criminal sexual conduct after doing the grind on the head of a security guard during a July 2001 concert in suburban Detroit. 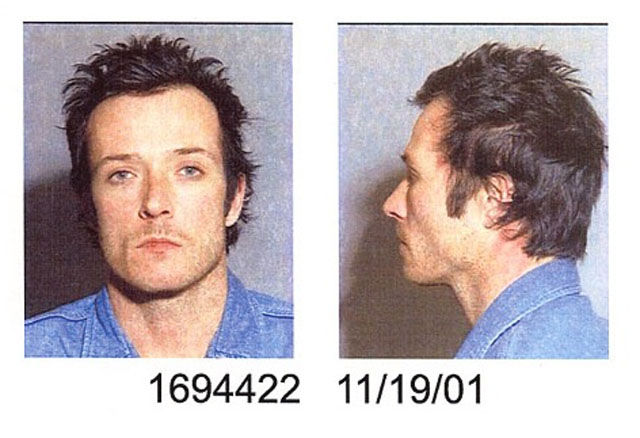 The lead singer of Stone Temple Pilots and Velvet Revolver, Scott Weiland, was arrested in November 2001 and charged with battering his wife.

Peanut 10 year s ago
Billie Holiday...best blues singer ever. There will never be another quite like her.
Reply
1

gigantes 10 year s ago
and scott weiland... there's a scott weiland hanging out next to every dumpster, trailer and liquor store in the country.
Reply
0

GOODSTUFF4U 10 year s ago
I can relate
Reply
0

orendadude 10 year s ago
Lot of talent in this post.
Reply
-1

Meadow 10 year s ago
Good point. I hadn't thohgut about it quite that way. :)
Reply
0

PatriotsFan 10 year s ago
You are the mother of two boys iacrrceanted for armed robbery, how are you even able to keep your assembly seat? Oh, most of your constituents also have relatives in jail. So, instead of your raising children that are criminals speaking to your lack of shame you where it like a badge of honor.You want to know what is wrong with NJ? there it is in a nutshell.
Reply
0

Manik 10 year s ago
Fred, what is the story with this last post by Willy Balsh!!!! It sounds like Willy Balsh (Paul McLaugh) may be a very eongdraus person! It just stopped being funny when he hints at someone dying at one of these bars!!! We can clearly see he is enraged by this campaign but that sounds too scary!!! Have someone please talk to him!
Reply