Historic Photographs Which Are Known to be Altered (13 pics)

Here is the set of famous photographs from the past which underwent serious editing back in time when Photoshop notion was non-existent. 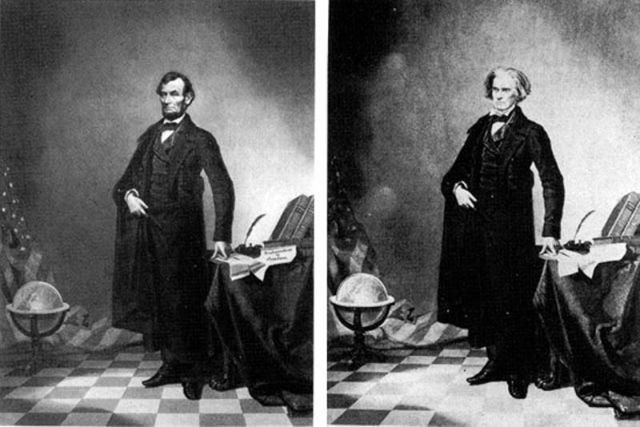 This iconic portrait of U.S President Abraham Lincoln is actually a composite of Lincoln’s head and the Southern politician John Calhoun’s body.

General Ulysses. S. Grant on a Horse in front of Troops, circa 1864 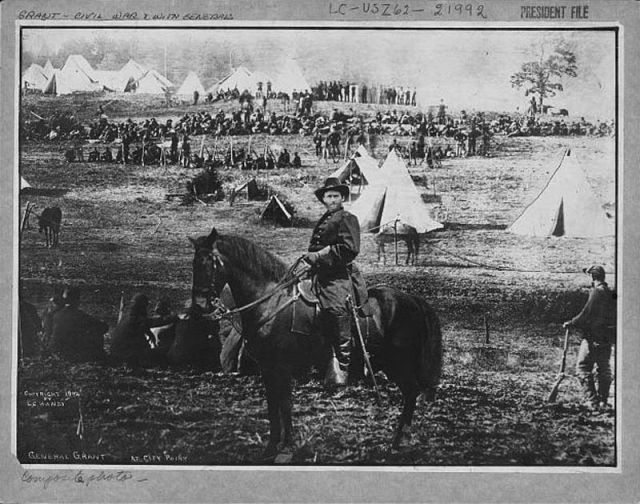 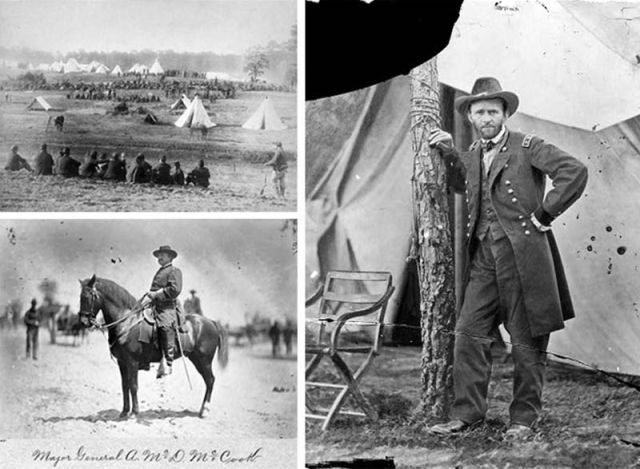 Researchers at the Library of Congress uncovered this gem after extensive detective work. The image appears to show General Ulsses S. Grant in front of his troops at City Point, Virginia during the American Civil War. Investigation now shows the image to be made of three separate prints: (1) the head is taken from a portrait of Grant; (2) the horse and body are those of Marjo General Alexander M. Cook; and (3) the background is of Confederate prisoners captured at the battle of Fisher’s Hill, Virginia.

General Francis P. Blair Added to Photograph of General Sherman Posing with his Generals, circa 1865 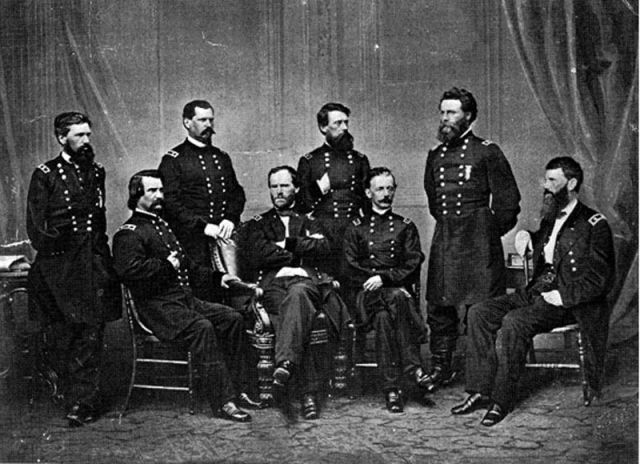 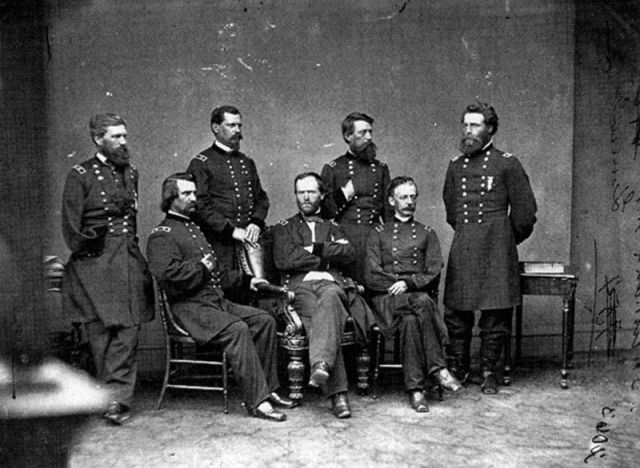 In this famous photograph taken by Matthew Brady, General Sherman is seen posing with his generals. General Francis P. Blair (standing far right) was added to the photograph as he was not in attendance for that specific shot. His image was taken from the second photograph shown, which was taken during the same sitting.

Stalin Airbrushes Out His Enemies, circa 1930

Stalin was notorious for routinely airbrushing his enemies out of photographs. As people fell out of favor with Stalin, so to did their photographic identity. In this image we see a comissar removed after falling out of Stalin’s good graces. 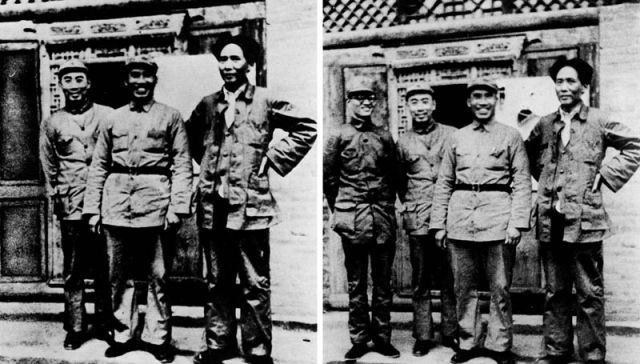 Just like Stalin, Mao Tse-tung was known for removing people after they fell out of favor. In this image we see Po Ku removed for just that.

Not to be outdone by Stalin and Mao, Hitler also liked to tamper. In this doctored photograph we see Joseph Goebbels removed, though it is unclear why Goebbels fell out of favor with Hitler. 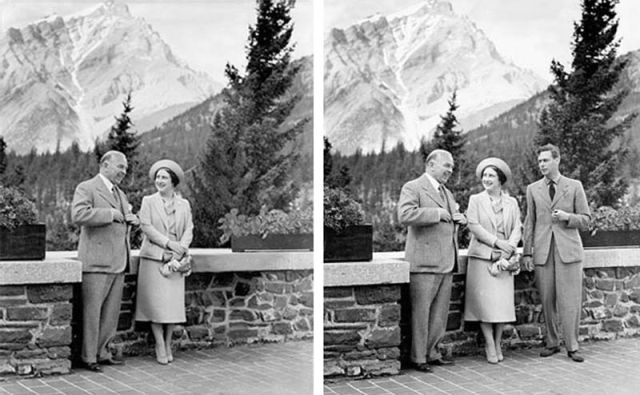 Prime Minster of Canada, William Lyon Mackenzie, removed King George VI from the original photograph with the PM alongside Queen Elizabeth. The photograph was used on an election poster for the Prime Minister, so the theory is that an image of just Mackenzie with the Queen put him in a more powerful light.

Benito Mussolini had the horse handler removed from the original photograph to make himself look more epic and heroic in this iconic capture.

The editor-in-chief of Russian Magazine Ogoniok, removed a soldier’s watch as they raised the soviet flag atop the German Reichstag building during WWII. The reason? If you look closely, the soldier has a watch on his other hand as well. This suggests that ‘looting’ may have occurred before this photo was taken. 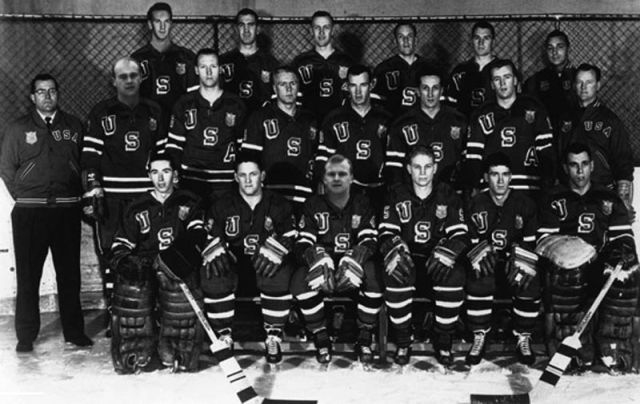 In this rather obvious tampering, the faces of Bill Cleary (front row, third from left), Bob Cleary (middle row, far left), and John Mayasich (top row far left), are superimposed onto the bodies of Bob Dupuis, Larry Alm and Herb Brooks. It’s unclear why those players were selected as ‘replacements’. The US Olympic Hockey team defeated the Soviet Union and Czechoslovakia to win its first Olympic Gold Medal in Hockey.

On April 12th, 1961, a Russian team of cosmonauts led by Yuri Gagarin were the first humans to complete an orbit of Earth. One of the cosmonauts, Grigoriy Nelyubov, was removed from a photo of the team taken after their journey. Nelyubov had been expelled from the program for misbehavior.

Old Geezer 10 year s ago
Goebbels was in the dog house because he was found to be cheating on his wife and she had complained to Hitler.
Reply
0

Tarzan 10 year s ago
they used PS at that time too..
Reply
0