Paradoxes to Drive You Crazy (5 pics)

Once you read these paradoxes you will enter a mental world of hurt, but if you figure them out you can brag to friends about your brain size. 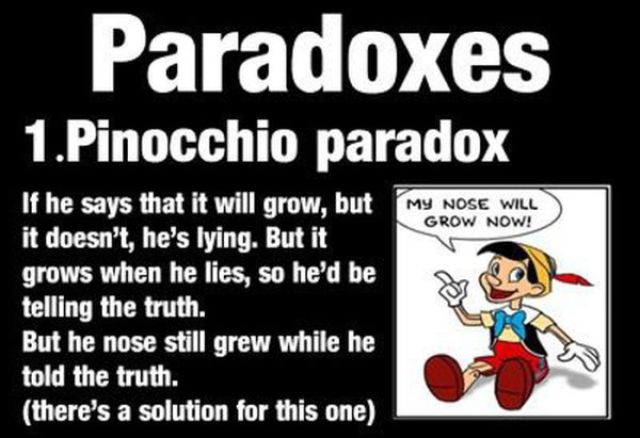 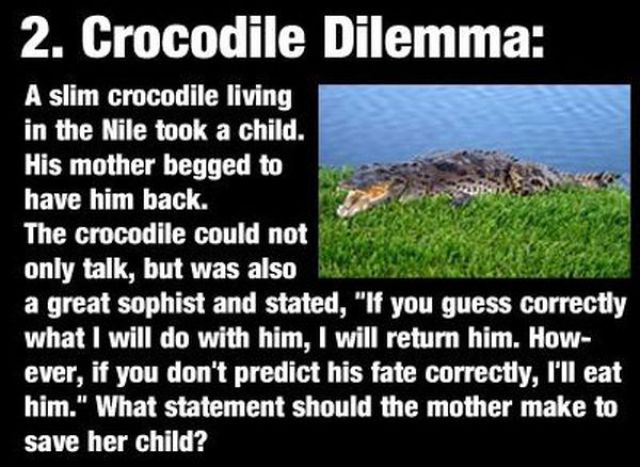 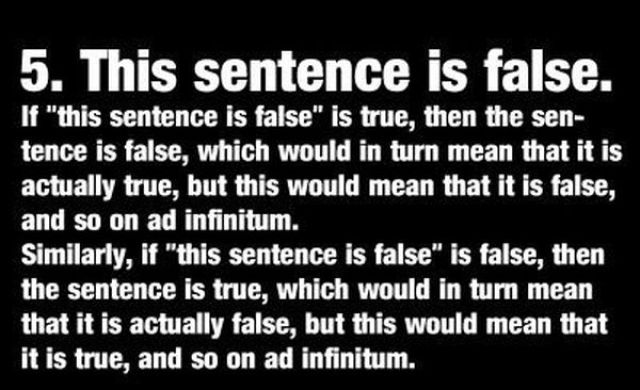 shd 9 year s ago
1. there is no statement about what if he telling the true.
His nose grow when he lies, and also grows when he tells the true.

2. She have to say: you will give him back to me. Since that whats happens if
she can predict the fate correctly.

3. There is no condition that said she killed her own grandmother after her mother were born.

5. so the sentence could be either true of false. It does not have a binary logical statement.
just because it is exist it does not mean we can make statements about it.
So existence =/ logical value
Reply
2

Life 9 year s ago
are you really that dumb ?
Reply
0

Jellis 9 year s ago
Ive dealt with #1 before, cant quite remember what the solution was. I think that basically the fact that his nose will grow when he lies, and saying his nose will grow counts as both lying and telling the truth, it negates the effects. You could also go with the argument that when talking about the curse itself, there are no effects.

For number 4, the work around is to say no in another language, there for not actually saying "no".
Reply
0

Neko 9 year s ago
They look like variations of the paradox of Epimenides the Cretan: self-referential logical contradictions.

There was a Star Trek episode (I, Mudd) that employed such constructions: Spock drove two identical automata nuts by asserting that he loved one, yet hated the other.

Also, Kirk, in an attempt to escape the androids, tells Norman, the central controlling unit, that Mudd is a liar. Mudd then says that everything he (Mudd) says is a lie. But if Mudd is a liar, then everything he says is a lie, but it can't be - because the statement he made about being a liar is true - but if the statement he made is a lie, then Mudd is telling the truth - but be can't be because he is a liar - ad infinitum. Norman apparently lacked a meta-language with which to consider the paradox, and the resulting logical conundrum resulted in a feedback loop, frying Norman's circuits.
Reply
0

gigantes 9 year s ago
kirk did pretty much the same thing to every computer he faced off with. the writers had a different conception of computers back then.
Reply
0

WhySoBreezy 8 year s ago
For #4, you need do answer the question in your mind, then say the answer. It does not tell you to answer verbally. So, will the next word you say be 'no'? (think 'yes') And then say "no".
Reply