If you are a pet owner then you probably have already seen glimpses of how much animals feel, but these amazing stories will show you the depth of their character and souls.

Koko the gorilla responds to a sad moment in her favorite film.

The parrot with the moving last words. 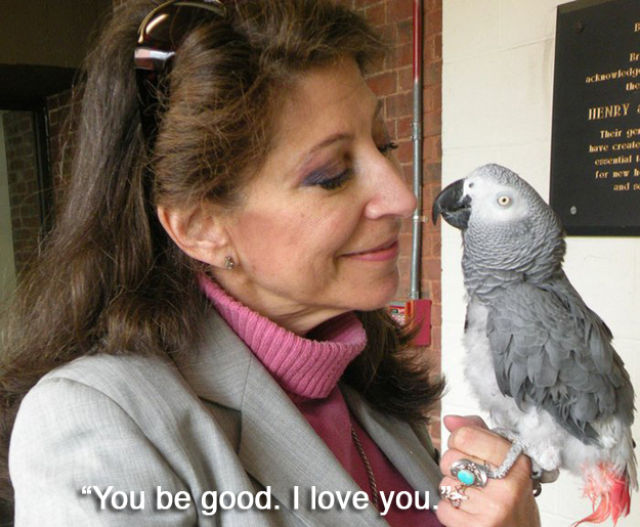 Alex the African gray parrot was able to count and identify colors, and he had a beautiful relationship with this person, Irene Pepperberg. When Alex died in 2007, his last words to her were "You be good. I love you."

The fact that cows have best friends and get stressed when they are separated. 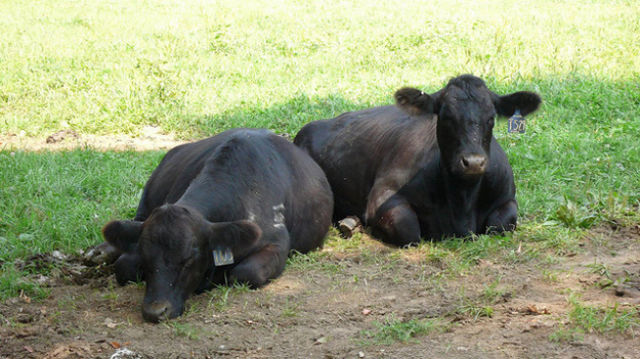 According to scientist Krista McLennan, "When heifers have their preferred partner with them, their stress levels in terms of their heart rates are reduced compared with if they were with a random individual."

The two guide dogs who led their owners down 70 floors in the World Trade Center before the towers collapsed on September 11. 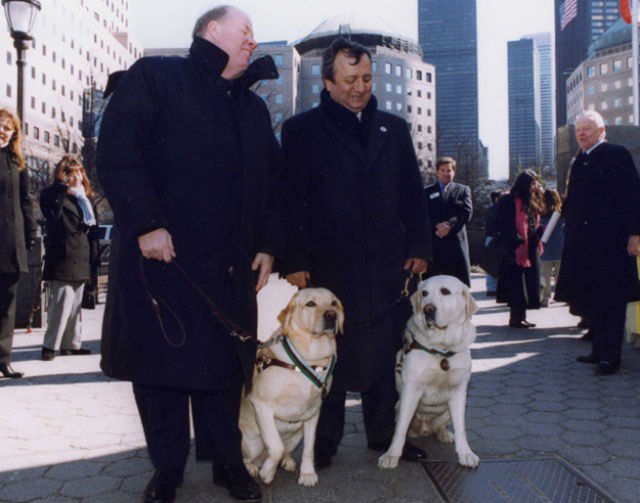 Guide dogs Salty and Roselle were awarded a joint Dickin Medal "For remaining loyally at the side of their blind owners, courageously leading them down more than 70 floors of the World Trade Center and to a place of safety following the terrorist attack on New York on 11 September 2001."

The Jack Russell Terrier who gave his life to rescue five children from wild dogs. 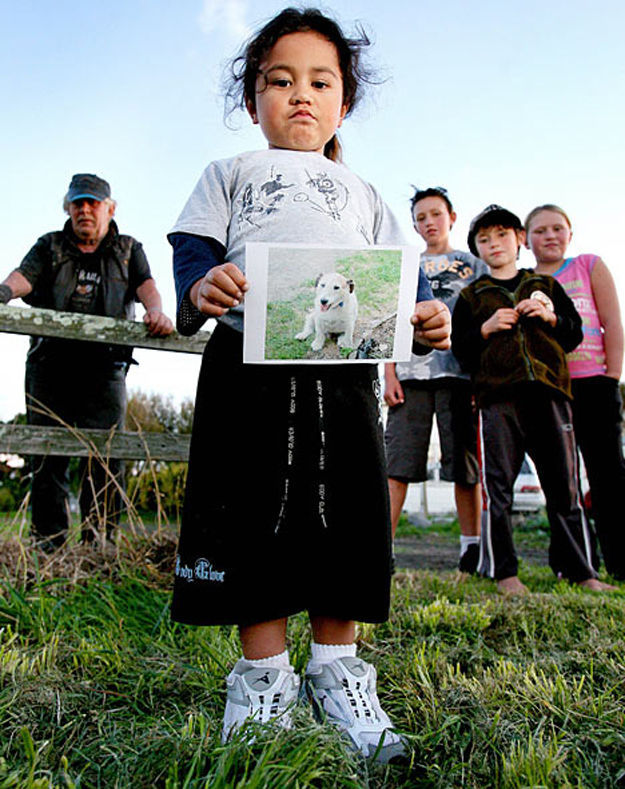 In 2007, five children were playing with George when they were attacked by pit bulls. "George tried to protect us by barking and rushing at them," said one of the children about the attack, "but they started to bite him - one on the head and the other on the back." His heroic intervention saved the children, though he later died from his injuries. George was posthumously awarded a medal for bravery.

The beluga whale who saved a free diver who had cramped up 20 feet below the surface. 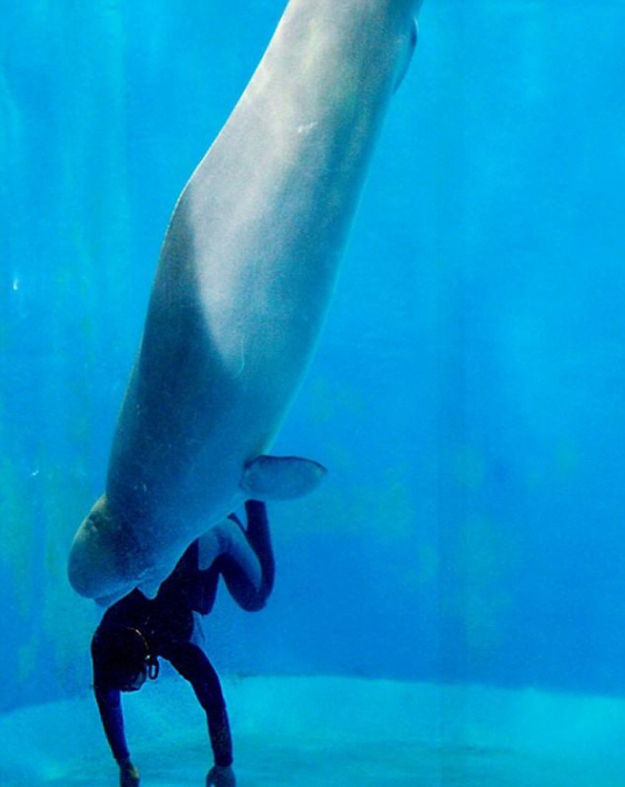 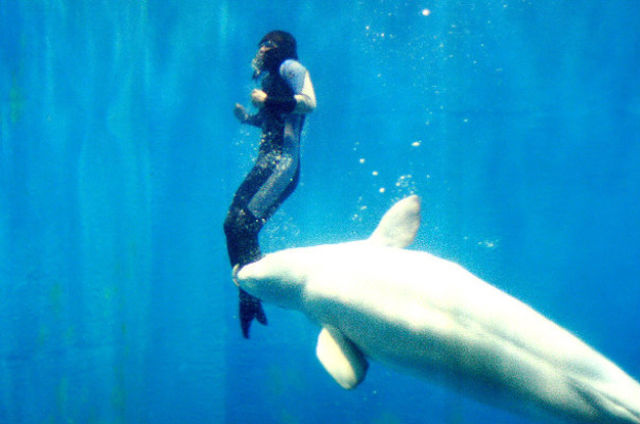 When free-diver Yang Yun tried to return from the bottom of an arctic pool, she found that her legs had cramped up and she couldn't move.

"I began to choke and sank even lower and I thought that was it for me – I was dead. Until I felt this incredible force under me driving me to the surface."

A Beluga whale named Mila had seen what was happening and sprang into action, guiding Yun safely back to the top of the pool.

The cat who can sense when someone is about to die. 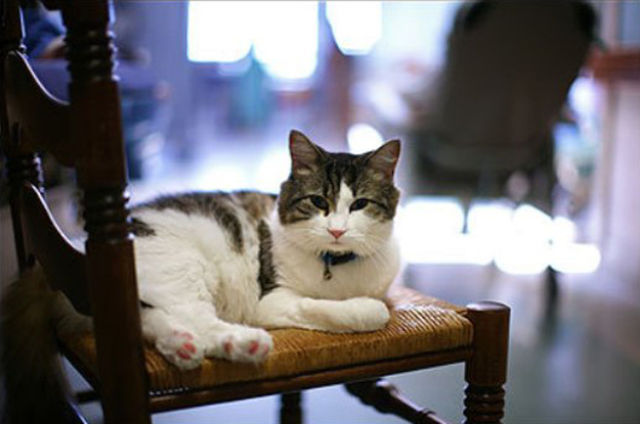 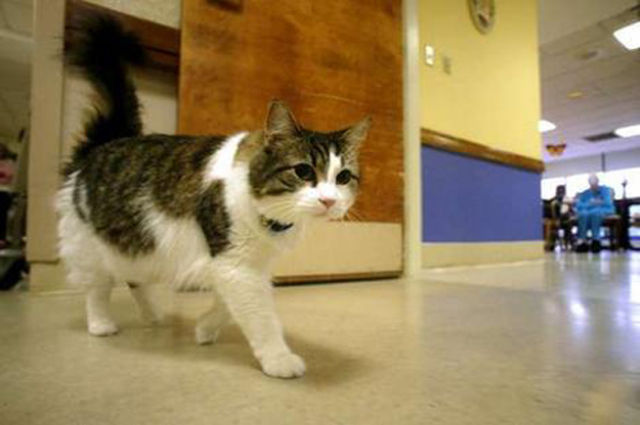 Oscar could always sense when one of the residents at the nursing home where he lived was near death and would sit quietly on their bed during their last moments.

One relative of two sisters who died in the nursing home said of Oscar's vigil, "Oscar's presence gave a sense of completion and contentment. Both women loved pets. Oscar brought a special serenity to the room. What's more peaceful than a purring cat? What sound more beautiful to fill one's ears when leaving this life?" 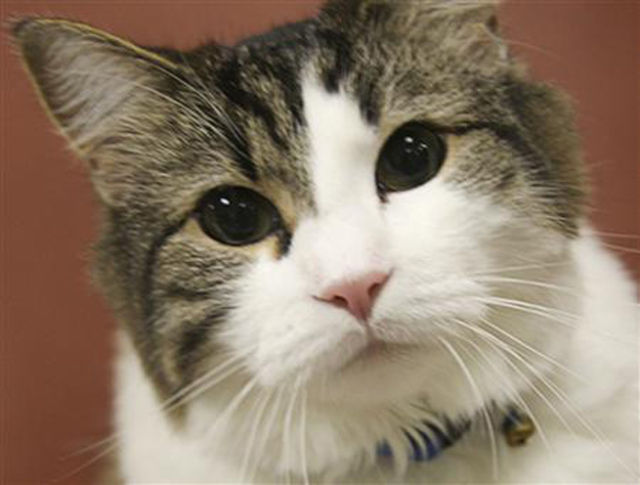 The Staffordshire bull terrier who protected her owner from a machete gang. 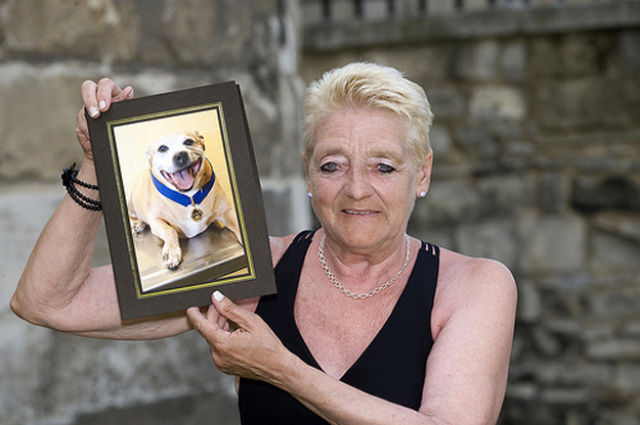 Patricia Adshead was making tea when three men wearing masks and wielding machetes broke into her home. Adshead's ex-husband rushed to help, but one of the assailants sliced through his hand with a machete.

“I was trapped in the kitchen with Oi and one of the men. He raised the machete over my head," she said.

"Oi jumped up and bit his hand. He brought the machete down on her head but she still chased him out of the house. If she hadn’t gone for him I would have been dead. She saved my life.”

The gorilla who remembered his old friend.

The recent discovery that fish use tools to perform tasks. 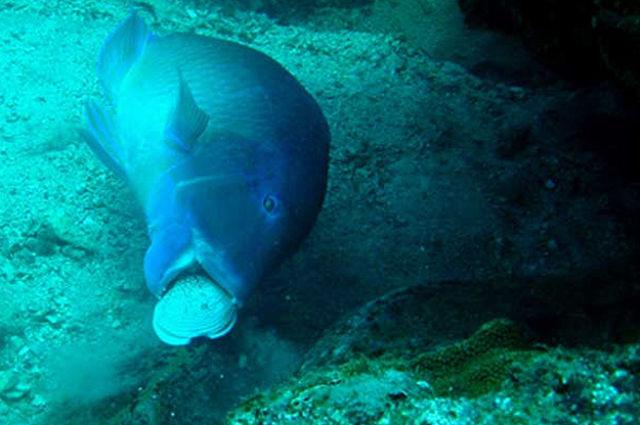 In 2011, a professional diver captured this amazing image of a fish smashing a clam against a rock to get at its innards, proving that fish have vastly superior capacities than most people believe.

The German Shepherd who has become a seeing eye dog for a blind spaniel. 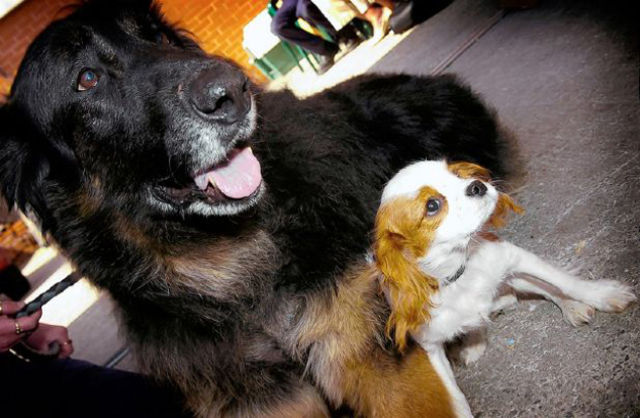 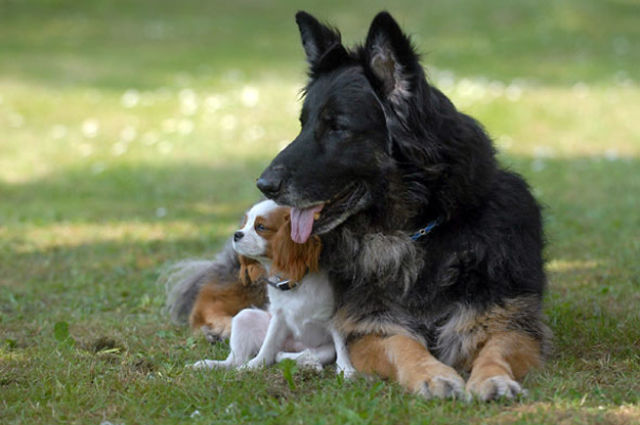 When Ellie, a blind spaniel, was adopted by shelter manager Jean Spencer, she never expected that her other dog, Leo, would choose to become her very own seeing-eye dog. "I take them for walks in the park and Leo guides Ellie around," says Spencer. "He is so protective and herds the more boisterous dogs away from her."

The abused circus elephants who were reunited at an elephant sanctuary after 25 years apart.

The amazing story of Christian the lion.

The chimps who grieved for their dead friend. 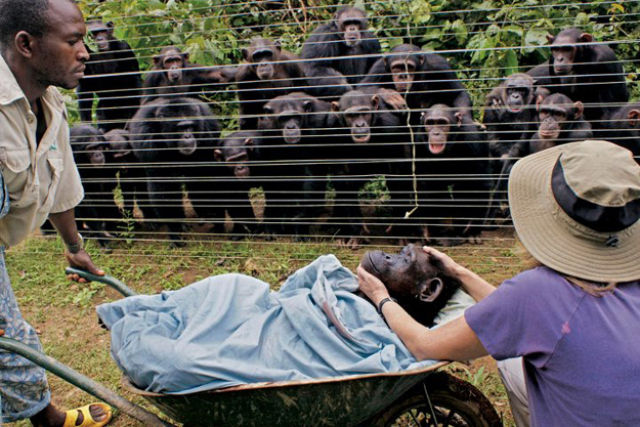 At a Chimpanzee Rescue Center in Cameroon, a chimp named Dorothy died of heart failure. What happened next was amazing: Her fellow chimps hugged each other in solidarity and solemnly watched as their friend was laid to rest.

Antypaladyn 9 year s ago
Damn you ninjas and your onions!
Reply
2

mm 9 year s ago
I have known for a long time that there's no real difference between humans and animals. Only our IQ makes us top predators. Even though I like animals very much, I'm not vegetarian since our digestive system is omnivorous and it would harm me if I didn't eat animal meat. Respect your food.
Reply
3

Antypaladyn 9 year s ago
@mm
Similar situation here. I can go without meat but I'm not vegetarian. My mother is and it's nice that she doesn't impose her views on us. My view is "protect animals as long as they're alive and fight cruel slaughtering [like cooking pigs in boiling water alive] but if they're already dead meat there's not much you can do, only respect that they died so you can survive. My family never kills fish for Christmas, since we consider it a holiday of mercy. I have a respect for life and even catch insects and let them out alive outside of my home.
Reply
-1

i am for respect of animals.. but don't see them as humans! see humans as animals. (and yes that's completely different)
and above all else.. get your facts straight.
Reply
0

phyre.storm.1 8 year s ago
Actually, most people in first-world countries where a large variety of foods are available can live just fine without meat. It just takes a little research and possibly vitamin supplements (which can also be vegetarian.)

I've been a vegetarian for 13 years and am in excellent health.
Reply
6

Glasofruix 9 year s ago
Right souls, i call that intelligence and emotion.
Reply
1

Met 9 year s ago
Animals don't have souls. And neither do you.
Reply
0

Fishermen 9 year s ago
i love you for this comment!
Reply
0

izzimyfizzi 9 year s ago
"For remaining loyally at the side of their blind owners, courageously leading them "

They didn't have much of a choice now, did they?!
Reply
0

Antypaladyn 9 year s ago
@izzimyfizzi
Dogs are scared of fireworks. They could as well hide under the desks, scared of the noise and fire.
Reply
-1

izzimyfizzi 9 year s ago
@Antypaladyn
Uh, so they made a decisive decision to walk their owners to safety...righto!

A dog would take the 1st opportunity to get out of there... the fact their owners survived, is because they were ATTACHED to the fucking dogs!
Reply
0

phyre.storm.1 8 year s ago
Those are both pretty big dogs. They could have yanked their leashes out of their people's hands and made a run for it.
Reply
0

Peanut 9 year s ago
Wrong, Indiana Jones. Humanity, as a whole, lacks morals. We murder, rape, torture, steal, prevaricate, and cheat. There is no level of depravity that we won't sink to. Our arrogance and greed knows no bounds. The planet is rapidly reaching the point of no return because of our unchecked breeding and stupidity. People won't ever change.

Other species face far more adversities than humans do. For the most part, we create our own. Other animals suffer horribly because of us.

We aren't the most superior, we are just the biggest parasites on Earth.

This is absolutely one of the best posts ever. Thanks for sharing.
Reply