Picture of the Day

This is the story of the 98 year old beggar Dobri of Bailovo village in Bulgaria who's become the most generous benefactor of the largest Cathedral in Eastern Europe... In addition a friend of mine's mother works at an orphanage and she told me that this noble old man paid the orphanage's power bills becuase they were too high and the power was going to be cut and children left in the cold a few months ago. Who is he? 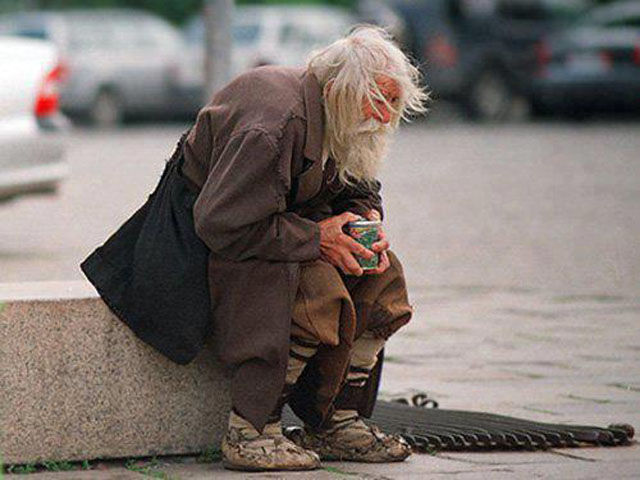 Dressed in his home-spun clothes and ancient leather shoes worn in winter and summer he could often be seen standing outside the church St. Alexander Nevsky in Sofia somewhat detached and silently clutching his tin-box for coins. I see him every day I pass by. Grandpa Dobri holds the key to people's hearts. Softened at his very appearance, we all rush to put a coin in the hands of the elderly man. Apparently he gets up early every day and walks the 10 kilometre route from his village Bailovo to Sofia. He enjoys speaking to the busy passers-by and kisses the hand of everyone who stops for a chat.

To people in Sofia he's been known for many years simply as Grandpa Dobri - the beggar.

In 2010 during filming a documentary about the Nevsky Cathedral a journalist working for the Bulgarian national TV found in the church's archives a shocking discovery - the most generous private donation that the church ever received was by no other than the old beggar - Granpa Dobri. It was an astounding EUR 40,000. The 98-year-old Bailovo saint has not touched even a single penny from the money we all thought he lived off. He apparently lives only off his 100 Euro a month retirement and what people kindly leave him - mainly fruit and bread...

Now, having chosen a life of a hermit, he tours the churches on public holidays, raising money for temples and monasteries. 10 years ago, when he was "still young"...he says, he used to walk the distance from Sofia to Bailovo and other places - now he travels around the city by bus...

Most likely Dobri's good deeds will remain a secret. People say he's also helped numerous needy people living in shelters. Yet, he doesn't want to talk about it.. When you GIVE don't do it for the PR or waiting to get something back it like grandpa Dobri - from the heart...I believe that this is the reason for his unbelievable energy and life he's got at his age :)

Mr. Ree 9 year s ago
The article is not 100% accurate. Not all the money he receives goes to the church. He still has 8 more payments left on his Lexus and he gets refills on his Viagra prescription once a month so that he can keep up with the 4 prostitutes he hires each weekend.
Other than that, he donates his money to the church.

Cancamuso 9 year s ago
98 years old, bitch. You're not going to make it through the seventies.

gigantes 9 year s ago
you're overthinking it, cancamuso. mr. ree was merely paying tribute in his own way.

if that awesome old man was actually bothered by comments like that, he never would have made it to 98. he's prolly tougher and more placid than all of us combined.
Reply