The M2-F1 aircraft in towed flight. It was the first of five designs of 'lifting body' planes where aerodynamic lift is derived from the shape of the fuselage rather than from wings. The M2-F1 was built in 1963 and towed by a larger airplane in the air before being released to glide back to the ground. 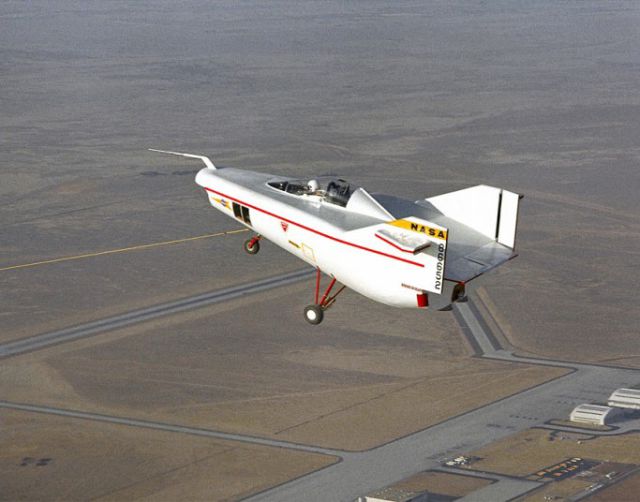 The Avrocar saucer shaped aircraft which was a conceptual vertical take off and landing (VTOL) aircraft built by Canadian company Avro in 1958 for the US Air Force. It was able to hover a few feet off the ground from the thrust generated by a centrally located 'turborotor'. When flown without tethers the Avrocar was unstable and could only reach a top speed of only 35 mph. The engines created excessive heat and noise. The project was cancelled in 1961. 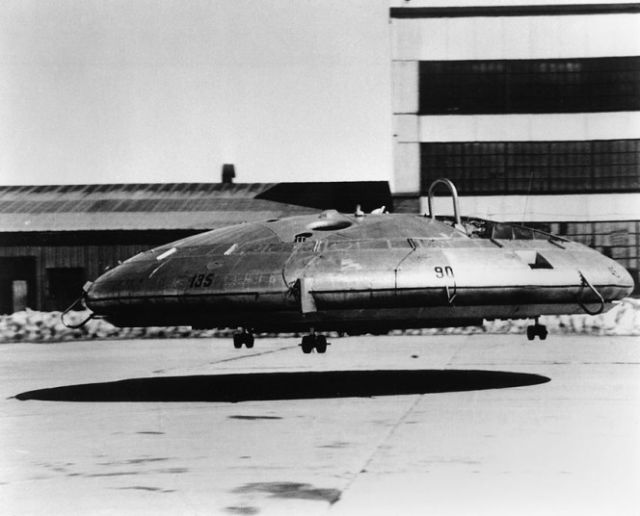 The Ryan X-13 Vertijet, built by Ryan Aeronautical in 1955 for the US Air Force, would take off vertically, fly horizontally and land vertically 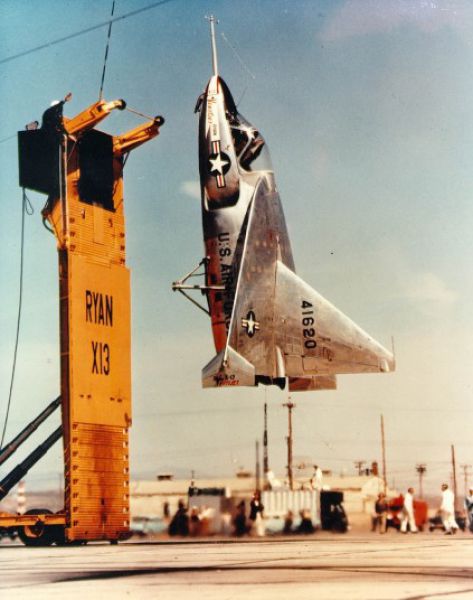 The Vought V-173 was built for the US Navy. It was conceived in 1942 so it's a bit early for this 1950s aviation roundup but we liked the nickname given to this semi-circular all-wing design: the flying pancake. The low-aspect ratio wing design offered better drag resistance at the wing tips compared to conventional aircraft with propeller engines mounted mid-wing. The compact design made the V-172 structurally strong, offered high manoeuvrability and could fly at very slow speeds. Despite nearly 190 test flights, the V-173 project ended in 1947. 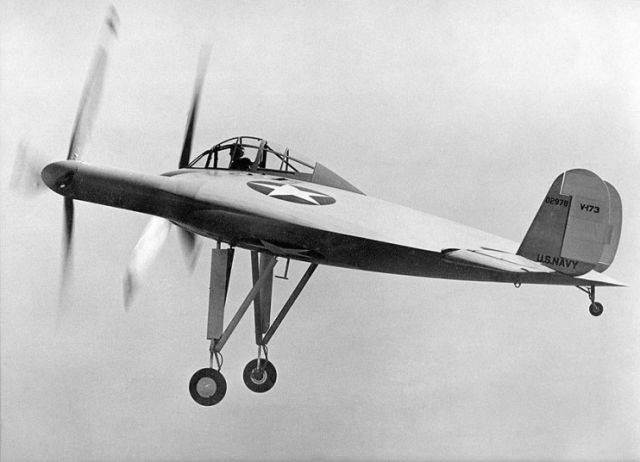 The Douglas X-3 Stiletto experimental jet aircraft built in 1952 for the US Air Force, It featured a narrow fuselage, tiny wings and a long tapered nose making it the sleekest aircraft for its time. The X-3 performed poorly in test flights and never attained its target speed of Mach 2 (twice the speed of sound). Despite this, several features were taken forward to use in future high speed planes. 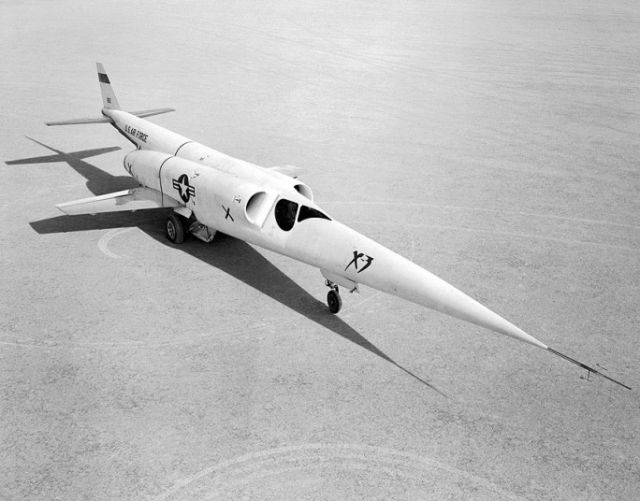 A picture of a Lun-class ground effect vehicle (GEV), or sea skimmer, developed by Russian engineers at the Alexeyev Hydrofoil Design Bureau, was one of the largest sea-planes ever built

Lunar Landing Research Vehicle (LLRV) built in 1963 as part of the Apollo Project to land on the moon. It was a vertical take-off and landing vehicle powered by a single jet engine. The vehicle allowed Apollo astronauts to train for real moon landings. 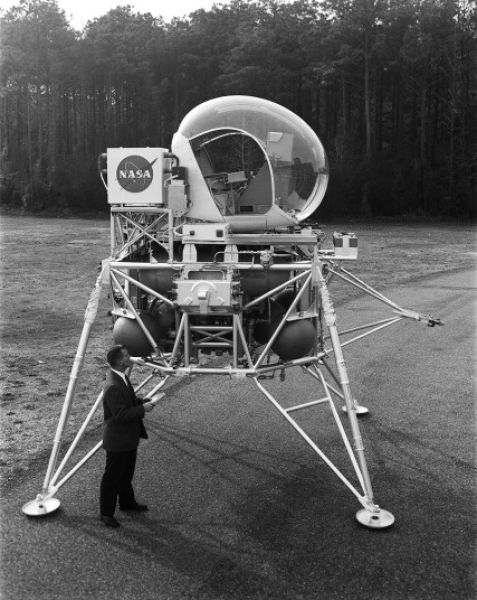 Major Jerauld Gentry standing in front of the HL-10. This was one of a series of experimental space re-entry aircraft known as lifting body designs. Lifting body aircraft had short, bulbous or curved fuselages and featured minimal wings or were wingless. The design increased the aerodynamic capabilities of the aircraft when travelling at speed and the absence of wings meant less heat damage during space re-entry. The HL-10 was built in 1966 and dropped from B-52 planes to test flight manoeuvrability. Despite its success, NASA cancelled the lifting body design in favour of the delta wing during early Space Shuttle development. 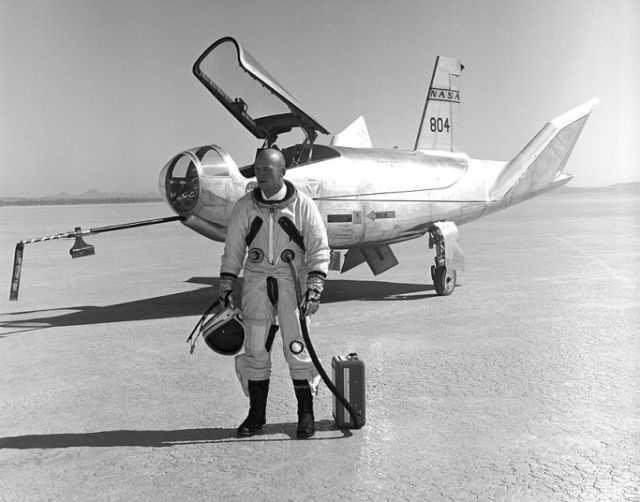 The Super Guppy Turbine (NASA's B377SGT), super-sized cargo plane flown since 1980 and acquired by NASA in 1997, is taking off from Edwards Air Force Base en route to to its home base, Ellington Field, near the Johnson Space Center in Lancaster, California.

The Vertol VZ-2 was a tilt-wing VTOL (vertical take-off and landing) plane. This aircraft first flew on 13 August 1957 and was retired in 1965 in Virginia. The wings are designed to tilt to allow the rotors to lift the aircraft the way they would on a helicopter. Once airborne, the wings tilt back to face forward, as seen here. 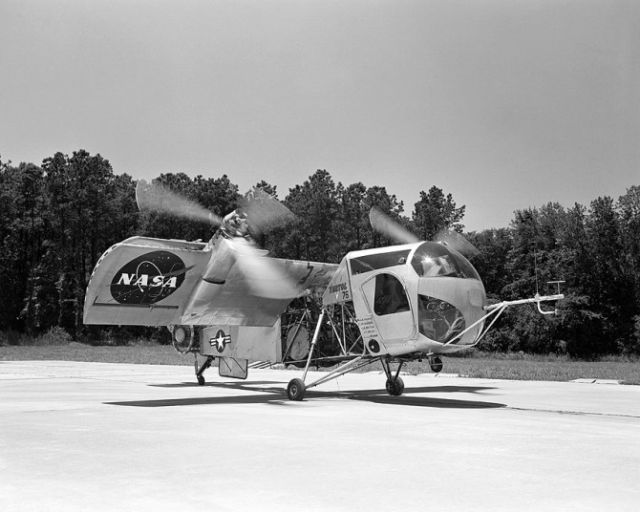 The NASA Hyper III aircraft was built in 1969 as part of the lifting body program. The design increased the aerodynamic capabilities of the aircraft when traveling at speed and the absence of wings meant less heat damage during space re-entry. The Hyper III was underpowered and unmanned. When it was launched from the air it simply glided down under remote control and landed safely. It was not developed any further. 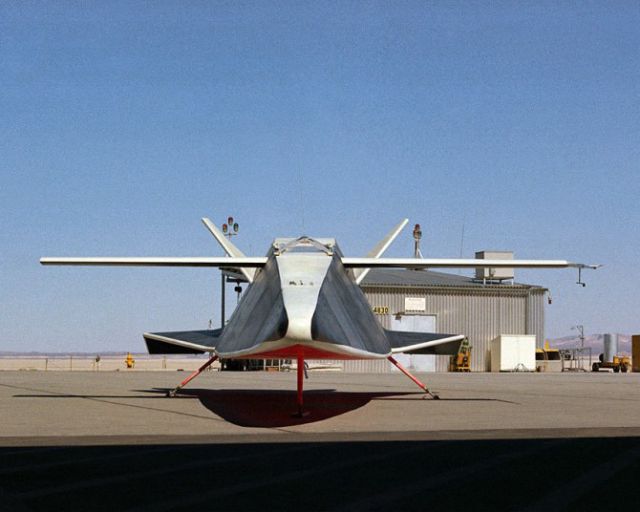 The Russian-built Mil V-12 is the world s largest helicopter, 28 metres in length and 4.4 metres in width and height and pair of rotors were mounted on transverse wings. Two prototypes were built in 1967 and though it never went into full production, the helicopter was able to carry a payload weighing over 40,000 kilograms to altitude. Development ceased in 1974 and both prototypes currently reside in air museums. 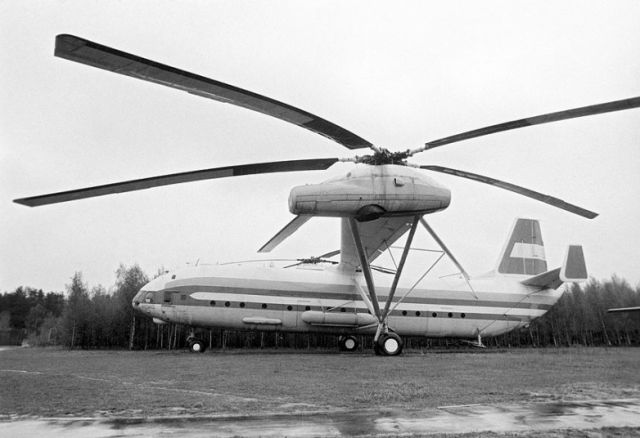 The X-Wing was an experimental hybrid helicopter/fixed wing aircraft built in 1986 by helicopter maker Sikorsky for NASA and the US army, it was based on a modified S-72 Rotor System Research Aircraft (RSRA) which could fly with or without rotor blades. The addition of large x-shaped rotor blades would, in theory, allow the aircraft to take off and land vertically. During flight, the rotor blades could be switched off and act as an additional pair of wings to provide lift when moving forward. Despite being built, it was never flown. 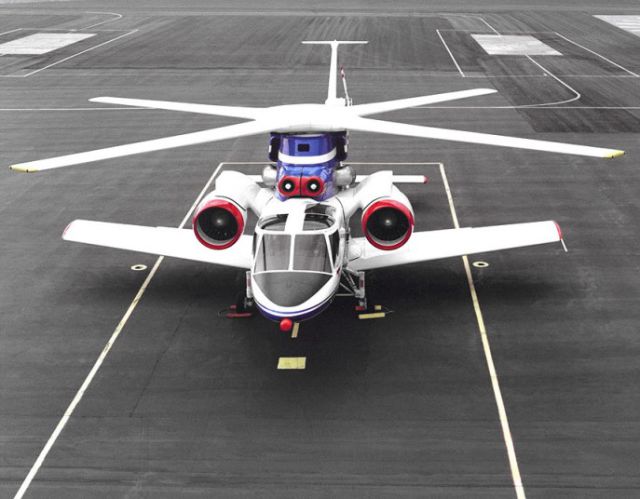 A Russian ground effect aircraft flies low over the water 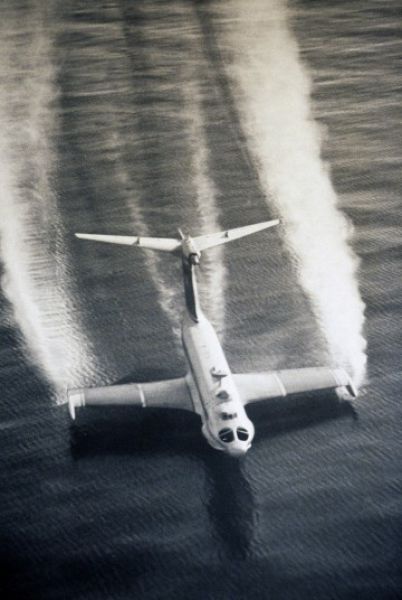 The McDonell Douglas X-36 aircraft, scale model prototype jet aircraft built to test the flying ability of a tail-less aircraft which was built in 1997 and was operated remotely from the ground 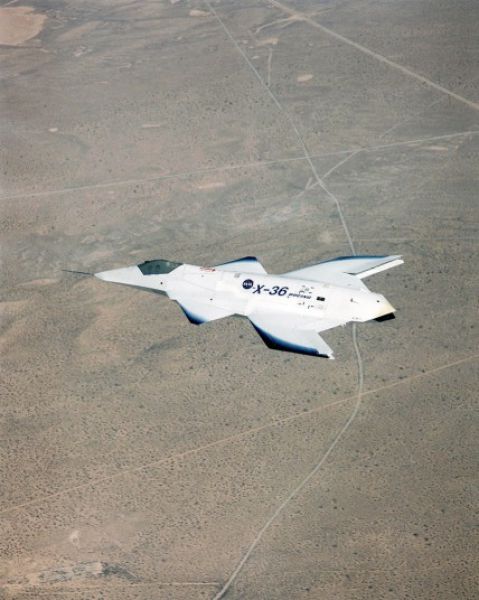 The HiMAT (Highly Maneuverable Aircraft Technology) experimental aircraft built by Rockwell in 1979 for NASA and the US Air Force. It was a scaled down remotely operated aircraft built to explore new technology for future fighter aircraft. The HiMAT aircraft were built using novel composite materials and incorporated closely coupled canards (small winglets), It was capable of withstanding high G-forces. The project ended in 1983. 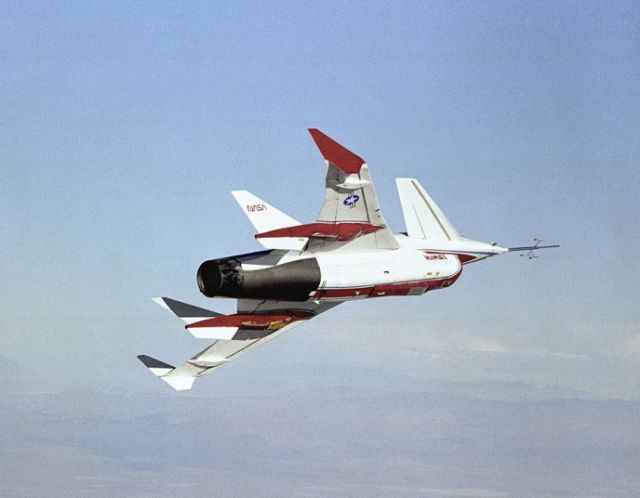 The AD-1 oblique wing aircraft built in 1979 by Ames Industrial for NASA. The AD-1 could pivot its entire wingspan from zero to 60 degrees during flight. Wind tunnel tests on scale models showed that the oblique wing configuration reduced aerodynamic drag at high speeds. This allowed the plane to increase speed and travel longer distances while decreasing fuel consumption. During manned test flights, the AD-1 demonstrated instability at certain wing angles. The project ended in 1982. 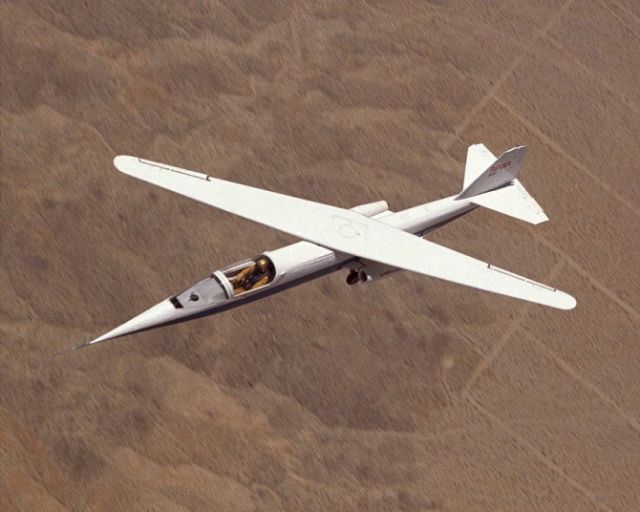 The Northrop XP-79B flying wing aircraft, built in 1945 by Jack Northrop for the US Army. It was designed as a flying wing fighter aircraft powered by two jet engines. Flying wing aircraft lack a defined fuselage and were able to transport a larger volume of cargo and fuel. The shape is also harder to detect by radar. The XP-79B crashed during testing and the project was subsequently cancelled. 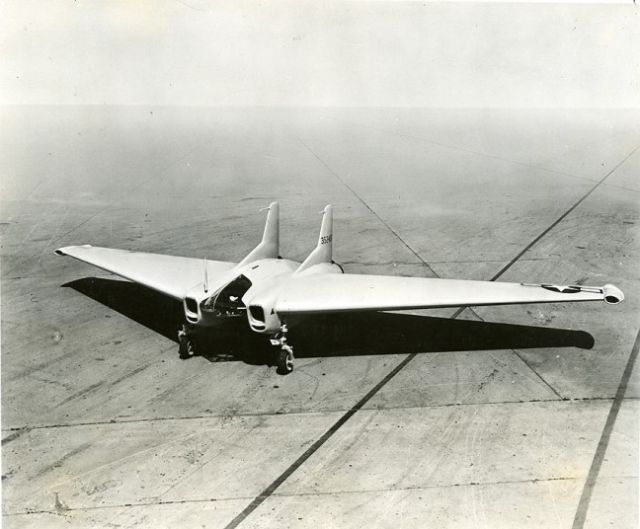 Grumman X-29 experimental aircraft built in 1984 by Grumman for NASA to test the concept of forward sweeping wings. The high lift-to-drag ratio of the wing design provides the plane with enhanced manoeuvrability at supersonic speeds (faster than sound). It is able to turn mid-air quickly and is much less likely to stall at high angles of attack. The main disadvantage of this design was the increased stress load on the wings. This lead the X-29 program to be terminated in 1991. 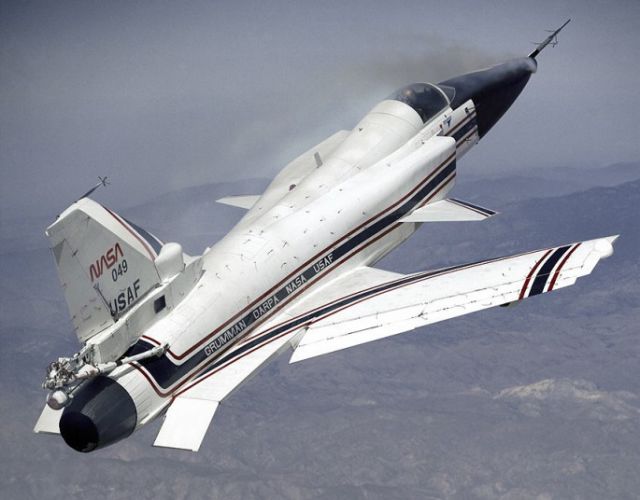 The Su-47 Berkut is an experimental fighter jet built by Russian company Sukhoi in 1997, it features a pair of fixed wings that sweep forwards. The high lift-to-drag ratio of the wing design provides the Su-47 with enhanced manoeuvrability at supersonic speeds (faster than sound). It is able to turn mid-air quickly and is much less likely to stall at high angles of attack. The main disadvantage of this design is the increased stress load on the wings. 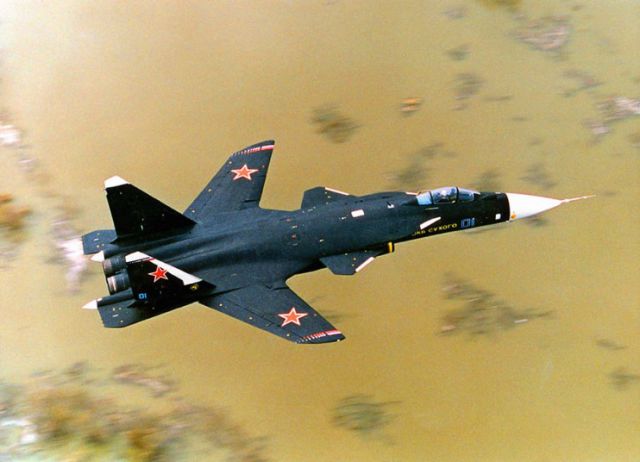 The Lunar Landing Research Vehicle (LLRV) was built by Bell Aerosystems in 1964 as part of the Apollo Project to land on the moon, it was a vertical take-off and landing vehicle powered by a single jet engine. 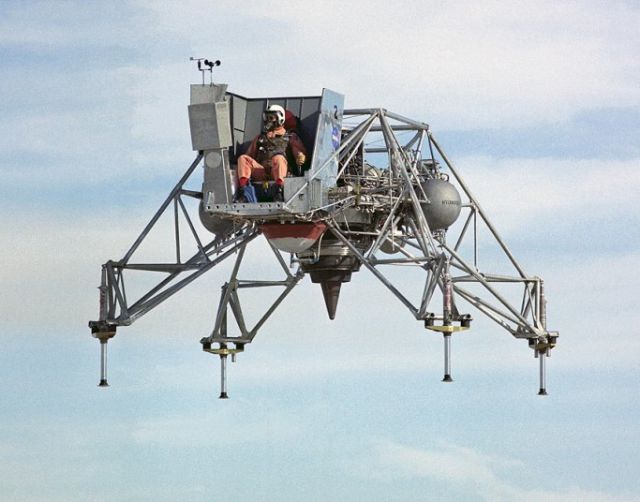 The X-48B Blended Wing Body aircraft model - a cross between a conventional plane and a flying wing design, was based on a need for a multi-role, long-range and high-capacity military transport aircraft. Boeing Phantom Works partnered with NASA and the Air Force Research Laboratory to study the structural, aerodynamic and operational advantages of this advanced aircraft concept at NASA's Dryden Flight Research in California. 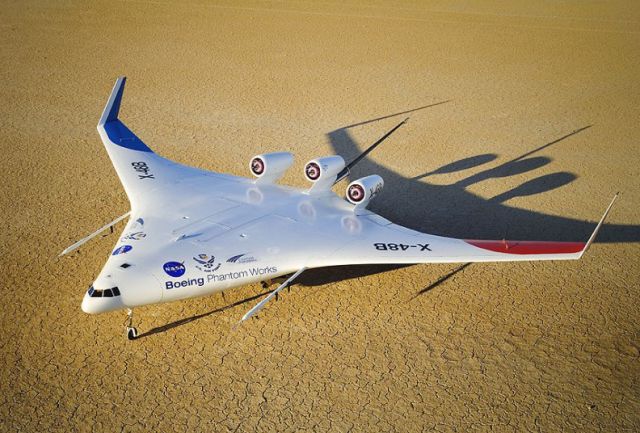 LTV XC-142 tiltwing experimental aircraft made by Ling-Temco-Vought. The LTV XC-142 was built in 1964 for the US army who were interested in a short take-off and landing aircraft that could carry huge cargo and travel long distances. Tiltwing aircraft have wings that can rotate vertically or horizontally. When rotated vertically, the engine propellers allow the aircraft to take off and land vertically much like a helicopter. Once in the air, the wings rotate to point horizontally and allow it to fly like a conventional airplane. It was able to transport heavy cargo but proved unstable at certain manoeuvres resulting in a cancellation of the project in 1966. NASA continued to test the plane until 1970. 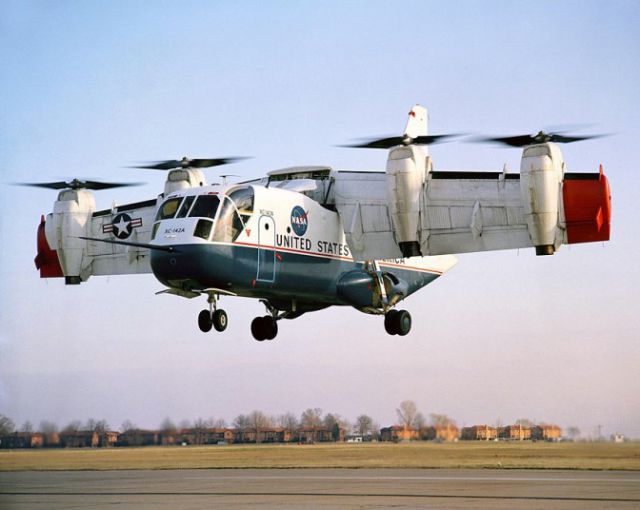 Fenrisulven 6 year s ago
Cool!
#22 Is this one the only one still under testing?
Never underestimate the power of large crowds, of stupid people.
Reply