Magical and Amazingly Beautiful Places in the World (27 pics) The rainbow formation is the result of red sandstone and mineral deposits being laid down for over 24 million years, according to the Telegraph.

The swing at the “End of the World” in Baños, Ecuador 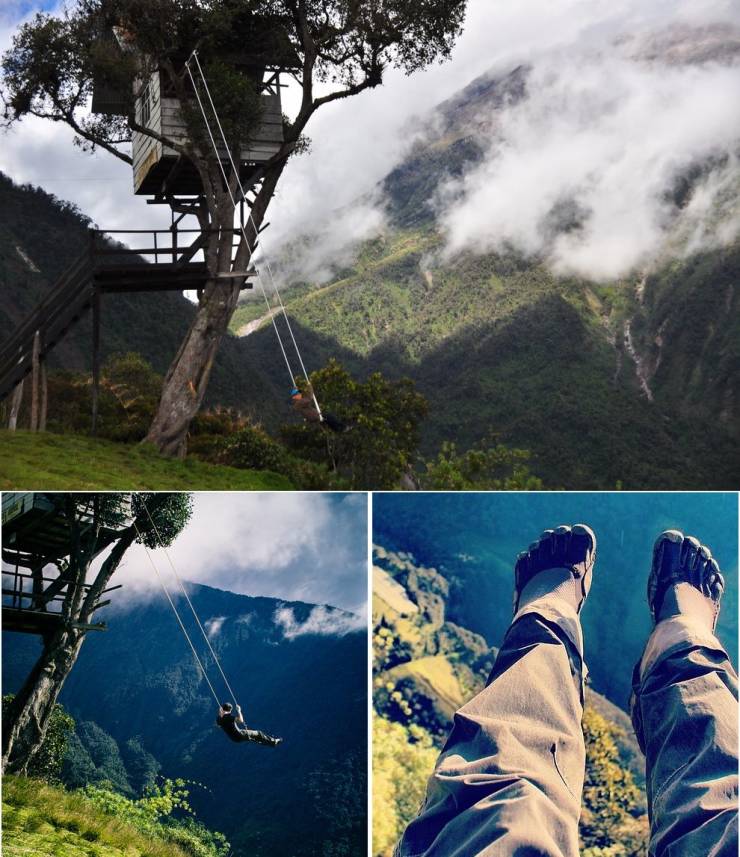 At the edge of Ecuador sits a rickety tree house (casa del árbol) overlooking an active volcano in the near distance. With it comes a swing with no harnesses, inviting only the bravest of risk-takers to experience a killer view.

The Great Blue Hole in Belize 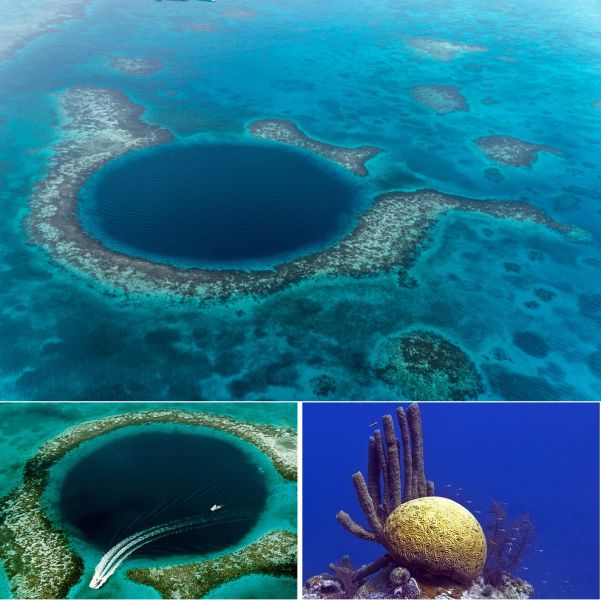 The Great Blue Hole is a submarine sinkhole off the coast of Belize. It’s one of the top scuba diving sites in the world and the water is 407 feet deep.

Tulip fields in the Netherlands 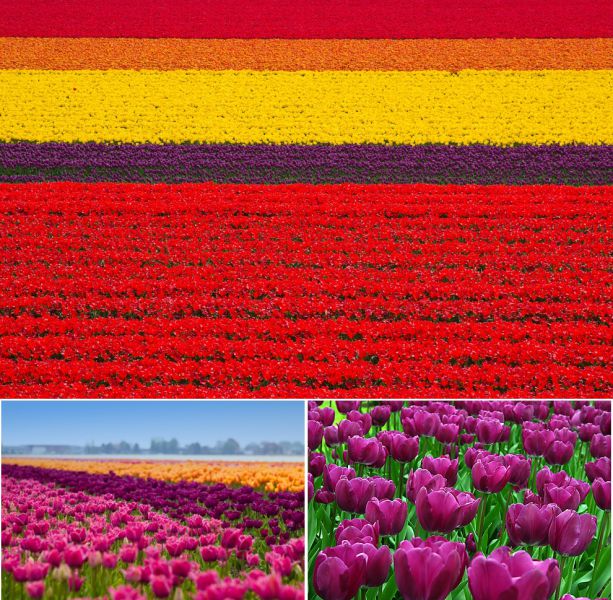 Many people often mistake Keukenhof, also known as the Garden of Europe, as the designated space of the tulip fields. However, these majestic fields are located just outside the garden and are mostly privately owned. 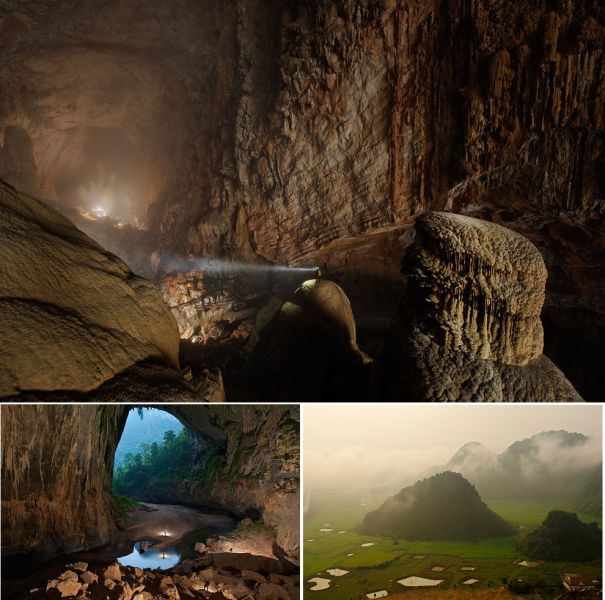 Son Doong is the world’s largest cave, created 2–5 million years ago. A half-mile block of 40-story buildings could fit inside it! The park is in full bloom during spring and tourists often visit to see 4.5 million “baby blue-eyes” flowers blossom. 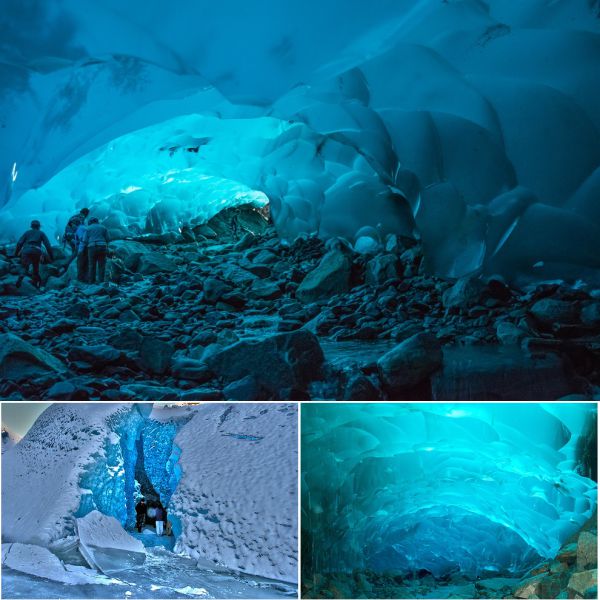 The cave lies beneath the Mendenhall Glacier and it melts as you walk through it.

Picture #8 was removed by admin 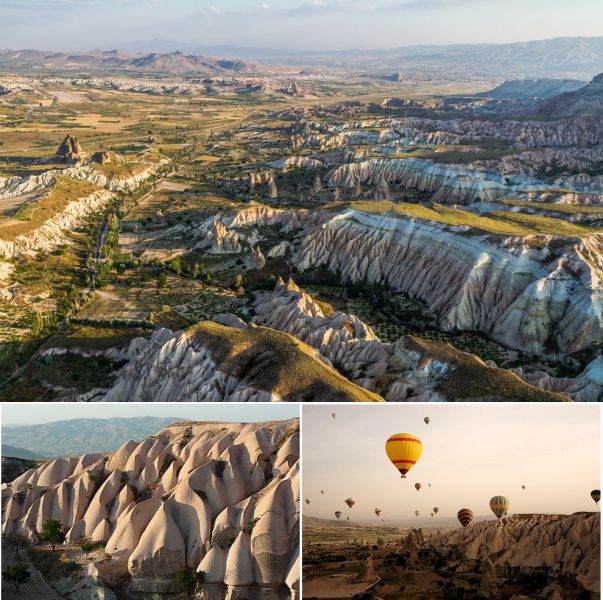 The area has become a popular tourist area and a favorite spot for hot air ballooning.

Sea of Stars on Vaadhoo Island in the Maldives 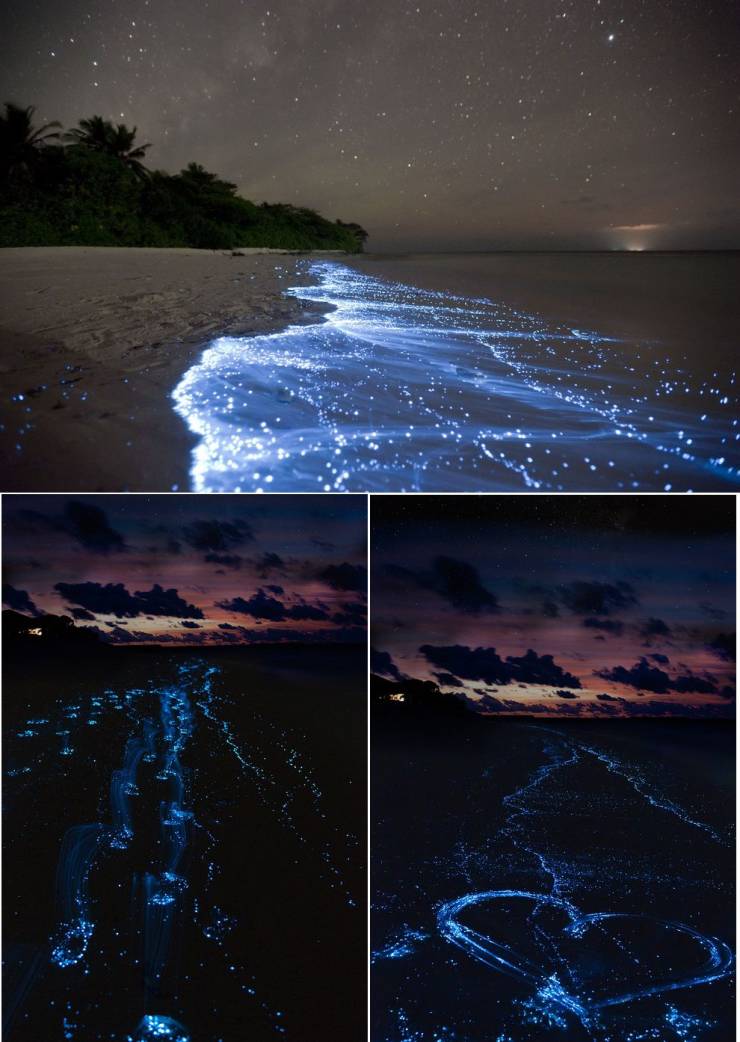 What may appear as a mirror image of the stars above, the bioluminescence in the water is actually due to marine microbes called phytoplankton. The effect it has on the shore is absolutely breathtaking. 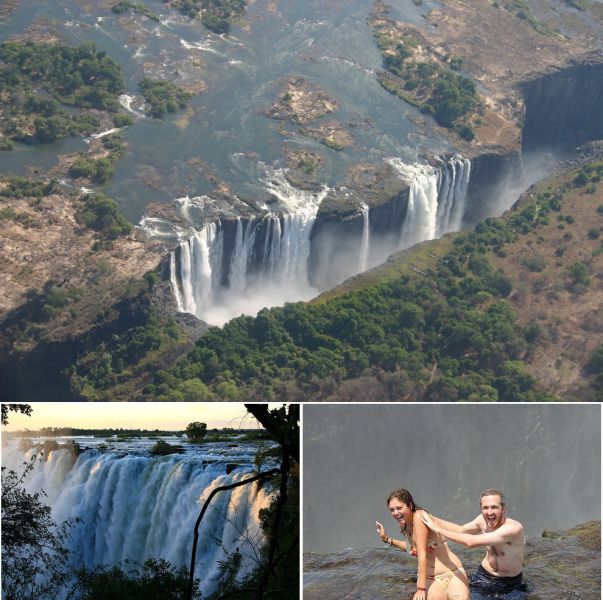 This 355-foot waterfall lies at the border of Zambia and Zimbabwe and it is the widest waterfall in Africa. There’s also a famous feature on the Zambian side called the Devil’s Pool, which allows adventurous tourists to hang out at the edge of the falls. 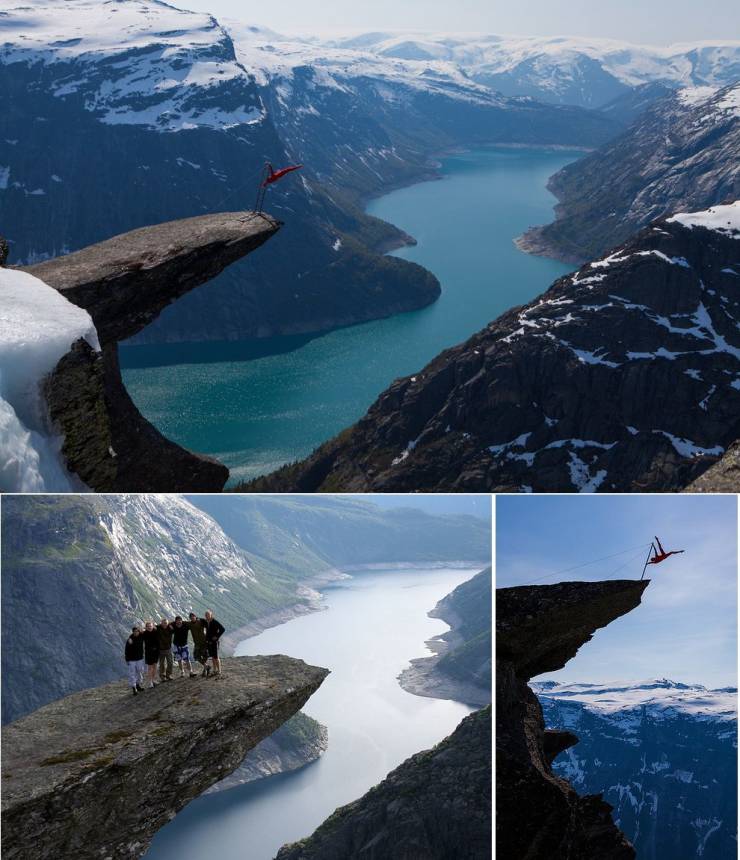 Trolltunga is a piece of rock that hangs out of the mountain about 2,000 feet up in the air. The Troll’s Tongue (translation in English) is available to hikers from mid-June to about mid-September. 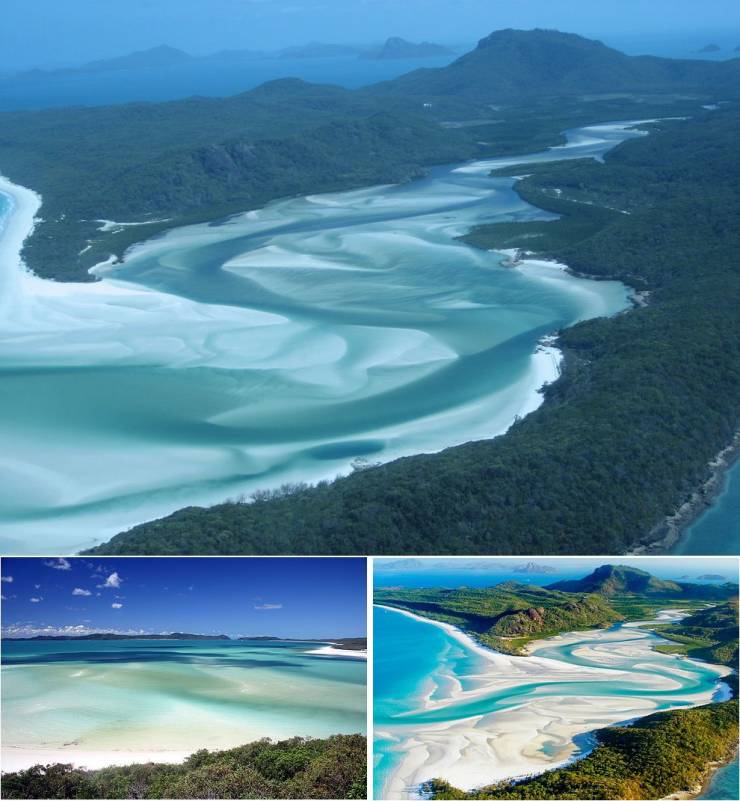 This beach is known for its beautiful white sands, which are believed to have been brought to the beach from sea currents over millions of years. The sand is very fine and does not retain heat, making it comfortable for a barefoot walk along the shore. It can also damage electronics, so keep your cell phones and cameras in a safe place! 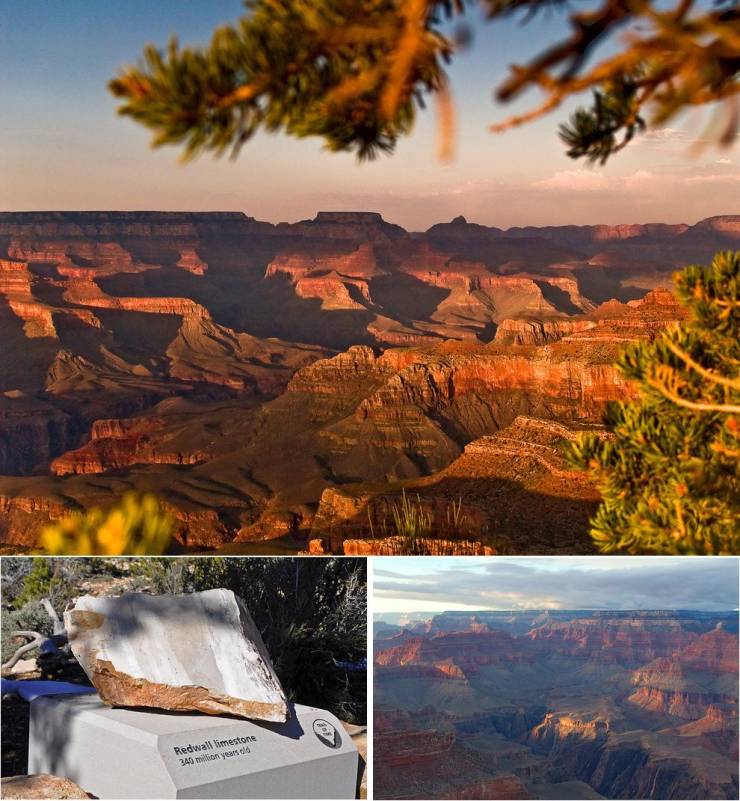 This magnificent beauty is 277 miles long and 18 miles wide, and is considered one of the Seven Natural Wonders of the World. 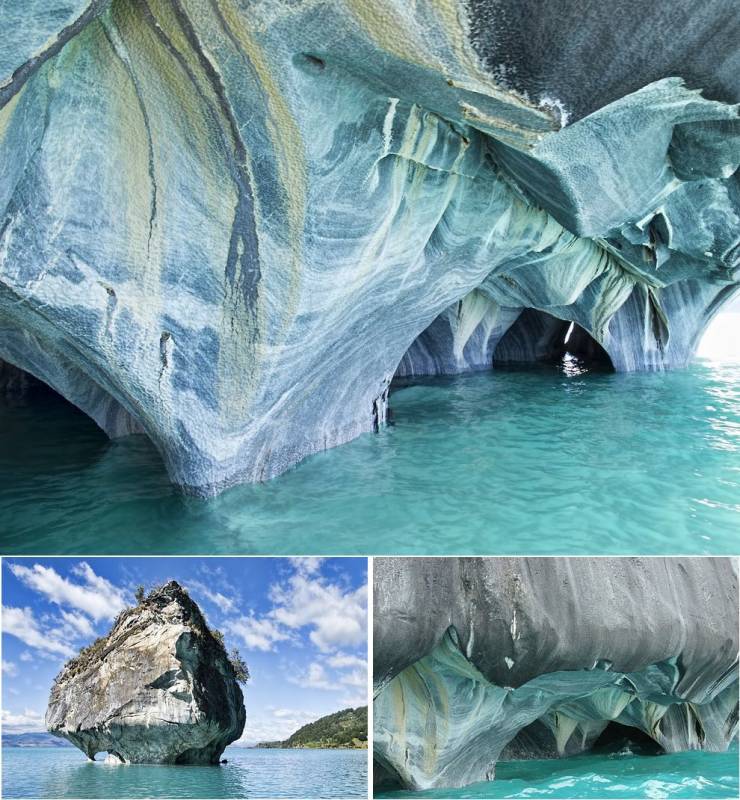 The Marble Caves, known as Marble Chapel and Marble Cathedral, are located at the center of the lake and were formed by waves over the past 6,000 years.

Tunnel of Love in Klevan, Ukraine 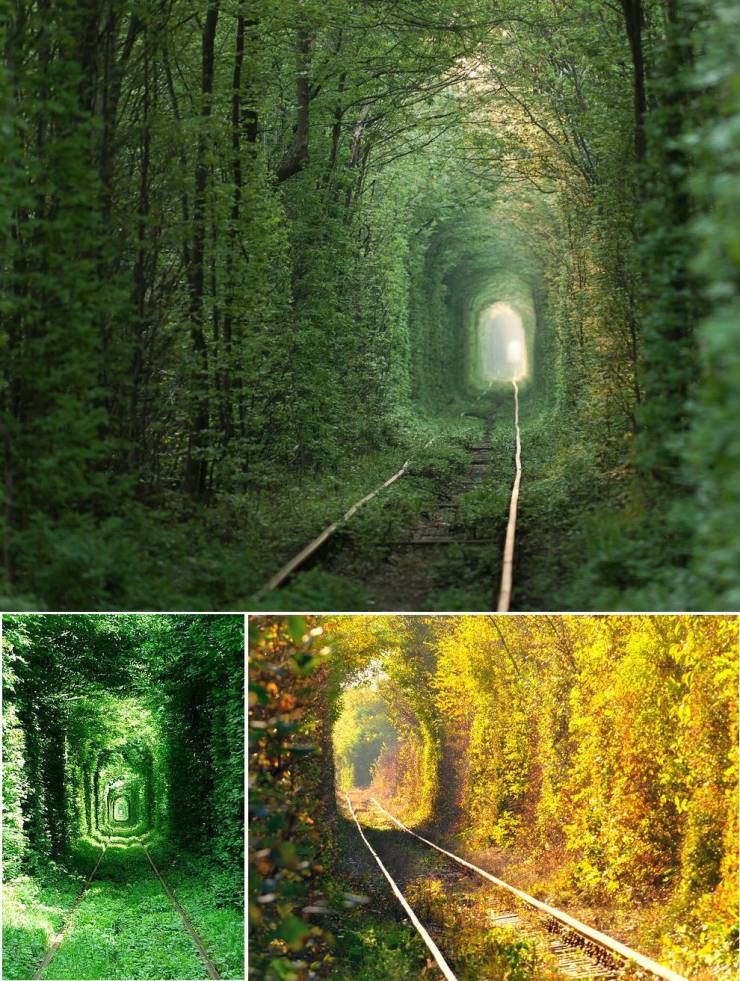 This railway engulfed in a tunnel of leaves is a Pinterest favorite and a Ukrainian hot spot for lovers. Although it’s undoubtedly romantic, there is an active train that travels through the tunnel three times a day to deliver wood to a factory. Just beware of the train before snapping engagement photos! 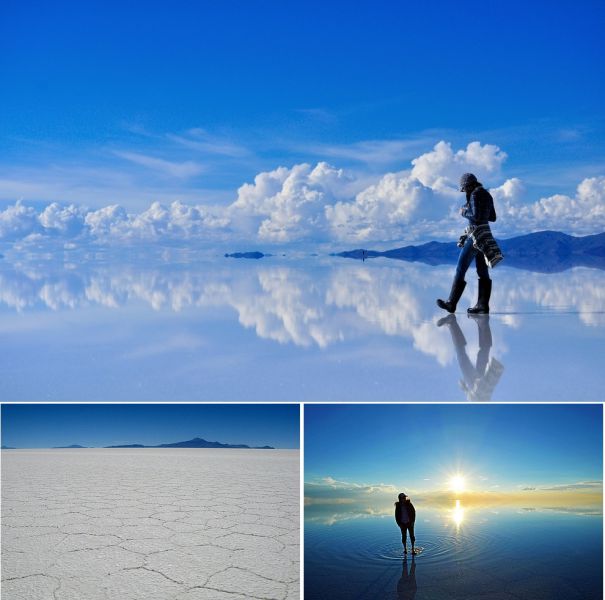 This is the world’s largest salt flat. It also becomes a giant mirror of the sky during the rainy season. 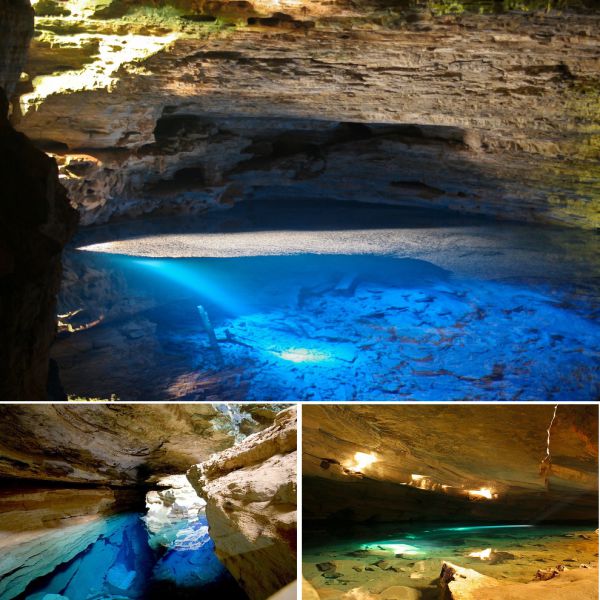 Located at Chapada Diamantina National Park, this well’s water is 120 feet deep and is clear enough to see the rocks. 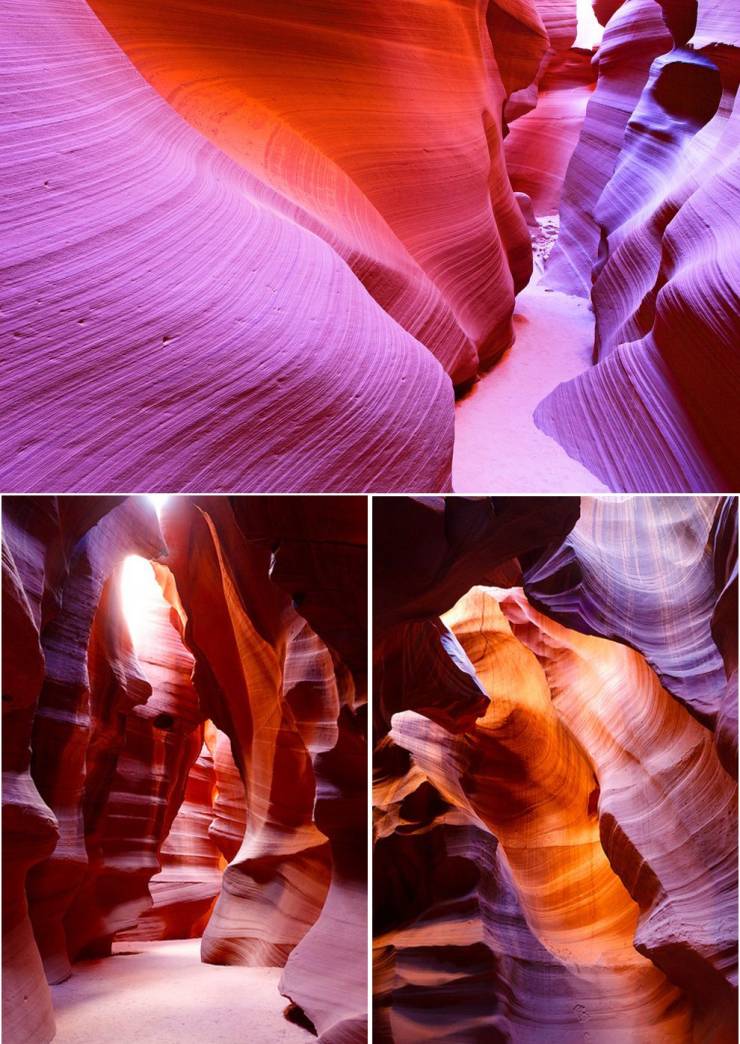 Located near Page, Ariz., this brilliant slot canyon is split into two different sections, commonly referred to as “The Crack” and “The Corkscrew.”

Fingal’s Cave on the island of Staffa in Scotland 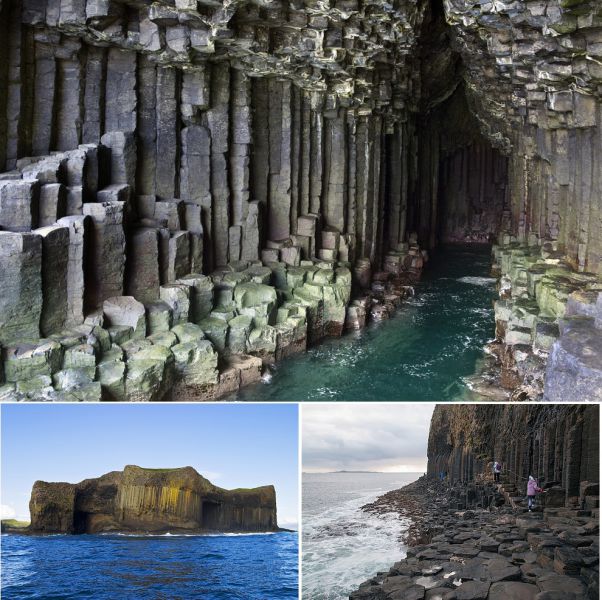 Although it may seem like this block structure is man-made, it was actually formed by hexagonally jointed basalt columns within a Paleocene lava flow.

To Sua Ocean Trench in the Lotofaga village on the south coast of Upolu, Samoa 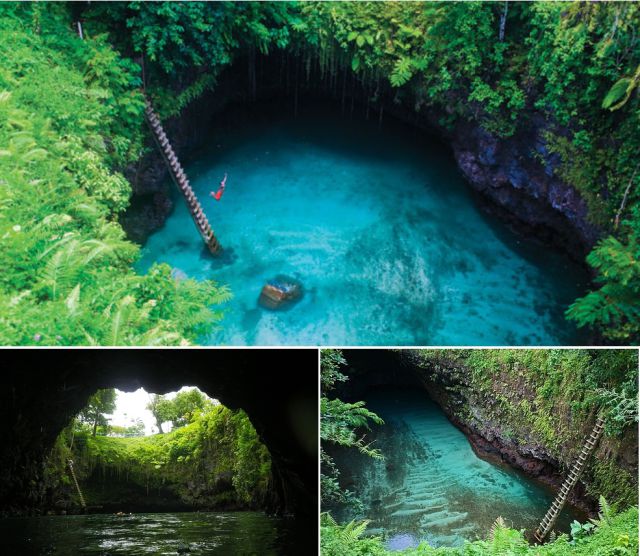 To Sua is a giant hole in Lotofaga that was converted into a swimming pool with water flowing through a lava-tube tunnel. 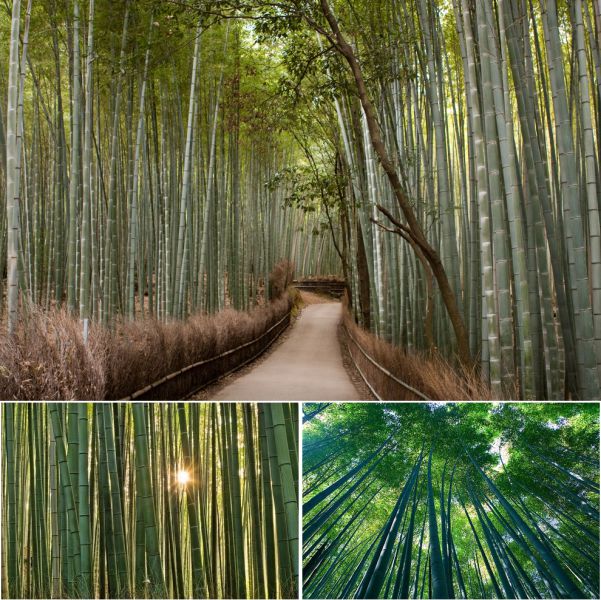 Often referred to as the “Bamboo Forest,” this tree-lined path is popular for walks and bicycle rides on a nice day. 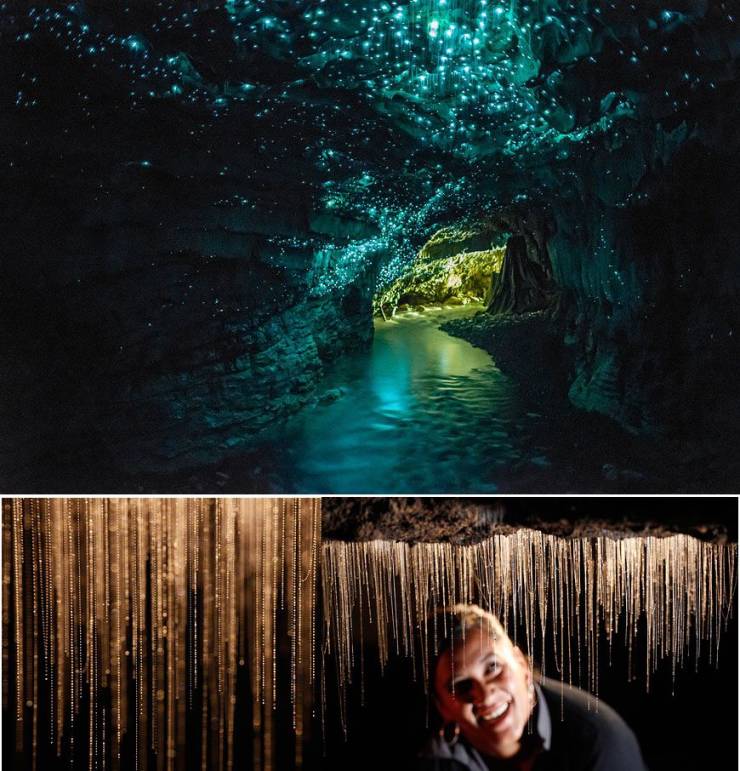 This specific spot in the Waitomo Caves is known as the Glowworm Grotto, a place where glowworms create a starry effect on the ceilings. This species is exclusively found in New Zealand and is around the size of a mosquito. 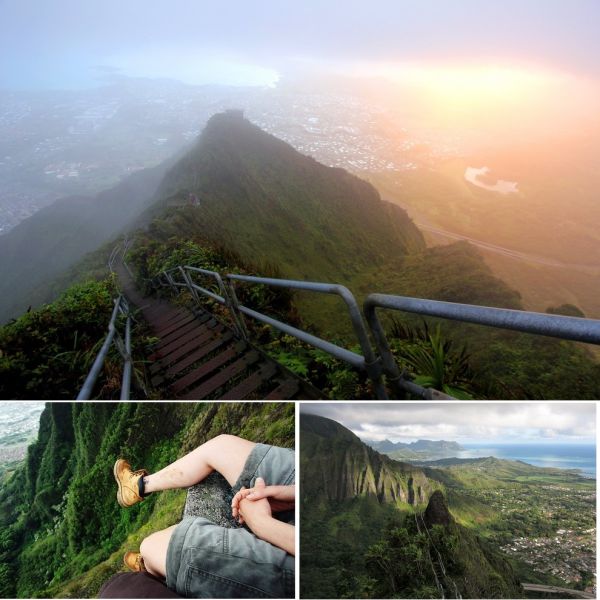 Stairway to Heaven is a steep hiking trail that is technically closed to the public, but many people continue to climb despite “No Trespassing” signs.

Volcanoes of Kamchatka in Russia 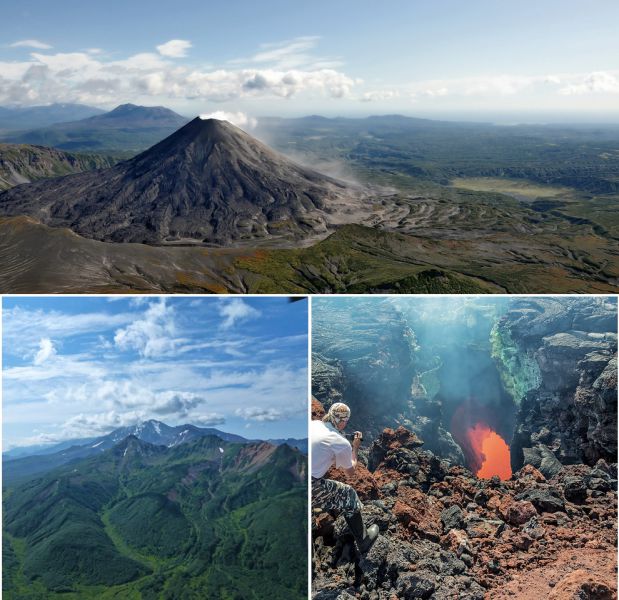 This large chain of volcanoes sits on the Kamchatka Peninsula, with 19 of them still active. The highest volcano is Klyuchevskaya Sopka, standing at almost 16,000 feet high.

Cenotes of Yucatán Peninsula in Mexico 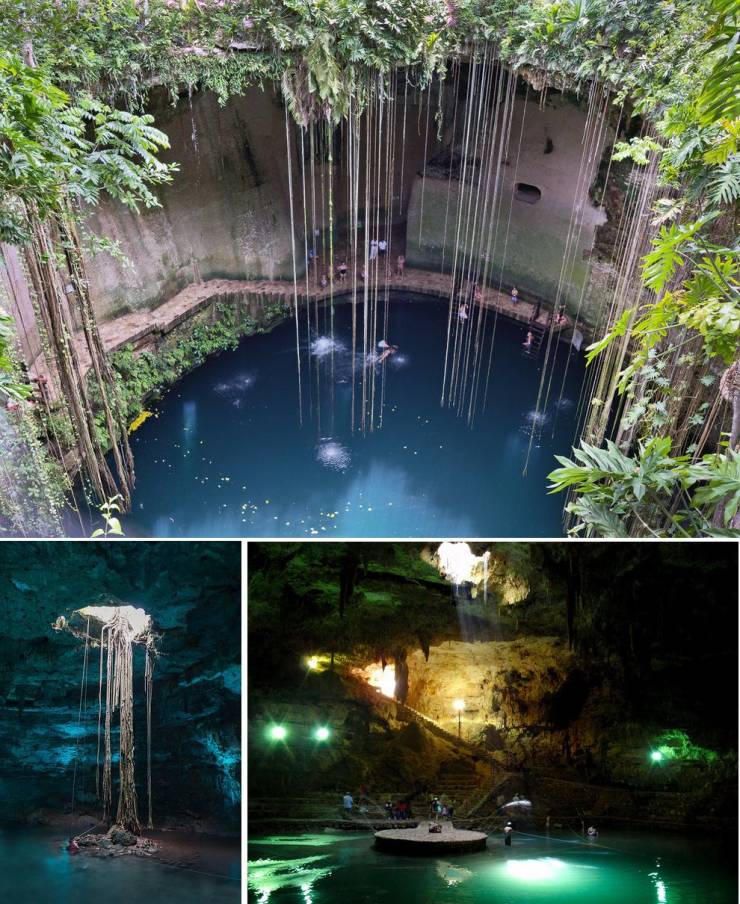 These sinkholes in Mexico were formed during the ice age and were held sacred by the Mayans. 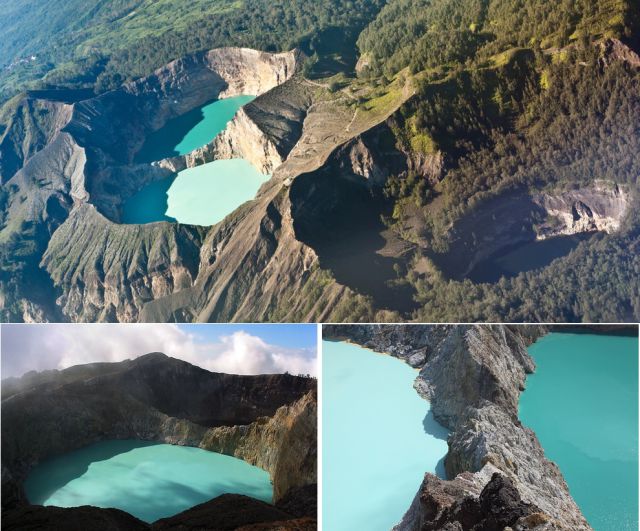 The westernmost lake is called the Lake of Old People and is usually blue, and the other two are called the Lake of Young Men and Maidens and Bewitched or Enchanted Lake, which are typically green and red, respectively. The colors vary on a periodic basis and have become a popular tourist destination.