A recent poll conducted by SurveyMonkey asked respondents to answer questions on which state was the “hottest”, “drunkest”, “ugliest”, “nicest” etc. The darker blocks had the most votes and the lightest blocks had the least votes. The results are pretty amusing.

Massachusetts has the weirdest accent. Trailing close behind are Alabama, Minnesota, New York and New Jersey. 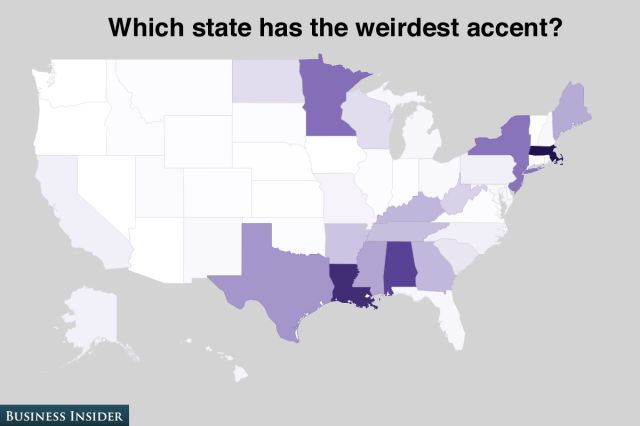 New York scored around 20% of the vote for best food. California and Louisiana get honorable mentions. 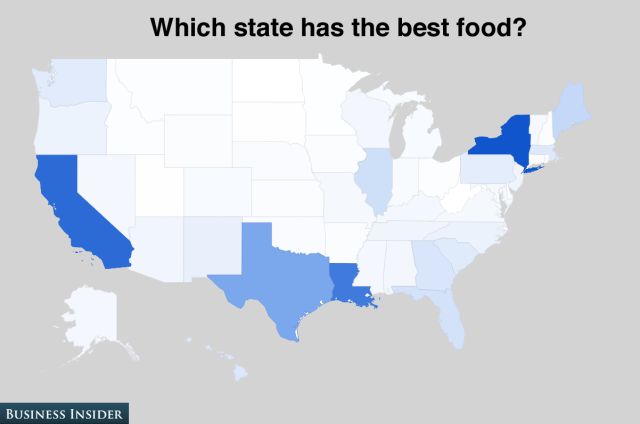 Hey Alaska, the rest of America thinks your food sucks. 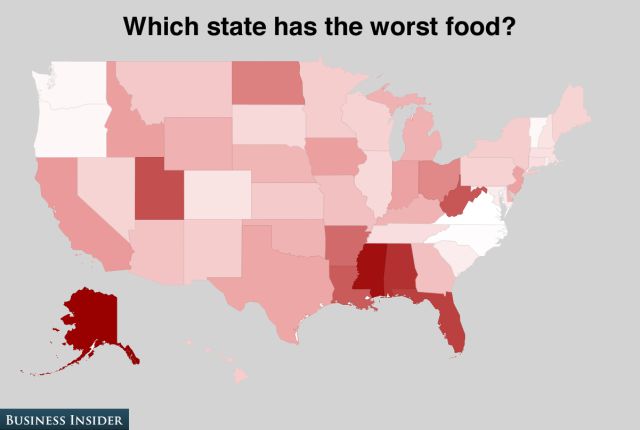 Besides their own state, people had the highest opinion of California. Colorado is also pretty popular. 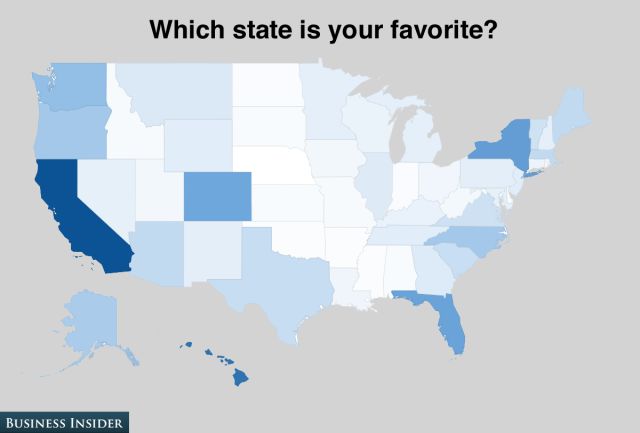 That’s what you get, Texas, for always pulling the “We can leave America whenever we feel like it” card. 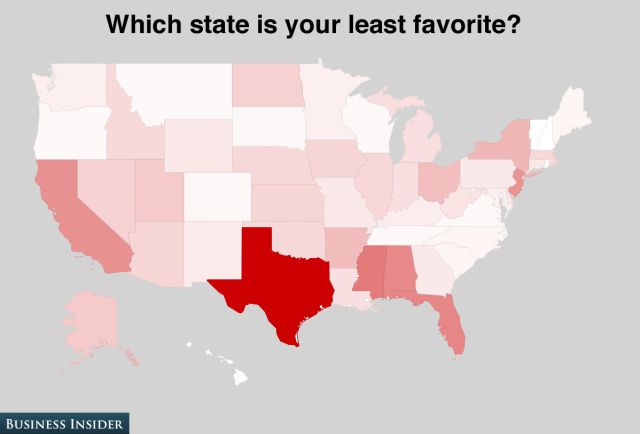 California is considered the craziest state… 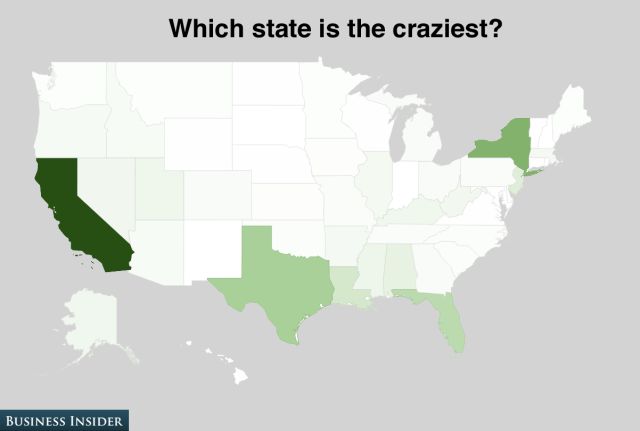 …but California is also the hottest. Funny how things always seem to turn out like that. This question wasn’t even close, it appears that Katy Perry was right. 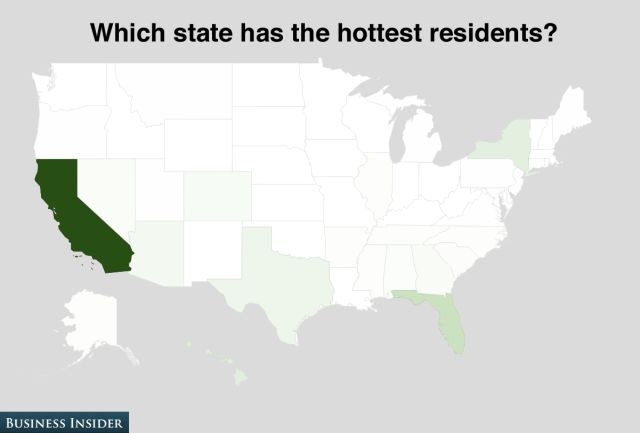 America had trouble deciding which state was the ugliest. We know it’s in the south somewhere, with Alabama in the lead. 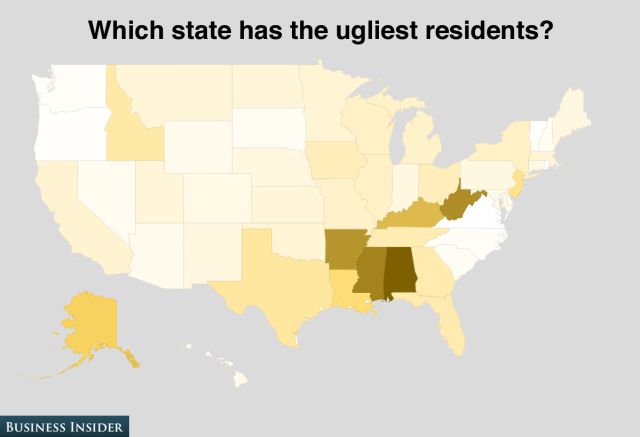 Colorado has the most beautiful scenery in the country, followed closely by Hawaii. Honorable mentions to Alaska, Montana and California. 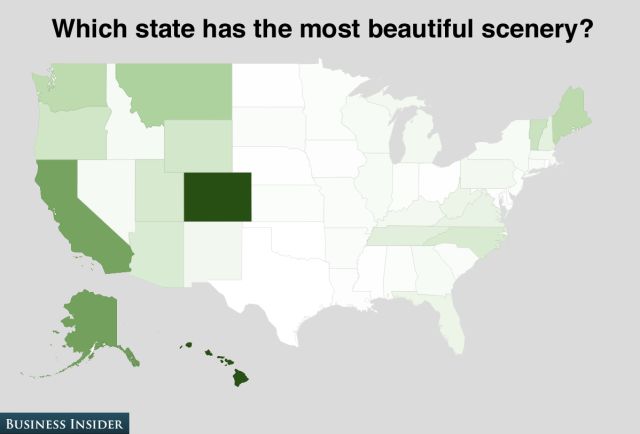 Kansas has the worst scenery. People also went out of their way to pick on Jersey on this one. 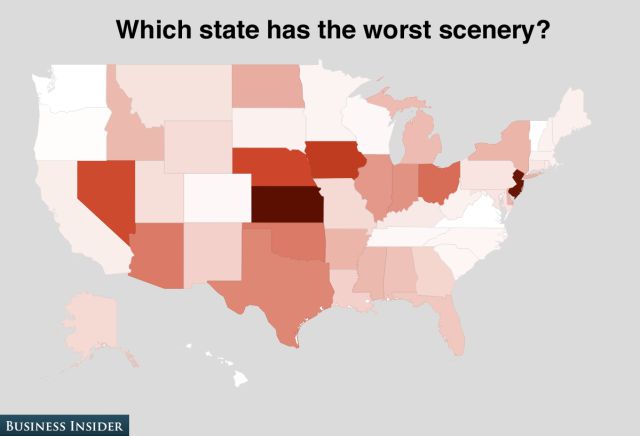 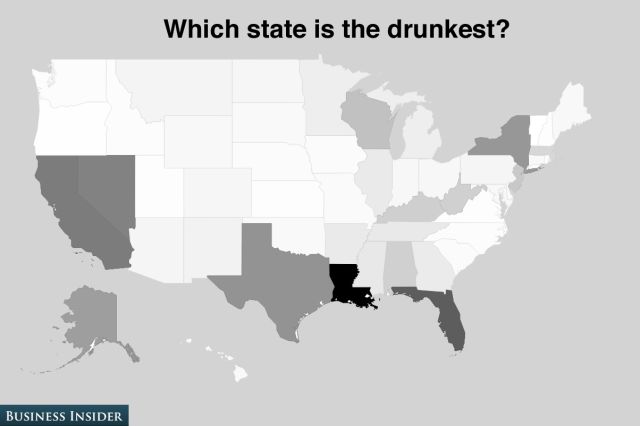 People love to vacation in Hawaii, Florida, and California. 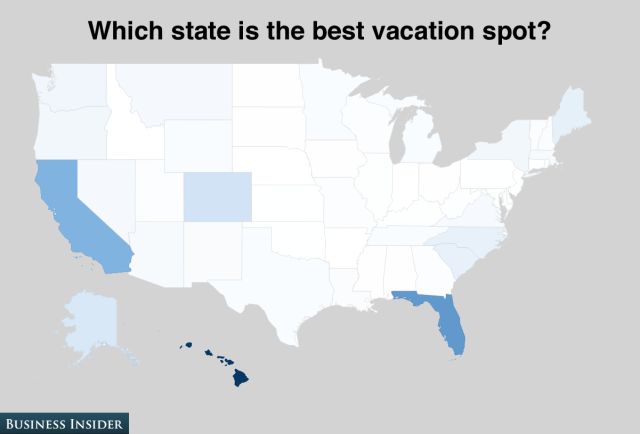 New York is the most arrogant. 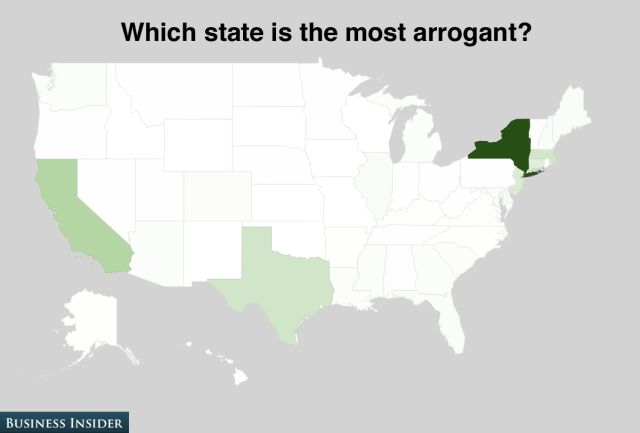 New York is also the rudest. Who could have guessed. 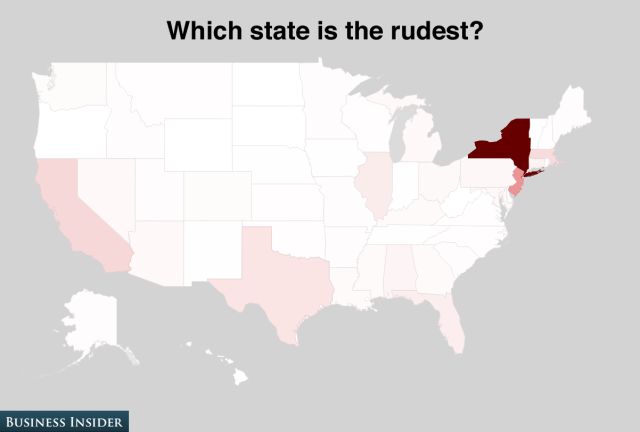 Georgia is the nicest, followed by Minnesota. The South gets high marks here, potentially because the rest of the country doesn’t understand that “Bless your heart” is facetious. 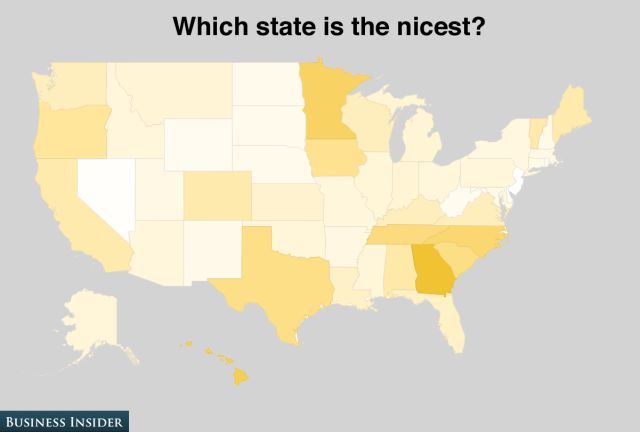 Massachusetts is the smartest. All those colleges probably. 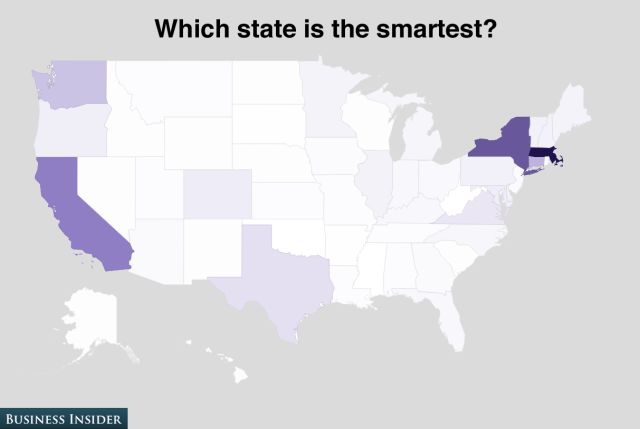 Mississippi is believed to be the dumbest. 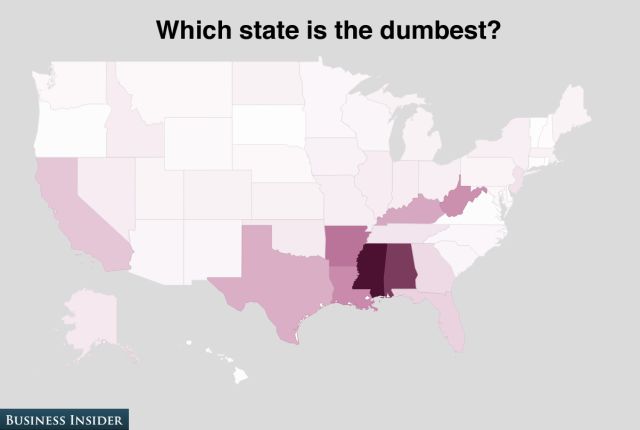 New York is the home of the best sports fans. 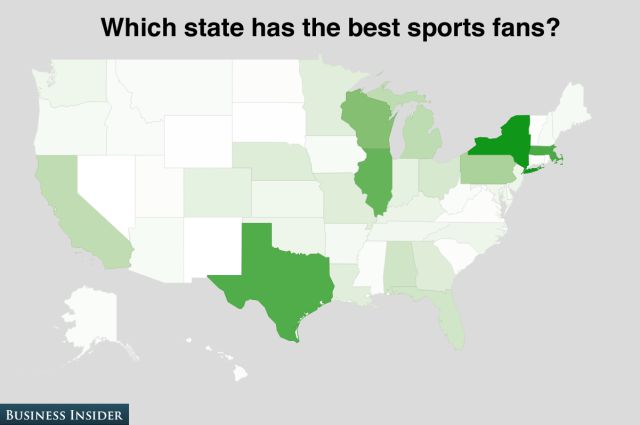 Most likely due to the fact that most Americans have never been to Philadelphia, the rest of the country believes New York also has the worst sports fans. I blame John Rocker. 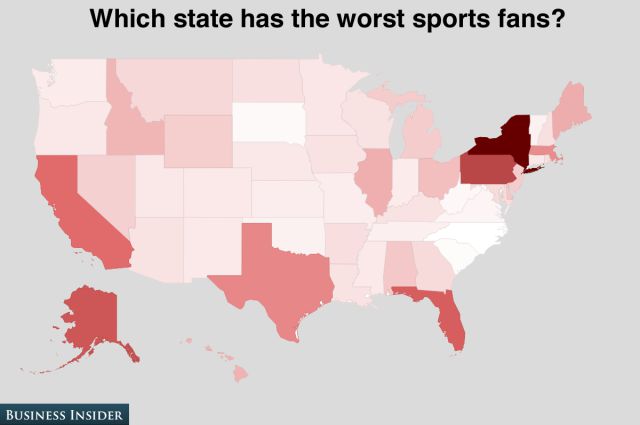 America is pretty down to mess with Texas on anonymous surveys. 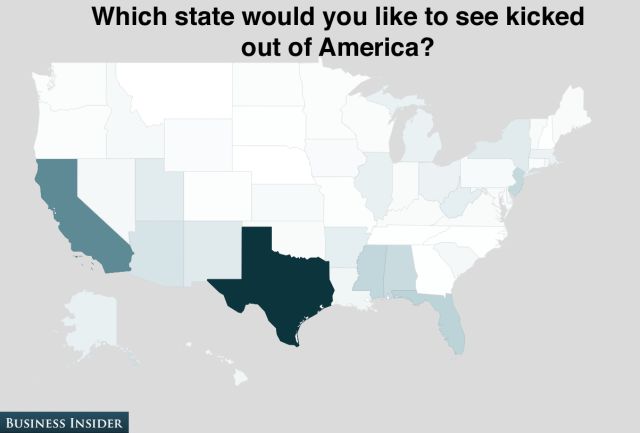 All the usual suspects are considered overrated. 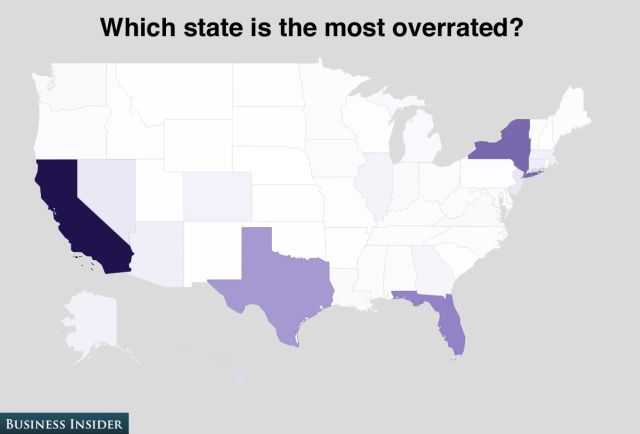 While this was the most competitive category by far, people seem to believe that Oregon, Alaska and Maine are the most underrated. 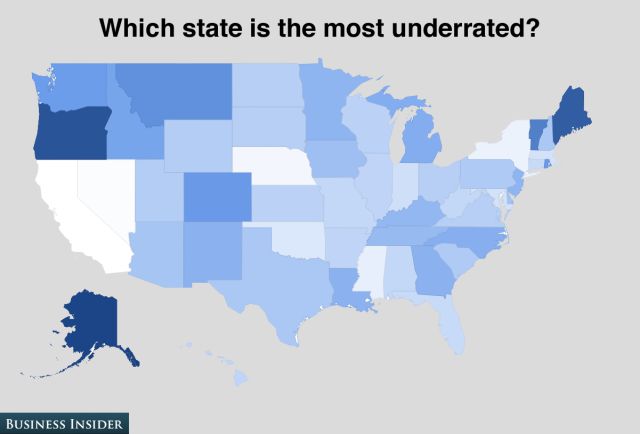 DarkWolf 5 year s ago
I live in the state of mediocrity. Mentioned not once.
Reply
0