Scarificator: Scarificators were used in bloodletting. The device had spring-loaded blades that would cut into the patient's skin, and a special rounded glass cup would then be applied over the wound to receive the blood (circa 1910-1920s).
1 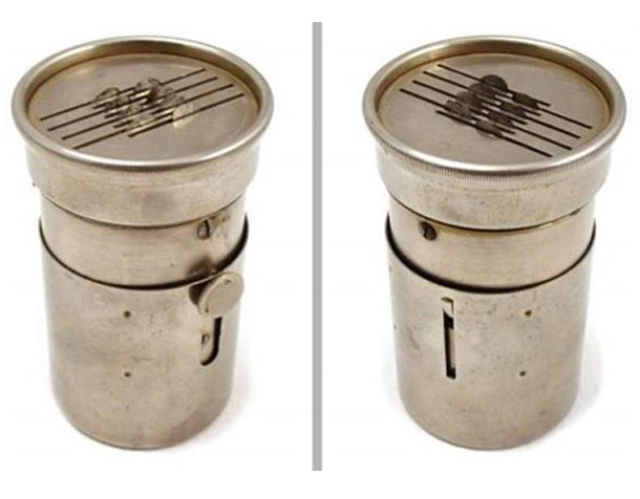 Electric Bath: This crazy-looking contraption was the precursor to the modern sun-bed (circa 1900).
2 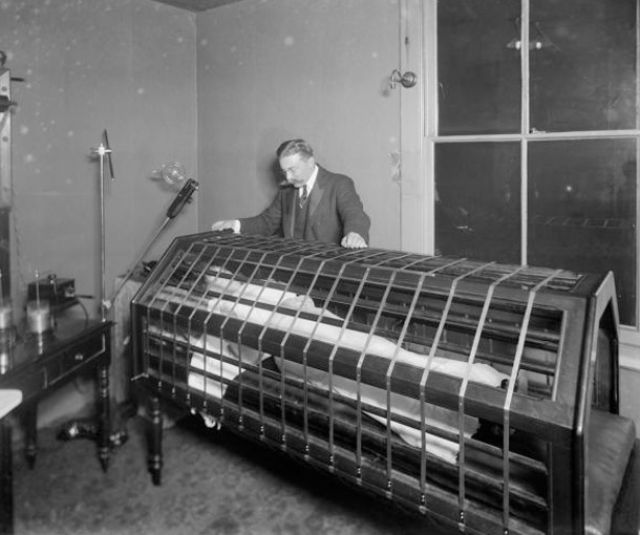 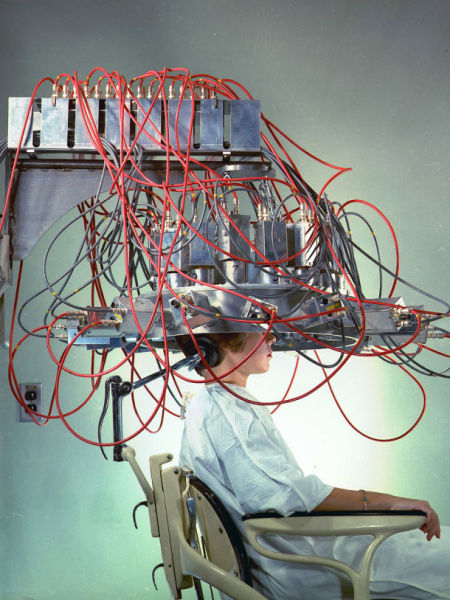 Vaginal Washer: As you can probably guess by the name, this device was used to clean the inside of one's vagina via a perforated water-spraying tube and a rotating squeegee scraper.
4 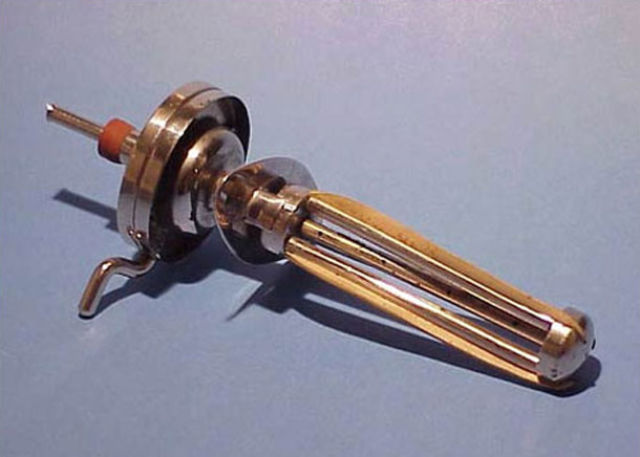 Bergonic Chair: The Bergonic chair was used in World War I to administer electroconvulsive therapy for some shell-shocked soldiers.
5 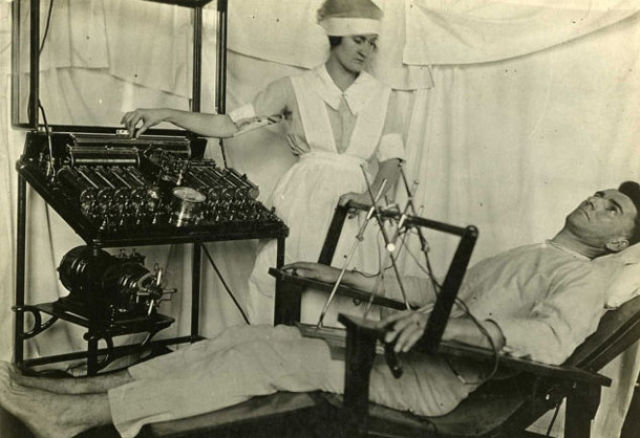 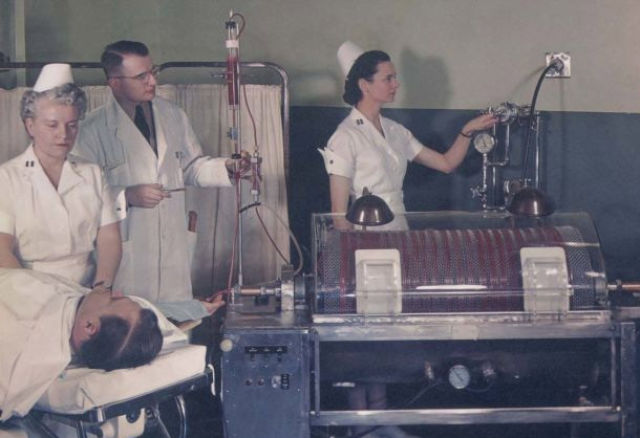 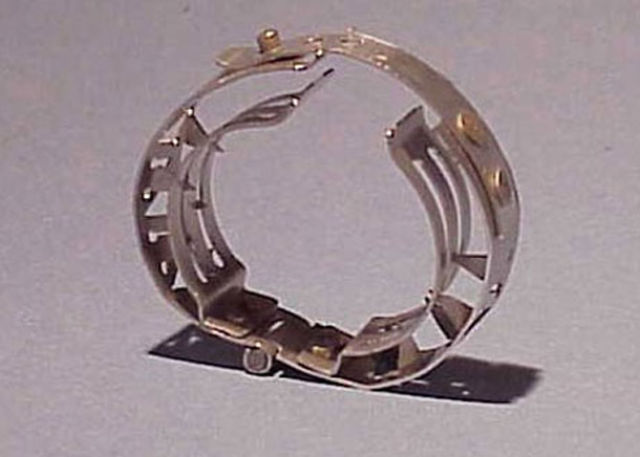 Electro-Retinogram: As if straight from a Saw movie, this apparatus was devised to measure the electric potential of the retina.
8 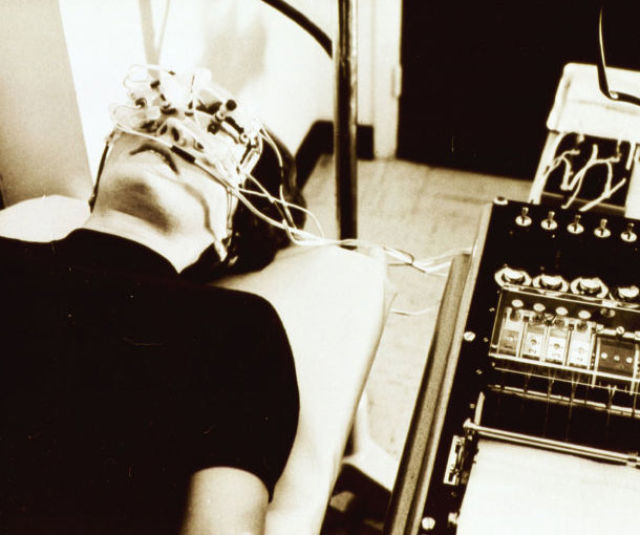 Cervical Dilator: This instrument was used to dilate the cervix during labor. However, such dilators became less popular because they often caused the cervix to tear.
9 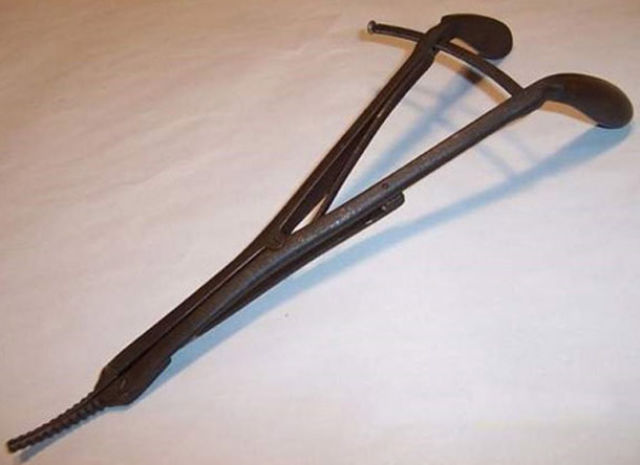 Bullet Extractor: Elongated bullet extractors were devices made to reach bullets embedded deep in the patient's body. These devices had a screw tip that was inserted in the wound and lengthened to pierce the bullet so that it could be pulled out.
10 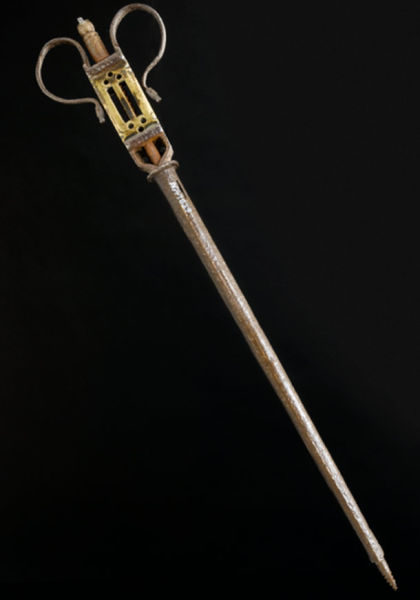 Osteotome: Invented by Bernard Heine around 1830, this medical instrument was initially used in trepanning. The sharp spike was driven into the patient's skull to hold the instrument in place, and then the doctor cranked the handle to turn the saw-toothed blade.
11 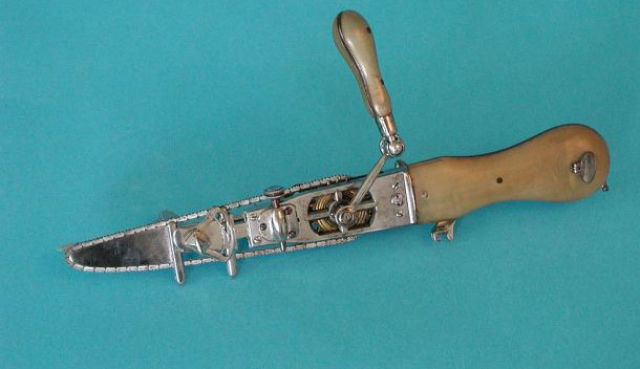 Trepine: Another device designed to get into someones skull was this hellish looking thing. The trephine was a hand-powered drill with a cylindrical blade and was used to bore into the patient's skull. The spike in the center started the procedure and held the blade in place.
12 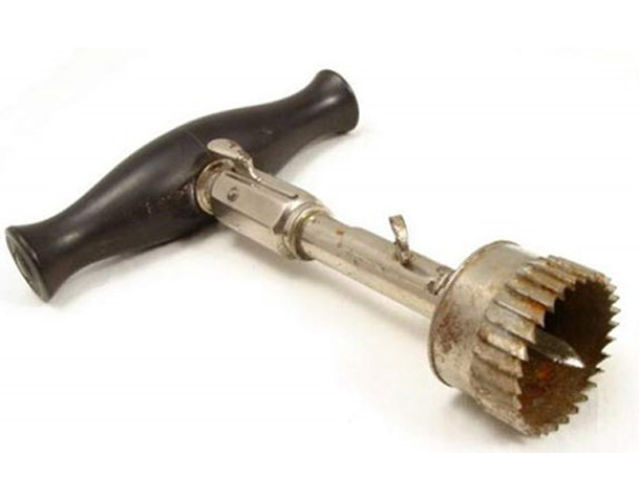 Ecraseur: The Ecraseur (French for "crusher") was a device used for the removal of hemorrhoids, tumors, polyps, and cysts in the esophagus, larynx, uterus, or ovaries. The loop on the end of the instrument housed either a saw-toothed chain or a simple wire and was used to strangle and crush whatever flesh it looped around.
13 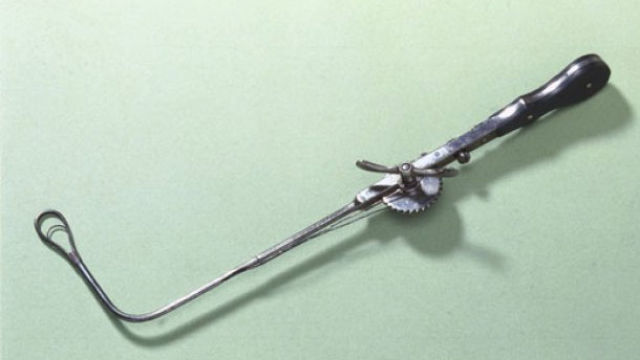 Hernia Tool: After the restoration of a hernia, doctors would use this device near the affected area in order to produce scar tissue, which would help seal off the hernia.
14 Electric Belt with Penis Strap: First intended to cure the fictitious disease of Neurasthenia, this belt's aim was to--in essence--shock virility back into the patient's penis. In order for the belt to work, it had to be submerged in an activating solution of sulfuric acid, vinegar and water. Then the internal batteries were sprinkled with a special powder (i.e. baking soda).
15 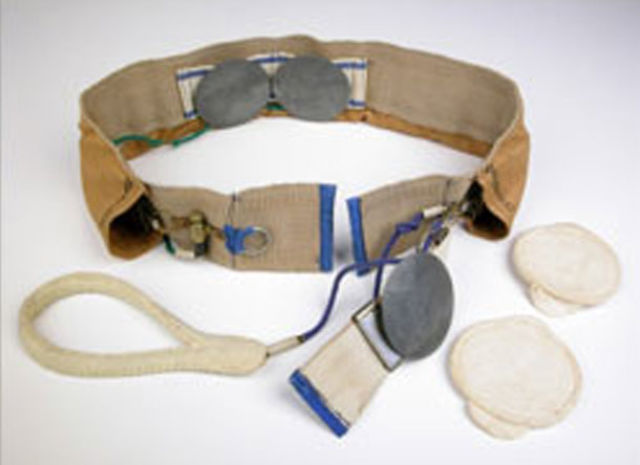 Stricture Divulsor: The Stricture Divulsor was used on male patients when their urethra became too narrow to permit proper urine flow. The instrument was inserted into the urethra via the tip of the penis. Then a screw in the handle was turned, which separated the blades and dilated the urethra.
16 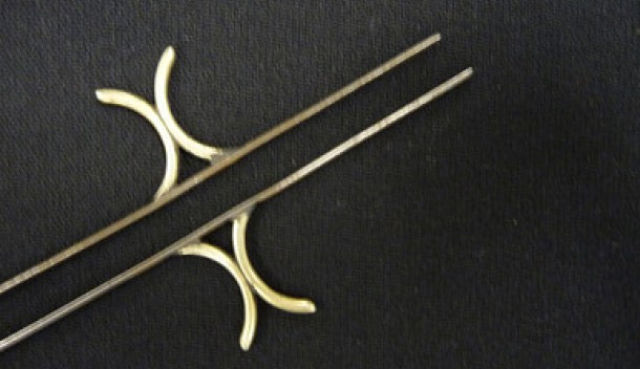 Tonsil Guillotine: To treat tonsillitis and its related complications, the tonsil guillotine was developed. This instrument permitted a doctor to reach into a patient's throat, pierce the tonsil and cut the tissue with the guillotine's blade.
17 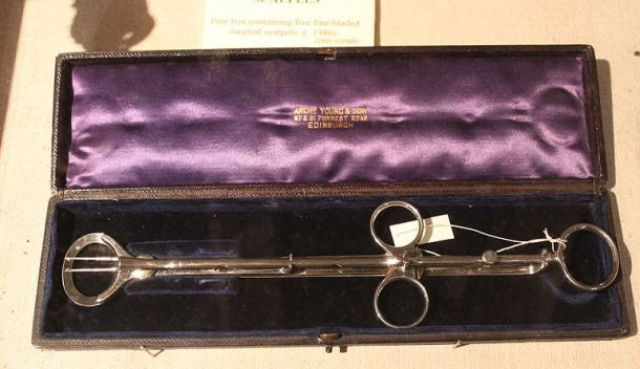 Hemorrhoid Forceps: This instrument worked by tightly grasping an external hemorrhoid and restricting blood supply, which left the damaged tissue to die and wither off.
18 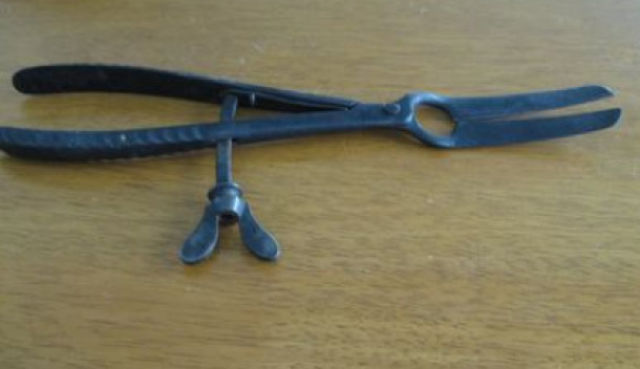 Fake Leech: You can probably infer from the name and the design of this thing that its main purpose was to draw blood. The sharp little blades would lacerate the skin while the tube would suck out the blood.
19 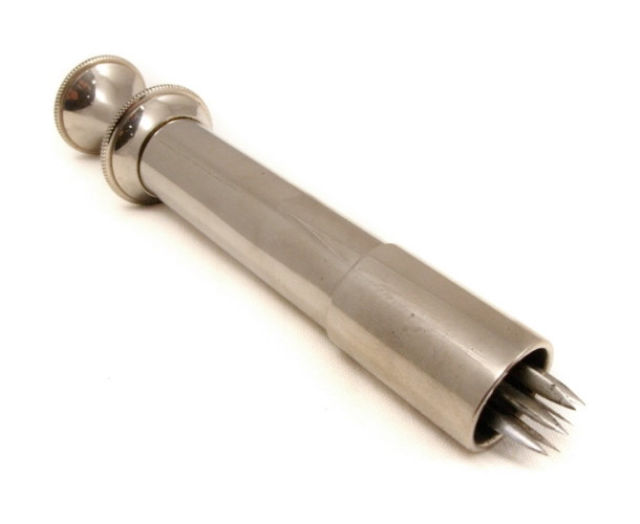 Hysterotome: This little device was inserted into the vagina in order to amputate the cervix.
20 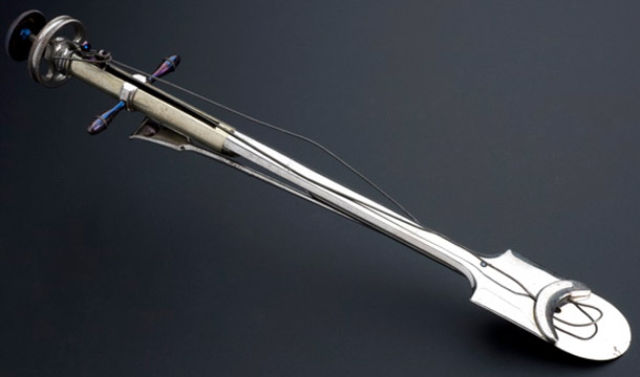 Skull Saw: Yet another device designed to saw into your skull. I'm sure glad I don't live in the Victorian age.
21 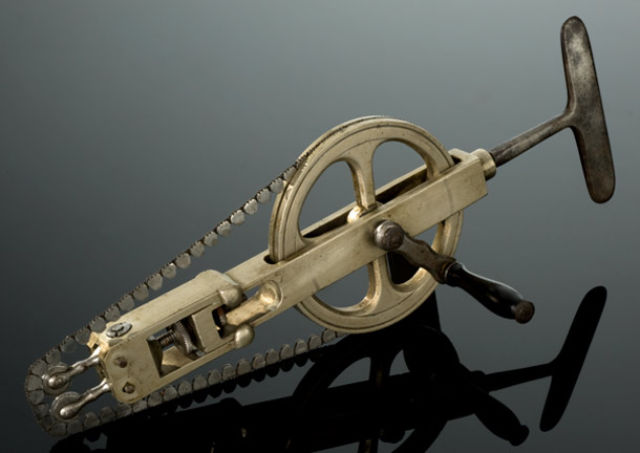 Smoke Enema: This odd device was used on patients who fell into icy waters. Infusing tobacco smoke into a patient's rectum was thought to help patients warm up and recover sooner. There were doubts about the credibility of tobacco enemas, which led to the popular phrase: "blow smoke up ones ass."
22 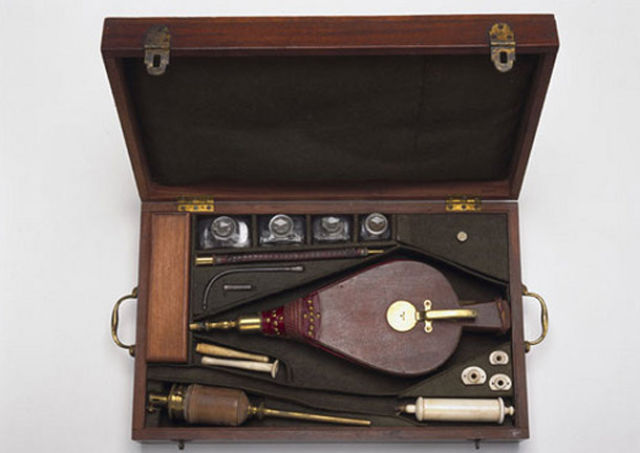 Circumcision Knife: Circumcision is still practiced today, but few instruments used in the process are as intimidating as this European knife from the 18th century.
23 Lithotome: The Lithotome was a device used to cut the bladder in order to remove stones. The shaft contained a hidden blade that was inserted into the bladder and then released using a spring handle.
24 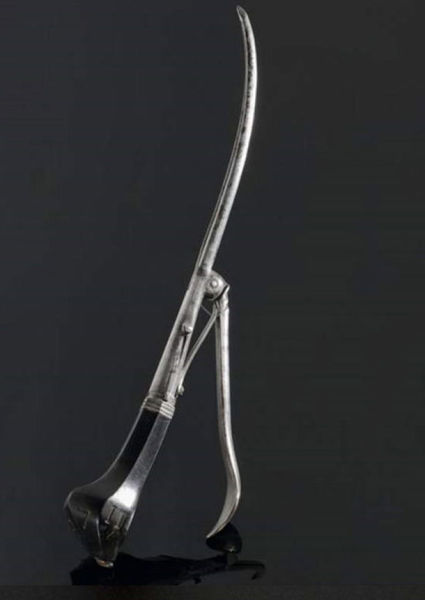 Civil War Dental Screw Forceps: Pretty much any dental device is enough to make me cringe, and this device is no different. The forceps grabbed the tooth while the screw tapped the dental roots--and all before the advent of anesthesia. Come to think of it, pretty much all of the instruments on this list (with the exception of maybe 5) were used before anesthesia.
25 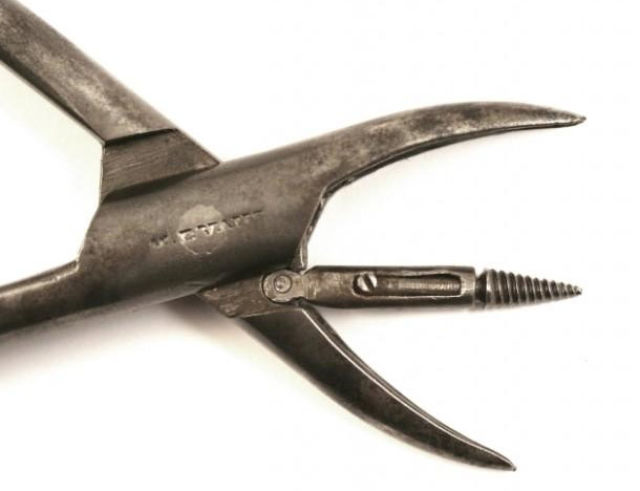