Here are a few things you have probably wondered about in secret but science now gives you the answers you need. 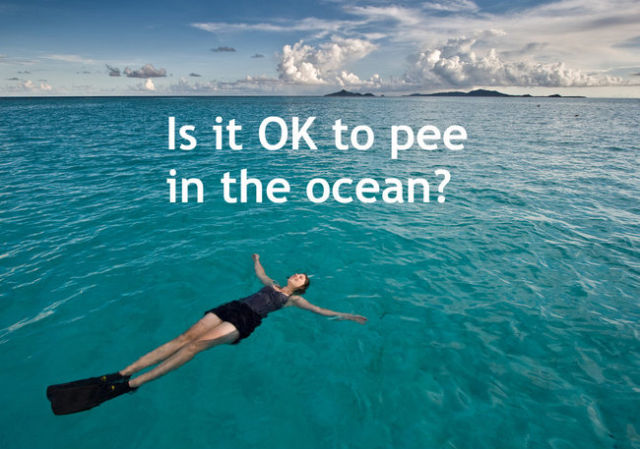 Two-thirds of people surveyed by toilet paper purveyors Proctor & Gamble admit to peeing in the ocean and almost half said they had done it more than once. However this doesn’t count as ocean pollution because of what urine actually is: 95 percent water and some sodium and chloride ions, aka table salt. Both things that the ocean already has in spades. The one thing pee has that the ocean doesn't is urea. It's a carbon-based compound that helps the body rid itself of nitrogen. But according to ocean scientists, the nitrogen in urea combines with ocean water to produce ammonium, a compound that actually acts as food for ocean plant life. 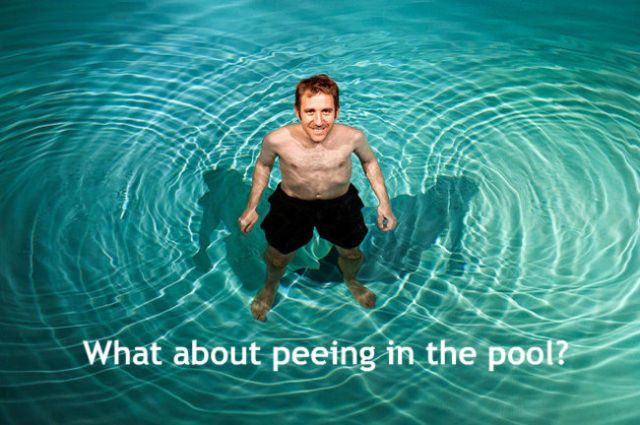 A while back everyone was in a panic because of a study that said urinating in a chlorinated pool creates a toxic chemical called cyanogen chloride (similar to tear gas). The fact of the matter is a pool would have to be two parts water to one part chlorine in order to create this reaction, and then you'd probably be more concerned with your melting skin and eyeballs. So while it's chemically safe to urinate in a pool, common decency still begs that you hop out and put it in toilet. No one wants to paddle through your yellow cloud. 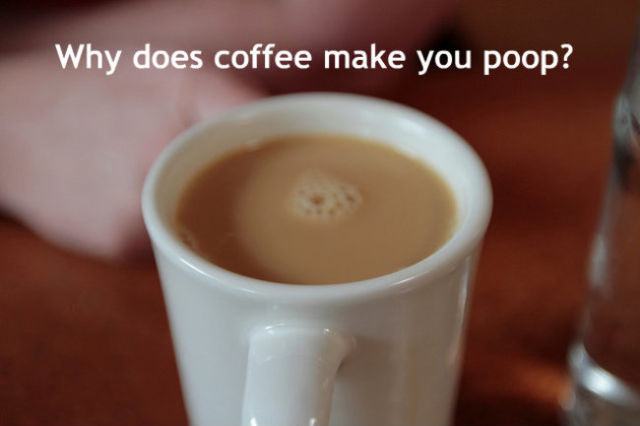 Ever taken a few sips of your morning java, only to feel that special rumbling that sends you searching for a restroom? Apparently this happens (to around 50 percent of coffee drinkers) because coffee stimulates muscle contractions along the last bit of your large intestine (a part science calls the rectosigmoid colon). If you’ve got one in the chamber, coffee is likely to rattle it loose. 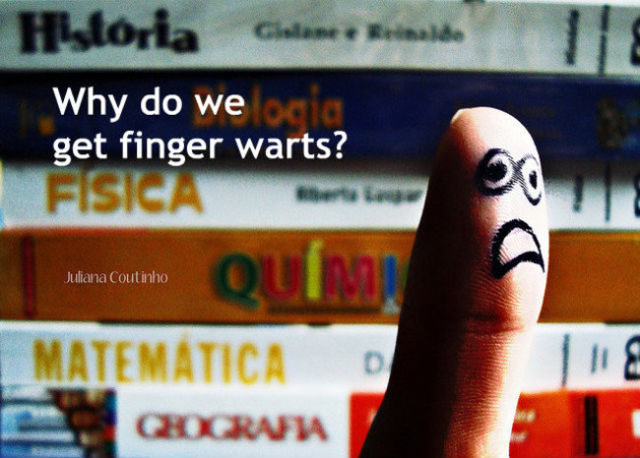 All warts are infections caused by the human papilloma virus (HPV). There are over 100 varieties of HPV, from the highly contagious kind that causes genital warts, to the much less contagious kind that causes common warts on the hands and fingers. When this pesky virus invades this outer layer of our skin, usually through a cut or scratch, it causes rapid growth of cells on the outer layer of skin – which is what we call a wart. 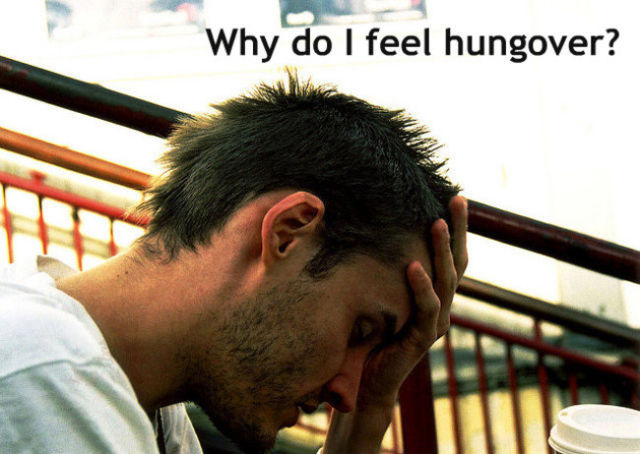 The short answer is, of course, consuming too much alcohol, but what is it specifically that causes our bodies to punish us so? It's not one thing, but an accumulation of several factors: a) alcohol makes you pee more, which speeds dehydration; b) alcohol consumption raises the production of stomach acids and slows the rate at which the stomach empties itself, both of which lead to nausea and vomiting; and c) drinking often causes blood vessels to dilate, which can cause headaches. Put 'em all together and whatcha got? Worst morning ever. 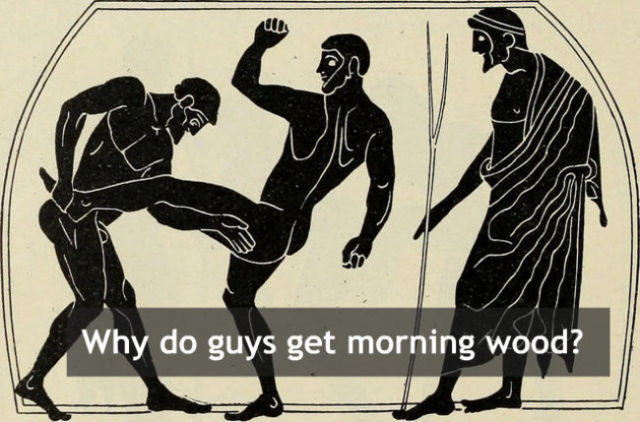 Although the science on this is hardly firm, the theories are most interesting. First of all let's call Morning wood by its scientific name--nocturnal penile tumescence. It’s a perfectly natural occurrence experienced by healthy men 3-5 times a night regardless of what kind of dream they have. It is theorized that the body triggers NPT to stretch out the cavernosum (the two sponge-like regions that fill with blood to cause erection), something that helps prevent bed-wetting and erectile dysfunction. 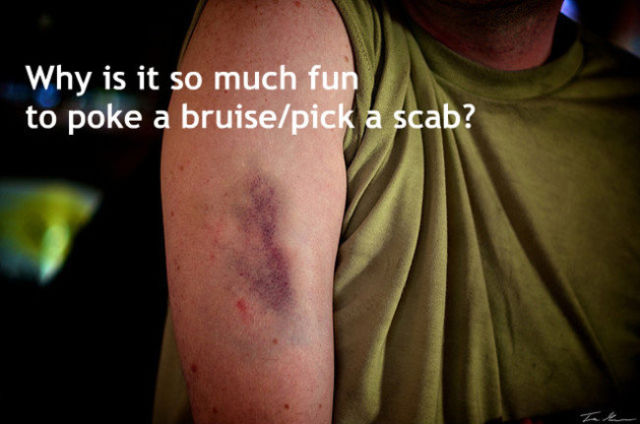 Bruising, a common affliction, happens when we rupture blood vessels under the skin (usually by whacking a limb on something). This injury results in inflammation, which triggers pain receptors in the muscles and skin. I.e. it hurts. So why would we then poke or rub it while so sensitive? It's actually a way of managing the pain. When we rub a painful area, it triggers other receptors in the skin, such as those that sense pressure, light touch, temperature, etc. By activating these other receptors for a short time, it actually "drowns out" the pain being detected by the brain, providing a moment of relief.

Picking scabs is an entirely different issue, but like rubbing a bruise, something we seem to do instinctively. On one hand, it can be a symptom of "obsessive-compulsive tendencies that often signal an underlying, often as-yet-undiagnosed mood or anxiety disorder." On the other, some experts say it's a remnant of the way our ancestors were compelled to groom, lick, and preen themselves. Scabs are like plaster over a healing wound, and they definitely itch, so maybe it's just a response to the fact that we're hyper aware of it. 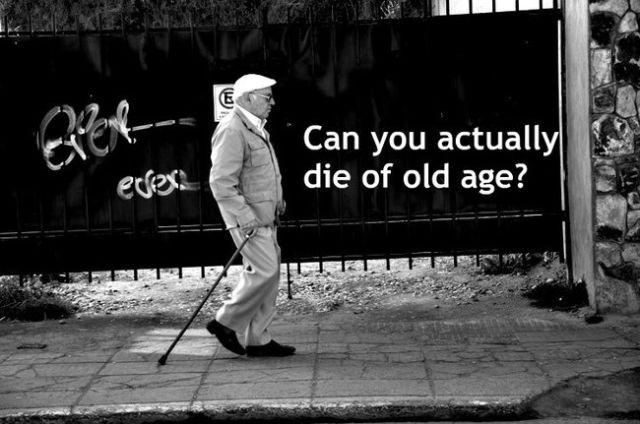 No. While it's true that living cells have a finite life span, an organism never simply dies because its cells got too old. However, old cells are weak. This can mean organ malfunction or shut-down. It also means old cells can’t fight off disease as easily or heal as well as they once could. This means illnesses and injuries that would barely affect a young person can be fatal for an old one. 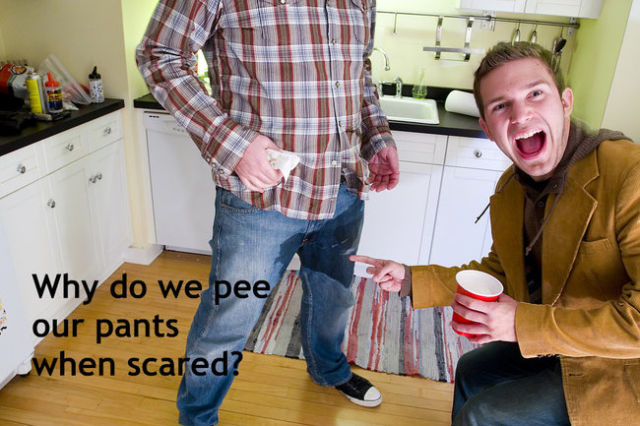 Blame your brain. You might be surprised to learn that although you feel the urge to urinate in your nether regions, the actual act is controlled by your head. I'll let Slate explain the rest: "Under stressful conditions...the inhibitory signals from the frontal lobe [aka what keeps us from peeing as soon as our bladder is full] can themselves be overridden by the limbic system, a combination of brain areas that controls the famous 'fight or flight' response. When we become stressed or anxious, electrical signals from the limbic system become so intense that the brainstem has trouble following the frontal lobe’s commands. That’s why many people urinate more frequently before important exams or in the starting corral of a marathon." 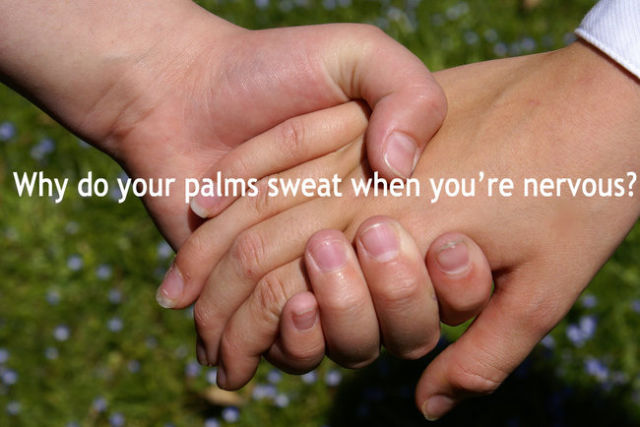 Medically, the condition of having excessively sweaty palms is known as "Palmar Hyperhidrosis" and it's caused by two different things: emotional stress and your body trying to control its temperature (thermoregulation). The two are closely intertwined, which makes things complicated, so let's make a long story short: When we get excited, scared, or nervous it causes a reaction from your sympathetic nervous system, which stimulates the Eccrine glands on your face, palms, soles of your feet, and in your armpits. 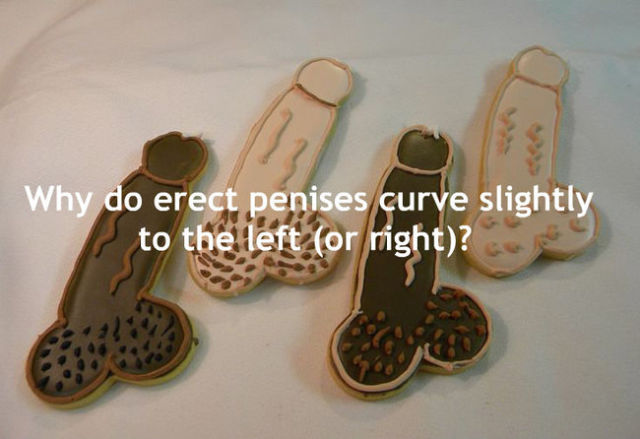 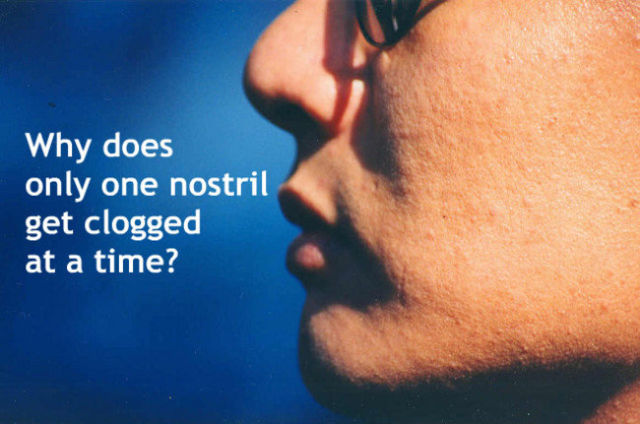 Because your nostrils are good buddies that take turns doing the work. No seriously. Even when you’re not sick, nostrils split the workload, with the a majority of the air going in and out one nostril, and a much smaller amount passing through the other. "Every few hours, your autonomic nervous system, which takes care of your heart rate, digestion and other things you don't consciously control, switches things up and your other nostril does all the heavy lifting for a little while," explains Mental Floss. "...[B]ut when you're sick and really congested, the extra mucous often makes the nostril that’s on break feel much more backed up." 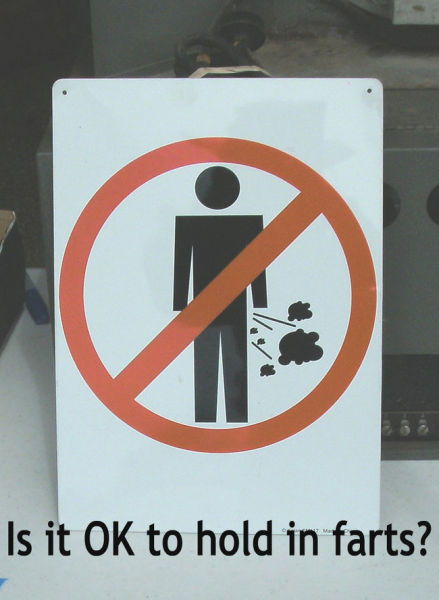 Farts are a natural part of the digestive process. If you feel one, it means your body has excess gas it needs to expel, and you should probably let it out. But what if it's socially impossible to let one fly? Hold it in, and the urge usually passes, but that's not necessarily a good thing for your bowels. Not farting farts can cause gas, bloating, and other uncomfortable symptoms, and if you do it too often, repressing gas can cause hemorrhoids or a distended bowel. The good news is, even if you hold in every single fart all day long, they'll all come out as soon as you fall asleep. 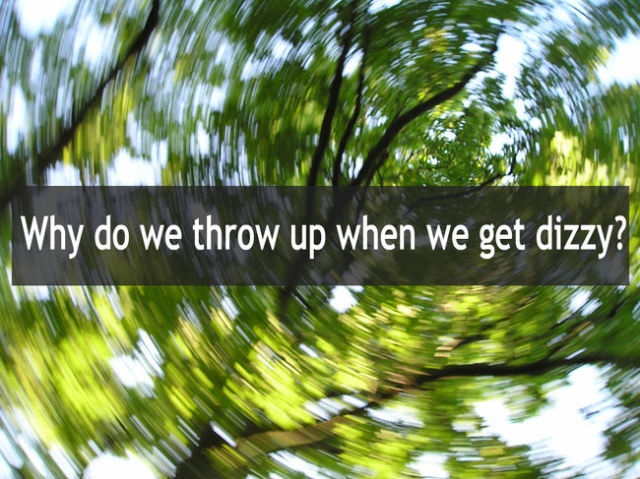 The short answer is, "because your brain thinks it’s being poisoned." Bet you didn’t expect that, huh? Vomit happens for one of three reasons: something irritates your brain, something irritates your gut, or something throws your hormones out of whack (usually pregnancy). When your eyes see something different from what the fluid in your inner ears is telling your brain (i.e. when you’re catapulting through space on a carnival ride) it's irritating. Your brain suspects foul play, and just to be sure, ejects the contents of your stomach. 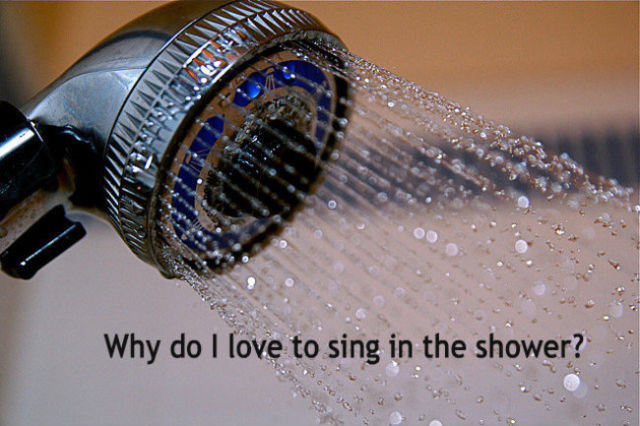 Again, the science is inconclusive but there are two major theories. One school of thought maintains that we feel more relaxed and comfortable in the shower, not to mention that we’re typically alone. This physical comfort gives way to mental comfort, and before you know it, you're belting out Taylor Swift (don't lie). The other theory is that the tile, plastic, glass or ceramic that lines your bathroom creates an acoustically-pleasing environment. This makes your voice sound fuller, and helps hide imperfections in tone and pitch, thus releasing your inner opera star. 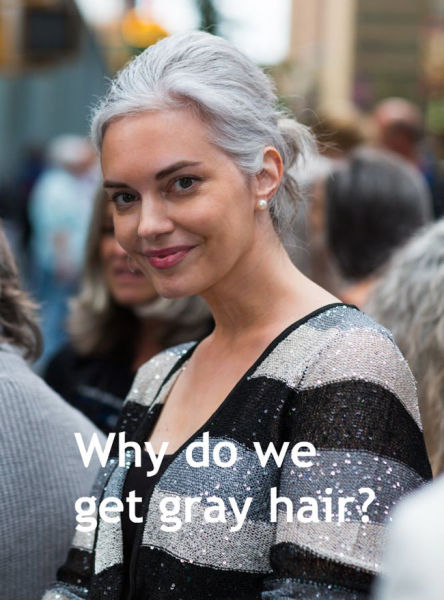 Hair itself has no color (mind-blowing, right?). The hue of your mop depends entirely on pigment secretion. This is why hair color can appear to change over time. When a person ages, the body gradually stops producing the pigment, and the hair returns to its natural state: grey or white. The time when the greying occurs is genetically controlled, which is why it happens much earlier for some people. 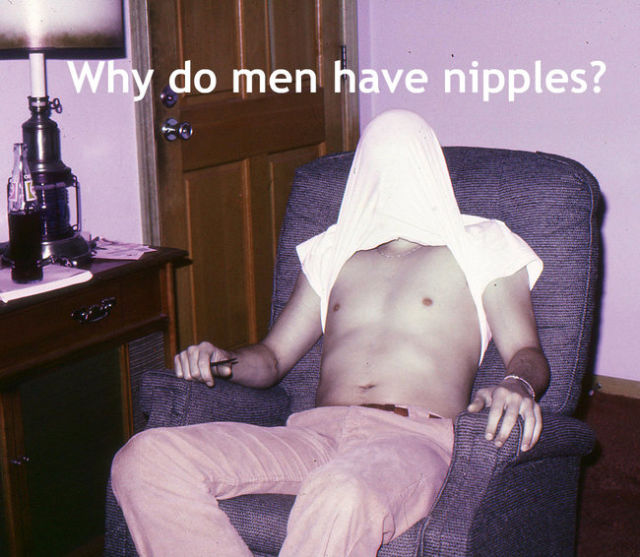 Because females are the superior gender. No really. Everyone starts as a female in the womb. "For the first several weeks a developing embryo follows a 'female blueprint,' from reproductive organs to nipples," explains LiveScience. "Only after about 60 days does the hormone testosterone kick in (for those of us with a Y chromosome), changing the genetic activity of cells in the genitals and brain. But by then those mammary papillae aren't going anywhere." Girl power.

gigantes 5 year s ago
#17 it's more than just that. men have nipples because they have breasts. men have breasts (mammaries) because they're mammals. the mammaries do in fact work when suckled upon sufficiently.
Reply