The Spectacular Sights of Our Amazing Planet (22 pics)

Massive beams of selenite dwarf explorers in the Cave of Crystals in Naica, Chihuahua, Mexico, March 18, 2008. Some single gypsum crystals in this cave are 36 feet long and weigh 121,200 pounds, some of the largest natural crystals ever found. 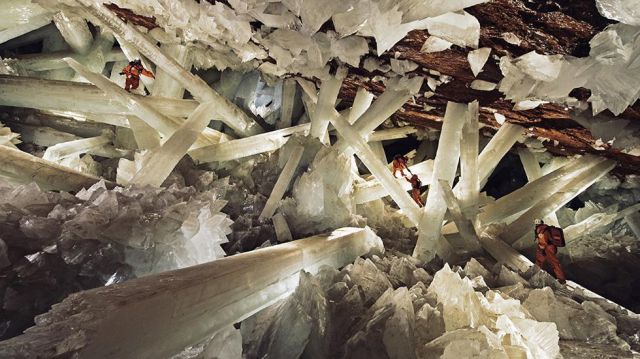 The Door to Hell is a natural gas field in Derweze, Turkmenistan and is known for its natural gas fire which has been burning continuously since it was lit by Soviet petrochemical scientists in 1971. 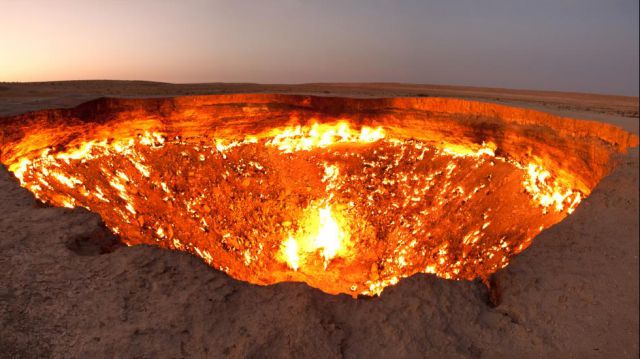 Yueyaquan is a crescent-shaped lake in an oasis, south of the city of Dunhuang in Gansu Province, China. The depth of the lake, a popular tourist spot, had decreased over the years as sand encroached on the site but in 2006, the government started to fill the lake and restore its depth. 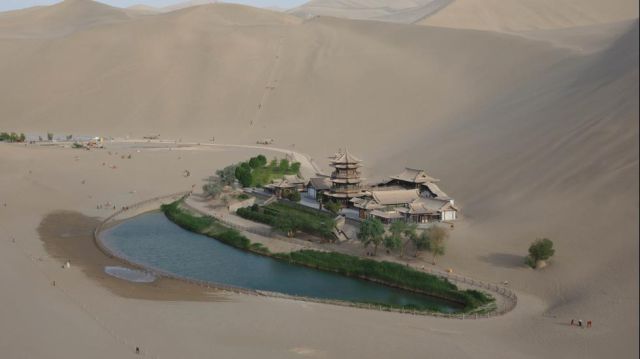 Located in the northwest Indian Ocean, Socotra features a vast, craggy and alien-like landscape and is home to unique flora and fauna found nowhere else. The archipelago is especially known as the home to dragon’s blood trees (Dracaena cinnabari), trees looks like an upturned umbrella. 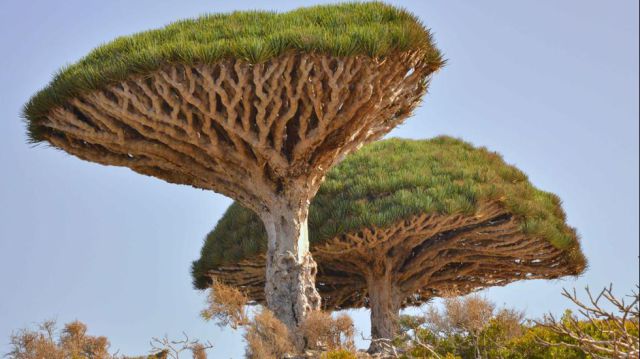 Is it a desert? Comprised of large, white, sweeping dunes, Lençóis Maranhenses in Brazil looks like a desert–but it’s not. Located just outside the Amazon Basin, the park is subject to rainfall at the beginning of the year, resulting in blue, green and black ‘lagoons’ surrounded by the desert-like sand. 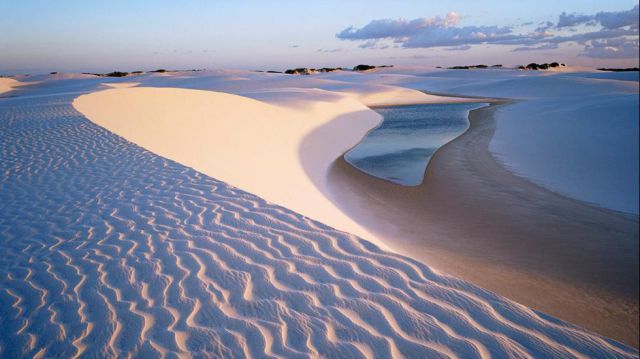 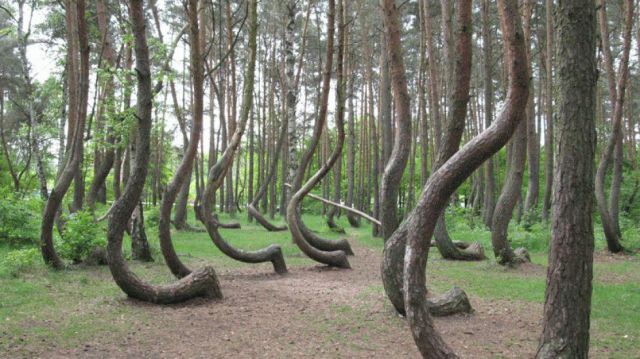 A large submarine vertical cave measuring 984 feet in diameter and 407 feet deep, the Great Blue Hole (also known as Lighthouse Reef) is believed to be the largest of its kind. Made famous by Jacques Cousteau, who declared it one of the top ten scuba ping sites in the world, the site draws pers from all over. 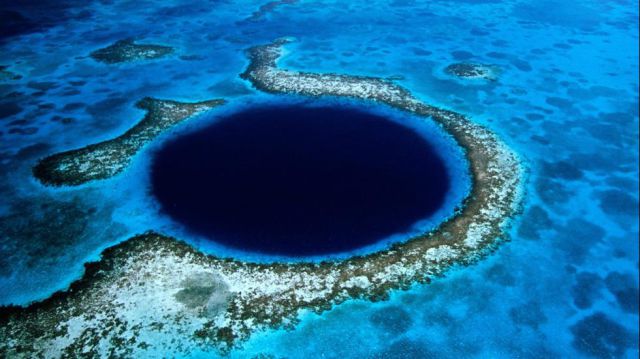 A popular tourist destination in the Tasman Bay off the northern coast of the South Island of New Zealand, Split Apple Rock is a geological rock formation, made of granite and in the shape of an apple which has been cut in half. The cleft to produce two sides of the ‘apple’ was a natural occurrence, but it is not known when this happened. 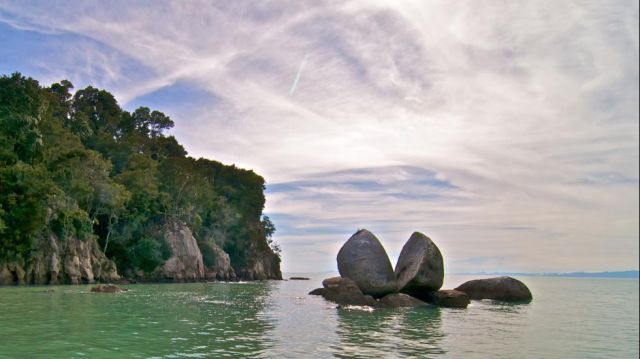 Hidden in a remote area of Russia’s Komi Republic, in the northern Ural mountains, the mysterious Manpupuner rock formations tower over 200 feet over the northern Siberian landscape. The seven gigantic stone pillars were sculpted by the weathering effects of ice and wind. In 2013, Red Bull athlete Stefan Glowacz became the first man to climb the Seven Giants. 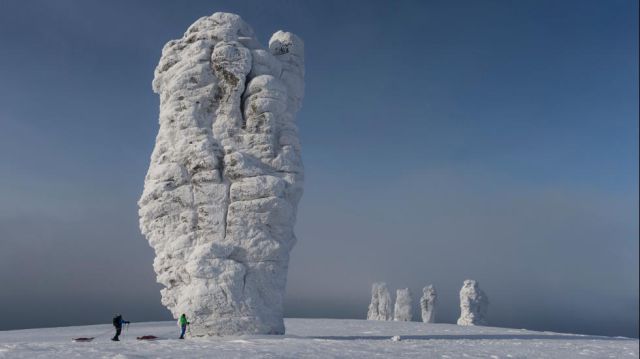 Eye of the Sahara, Mauritania

The Richat Structure, also known as the Eye of the Sahara, is a prominent geological circular feature in the Sahara desert in Mauritaniae. Visible from space, it has a diameter of almost 30 miles, and has become a landmark for shuttle crews. Initially interpreted as a meteorite impact structure, it is now argued to be a highly symmetrical and deeply eroded geologic dome that collapsed. 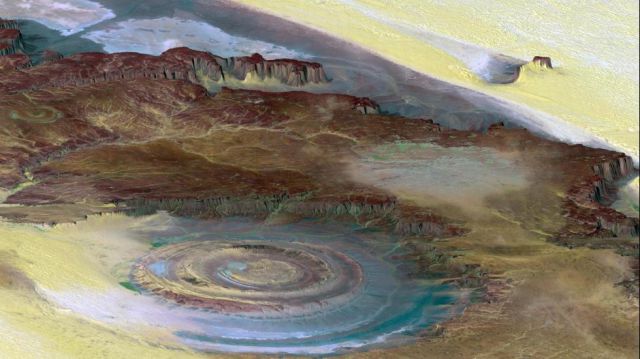 A general view of the Tianzi Mountain at Zhangjiajie national park in Zhangjiajie, China. Zhangjiajie is home to striking sandstone and quartz cliffs and its mountain formations are famously known for as the inspiration for the fictional world ‘Pandora’ in the film, ‘Avatar’. 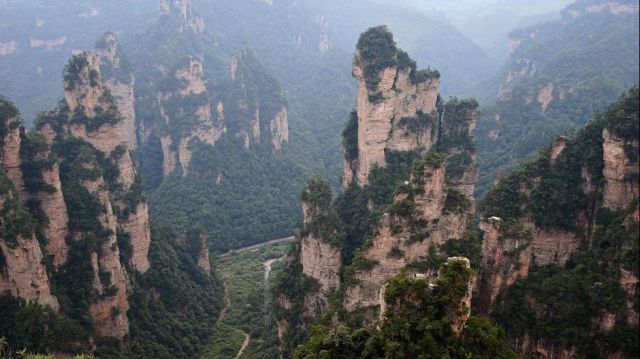 At Red Beach in Panjin (about 300 miles northeast of Beijing), China, a unique variety of alkali-tolerant seaweed will turn from green to a vibrant crimson red in the fall, to the delight of tourists who flock to the wetland. 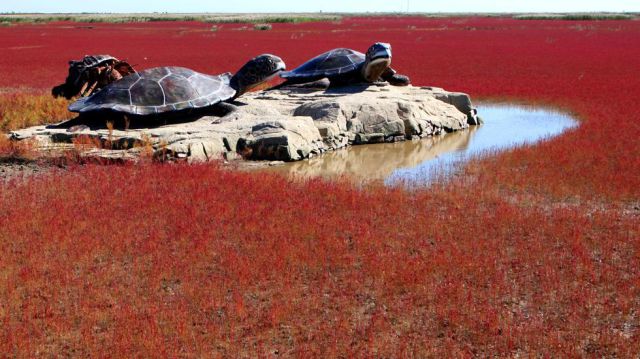 The Moreaki boulders are huge spherical boulders scattered along Koekohe Beach in New Zealand. According to Maori legend, the boulders are eel baskets washed up from an enormous, sunken canoe. Scientists explain the boulders as calcite concretions formed about 65 million years ago. 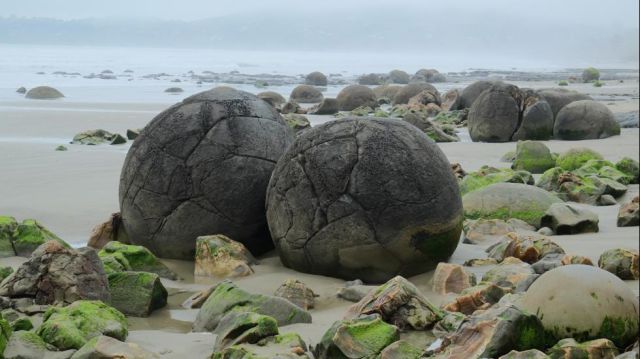 Gateway to the underworld? Located in Florence, Oregon near Cape Perpetua, Thor’s Well is a gaping sinkhole in Cook’s Chasm with waves that can reach a height of 20 feet. While beautiful, the natural wonder can be dangerous. Sharp rocks are everywhere and a strong surge of water could suck you down into the abyss. 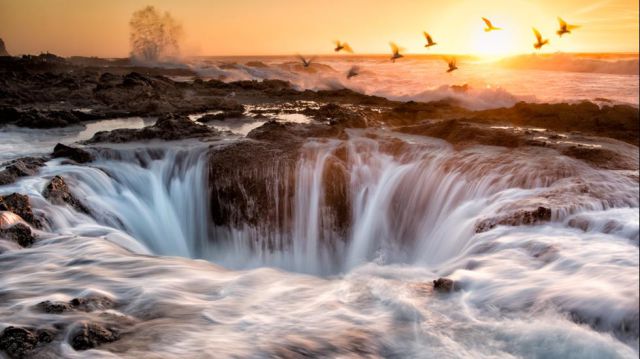 Avenue of the Baobabs, Madagascar

Near the city of Morondava in western Madagascar lies a surreal forest of majestic baobab trees, jewels of the island country’s landscape. Tourists flock to this famed road, a protected zone, where the baobab, often called the ‘upside down tree,’ reaches a height of up to 80 feet tall and are up to 800 years old. 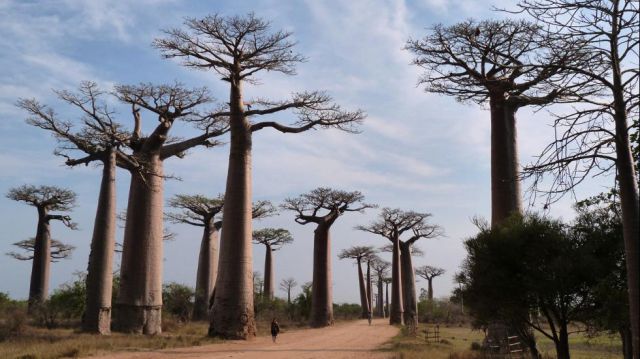 Located on the uninhabited island of Staffa, Fingal’s Cave has a unique, cathedral-like structure and hexagonal columns, according to the National Trust for Scotland. The cave was immortalized by Mendelssohn in his Hebrides Overture, after he visited the island in 1829. 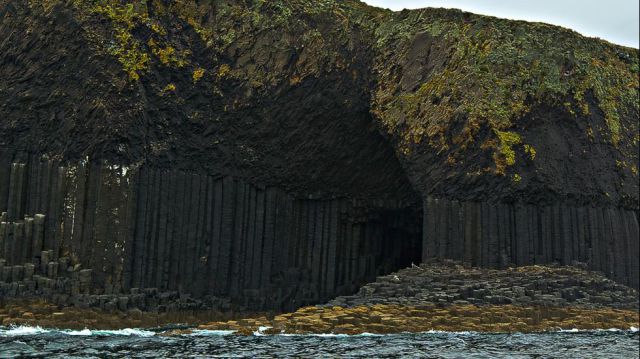 Located northwest of Osoyoos in British Columbia in Canada, Spotted Lake contains extremely high concentrations of minerals. Most of the water in the lake evaporates over the summer, leaving behind all the minerals in ‘spots.’ 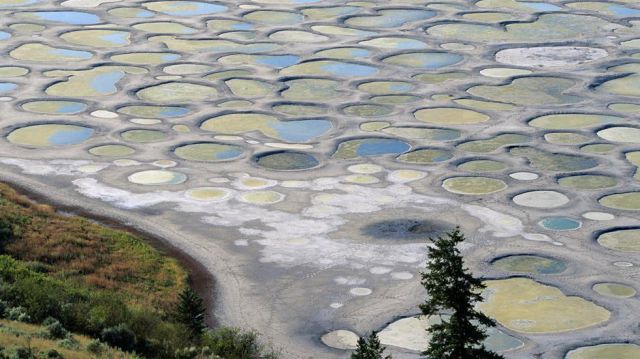 The Marble Caves (Cuevas de Mármol) are located on a peninsula of solid marble bordering Lake General Carrera, a remote glacial lake that spans the Chile-Argentina border, according to Atlas Obscura. The patterns that give the marbleized effect were caused by 6000 years of wave erosion. 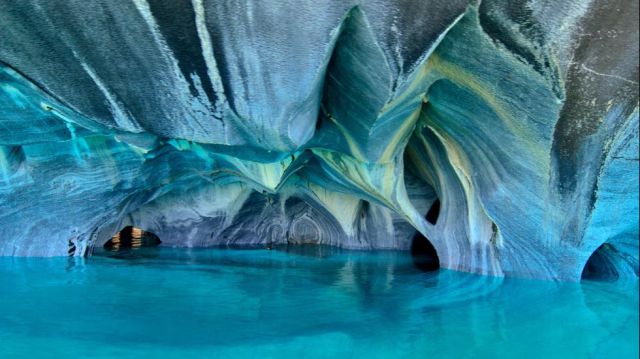 The Devils Postpile formation, located in extreme northeastern Madera County in eastern California, is a rare sight in the geologic world and ranks as one of the world’s finest examples of columnar basalt. Its columns tower 60 feet high and display an unusual symmetry. 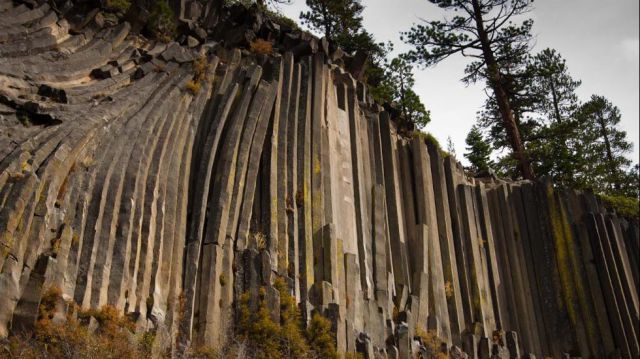 Naturally illuminated by thousands of glowworms, the Waitomo Glowworm Caves are accessible to visitors via a boat ride. 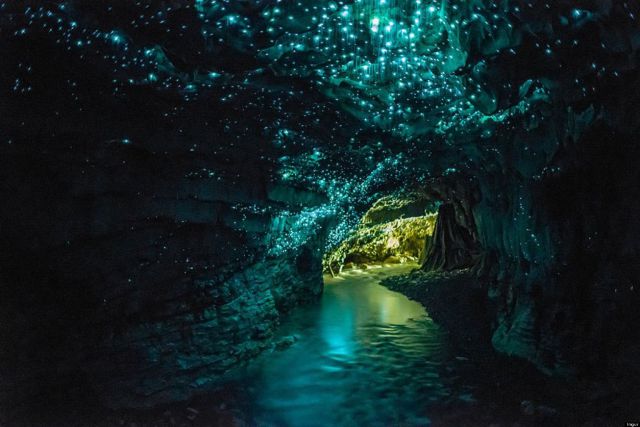 The Chocolate Hills are an unusual geological formation in Tagbilaran, Bohol, Philippines. According to a survey, there are 1,776 hills spread over an area of more than 20 sq. mi. covered by green grass that turns brown (resembling chocolates) during the dry season. 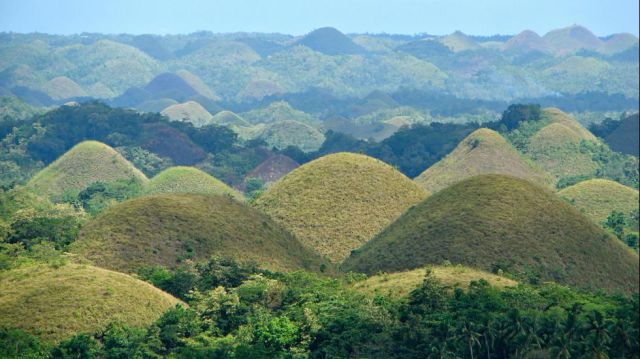 Located in the Waiotapu geothermal area in the North Island of New Zealand, Champagne Pool s a 900-year-old hot spring that bubbles with carbon dioxide like a glass of sparkling wine. The bubbles are carbon dioxide. The distinctive orange color around the edge is caused by the minerals orpiment and realgar, both sulfides of arsenic. 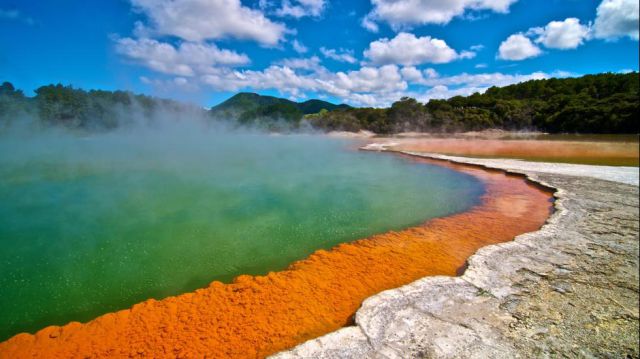