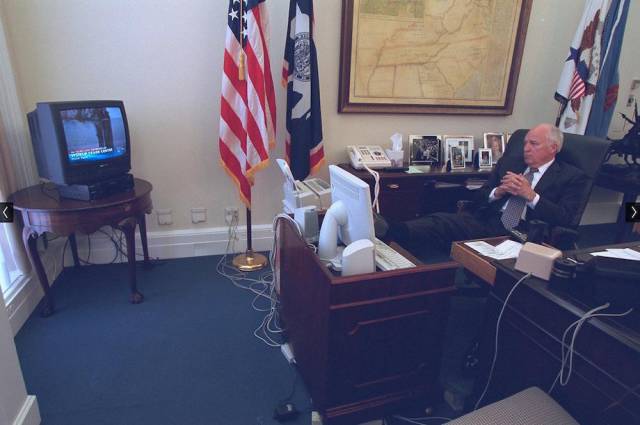 Vice President Cheney talks with the Chief of Staff I. Lewis ‘Scooter’ Libby as the World Trade Center Burns on TV.
2 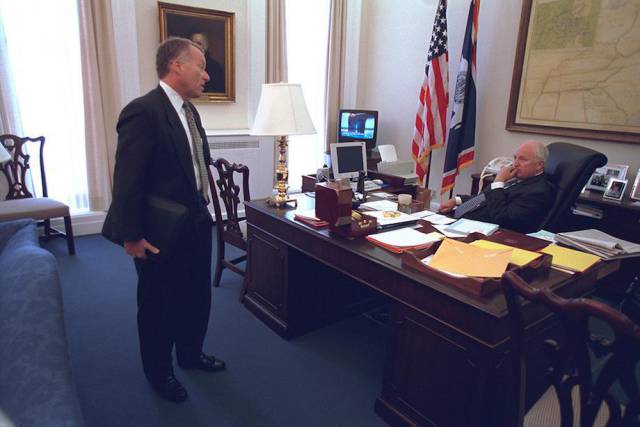 Cheney watching President Bush addressing the nation from Emma E. Booker Elementary school. Within minutes he would be frog-marched by Secret Service agents to the basement elevator of the White House.
3 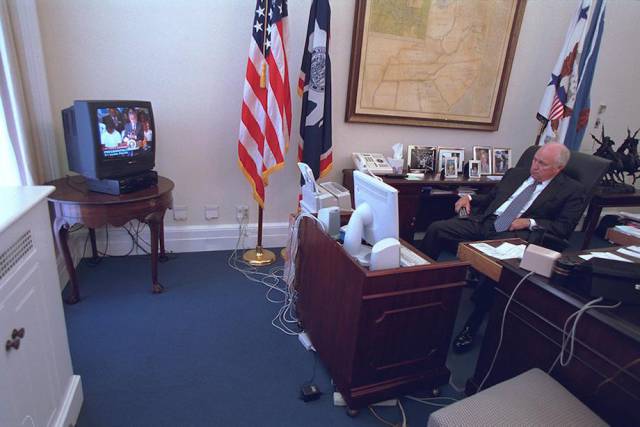 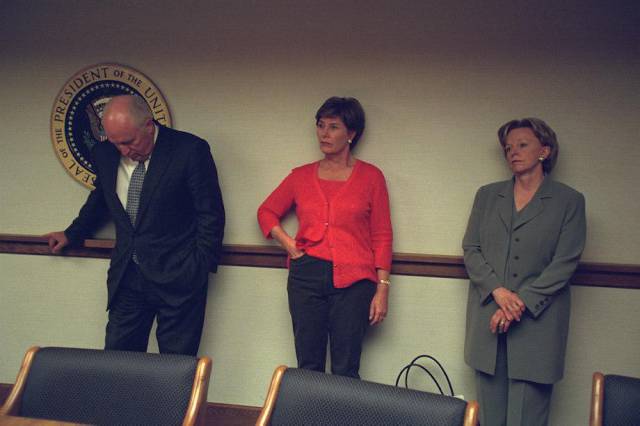 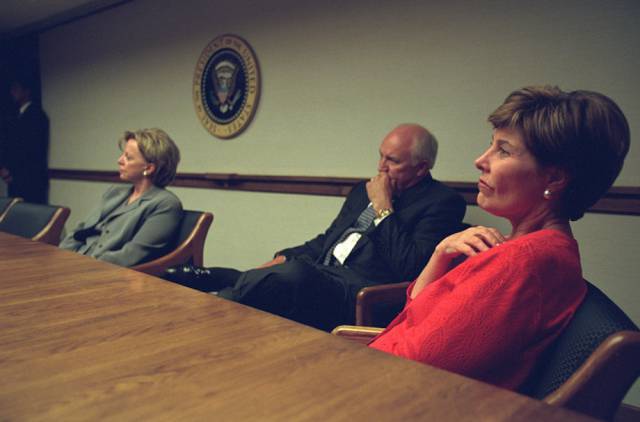 Cheney made a series of calls from the PEOC, including calls to the Secretary of Defense Donal Rumsfield. Terrorists had just attacked the Pentagon at 9:37 A.M.
6 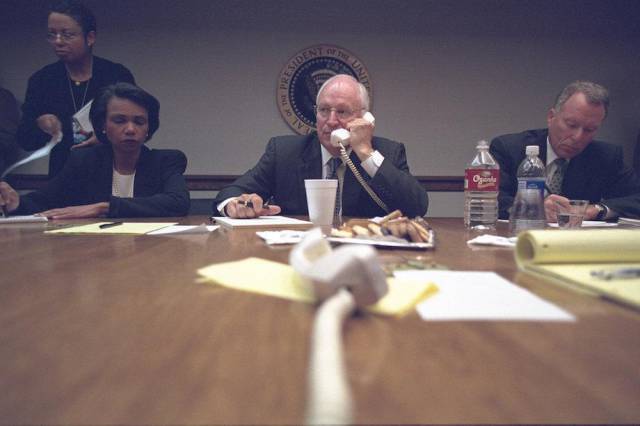 National Security advisor Condoleezza Rice join Cheney in the PEOC. Throughout the morning they were receiving reports of airplanes headed toward the White House.
7 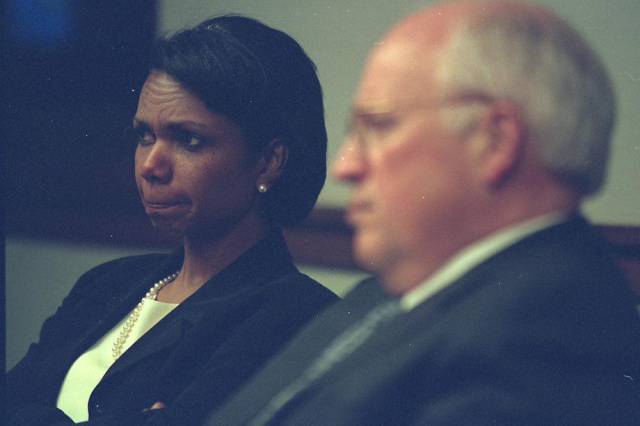 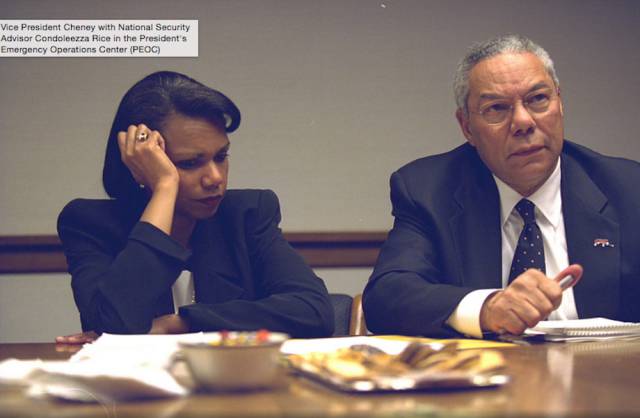 The Vice President’s top lawyer, David Addington, conferred with Cheney. Addington would begin to secure the legal authority to respond to the attacks.
10 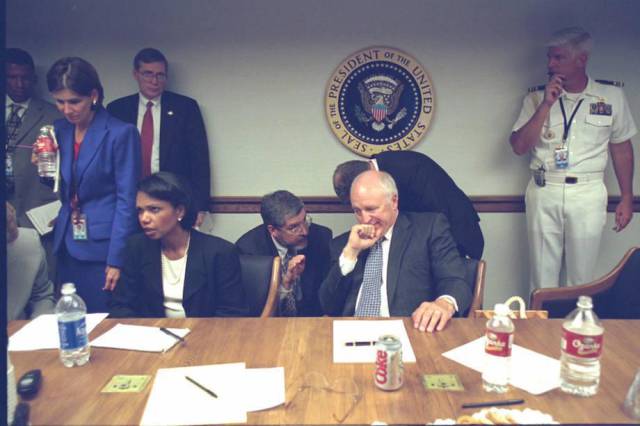 Those in the room that day say the attacks had a profound effect on Cheney and shaped his entire time in office.
11 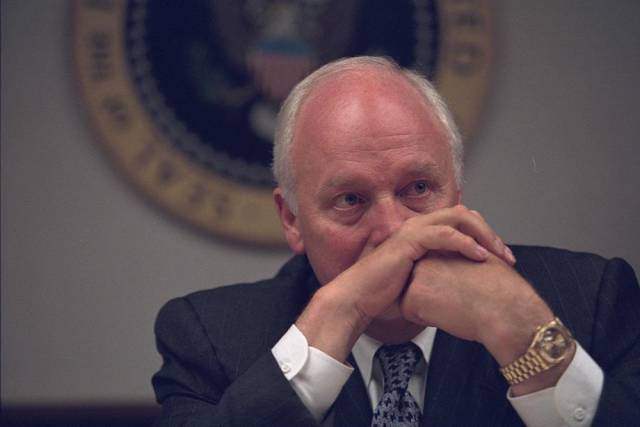 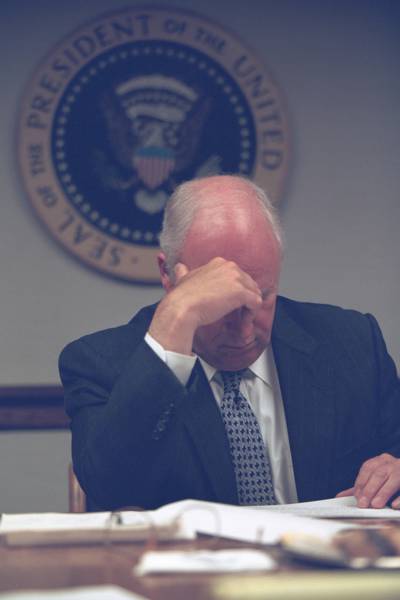 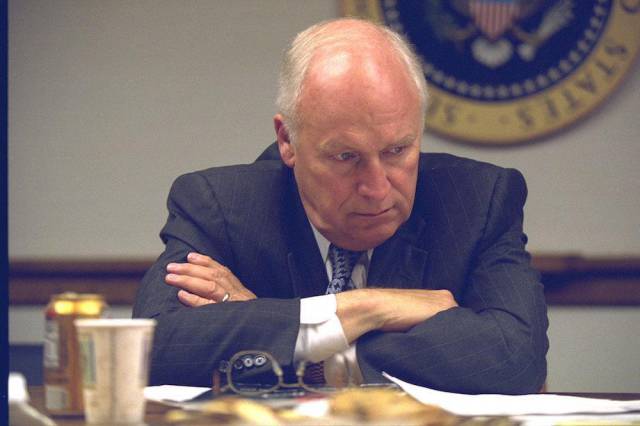 Cheney confers with President Bush, who had arrived at the PEOC around 7:00 P.M. After his plane was diverted to Louisiana and Nebraska.
14 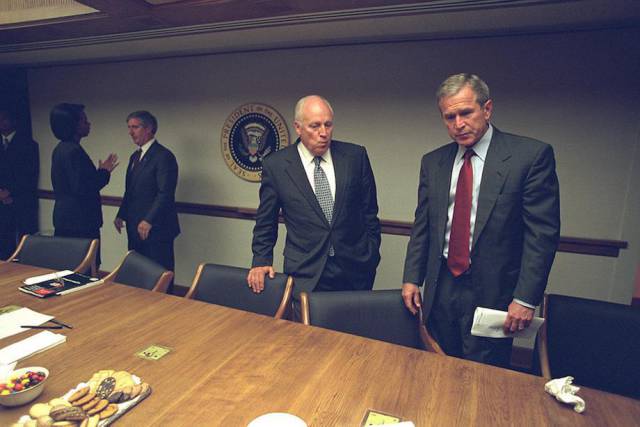 Prior to addressing the nation, Bush is briefed by Chief of Staff Andrew Card, Cheney and Rice.
15 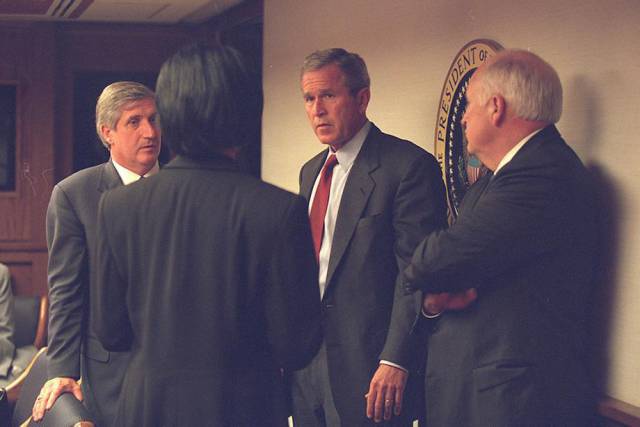 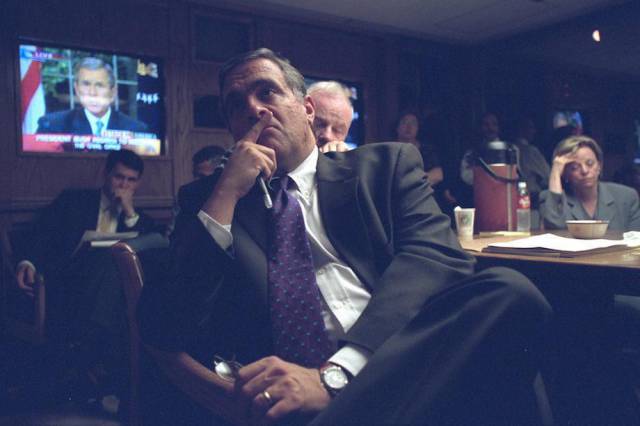 Tenet and FBI Director Robert Mueller watch as President Bush promised the nation that the Government would go after “The Terrorists who committed these acts and those who harbor them”.
17 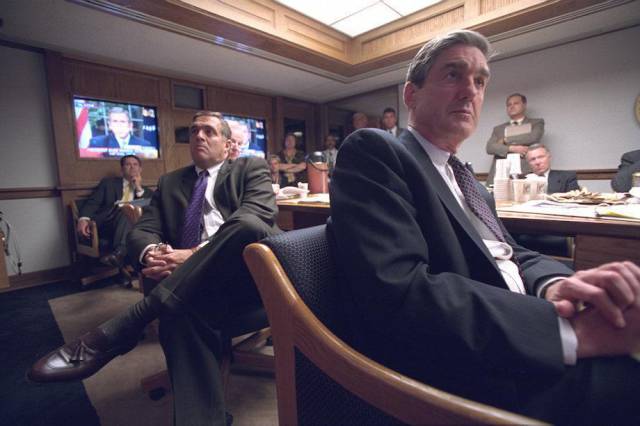 The Cheneys leave the White House for an ‘undisclosed location’.
18 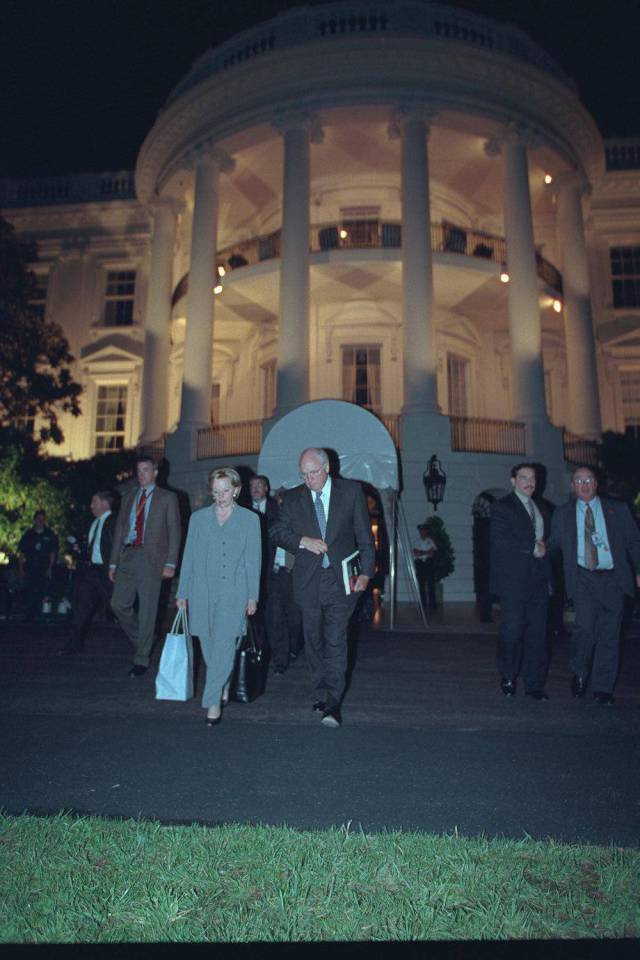 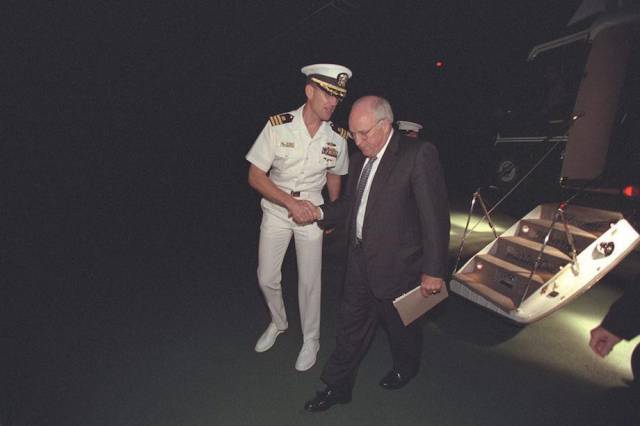 Marine Two takes off with the Cheneys.
20 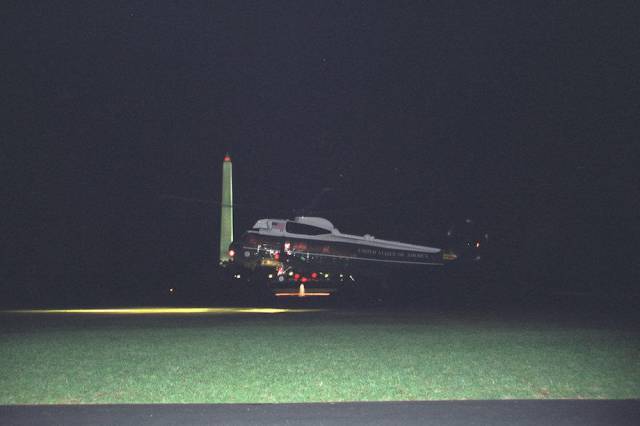 Moving the Vice President is part of a Secret Service plan to preserve the continuity of leadership.
21 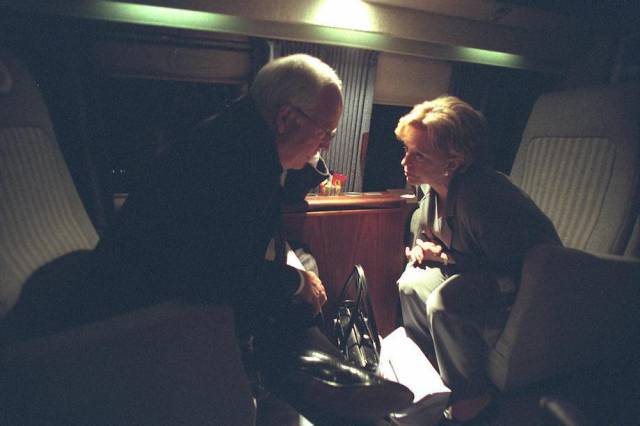 peter.morley.39904 5 year s ago
Just looking at that corrupt piece of crap Cheney makes my skin crawl. He epitomises everything that is wrong with the US.
Reply