In 1964, French photographer Robert Serrec spotted and took a quick picture of what resembled a giant snake-like creature resting on the sea floor off the coast of Queensland, Australia. Some sources claimed it could have been a long tarp or something similar. However, no credible explanation has ever been found for this bizarre photo.
1 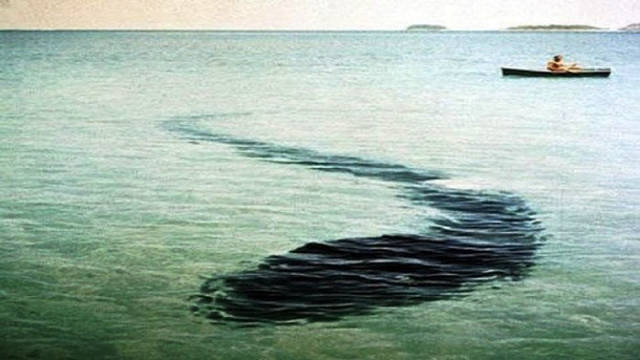 Since the 1940’s (possibly earlier) there has been a strange light phenomenon observed in the Hessdalen Valley, Norway. The spectacle has a form of white or yellow light of unknown origin standing or floating above ground level. Between 1981 and 1984, the lights were observed up to 20 times per week but have drastically reduced in frequency since then to about 10–20 times per year. Despite ongoing research and numerous working hypotheses, there is no convincing explanation of the origin of these lights.
2 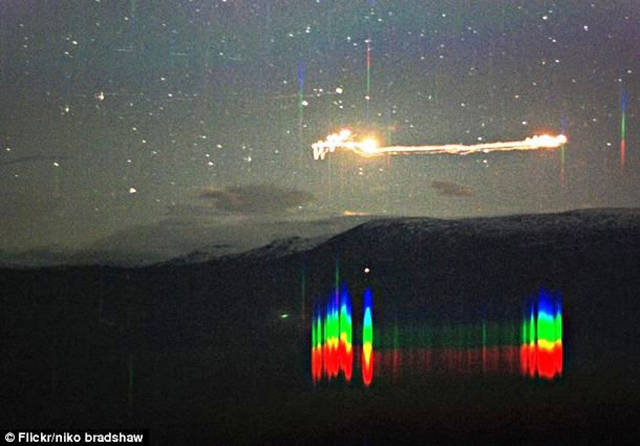 Back in the 1950´s, the Cooper family from Texas moved into their new house. Once there, they took a family photo but when the picture was developed, the image of a body falling from the ceiling was clearly visible. As further investigation on this story has brought no plausible explanation, there exist many speculations; including one that argues that the shadow is the ghost of the previous owner of the house.
3 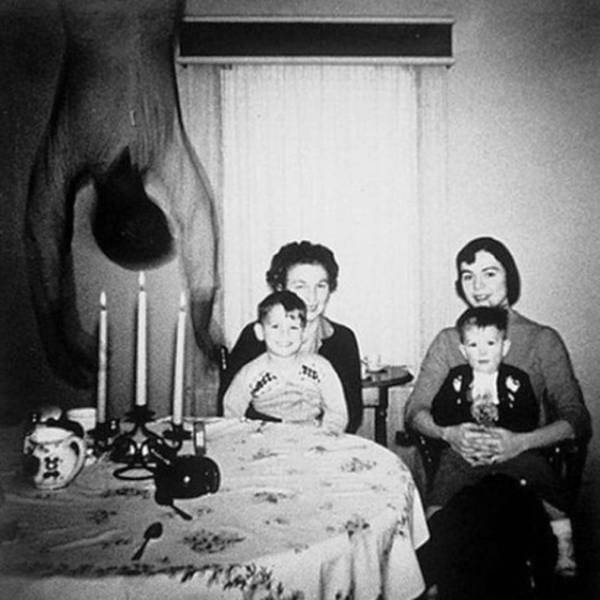 On footage from a Charlie Chaplin´s promotional film shot in 1928, there is a woman who appears to be talking into a cell phone. Needless to say, back in the 1920´s mobile phones were yet to be invented. Nevertheless, even the lady´s gestures and behavior is eerily familiar to what we see on the streets nowadays.
4 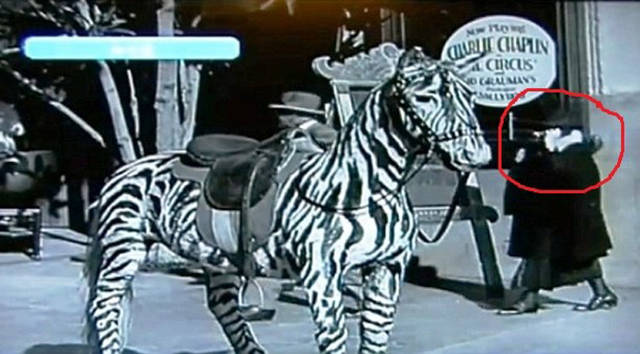 In 1967, Stefan Michalak reportedly encountered an unidentified flying object near Falcon Lake, Canada. Michalak was close enough to touch the object but then, it suddenly lifted off, knocking him on his back. Michalak claimed to have been burnt by the object´s exhaust vent that was covered with a grid. The hot gases even left burn marks on his chest as it can be seen in the photo. After this bizarre accident, Michalak got very sick, suffering from symptoms typical of radiation but the nature of the burns has remained a mystery.
5 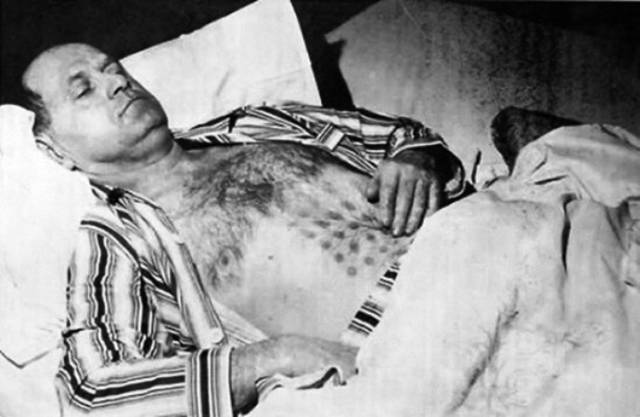 This ghostly figure was captured on a security camera at the Hampton Court, a royal palace located in the Greater London area. The figure appeared to be closing one of the palace´s doors but when the guards arrived at the place, nobody was there. As the palace has a long and violent history, the figure is believed to be one of several ghosts that are rumored to haunt the building.
6 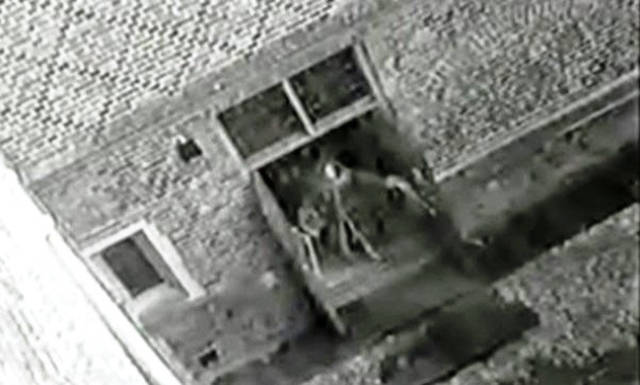 Found in the arid grasslands of the western part of Southern Africa, the fairy circles are circular patches of barren land. Typically occurring in monospecific grassy vegetation, the circles vary between 2 and 15 meters (7 and 49 feet) in diameter. The origin and history of fairy circles have long been a puzzle and even now, scientists are still not sure who or what create them. One favored assumption is that a sand termite is responsible for the circles, but the range of the phenomena is much wider than that of the termite species.
7 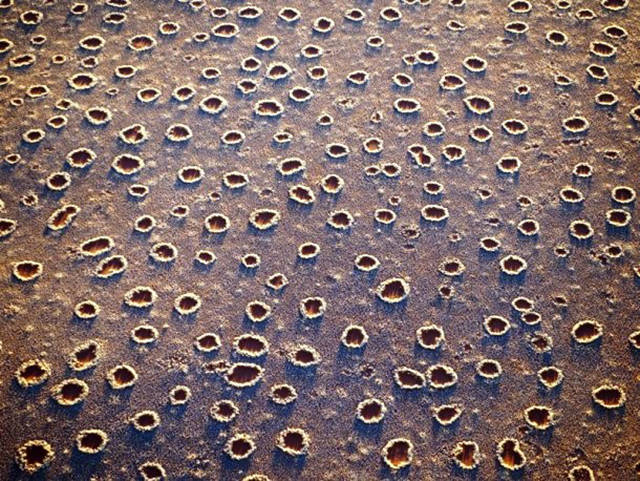 One of the world´s most famous mysterious photos, this image was taken by Jim Templeton near Solway Firth in Cumbria, England in 1964. Behind Templeton´s daughter who was supposed to be the only figure in the picture, there is another entity resembling a spaceman. But Templeton insisted he did not see anyone else present when the photograph was taken. Modern analysis suggested that the figure might have been the photographer’s wife, standing with her back towards the camera, but not even this explanation is convincing enough.
8 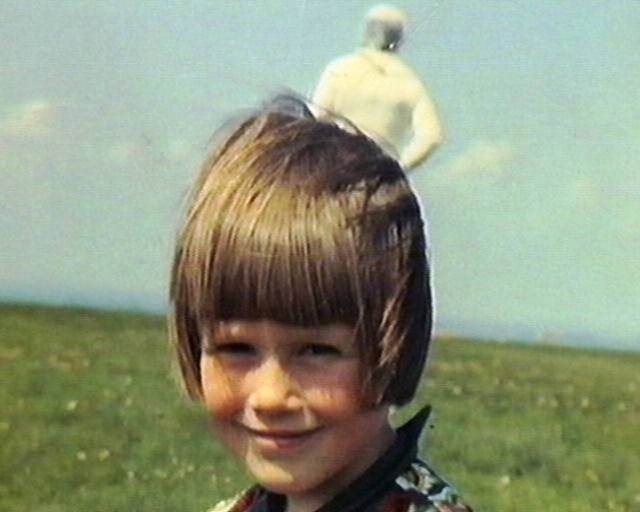 This image was taken by Apollo 17 in December 1972 during its flight to the Moon near the area known as Geophone Rock. NASA listed this image as “blank”. But after retouching the photo, you can see that is not completely blank. Turning up the contrast, a pyramidal structure can be observed. NASA has never given a credible version of the issue which has led to some speculations about what else can actually be on the Moon, hidden to public awareness.
9 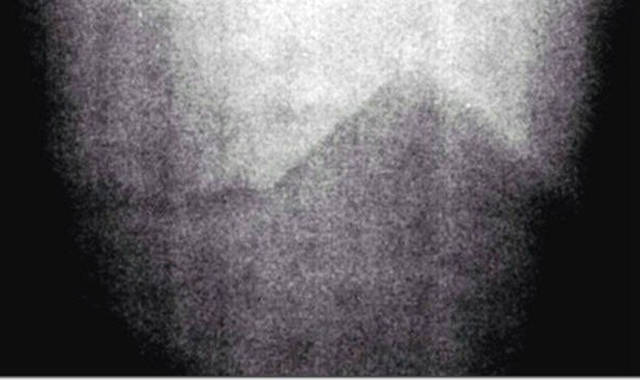 In 1919, Freddy Jackson was accidentally killed by an airplane propeller while working as an air mechanic. Two days later, his squadron took a group photo but when the photo was developed, Freddy Jackson was in the photo. The shocked crew confirmed that the man in the photo was indeed, Jackson. In fact, the picture was taken on the same day as Jackson’s funeral was held. It is believed that Jackson’s spirit was unaware of his death and showed up to have his picture taken as scheduled.
10 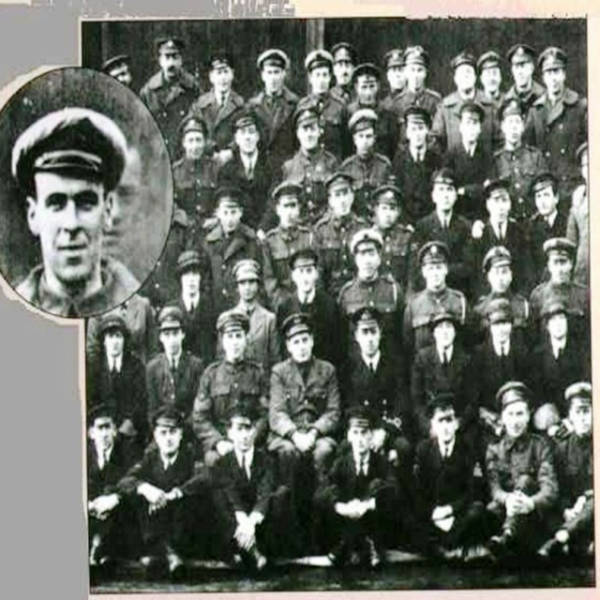 Rev. Ralph Hardy, a retired clergyman from White Rock, British Columbia, took this famous photograph in 1966. Originally, he only wanted take a picture of the elegant Tulip Staircase in the Queen’s House section of the National Maritime Museum in Greenwich, England. Upon development, however, the photo revealed a shrouded figure climbing the stairs. Experts who examined the original negative concluded that it had not been tampered with. The vicinity of the staircase is rumored to be haunted and unexplained footsteps have often been heard there.
11 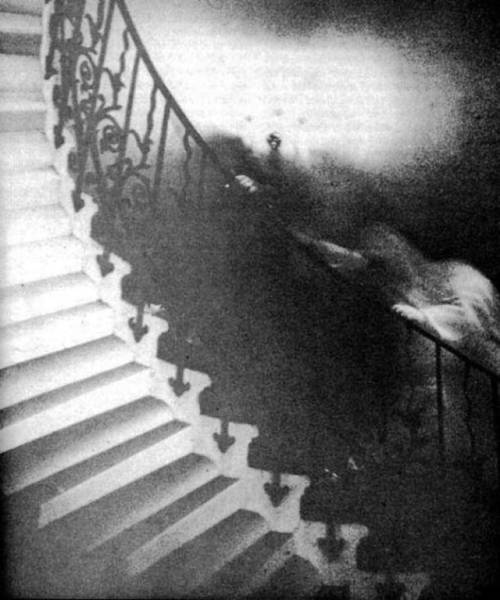 In March 1997, thousands of people saw strange lights of various descriptions. There were allegedly two distinct events involved in the incident: a triangular formation of lights seen to pass over the state, and a series of stationary lights seen in the Phoenix area. While experts have come up with several theories to explain this bizarre phenomenon, it is still not known what exactly those thousands of people actually saw on that day.
12 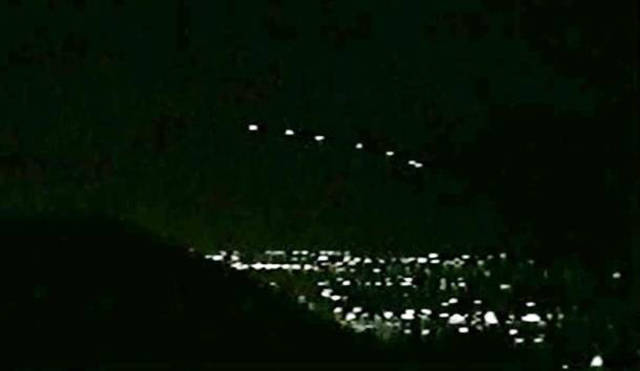 Also known as the Great Los Angeles Air Raid, the Battle of Los Angeles was a rumored enemy attack and subsequent anti-aircraft artillery barrage which took place from late 24 February to early 25 February 1942 over Los Angeles, California. According to some modern UFO-logists, the picture of the supposed attack that appeared in local newspapers back then might have actually shown an extraterrestrial aircraft.
13 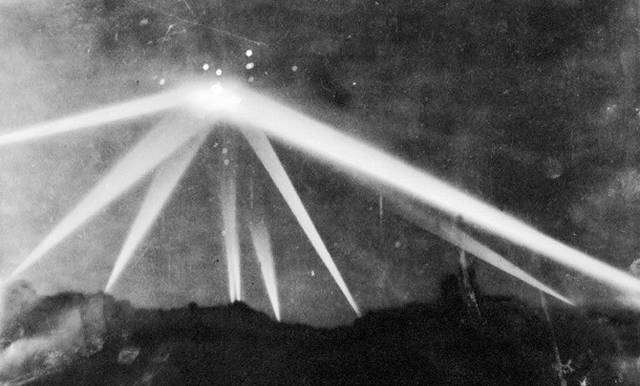 Another creepy story that happened in Los Angeles, the death of Elisa Lam has been a mystery since it happened in 2013. A 21 year old student, Lam was found dead in a rooftop water tank at the Hotel Cecil where she was staying. While it’s not entirely known how she got onto the roof which was barricaded at that time, there is a very bizarre video footage showing her in the hotel´s elevator on the day of her disappearance. In the footage, Lam is seen exiting and re-entering the elevator, talking and gesturing in the hallway outside, and sometimes seeming to hide within the elevator, which itself appears to be strangely malfunctioning.
14 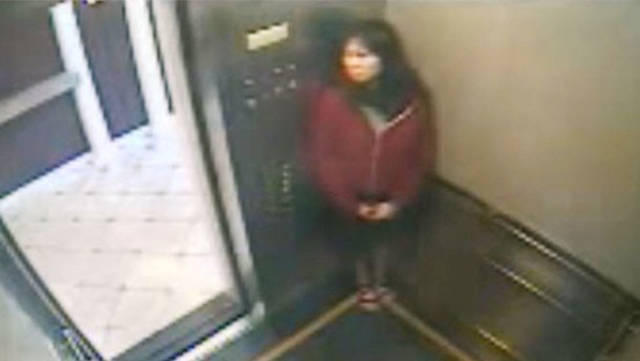 In a picture taken on the occasion of the re-opening of the South Fork Bridge in Gold Bridge, British Columbia in 1941, an alleged time traveler can be seen. It was claimed that his clothing and sunglasses were modern and not of the styles worn in the 1940s. The camera that the man is holding in his hands also looks inappropriately modern and advanced for that period. As the photo went viral on the internet recently, the man is now often referred to as time-travelling hipster.
15 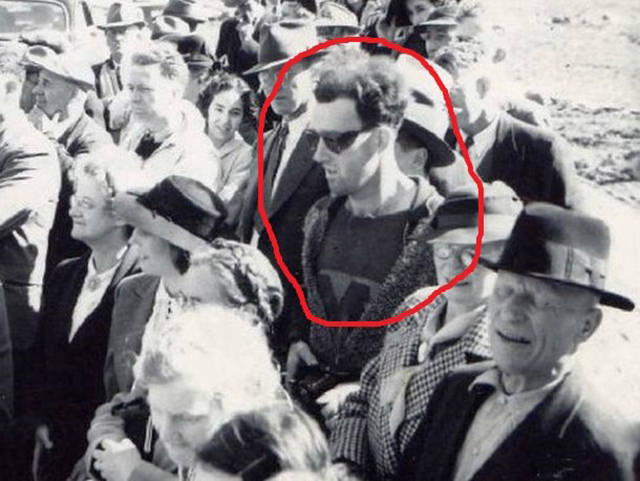 The Babushka Lady is a nickname for an unknown woman present during the 1963 assassination of President John F. Kennedy. As she was seen to be holding a camera, she might have photographed the events during the assassination. Even though the shooting had already taken place and most of her surrounding witnesses took cover, she can be seen still standing with the camera at her face. Neither she, nor the film she may have taken, has yet been positively identified.
16 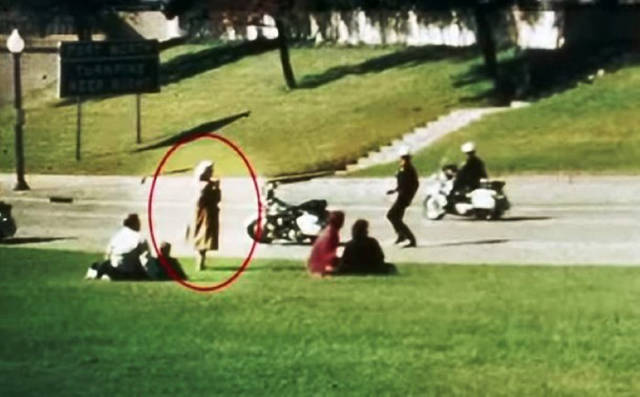 Sometimes also referred to as the Mekong lights, the Naga fireballs is a strange natural phenomenon with unconfirmed source seen on the Mekong river in Thailand and Laos. In the phenomenon, glowing reddish balls are alleged to naturally rise from the water high into the air. There have been several attempts to scientifically explain the Naga fireballs but none of them came up with any reliable solution.
17 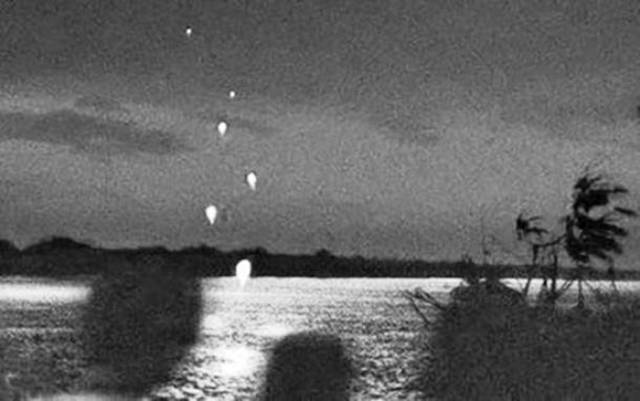 In this picture, a woman is standing on the edge of the demolished South Tower as it was hit by an airplane in the 9/11 terrorist attack. Waving and probably calling for help, the woman obviously survived the initial attack but it is unclear how she made it or what happened to her after.
18

In December 1924, James Courtney and Michael Meehan, crew members of the S.S. Watertown, were cleaning a cargo tank of the oil tanker when they were overcome by gas fumes and killed. The crew buried them in the sea but to their astonishment, the ghostly faces of the soldiers appeared in the water on the next day. Later on, many other crew members reported to see the faces as well. The faces were so visible that the captain of the ship ordered to take a picture of them. The negative was even checked for fakery and proclaimed genuine.
19 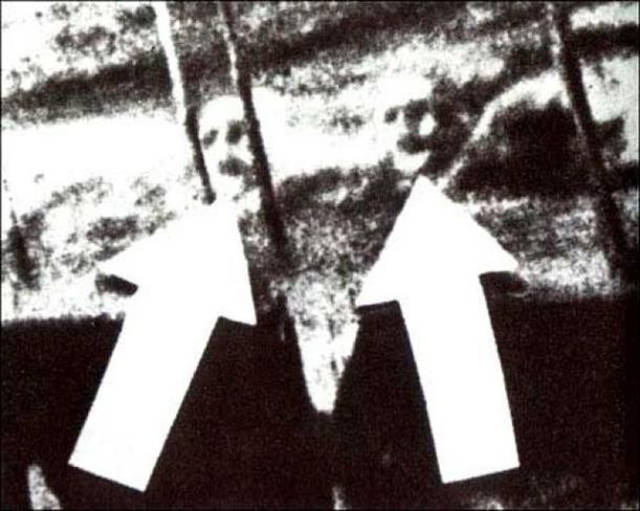 In 1975, Diane and Peter Berthelot visited the Worstead Church in north Norfolk, U.K. While in the church, Peter took a photo of his wife sitting and praying on one of the church benches but when they developed the film, they found out there was a bizarre ghostly figure sitting right behind Diane. When they got back to the church, a local vicar told them it was the White Lady, the ghost of a healer who was believed to haunt the church.
20 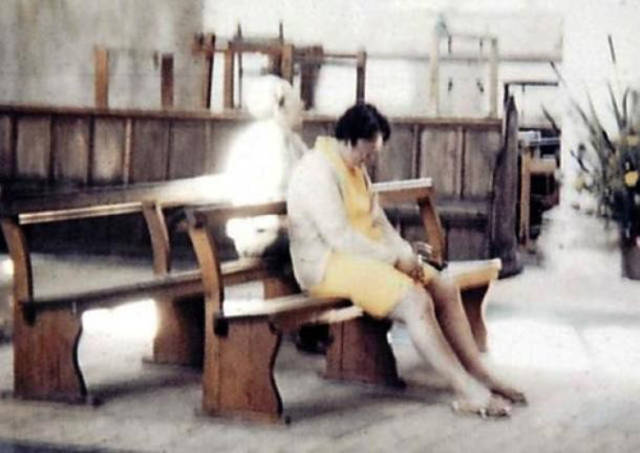 Dean Corll, later known as the Candy Man, was a serial killer who abducted, raped, tortured and killed 28 young boys between 1970 and 1973. However, in 2012, 40 years after these gruesome crimes, a mysterious photo of a terrified handcuffed boy was found in one of Corll´s accomplice´s possession. As scary as the photo itself was, things got even more agonizing when it was found out that the boy in the photo was not any of the original 28 kids…
21 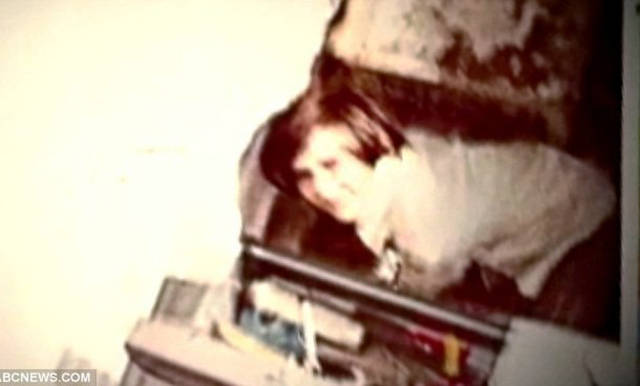 In 1991, several members of the Ghost Research Society investigated the Bachelor´s Grove cemetery outside Chicago that is generally considered one of the most haunted places in the US with over a hundred of reports of various supernatural phenomena. One of the members took a picture of the cemetery that was empty at that time but when they looked at the photo, they saw an image a white ghostly figure sitting on a tombstone.
22 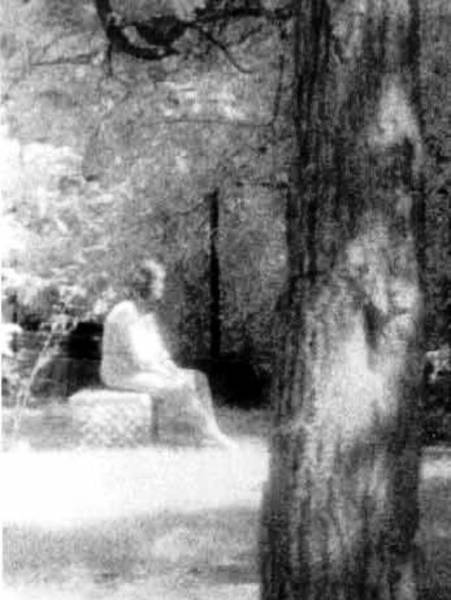 In 1954, newspapers including the St. Louis Post Dispatch and the San Francisco Examiner ran stories attributed to retired naval aviation major and UFO researcher Donald Keyhoe saying that the US Air Force detected two satellites orbiting Earth. At this time, however, no one had the technology to launch a satellite, which has led to many speculations about the origin of the object. Some conspiracy theorists believe it is a 13,000 year-old satellite of extraterrestrial origin. It is commonly referred to as the Black Knight Satellite.
23 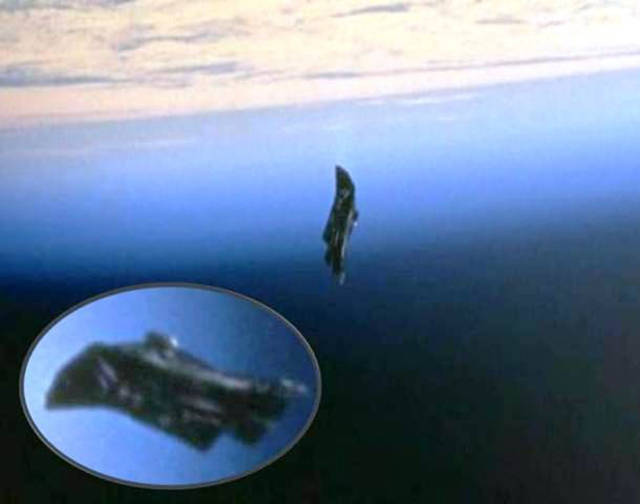 One of the most recent photos that have baffled many internet users, this seemingly ordinary photo shows four youngsters posing for the shot. But if you look carefully, you will notice there is what appears to be an extra thumb next to the kid in black on your right. The boys as well the person who took the picture claimed they had no idea whose thumb that was.
24 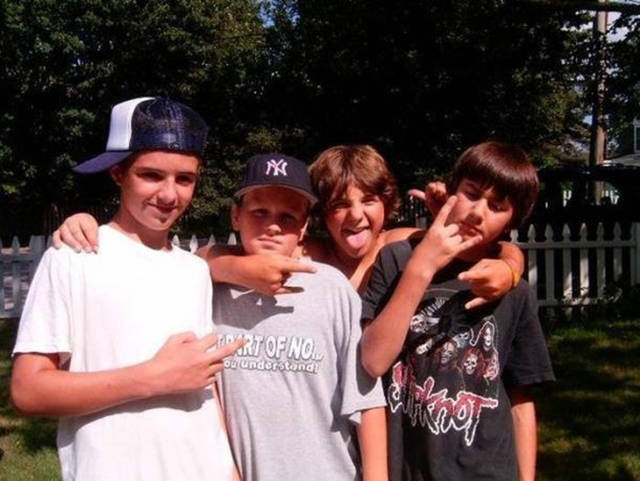