These Are The World’s Hottest Sets Of Twins, Triplets And Quadruplets (15 pics)

Look at them and tell me I’m wrong.

The internet has gone gaga over Russian DJ’s Kristina and Anya Grushin. For a long time their identity remained a mystery, because even on Facebook they were known only as “The Russian Twins”. But their Angelina Jolie-esque faces were plastered all over any profile they made, and eventually, their names got out. No one knows why they kept their identity private; perhaps it added to the mystery and intrigue that goes so perfectly with their looks? Even now it takes a lot of searching to find out who these two 23-year-old beauties are. Kristina and Anya are now models based in Mexico City. 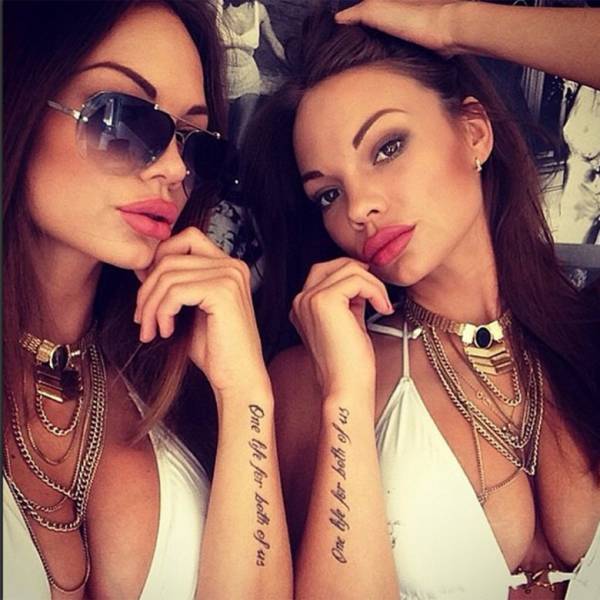 If you follow wrestling in any capacity, you are likely to have heard of these drop dead gorgeous twins. Brie and Nikki are models, actresses, and pro-wrestlers currently signed to WWE. And both are in relationships with some of WWE’s biggest male stars: Brie is married to Daniel Bryan, and Nikki is in a long-term relationship with John Cena. Originally from Scottsdale, Arizona, the sexy duo have been a part of several reality television shows, WWE video games, and awards shows. 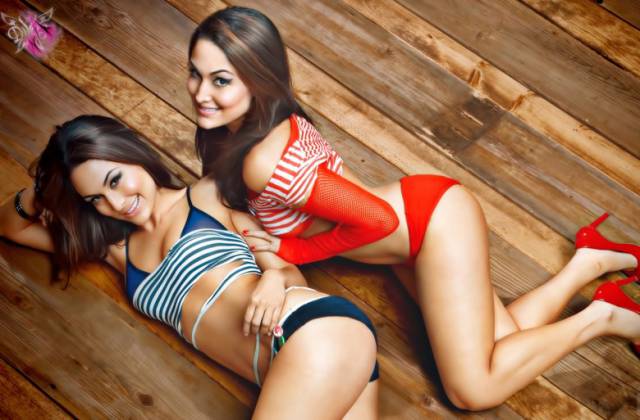 Alison, Nicola, and Laura Crimmins are identical Irish lasses from the Isle of Man, an island between Great Britain and Ireland in the Irish Sea. The 29-year-old blonde bombshells have been modeling since they were 16. They’ve also done TV work, photo shoots, press calls, and advertisements for various projects. Presently, the sisters continue to model for agencies in both Ireland and the U.S., and also work in the beauty field. 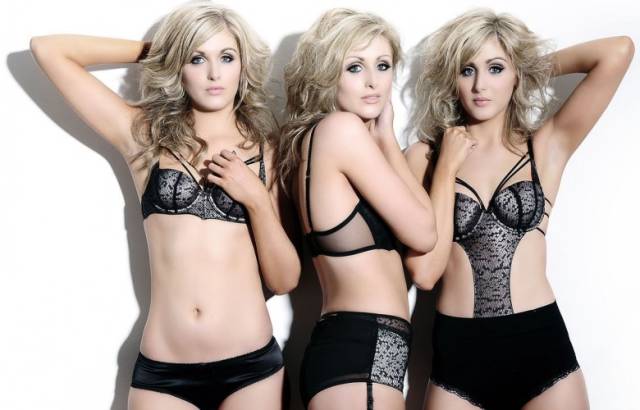 Camila and Mariana Davalos were born in Lexington, Kentucky and began modeling at age 10 while living in Colombia. Their career kept evolving, and now at 27 they are classified by some as the best lingerie models on the catwalk. Like Kim Kardashian, they are well-known for their butts. They were also once hostesses of a show called Rumbas de la Ciudad, or City Parties. Camila is more outgoing and loves modeling for the cameras, makeup, and fashion, while Mariana is more introverted, and for her, the biggest upside is the paycheck. She remains in Medellin, Colombia, and Camila resides in Miami, Florida with her son. 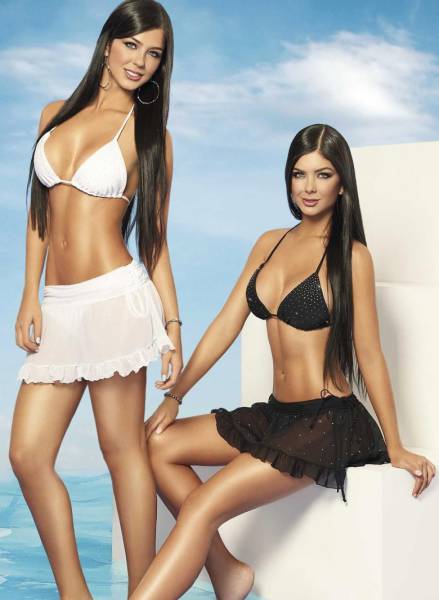 Now 28, Bia and Branca Feres are famous former synchronized swimmers. They started lessons in gymnastics when they were 3, and swimming when they were 7. Combining the two led the girls to rise to the top of the synchronized swimming world, where they remained until 2011 when it is rumored that they said goodbye to that life due to age, pursuing other things, and because they got breast implants. They also are models, actresses, and MTV presenters. However, there has been some controversy surrounding the sexual nature of their photographs, where at times they can even be seen touching each other in lingerie and swimwear. 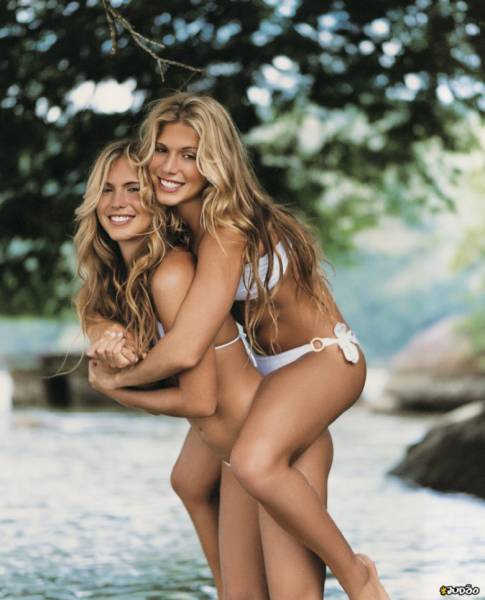 Samantha and Teagan Rybka are twin acrobats, dancers, athletes, and contortionists from Perth, Australia. They began learning acrobatics at the age of 3, and dance at the age of 6. Their mother was a former acrobat, herself. They grew up studying their art form at the Debra McCulloch Dance Academy, and all their hard work paid off when they made it impressively far into the seventh season of Australia’s Got Talent. They also gained notoriety for a YouTube video they posted called “Rybka Twins – Dancers Leggo!” Sam and Teagan are now 20. 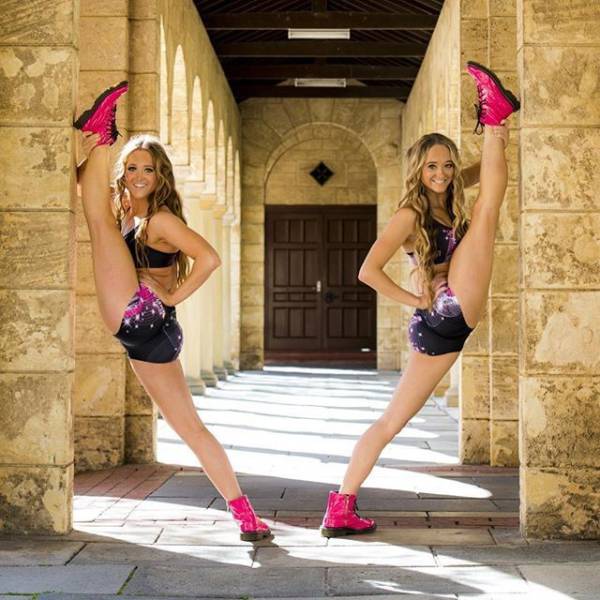 The Akse Quadruplets – The Netherlands

The Netherlands is a small country of 17 million, and they have only one set of identical quadruplets: Tessa, Esme, Bo, and Lisa Akse. The foursome’s hometown is called Hardenberg, a small town in the eastern part of the country, and the pretty redheads starred in their own reality show there for quite awhile called “De Vierling”, or in English, “Quads.” All four have boyfriends, and while Lisa works in a hair salon, her sisters all studied social work. They are 23, and have a brother. 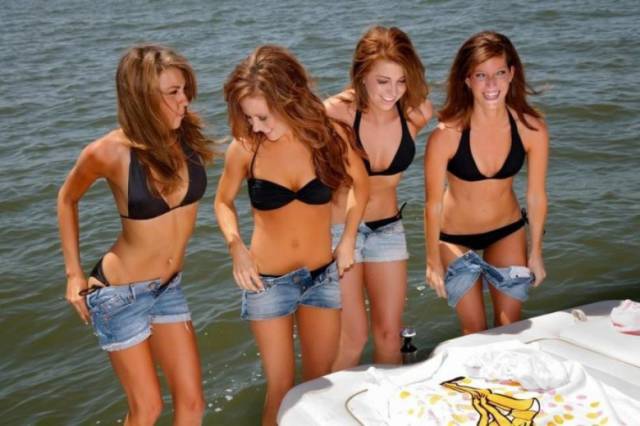 Originally from Witrogoscz in west-central Poland, sexy sisters Klaudia and Laura Badura now split their time between England and Dubai. They are bloggers, models, artists, and fashionistas. Currently they are both Lily Lashes Ambassadors, and have one other sister and brother. They have modeled for Playboy and performed in the adult entertainment industry, even with each other. The girls studied Art and Design at Harrogate College in The U.K. 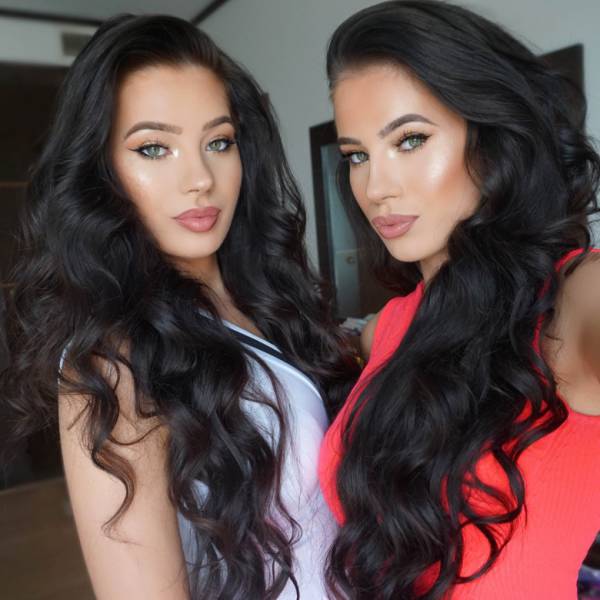 Together, Aleksandra, Izabela, and Monika Okapiec make up the pop group Alizma, a combination of their nicknames. They first came to the United States as foreign exchange students in Washington, D.C., where they earned their undergrad in Arts Management, and later in Los Angeles, their Master’s in Music with a specialty in violin performance. They have traveled the world performing, and have appeared on such shows as America’s Got Talent, Hannah Montana, and Last Call with Carson Daly. They say their message through music is a positive and inspirational one of staying true to who you are. 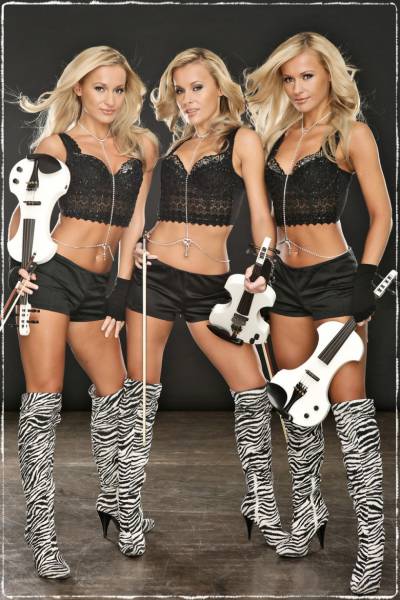 Nika, Nicole, and Natalie Taylor may look familiar to you because their band, Red Roots, is a famous American bluegrass gospel trio, whose lyrics reflect their values of faith and family. Now 25, their musical journey began at age 5 when they joined the church choir, and went on to learn to play the violin, banjo, bass, mandolin, and guitar.  They have released 3 studio albums so far, and are set to release a fourth in 2016. On their band’s website, the girls say they share everything, including a bedroom, but they do not share clothes since they have differing styles, and their personalities are very different, too. But while these native Mississippians are Christian southern belles with a lot of charm, they are also a sexy ginger triple threat! 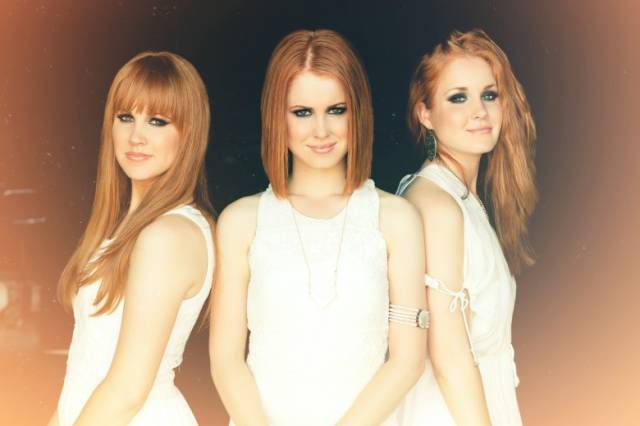 These talented sisters form the Seoul-based pop trio Infinity of Soul. Jin Ah, Sun Ah, and Min Ah all play stringed fiddle-like instruments in addition to singing vocals. They incorporate music styles from all over the globe, inspired by African folk music, and Russian sounds, among others like electronic and fusion. Their latest album is a collaboration with two French artists and includes African rhythms. All three sisters graduated with honors from the Korean University of Arts with their Master’s degrees. 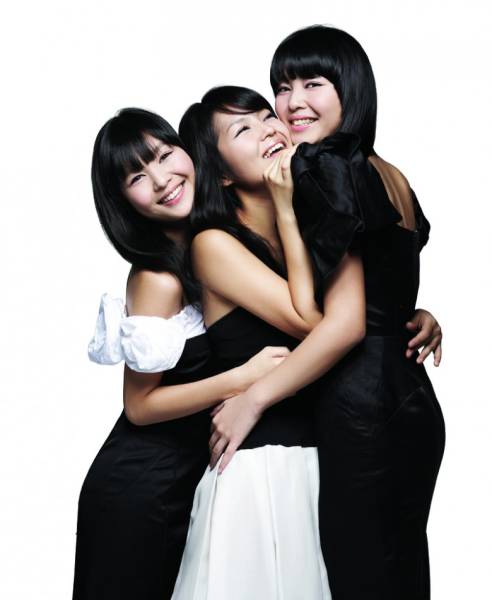 Saudi-born sisters Sama and Haya Abu Khadra are high-fashion, globe-trotting models. The glamorous duo have been featured on Harper’s Bazaar Arabia’s Best-Dressed List, and a piece in Vanity Fair Italia was written on the twins. Their mother owns an upscale boutique in Saudi Arabia’s capital city of Riyadh, and her daughters frequently accompanied her on buying trips to Fashion Weeks around the world as they grew up. For a while, they called Dubai home, but are now in the U.S. (when not jet-setting off to some Fashion Week somewhere). They currently model, DJ, and are students at the University of Southern California studying fine art and film, unsure if they will continue to model in the future or choose another path. 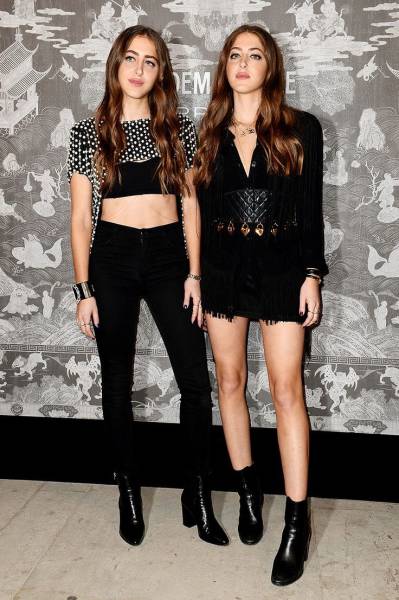 These beautiful girls (Jade, Joelle, and Mariah Tang) hail from Edmonton, Alberta, Canada, where they were born on Christmas Day 1990 to an 18-year-old Ukranian mother, and their Chinese-born father. This unique blend of Asian and Eastern European heritage produced three gorgeous young ladies, who also happen to be quite talented. Besides doing some DJ work, and modeling in Canada and Asia, two of the three (Mariah could not get out of her contract in Asia at the time) had roles in X-Men: Wolverine, though the producers reportedly wanted all three girls. And though they may look identical, they are different heights, and have different personas: Joelle calls herself the “shy, weird one”; Jade is goofy and easy-going; and Mariah is a social butterfly. 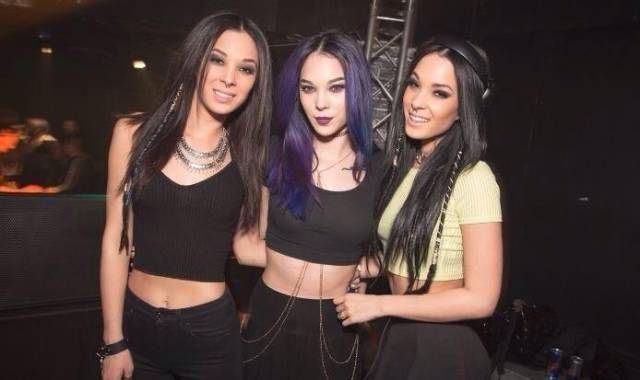 They may be only 16 and the youngest on this list, but already Renee and Elisha Herbert are well-known as fresh-faced twin models for Peppermayo, a Sydney-based online fashion boutique. Interestingly, while active on social media and their “Ask Me Anything” page for fans, little information about their personal lives is online. We do know that they live in a house together, attend school in Queensland on the Sunshine Coast, and speak both English and French. Also, they are quite obviously true Aussie beach girls because their millions of Facebook and Instagram photos are mainly of them and their friends in tiny bikinis at the beach or anywhere with water – the pool, a waterfall, waterholes, you name it. 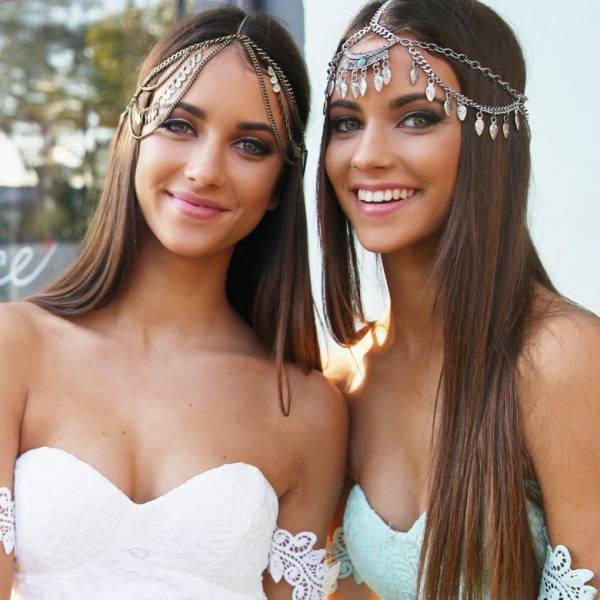 The Pyfrom Quadruplets – The Bahamas

Born in Florida but raised in Nassau, Bahamas, Bahamian quads Jodi, Catherine, Christina, and Janelle Pyfrom now attend college in California. They were born 10 weeks early, and if identical quadruplets were not going to make headlines on their own, hours later in the same hospital, a set of triplets was born!

They had a modest upbringing in Nassau, where their different personalities emerged, though all four share the same affinity for dark chocolate and the same distaste for insects. Another thing they all share is a love of music, which is why they became a pop quartet called FourEver1. Someday they hope to have their own television show, which has always been their lifelong dream. 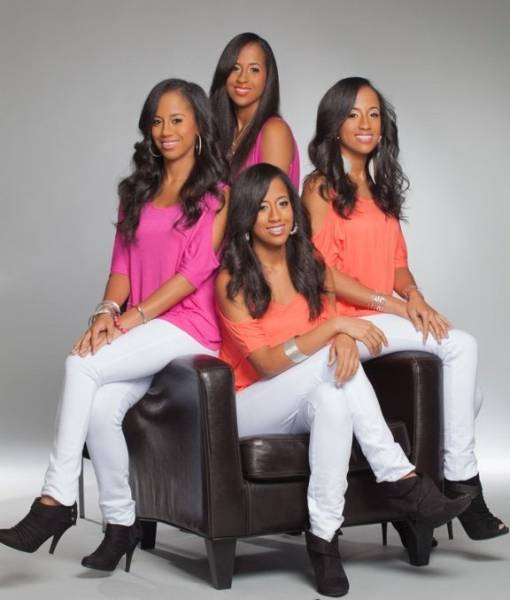