Soldiers’ Field Rations From Around The World (9 pics) 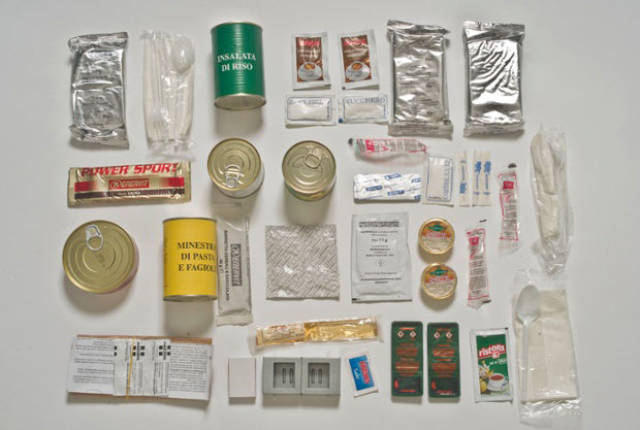 The Italian ration pack contains a breakfast shot of 40% alcohol cordiale, a powdered cappuccino, lots of biscotti, and a disposable camping stove for heating parts of the meal, including a pasta and bean soup, canned turkey and a rice salad. Dessert is a power sport bar, canned fruit salad or a muesli chocolate bar. 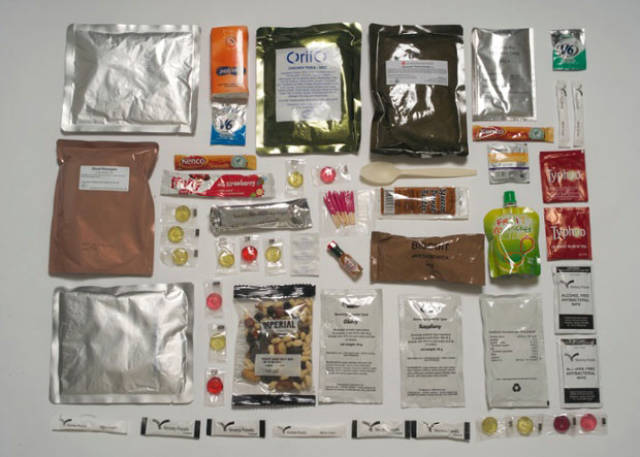 The British pack is dotted with familiar brands from Kenco coffee and Typhoo tea to a mini bottle of Tabasco. The main courses include the British favourite, chicken tikka masala, and a vegetarian pasta. There’s also pork and beans for breakfast, and lots of sweets and snacks from trail mix to an apple “fruit pocket” that looks like it might not be out of place in a school lunchbox. Plus packets of Polos and, of course, plenty of teabags. 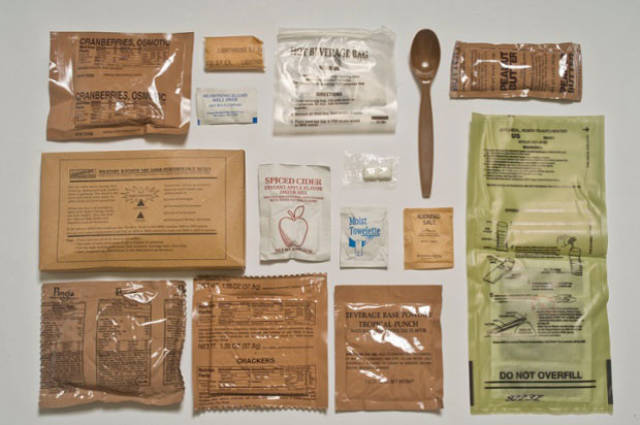 Almond poppy seed pound cake, cranberries, spiced apple cider (the hot US non-alcoholic drink) and peanut butter and crackers make up this very American meal package. The main – pasta with vegetable “crumbles” in spicy tomato sauce – is less traditional, but the “flameless heater” shows off American tech skills – just add water to the powder in a plastic bag and it heats up enough to warm the plastic meal pouch. 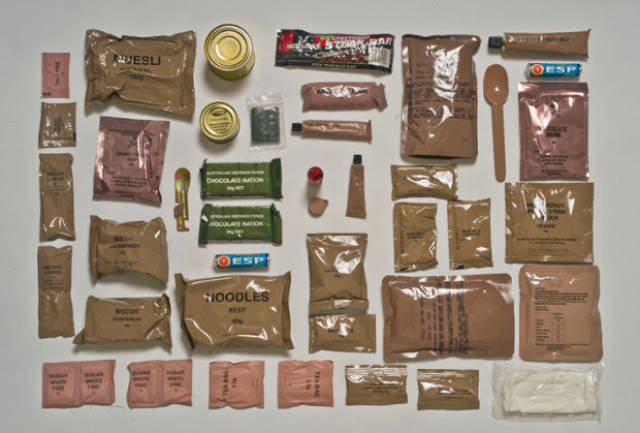 The Australian ration pack has more small treats than any of the others. Most of it is packaged by the military, from a serving of love-it-or-hate-it Vegemite to jam sandwich biscuits and a tube of sweetened condensed milk. The bag includes a can-opener-cum-spoon for getting at the Fonterra processed cheddar cheese, and main meals of meatballs and chilli tuna pasta. There are lots of sweets and soft drinks, and two unappetising-looking bars labelled “chocolate ration”. 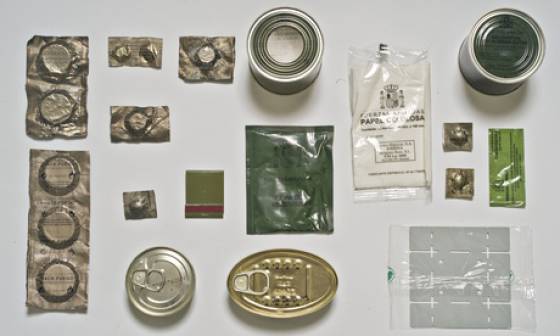 The Spanish lunch pack has cans of green beans with ham, squid in vegetable oil, and pate. There is also a sachet of powdered vegetable soup, peach in syrup for dessert and crackers handed out to go with the meal in place of bread (not shown). There is a disposable heater with matches and fuel tabs, as well as lots of tablets: Vitamin C, glucose, water purification, and rehydration. 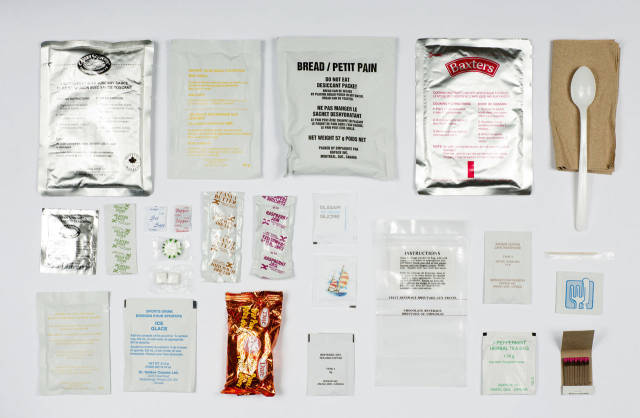 While there are Bear Paws snacks in the Canadian ration pack, there’s the shocking omission of maple syrup. You have the choice of salmon fillet with Tuscan sauce or vegetarian couscous for the main meal. There is also the makings of a peanut butter and jelly (raspberry jam) sandwich for breakfast. 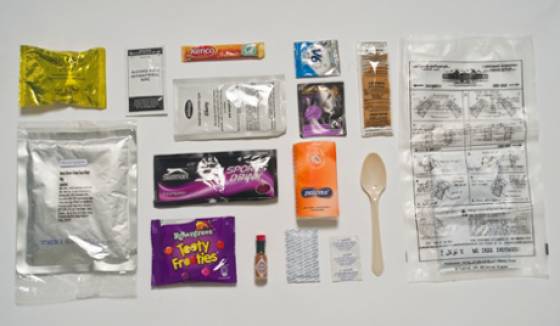 The Norwegian pack has American technology (the flameless heater) but British tastes. There is Earl Grey tea, beans and bacon in tomato sauce, a golden oatie biscuit and Rowntree’s Tooty Frooties. 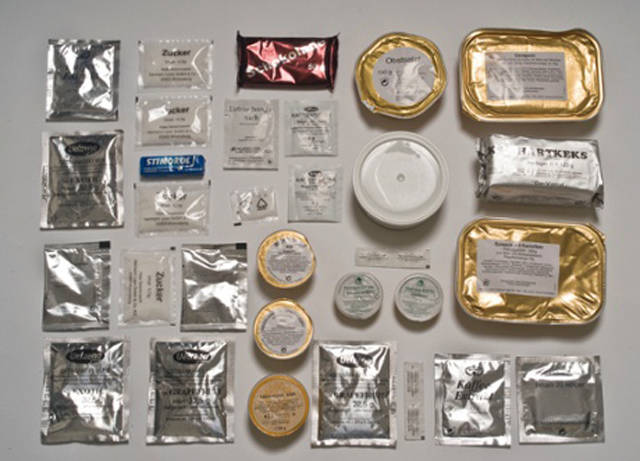 The German ration pack contains several sachets of grapefruit and exotic juice powder to add to water, and Italian biscotti, but also more familiar treats such as liver-sausage spread and rye bread, goulash with potatoes, and for breakfast sour cherry and apricot jams. 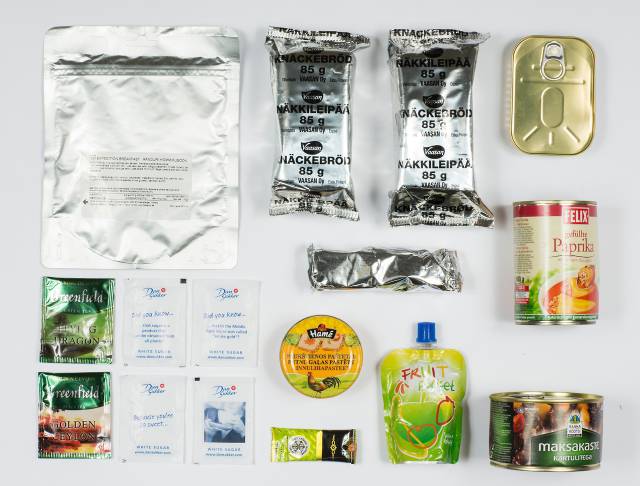 Stuffed peppers, chicken-meat pâté, smoked sprats, and liver sausage with potatoes make an eclectic menu here. Plus, crispbreads on the side, and halva with vanilla for dessert. Breakfast is muesli, a fruit pocket and honey.

Sister 1 year ago
This was written by a bigot moron.
Reply