A Lot Of James Bond Gadgets Do Really Exist! (21 pics)

This spy tech was widely used in the Soviet Union, Europe and the U.S. Codenamed ‘Ajax,’ the camera’s trigger was held in the pocket, and a camera lens was hidden within a button in a regular coat. Gotta look sharp and dress the part, eh? 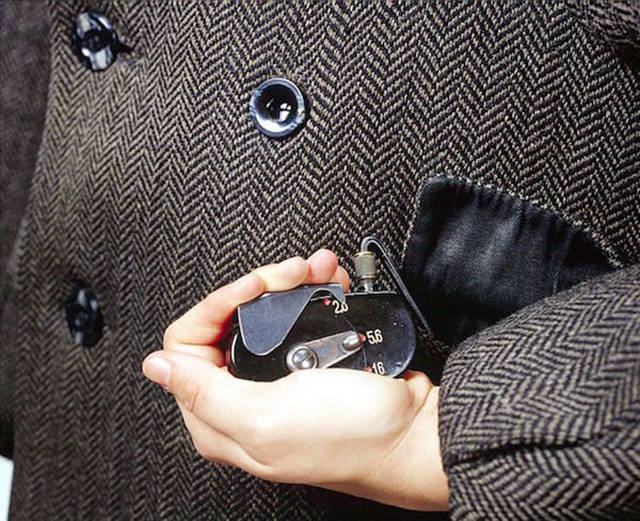 Designed and used by the CIA, this stump would be placed near a Soviet base and used to intercept radio transmissions. The data would then be sent up to a CIA satellite and beamed to the U.S. 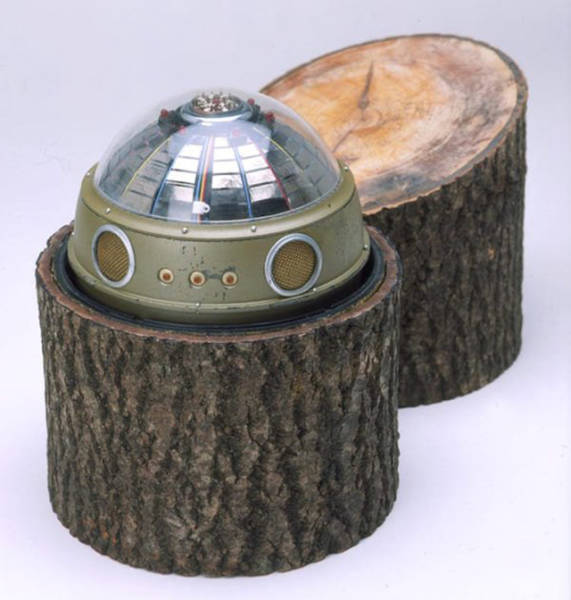 While this lipstick looked ordinary, it was designed and used by the KGB during the Cold War and was capable of firing a deadly .177 round.

Wonder how many spies accidentally shot themselves in the face with this? 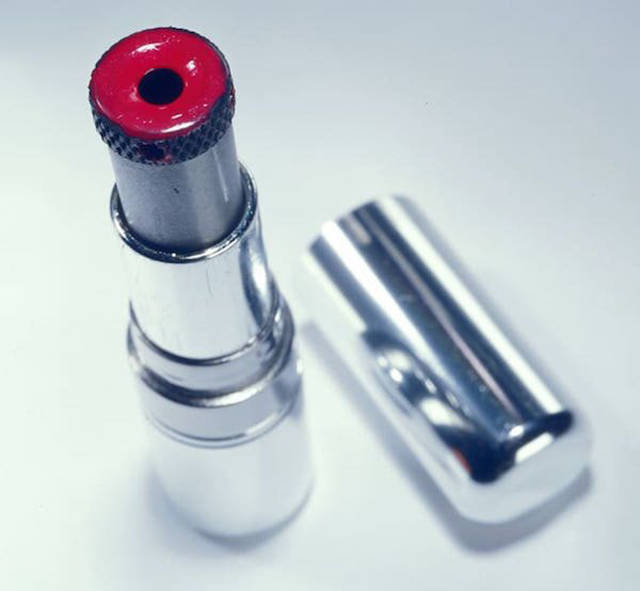 You always hope that every mission goes according to plan, but sometimes you get caught and disavowed. In the case of a compromised agent, the CIA required that you chose death over torture and issued hidden Cyanide pills inside of the arm. All you had to do was chew on your glasses and you were taking your secrets to the grave. 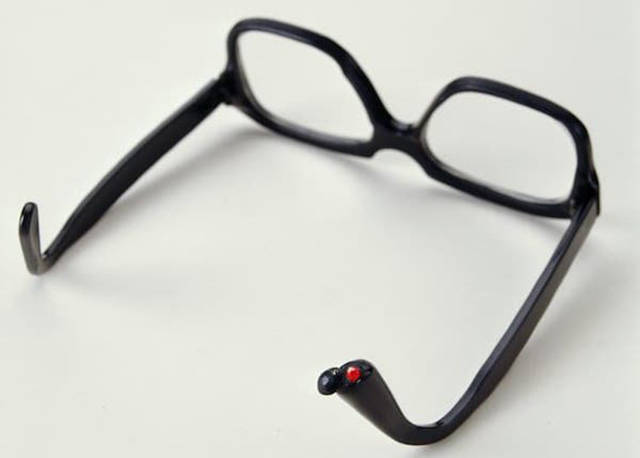 This gun was developed by the US Office of Naval Intelligence and was designed to be triggered by pushing the top plunger into the enemy. 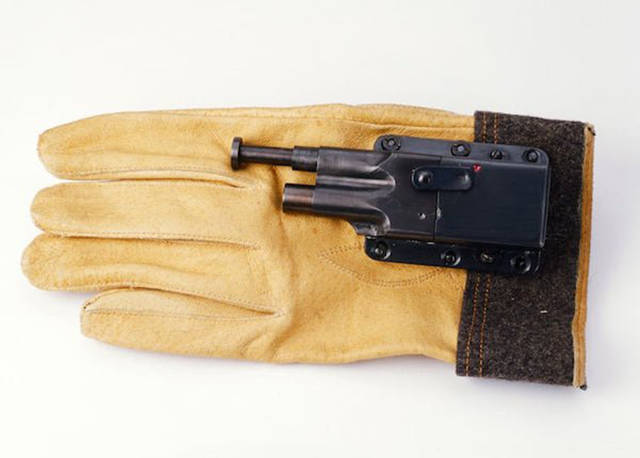 This was developed in West Germany, and had a tiny camera that was situated on an agent’s wrist and was capable of snapping 8 photos. Since there was no viewfinder and no other way to see what was in the frame, you just had to make sure your wrist was angled in the right way to catch the shot. 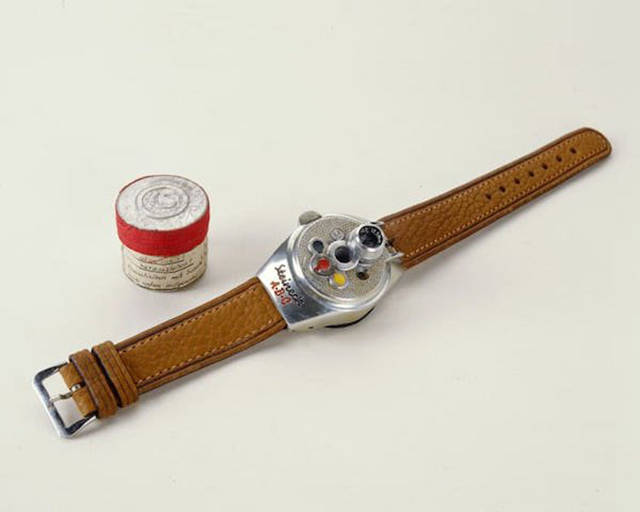 This is probably the best way to spy on someone-by hiding a transmitter in something no one would ever touch. This was issued by the CIA during the ’70’s, and transmitted a radio signal to coordinate airstrikes and do recon. 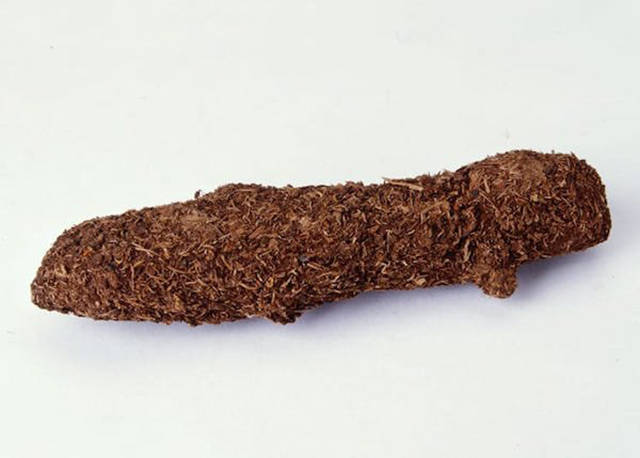 While this looks like a pretty sturdy case for cigarettes, it was actually a hidden camera developed by the German Stasi during the 1960s. This way, the operative was able to grab a smoke, while secretly taking pictures, simultaneously. 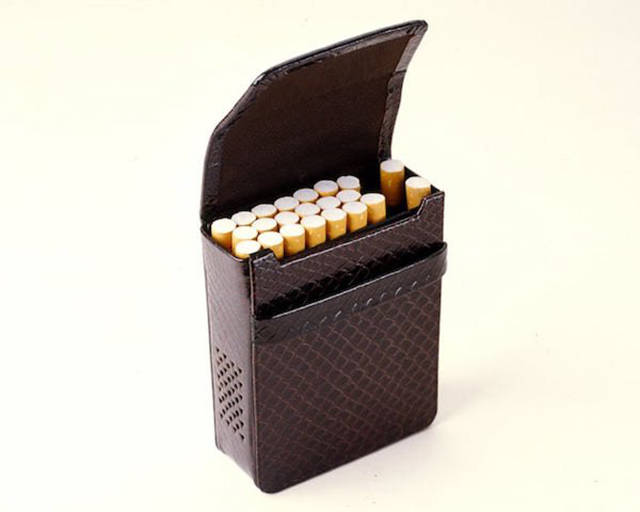 Developed by the KGB, this weapon was actually used by Soviet spy Bogdan Stashinsky to assassinate two Ukranian dissidents by disguising it within a rolled up newspaper. 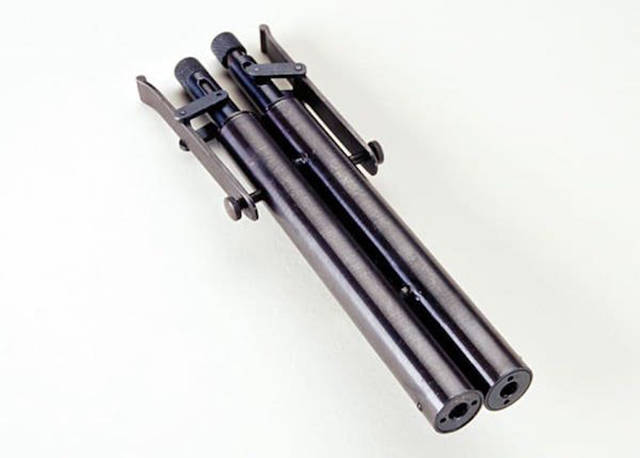 When you need to smuggle something that you don’t want found, where do you put it? Yep, in your ass. This was used by the CIA, and was a novel way to get the tools you need, where you need them, without getting them confiscated.

No wonder they used secret codes and not secret handshakes. 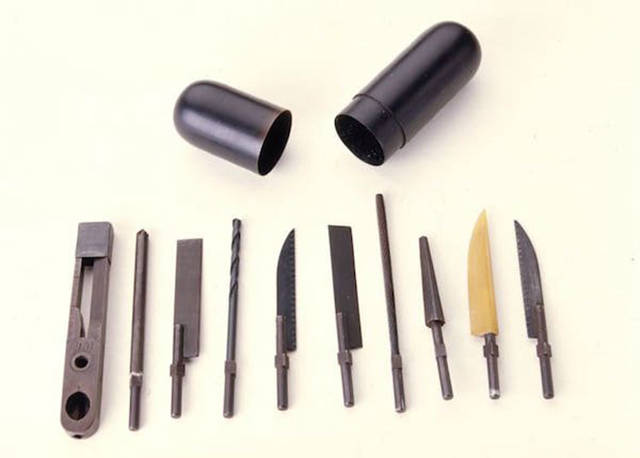 During WWI, the Germans devised this method of getting reconnaissance on enemy positions. The camera was placed on a timer and the birds were set free to fly over the battleground. Upon returning, the birds were caged and the film developed, so that the Germans could come up with real-time strategies. 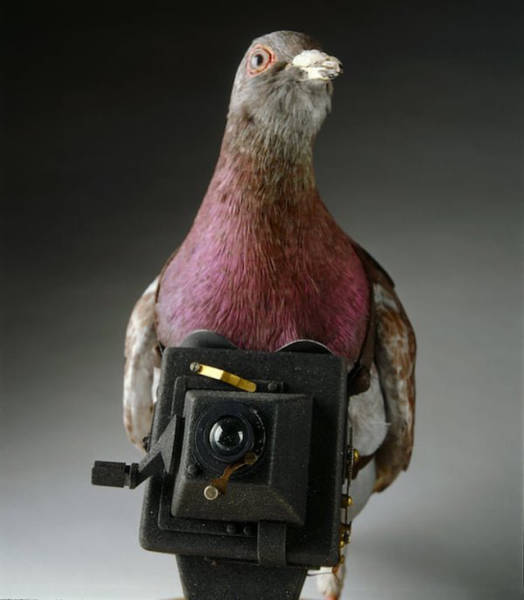 During WWII, some US Army Intelligence officers were issued this canteen, which contained explosives in the lower portion of the container. 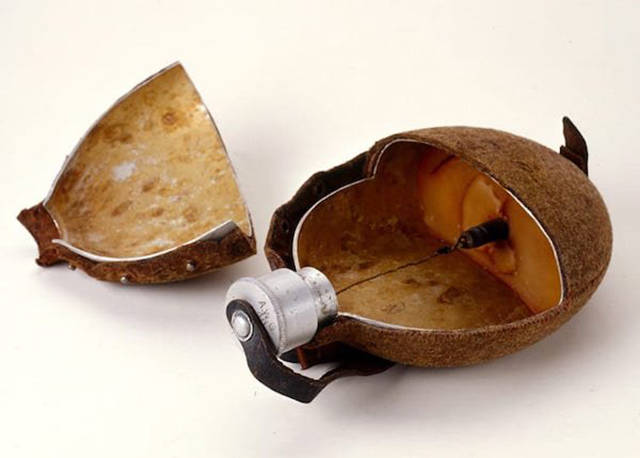 While a pretty common piece of tech, this one was particularly crafty as it was a shoe stolen from a U.S diplomat by a Romanian Secret Service agent, and outfitted with a hidden microphone and transmitter. 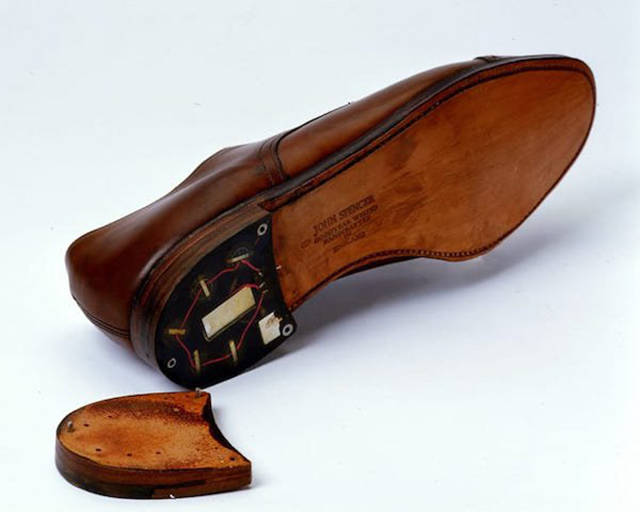 Developed by the British Special Forces, this was a firearm disguised as an ordinary pipe. Despite its size, it packed quite a punch. 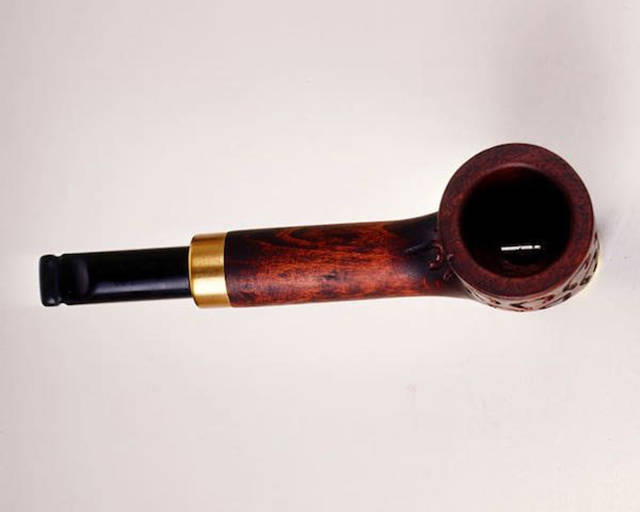 This lump of coal was developed by the United States OSS during WWII. Within it, is a hollowed out centre, filled with an explosive. The camouflage kit they included with it, was to paint the lump of coal into the exact colours of the local coal you were inserting it into. Then, when the enemy combatants threw the coal in the fire, the spy coal would detonate. 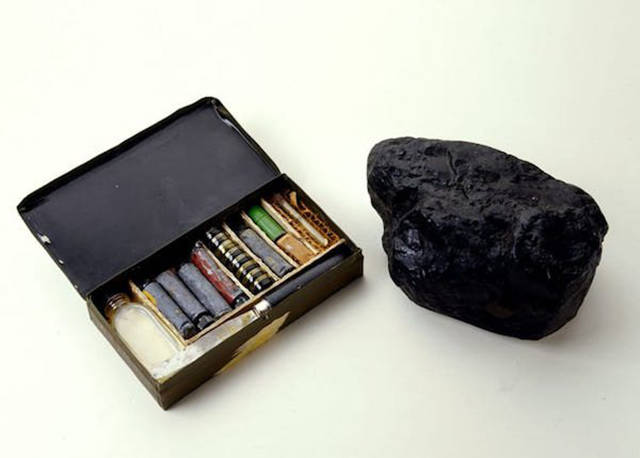 There’s very little info on who developed this nasty, little gem or who used it, but it was a functioning flashlight, with a deadly barrel. 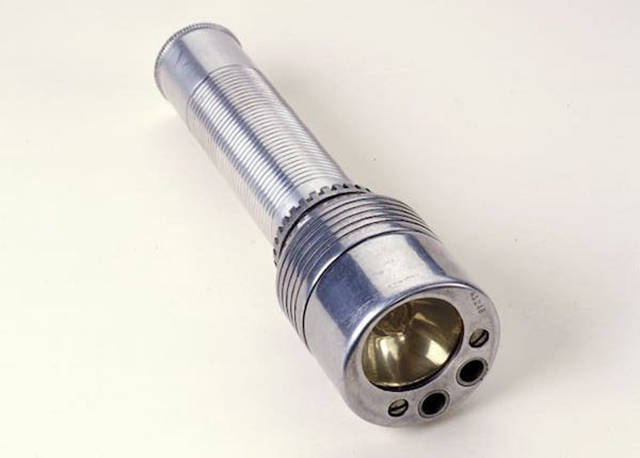 Still in use until the end of the Cold War, this was a common tool for all covert agencies to use, offering clandestine storage for microdots and microfilms. All you needed was a needle to poke into a hole in the face of the coin, to open up the two sides.

Just don’t forget which one is the fake one and put it in a meter. 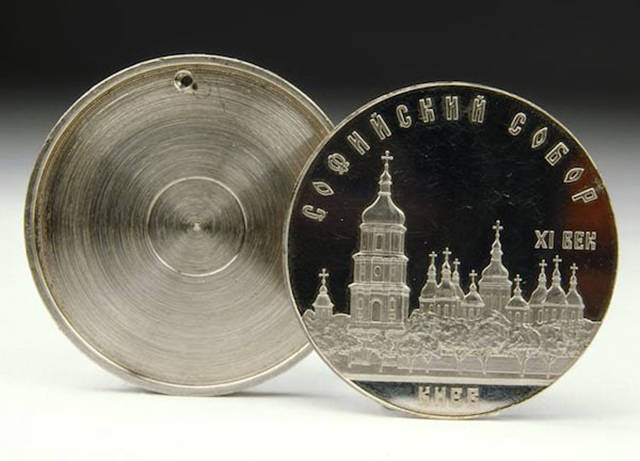 Issued by the US Office of Strategic Services (OSS) during WWII, this gadget was designed to look like a pack of pencils, but was actually a time-delay incendiary device, which allowed the operator to get to safety.

The pen(cil) is mightier than the sword in this case. 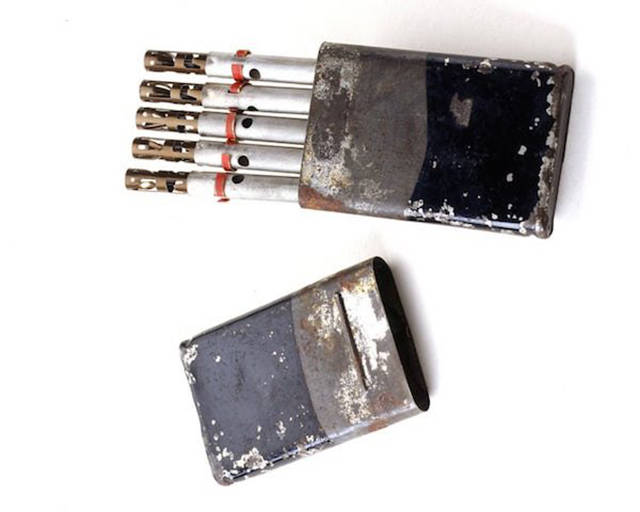 This kit was issued to CIA operatives and designed to duplicate keys by making an impression in putty, and then casting a model of the original. 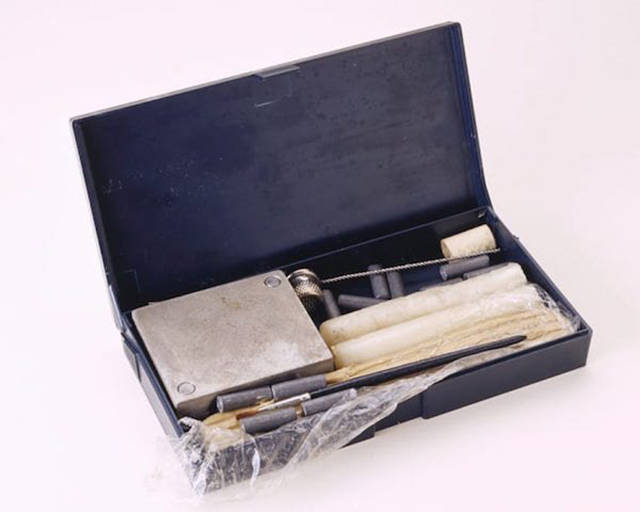 Issued by US Intelligence, this pen contained all the tools an operative would have needed to pick a standard door lock. 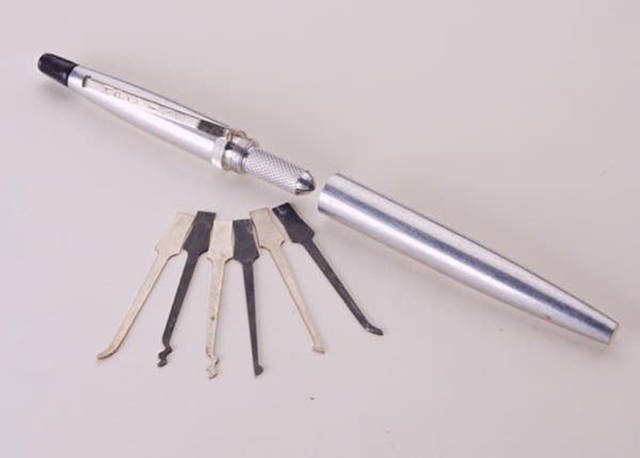 These boots were actually pretty clever. They don’t look like much, but they were worn by British MI9 pilots, and when you took the top parts off, they looked like regular shoes, allowing the downed pilots to blend in. 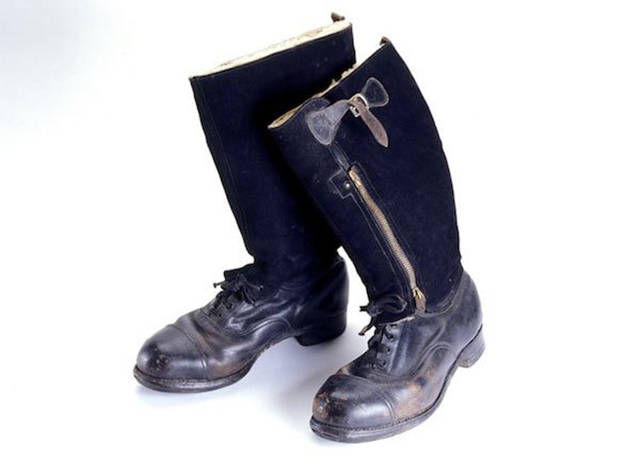