Last summer Imgur user Xposeidon95 decided to embark upon a project with his dad and build a bar, but not something conventional – something pretty, [email protected] cool. He wanted to make it out of an old car. Checking out Craigslist, he found just the right base and he purchased the front end, wheels, hood, and bumper off of a 1951 Ford F-3. 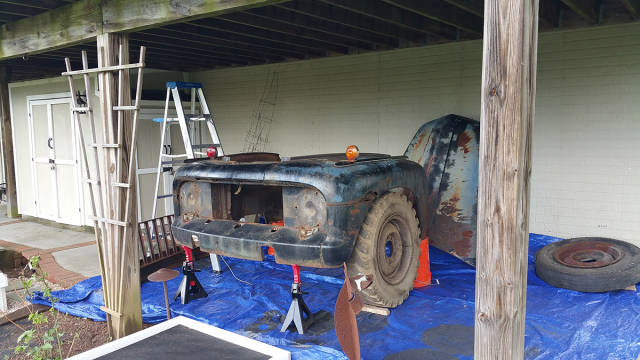 Early on, he didn’t really have a clue of what exactly he was trying to make the front end into, so he and his dad just played around with some painters tape and some ideas to get the creative juices flowing. 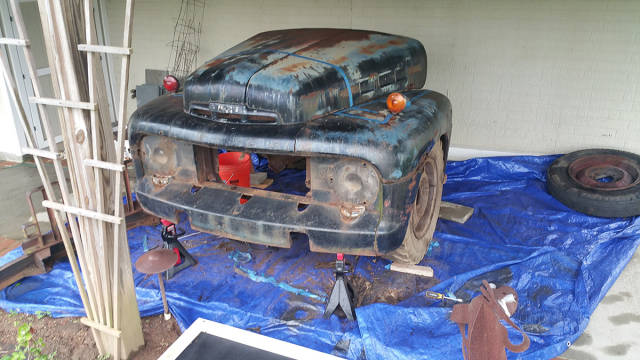 One of the first things he did was find matching tires to go with the vintage hubcaps. 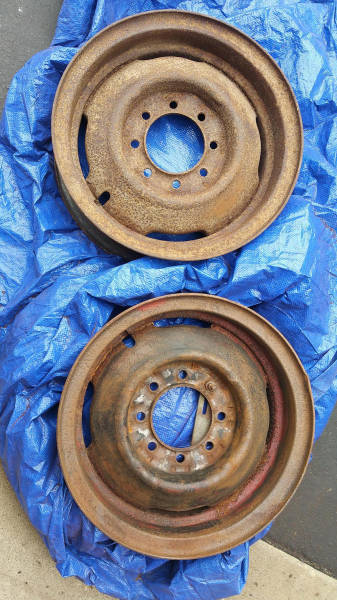 Next, they sanded the inside of the front end to get rid of the old liner (which is the black, peeling layer seen above) and sprayed black bedliner to make it look clean and prevent rust. After seeing just how sturdy the body panels were, they decided to screw on steel pipe fittings and screw in the legs. The put in a whole bunch to make sure the whole thing was level. 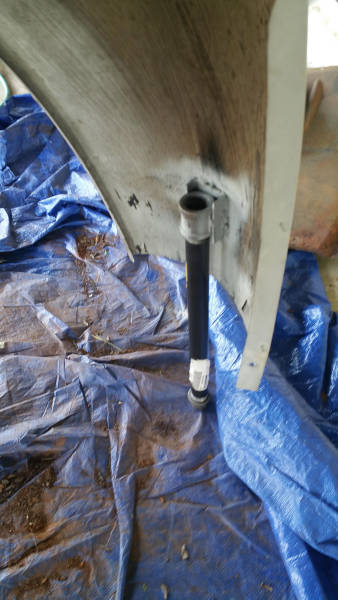 They sprayed the legs with bedliner as well to make them less noticeable and make it seem like the truck was sitting on its wheels. 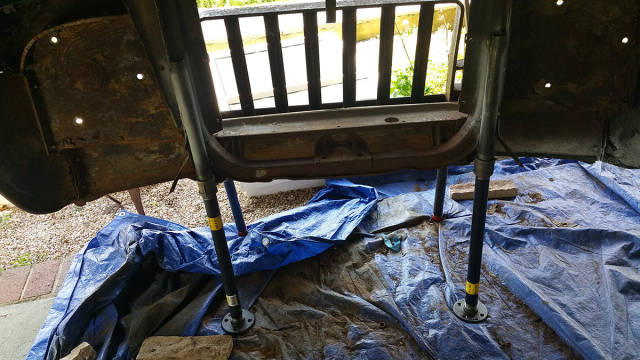 They figured people would try to put their foot on the bumper, so they took off the grate, and the bumper and welded legs to it. The bumper would then be bolted onto the body later, to make it easier to move. 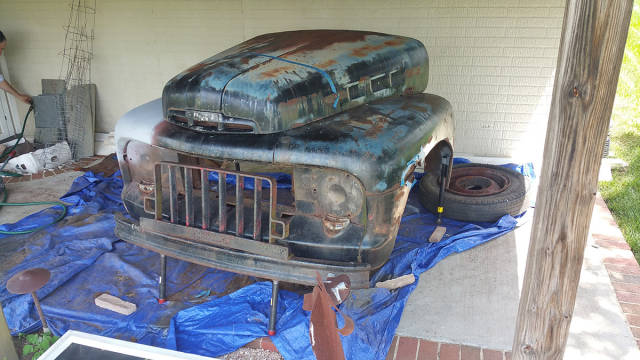 Both fenders had large rust holes the needed some work. One side was better than the other, so they cut out the rust and bonded over it. 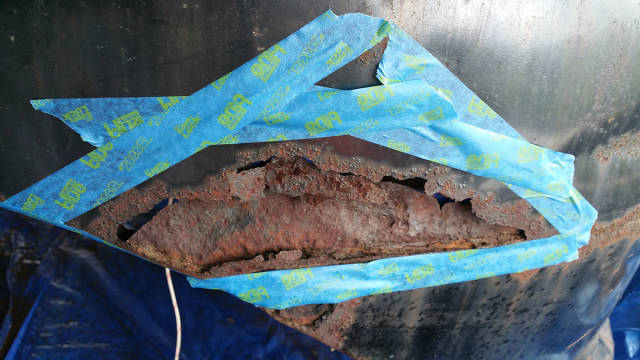 It took a lot of layers of bonds, but eventually they were able to sculpt it to make it look original. Most of the large dents and small holes were filled, but not all of them, just to give it that vintage, patina’d look in the end. 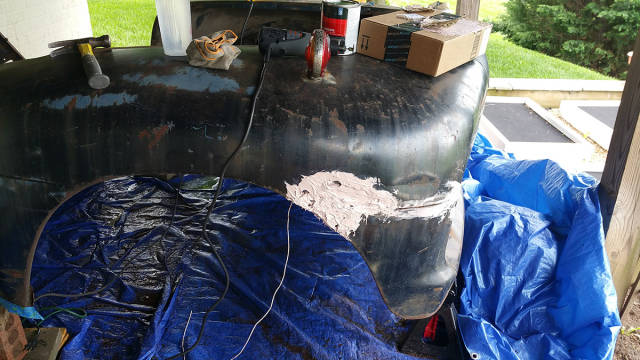 After sanding and grinding down this fender, they played around with some paint. They did a test coat with a rust coloured primer then a grey coat, to see if they could sand the paint down and give it a rusted look. 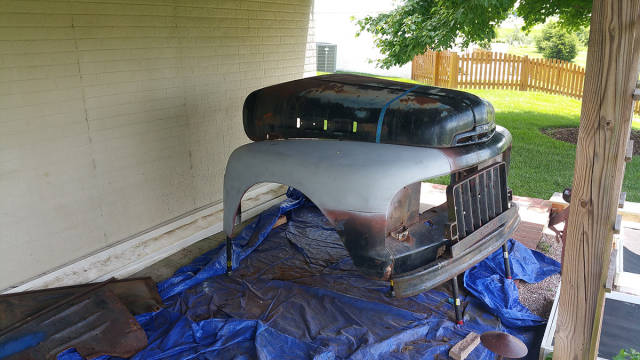 The other fender was in worse shape. It was too far gone to fill with bonds, so instead, he cut out a piece of hood that he wasn’t going to use and welded it on, before topping it with filler. 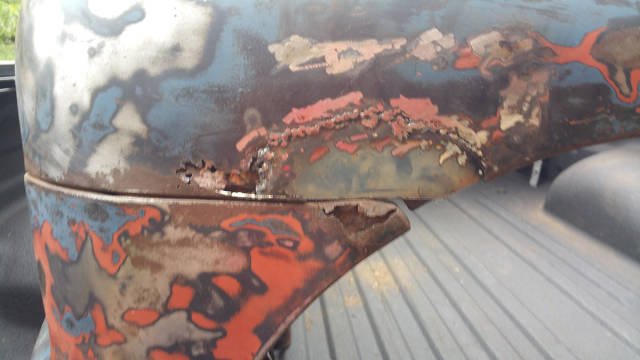 After all the body panels were sanded and grinded to prepare for the new paint, they set to measure out the bar top. They wanted to create a top that looked like the beds of old trucks, so they used a red maple and heavily sanded it before staining and adding poly. 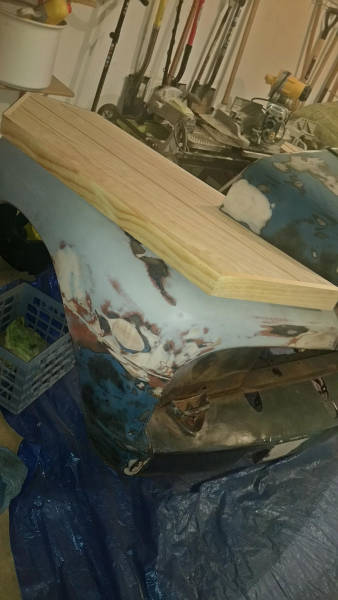 Since the fenders weren’t flat, they had to tediously cut pvc spacers to level out the barter, before screwing them on from below. 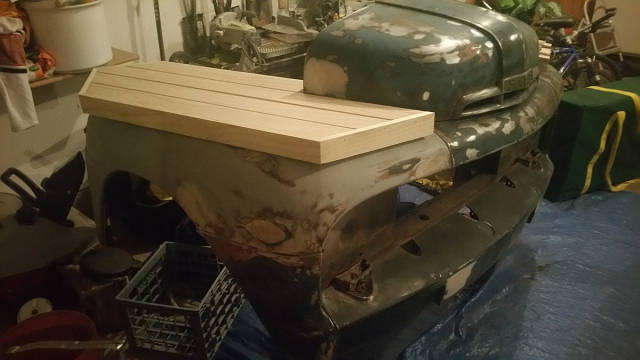 They cut off part of the hood to make a space behind the bar, as well as a cover for the tap and shelf on the inside. They also bolted the hood down to the body with 5 huge bolts, helping to stiffen the whole construction.

Then they rounded the edges of the cut hood and curved them down to make a smooth, rounded edge. 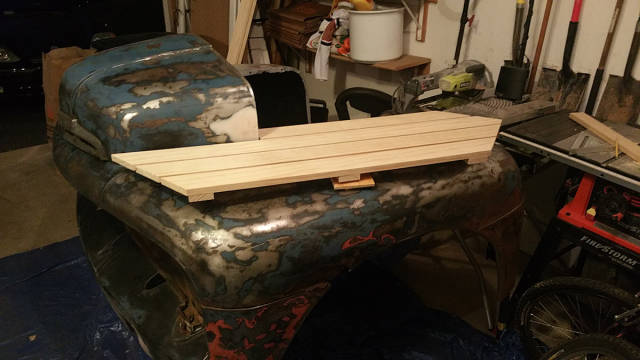 After much searching on the internet, he found a grille for this Ford model that wasn’t insanely priced. This one had a dent in it that made it difficult to fit, which was why no one had used it in a restored truck. This made it perfect for this bar.

He also took the time to restore the silver piece on the nose, taking off the black spray paint with a wire brush, so the natural metal could shine through. 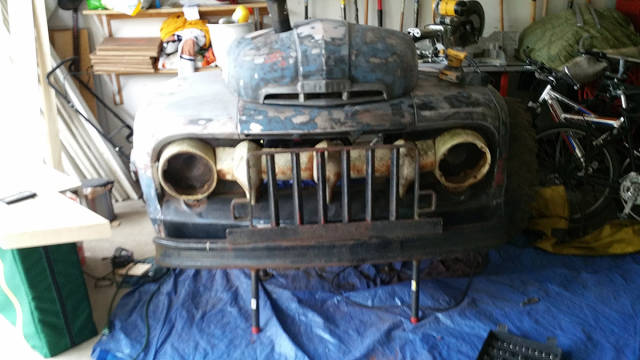 Then the entire truck was sprayed with a rust coloured primer, then grey primer than a thick blue to match one of the original Ford blues. After it was all dry, he wet sanded it to create rust spots. They tried to create the rust spots where they originally were or where they’d naturally occur. When it was perfect, they cleared it with a satin finish 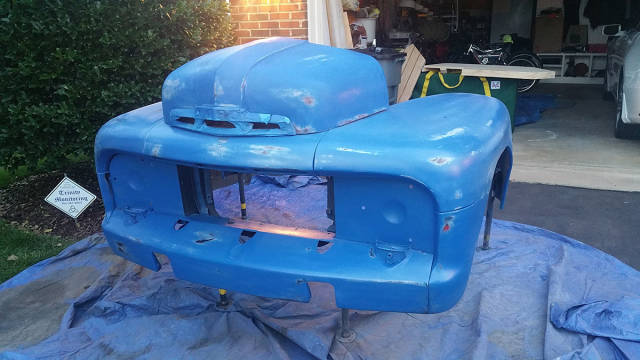 Next, they sanded down the wheels and painted them with an off white, but made sure it wasn’t a perfect job. The Craigslist guy that they purchased the truck from, also had some of the original centre caps, so he gave them to Xposeidon95 for free. 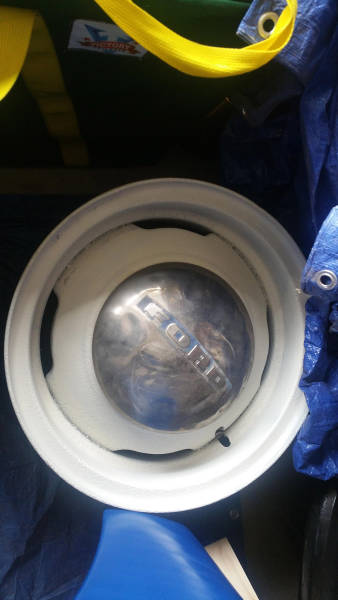 He found a local tire shop to mount the old tires for cheap. Next they welded in a large nut to the wheel, fed a large bolt through the tire into it, and put a nut on either side of the fender to tighten it up. The excess bolt was cut off the top so it would be at the right height and keep the wheel just slightly up off the ground. 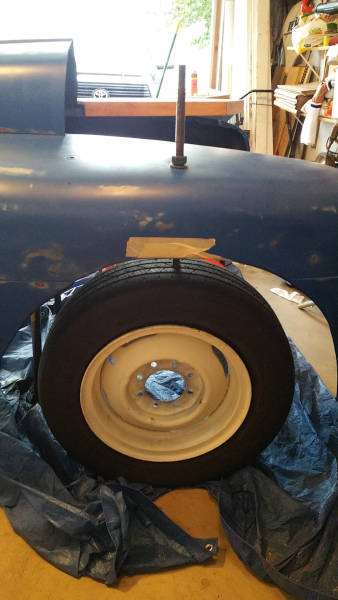 Since the original colour of the grille looked odd with the new colour of the wheels, he sanded it down, hit it with the rust coloured primer, then with the off white. 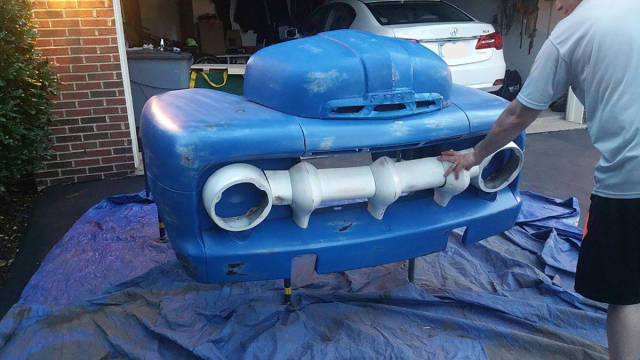 It was then sanded down in spots and cleared like the body. The bumper was hit with a gloss black, and some bolts were welded on to secure it to the body.

Then there’s the sweet “beersexual” bumper sticker that we totally approve of. 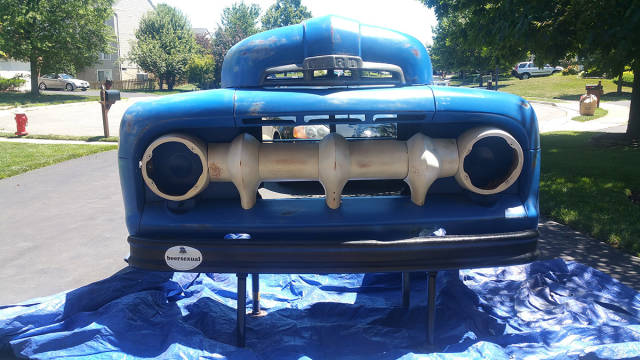 The hood had some awesome chrome side trim on it that he wanted to use, so he mounted it to the sides of the bar tops. 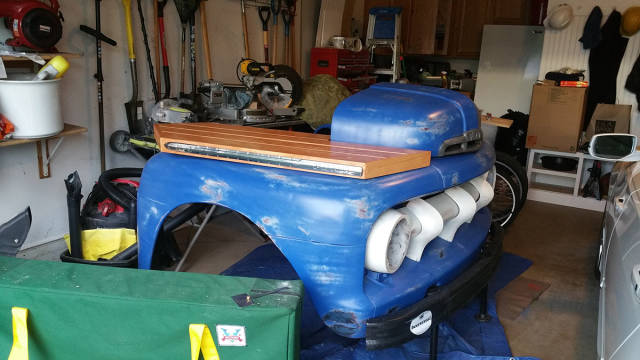 He also added flat caps to the legs so that the bar could be screwed down later. 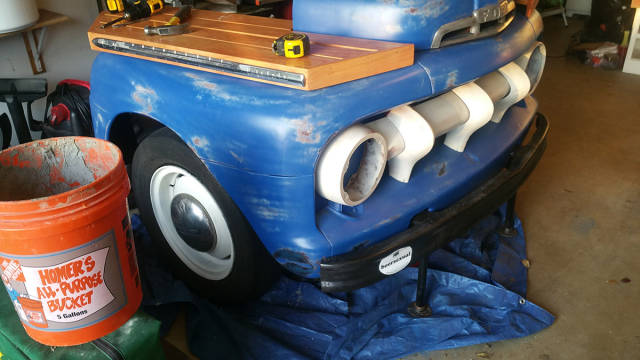 Inside, they created a shelf and backsplash to match the bar tops. It got bolted down to a metal brace that they welded to the inside support structure in the truck. The whole thing was hinged to allow access to the C02 canister and kegerator hoses that they bought off of another guy on Craigslist 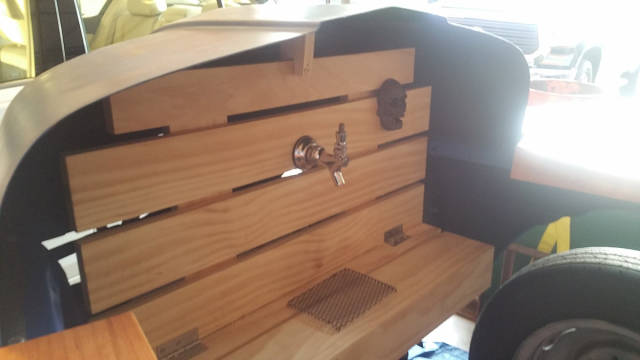 Finally, he made headlight lenses from fluorescent ceiling light covers until he could find the original bulbs, retainers and rings.

Finally, it was ready to drive down to its new home. 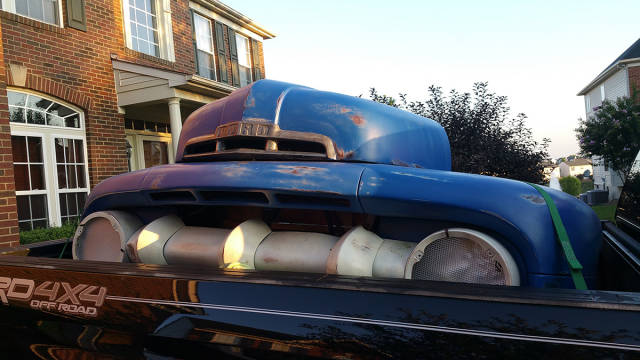 Inside, the final touches were put in. The custom made grate came from gutter protectors, and the catch can was made from scrap metal roofing.

His plan is to make a custom tap handle to match the vintage Ford theme. 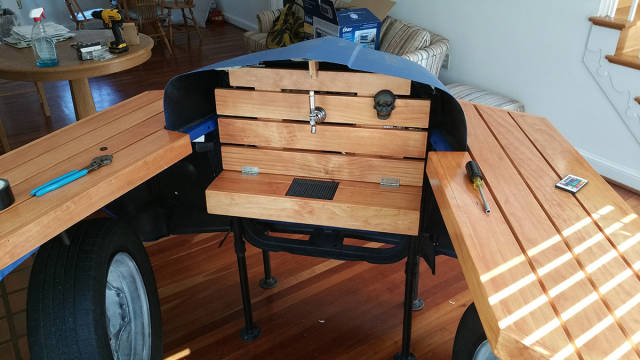 He added in some LED lights behind the grill that he could change with a remote for some mood lighting and that was it. 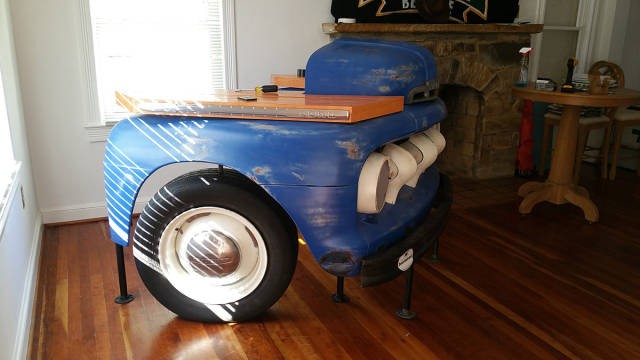 Now that is one hell of a home bar, just need to fit in a mini-fridge somewhere and you’re set. According to Xposeidon95, he’s got some other ideas to fit in with this theme to make his home set up even more legendary. 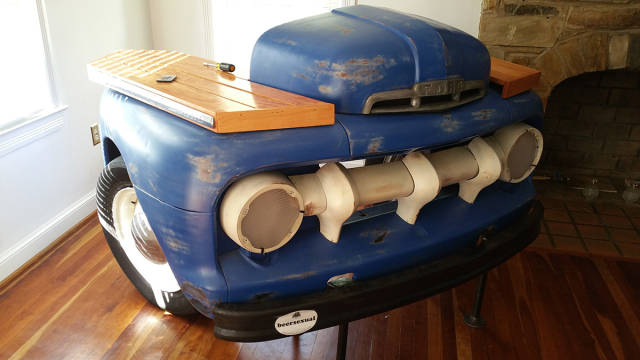 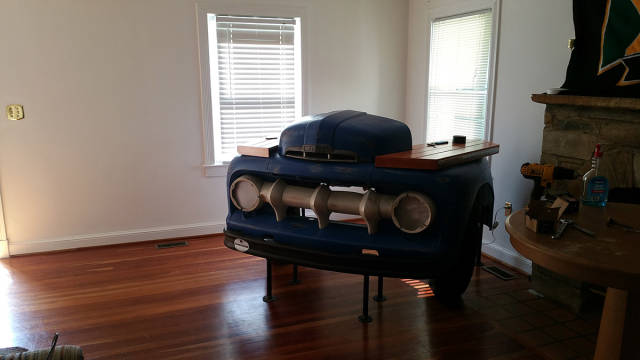 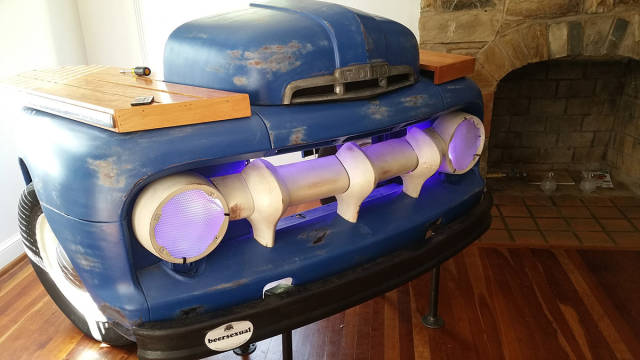