Some Paranormal Activities Have Yet To Be Explained (23 pics)

These things were really caught on camera, but it’s still unclear whether it’s some strange trick that cameras play on us, or something that we don’t know about is going on in this world.

This creepy photo of a Skinwalker went viral in 2014 and left people baffled. The image was taken by a geologist working in New Mexico. Netizens assumed it was a skinwalker because it shared similar traits to the shapeshifting creature from Native American folklore. Eventually, people assumed it was a prop from the 80s Sci-Fi film "Xtro."But is it really? 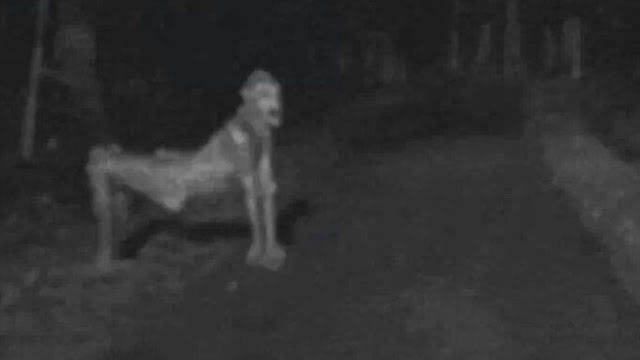 The Fallen Angel Of Catalonia reared its ugly head on June 2016. Two guys were exploring the Campdevanol Forest in Catalonia, Spain when they spotted this creature with glowing eyes. Some conspiracy theorists claimed there was a video circulated online that proved these guys set everything up, but others aren't quite so sure. 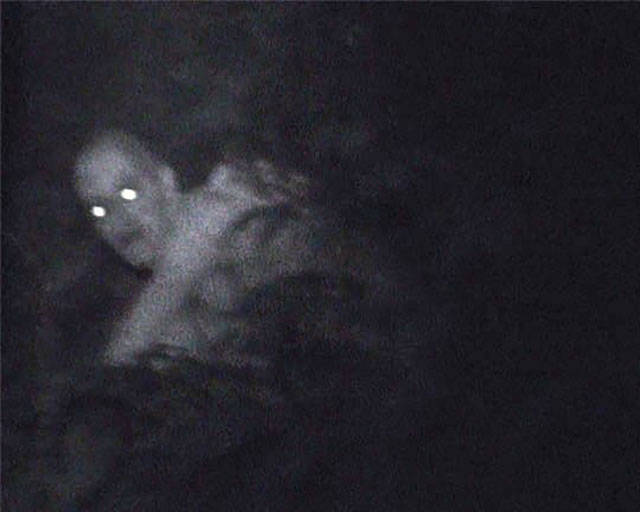 The tadpole-like creature was scarier than the Loch Ness Monster when it appeared in Australia. The photo was captured in 1963 by Robert Le Serrec in Queensland. Nobody could identify what species this sea creature was from, but it looked like an extra large black sperm. 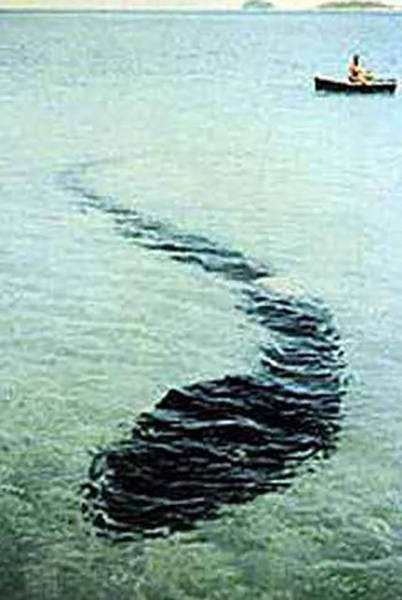 Some accounts claimed that the creature was trying to hunt Le Serrec to eat him. Eventually, citizens assumed that it was a huge black plastic sheet weighed down by the ocean and not a prehistoric beast. 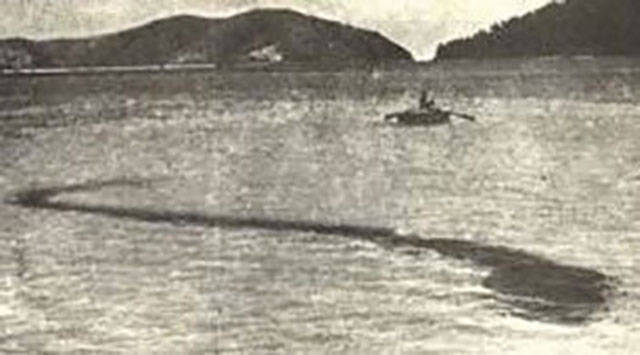 The Cooper family's photo went viral when it showed a ghost coming down the roof. The family had bought a house in Texas in the 50s. When they asked a person to take a photo of them, they were shocked by what they saw after they developed the film. Some netizens claimed that it was the soul of a previous homeowner while others claimed that it was a manipulated image using Photoshop. But it's still creepy AF. 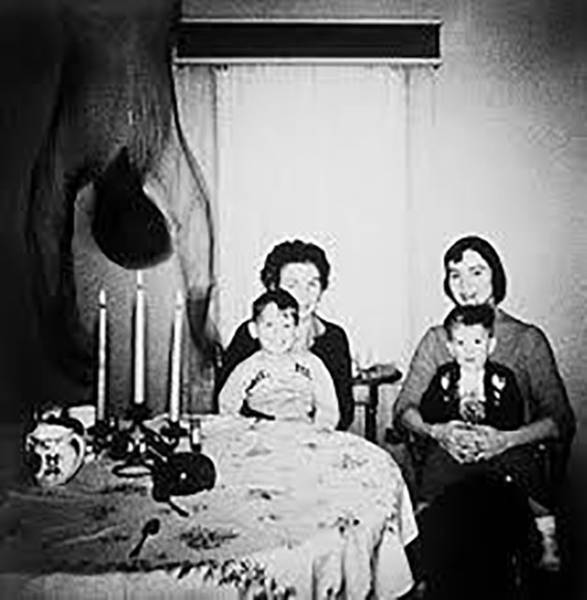 The Wessex Way Monster was a strange werewolf-like monster that caught everyone's attention. A CCTV camera captured the unidentified creature by A338 Wessex Way road in Bournemouth, Dorset, England. Many claimed that it was the legendary werewolf of Wessex Way. But others claimed it was a reindeer crossing the northbound side of the road and nothing more. 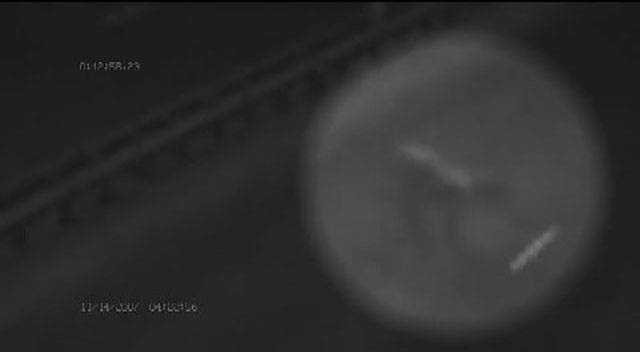 Ghosts can be pretty terrifying, especially when they lunge at you from a tree. Then again, ghosts are sneaky that way. Just ask this freshly married couple from 1942 who unknowingly captured a photo of this ghost lunging towards them in Jasper, Alabama.

Is this the Great Norwegian Mountain Troll or just a trick of light? It was taken on December 1942 by the crew of an RAF recon flight 300 miles north of Berge. Whatever it is, we certainly wouldn't want to get caught in that fog alone with this creature. 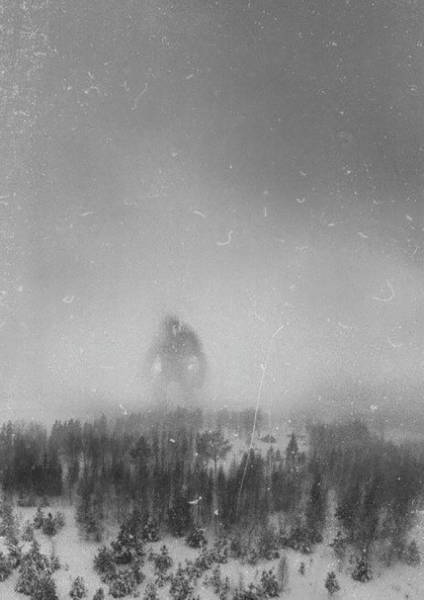 Can you see it? Take a closer look on the bottom left hand side by the door. You'll probably see a mysterious ghostly figure of what looks like a little girl while this woman takes a selfie for her Facebook profile. Now that's an image that's bound to be a lot of likes and a lot of questions. 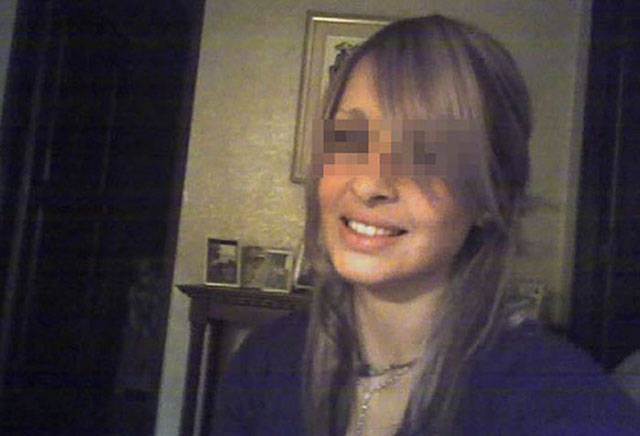 If gates to hell really do exist than this Dover Demon has just been captured on camera. The image was taken in a small suburb of Boston, Massachusetts by four teens who witnessed the creature at different points in time over a 24-hour period. 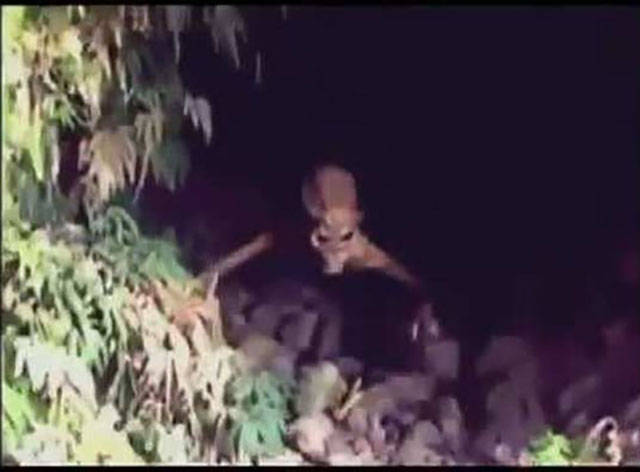 If you thought school was a drag, be grateful you got out when you did. At this former old school in St. Augustine, Florida, a haunting figure was seen at the top window, frightening many people looking from down below. Maybe it was just a neat trick to attract tourists, or maybe someone's been in detention for a very, very long time. 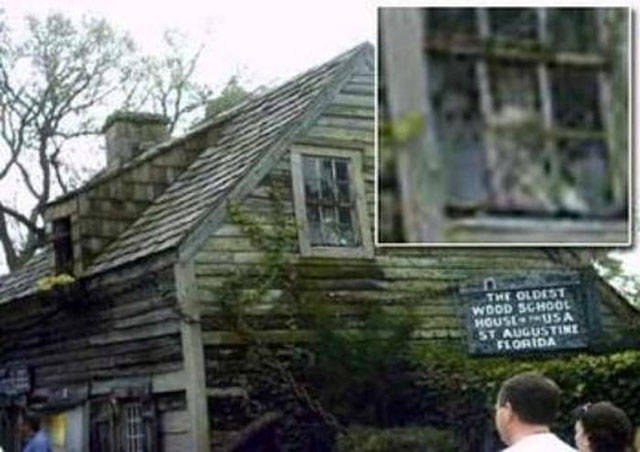 The ghost of a woman in white has been haunting a Romanian hotel for the past 150 years. The Decebal Hotel has been around for a while, so it was bound to accrue one or two disgruntled customers over the years. This ghost of a tall woman in a long white frock is believed to haunt the spa area. But it wasn't until 2008 that 33-year-old Victoria Iovan got photographic proof of the ghost. 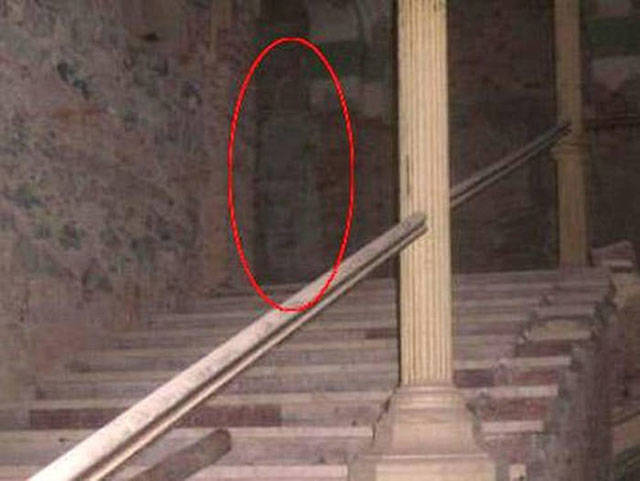 Whoa! Did you see that ghost taking a peak around the corner? The photo was taken in 2008 by professional photographer Neil Sandbach in Hertfordshire, England. He was there for a wedding project and he wound up taking a photo of this creepy specter among the otherwise beautiful wedding shots. 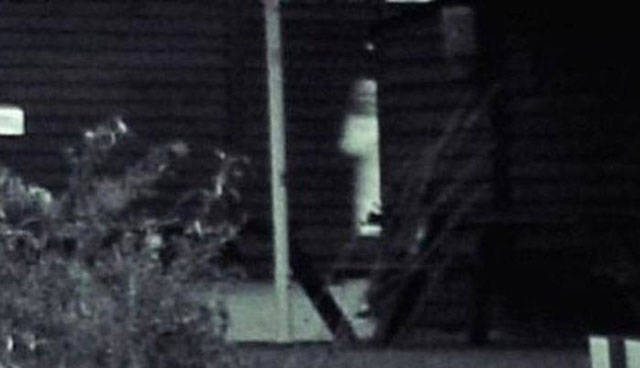 Remember the movie "The Woman In Black"? Well, this might be the real McCoy. It was taken at a famous haunted house that's over 180 years old in Antioch, TN. You can clearly see that this ghost is wearing an old style black dress, and it isn't camera shy, but you should be ghost shy and get the hell out of there. 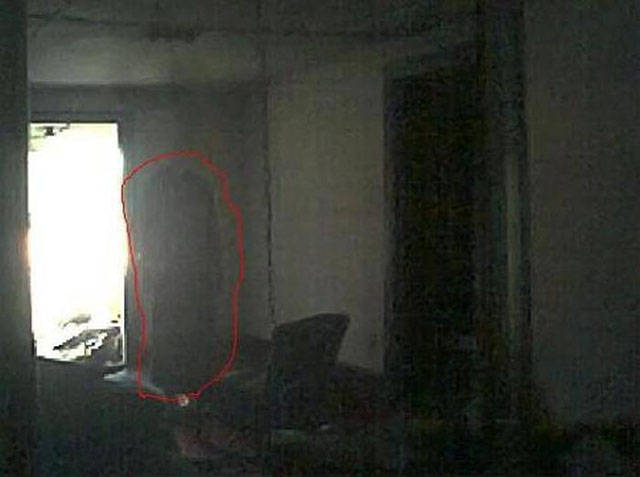 Could the Jersey Devil have migrated to a forest in Canada? This is where the footage of the alleged creature was taken, and although the image has been challenged several times, no one has been able to confirm that it's fake. The photo clearly shows what looks like a demon-like creature chasing after a deer. Locals have also refused to go into the woods at night out of fear of running into this supernatural monster. 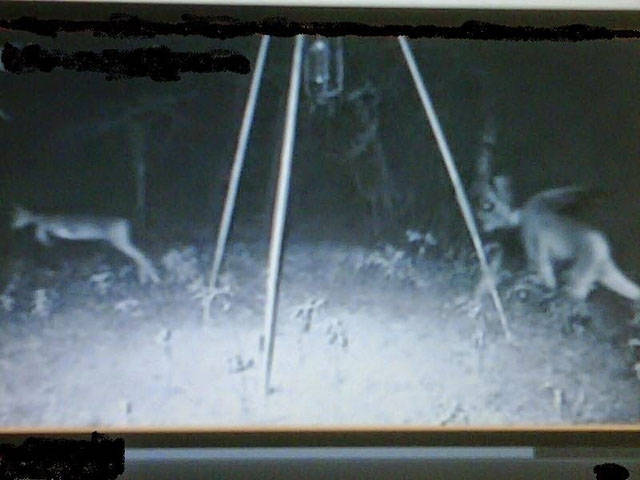 It seems that deer aren't big scaredy cats like us humans when it comes to the supernatural. Here we see a deer, seemingly unaffected by a strange humanoid figure that appears to be squatting down and laughing or smiling. It was taken in 2012 in northern Pennsylvania, and has defied explanation all these years. 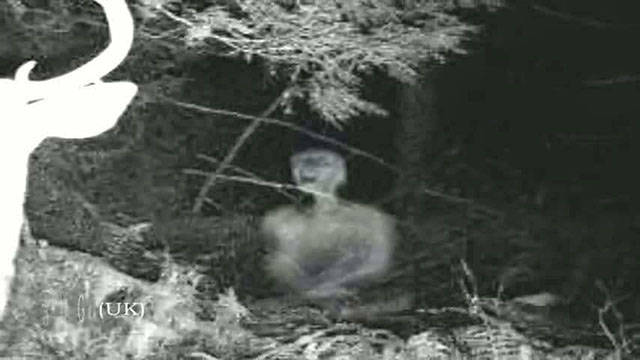 Do you believe Bigfoot is real? Want proof? Well, you might have it in this photo. Many believe this image was taken by a trail cam owner near Thunder Bay, Michigan, and many claim that it's the elusive Bigfoot. Since there have been several reported sightings of the creature in this area, it's very likely, or it could just be some husky logger walking in the distance. Who knows? 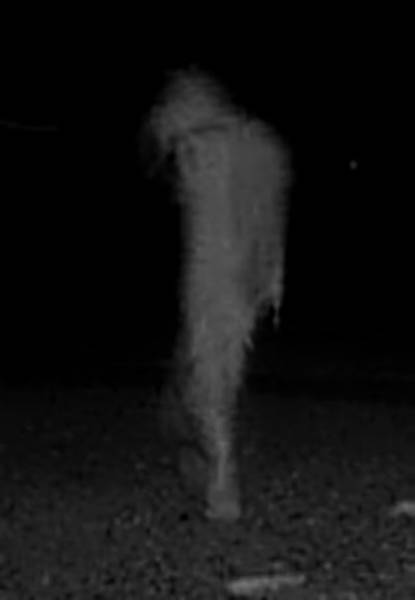 Do you believe in life on other planets? If so, do you think they live among us? Well, a man near Berwick, Louisiana claimed that his friend captured this image of an alien in the wreckage of his trail cam. Fortunately, the SIM card wasn't damaged or we'd never have known about this thing's existence. But is it an alien or a hoax? 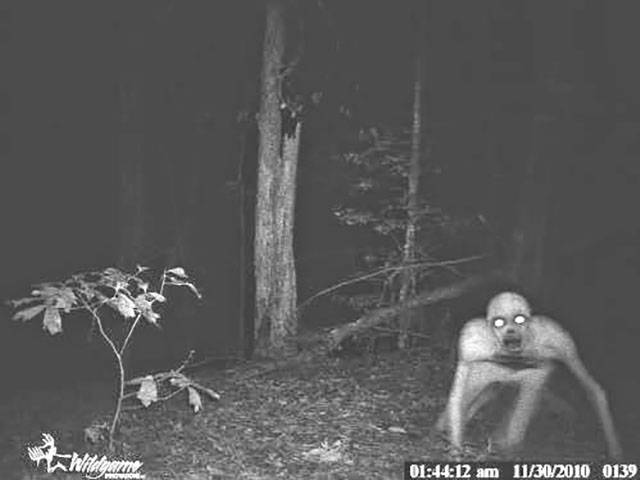 Netizens claim that a Georgia man saw a series of strange lights moving around his property at night. At first, the man thought someone was trespassing, so he set up trail cams around his property and wound up capturing images of bright glowing things. One of them even looked like it has something protruding from its back and it was also holding a wand like a fairy. But some think it might have been a ghost or an angel. 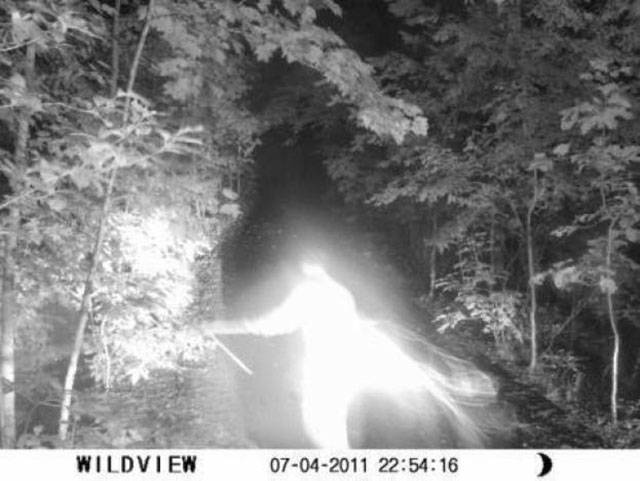 Is this evidence that Bigfoot exists or just a perfectly elaborate hoax? The simian-like creature from American folklore, who's also known as Sasquatch, has left many people baffled. After centuries of investigation, no one has been able to come up with physical evidence of the creature's existence, but still, this photo of the creature in the Pacific Northwest is difficult to discount. 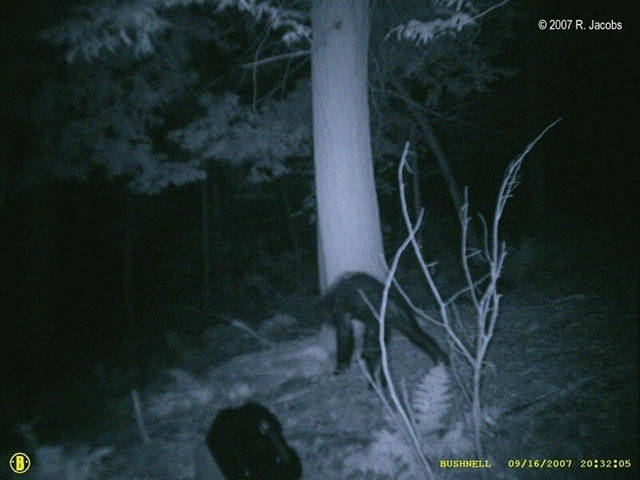 In 1971, farmer Ted Litton caught this weird creature alive in his artificial pond in Lilac, TX. Eight hours after a local newspaper ran the story, his farm was invaded by Army soldiers wearing decontamination suits. They drained the pond and found nothing, but they did keep the creature that looked like a cross between a scorpion and a crab, and while they promised little 5 grand, they never gave it to him. 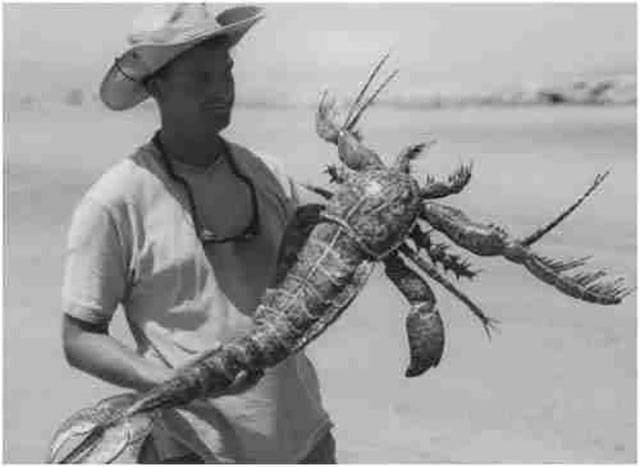 When you go fishing and catch something, you rarely expect it to talk back to you. But in 1971, in Hawk's Lake near Clarkson, Minnesota, 16-year-old Jim Hughes caught a huge, ugly fish. Then things got really weird when he unhooked it and the fish said, "Hurts! Hurts!" In a clear, deep voice. Both Jim and his brother Bill heard it and noticed it's man-like hands and fingers and blue eyes. It scared the crap out of them before the creature slid back into the water. 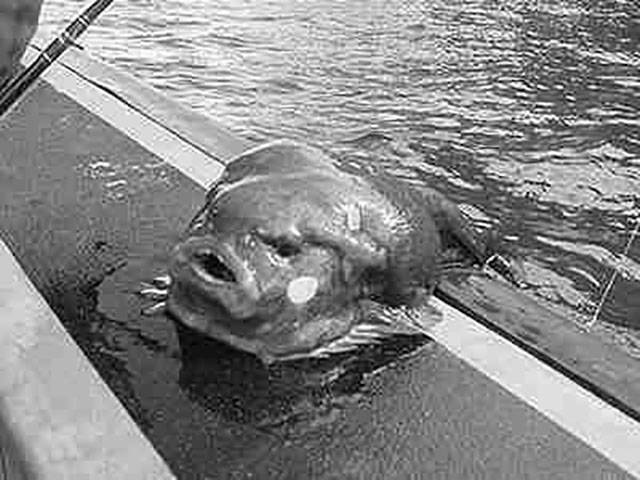 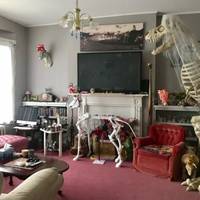 Debra 1 year ago
Fakes. But what's with #9? Fuzzing out someone's eyes some how makes them incognito? That's Aunt Beth!!
Reply
0 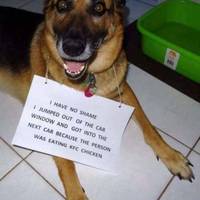 Grissel 11 month s ago
Interesting how those creatures always are looking at the camera.
Reply