That "candy" flower cup that Gene Wilder bit into in Willy Wonka and the Chocolate Factory was actually made of wax.

Michael Caine was so terrified of Heath Ledger's Joker in The Dark Knight that he forgot his lines in the first scene they shot together.

In The Princess Diaries, Mia wasn't supposed to trip and fall on the bleachers. That was just a clumsy moment by Anne Hathaway, but director Garry Marshall liked it and kept it in the film.

Paul Bateson, who played a radiologist's assistant in The Exorcist, was a convicted murderer who dismembered and killed gay men in the late '70s.

Due to a miscommunication on set in The Hateful Eight, Kurt Russell accidentally smashed an antique guitar from 1870 instead of a prop. You can see Jennifer Jason Leigh scream and look at the crew afterwards.

Richard Gere improvised the scene in Pretty Woman when he snapped the necklace case on Julia Roberts's fingers, so her reaction was totally natural. 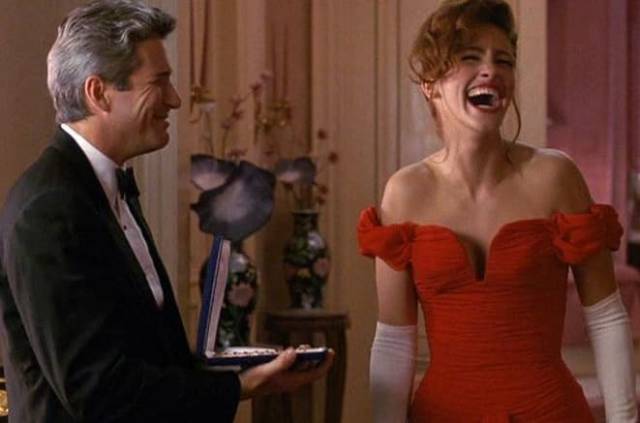 Sylvester Stallone wanted to make sure the boxing scenes looked real in Rocky IV, so he instructed Dolph Lundgren to actually hit him. A punch to the chest left Stallone in intensive care for eight days.

In Alfred Hitchcock's The Birds, live birds were tied to Tippi Hedren and also thrown at her while filming the iconic attic scene.

Steven Spielberg refused to collect a paycheck for Schindler's List, saying it would have been "blood money" and that all profits should be returned to the Jewish community.

Stanley Kubrick destroyed almost all of his props and sets from 2001: A Space Odyssey because he didn't want them to be used in any lesser science fiction films.

Matt Damon was the only one in Saving Private Ryan who didn't go through basic training. This was done so the other actors would show resentment towards him, to fit the onscreen character dynamics.

Michelle Pfeiffer was literally vacuum-sealed into her Catwoman costume for Batman Returns, which made it very difficult to move and breathe.

The movie Titanic cost more money to film than the actual ship cost to build.

Jim Caviezel was struck by lightning while filming the Sermon on the Mount in The Passion of the Christ.

In Alien, the actors were not told that the xenomorph was going to explode from Kane's chest, so the shocked reactions from everyone were real, even causing Veronica Cartwright to pass out.

Chris Farley was originally cast as Shrek, and he even recorded part of the movie, but he was replaced by Mike Myers after his untimely death.

Psycho was the first movie to ever show a toilet being flushed.

In Django Unchained, Leo DiCaprio accidentally cut his hand open during a scene, but he kept acting. He ultimately wiped the blood on Kerry Washington's face.

In order to make The Nightmare Before Christmas, it'd take the crew a whole week to produce about a minute's worth of stop motion.

The dog who played Toto in The Wizard of Oz received a higher salary than most of the people who played munchkins.

And Daniel Radcliffe's Harry Potter stunt double was paralyzed while testing a stunt for the final movie, so Radcliffe created a fundraiser to pay for his college education.

ZombieDarwin 4 year s ago
#24 Actually, I think that's supposed to be Jimmuh Cahter, not Shatner.
Reply