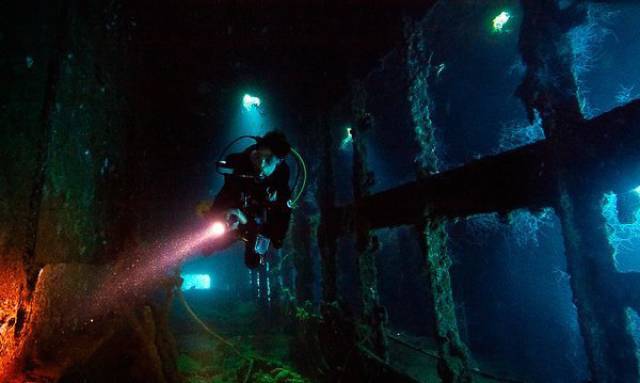 Located off the coast of Micronesia is the largest ship graveyards in the world. During WWII, Japan chose Truk Lagoon as their headquarters for the battle against the Allies in the South Pacific. This soon became their largest stronghold until February of 1944, when American troops launched an attack that sank over 60 ships and 275 airplanes.

Now, it’s a creepy, submerged, wreck-filled place. The entire lagoon is ringed with coral that protects all the sunken ships and planes from the turbulence of the ocean, leaving everything surprisingly intact. Now divers are able to swim through everything and brave the sharks, unused bombs, boxes of supplies and human remains that lay littered across the decks of the lost ships.

The Door to Hell 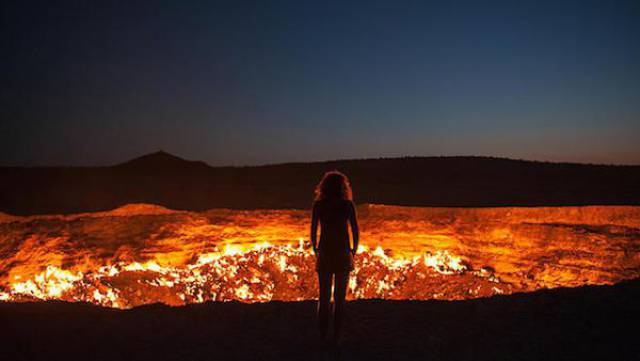 There’s a small village in Turkmenistan, called Derweze. It’s in the middle of the dessert, and has a population of 350. It doesn’t have much to offer, other than a door to hell, that’s been burning for over 40 years.

In 1971, a team of geologists broke through the surface of a massive underground cavern, which caved in and swallowed their drilling rig. Worried that the cave was full of dangerous gasses, they lit it on fire to burn it off. Obviously, it caught fire and hasn’t ever stopped. The crater sits on top of one of the largest natural gas deposits in the world, and will just keep burning until the supply runs out. 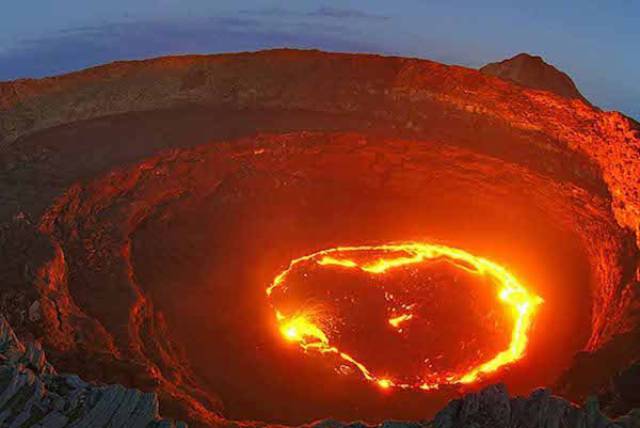 You might not guess it, but the world is constantly shifting under your feet, as plates shift and new chasms are created all over the world. The Afar Depression, located in eastern Africa, is such a place. Here, is one of only two spots in the world, where a mid-ocean ridge is visible on dry land, which makes it one of the most geologically active locations on the planet.

Back in 2005, this area experienced over 165 earthquakes over a 3.9 magnitude, which led to the creation of one of the largest lava lakes in the world. Called the Erta Ale, this crater is always full of lava, an looks like the gate to hell. 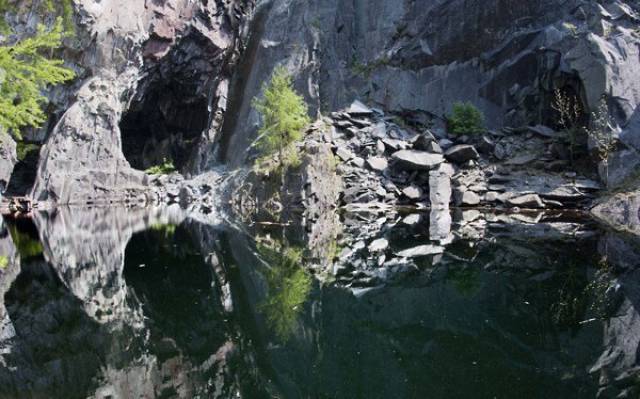 Smack dab in the middle of the U.K. is a quarry with one of the most terrifying images that mother nature has ever come up with. This old slate quarry has long been used as a diving spot, with a network of dangerous faces and has been known for it’s fair share of deaths over the years. But that’s not the scariest part.

Back in 2011, a photographer noticed that when the water is smooth, a perfect image of a skull is created. Half of the skull is created by the side of a cliff and a cave, and the smooth water does the rest. Add in some mist and creepy winds coming out of the underground and you got yourself an entrance to the land of the dead. This region in Iceland is located at the bottom of Mt. Namafjall – an active volcano. In fact, this entire area is a hotspot of geothermal activity and lends itself to being one of the most bleak and unsettling landscapes on earth.

The ground, everywhere you look, is covered with solfataras, which are boiling pools of mud, as well as sulphur-filled steam and volcanic gas that create a hazy climate.

Between the billowing clouds and boiling earth, as well as the lack of vegetation, gives Namaskaro an unearthly appearance and the nickname “The Gateway to Valhalla.” 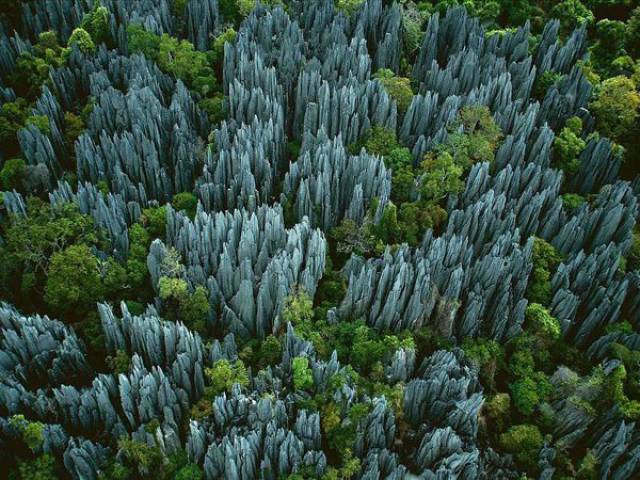 This national park in Madagascar is one of the oddest places you’ll find on earth. The entire park is composed of a forest of needle-like rock spires that rise up into the sky, as high as 400 feet. The rock, formed by water eroding limestone, is razor sharp and provides a home to many unique creatures.

While eerie and kinda creepy looking, this area is not well explored by scientists, because it’s too difficult to travel through the landscape on account of the rocks’ jagged nature. So who really know’s what’s hiding in this pointy forest. 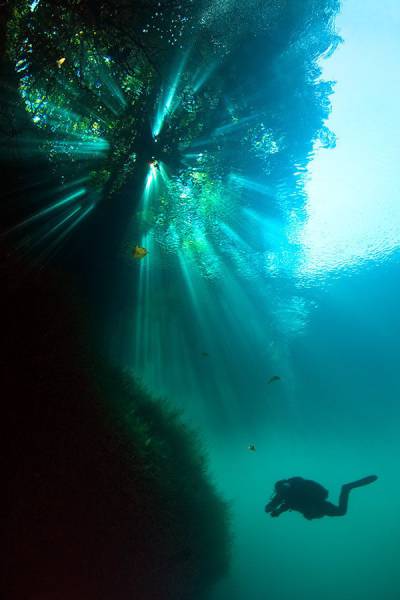 Blue Lake is one of the deepest lakes in Russia, if not the world. It’s what’s called a Karst Lake – a lake with no visible stream running to or away from it. It’s instead fed and drained by a series of underwater caverns and passages. This also gives the impression hat the lake is bottomless, as they’ve yet to find the underwater streams hat feeds the lake, nor the true bottom. In fact, what they think ‘might’ be the bottom, may just be a shelf over a larger cavern beneath the “floor” of the lake. 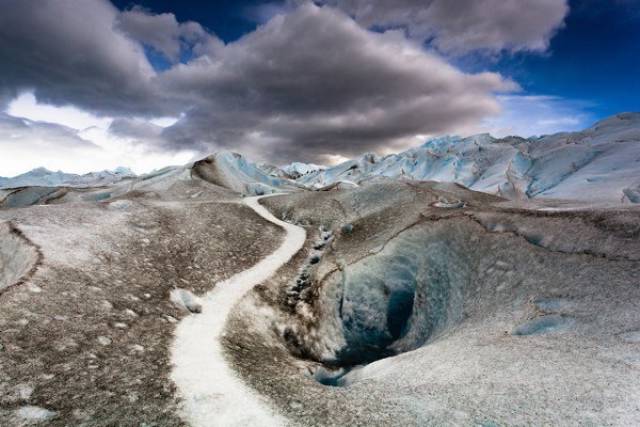 The Patagonian Ice Field is a sheet of ice in Southern Argentina and Chile that is roughly 17,000 square km. This the third largest fresh water source in the world, and it feeds 48 different glaciers, including the Perito Moreno Glacier. This bleak wasteland of snow and ice, is slowly crossing Lake Argentino.

As with most bodies of ice, the majority of it is underwater, but what remains above, is 250 square km of deep ravines and ice peaks, with a 200 foot high wall of ice rising from its leading edge. 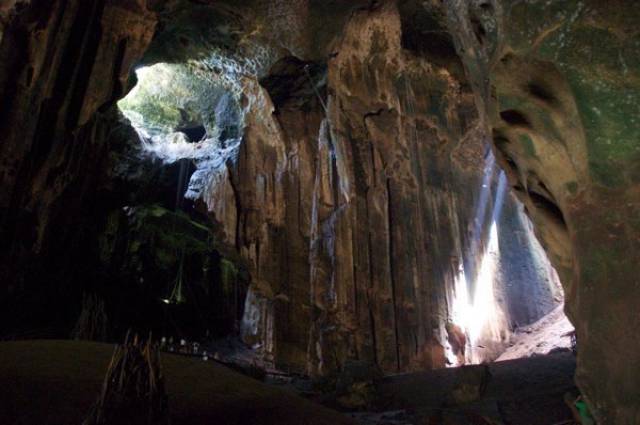 These caves are a series of caves in Malaysia that make up the home of millions of bats and swiftlets. What makes the cave perfect for bats, and hell for us, is all the guano (aka Bat Poop). It’s estimated that at one time, there are more than two million bats that live in the Gomantong Caves and the droppings have nowhere else to go. This means that the floor of the caves are covered in several feet of bat waste.

But that’s not the worst part. In order to even make it that far, you need to cross the Malaysian cockroaches – millions upon millions of them. Their primary food source is bat guano, and they cover the walls and carpet the floor. Even better is that they’re not the only ones. There are also rats, white cave crabs and thousands of giant Scutigera centipedes. 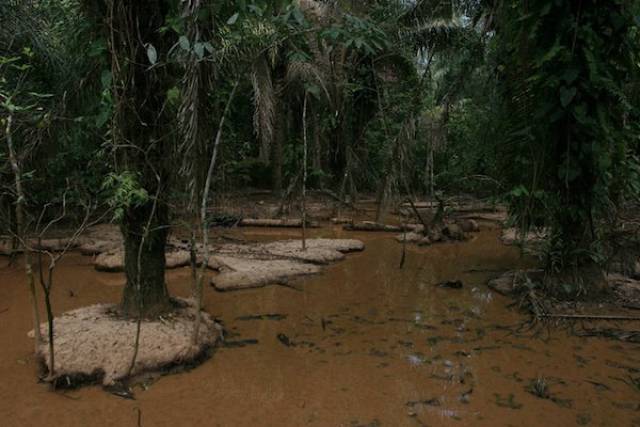 This is one of the most diverse regions in the world, but also the one place that is out to get you the most. Covering most of the ground between the Andes Mountains and the Tuichi River in Bolivia, everything in the park is poisonous. In 1999, a photographer named Joel Sartore spent a month there and barely made it out.

Between the botfly larvae that burrow into your flesh, flaming rashes from just brushing a moth, parasites, parasitic fungi, flesh eating bacteria, and wild pigs that will attack and eat you, it’s not a pleasant place to visit.

Perhaps mother nature’s trying to give us a hint?