The Situation Room, Pete Souza, 2011 Official White House photographers document Presidents at play and at work, on the phone with world leaders and presiding over Oval Office meetings. But sometimes the unique access allows them to capture watershed moments that become our collective memory. On May 1, 2011, Pete Souza was inside the Situation Room as U.S. forces raided Osama bin Laden’s Pakistan compound and killed the terrorist leader. Yet Souza’s picture includes neither the raid nor bin Laden. Instead he captured those watching the secret operation in real time. President Barack Obama made the decision to launch the attack, but like everyone else in the room, he is a mere spectator to its execution. He stares, brow furrowed, at the raid unfolding on monitors. Secretary of State Hillary Clinton covers her mouth, waiting to see its outcome. In a national address that evening from the White House, Obama announced that bin Laden had been killed. Photographs of the dead body have never been released, leaving Souza’s photo and the tension it captured as the only public image of the mom 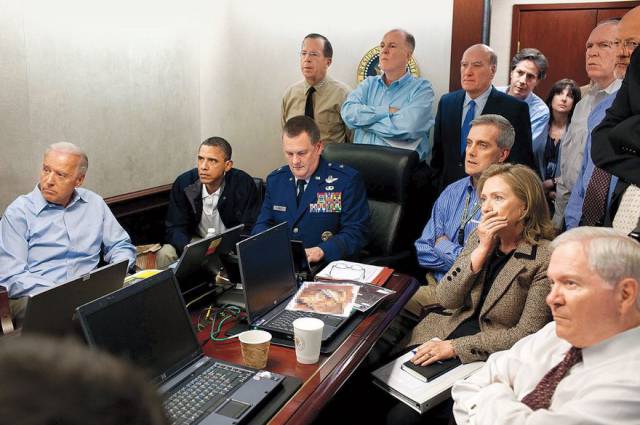