Some Unbelievably Cruel Torture Devices Were Invented Throughout History (25 pics)

Widely used in medieval times, the Stocks were made out of two hinged wooden boards with three holes cut out to fit the head and two arms. Sometimes the feet would also be bound. The torture victim would often be left out in public to be humiliated. On rare occasions, they would die from the elements after being left for days. 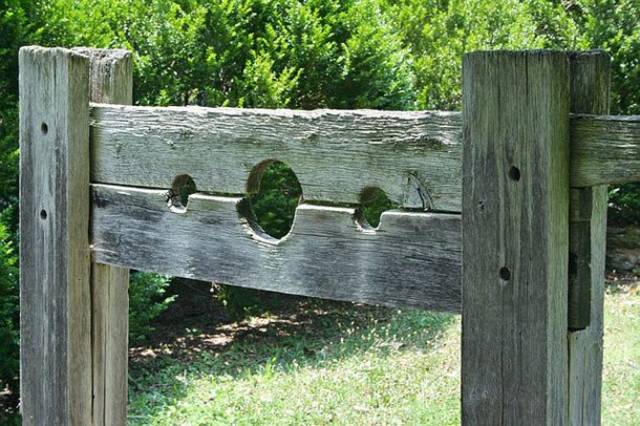 Used during the Spanish Inquisition, water torture isn’t painful so much as psychologically damaging. The victim would be strapped to a chair where tiny droplets of water would fall on their forehead. Over a long period of time, the anxiety and stress would break the strongest person. MythBusters tested it out and concluded its effectiveness. 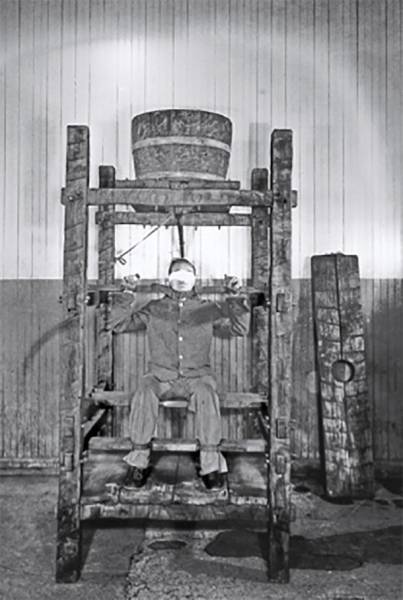 The Strappado was also used during the Spanish Inquisition and a unique way of torturing people. Priests would tie the victim’s hands behind their back and then, using the Strappado, lift and hang them in the air. This would pull their arms up behind their back, likely dislocating them. As you might imagine, this was painful, but the priests also had two ways to make it worse. The first was to slightly drop the victim and then stop them, making the rope snap a bit. The other way was to hang weights from their ankles. 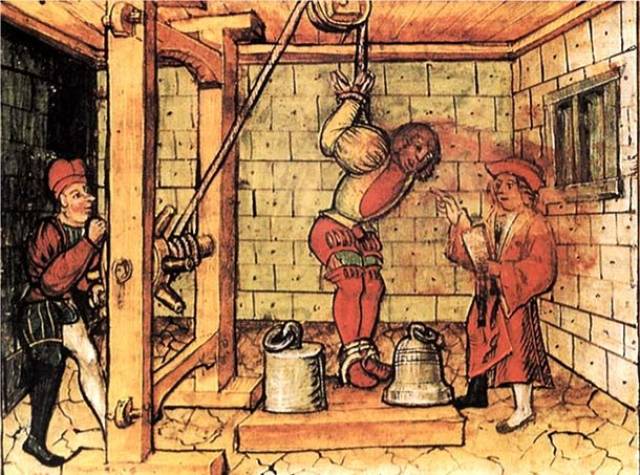 Used during the middle ages, The Rack was a wooden bed with four ropes, two for tying the legs and two others for the arms. The victim would slowly have their arms and legs pulled until they dislocated, the bones broke, and sometimes the limb came off entirely. It was used to try to extract confessions from heretics or traitors. 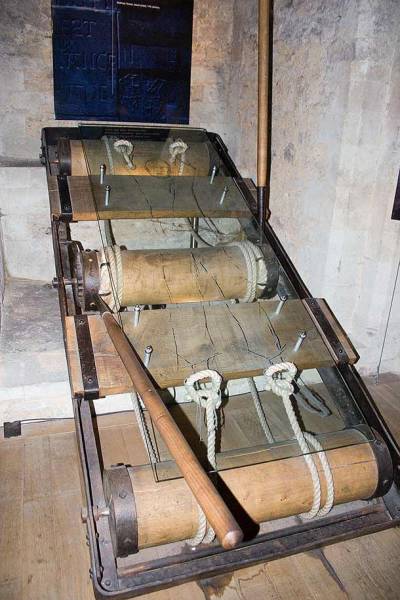 Tean Zu was a form of Chinese torture. It used a device that tied sticks and strings to the victim’s fingers. If the victim didn’t confess or give the information needed, the device would slowly crush and break the fingers. 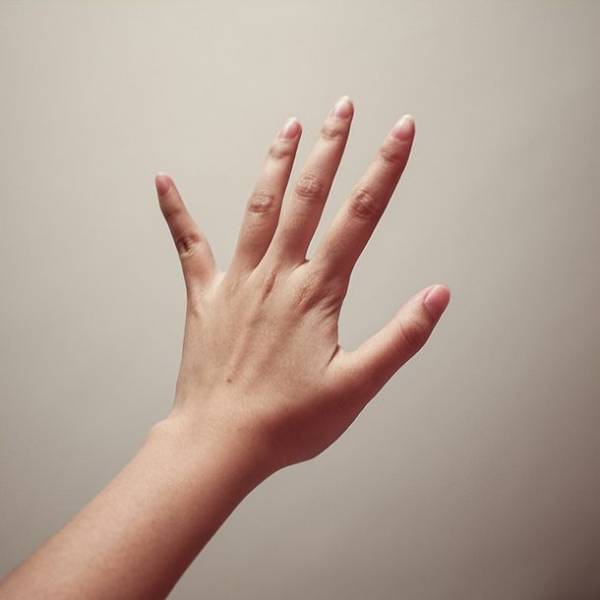 To punish their wives for gossiping, husbands in the middle ages would use the Scold’s Bridle. It involved strips of iron attached to a muzzle that was placed around the woman’s head to keep her quiet and humiliate her. Often, the victim would be brought to town to show everyone that she’d been gossiping. 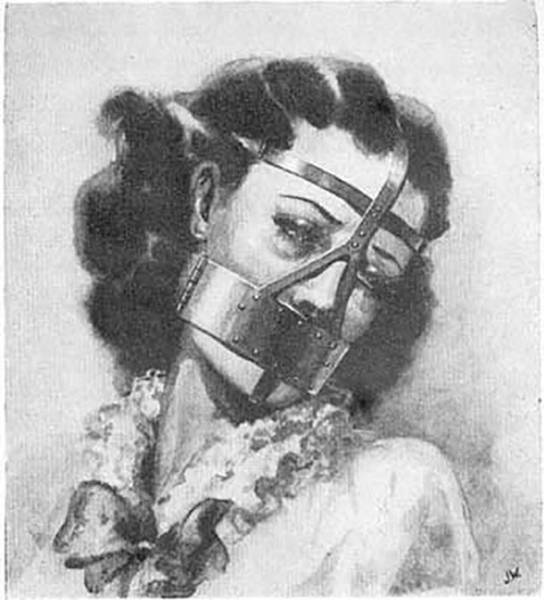 A terrifying Medieval torture device, the Iron Chair invoked about as much fear looking at it as being subjected to it. Covered in hundreds of sharp spikes, the victim would be forced to sit on it. They’d then be strapped down and the torturers would light a fire underneath the chair to roast the victim. 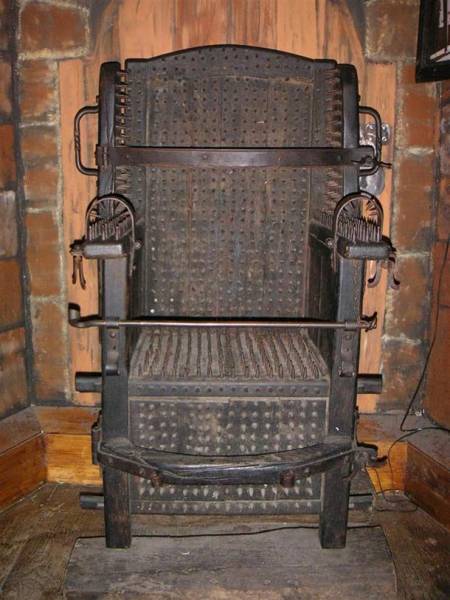 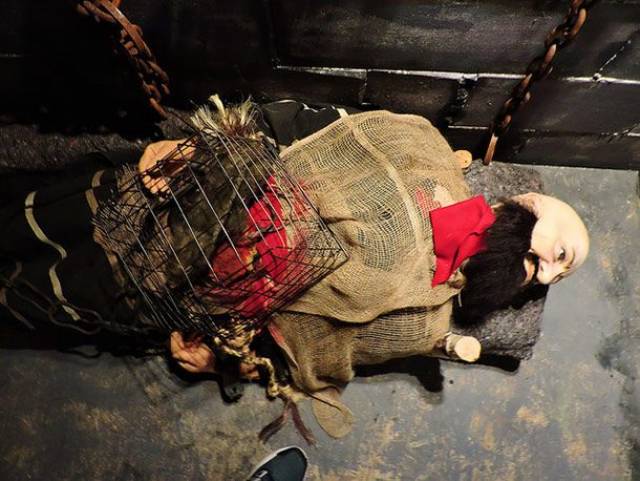 Also known as the Breaking Wheel, the Catherine Wheel was a popular torture method during Medieval times. Victims would have their limbs broken and placed through the spokes of the large wheel. Then the wheel would be placed on top of a pole and their bodies would be left to burn under the hot sun and be picked at by the crows. Sometimes the wheel would have spikes mounted on it. 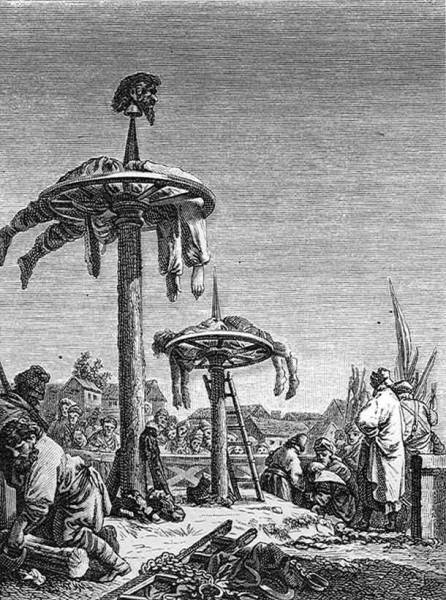 Using large strips of iron, blacksmiths in the middle ages would create a hollow coffin in the shape of a person. Victims would be forced inside and hung up to die under the scorching hot sun while being eaten by animals. The Wooden Horse, also known as the Spanish Horse, was used during the Spanish Inquisition. The victim would first be stripped naked and their arms and legs would be tied to the horse as they sat on it. With their feet not touching the ground to take off any pressure, it would be extremely painful and ended usually in the rupturing of the perineum and extensive blood loss. 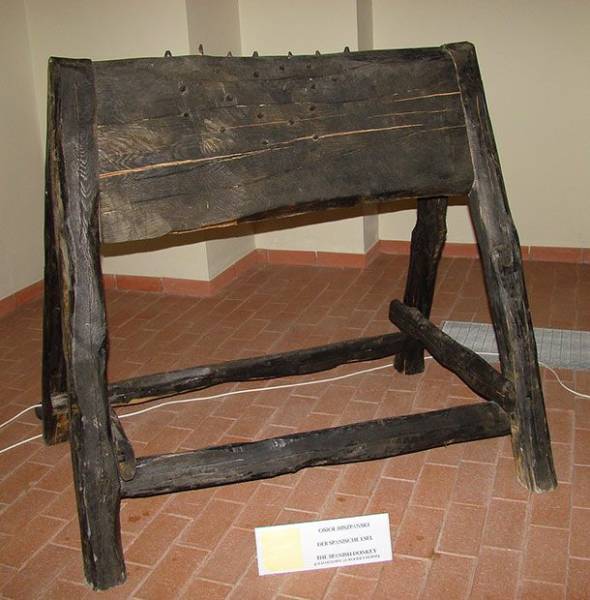 The Thumbscrew was similar to the Chinese Tien Zu. Using a metal clamp, the victim’s thumbs would be inserted and the clamp would slowly close on the thumbs. If the victim didn’t confess or provide information, their thumbs would endure horrible pain before breaking altogether. 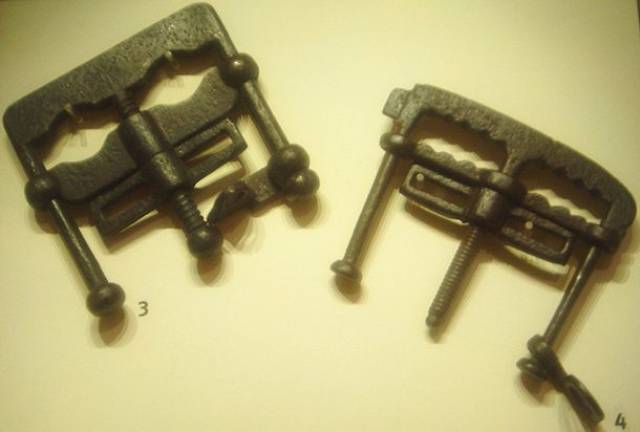 Invented by a British man named Skevington, the Scavenger’s Daughter was a popular torture device during the reign of Queen Elizabeth I. It was a hoop of iron with a hinge in the middle. The victim would be forced to crouch on one half of the hoop while the other was placed over his back. The hinge would be slowly tightened, crushing the victim’s back and breaking breastbones and ribs. 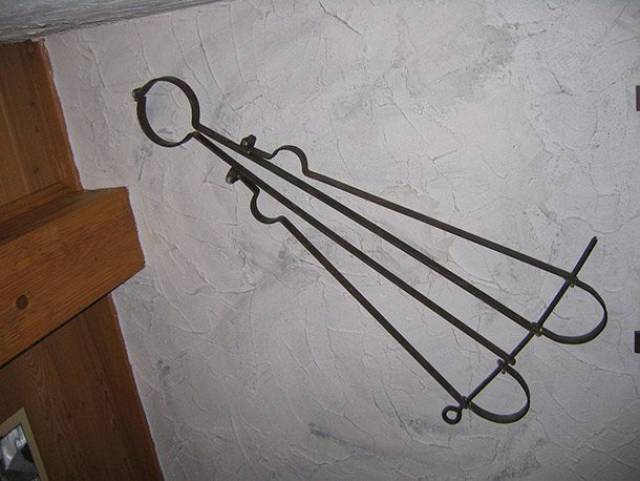 The Judas Chair was a wooden device with a pyramid on top of four legs, looking essentially like a chair from hell. The victim would be tied up by ropes while their legs would be tied together to another rope. Their anus or vagina would be inserted into the pointed edge of the pyramid while the torturer would pull on the rope attached to their legs.

As you might have guessed, the Heretic’s Fork was invented during the Spanish Inquisition. The fork would have two pointed edges on each end and would be attached to a leather strap that would go around the victim’s neck. One pointed end went just underneath the victim’s chin while the other would be pointed down into the person’s sternum. Even the slightest movement of the jaw would result in unbelievable anguish. If used, it would almost always be a prelude to being burned at the stake. 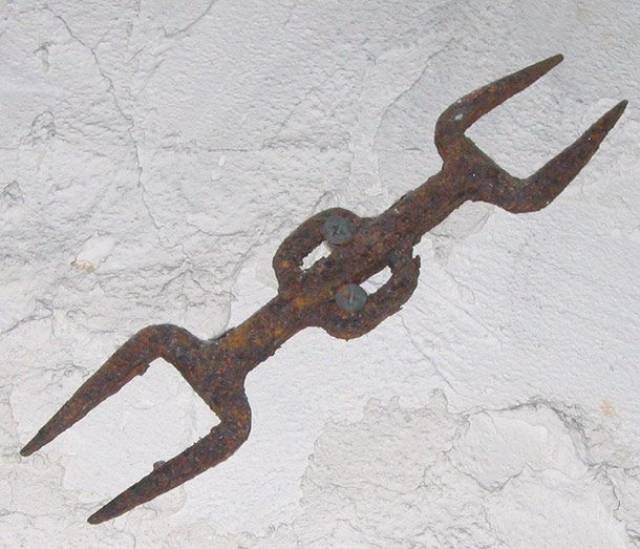 Used in Germany, the Instep Borer was a nasty way to torture a person’s foot. The victim would have their bare foot placed inside a metal shoe. Slowly, the torturer would twist a crank and a sharp spike would gradually burrow into the victim’s foot. The wound was so large, it was common for the victim to die of a bacterial infection. 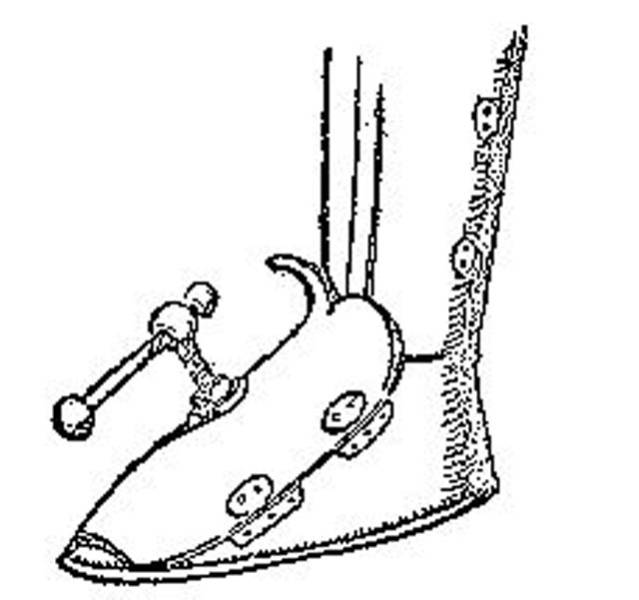 The Knee Splitter was used during the Inquisition as a form of punishment and torture. With spikes on the top and bottom of two small planks, the leg was placed in between them and the spikes slowly enclosed around the knee, rendering it useless. The number of spikes depended on the device, but it would range between 3 and 20 spikes. Sometimes they even heated the spikes before impaling the knee. 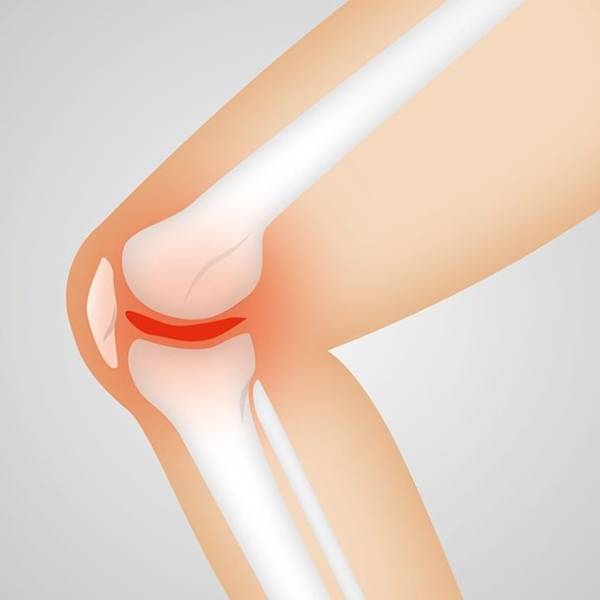 You can probably guess what the intestinal crank does, but we’ll tell you anyway. The torturer would make an incision in the abdomen and attach the upper part of the intestine to a crank. By turning the crank, it would extract the intestines from the victim while they were still alive. They would eventually die, but it would be a long, slow, and painful process. 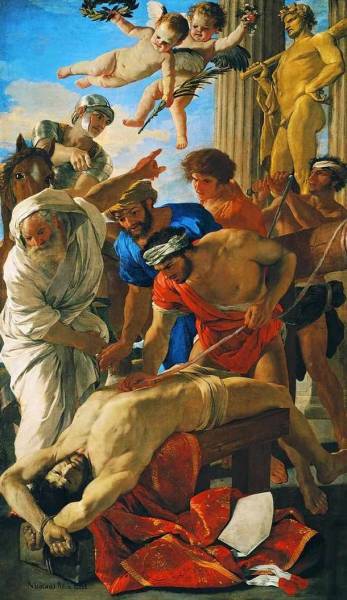 Of the many torture devices used in ancient times, the Pear of Anguish is likely one of the worst. A metal device with four “leaves,” it would be inserted into the vagina, anus, or throat depending on the crime committed. When a key was turned, the leaves would open, causing critical and massive internal damage. It would rarely kill the victim, however, and more torture would continue. 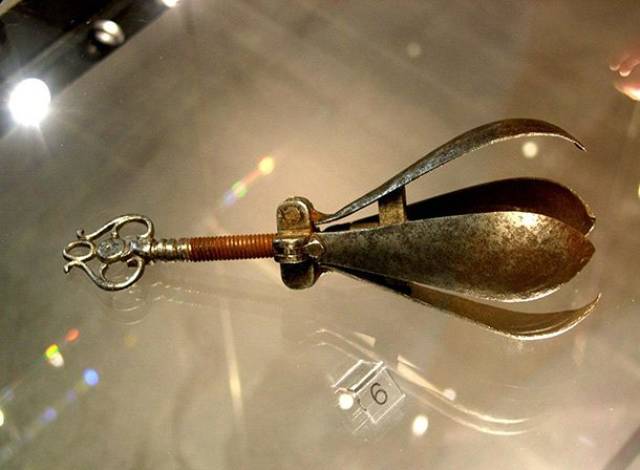 The Brazen Bull is an old torture device thought to first be created by a Greek man named Perillus. The torture device is a bronze statue of a bull. The victims would have their tongues cut out and their hands tied before being placed inside the bronze bull. A fire would be lit underneath the bull to roast the victim inside while people listened. Their horrified screaming resembled the sound a bull might make. Legend has it that when Perillus presented the device to the tyrant Phalaris of Agrigentum, rather than being rewarded for his creativity, Phalaris made Perillus be the first to go inside. 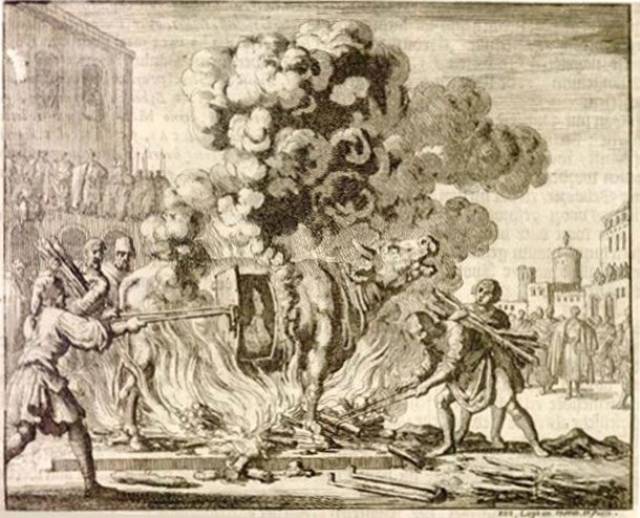 In ancient times, women would be subject to particularly cruel torture. The Breast Ripper is definitely one of those sad and tragic cases. As the name implies, one part of the device would be a claw that sunk into the woman’s breast. They were then tied to a wall and the claw would be ripped away, tearing their breast to shreds. 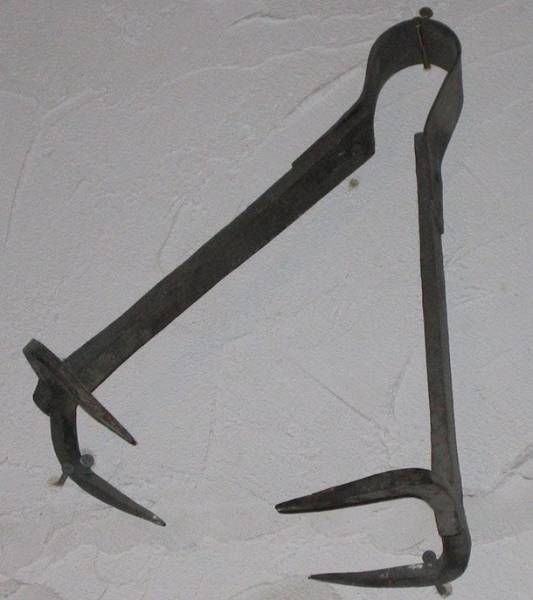 One of the most well-known and infamous torture devices, the Iron Maiden is a large sarcophagus with strategically placed spikes on the inside and on the door. Once the victim went inside, the door would be closed, piercing vital organs. However, the victim wouldn’t die instantly and would likely be alive, bleeding to death. Originally, people thought it was a fictional device, but they found a real one in Nuremberg, Germany in the 1800’s. The Head Crusher pretty much describes this torture device perfectly. The victim would have their chin placed on a metal bar as a cap would be tightened to the top of their head. The torturer would twist the crank, crushing the head. First, the teeth would break, then the jaw, and eventually the eyes would pop out of their sockets. If they didn’t die and were released, they would obviously suffer irreversible brain damage. 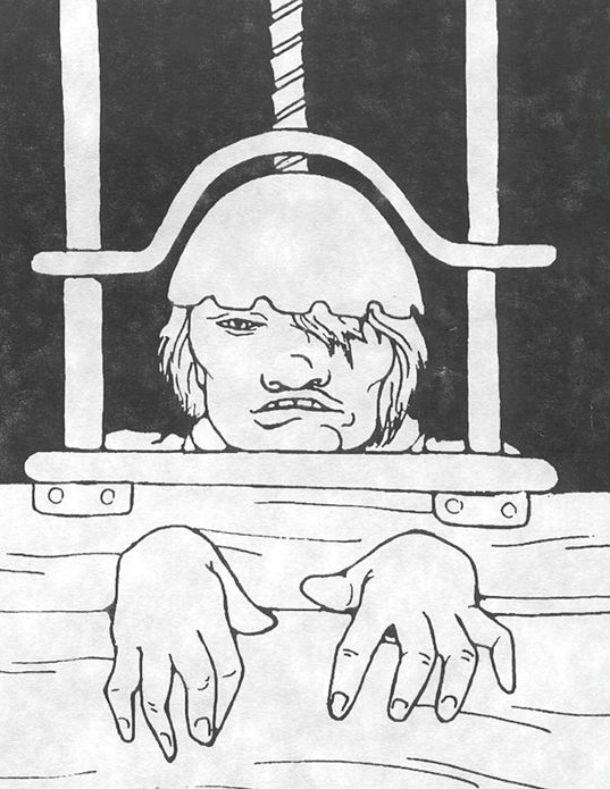 The Boots had several variations of torture. Some torturers attached leather boots around the victim’s feet and poured scalding hot water over them. The water was so hot, it dissolved the flesh and sometimes ate through the bone. In other variations, foot roasting was common. The victim’s foot would be slathered with lard and roasted over a fire. 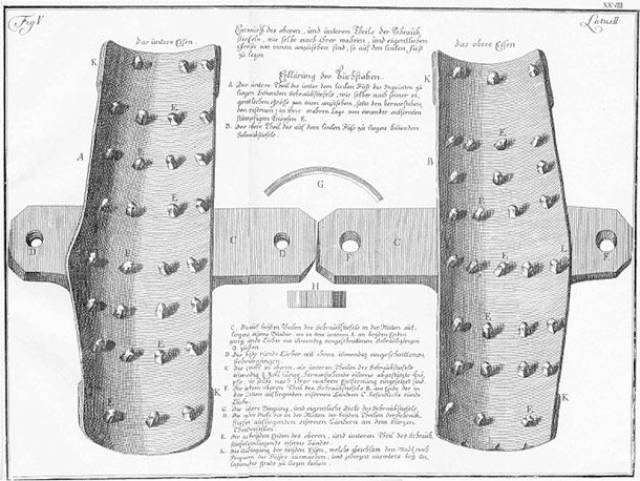 Popular both in Europe and China from the time of the Roman Empire to the Inquisition, sawing people in half with a large two person saw was a relatively cheap and effective way to punish and torture someone. In some cases, the Chinese liked to hang their victims upside down which had the effect of keeping them alive for longer. 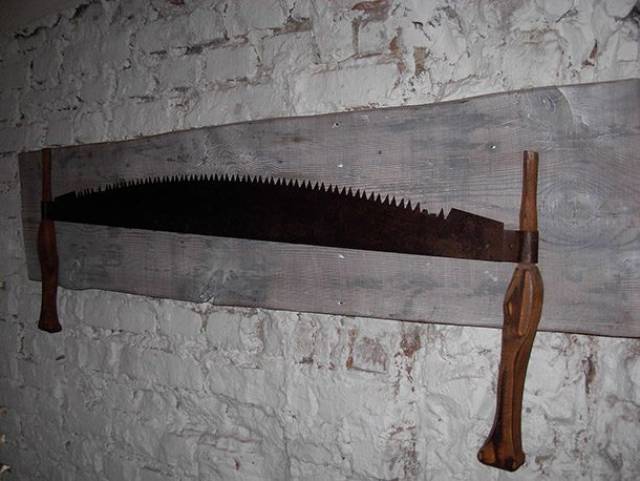 Varan1 2 year s ago
Mostly Victorian fakes, but here we are.
Reply