“The Office” Scenes You Might Have Forgotten, But Shouldn’t Have (24 pics + 17 gifs)

When Andy asked Erin to fake a phone call to make his client feel important and she took it one step too far:

When everyone forgot about the Christmas party and Nellie suggested they have mini cupcakes:

When Phyllis got a 50 Shades of Grey audiobook and wouldn't stop dry humping the air:

And so Dwight had to pour a bucket of water on her to get her to stop:

When Michael showed up a tad early for his interview with David Wallace: 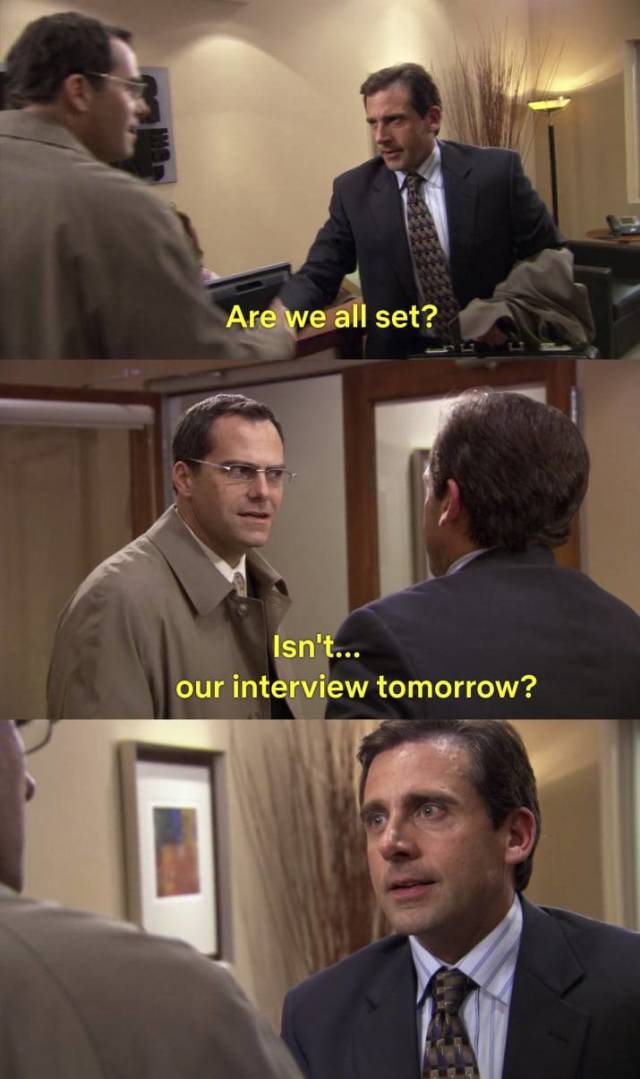 When Michael got gum in his hair after bending down on the ground because he thought he saw a quarter:

And then when Dwight tried to get it out with peanut butter: 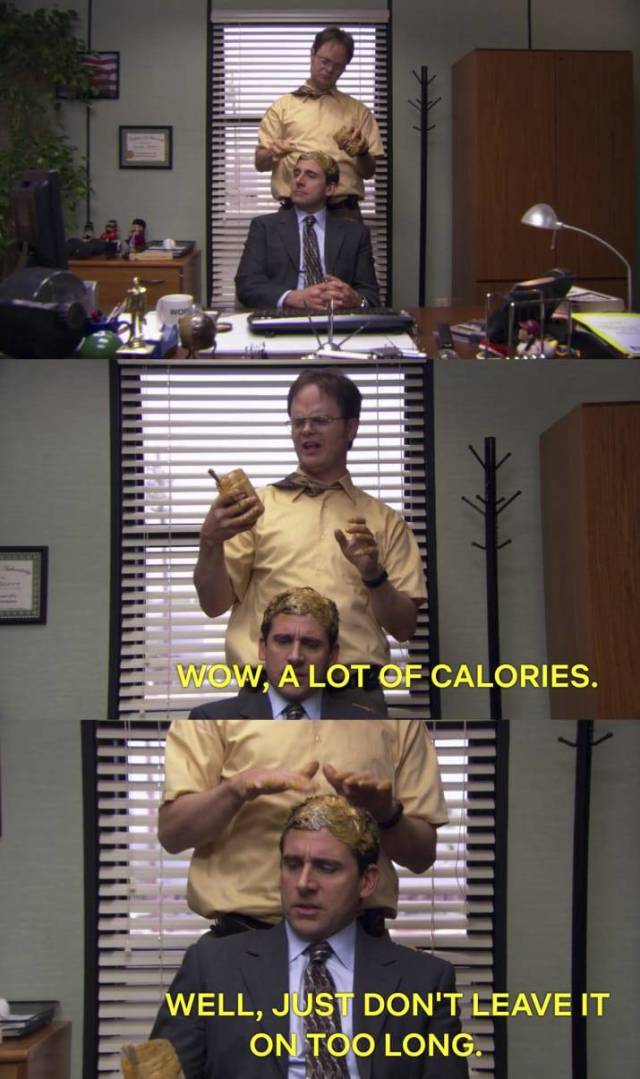 When Kelly was really into Stanley's costume:

When Meredith revealed that she attended Prince William and Kate's wedding:

When Dwight tried to improve his dexterity by doing everything with his feet:

When Jim made it look like Dwight murdered him in his hotel room:

When Kevin took over reception duties for the office: 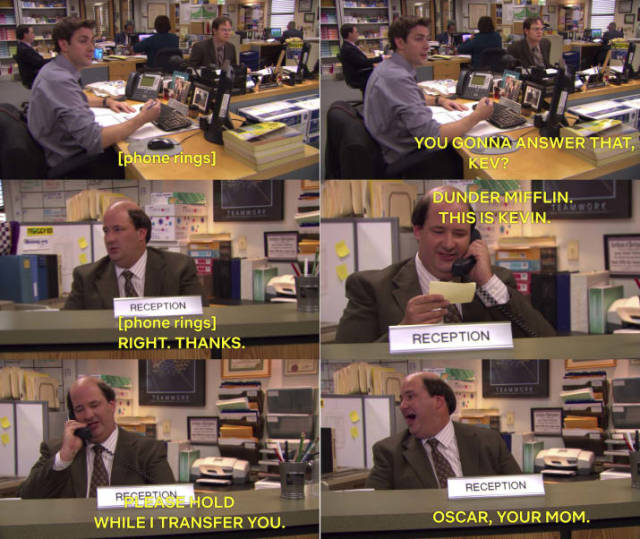 When everyone tried to remember if Stanley, who they have worked with for over a decade, had a mustache:

When Jim fooled Dwight into thinking an actor friend of his has actually been Jim the entire time:

When everyone cheered as the DVD logo hit the corner of the TV screen, which caused Michael to think that they were cheering for his great meeting:

When Creed was Regional Manager and apparently thought Dunder Mifflin had a valet: 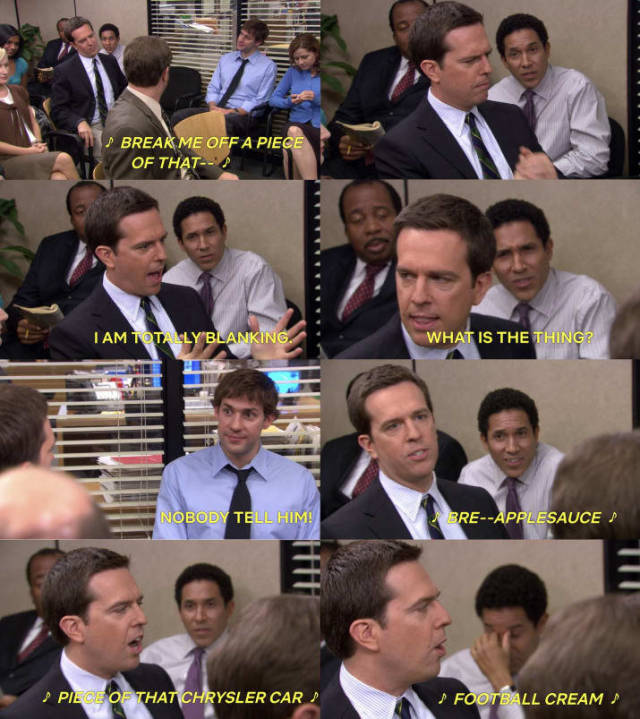 When Dwight tried to convince Toby to let him cook a goose that he accidentally ran over with his car: 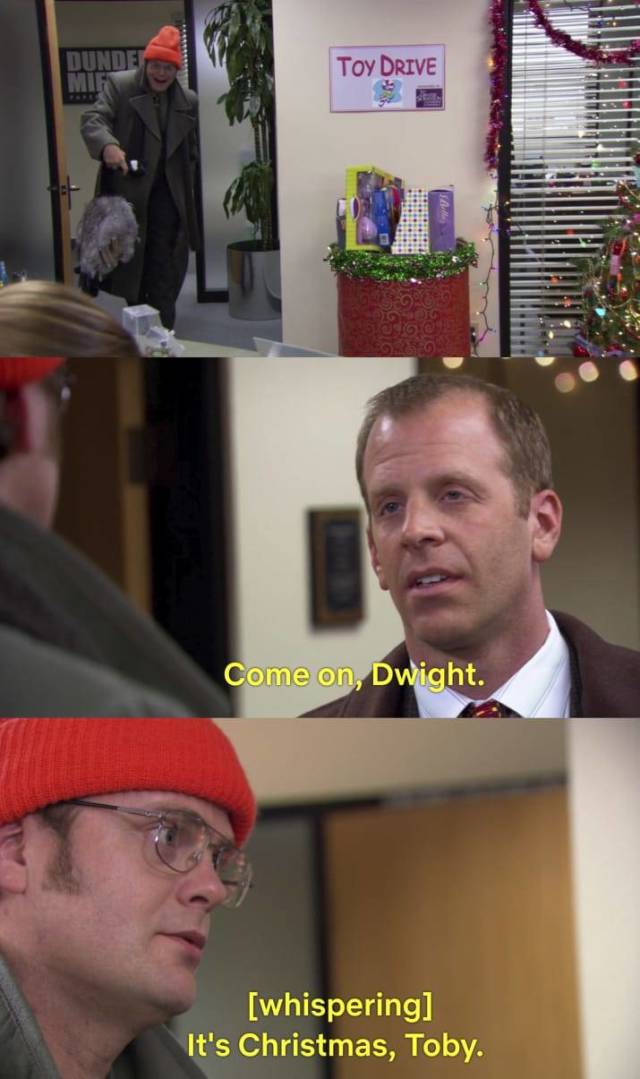 When Oscar tried to make an "It Gets Better" video, but was constantly interrupted:

When Michael and Deangelo hand-delivered the Dundee nominees to everyone’s homes: 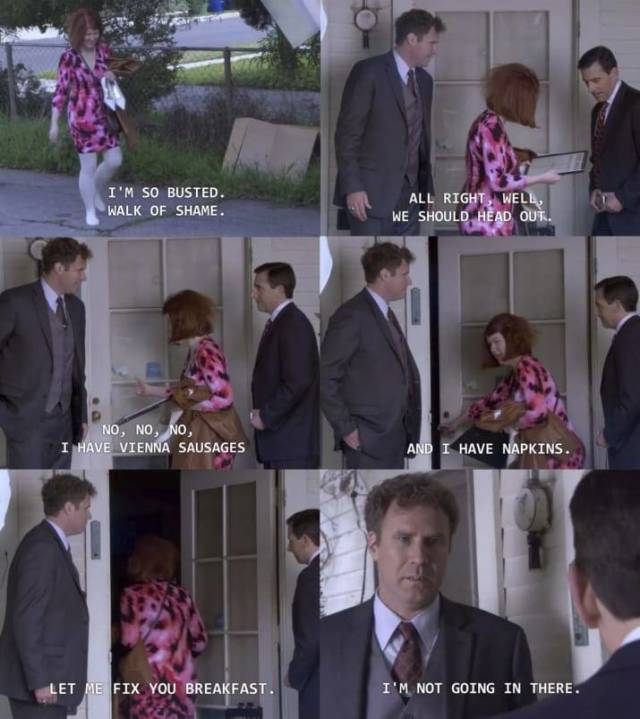 When everyone watched a balloon in the warehouse slowly deflate:

When the office challenged themselves to see how long they could stay silent: 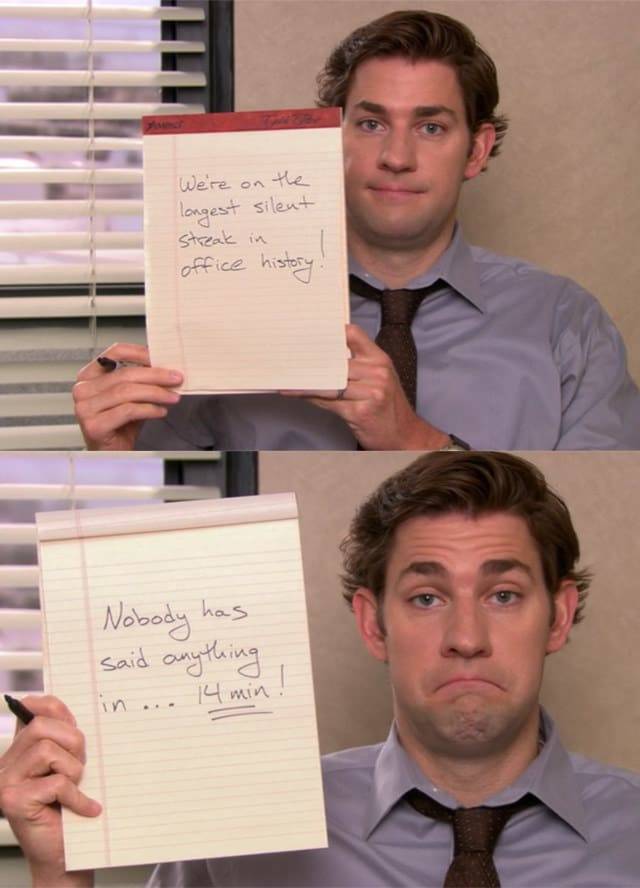 And then when Kevin went and ruined it by eating a really good candy bar:

When Dwight showed up as the one and only Recyclops:

When Dwight showed off his new daycare center for the office: 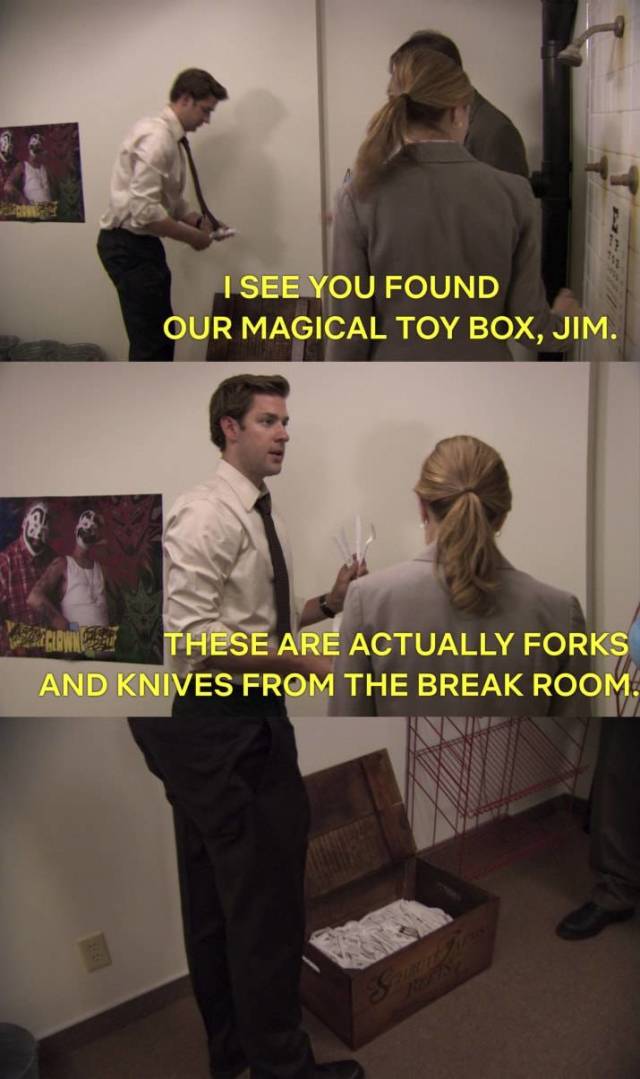 When Meredith begged for no fighting on her holy day: 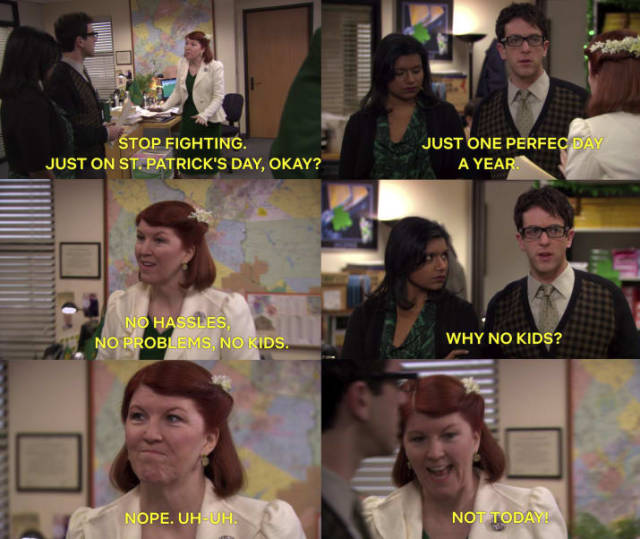 When Michael backed into a car while trying to parallel park in a huge space:

And then proceeded to park in a much tighter space and crawl out of his car: 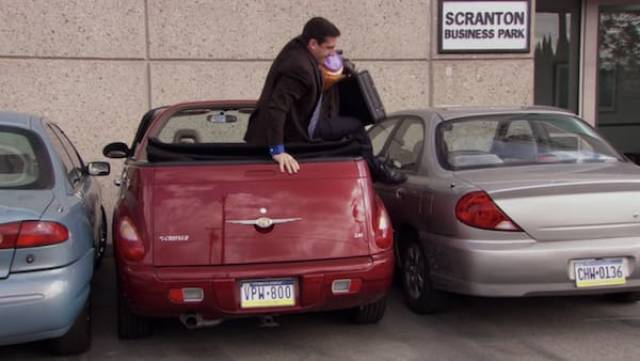 When the employees of the Michael Scott Paper Company did trick shots with cheese balls:

When Michael realized he had made a terrible financial mistake:

When Dwight's KBG joke backfired on him:

When Michael found out that Jim and Pam were engaged:

When Michael showed off his Levi jeans on Casual Friday:

When Dwight gave birth to a watermelon: 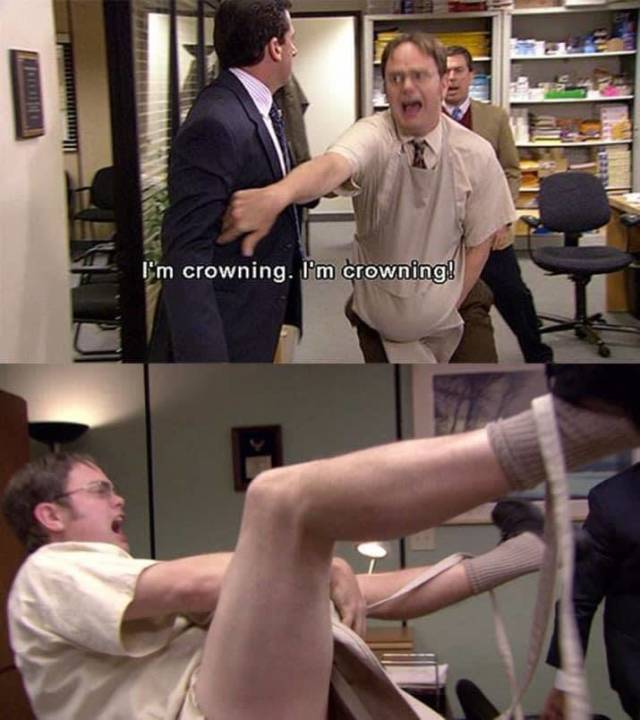 When Dwight held a martial arts seminar, and Jim convinced him that the only worthy opponent…is himself:

And finally, when everyone tried to figure out how long it would take for Stanley to pay attention to his surroundings: