What Meanings Tattoos In Russian Prisons Have (15 pics)

In jails and prisons around the world, tattoos can become a significant part of an inmate’s uniform, not only marking the crime they’re in for but also serving as a way to communicate with others. In Russia, for instance, a dagger through the neck suggests that an inmate has murdered someone in prison and is available to carry out hits for others-meaning, if you see that guy walking toward your cell once all the guards have disappeared, you should run the fuck away.

Arkady Bronnikov is regarded as Russia’s leading expert on tattoo iconography. He was a senior expert in criminalistics at the USSR Ministry of Internal Affairs for over 30 years.

As part of his duties he visited many correctional institutions of the Ural and Siberia regions, where he interviewed and photographed thousands of convicts. He regularly helped solve criminal cases across Russia by using his collection of tattoos to identify culprits and corpses.

He released a collection of around 180 photographs of criminals locked up in Soviet penal institutes. Russian Criminal Tattoo Police Files, published by FUEL, is probably the largest collection of prison tattoo photographs to date, at 256 pages. 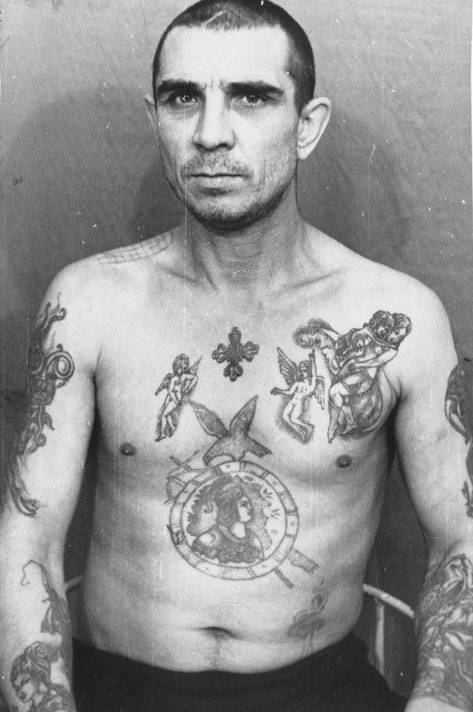 The tattoos on this inmate mimic those of higher ranking criminals. They indicate the bearer has adopted a thief’s mentality. However, he does not wear the ‘thief’s stars;’ he is not a ‘vor v zakone’ or ‘thief-in-law,’ and therefore holds no real power among this caste. 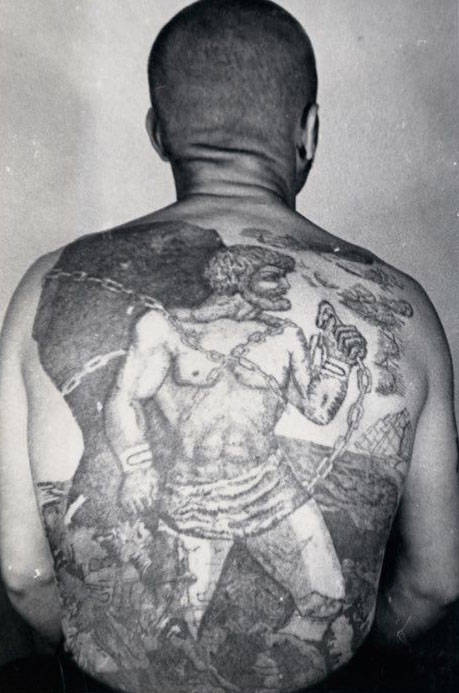 This tattoo is a variation on the myth of Pometheus, who, after tricking Zeus, is chained to a rock in eternal punishment. The sailing ship with white sails means the bearer does not engage in normal work; he is a traveling thief prone to escape. 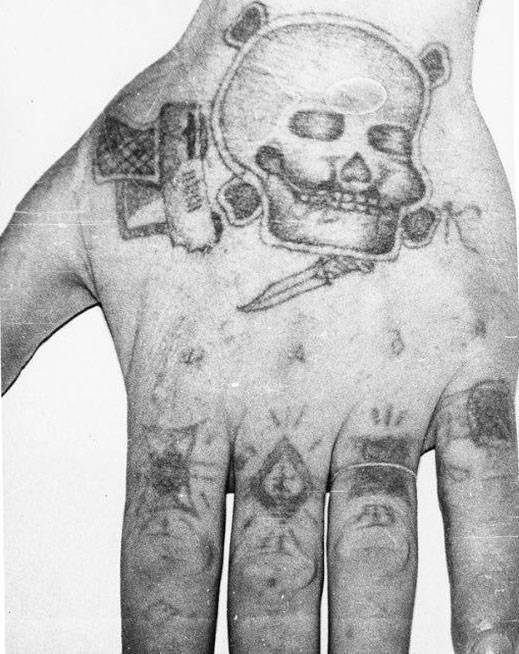 Text across the knuckes reads NADYA (womans name). The ‘ring’ on the forefinger stands for ‘Rely on no one but yourself’, a ‘patsan’ one of the most privileged inmates VTK. Middle finger ‘the thieves cross’ of a pickpocket. Third finger: ‘I served my time in full’, ‘From start to finish’, ‘Went without parole’, the prisoner served his complete sentence with no remission for working with the system. Little finger ‘The dark life’ the bearer spent a lot of time in a punishment cell. The skull and crossbones, gun, knife and letter ‘K’[iller] denote a murderer. 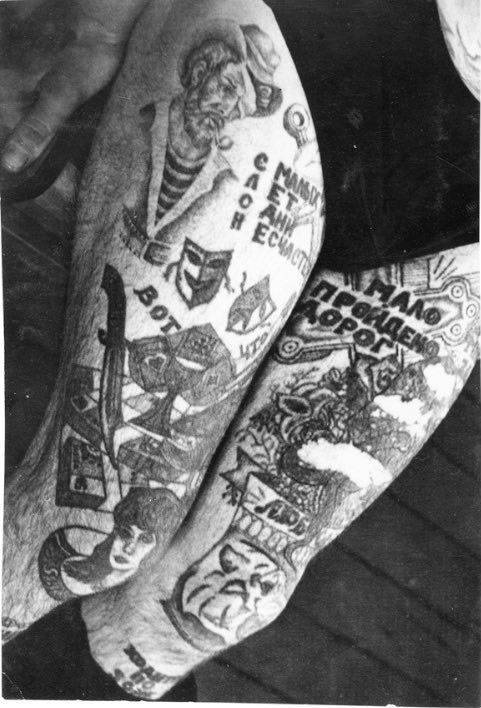 On his right leg is the acronym ‘SLON: S malih Let Odni Neschastya,’ which translates to ‘Only Misfortunes from an Early Age.’ Text under this reads ‘Here is what [is killing us].’ The dagger, cards and money are a variation of the popular tattoo ‘These are the things that destroy us.’ Text at the top of the left leg reads ‘Few roads have been walked.’ Text by the knee reads ‘Love.’ Text on the shin reads ‘It [the leg] walks around the zone.’ The theatre masks on the right leg represent happiness (before prison) and sadness (after prison). 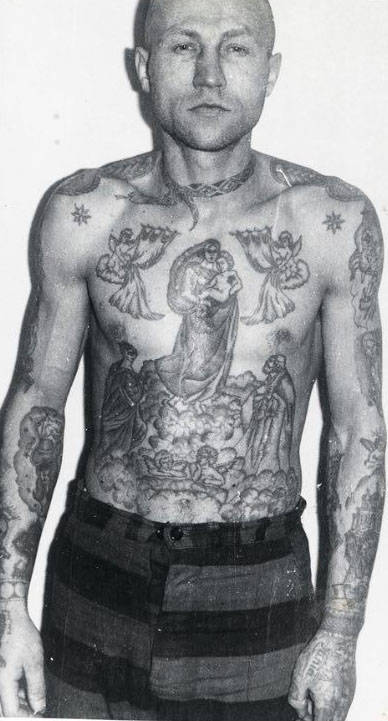 A snake around the neck is a sign of drug addiction. The stars on the clavicles and epaulettes on the shoulders show that this inmate is a criminal authority. The Madonna and child is one of the most popular tattoos worn by criminals — there can be a number of meanings. It can symbolise loyalty to a criminal clan; it can mean the wearer believes the Mother of God will ward off evil; or it can indicate the wearer has been behind bars from an early age. 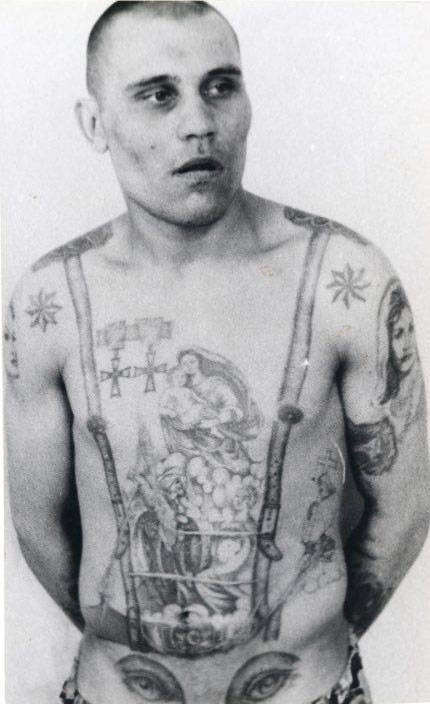 The stars on the shoulders show that this inmate is a criminal authority. The medals are awards that existed before the revolution and, as such, are signs of antagonism and defiance toward the Soviet regime. The eyes on the stomach denote a homosexual (the penis makes the ‘nose’ of the face). 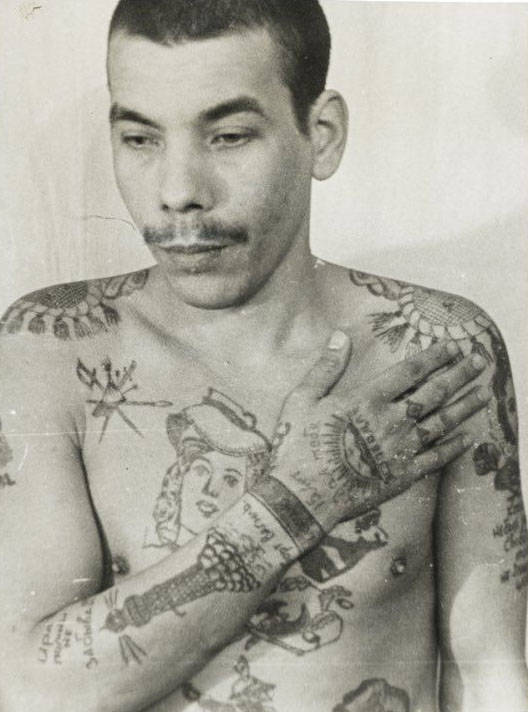 This man is a Muslim; his features also indicate he is not Russian. Text on the arm reads ‘Remember me, don’t forget me’ and ‘I waited 15 years for you.’ On his stomach (left) is a religious building with a crescent moon. He is not an authoritative thief, but has tried to imitate them with his tattoos to increase his standing within the prison. The lighthouse on his right arm denotes a pursuit of freedom. Each wrist manacle indicates a sentence of more than five years in prison. 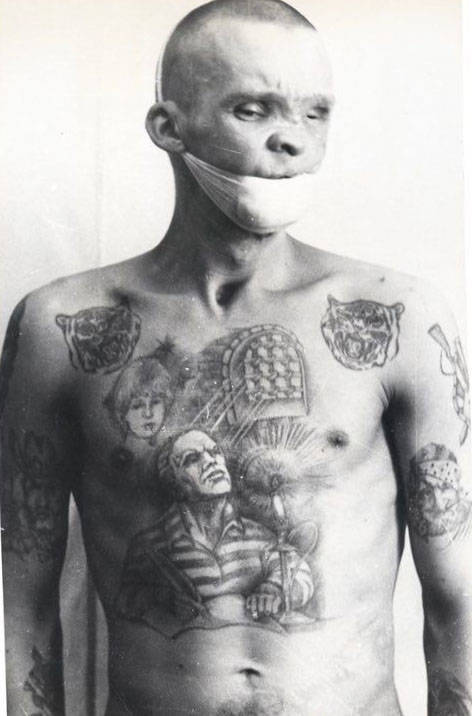 This prisoner is a victim of syphilis and has suffered severe scarring to his face, eyes and mouth. In the prisons and colonies, male or female prisoners suffering from venereal diseases (such as syphilis) are known as ‘buketniki,’ bouquet holders. They are also nicknamed after army ranks, depending on how advanced their condition is; for example, ‘Kolka whored around without taking any precautions. Yesterday the medic told me that he was already a “lieutenant.”‘ (An inmate suffering from second-stage syphilis is known as a ‘colonel,’ third-stage a ‘general.’) There are cases where people have contracted syphilis, AIDS and tetanus while getting tattoos under insanitary prison conditions. Tattooing is forbidden in the prisons and camps, prosecuted and punished severely by the authorities. The practice has acquired more status as it gets pushed underground. 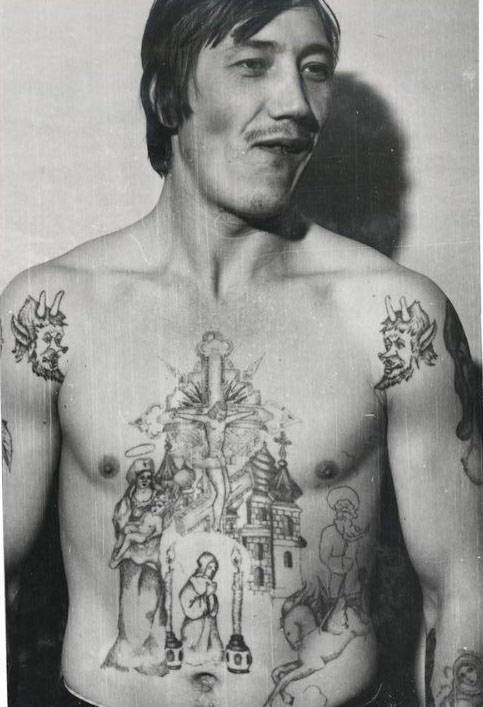 The devils on the shoulders of this inmate symbolise a hatred of authority and the prison structure. This type of tattoo is known as an ‘oskal,’ or grin, a baring of teeth towards the system. They are sometimes accompanied by anti-Soviet texts. 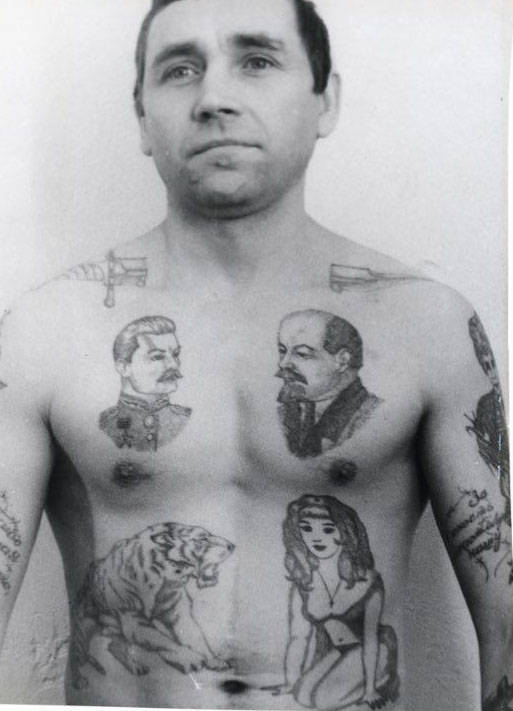 Text on the arm reads ‘Thank you Dear Motherland for my ruined youth.’ A dagger through the neck shows that a criminal has committed murder in prison and is available to hire for further killing. The drops of blood can signify the number of murders committed. Lenin is held by many criminals to be the chief ‘pakhan’ (boss) of the Communist Party. The letters BOP, which are sometimes tattooed under his image, carry a double meaning: The acronym stands for ‘Leader of the October Revolution’ but also spells the Russian word ‘VOR’ (thief). 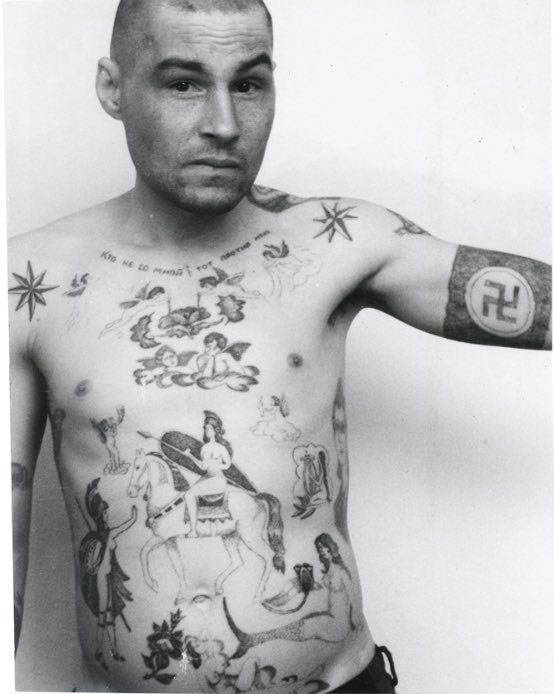 Text across the chest reads ‘He who is not with me is against me.’ The swastika and Nazi symbols may mean the owner has fascist sympathies, though they are more usually made as a protest and display of aggression toward the prison or camp administration. During the Soviet period the authorities often removed these tattoos by force either surgically or by using an etching method. A tattoo of a mermaid can indicate a sentence for rape of a minor, or child molestation. In prison jargon the nickname for a person who commits this type of crime is ‘amurik,’ meaning ‘cupid’, ‘shaggy,’ or a universal ‘all rounder.’ They are ‘lowered’ in status by being forcibly sodomised by other prisoners, sometimes in groups. 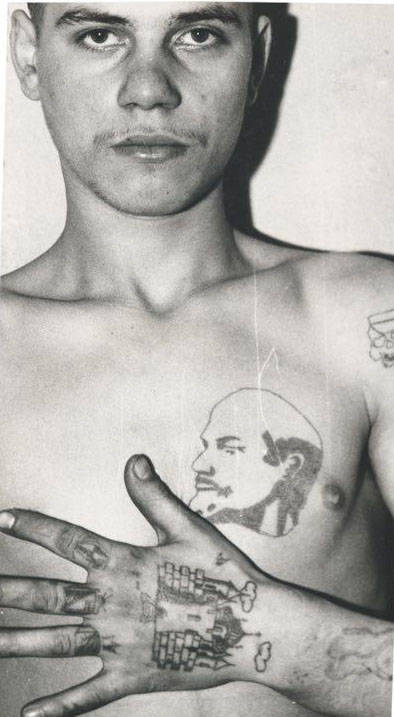 On the index finger is a variant of an otritsala ring, denoting someone who is hostile to law-enforcement and the regime. They cannot be re-educated. Middle finger ‘Freedom for the youth’ or ‘I’ve done time and I will steal again’. Third finger ‘Ruined youth’, the bearer was convicted as a juvenile. The five dots on the wrist are a common sign of someone familiar with the prison regime. They signify ‘Four watchtowers and me’ or ‘I’ve been through the zone’, an inmate who has served a sentence in a correctional labour or penal colony. Lenin is held by many criminals to be the chief pakhan (boss) of the Communist Party. The letters BOP, which are sometimes tattooed under his image, carry a double meaning. The acronym stands for ‘Leader of the October Revolution’ but also spells the Russian word VOR (thief). 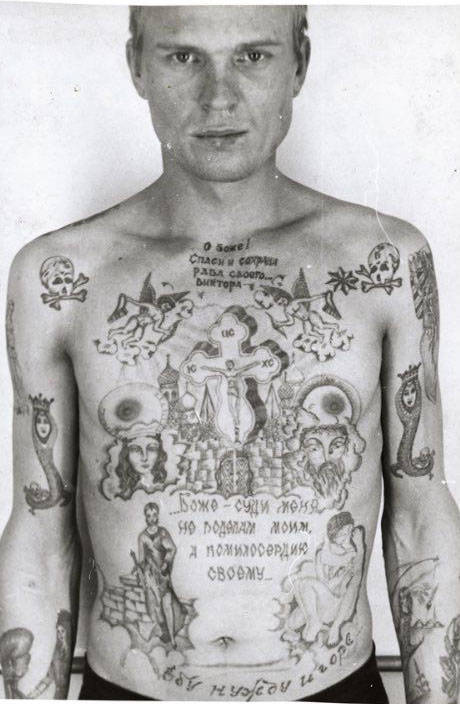 Text above the cross reads ‘O Lord, Save and Protect your servant Viktor.’ Text beneath reads ‘God do not judge me by my deeds but by your mercy.’ Text above the waist reads ‘I fuck poverty and misfortune.’ The skull and crossbones show the prisoner is serving a life term. The single eight-pointed star denotes that he is a ‘semi-authority’ among thieves. The girl catching her dress with a fishing line on his left forearm is a tattoo worn by hooligans and rapists. The snake coiled around human remains (positioned on the middle third of each arm) is a variation on an old thieves’ tattoo. The snake is a symbol of temptation; here the snake’s head has been replaced by that of a woman, the temptress. Tattooed on the right side of the stomach is a version of Judith (1504) as painted by Giorgione; this is intended as a symbol of a scheming, seductive woman who betrays a noble man. 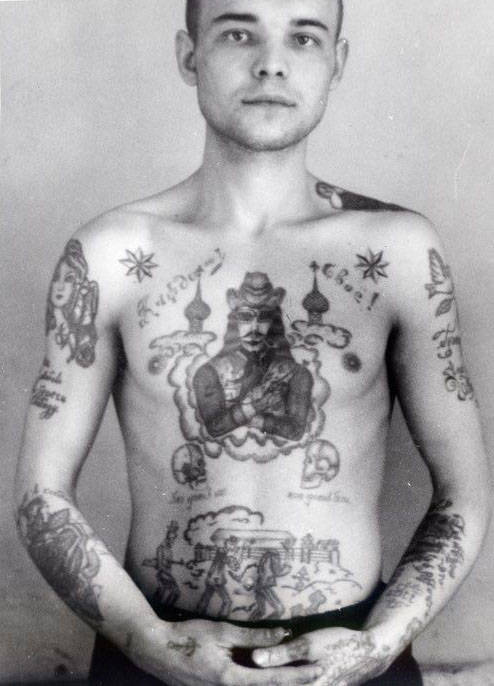 Text on the right arm reads ‘Save love, keep freedom.’ Text on the left arm reads ‘Sinner.’ Text across the chest reads ‘To each his own.’ Text underneath the skulls reads ‘God against everyone, everyone against God.’ Text on the wrist in German reads ‘Mein Gott’ (My God). A cowboy with a gun shows this thief is prepared to take risks and is ready to exploit any opportunity. A dove carrying a twig (left shoulder) is a symbol of good tidings and deliverance from suffering. 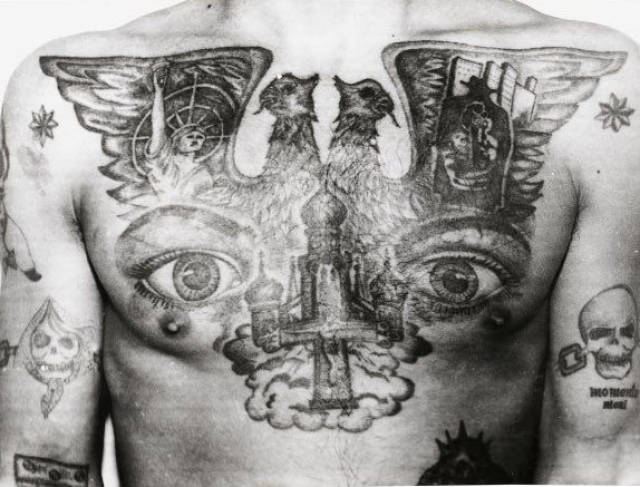 On the arm beneath the skull is the Latin phrase ‘Momento mori,’ meaning ‘Remember that you will die.’ The double-headed eagle is a Russian state symbol that dates back to the 15th century and was used by Peter the Great. In 1993, after the fall of Communism, it replaced the hammer and sickle as the coat of arms of the Russian Federation. This photograph taken in the Soviet period, shows this emblem tattooed as a bold symbol of power and rage against the USSR. It can also be interpreted as ‘Russia for the Russians.’ The Statue of Liberty infers a longing for freedom, while the dark character holding a gun denotes a readiness to commit violence and murder. The eyes on the chest signify ‘I can see everything’ and ‘I am watching,’ the powerful tattoo of a criminal ‘overseer.’ The eight-pointed stars tattooed on the shoulders mark the bearer as an ‘authoritative’ thief.