As National Geographic Travel Photo Contest 2019 Comes To An End, Let’s Take A Look At This Year’s Winners (26 pics) 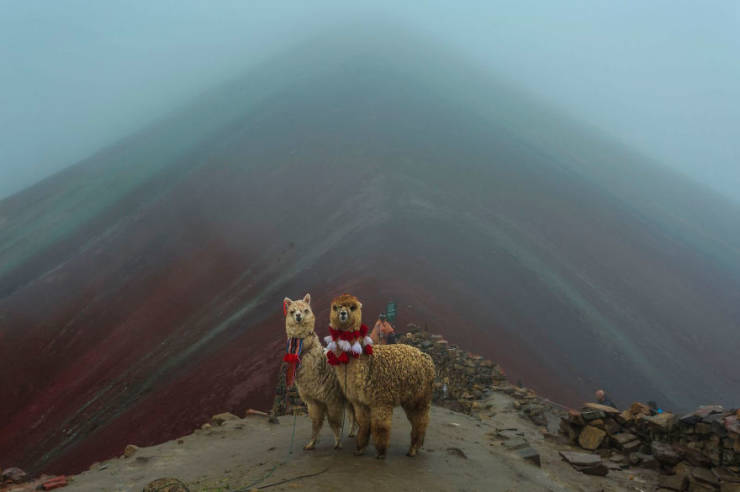 Instead of taking the bus tour to Rainbow Mountain, I camped the night before, about an hour and a half away, to be the first up at sunrise. That morning was full of fog, and when I arrived, I could barely see the seven-color mountain. I waited an hour for the fog to clear, but it didn't. On my way down, I passed this lovely alpaca couple wearing the Aymara culture colors—which made the wait worth it. 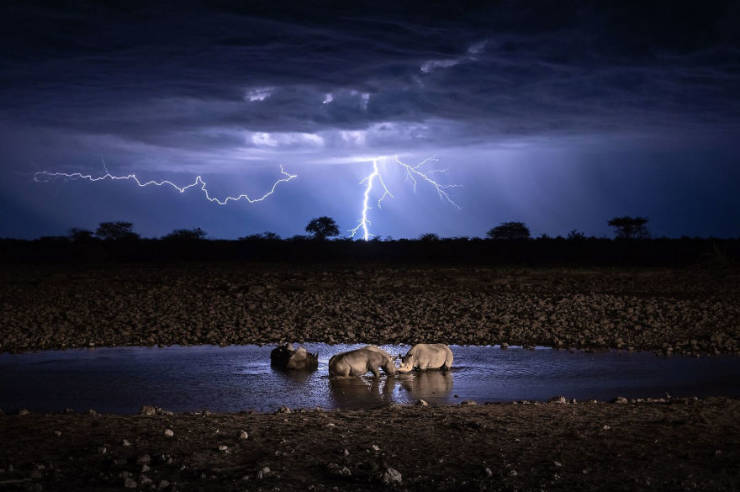 This was my very first trip visit to Africa. A group of rhinoceros drank water from a watering hole while lightning [thundered] at night. I captured over 10,000 photos to get this shot and show the relationship between nature and wildlife. Wildlife is a part of the environment and we should not treat them as a tool—we should protect them. 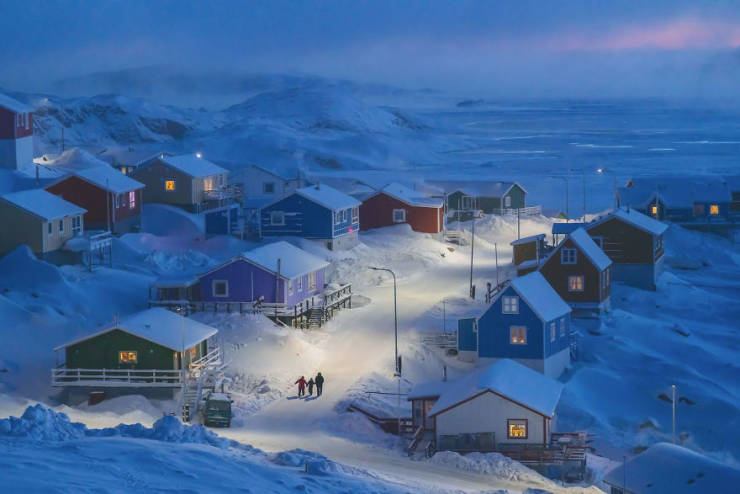 Upernavik is a fishing village on a tiny island in west Greenland. Historically, Greenlandic buildings were painted different colors to indicate different functions, from red storefronts to blue fishermen’s homes—a useful distinction when the landscape is blanketed in snow. This photo was taken during my three-month, personal photo project to present life in Greenland. 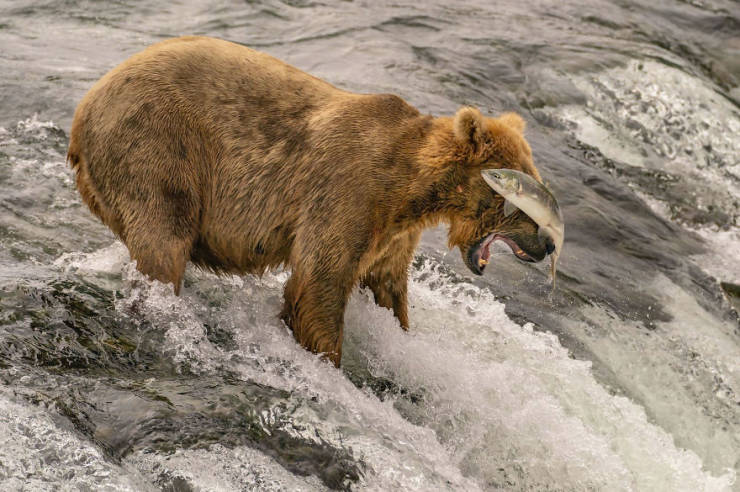 With everything, practice makes perfect. That couldn't be more evident than when fishing for salmon atop Brooks Falls in Alaska. This brown bear was attempting to snag one mid-air, but his timing was a bit early causing the salmon to land like a slap across his face. 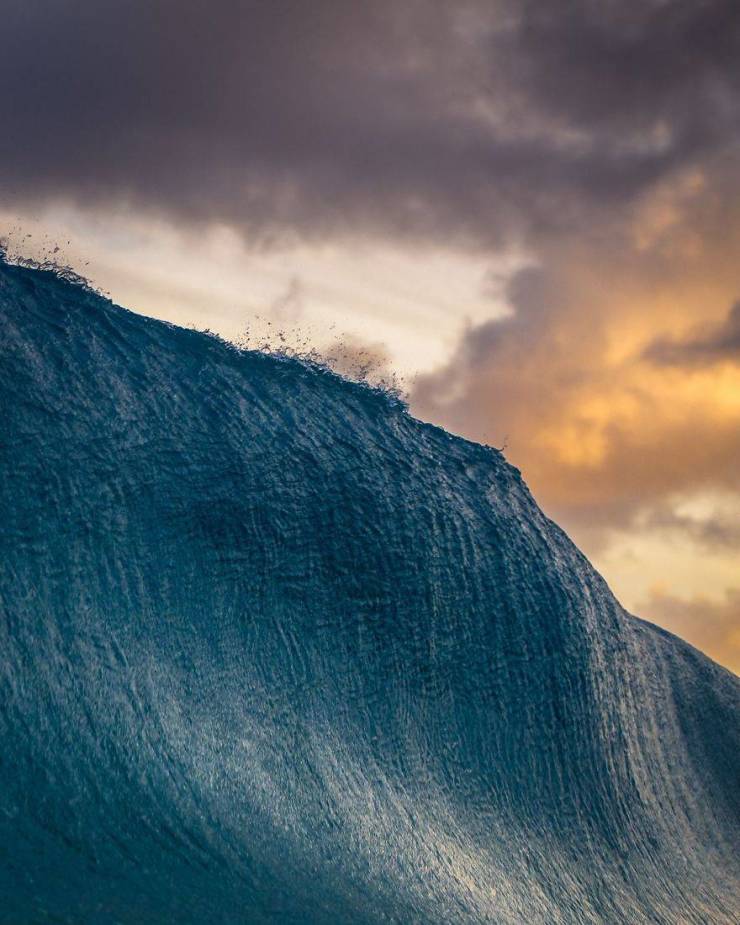 What happens before a wave breaks? That question has been my assignment this past year. On this particular day, I decided to shoot the sunset on the east side of Oahu, Hawaii. About 100 photographers were out in the morning, but I had the evening to myself. The textures from the trade winds [created] subtle colors from the west and blended well using my 100mm lens. I had to look into my viewfinder while this wave was breaking. Not an easy task when a wave is about to crush you.

People's Choice, People: 'How To Train Your Dragon' By Léo Kwok 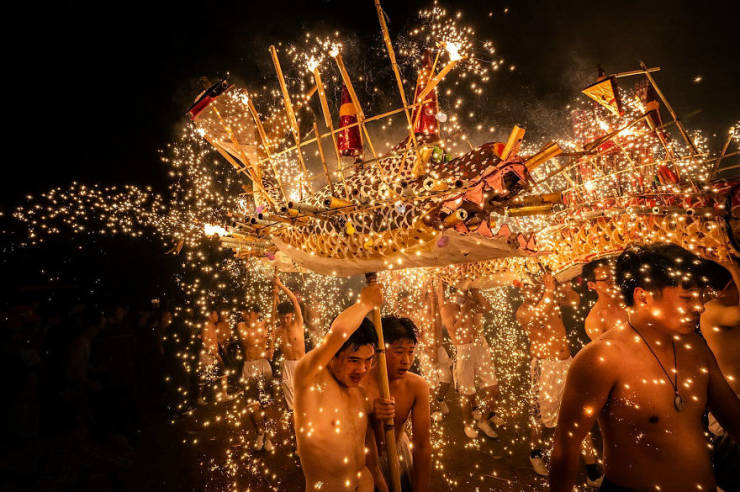 Showered by molten, firework-like sparks, people in Meizhou, China performs fire dragon dance to celebrate the Lantern Festival. This celebration has been performed since the Qing Dynasty and was listed as Intangible Cultural Heritage in China in 2008. [The festival] marks the first full moon night in the Chinese lunar year. 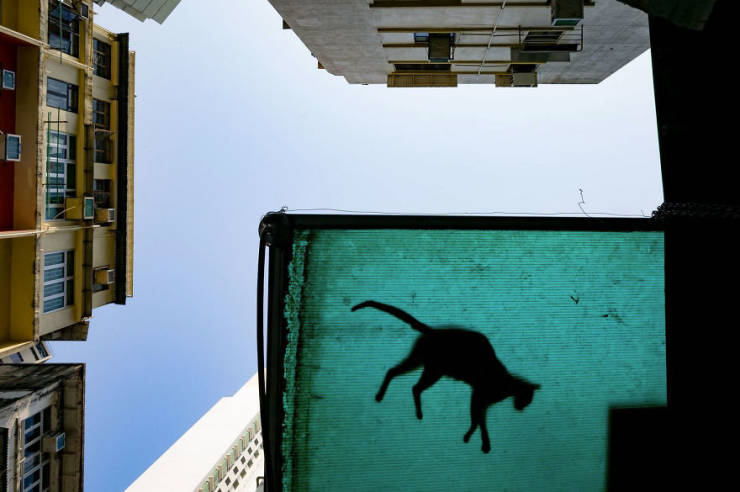 When are you traveling around the city, humans are not the only living species. When we look up at the sky, there are sometimes surprises. 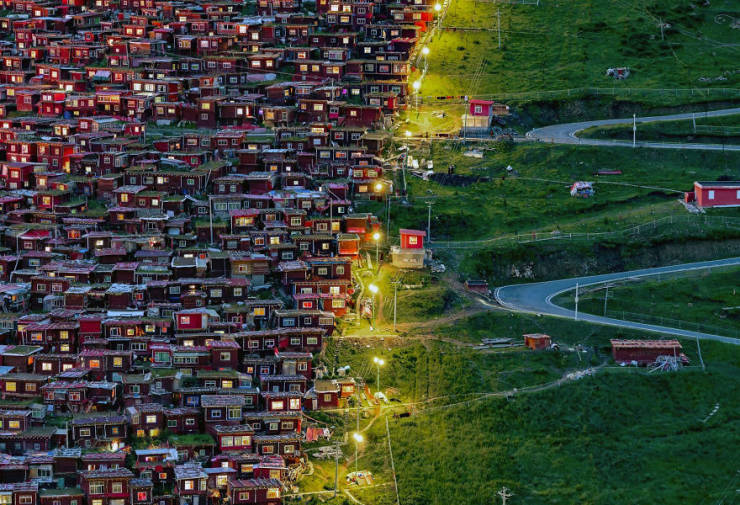 This photo was taken at Seda Larung Gar Buddhist Academy. It's around a 14-hour drive to get to Larung Gar [from the nearest city], and the journey is quite tough due to the mountainous roads. This view [shows] small red homes on the left side, while empty green roads [curve] on the other side. The monks follow the lights to [return] home. I was lucky to document [the area] and was deeply moved by [the monks] faith. I plan to [return] to Seda next summer [to make] more photos. 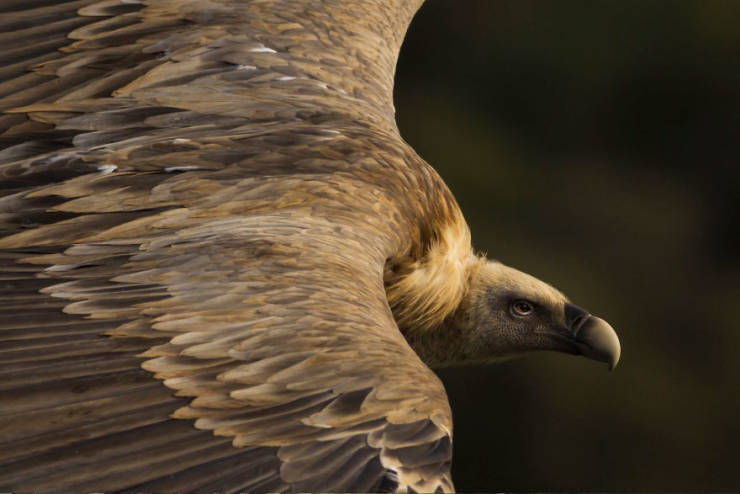 A gorgeous griffon vulture is seen soaring the skies in Monfragüe National Park in Spain. How can anyone say vultures bring bad omens when looking at such tenderness in this griffon vulture's eyes? Vultures are important members of the environment, as they take care of recycling dead matter. Vultures are noble and majestic animals—kings of the skies. When looking at them flying, we should feel humbled and admire them. 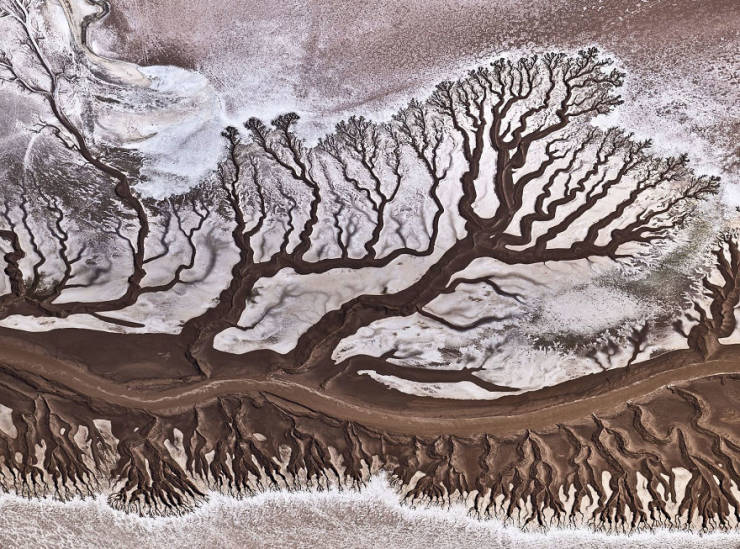 The Colorado River is very shallow due to the active withdrawal of water from it for agricultural purposes. When [the river] meets the ocean in Mexico, it is almost dry. This aerial photo was taken from a Cessna [airplane]. 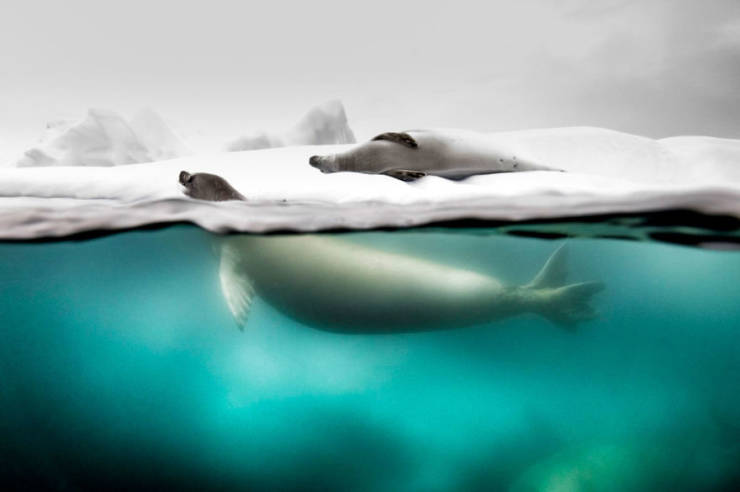 A crabeater seal is seen trying to get a spot on the same ice floe as his buddy. 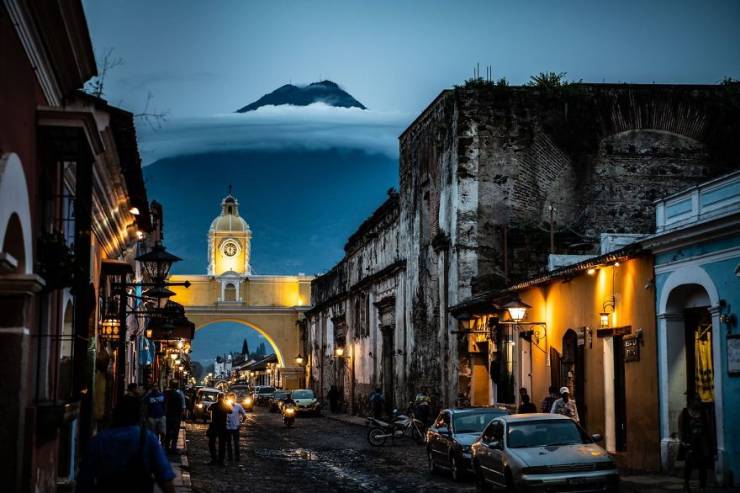 Walking around all day in Antigua, Guatemala, there was a persistent cloud layer that obscured the mountainous terrain surrounding the town. Late in the evening, while walking through Antigua just for a few moments, one of the volcanoes became clear and offered a spectacular view with the Santa Catalina Arch. The volcano complex known as La Horqueta, surrounds the town of Antigua in Guatemala with numerous volcanic peaks in the area including Fuego, Agua, Acatenango, and Pico Mayor. 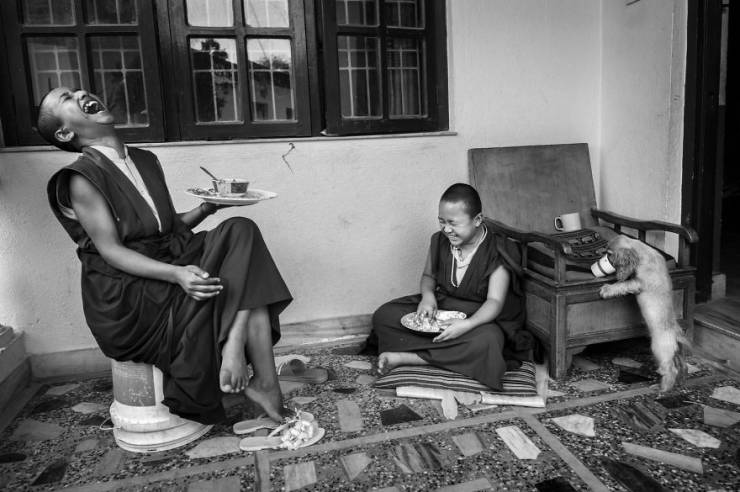 It was not an easy task to capture the little lamas—as the older monks call them. They spend their free-time hanging out with each other, checking their social media, or playing football. 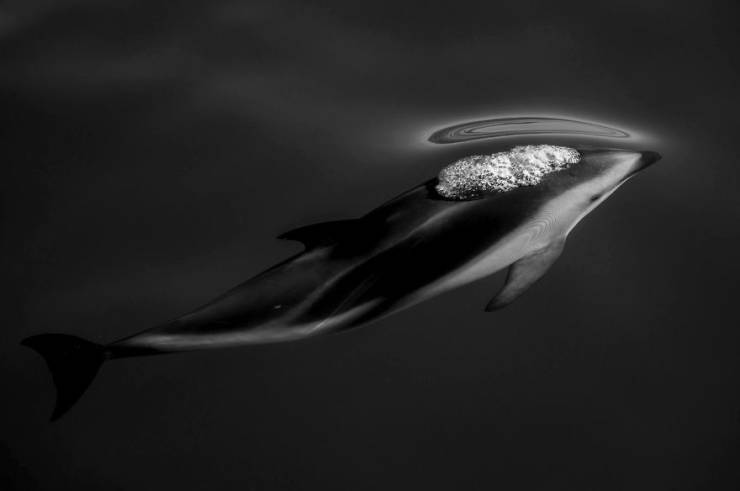 Dusky dolphins often travel together in great numbers in the deep canyons of the Kaikoura, New Zealand in search of food. They glide through the ocean effortlessly, coming up only to breathe. Dusky dolphins are fast and will often keep pace with a speeding boat. I waited on the bow of the boat as the Dusky dolphin almost broke [through the surface]. Their elegance and streamlined bodies are built for speed and maneuverability—accentuated by the smooth, clear water of the New Zealand coastline. 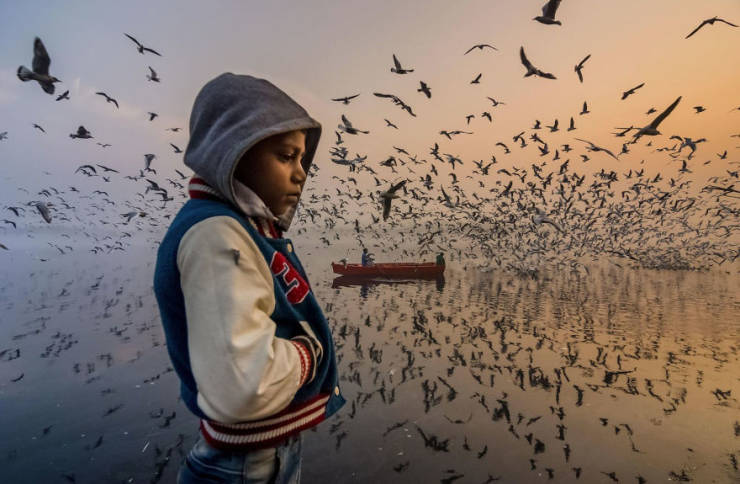 I captured this layered moment during sunrise along the banks of the Yamuna River in Delhi, India. This boy was thinking silently, and visitors were enjoying the loud musical chirping of thousands of seagulls. The early morning golden light from the east mixed with the western blue light, creating a [ethereal atmosphere]. I am a regular visitor [here] and have photographed this place for the past three years. Now, many national and international photographers have begun visiting [too].

Honorable Mention, Nature: 'King Of The Alps' By Jonas Schäfer 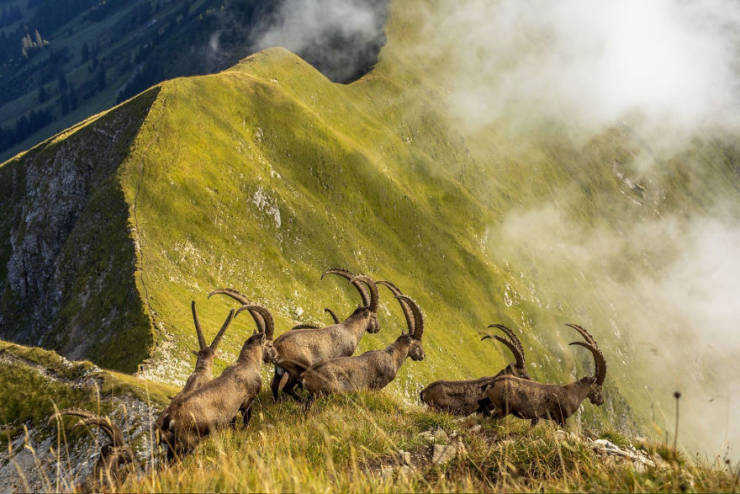 A herd of ibexes in Switzerland’s Bernese Oberland cross a ridge above Lake Brienz. Their powerful and impressive horns show who the king of the Alps are. Ibexes are ideally adapted to live at dizzying heights. The continuing ridge path and the rising fog show the natural habitat of these animals. After a few hours of observing the animals, I spotted the ibex herd on one side of the ridge. Several ibexes stopped at the transition [to view the world around them]. 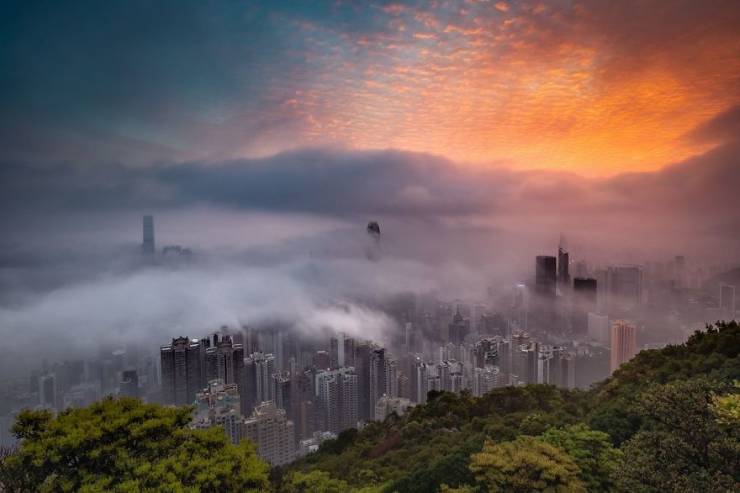 The morning’s sunrise glow decorated the city in fog. Hong Kong is a coastal region and it has always been covered by fog during the spring. Fortunately, landscape photographers meet this wonderful scenery. However, this scene may be disappearing forever because of the global warming, Winter will disappear, and no more cold air will meet the warm air during the springtime. So, this is a very precious capture. Actors prepare for an evening opera performance in Licheng County, China. I spent the whole day with these actors from makeup to [stage]. I’m a freelance photographer, and the series “Cave Life" is a long-term project of mine. In China's Loess Plateau, local residents dig holes in the loess layer [to create cave living spaces, known as yaodongs] and use the heat preservation properties to survive cold winters. 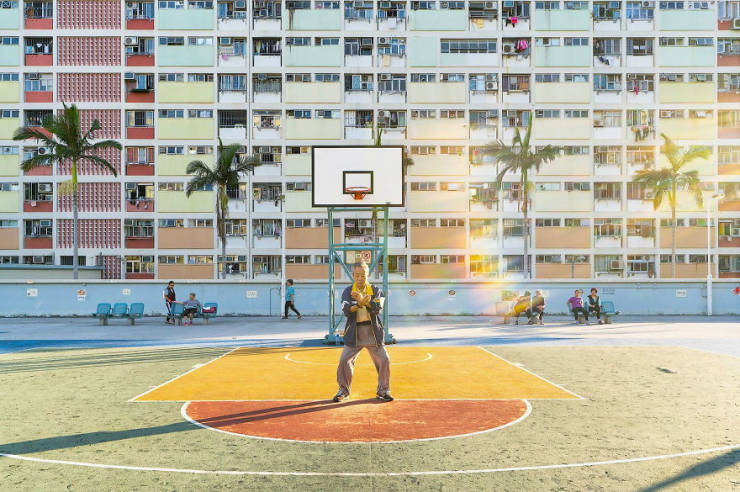 This photo was taken at a public park at Choi Hung House in Hong Kong. When I visited during the afternoon, it was very crowded with many young people taking pictures and playing basketball. But when I visited at sunrise, it was quiet and a different place. [The area] is [designated] for neighborhood residents in the early morning, and there was a sacred atmosphere. I felt divinity when I saw an old man doing tai chi in the sun.

Second Place, Cities: 'In The Age Of Aviation' By Jassen Todorov 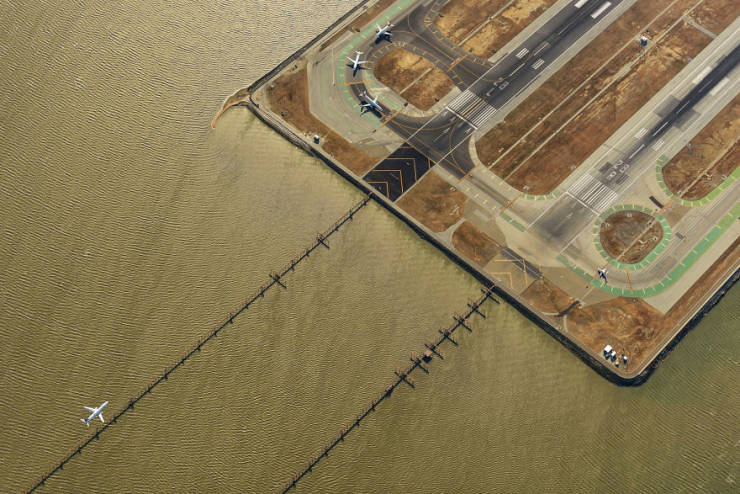 There are four runways at San Francisco's International Airport (SFO). This is a rare look at the approach end of runways 28 left and right. I had dreams of documenting the motion at SFO and [arranged] permission to fly directly overhead. What a windy day it was. Winds at SFO were 35-45 miles per hour, which meant a bumpy flight, and it was much harder to control the plane while photographing. The flight was challenging, but it was also so thrilling that I couldn't sleep for several days. 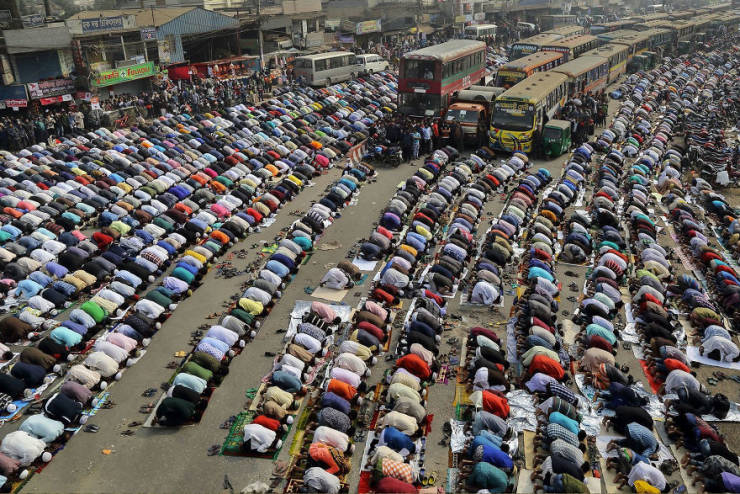 People pray on the street in Dhaka, Bangladesh during Ijtema. Bishwa Ijtema is one of the major Islamic religious gatherings which is [observed] annually in Dhaka and millions of Muslims visit [during this time]. Dedicated prayer grounds are not [large] enough to handle this huge number of people, so large numbers of people come to [Tongi], the main street of Dhaka. All the ground transportation and [pedestrian crossings] are suspended during that time.

People's Choice, People: 'On The Streets Of Bulgaria' By Kristyn Taylor 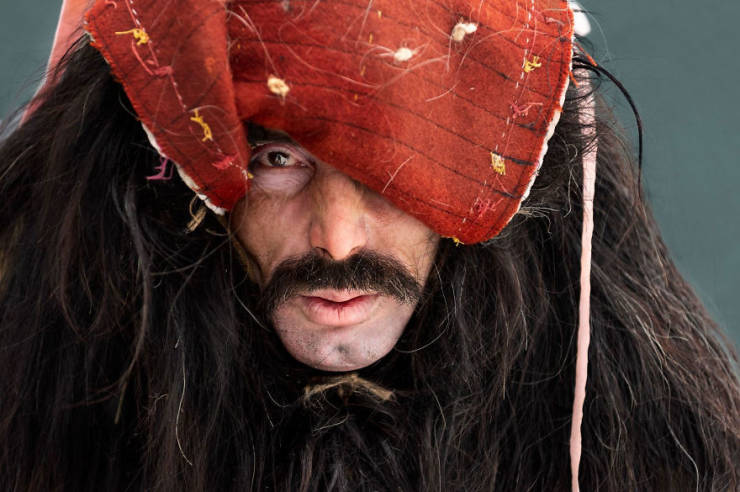 Dressed in his long-haired goat costume, a man is ready to walk the streets of Pernik, Bulgaria. The Bulgarian Surva Festival is an annual gathering of villagers masquerading as Kukeri. The ceremony is a pagan festival intended to ward-off evil spirits and welcome renewal in the New Year. 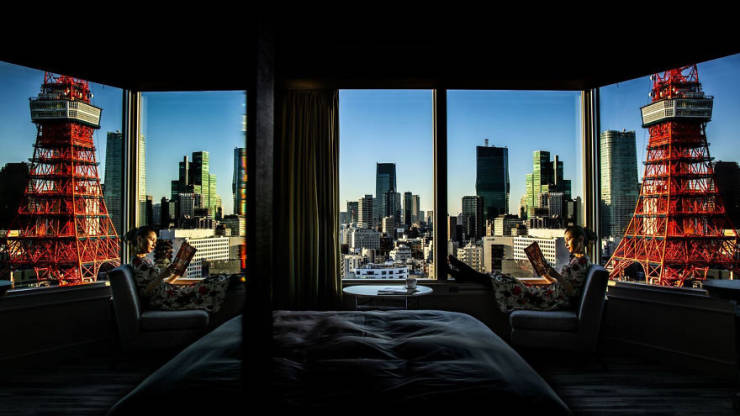 This room in the Tokyo Tower looks dynamic. In the busy city, the natural light entering this room gave us time to relax. My wife was reading a magazine, while enjoying the scenery and slow time. 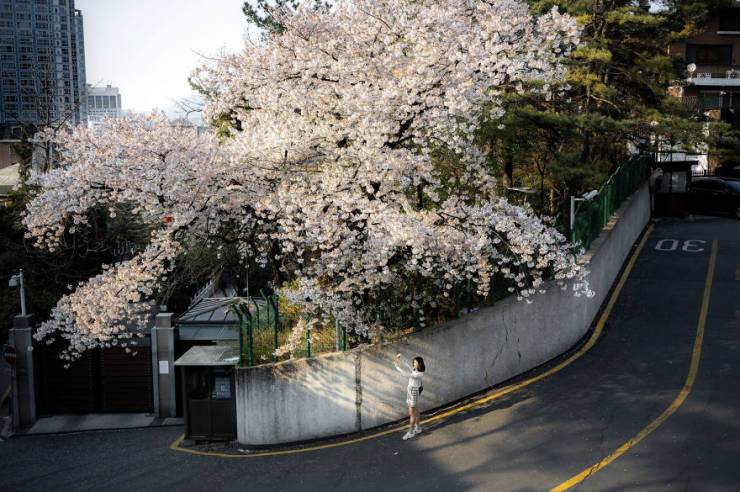 Having wandered around Seoul during my spring trip, I saw a cherry blossom tree blooming near the street corner. There is only a [single] light beam for the tree to grow in the concrete jungle. It seems that the human invasion has made [the trees] struggle and force them to find a way to live with us. 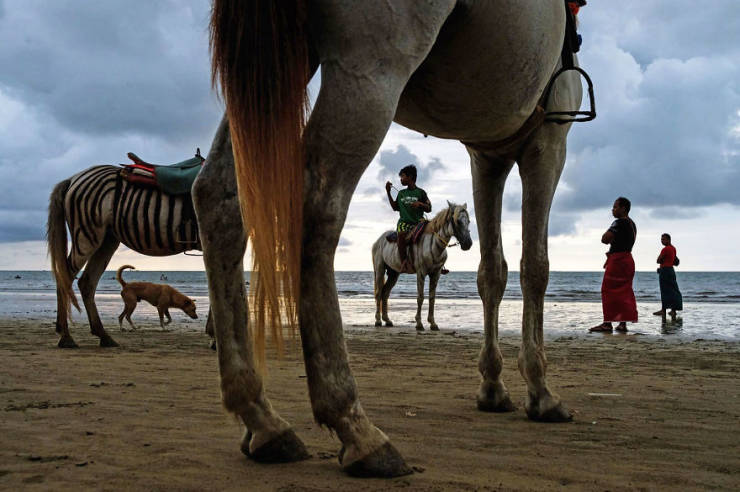 A quiet evening on the beach in Chaung Thar, one of Myanmar’s most popular beach towns. 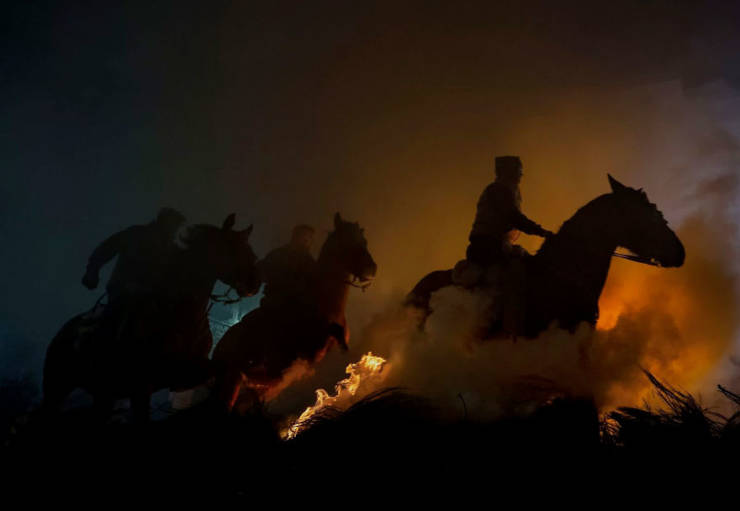 Every year on the feast of Saint Anthony the ceremony of the purification of animals, called Las Luminarias, is celebrated in Spain. In the province of Avila, horses and horsemen jump over bonfires in the ritual that has been maintained since the 18th century. The animals [are not hurt], and it is a ritual that is repeated every year. To make the photo, I moved from Seville to San Bartolomé de Pinares because I am very interested in photographing ancestral rites.

Gun 3 year s ago
#17 maybe the earth will rotate again and north will become south again. Global warming? Why do you believe politicians and actors but not scientists?
Reply
2

Skier 3 year s ago
#21: Sorry but I can't take seriously a religion that asks my [email protected]@, up in the air
Reply
-3

Check 3 year s ago
Gun, that was the most stupid comment around I've read today and there's been some pretty bad already.
Reply
Powered by