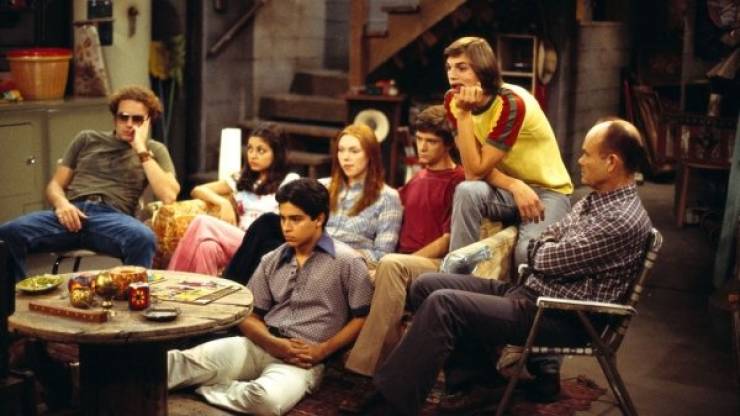 The show was originally going to be called Teenage Wasteland after The Who song.

Topher Grace was scouted for the role by co-creators Bonnie and Terry Turner during a high school play. 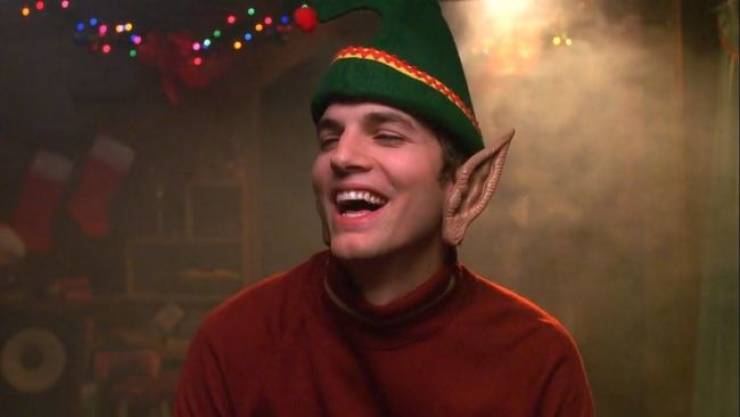 Fox’s censors wouldn’t allow the series to explicitly show substance abuse, so ‘the pot circle’ was the show’s workaround.

Laura Prepon (Donna), Danny Masterson (Hyde), and Ashton Kutcher (Kelso) all held lit cigarettes under the table during the ‘pot circle’ scenes to smoke in between takes. 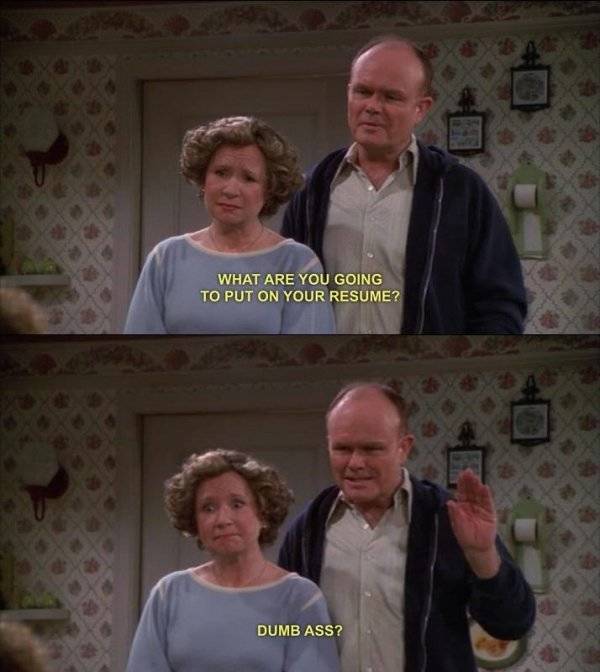 Jackie is the only member of the gang to call everyone by their first names. This was done to show that she’s not as laid back as the other characters. 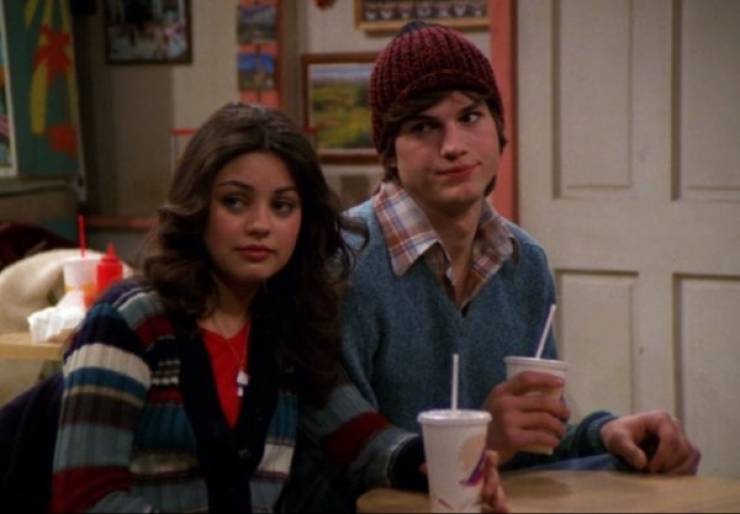 Mila Kunis had her first ever kiss with cast mate Ashton Kutcher on set. They’re now married with two children. 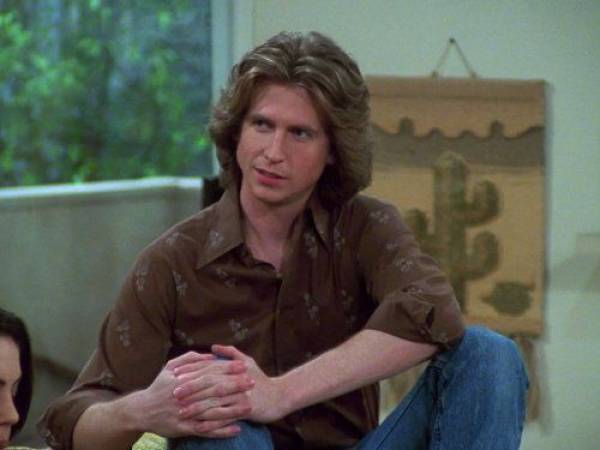 Josh Meyers, who plays Randy in later seasons, was originally going to replace Topher Grace as Eric. The writers were going to explain his change in appearance as Eric ‘becoming a man’ during his time in Africa, but the idea was thrown out and the character of Randy was created.

Kurtwood Smith was the only regular cast member who was actually born in Wisconsin. 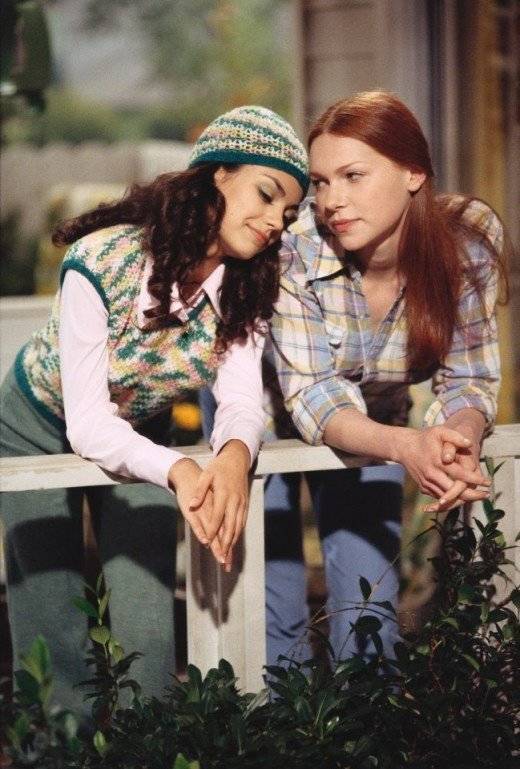 Because Mila Kunis stands at a petite 5’4” and Laura Prepon is 5’10”, Kunis had to wear platform heels when filming scenes together. 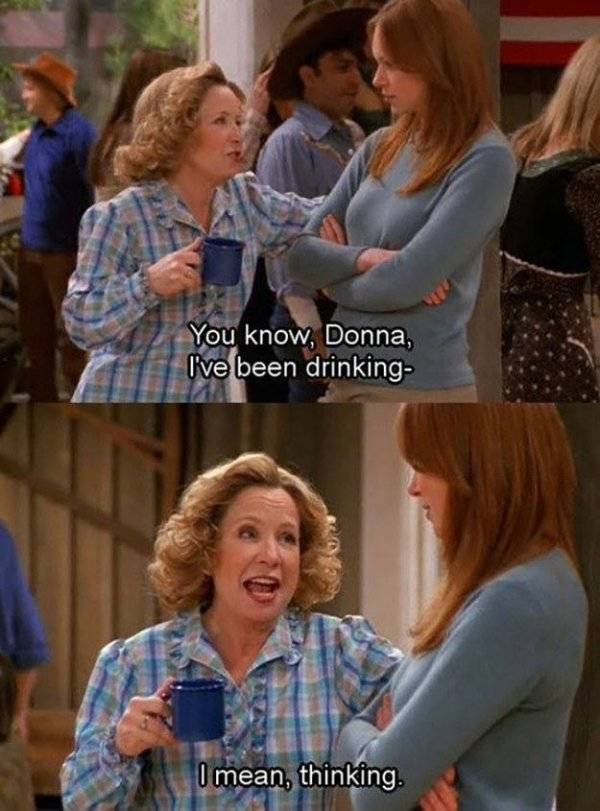 The smoke in the ‘pot circle’ scenes was strawberry scented. 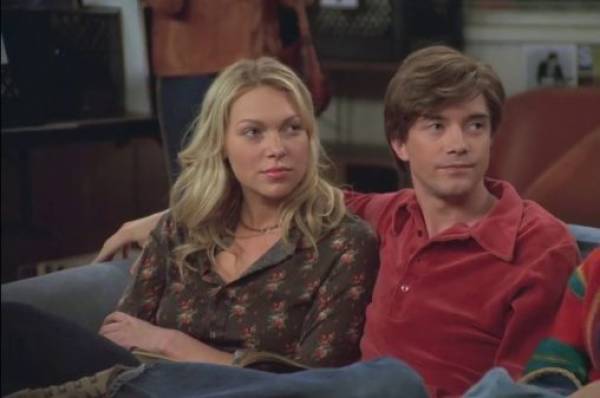 Donna dying her hair blonde was written into the show because Laura Prepon had to go platinum for her role in the movie Karla.

Lisa Robin Kelly was replaced as Laurie in season six due to a battle with alcoholism. Sadly, she passed away in 2014 from an overdose. 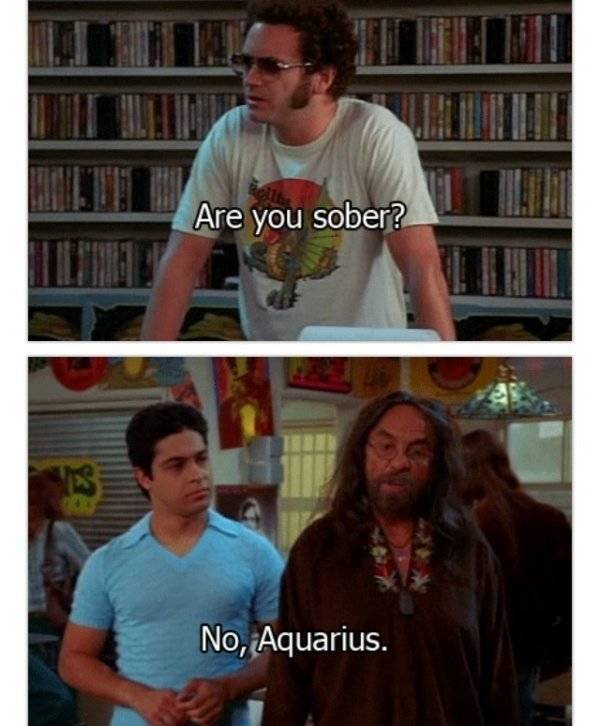 The character of Leo was created with Tommy Chong in mind.

To get the part of Jackie, Mila Kunis lied about her age and said she was turning 18, when really she was 14 at the time.

Alex Chilton, who cowrote the theme song, was paid $70 in royalties every time the show aired. 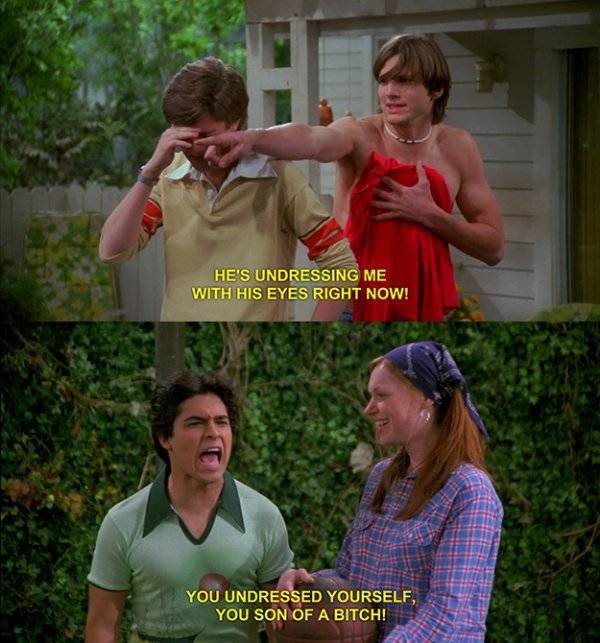 There was a U.K. remake called Days Like These in 1999. Scripts from the original show were used, but American references were swapped out with British ones. 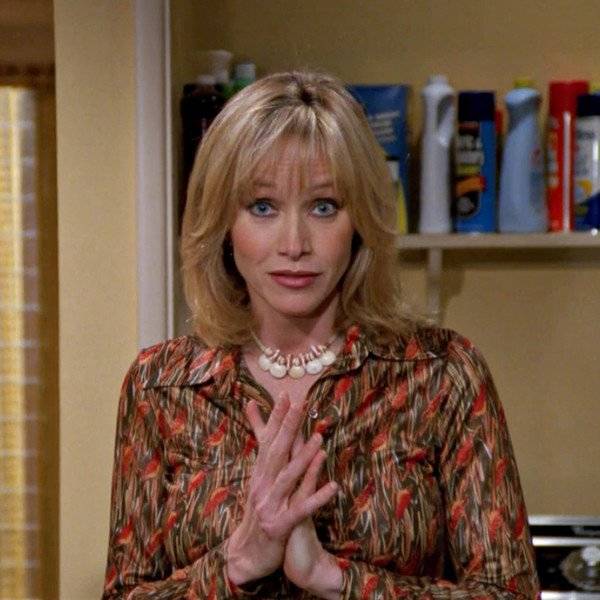 Tanya Roberts, the actress who plays Midge, left the show when her husband fell terminally ill. She returned for a handful of episodes in season 7, but her husband sadly died the next year.

Before the show, Ashton Kutcher was a model with no prior acting experience. During the first season of filming he was often worried he’d get fired due to his lack of skills. 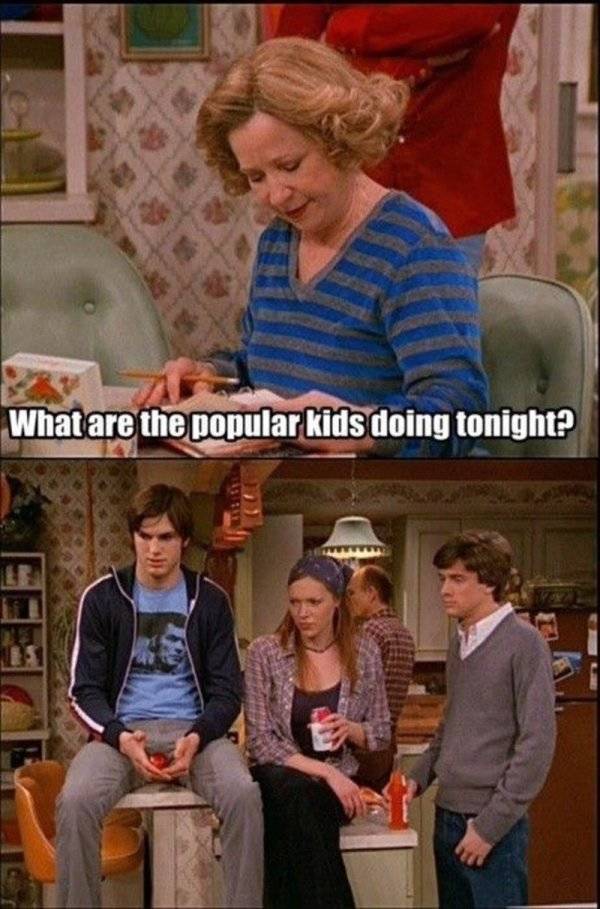 Topher Grace reportedly distanced himself from cast members, and has not stayed friends with the other actors after he left the show.

Joseph Gordon-Levitt only appeared in one episode as Eric’s friend, Buddy Morgan, because people didn’t react well to the gay character. Eric and Buddy’s kiss was the first onscreen kiss between two men on North American prime time TV. 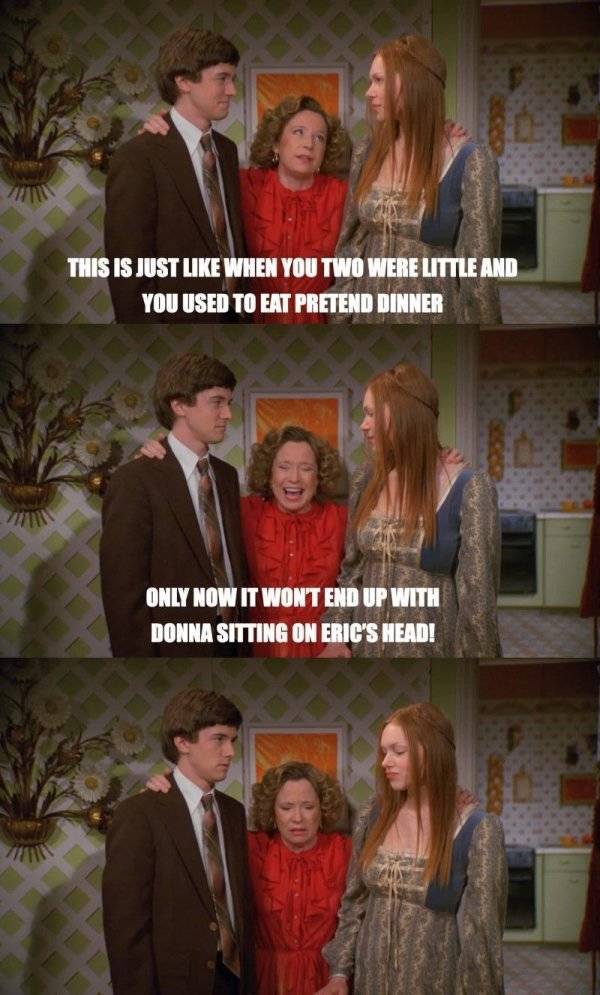 Laura Prepon has said that Topher Grace is a bad kisser. 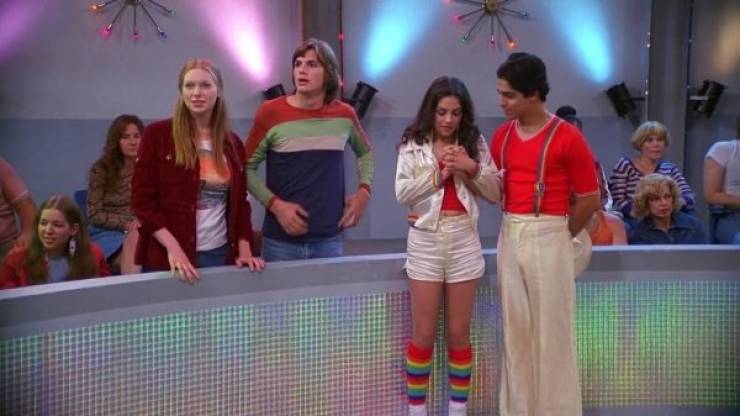 The creators of the show believed people would refer to the series as ‘that ’70s show’ no matter what it was called, and thus the name was born.

Bob really wanted me to end this with a Mila Kunis GIF. I can’t imagine why…