Built in 1981, this complex of igloos on stilts was built by an old tycoon as a self-sufficient, eco-friendly relaxation spot for his family.

Sadly, erosion and constant storms meant that eventually the beach was washed away and the houses were left in the water. Now, the only thing that lives there are wildlife and ghostly legends. 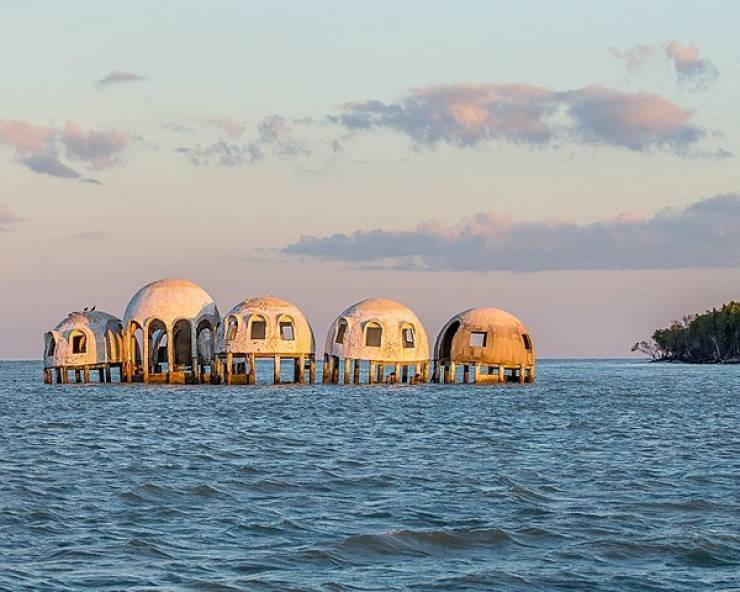 This Faire was only open from 1996 to 1999, and was an honest attempt at making a replica of a medieval European town, with buildings, towers and even a replica sailing ship in a small pond.

Except, the land was too swampy, the climate too hot and the journey too far from civilization to make it sustainable. So the Faire was shut down and the site was abandoned to nature. 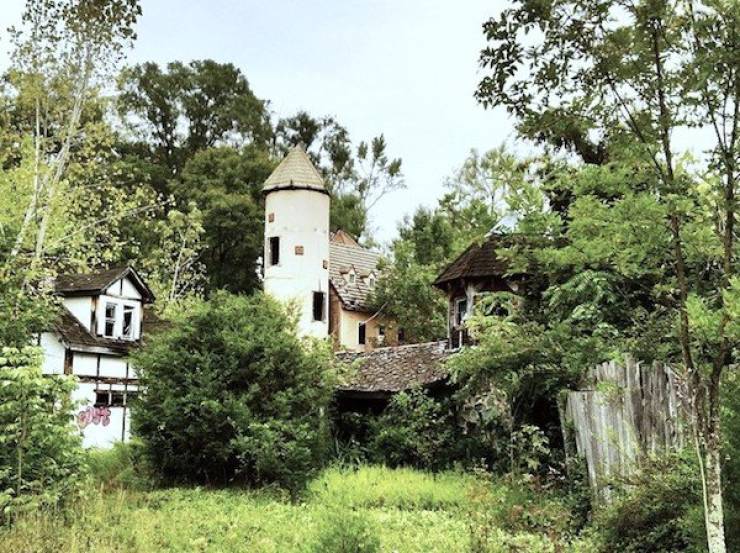 Founded in 1904, this ghost town was dead by 1916, much like other ghost towns in the States during the Gold Rush era. At its peak, it had a stock exchange, board of trade, hotels, schools, stores, an ice plant, electric plants and a train station.

Then, the boom faltered and by 1907, there was a financial crisis in the US and mines began to close. By 1911, the mine closed here and the town was abandoned 5 years later. The Village of Craco

This hilltop town was founded in the 8th century and survived the black plague, roving marauders and a whole lot else, but was finally abandoned due to a landslide in 1991.

The town has a huge castle along one side, as well as a massive church; all desolate and empty except for a religious festival that happens up there once a year. 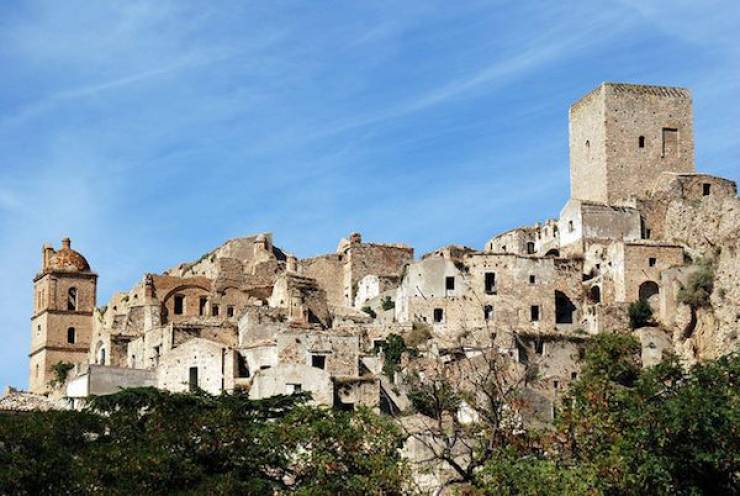 This alien-spacecraft-looking building is a monument, erected by the government of Bulgaria, to commemorate a battle between the Bulgarians and Turks in 1868. Built in 1974, it’s an example of the brutalist Soviet architecture that defined the cold war, and was filled with statues of Lenin, Marx and giant red stars.

After the government fell in 1989 and the cold war was effectively ended, the monument was abandoned 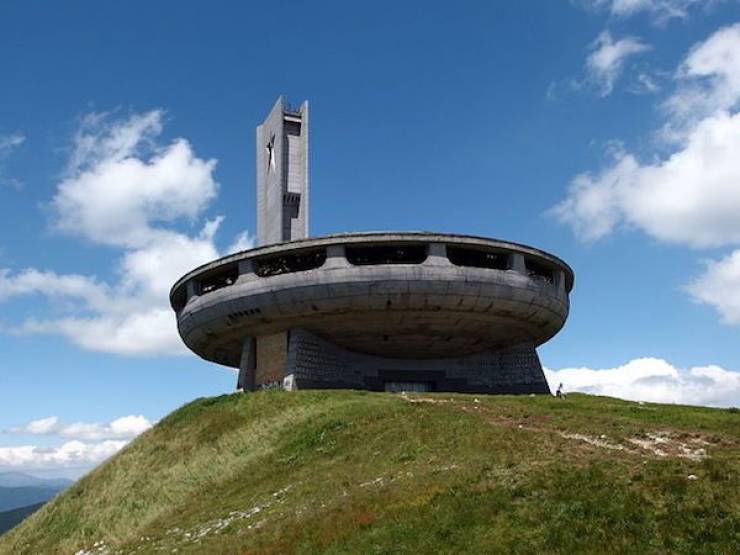 These decaying structures are a reminder of the darkest days of WWII. As a part of the Thames Estuary defines network, these anti-aircraft tower-forts were built in 1942, with each fort consisting of seven buildings on stilts, surrounding a command tower. When operational, catwalks connected the buildings.

After the war, the towers were decommissioned in the 50’s, and have served as pirate radio stations and secret hideouts for sovereign citizens. 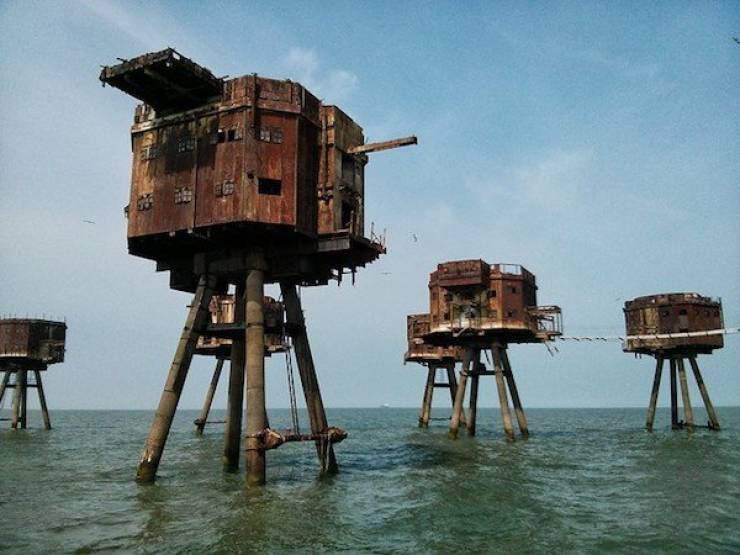 This was a settlement founded by Hawaiian Mormons in 1889, in the middle of the desolate Skull Valley. Originally, converts from Hawaii moved to Utah to join the Salt Lake Temple in Salt Lake city, but found themselves discriminated against, so they started their own outpost in the desert.

They built a town, planted trees, built a reservoir and made a go at it until 1917, when crops began to fail, and the people succumbed to disease. When a temple was built in Hawaii, they moved back home, leaving the town abandoned for the last century. 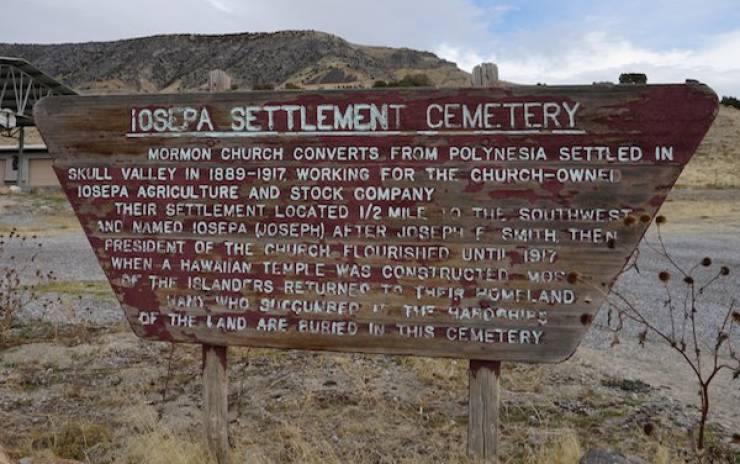 This scrapyard is only 12 miles away from Doha, but it could be lightyears. Far away from all the lights, people and city skyline, is an apocalyptic wasteland, filled with Mad Max-esque cars. At any given time, there are over 20,000 cars, trucks, buses, construction vehicles, and boats. They can be in old and used condition, or practically new.

Unlike the rest of the places on this list, this isn’t abandoned and decrepit, but it is desolate and lonely. 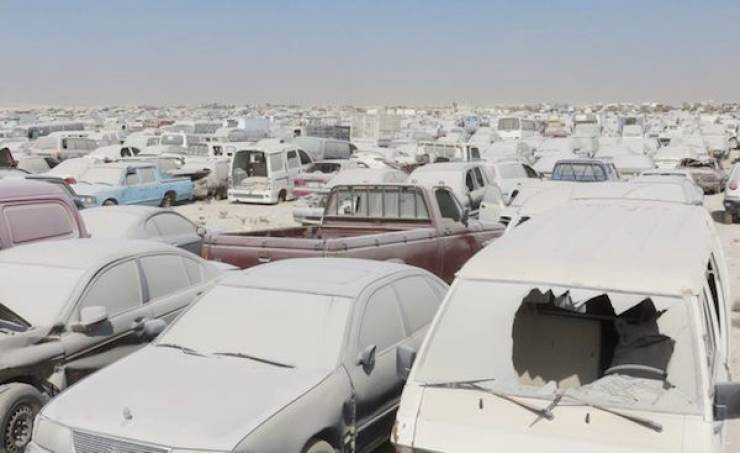 In the 20’s, this town and it’s salt lake were a popular tourist retreat for vacationers from Buenos Aires. The town would swell up to over 5,000 additional people every vacation season, taking in the therapeutic waters of the lake, as well as the spa at the hotel.

But in 1985, a freak weather pattern caused the lake to swell and break a dam, flooding the village and submerging it under 30ft of briny water that tore down the houses, stripped the trees and left the soil salted.

It took until 2009 for the dry weather to cause the water to recede, leaving a ghost town behind. 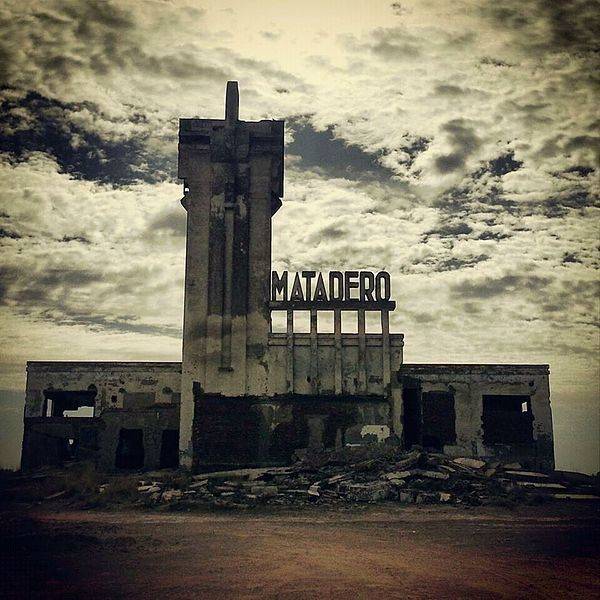 Built in 1991, this waterpark was incredibly popular and built in a protected Sand Dune ecosystem. It saw record attendance until 2000 or so, when financial troubles and maintenance issues (including shifting sands), caused the park to be abandoned. 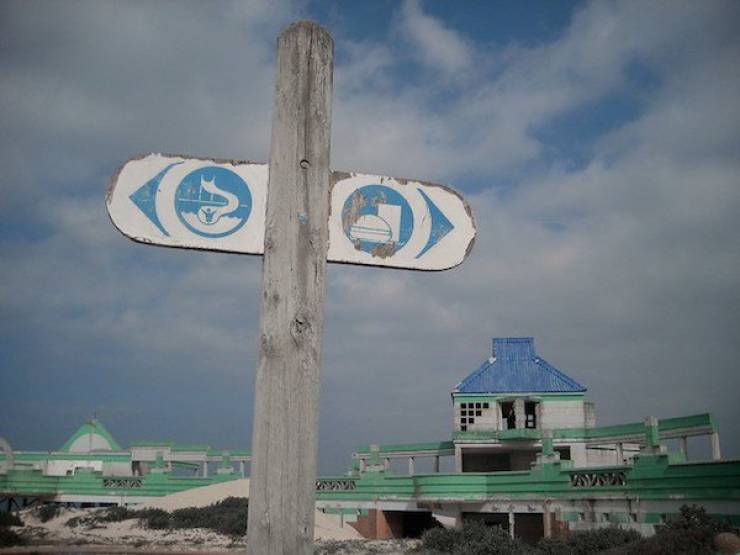 Far out in the Caribbean Sea, away from the tourist beaches, is a secret island that’s been untouched for hundreds of years. Called La Isla Grande, it’s home to 800 people who are cast off from technology and the outside world, and survive by fishing and farming. It’s here that Escobar built his palace.

At his peak, he ran the Medellin drug cartel and was the source of 80% of the world’s cocaine, and he held insane parties in this small town that resembled South Beach in the 80’s. After his capture, the palace was taken over by the government, and left to nature. 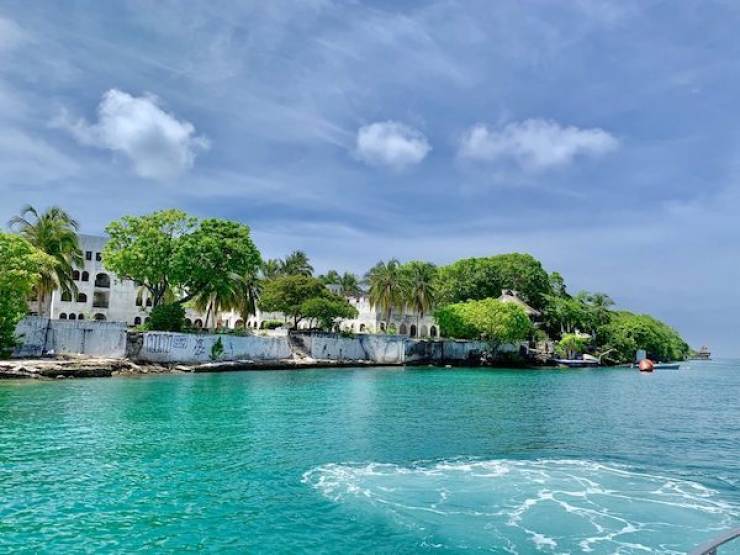 This massive luxury resort was built in the 1990’s, but never got to see one guest; seemingly abandoned on the eve of it’s opening. Officially known as the PI Bedugul Taman Rekreasi Hotel and Resort, it’s rumoured that the developer was cursed, and his entire staff disappeared from the site the night before the grand opening. 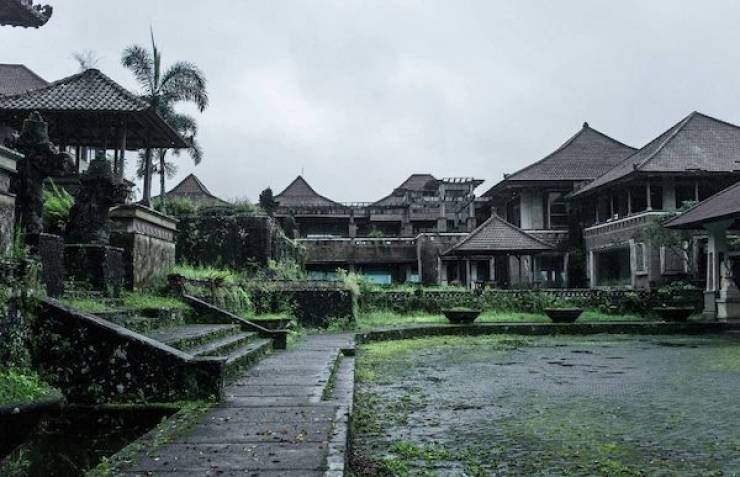 This cargo freighter to floating forest is a gorgeous sight to behold. Sitting in Homebush Bay, this former trading port has 4 abandoned ships rusting in its waters, and left were they floated.

Only one of them is the home to mangrove trees that spill over the sides of the ship, causing it to sway with the tides, but never sink. 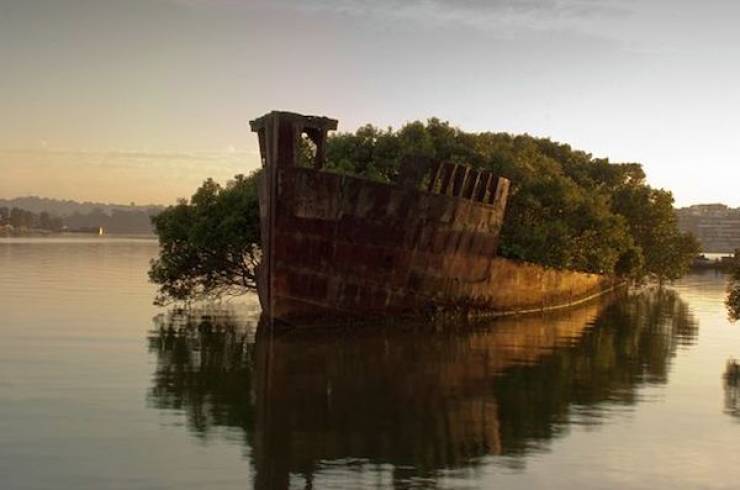 This mining town was established by the Canadian Pacific Railroad, in the mountains of Banff National Park. Built in 1903, the town supplied coal to CPR locomotives and to the Banff Springs Hotel, and was removing close to 200,000 tons of coal per year.

It was, however, a tough job and labour relations between the miners and the railroad soured and after a series of strikes, CPR just closed the mine, and since Bankhead was a company town, the economy dried up with the closure. Since 1922, it’s been abandoned to nature and hikers. 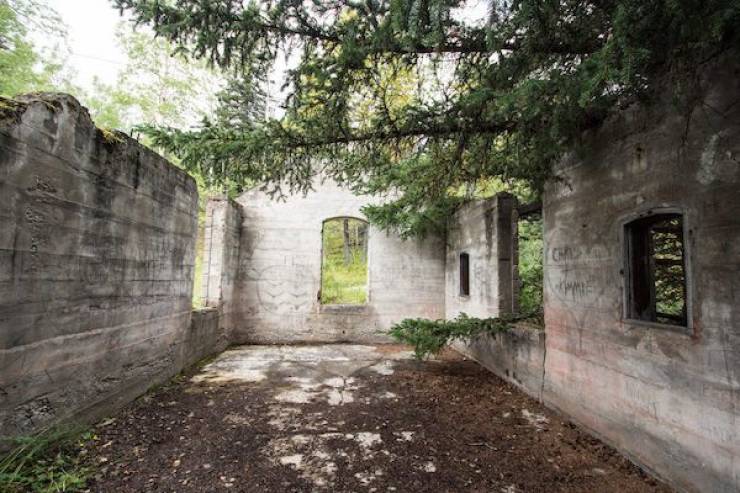