During the opening credits, the Nite Owl rescues Thomas and Martha Wayne from a mugger outside the Gotham Opera House, so in this universe Bruce Wayne never becomes Batman. 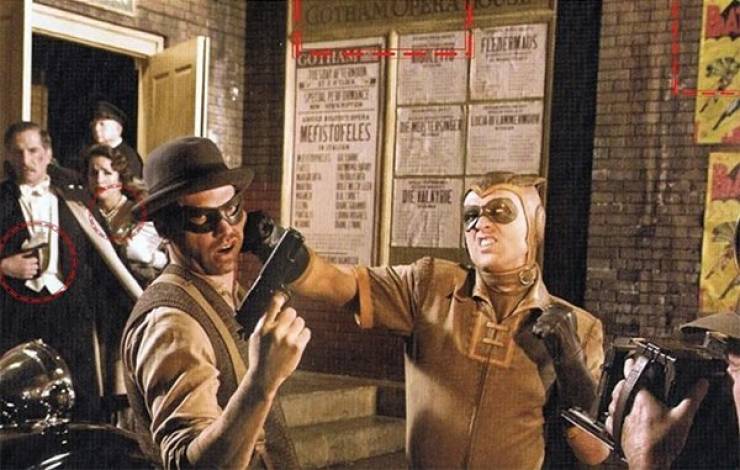 Tim gets tricked into thinking someone’s home by a scene from the movie Angels With Filthy Souls, which is actually the fake movie created for Home Alone. Kevin McCallister uses the same scene to trick the “Wet Bandits”.

If you really pay attention, you’ll notice Tom Cruise hit his knee on the road during this motorcycle chase scene.

The batteries in Buzz Lightyear are made by ‘Buy N Large’, the same company that created Wall-E. 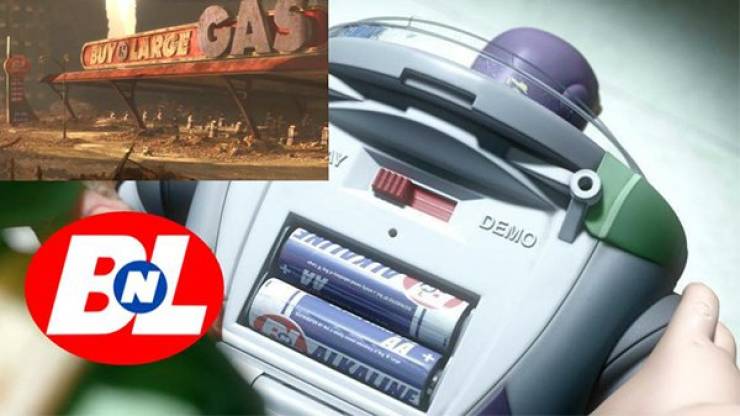 In the opening scene when Col. Landa enters the farmers home, his three daughters are lined up to greet him. He walks right past the first two, who have dark hair and eyes, and only greets the one with blond hair and blue eyes, Aryan features. 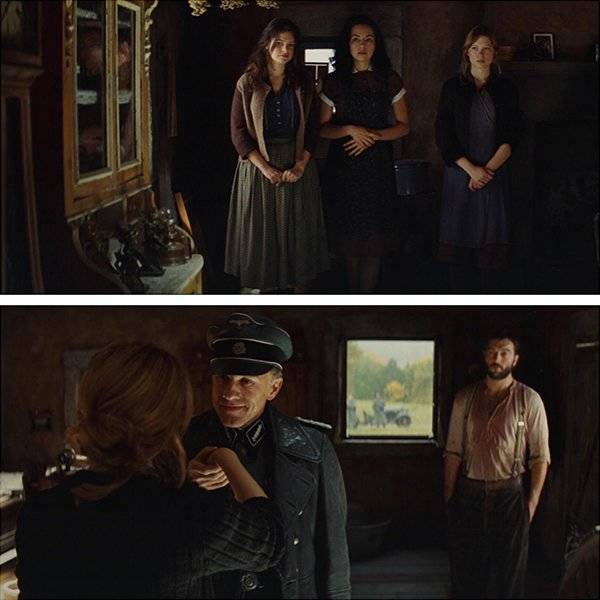 Bruce Campbell has a cameo as a snooty usher and says, “… it helps maintain the illusion.” Why does this matter? Well, he was supposed to play the Mysterio, the master of illusions, in the unreleased Spider-Man 4. 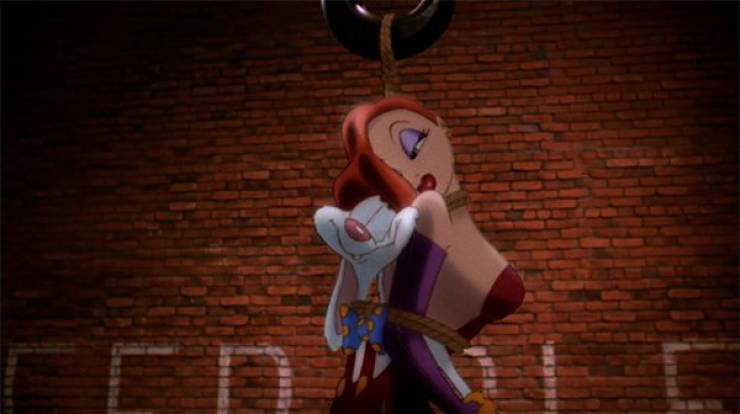 Anchorman: The Legend of Ron Burgundy (2004)

Brian Fantana has a 2×2 Rubik’s cube on his desk, a subtle implication of his intellect level. 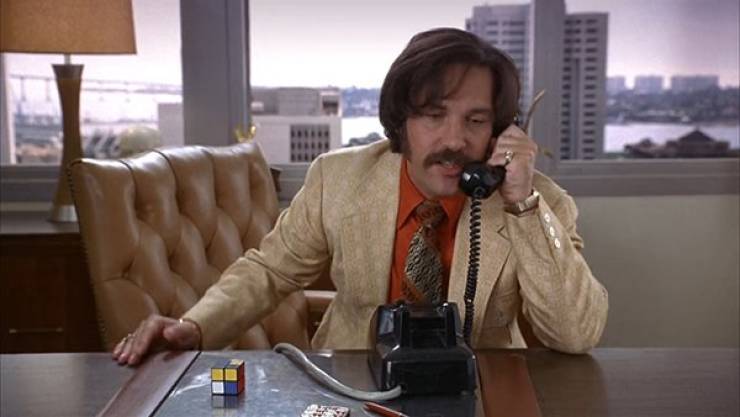 The Gauntlet that Hella says is a fake is right-handed, which makes sense because Thanos wears his Gauntlet on his left hand.

Chef Linguine has Incredibles underwear on.

Tim Burton’s got a creative eye when it comes to visual foreshadowing. 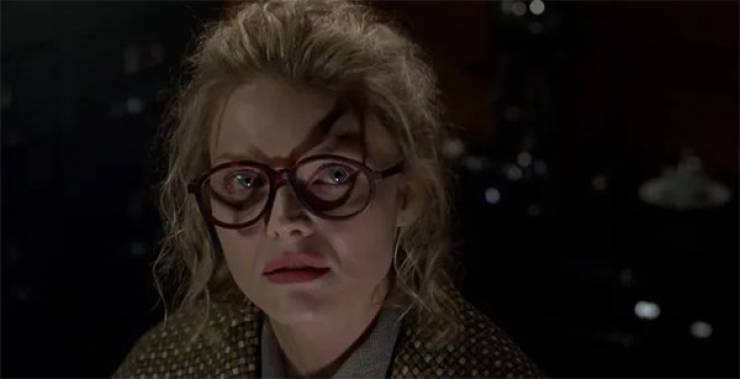 When Dante says, “You ever notice that all the prices end in 9?”, none of the prices in the background end in 9. 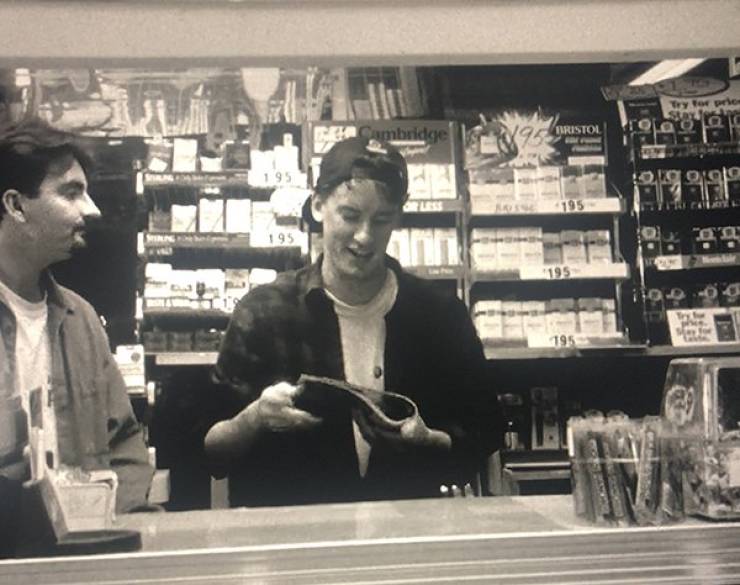 On the poster for the film, there’s a hidden image of a screaming face on the knife-wielding hand. 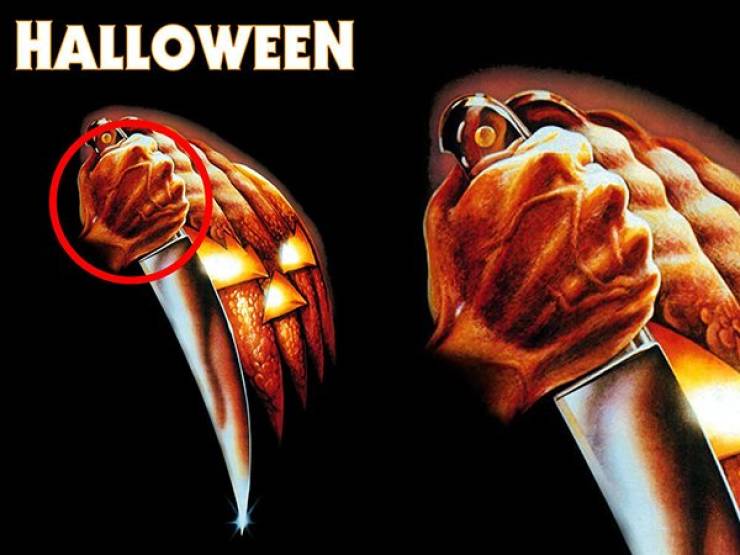 Zazu makes a comment that Scar “would make a very handsome throw rug.” A few years later, he does in Hercules.

The Vulture, played by Michael Keaton, is briefly seen in silhouette over the moon. This was a homage to another one of his superhero films, Batman. 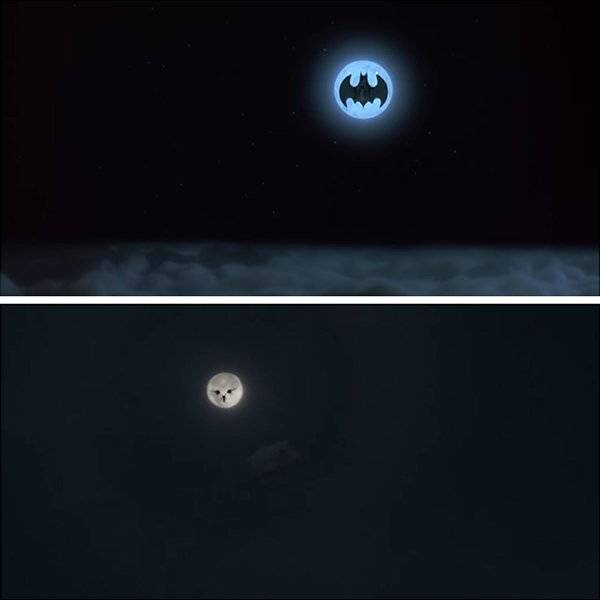 Whenever Jordan Belfort is high on ludes, director Martin Scorsese purposely shot the scenes with continuity errors to signify his deteriorated memory.

In the opening scene, you can see Vincent Vega walking to the bathroom before Honey Bunny and Pumpkin rob the diner.

An Apple car can be seen in the race at the beginning of the movie. This was a tribute to the former CEO of Pixar, Steve Jobs. The car’s number, 84, is also significant because the first Apple computers hit shelves in 1984. 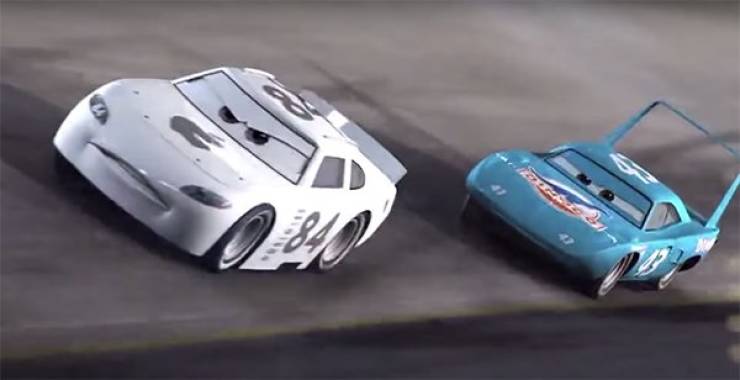 Robert Patrick trained to fire a gun without blinking.

Hold your horses… is that Seth Rogen? 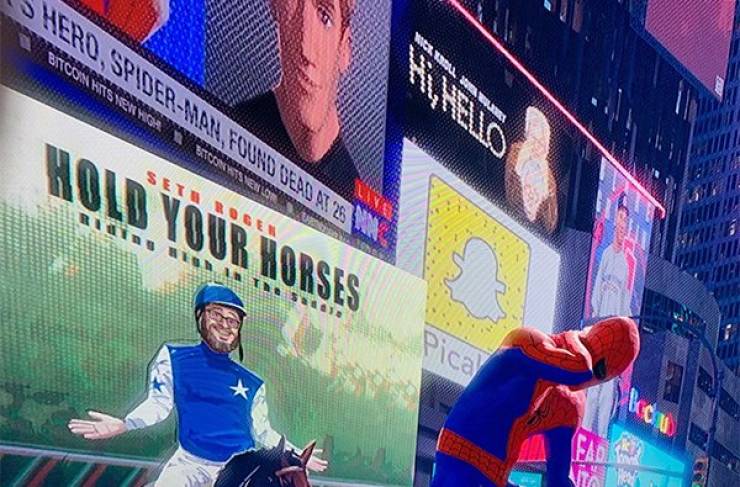 At the end of the movie, when Tugg is walking up to the stage to accept his Oscar, you can see Cody (Danny McBride) already holding his own Oscar, presumably for Best Visual Effects for the film within a film. 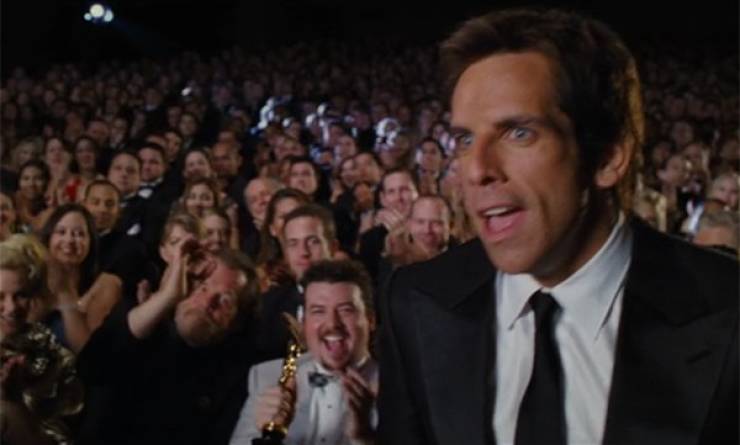 The logo is a maze, and the prize is an egg. 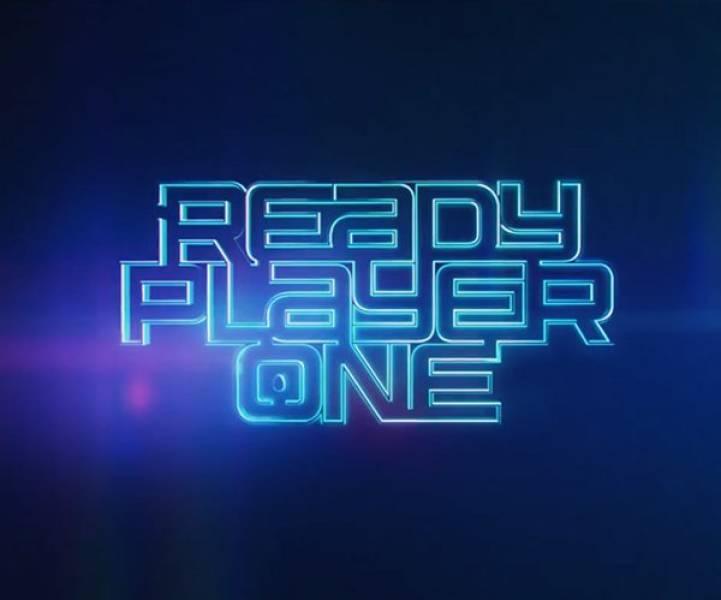 Uma Thurman’s character’s name is never revealed in the film, but if you look closely, you’ll see it printed on her boarding pass when she goes to Okinawa.

Elastigirl’s new super-suit, which was designed by Devtech, is the only one that gets damaged, showing how superior Edna Mode’s designing ability is.

Just take a look at the fruit on Einhorn’s desk. 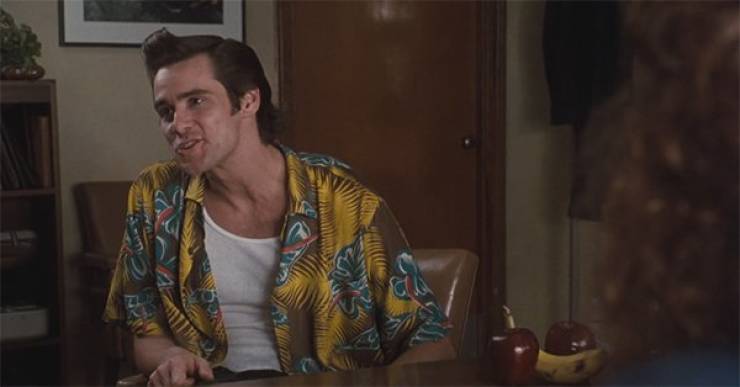 The writers poked some fun at Dwayne “The Rock” Johnson. 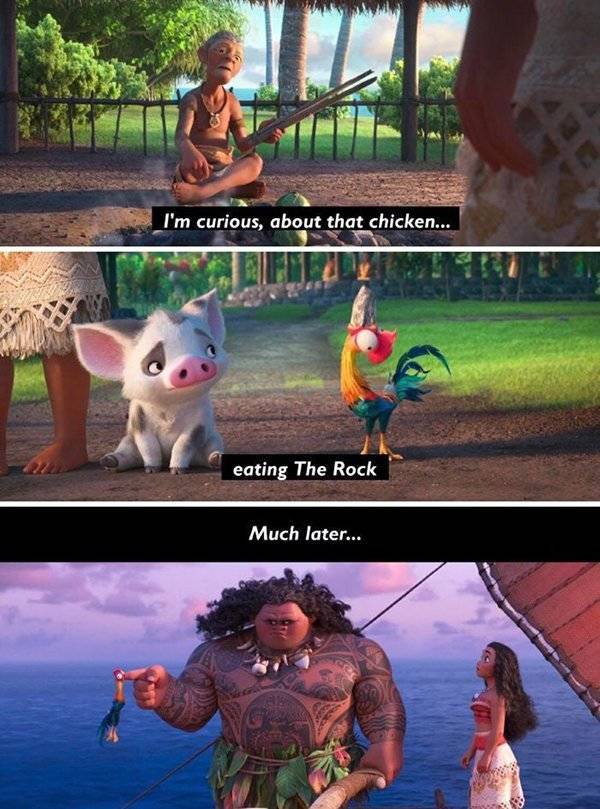 Early on in the film, Red calls Andy’s plan a “[email protected]#tty pipe dream,” and as it turned out, that’s exactly what it was. Part of Andy’s escape required him to crawl through a sewage pipe. 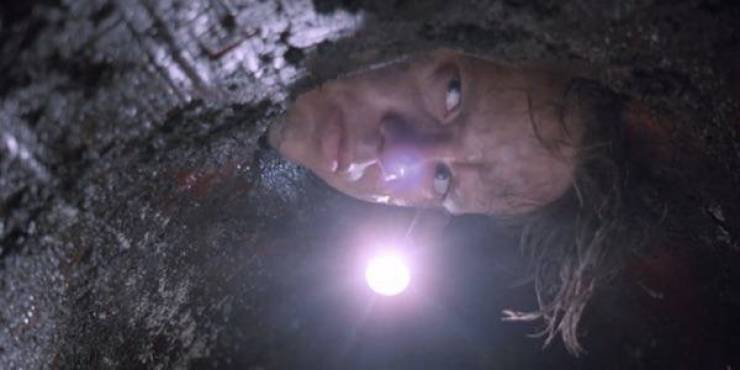 During the Bohemian Rhapsody scene, Mike Myers and Dana Carvey are actually both grimacing in pain while headbanging because it took five hours to shoot.

Offer 3 year s ago
#29 Why can't you guys have the balls to write the word sh*tty ?
Reply