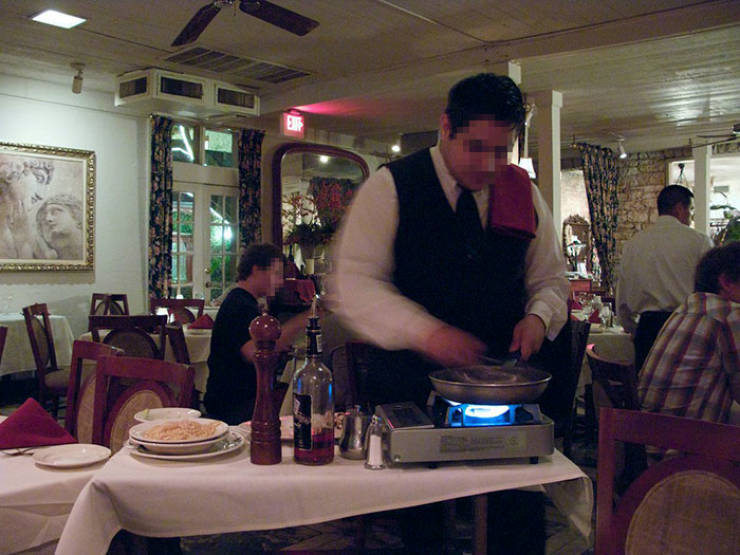 600 dollars. That’s the bill a pair of indulgent chads racked up by drinking endless glasses of the jaw-droppingly expensive Johnnie Walker Blue whiskey and buying pricey wine for girls. The duo spent the entire evening whining about everything, from not getting enough bread to slow service. Not only that, they looked down on the restaurant’s servers, rubbed their ‘superiority’ in their faces and showed just how arrogant they really were.

When the time came to pay the piper, the company’s boss couldn’t believe his eyes because the bill was way bigger than what he could have imagined. The waiter who posted this story online revealed to him that he was bullied into bringing the two jerks whatever drinks they wanted. They’d told the waiter it was their party and that anything they say goes.

The boss wasn’t impressed and called the pair out on their greed, publicly humiliated them and made them pay for the entire outing, which came up to a staggering 3,000 dollars. Not only that, but he told the waiter to raise the gratuity from 18% to 25%. Can you spell ‘awesome’? Because that’s what this boss is.

According to the waiter, the people at the company party were definitely “dressed nice”: “I believe he [the boss] was their father and it was a family business, hence why he could make them pay.”

The waiter from Texas exclaimed that their number one rule for dealing with wait staff would be: “Don’t mess with people who serve you your food.” They also suggested that they had a lot more stories to tell everyone in the future: “I will be posting quite a few in the next couple of months, once I have time to type them.”

A waiter revealed exactly what happened that evening, as well as how it ended 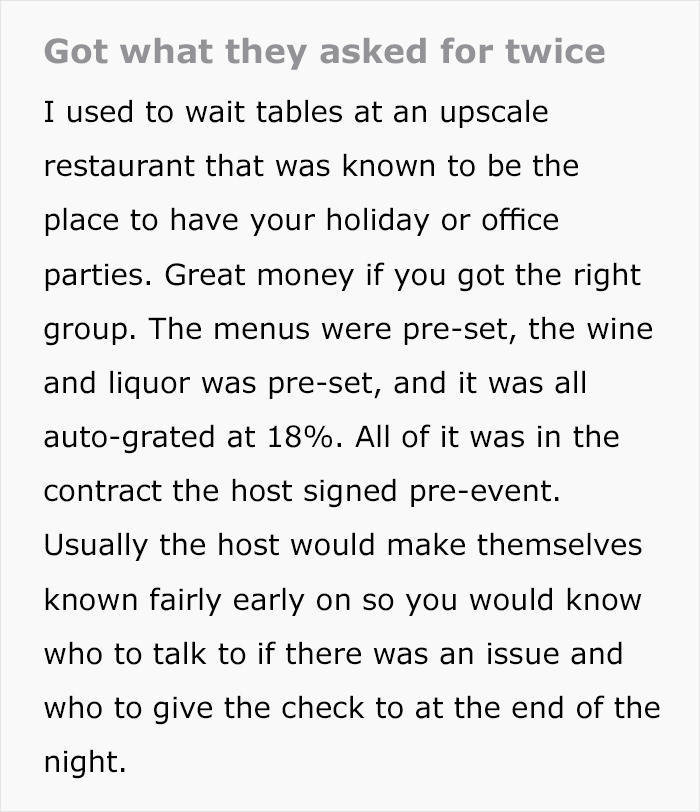 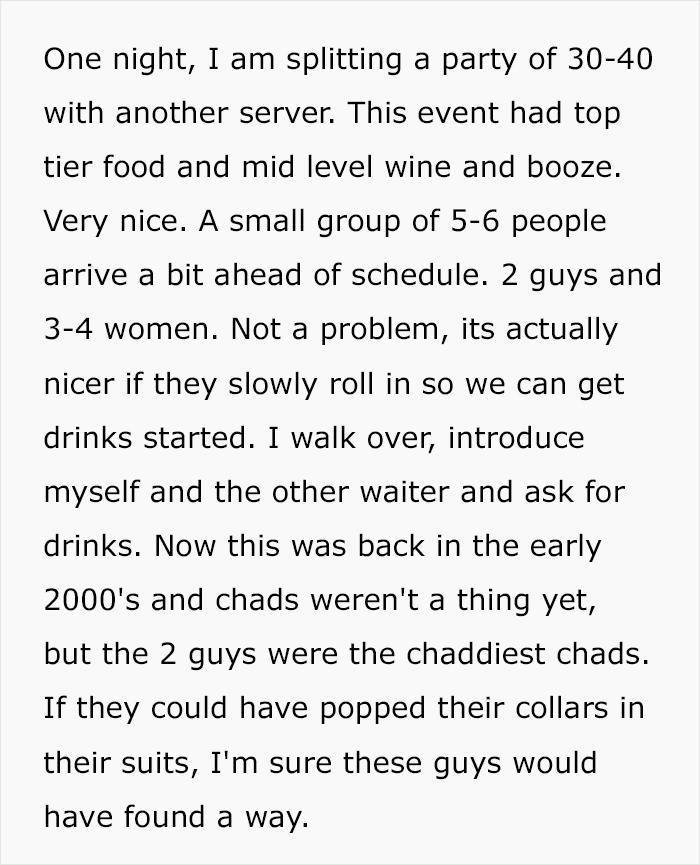 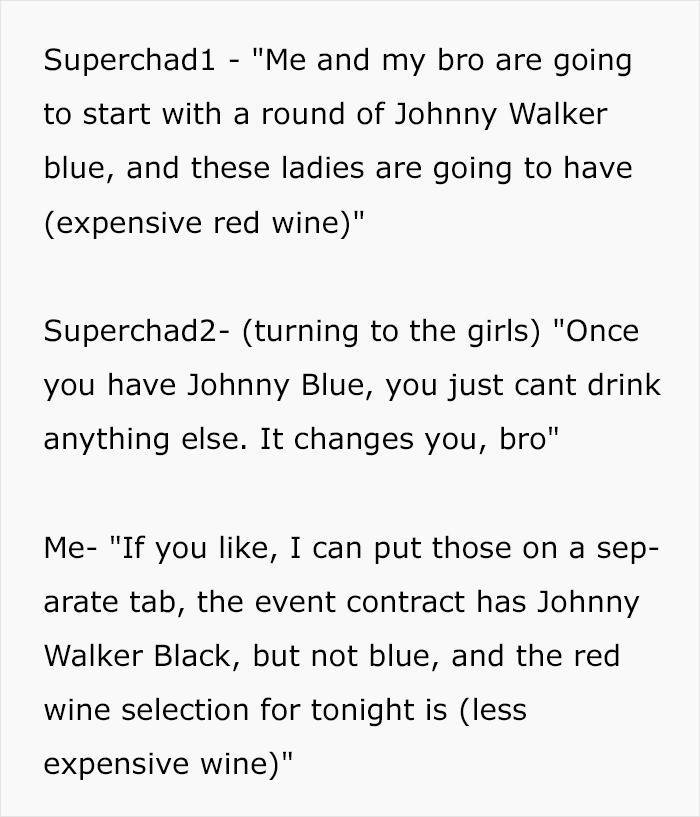 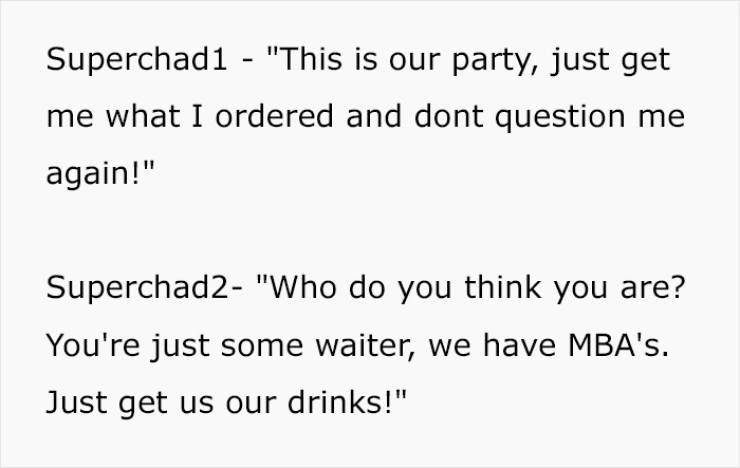 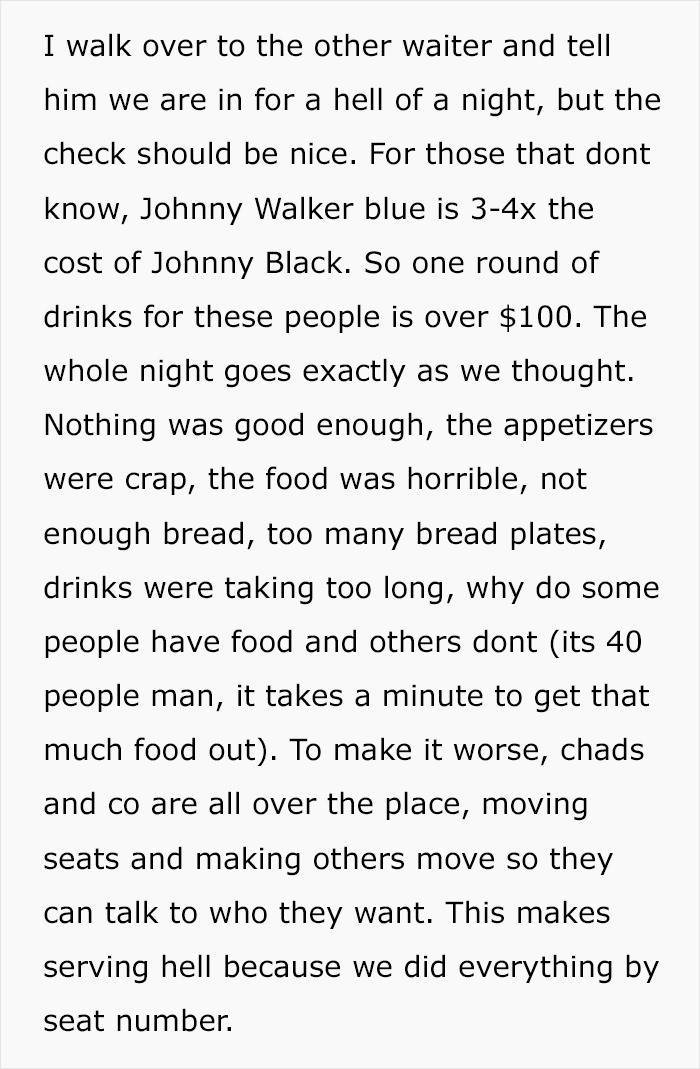 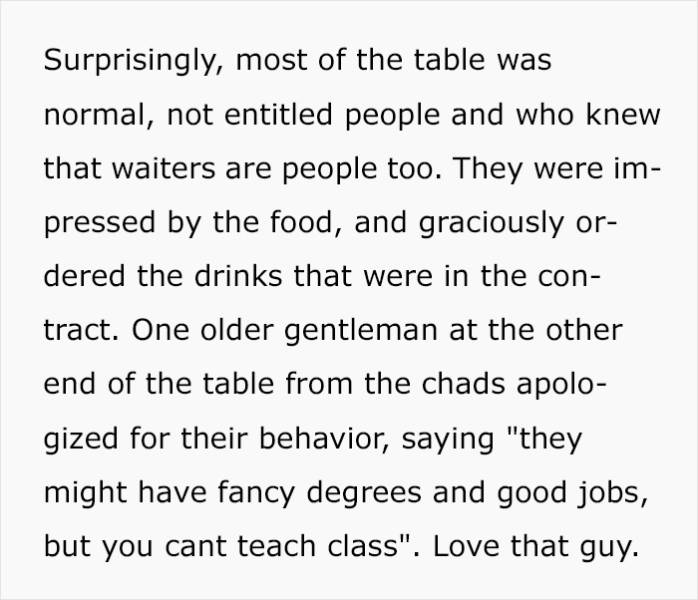 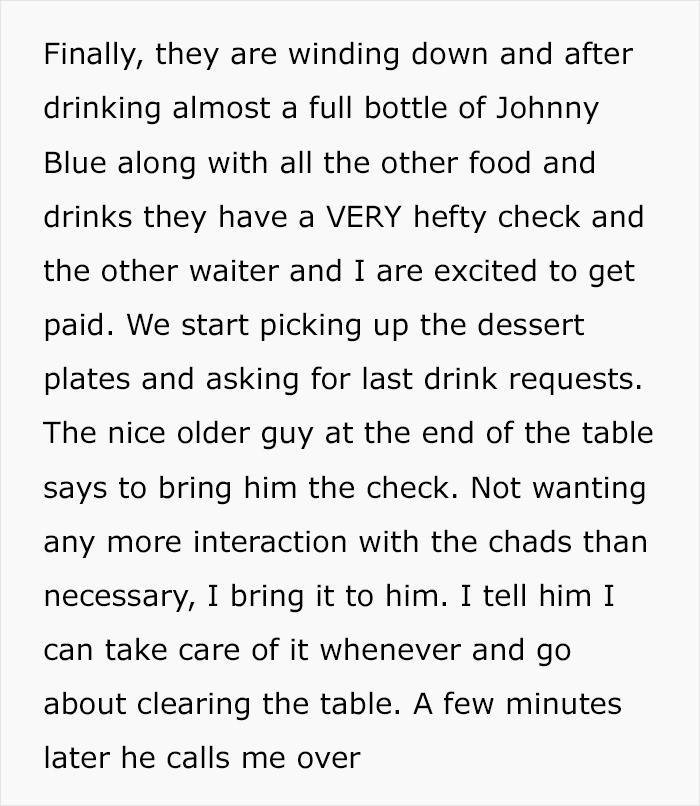 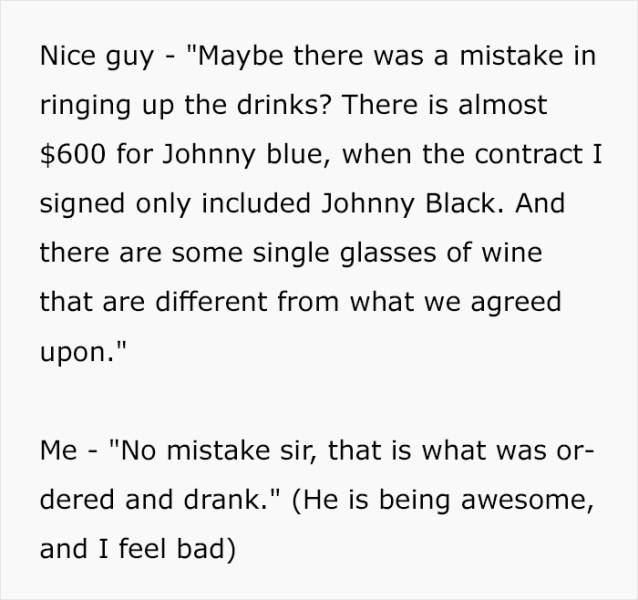 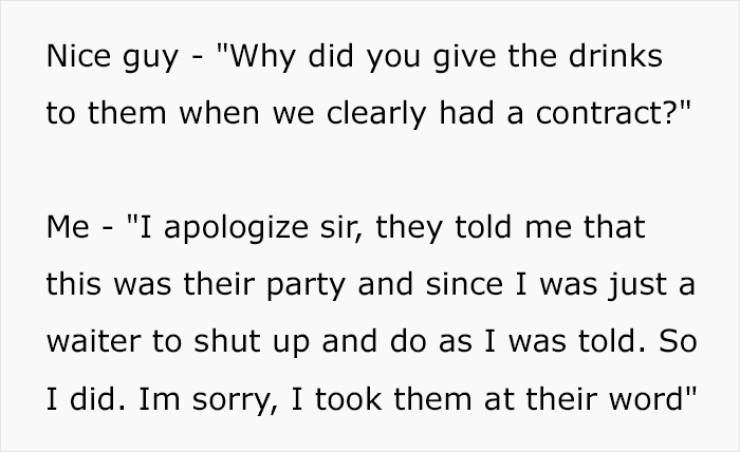 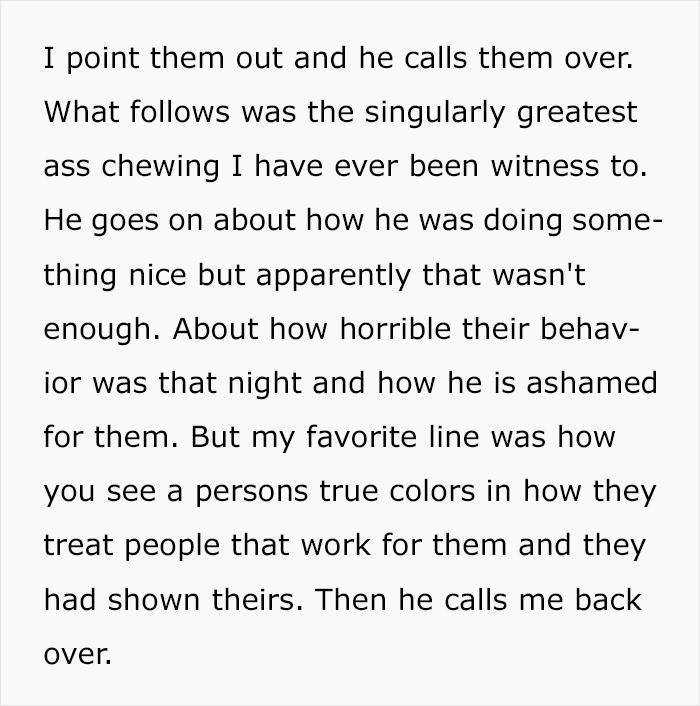 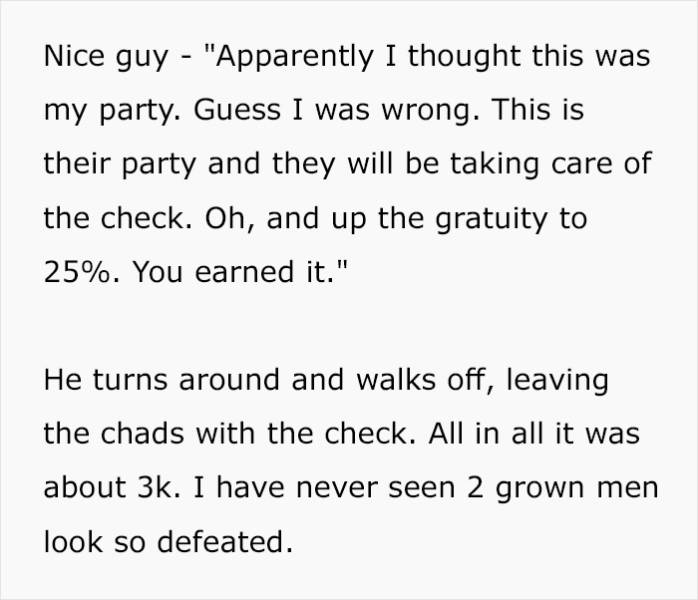 If you’ve ever worked in the service industry then you’ll know that some customers are far from delightful, as plenty of waiters would love to tell you. But even the people who think they’re being exemplary patrons have a thing or two to learn.

Vice collected advice from waiters who explicitly stated how they’d like to be treated by customers. For example, Anne hates it when customers try to get her attention by screaming her name across the restaurant. Meanwhile, all that Lisa wants is a tiny bit of politeness, like saying ‘hello’ back to her when she introduced herself. Sam’s biggest pet peeve at work is hearing customers mutter comments about his tip if anything goes wrong. Sounds simple, doesn’t it? If only the two chads had the sense not to throw their weight around, their wallets might be a lot fuller than they were before.